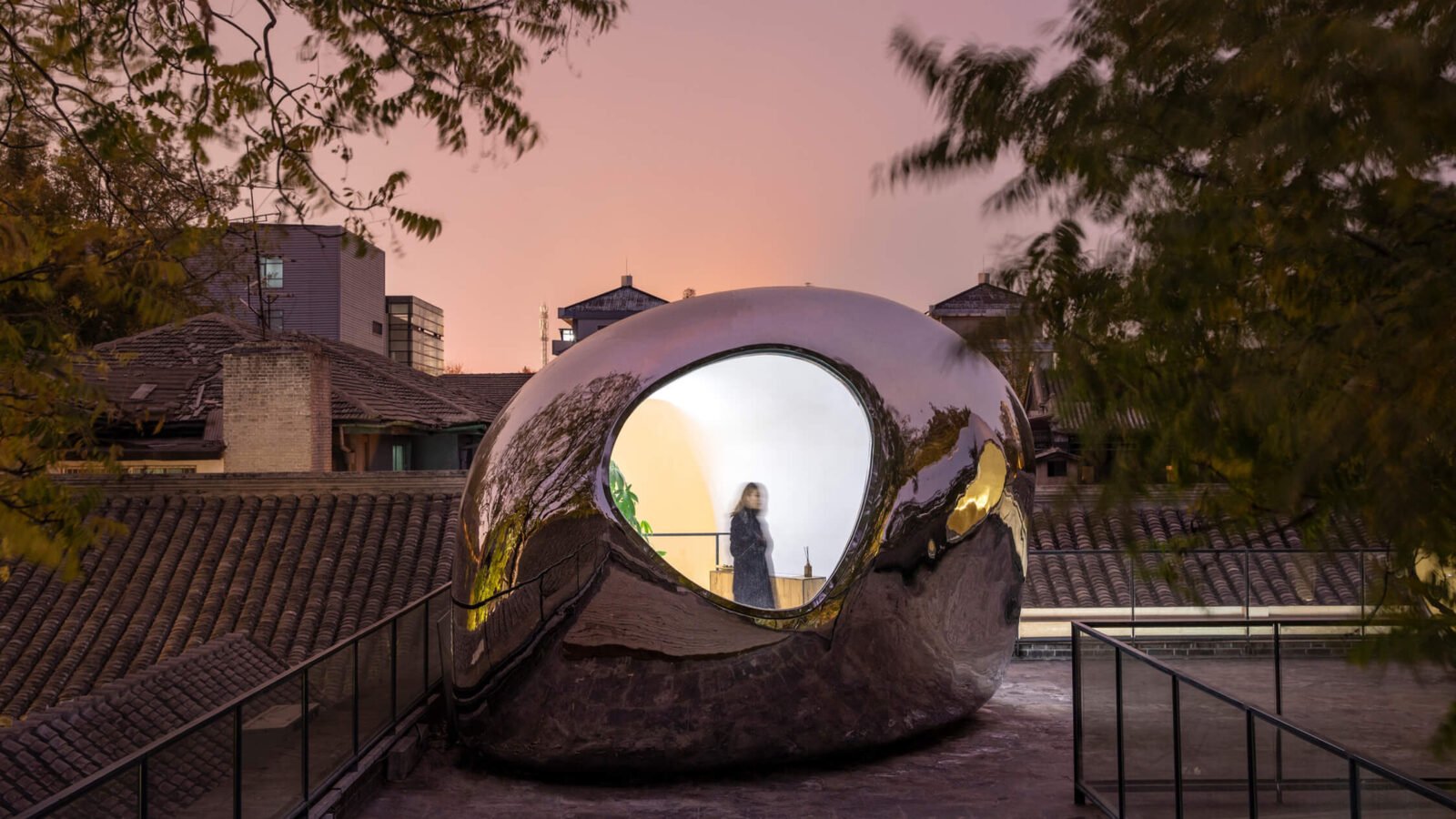 Two mirrored forms reshape and restore an existing courtyard house to explore the future of the hutong.

Since the late 20th century, northern China’s traditional urban neighbourhoods – known as hutongs – have witnessed a visible decline in favour of an increasingly modern landscape. The once prominent courtyard houses are rapidly being erased, particularly in Beijing. It’s an unsettling trend that Ma Yansong, the designer at the helm of local studio MAD Architects, has been working to combat for over a decade.

At 2006 Venice Biennale, the firm exhibited the project Beijing 2050, which presented “alternative scenarios” for the city in the wake of social and economic forces influencing its architectural form. Included prominently was the Future of Hutongs – a conceptual proposal that featured a series metallic bubbles emerging from the traditional dwellings that create this distinctive streetscape. A built project was realized in 2009, with Hutong Buble 32 introducing a mirrored bubble – housing a bathroom and staircase – to a historic home. A decade later, MAD’s more ambitious sophomore effort Hutong Bubble 218 inserts itself into Beijing’s urban fabric.

Just off Xidamochang alley, near such landmarks as the Forbidden City and Tian’anmen Square, the 469 square-metre project sees the studio not restore the abandoned courtyard house and introduce two undulating polished metallic bubbles that bridge the interior and exterior.

Built in the late 1800s to house Beijing’s first international hospital and later converted into a dwelling for over 20 families, the home’s street-facing spaces on the ground floor are preserved with updated glazing added to maximize natural light within.

In the central courtyard, grey bricks were used while the structure’s dilapidated wood panelling – both inside and out – was replaced to honour the material heritage of the site. 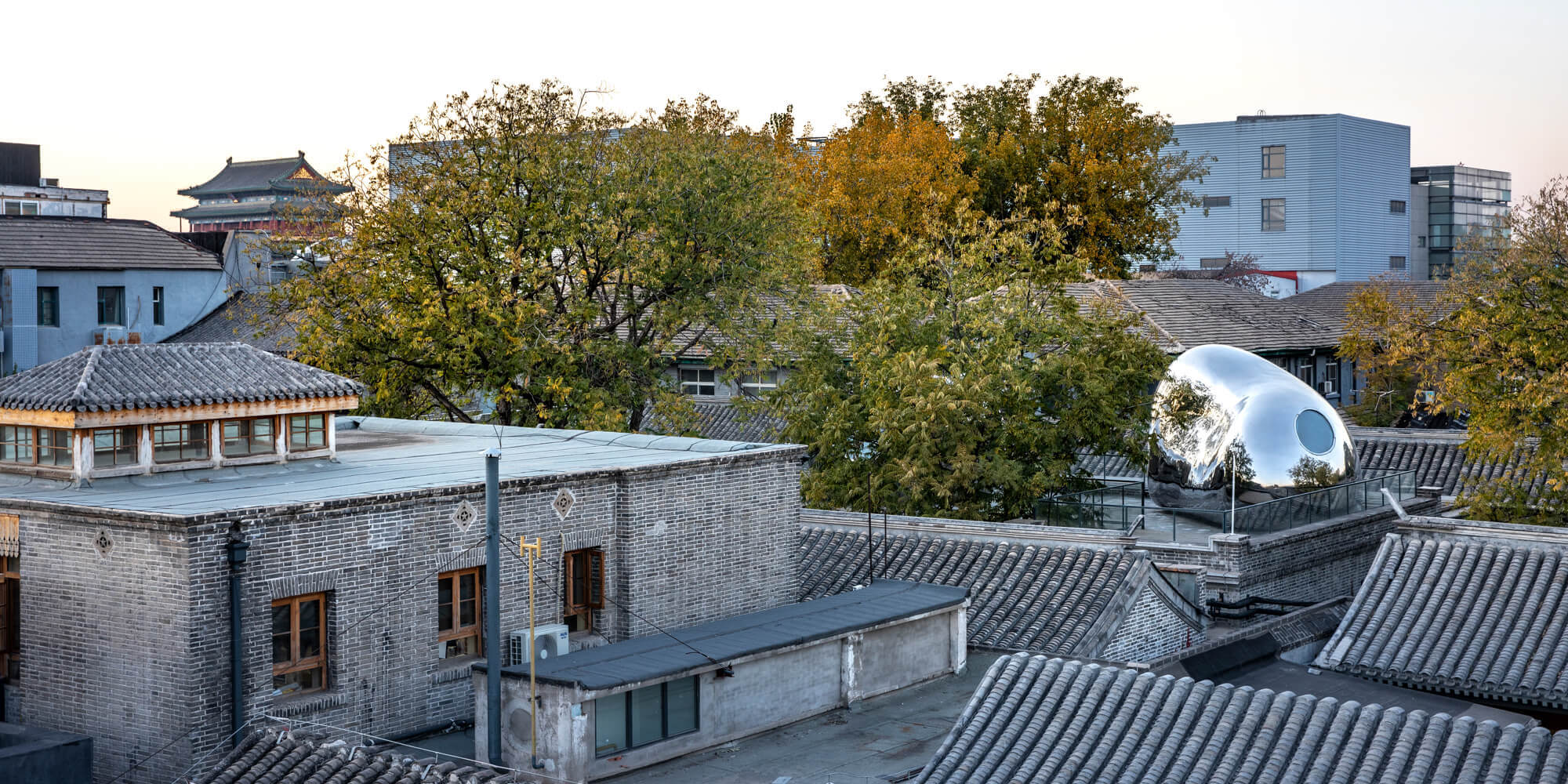 From below, the striking additions are almost invisible. Yet, upon entering the renovated site, the mirrored stainless steel forms bulge and bend within the historic envelope, almost as if they have grown out of it during its long life. One encircles a curving staircase to the rooftop, where it houses a combined meeting room and shared workspace, while the other self-contained pod “appears as if it has landed” atop the complex, says Yansong. Circular openings in the bubbles become both doors and portholes that channel views into the surrounding neighbourhood.

“I hope that these bubbles will serve as vital newborn cells,” says Yansong, “giving the traditional hutong new life, and revitalizing the community.”

Though seemingly foreign at first, these strikingly contemporary – and almost parasitic – additions contrast the historic fabric to accentuate the heritage qualities of the neighbourhood. “Through the insertion of small-scale interventions, people are attracted to return to traditional life,” says the firm, “metabolizing the old district and creating a conversation between tradition and the future, nature and humanity, expressed in a freehand artistic way.”

It’s a compelling gesture that, in marrying traditional structures and contemporary techniques, looks to preserve Beijing’s historic fabric for the future. And it reveals that demolition is far from the only option.

Two mirrored forms reshape and restore an existing courtyard house to explore the future of the hutong.