Marc Fornes Goes Residential With MaHouse
Architect Marc Fornes, known for his digitally fabricated, wildly playful pavilions, explores his other side as a builder of houses with a graceful home in Strasbourg, France. 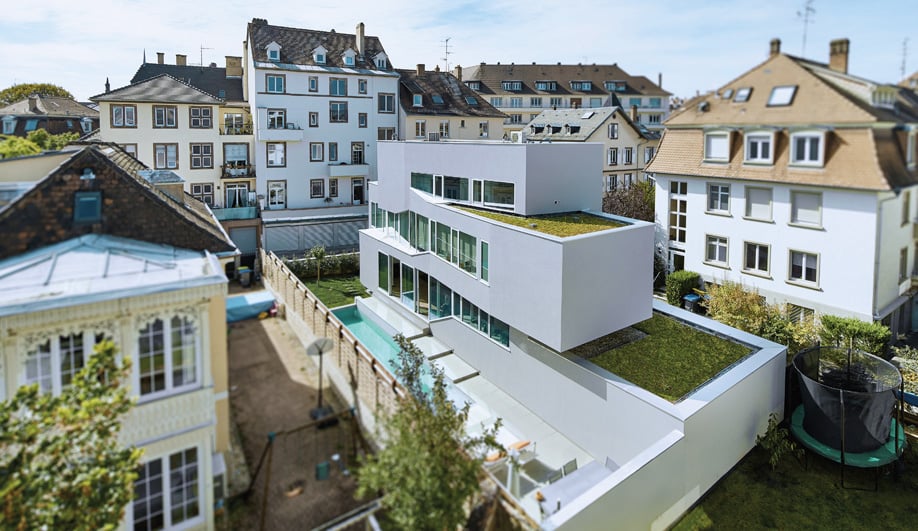 MaHouse, in Strasbourg, France, is a series of three volumes stacked slightly askew.

Architect Marc Fornes, known for his digitally fabricated, wildly playful pavilions, explores his other side as a builder of houses with a graceful home in Strasbourg, France.

Any way you slice it, architecture by Marc Fornes is dynamic, vibrant and full of life. But his methods are not as cut and dried as you might expect. For instance, no obvious route exists between the amorphous, computationally based public art for which his New York firm, Marc Fornes/TheVeryMany, has become known, and his most recent project: a gracefully sloping family house in his hometown of Strasbourg, France. Sizing up to fully realized architecture from his lauded, brilliantly hued installations – part Barbapapa, part Petri dish culture writ large – constitutes a complex transition.

Regardless, what Fornes’ clients share is a desire to escape the mundane and inhabit a space that brings joy to the everyday. With his various architectural follies – including a coralline marquee installed at Art Basel; and a Seussian pavilion in Edmonton’s Borden Park, decked in cartoon shades of pink, lime green and sky blue – the interactive experience is mind-altering, like a trip down the proverbial rabbit hole. At MaHouse, located near the rather conservative Council of Europe headquarters, it is positively countercultural. 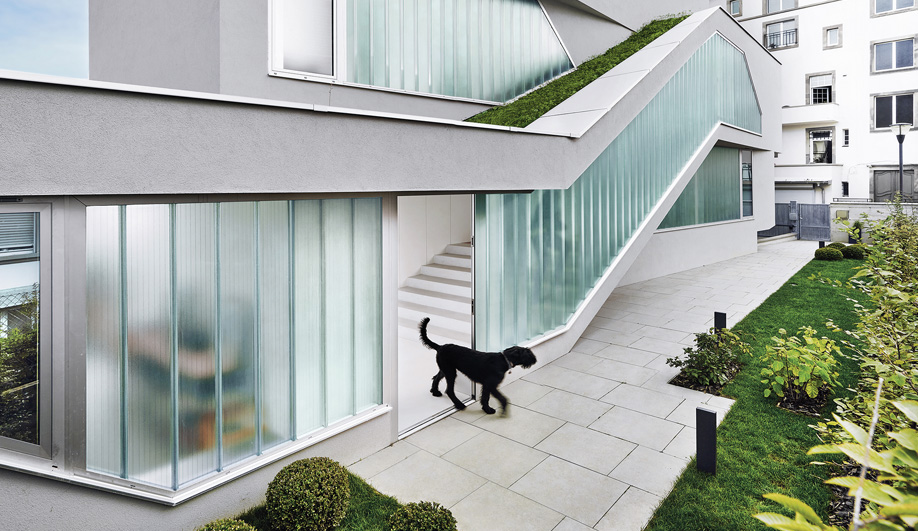 Here, the architect has stacked three long and lean volumes slightly askew, with green roof plantings to fill the gaps. A similarly elongated pool runs along one side, and a sloped underground garage takes up most of the basement. After analyzing the sun’s movement around the site, Fornes placed the deck and the pool toward the day-long sunlight, and added two continuous banks of Reglit glass cladding to the side of the house that needed to make the most of the sun. 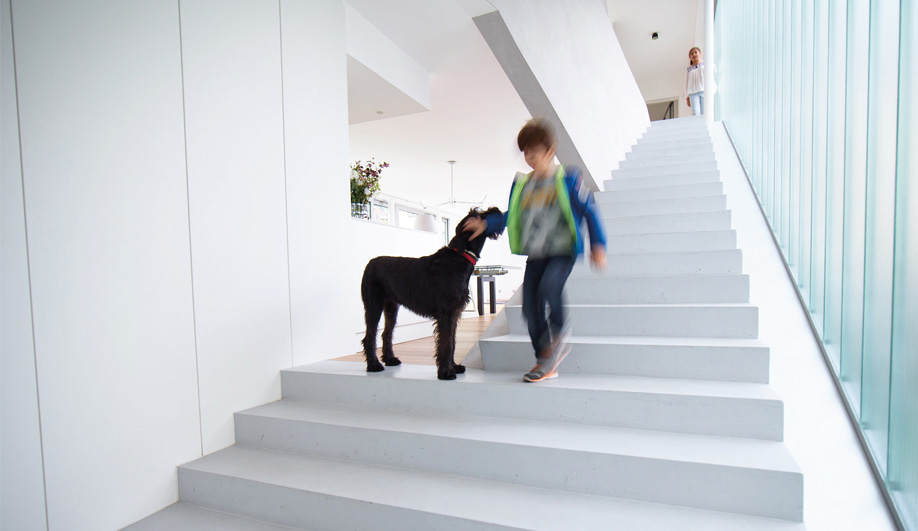 Fornes’ playful side comes out in small anomalies that “introduce the experiential to one’s daily environment.” An eight-metre-long stair transverses three levels, and a “gutter” along one side provides a perfect slide for kids.

The most radical intervention is the main staircase, which ascends two levels in a single direction, never turning back on itself as you might expect. Eschewing traditional landings, the stair is more like a promenade that leads visitors to the kitchen and dining areas at one level, then carries on to the bedrooms upstairs. Along one side, a smooth “gutter” runs down the entire eight-metre length – which, it turns out, is wide enough for a small body to slide down (luckily, the residents have two small bodies in their care).

“Through my more experimental installations, I started to discover how people understand and handle certain scales and surfaces,” says Fornes. In the house, there is a similar effect.

“If the steps are longer, or if the angles are more obtuse and the edges more oblique, people are de­stabil­ized. That’s what we’ve tried to bring to this house: the insertion of slight anomalies translates into a unique experience.” 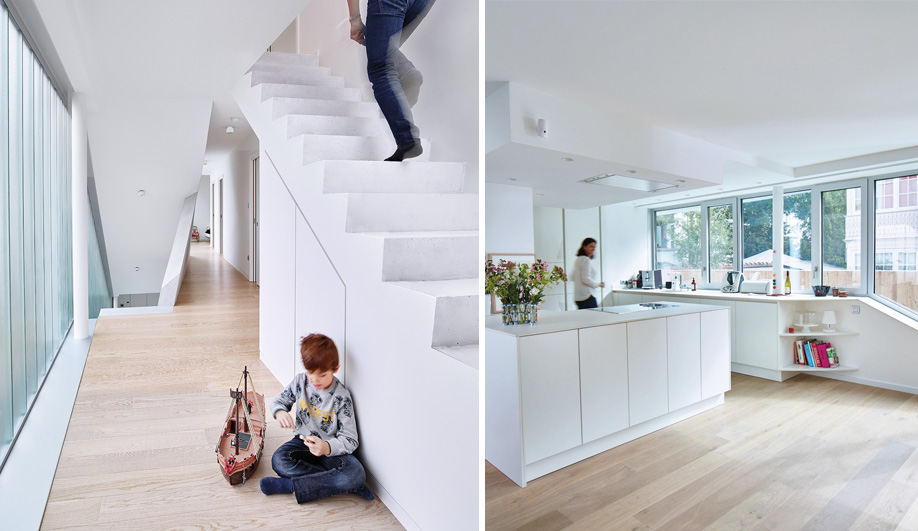 Left: The master bedroom and the ensuite bath occupy the top floor, which is accessed by a separate set of stairs. Right: The 340-square-metre house consists of four bedrooms, three and a half bathrooms, a kitchen, an office, a playroom and under-ground parking for two cars.

The transition from artwork to architecture meant abandoning his typical rounded surfaces for what he calls low oblique.

“The low oblique sees the continuity from one plane to another with a very open angle. On one hand, we’ve lost the organic curvature,” he says. “But we gain definition, transitions and subdivisions.”

The form not only defines the staircase, which is set at a leisurely 30-degree incline, but also the built-in shelving, a gradually dipping driveway, even the gentle slope of the pool. The elevational shifts mean that traversing the house never entails a steep schlep, nor a uniformly flat route.

Scaling the open stair-case enables you to survey the entire, sun-bathed house all at once. And if you can’t wait to jump in the pool, the slide will get you back down to ground level in record time. ­