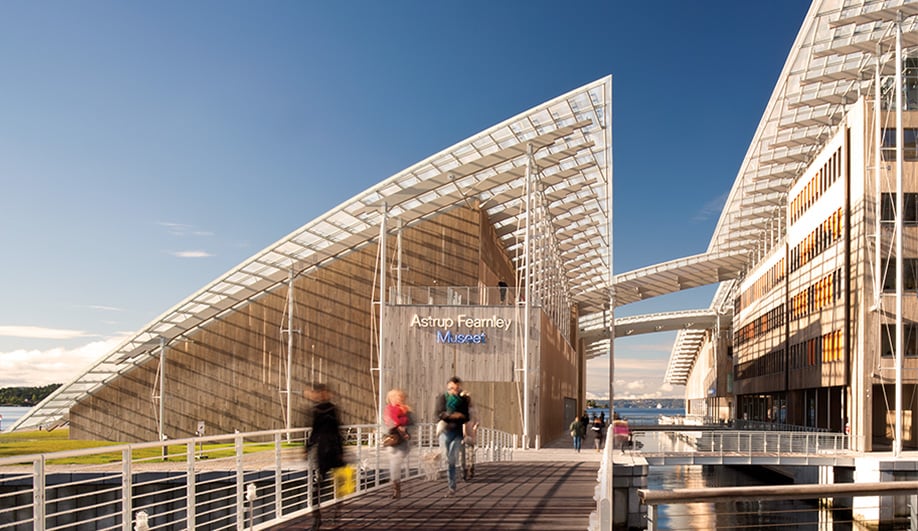 The new museum is the latest architectural destination along Oslo’s waterfront, a 10‑­kilometre area now undergoing a major redevelopment. 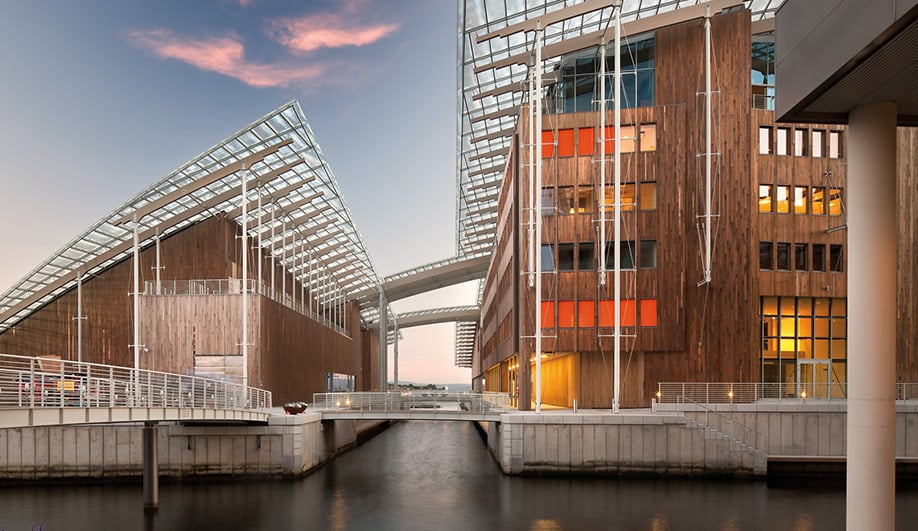 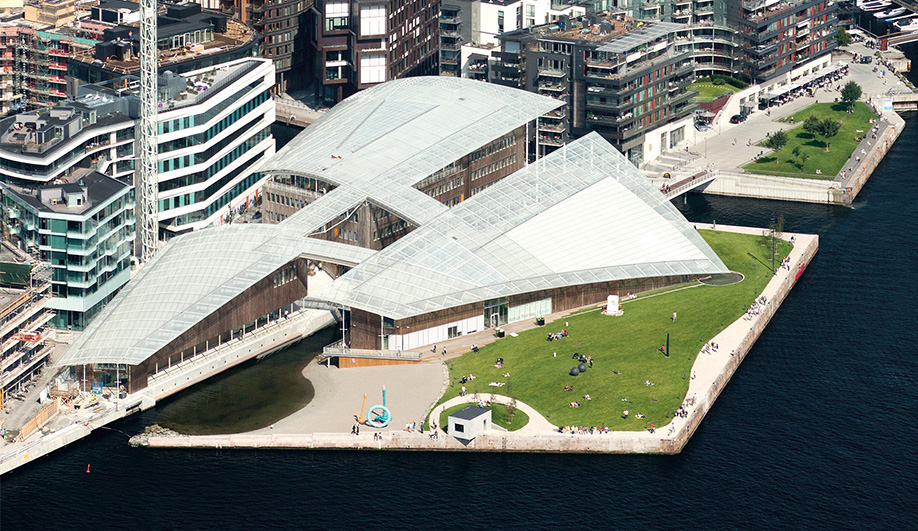 The trapezoidal glass roof curves gently, emu­lat­ing a sailboat mast caught in the wind, with one corner almost touching the ground. 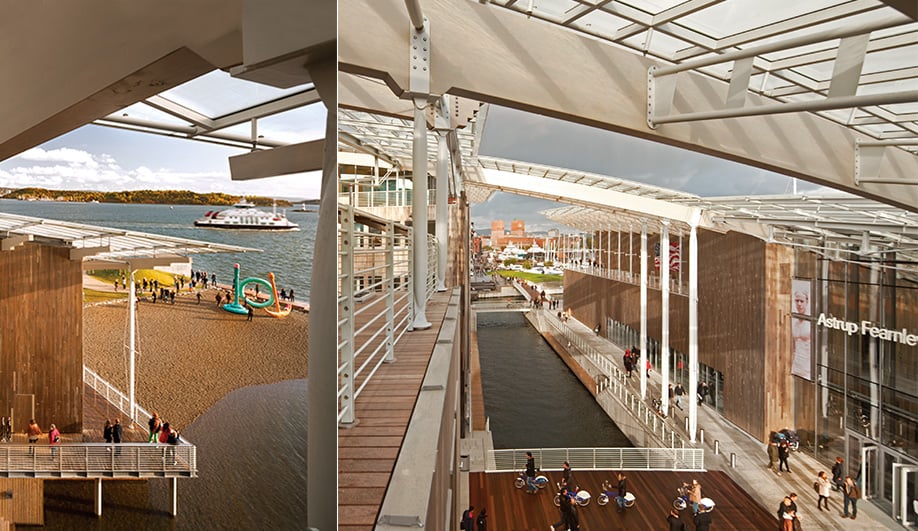 Left: The museum is surrounded by an outdoor sculpture garden and a pebble beach along the shoreline. Right: Piano’s love for exposing a building’s construction is most evident in the roof, whose laminated wooden beams are supported by slender metal columns and cable rigging. 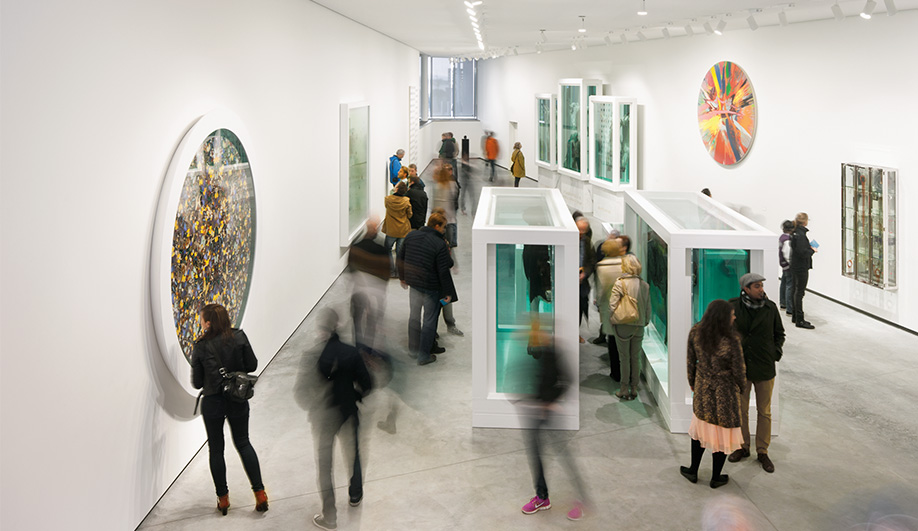 The museum houses a private collection that includes contemporary works from the ’60s to now, including many pieces by British artist Damien Hirst. 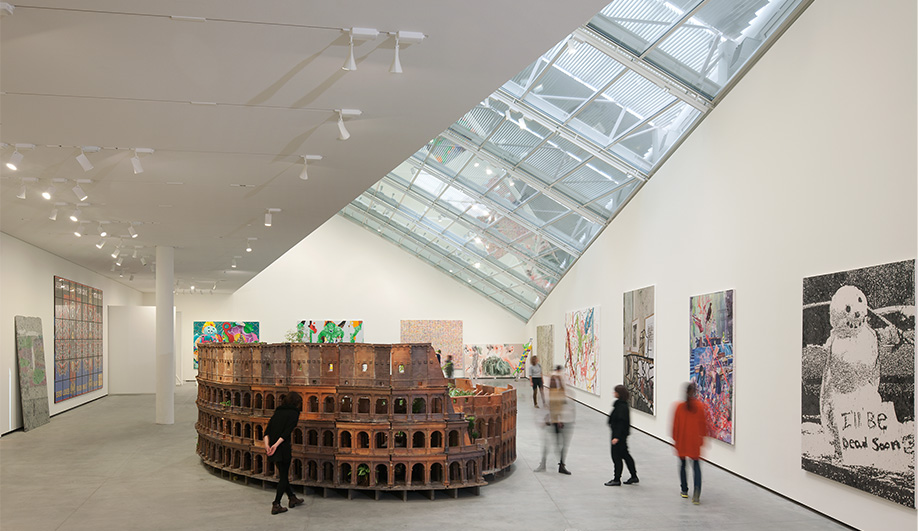 Ceramic fritting in the roof reduces glass transparency by 40 per cent. Pictured here is Huang Yong Ping’s Colosseum, on display in one of the main galleries. 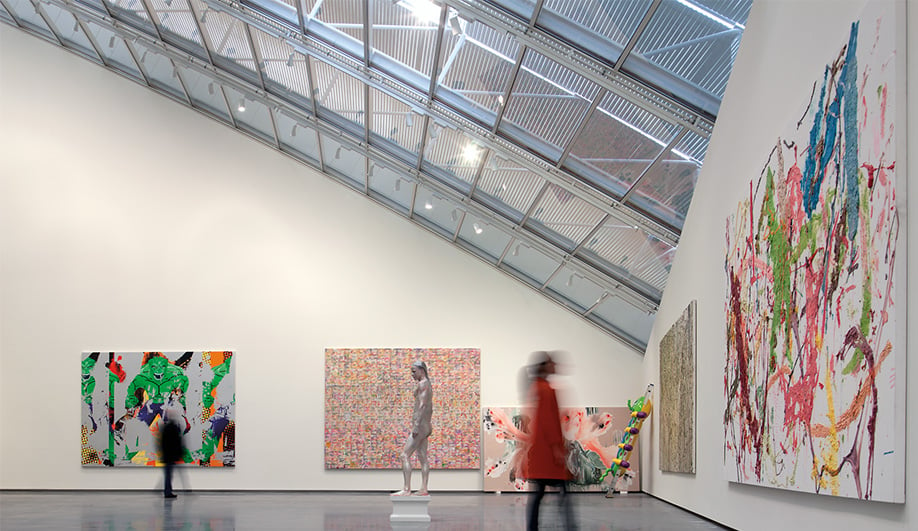 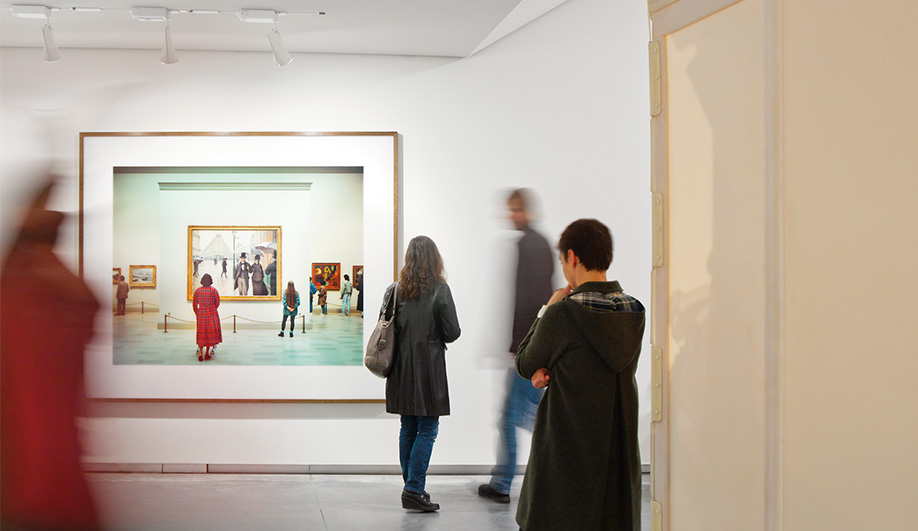 Each gallery has a different ceiling height, material palette and size, providing space for large installations as well as smaller works.

Elegantly positioned at the end of a boardwalk along the Oslo fjord, the Astrup Fearnley Museet’s giant glass and steel roof grabs your eye from afar. The double-curved structure is a section of a toroid, its ceramic fritted glass and wooden louvres extending past the building’s edges to protect two canal-side promenades that lead to a beach and a ferry terminal. It almost touches the ground near the sea, and then stretches up to shelter the museum’s entrance. Resembling a sail, a breaking wave or a bird’s wing, the roof expresses architecture in a taut lyric mode.

Visitors don’t just happen on this private museum of contemporary art by accident. They come to see the Renzo Piano Building Workshop’s first project in Scandinavia. A global superstar with offices in Paris, Geneva and New York, Piano has built museums from Sarajevo to San Francisco. “Making architecture in Oslo is not different from other cities, but the difference is the vicinity of the site and the sea, and at the same time being in an urban context,” says RPBW associate Olaf de Nooyer. The workshop’s renown has helped the new museum draw over 7,000 patrons a week since it opened to the public last fall.

Gallery-goers are also coming for the art. On display is a private collection started by the family of Norwegian shipping magnate Thomas Fearnley. The holdings reflect the influence of Hans Rasmus Astrup, who began buying art in the ’60s, and they include major works by Jeff Koons, Damien Hirst and Cindy Sherman. “We have a special concept of collecting individual artists rather than historical groupings,” says museum director Gunnar Kvaran. “That means we have three or four really major collections.”

Finally, some are coming to see the mid-term results of the Fjord City plan, a monumental vision to renew 10 kilometres of Oslo’s waterfront. The city is busy removing existing infrastructure and reconnecting the urban fabric to the sea. Snøhetta’s Oslo Opera House, completed in 2008, was the major icon that defined the quay, but still to come are a new public library; the completion of the Barcode Project, which consists of mixed-use towers designed by various architects; and the controversial Edvard Munch museum – all strung like jewels along the downtown shoreline.

Piano’s building constitutes the centrepiece of Tjuvholmen, or “thief island,” a former shipyard transformed into an upscale mix of condominiums, restaurants and commercial art galleries. Tjuvholmen KS, a partnership between the Selvaag Group and Aspelin Ramm construction companies, bought the land from the city in 2003. The developer commissioned Piano, and then approached Astrup Fearnley as prospective tenants. In other words, the museum is a public amenity built by a private company in return for development rights. “It’s an unusual model in Europe,” notes Kvaran, “but quite typical in Norway.”

In the end, the architecture reflects both the neighbourhood’s past as a port and its future as part of Fjord City. Without being too literal, the building has “all the semiotics of a boat,” as Kvaran puts it. Inside the double-height room intended for temporary exhibitions, overlooked on one side by a mezzanine gallery, Piano’s familiar high-tech, white-painted steelwork gives visitors the sense of being inside a ship’s hull. Outside, cable-rigged steel columns topped with wooden beams echo sailboat masts. The exterior is clad in aspen planks subtly rounded at the corners. Now a toasted brown hue, the wood will fade to a silvery grey with time and weathering. “Love for detail is part of our office,” says de Nooyer, who worked alongside Piano throughout the design and construction phases. “The details are developed by first designing a limited number of typical details, which are reviewed, discussed and mocked up until they are fully understood.”

Piano’s team, collaborating with Oslo architects Narud-Stokke-Wiig, proved open to dialogue. For instance, a proposal to add photovoltaic ­panels to the roof was nixed. To house the museum’s fragmented, idiosyncratic permanent collection, the designers provided galleries of diverse shapes and ceiling heights on the two floors of the long, trapezoidal pavilion. “Good lighting, especially natural light if possible, is paramount,” notes de Nooyer.

Outside, the architects integrated the existing canals, so that water divides the project into three distinct pavilions joined by two bridges. Visitors have unimpeded access to the temporary gallery, a bookstore and a café through a glazed lobby. They must go back out and across the canal to visit a second building, dedicated to the permanent collection. Surprisingly, the third pavilion is leased to a firm of lawyers. However, this tenure fits perfectly with the project’s genesis in private development. The origin also explains the art in the adjoining sculpture park: the works by Louise Bourgeois, Franz West, and Fischli & Weiss are all from the developers’ collection, not the museum’s.

If the design works, it is because, as de Nooyer suggests, it promotes quality of urban life as much as quality of architecture. Still, since the Astrup Fearnley first opened its collection to the public in 1993, the role of museums and museum architecture in tourism, investment and city building has changed dramatically. It takes a great deal of sophistication to make architecture with so much grace under such great economic pressure. “This proposition by Renzo Piano was an important achievement,” opines Kvaran. “The meeting between the collection and Piano has a resonance that will last a long time.”