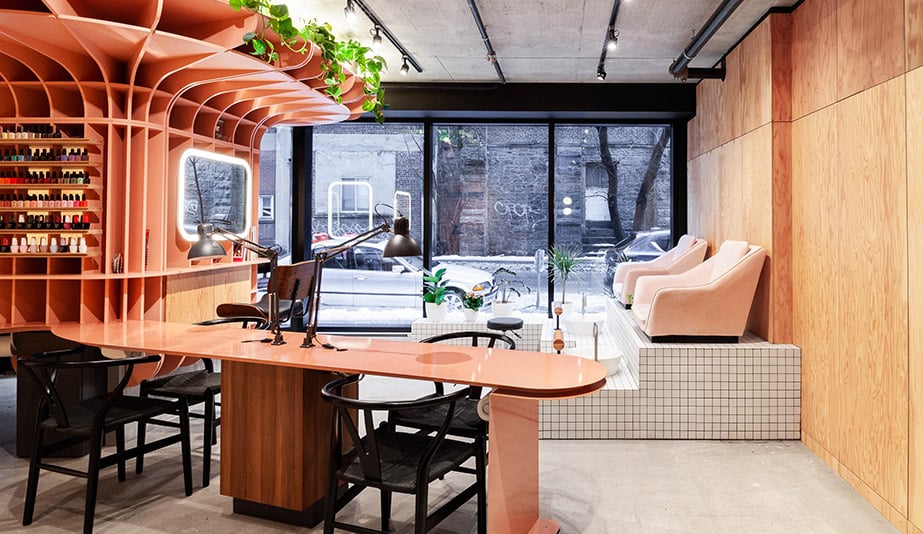 When it came to designing the interiors for Le Hideout, a beauty salon in Montreal’s burgeoning Griffintown neighbourhood, two things could have stood in the way – a centrally located concrete column and an extremely tight budget. But for local firm Ménard Dworkind Architecture & Design (MRDK), they proved more opportunity than hindrance.

“The tight budget was behind every decision of this project,” says David Dworkind, who joined forces with Guillaume Ménard in 2017 to establish MRDK (the two had previously helmed their own practices, David Dworkind Architecture and Atelier Mainor respectively). Challenged with transforming a raw concrete, glass and steel shell into a “warm communal environment” on a limited allowance, Dworkind and Ménard devised a plan that emphasizes client experience and comfort and focused on materials and details to bring the space to life.

Situated at the ground-level of the still-under-construction Lowney sur ville condo tower, Le Hideout occupies a 60-square-metre-space fronted by street-facing glazing and centred around a large immovable column. Dworkind and Ménard first addressed the concrete structure. “It was immediately obvious that the statement of the project would be the way we treated that column,” says Dworkind, referencing Frank Lloyd Wright’s Johnson Wax Headquarters in Racine, Wisconsin, as inspiration.

To conceal a network of plumbing and electrical pipes that run up the column, MRDK dressed the entire thing in a massive CNC-cut floral formation made from MDF. The covering measures 91 by 153 centimetres at its base and grows upwards and outwards as it reaches the ceiling.

Acting as a central organizing element for the salon, the reception desk and manicure stations – made from laser-cut steel – sprout vertically from this core, with makeup stations affixed to its sides.

All of these components, including the formation itself, were coated in the same cheery coral, a healthy dose of colour in the otherwise industrial space. MRDK took on the responsibility of coordinating the drawings and measurements of the required pieces before sending them to the fabricator, requiring less production time and cutting down on costs.

The pedicure station is located in a corner against the window and consists of a tile covered pedestal, two generously proportioned and pink-upholstered chairs, washbasins and custom-made footrests. All aspects here also adhere to the keep-the-costs-down policy: the seats are budget-friendly dining chairs whose legs were removed, the basic basins were sourced from Ikea, the standard 2” x 2” tiles cost approximately $3/square foot and the footrests are simple maple-wood dowels with black steel supports.

Bringing warmth throughout, clear-coated Douglas fir plywood panels line the walls of the main space, the wood grain complementing the markings found in the exposed concrete floor. Black-painted ceiling pipes, lighting, window frames and furniture punctuate the salon, providing contrast. Concealed behind the back wall are a kitchen, bathroom and spray-tan rooms.

Overall, Le Hideout has carefully crafted look, one that is both comfortable and a little edgy and perfectly in-tune with its on-the-rise neighbourhood and MRDK’s ethos.