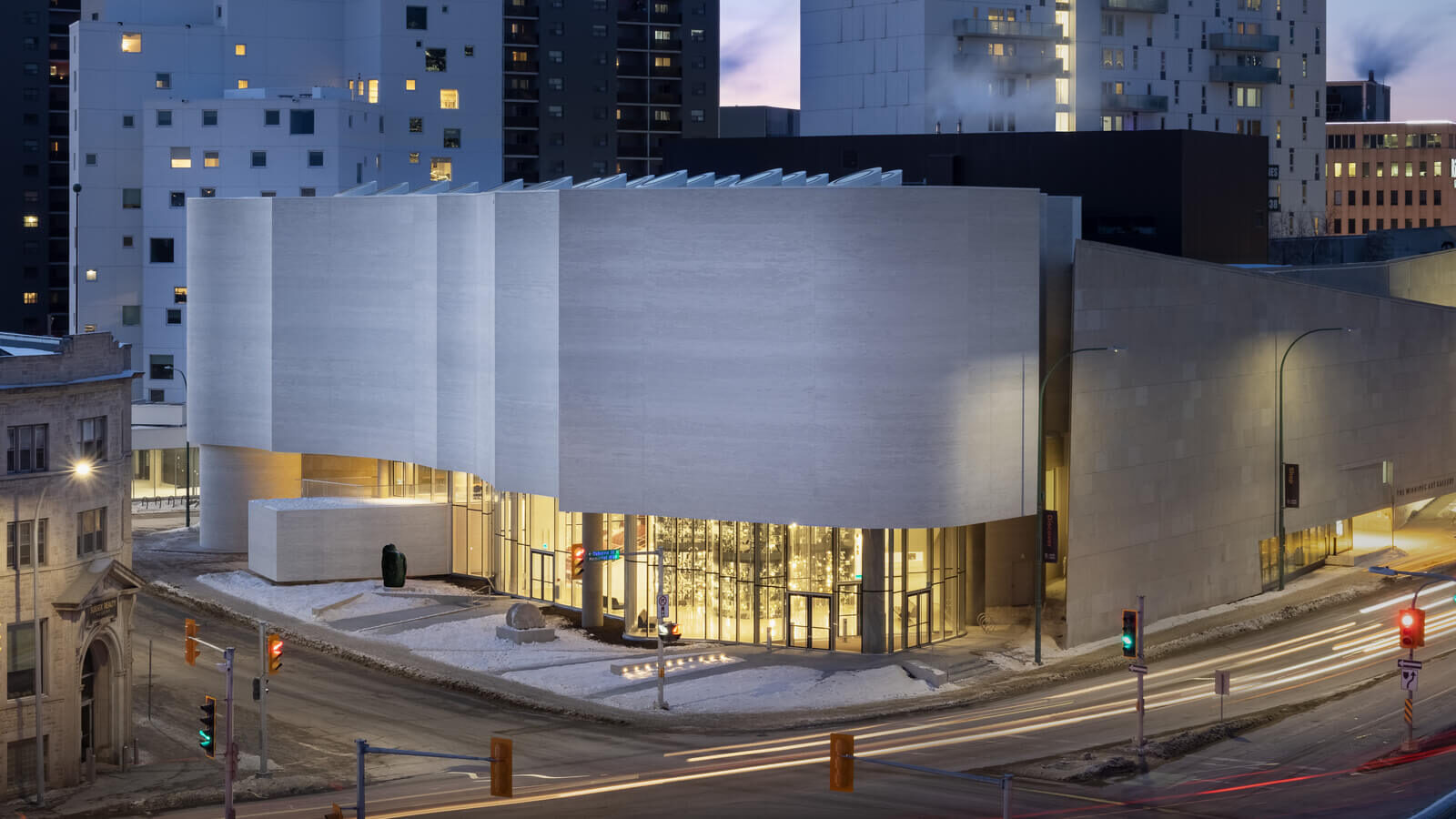 In Inuktitut, the principal language of Inuit Nunangat (the Inuit homeland stretching from the Northwest Territories to Labrador), Qaumajuq means “it is bright, it is lit.” Following an official naming ceremony in the fall of 2020, the word was bestowed on the Winnipeg Art Gallery’s new beacon — the long-awaited 3,400-square-metre addition dedicated solely to the work of Inuit artists, past and present. Now, the landmark Michael Maltzan-designed structure and the largest institution of its kind rises in the Canadian prairies, prominently claiming space in the Manitoban metropolis.

Almost a decade in the making, the commission was awarded to the Los Angeles-based Maltzan and his eponymous studio following an international competition in the early 2010s. In anticipation of the project’s development, the architect (with the WAG’s CEO Dr. Stephen Borys and photographer Iwan Baan, among others) travelled to Nunavut soon after. This experience proved transformative, with Maltzan altering his original scheme to capture the vastness, scale, light and life in the Far North as part of the design. 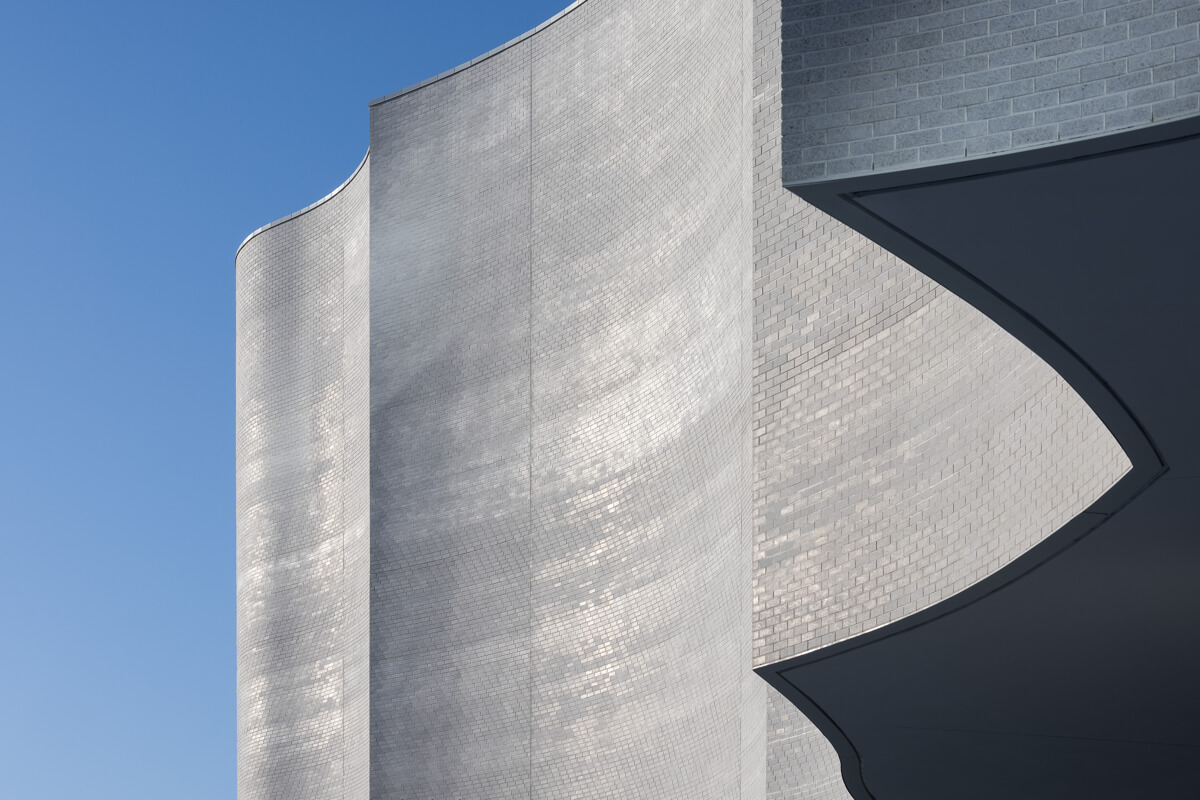 The addition of white grout between the granite modules creates a rippling effect akin to light dancing off snow.

Ilavut, Qaumajuq’s main entrance, is grounded by the three-storey vault which displays the magnitude of the institution’s collection and spans decades of artistic production.

The “scalloped and fluid forms,” says Maltzan, further the notion of this new addition and the existing building (a 1971 edifice by Gustavo da Roza) as an “assemblage.” This is further emphasized by a 1,500-square-metre renovation to the base building that connects back to Qaumajuq at each level, representing the material and metaphorical structural changes taken on by the WAG following the Truth and Reconciliation Commission of Canada’s Calls to Action. 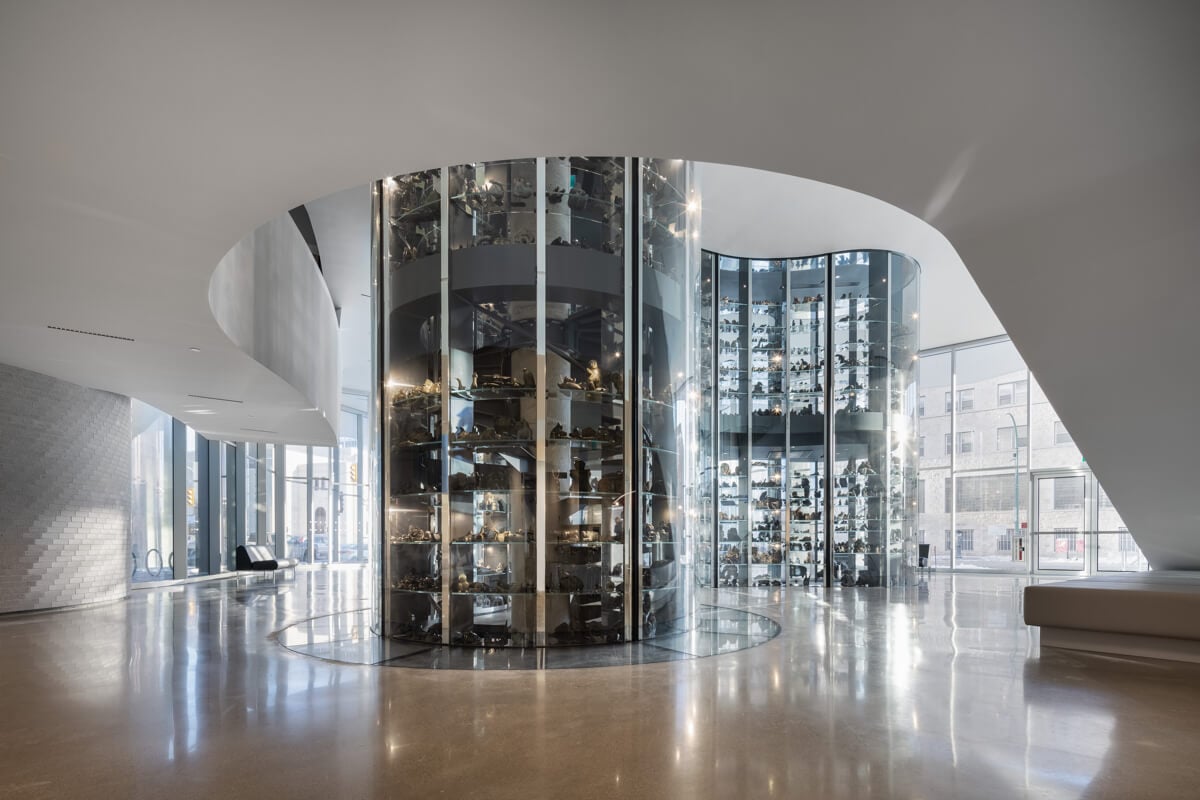 The Winnipeg Art Gallery has the largest collection of Inuit art in the world as they also hold in trust the entire collection of the Government of Nunavut. These works on now prominently on display in the soaring Visible Vault.

Central to the new space (at its “heart” according to Maltzan and a “civic amenity” according to the WAG) is the soaring three-storey vault. Echoing the convex and concave gestures of the architecture, the undulating glass-clad visible vault contains over 4,500 sculptures by artists from across the North. Extending up two storeys and below one, the vault fittingly grounds the main entrance named Ilavut (meaning “our relatives”) and prominently showcases the work of elder creatives included in the Government of Nunavut’s collection (held in trust by the WAG).

A wide range of sculptural works in a bevy of media — from serpentinite to clay — occupy the undulating space.

Yet, the transparent vault (currently the largest in the world) is not simply a display armature alone. Beyond the adjustable systems designed to accommodate future expansion as well as curatorial intervention, a conservation studio sits at the core to ensure that the stories, mores and legends embodied in the carvings and ceramic works are preserved for future generations. “The idea for the space,” Maltzan adds, “is that it is completely integrated into the life of Qaumajuq.” 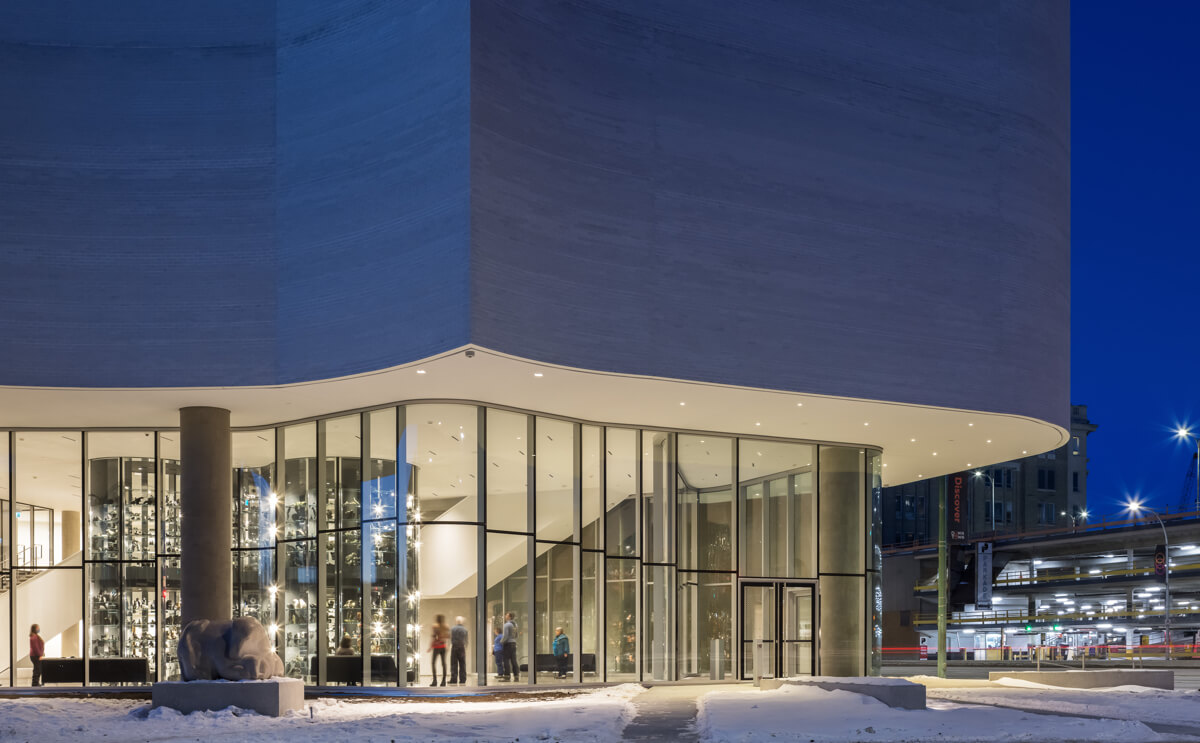 Qaumajuq’s ground floor is entirely wrapped in floor to ceiling glass to create an inviting civic presence. The new public artwork “Time to Play” by Abraham Anghik Ruben, too, welcomes visitors to the centre.

Its visibility from the street, therefore, was a key concern. Contrasting the austerity of the upper floors, the transparent street-level aspires to break down the often imposing barriers of cultural institutions, quite literally enmeshing Qaumajuq with the city of Winnipeg. Thus, many of the centre’s public programs — including the Katita cafe — occupy this area. 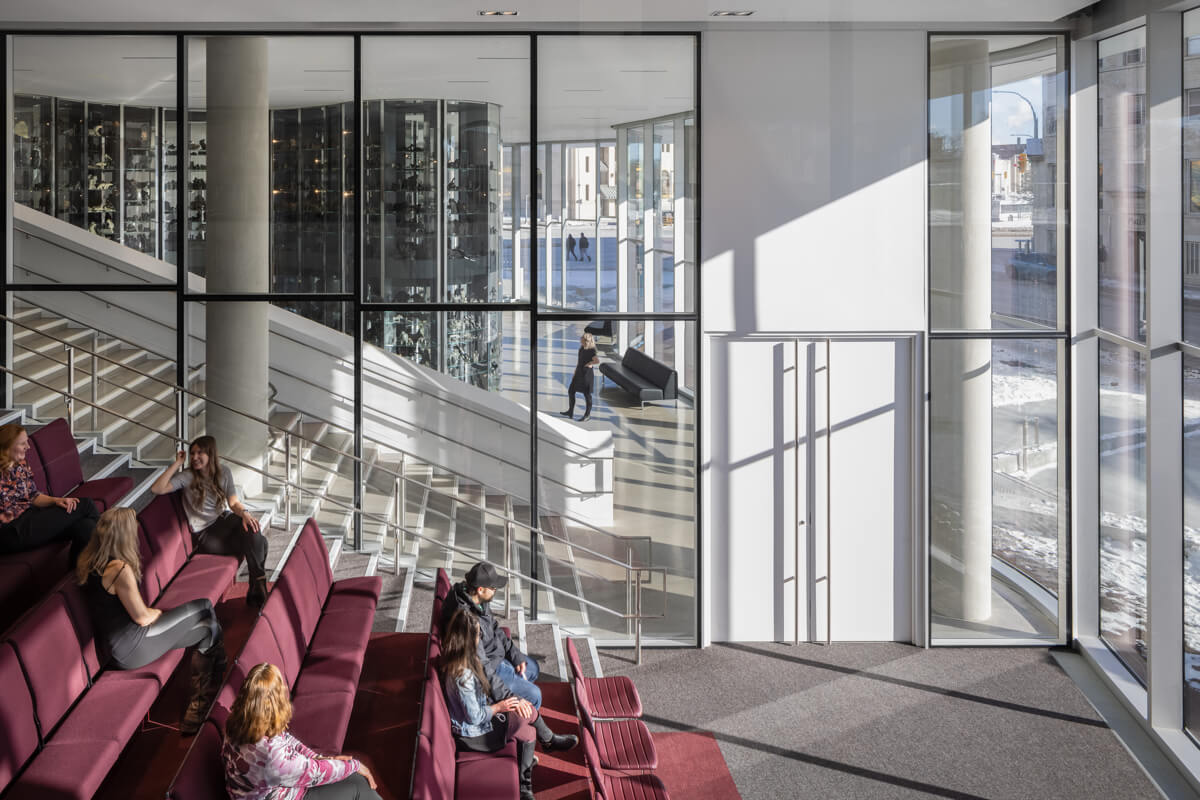 Ilipvik, meaning “a place where you can go to learn,” is surrounded by glass to connect back to the main entrance as well as the street. “In the interactive theatre,” says the WAG, “state-of-the-art technology virtually connects students, teachers, curators, artists, elders and community members.”

Also claiming prominent space on the ground floor is the stepped educational facility Ilipvik. The 85-seat amphitheatre is conceived to host a range of activities — from lectures to screenings — and features a custom curtain adorned with a printed version of Yesterday and Today (2014) by the late Elisapee Ishulutaq, a renowned artist from Pangnirtung. Here, Ishulutaq’s monumental oil stick drawing shrouds the glazed space, framing the institution’s goal of bridging North and South — physically and digitally. 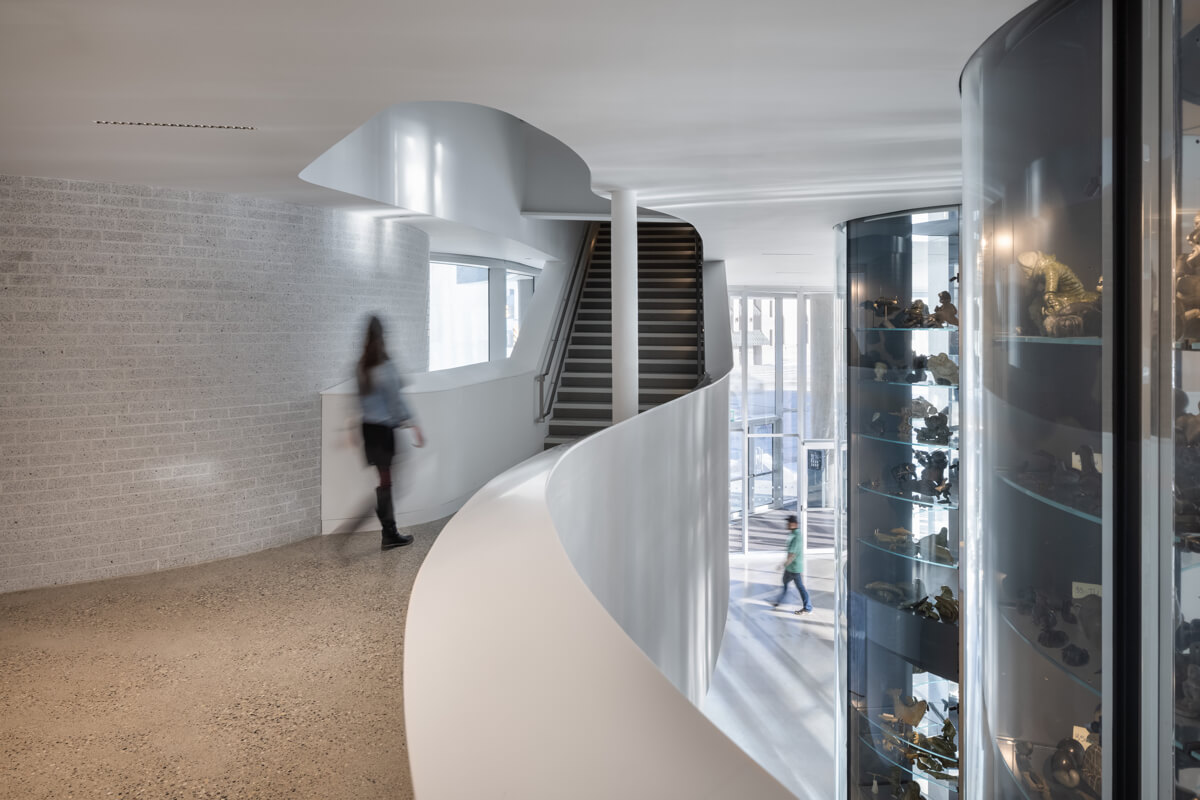 Maltzan choreographed the circulation throughout the building to allow visitors to engage with the displayed work at various levels.

Nearby, a gestural stair riffs on the scalloped forms of the exterior to connect both the entrance and the educational facility as well as carry visitors to the main exhibition hall above. Called Qilak — “sky” in Inuktitut — the 700-square-metre, double-height hall further captures the unique qualities of the North in “dynamic dialogue with the art,” according to Maltzan. Crisp white convex and concave walls frame this multipurpose space while recalling the geography surrounding many Inuit communities. 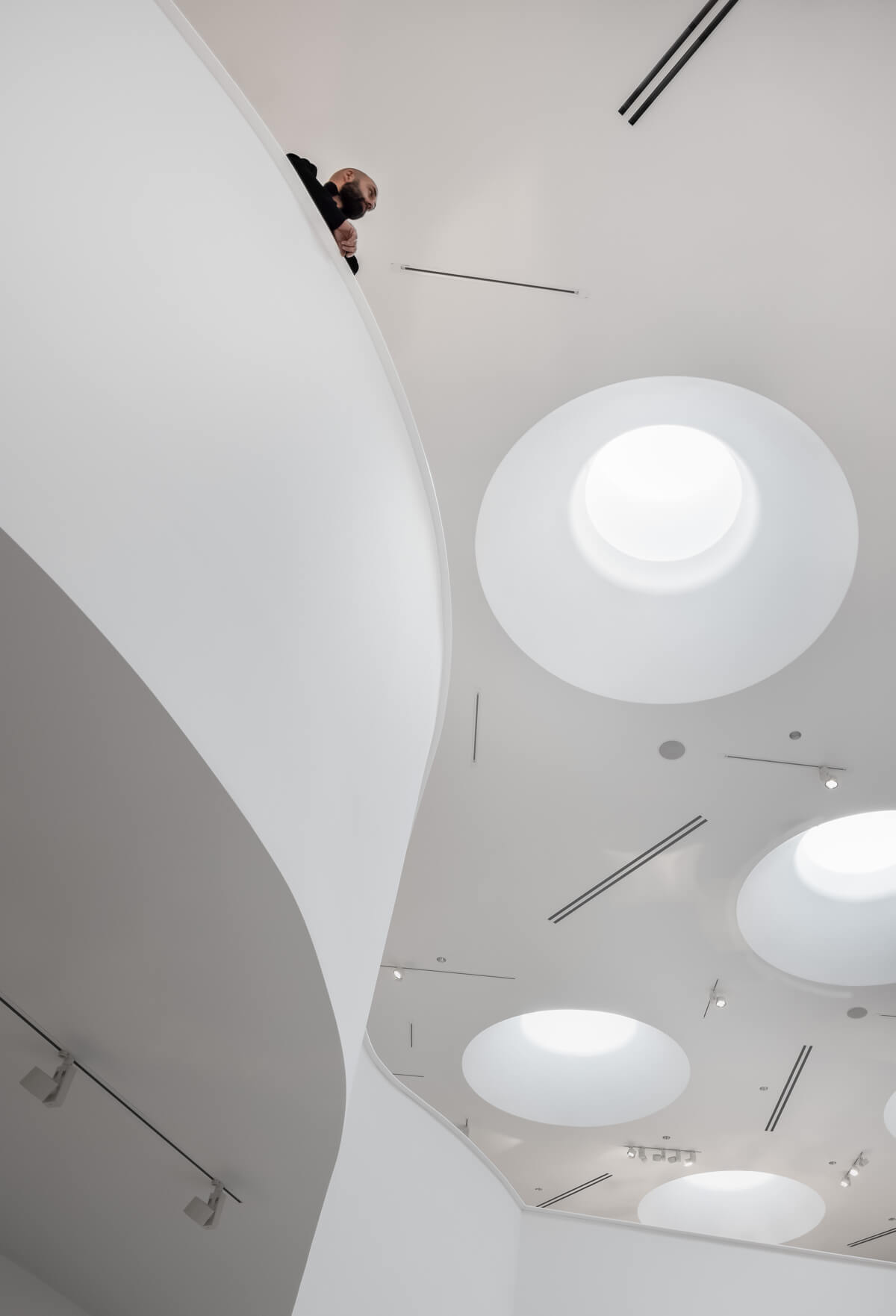 Beneath circular skylights that drive a wealth of illumination into the space and along the gently curving walls is an expansive exhibition borrowing from the “informal architecture of the Arctic,” according to curator Dr. Heather Igloliorte. An associate professor at Concordia University in Montreal and current research chair in Indigenous circumpolar art, Igloliorte led the all-Inuit curatorial team of artists Kablusiak and Asinnajaq and scholar Krista Ulujuk Zawadski in producing the inaugural exhibition “INUA.” Following a number of pandemic-related delays, the exhibition will open to the public in late March. 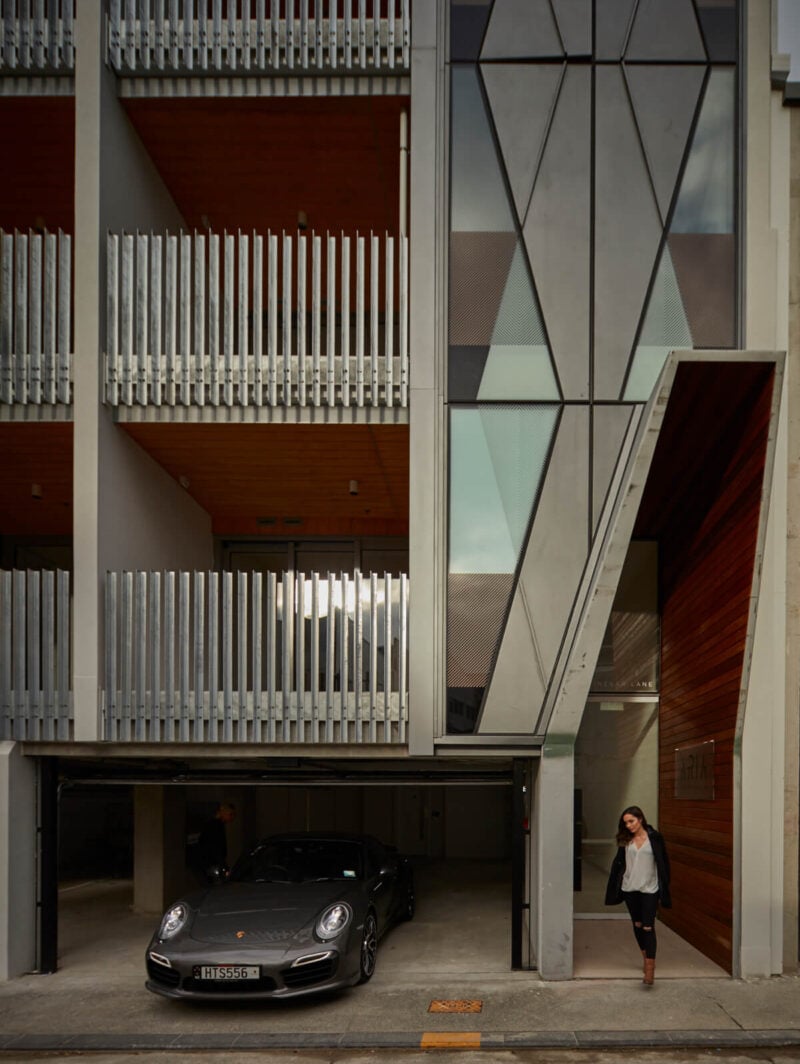 5 Indigenous Designers Breaking New Ground
From Aotearoa to Turtle Island and Inuit Nunangat to Sápmi, these designers are embracing traditional knowledge to broach the challenges of our times.
Read More

Including 80 artists from Inuit Nunangat, Greenland and Alaska, the sprawling showcase not only challenges preconceived assumptions of Inuit art by mixing drawings and sculpture with painting, digital media and even drone photography but also includes a subtle exhibition design and graphic system by two emerging Inuk designers: Winnipeg-based Nicole Luke and Toronto-based Mark Bennett, respectively. (A mezzanine gallery with a similarly sweeping profile provides an additional exhibition area above; new studio spaces and classrooms are also included on this floor.) 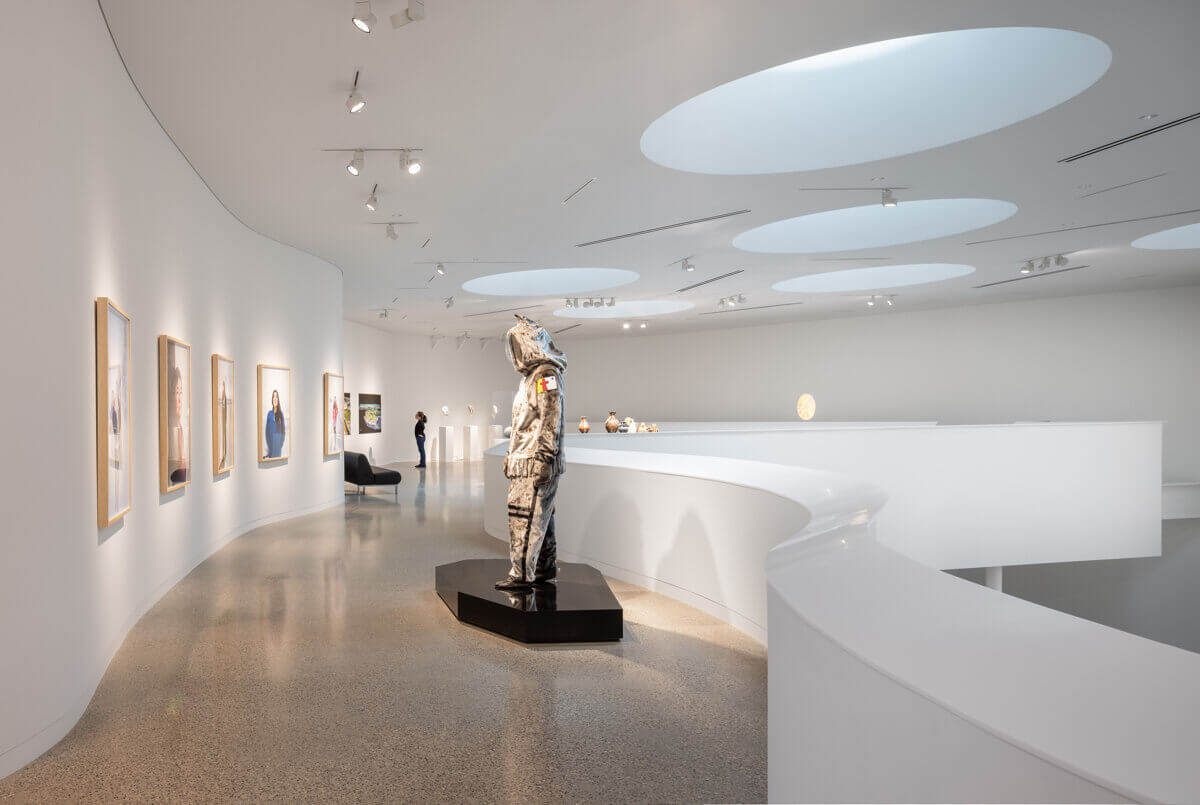 As much as “INUA” is a landmark exhibition itself, the presentation is only the first in a series of projects in which the new centre will be foundational in supporting and elevating the ever-evolving work and ingenuity of contemporary Inuit artists. While the vastness of Qilak celebrates the northern landscape, it perhaps most importantly provides a space for artists to challenge the notion of scale in their work. Though the intimate size of more traditional carvings was a response to the availability of materials and the peripatetic lifestyle of living off the land, Qilak’s infrastructure, in turn, offers a new condition that will undoubtedly shape artistic production in the years to come.

“What will happen in this building is art continuing to evolve,” Maltzan says. “And, this will likely be work that we cannot even imagine yet. That’s the thing, as an architect, I thought I had to capture.”