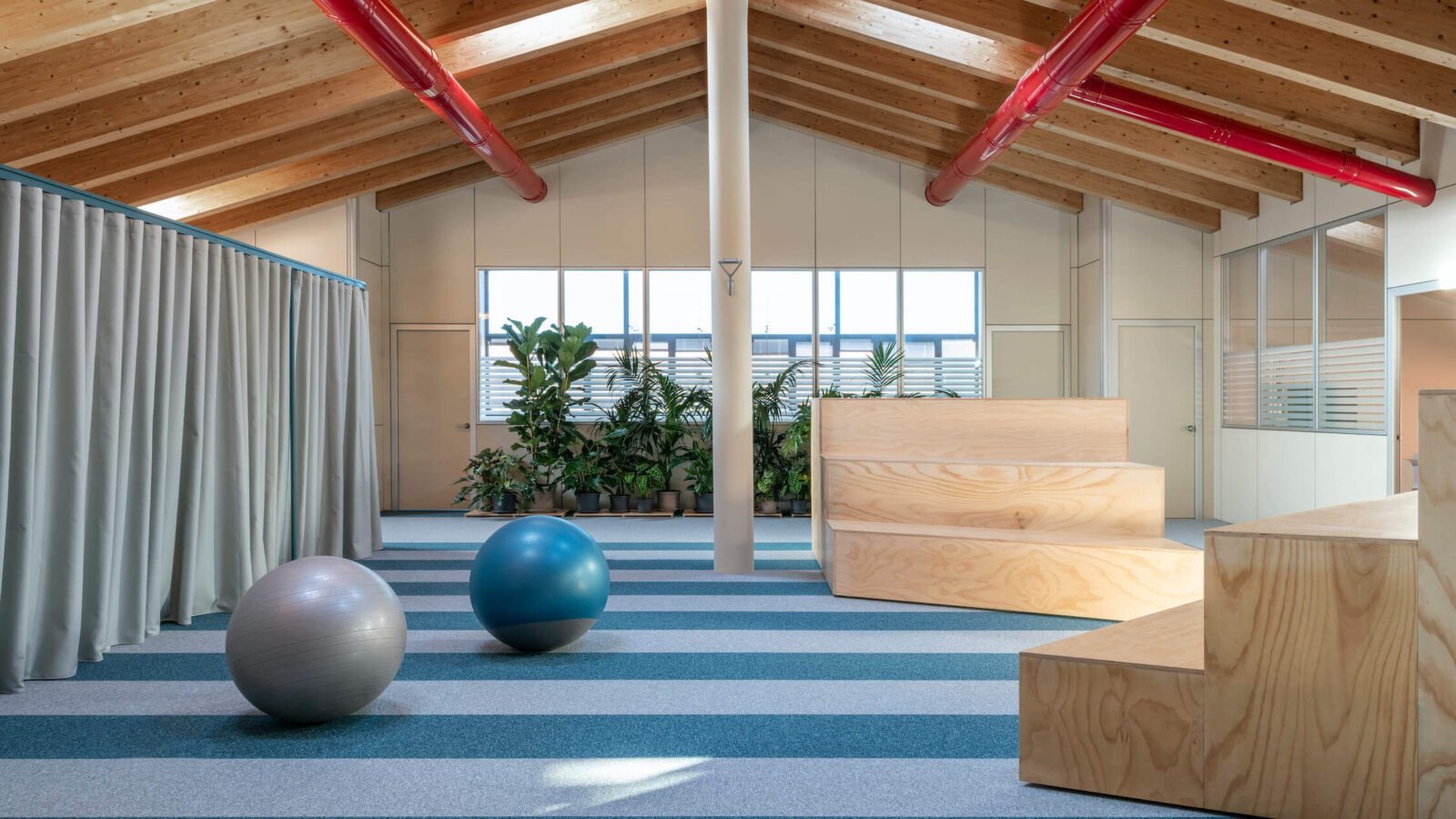 In Verona, Biophilia Brings Breathability to a Fast-Paced Startup

In an industrial corner of the medieval city, Studio Wok crafts an energetic space for tech company Milkman.

An hour’s walk south of Juliet’s famed balcony, there’s a very different Verona. Away from the romance of the city’s medieval heart, the urban landscape gives way to warehouses and modest commercial buildings. But there’s beauty here, too. Within a low-slung industrial complex, the striking new headquarters for e-commerce startup Milkman brings a surprising infusion of energy – and whimsy – to an unassuming corner of the city.

Designed by Milan’s Studio Wok, the two-storey space is immediately defined by a soothing interplay of warm natural tones and vivid plant life. As a (mostly) open workspace, the pared down industrial office is imbued with a feeling of warmth – and privacy – thanks to the strategic combination of custom-made wood partitions and greenery. 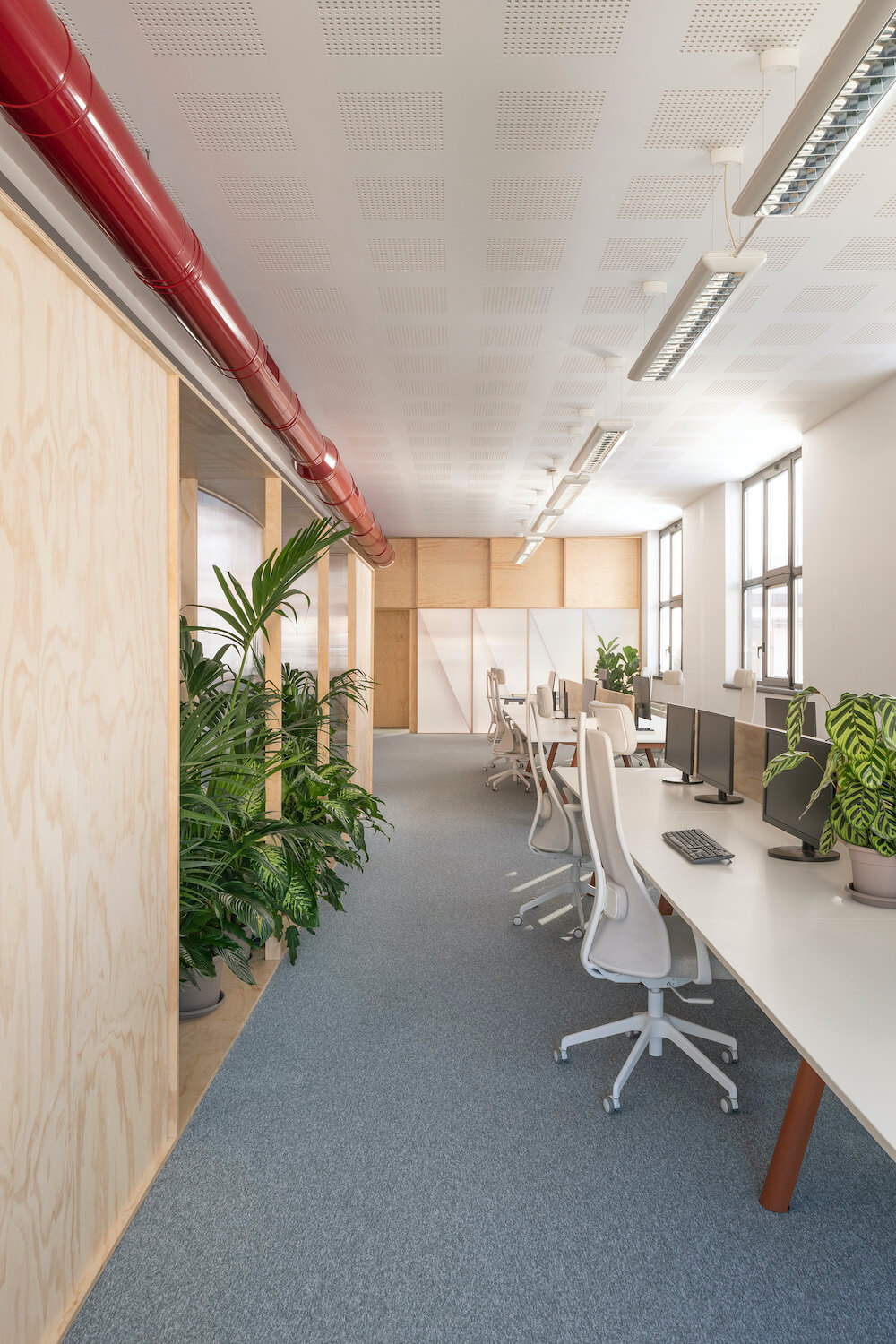 On the ground floor, a striking concave wall divides the open space into distinct zones. Elegantly contoured around the building’s structural columns, the central partition creates a sense of privacy and enclosure for the workstations that line the perimeter of the room. Framed in unfinished wood, a translucent polycarbonate finish draws the eye along the curved surface, with the view accented by a blurred glimpse of the greenery on the other side. 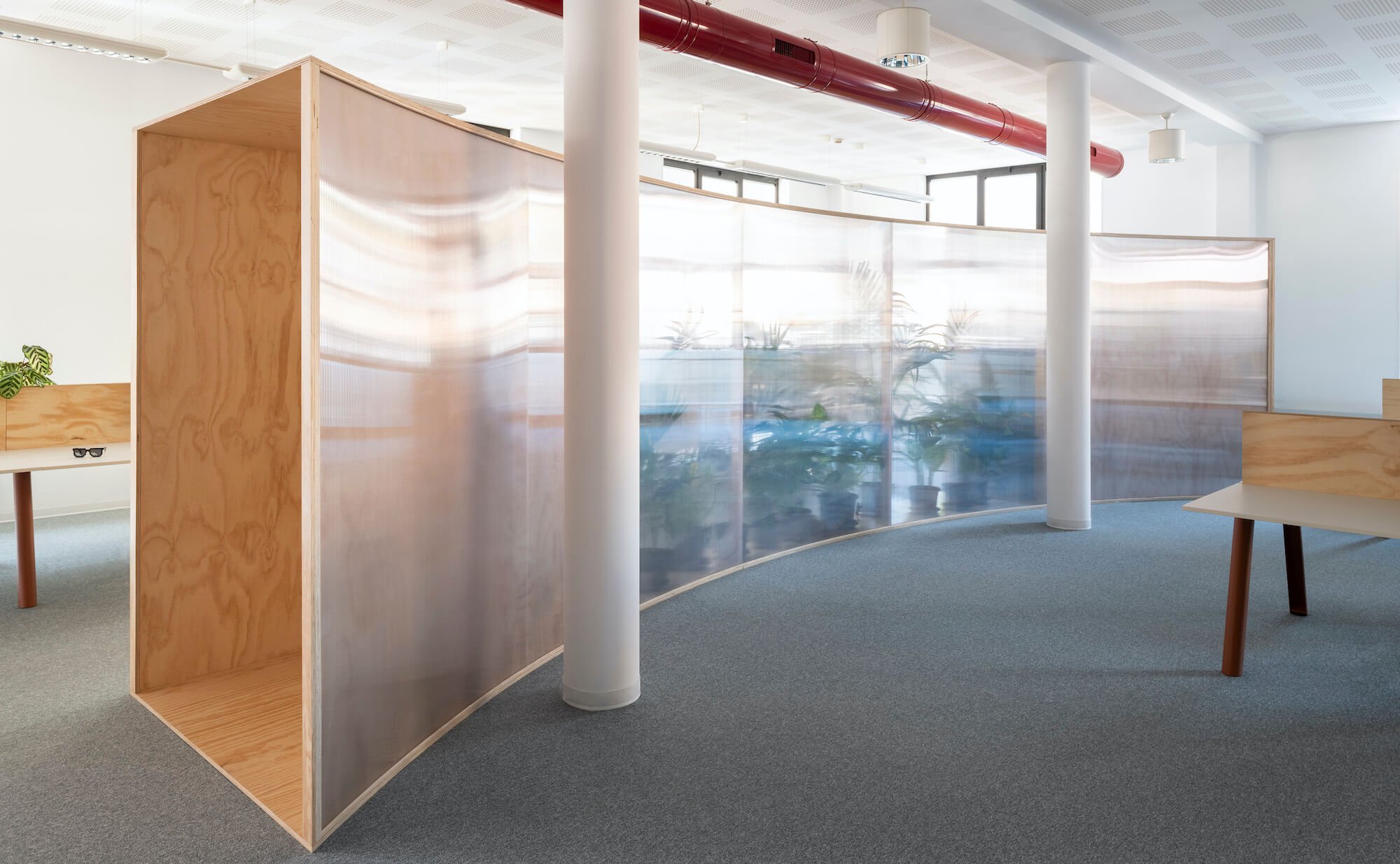 The showpiece partition is bookended by a pair of small, enclosed spaces conducive to more private moments. Lined floor to ceiling in a darker texture of carpet than the rest of the office, one nook within the divider offers a space for quiet conversations and phone calls behind the curtain. It’s a pleasantly calm counterpoint to an otherwise bright, energetic milieu. 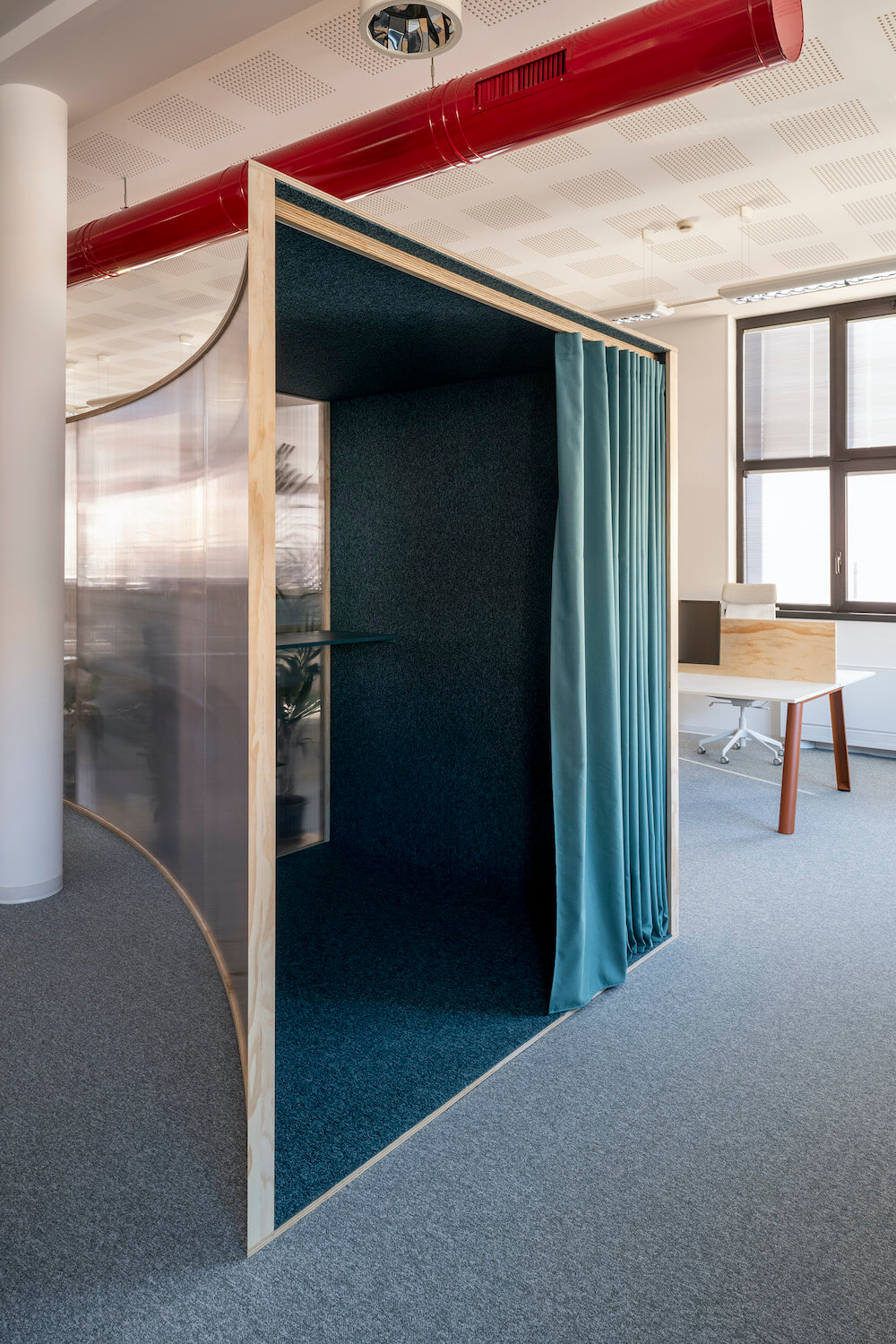 Upstairs, much of the room is devoted to meetings and collaborative work. Dominated by a flexibly programmed central space – complete with a pair of easily movable risers – Milkman’s upper floor features a tall pitched roof, which lends the space an almost residential ambiance. For the designers, the roof structure served as an inspiration to create an office that feels like a home. 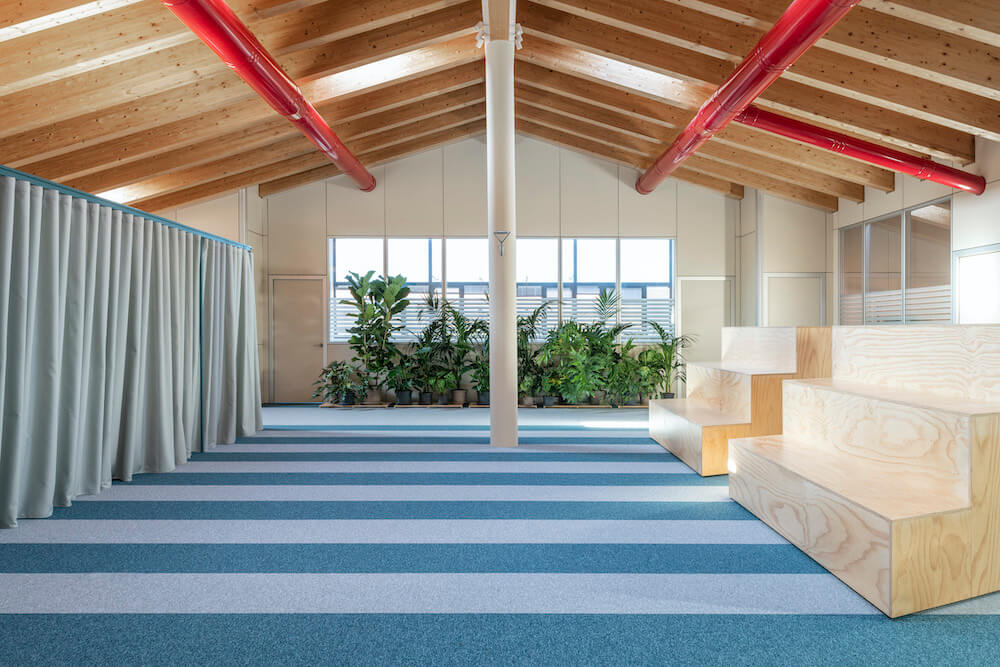 Complemented by a wall of varied greenery, two-tone carpeting introduces a playful note of pattern to the minimalistic layout. The carpet’s wide stripes also reflect the linear rhythm of the wooden roof slats above, while the industrial pipes that line the ceiling run perpendicularly, their presence tactfully accentuated by bright red paint that contrasts with both the wood tones and the cool blues of the carpet. In a simple space, these details stand out – but it’s the greenery that speaks loudest. 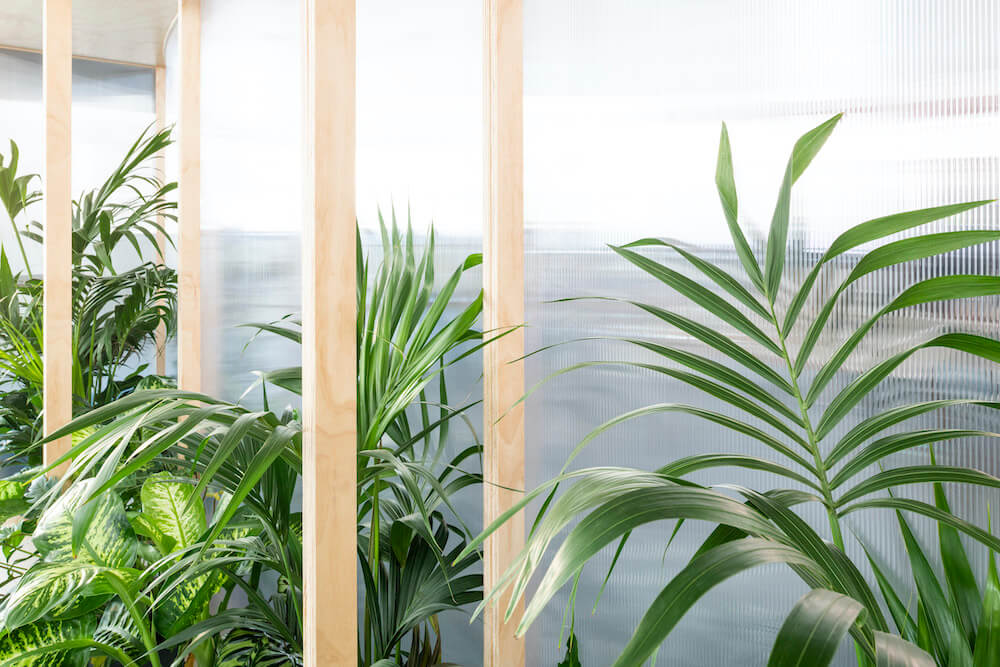 Studio Wok’s considered design ensures that the biophilia is more than cosmetic. According to the designers, plants are used almost as an “architectural material” that delineates the space. What’s more, the careful infusion of greenery was planned with noise mitigation and air purity in mind: The plantings were strategically selected and positioned to absorb the din and to help clean the air near Milkman’s workspaces. The result is an office that breathes – and feels breathable.

In an industrial corner of the medieval city, Studio Wok crafts an energetic space for tech company Milkman.