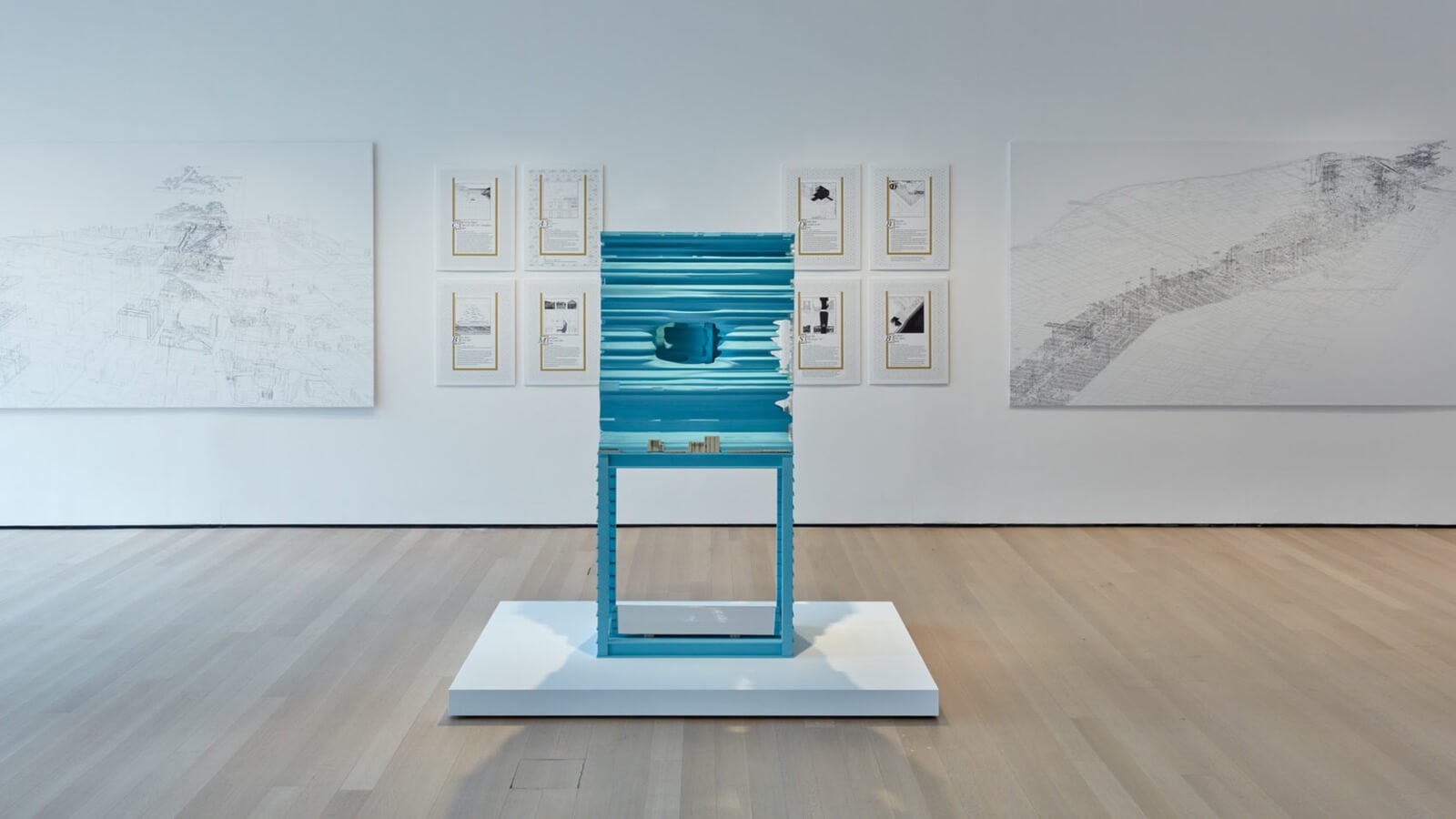 Across 11 speculative works, “Reconstructions: Architecture and Blackness in America” explores the unfinished project for the 21st century.

Lasting from 1865 to 1877, the American Reconstruction Era immediately following the Civil War saw the United States attempt to determine the legal status of Black Americans and the equalities that would be afforded to them. This pivotal moment was also the closest opportunity that Black Americans had to acquire land and financial independence — setting the stage for a post-slavery economic status that continues to be unresolved today. 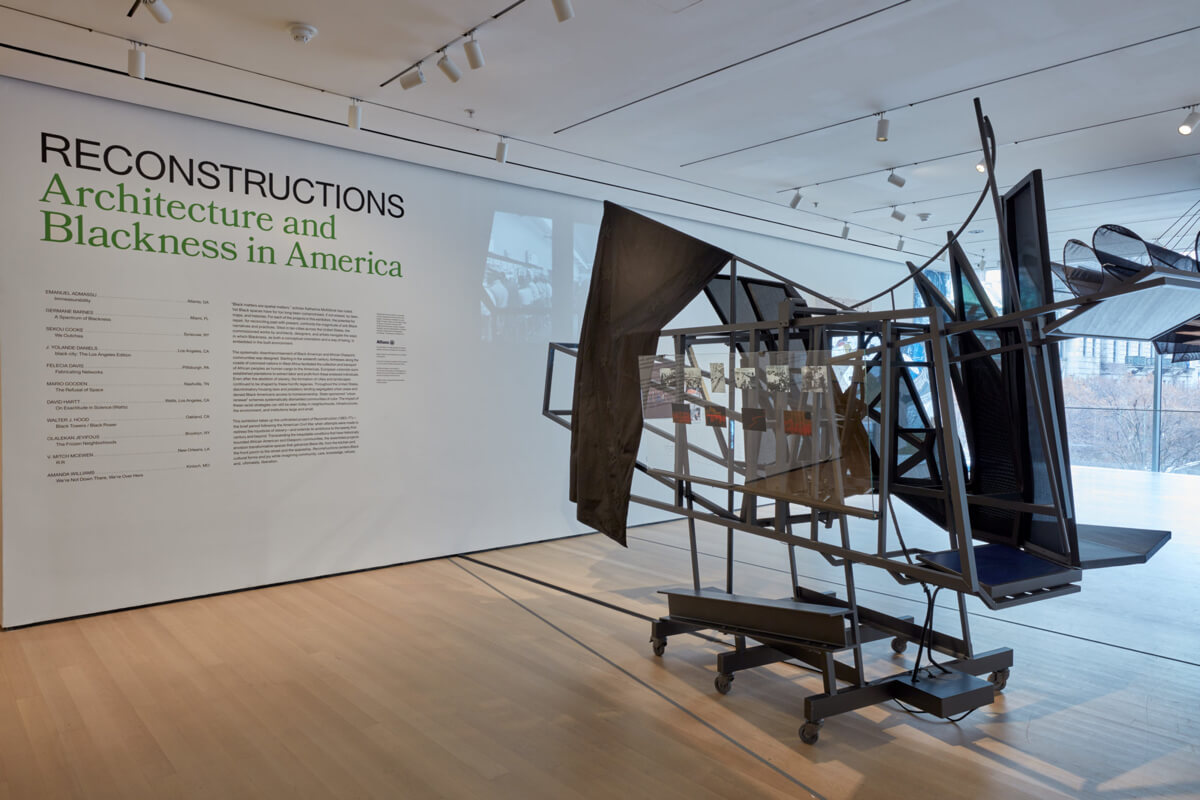 “This exhibition takes up the unfinished project of Reconstruction…and extends its ambitions to the 21st century and beyond,” reads the introductory text to “Reconstructions: Architecture and Blackness in America,” a critical survey currently on view at New York’s Museum of Modern Art. Curated by Columbia GSAPP’s Mabel O. Wilson and MoMa’s Sean Anderson, it consists of 11 newly commissioned works by architects, designers and artists that call the world’s attention to the presence and absence of Black space as well as the socio-political complexities behind its permittance or removal. 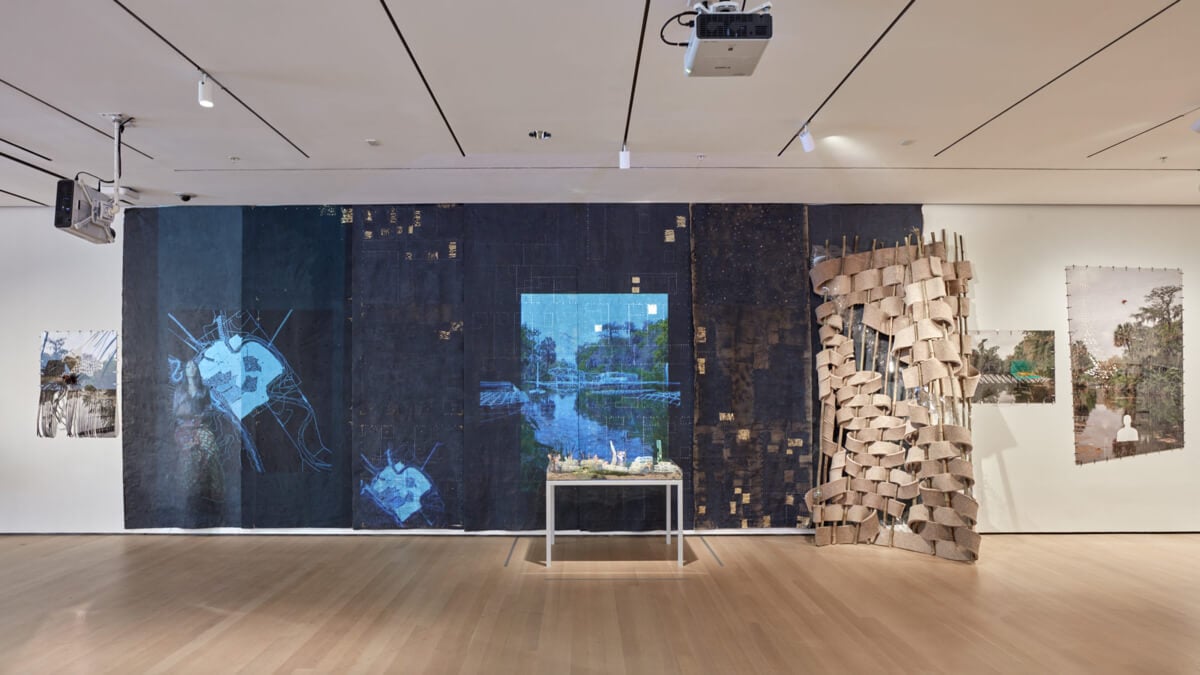 V. Mitch McEwen’s “R:R” marries vernacular techniques such as bamboo tying with contemporary digital fabrication as the basis of a speculative reimagining of New Orleans (its urban form and architecture) if the purported 1811 slave rebellion had been a success. © The Museum of Modern Art

Centuries of injustices, disenfranchisement and racially targeted offences are embedded within the very fabric of America’s built environment. By interrogating the relationship between Blackness, architecture and territory, the exhibition demands visibility for the lived experiences of people that exist without acknowledged permanence, in communities maintained by broken infrastructures, inequitable education policies and prejudiced financial accessibility. From Olaleken Jeyifous’s Afrofuturist Brooklyn, which centres on environmental justice, to the exploration of Black real estate in Los Angeles by Yolande Daniels and V. Mitch McEwen’s proposal for what Black American territory could have resembled in New Orleans, each speculative project within intervenes in one of 10 cities possessing striking historical relevance in the accrual of Black wealth in the country — specifically through property. 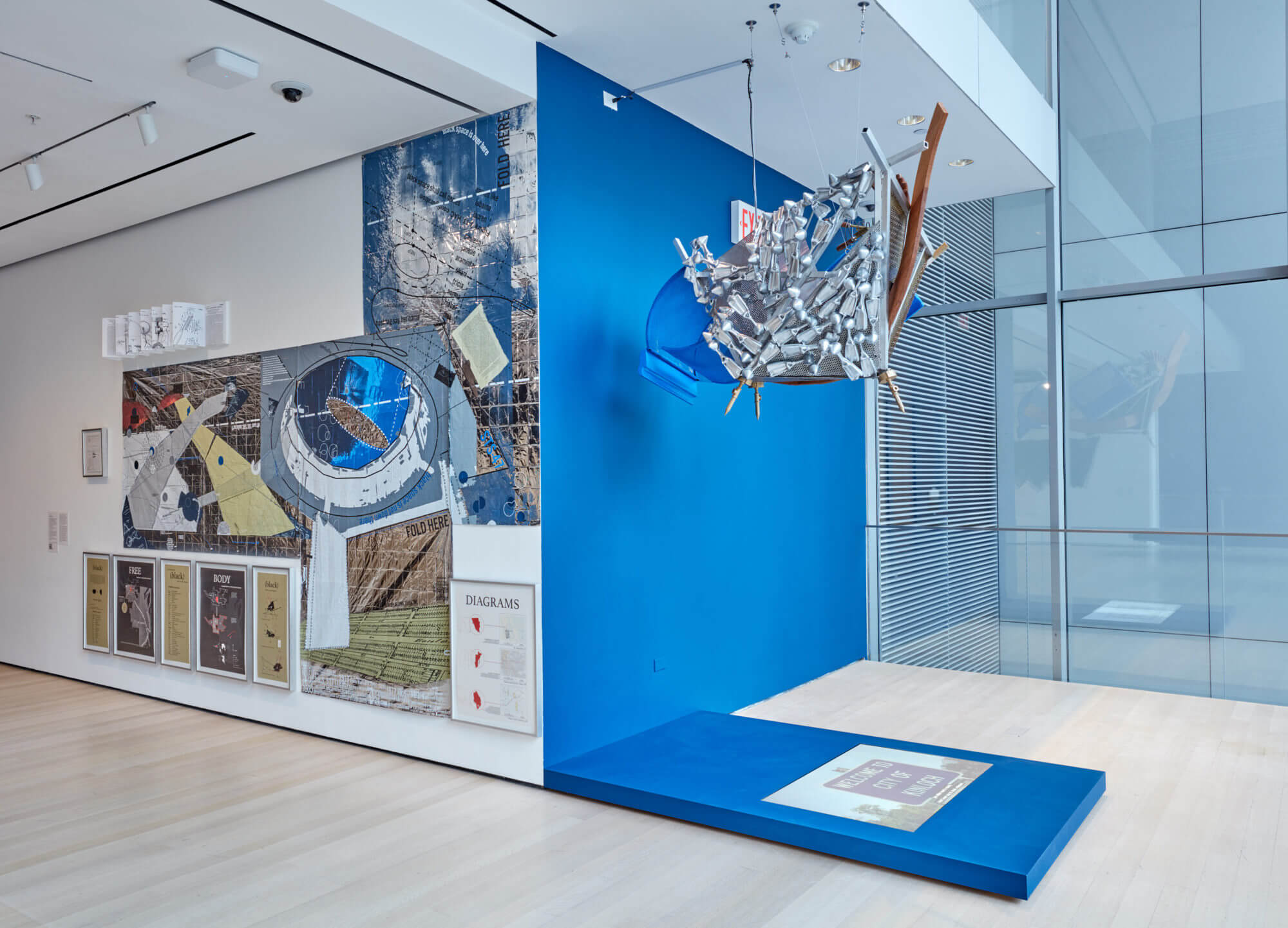 Consisting of a series of diagrams, maps and a “spaceboatshipvesselcapsule” that, according to the artist, is designed to help people “navigate their way to free Black space,” Amanda Williams “We’re Not Down There, We’re Over Here” explores the dichotomy between terrestrial and extraterrestrial Black space. © The Museum of Modern Art

In Kinlock, Missouri, the state’s oldest incorporated Black community and one of the first free-Black territories in the U.S., Chicago-based artist and architect Amanda Williams locates We’re Not Down There, We’re Over Here. Comprised of a series of mapping diagrams and tools necessary for survival beyond our world, the elements of the work come together to form a spaceship intended to transport one to interstellar Black space. Presented is a dichotomy between Black space — bodies occupying territory on American soil — and the extraterrestrial, scientifically identified Black Space, which is the infinite volume of who-knows-what that makes up a black hole. These points in space are so dense that gravity sinks, and beyond a certain region, nothing can escape. We don’t know what is in Black space, and we don’t know what it is capable of. We know that it is there. We know that it exists. But, where is it? 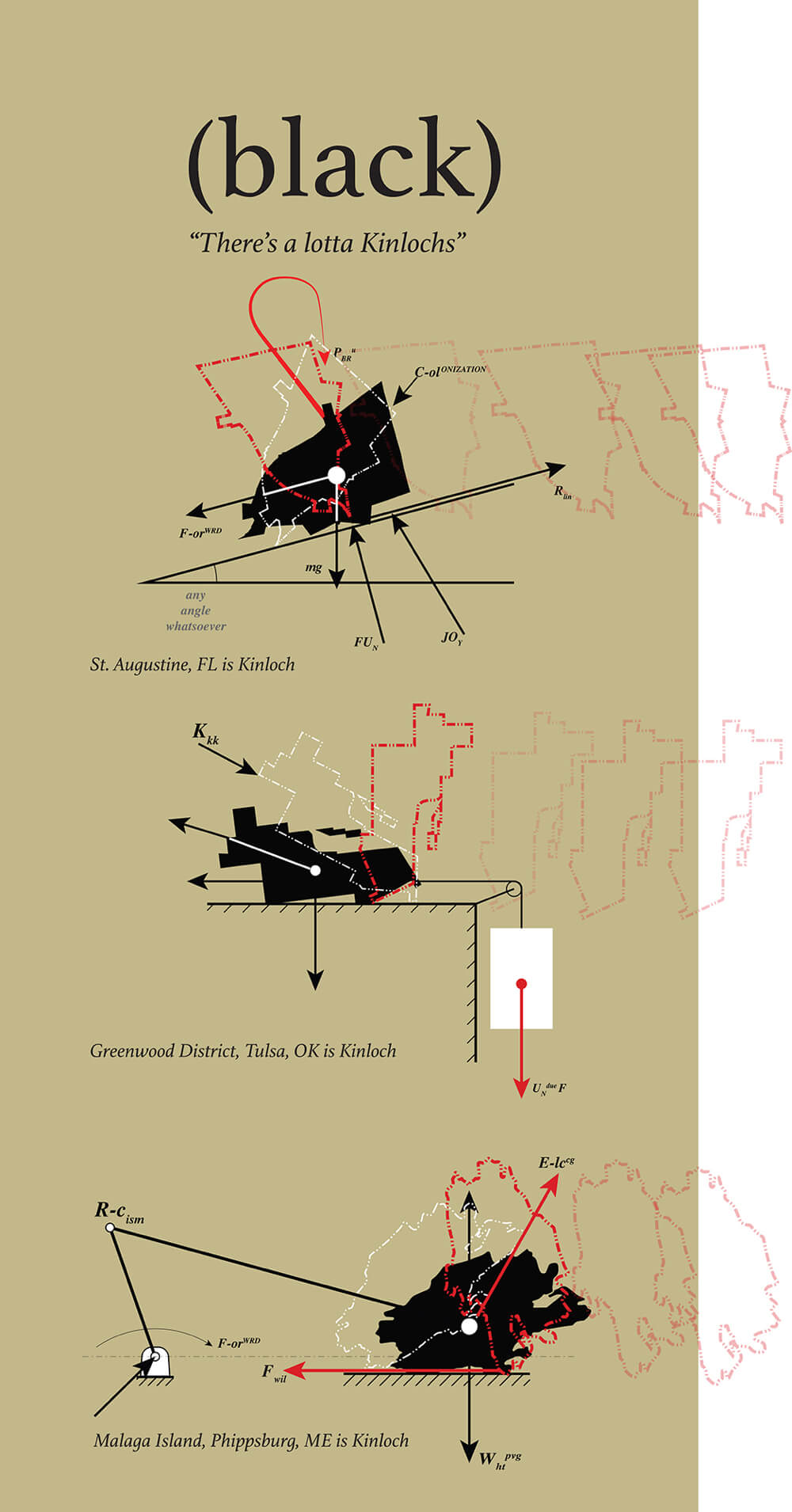 As part of William’s installation, the artist and architect created a number of “Spatial Diagrams” that explore Black space in relation the city of Kinloch. PHOTO: Amanda Williams

It’s an apt parallel to the architecture and infrastructures that policymakers have imposed upon Black communities throughout the country, especially in Kinlock, where the population depleted from a robust 10,000 to a meagre 278. Municipalities know that we are here, but we have been erased and left unacknowledged. Thus William’s work defines Black space through the experience of Black folk while drawing attention to the ignorance of said spaces. In America, land has not been maintained to allow for the fruition of Black space and has, therefore, sunken into disparity — not by our doing, but rather by the denial of proper access and resources following the Reconstruction Era. 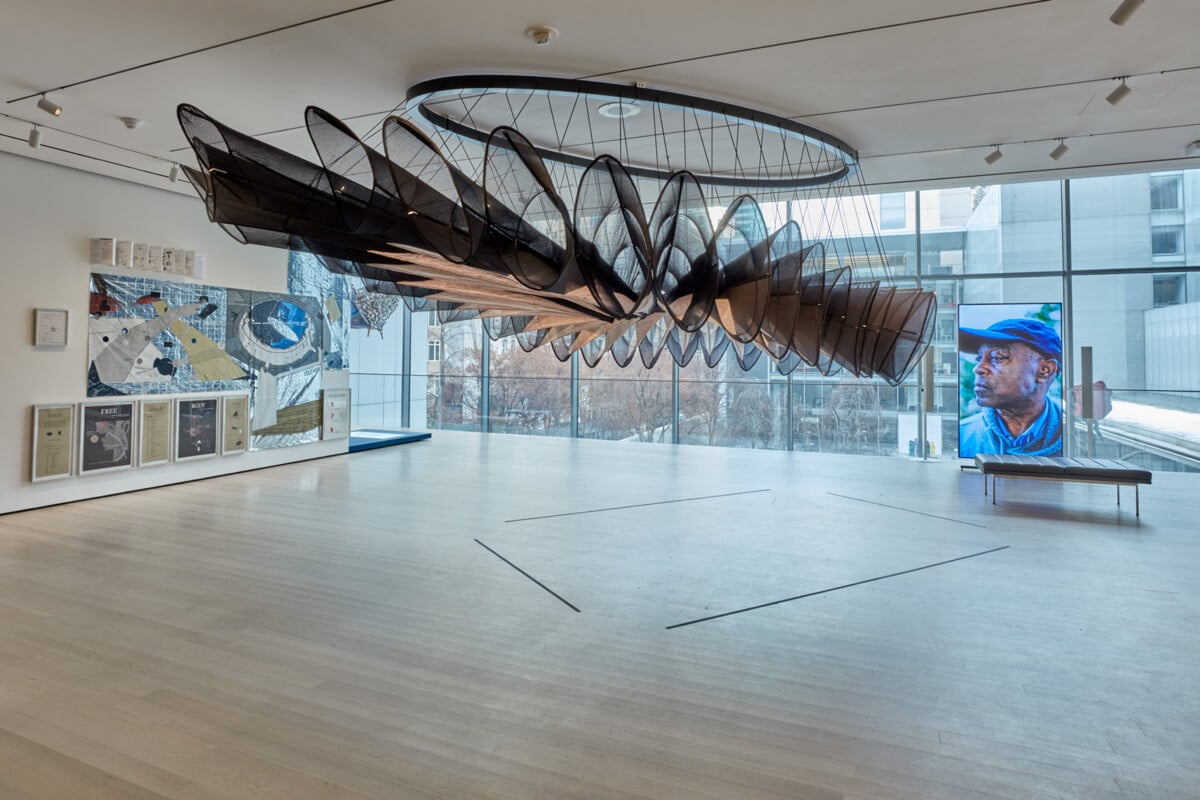 “Black space is still not occupied,” Williams declares in the exhibition catalogue. “Black space has no architect. Black space is just a part of the story.”  These statements resound as Black space is truly everywhere while simultaneously prevented from permanently taking hold anywhere. In this current moment of racial justice activism, we can all attest to the fact that Black space ran through the streets of Minneapolis just last summer and this spring. And, that it still occupies the streets of various cities across the world today. Yet, none of these places are distinctly Black nor will they carry on to be. When we look to those sites now, we find no evidence of Black space or its existence; no recollection of who and what was there.

“Black space is every nook cranny alley field city vacant lot parking lot pimpin’,” Williams continues. “Black space is glitter. Black space is phenomenally transparent erasable. Black space is watchin’ you tryna make sense of Black space from Black space.” We’re Not Down There, We’re Over Here, like many adjacent works in the show, leverages architecture to open up conversations on this permeance — a state of flux Black space has long found itself in. 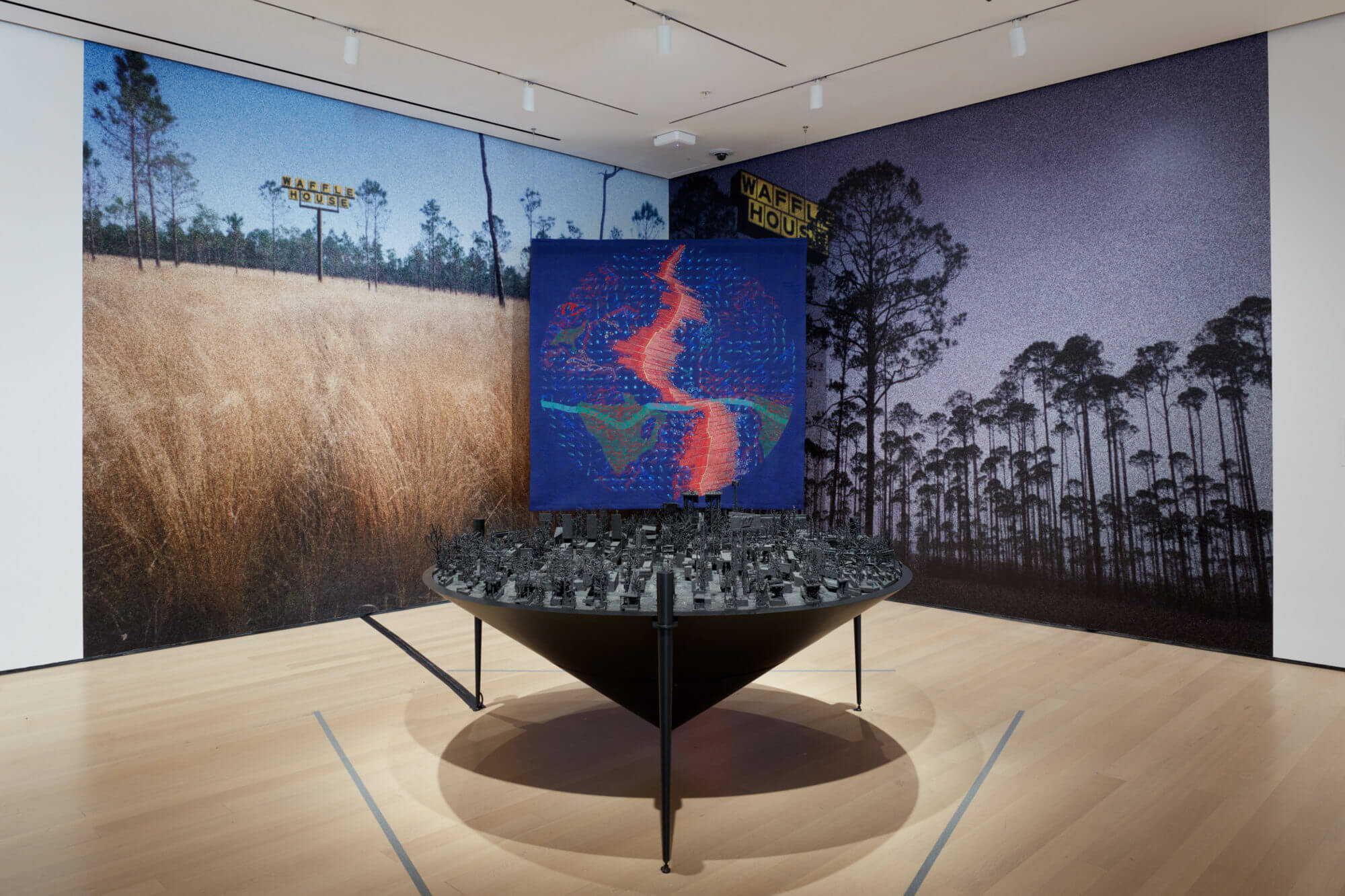 Emanuel Admassu’s installation “Immeasurability” takes Atlanta, Georgia as its site due to the city’s role as a former inland terminus of enslaved humans and cotton. It has a “rich history of Black people imagining liberation,” according to the designer. © The Museum of Modern Art

This reality is also demonstrated in AD-WO partner Emanuel Admassu’s Immeasurability, which focuses on Atlanta, Georgia. Through photographs of “ordinary” and “devalued” vacant fields, coupled with a tapestry map and conical structure sprinkled with magnetic black sand from the Mid-Atlantic Ridge (a geological formation dividing the continents of Africa and North America), the Brooklyn- and Providence-based designer presents the similarly non-architectural quality of Black space. Admassu focuses on how the territories occupied by Black folk exist outside of the built environment and, therefore, are essentially immeasurable. By gesturing to the legacy of the transatlantic slave trade in combination with evocative collages of pastoral natural landscapes and the infamous Waffle House food chain, the work represents spaces of commonality that have offered refuge for Black Americans throughout the unbound movement of the Diaspora. Immeasurability calls to the limitless expansion of Blackness beyond boundaries and — ultimately — to freedom. 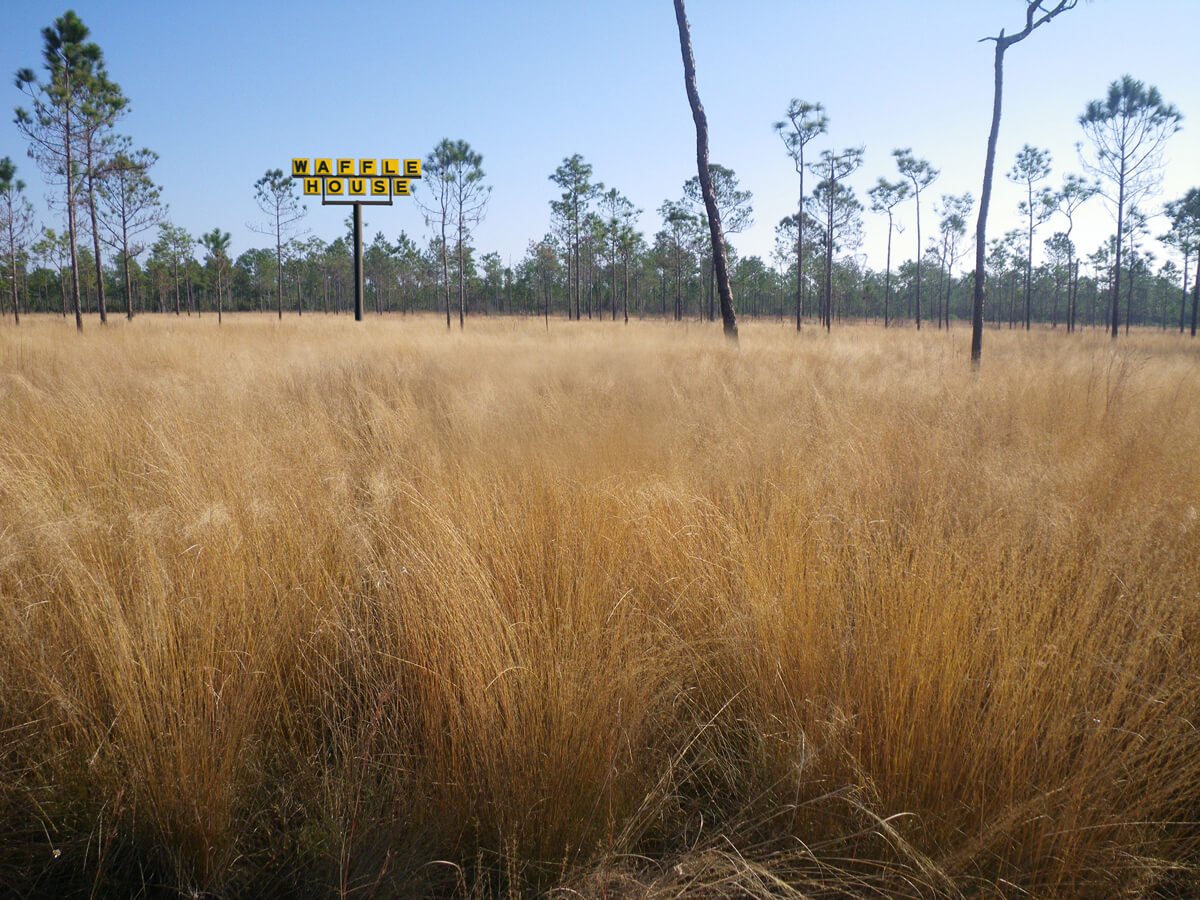 “The diffusion of the woods and the built environment provides temporal spaces for meditation and concealment beyond state surveillance and other enclosures implemented by racial capital,” Admassu writes in the exhibition catalogue. “The spaces depicted do not qualify as Architecture because they are not strictly tethered to power and capital.” Within the project of American Reconstruction, the phenomenon of Black erasability is one of the greatest architectural issues to endure. As Admassu and others evoke, this effacing is intrinsically connected with access to — and ideas of — both space and property. Black people are not property, and therefore are worthy of property. This fact is not erasable. 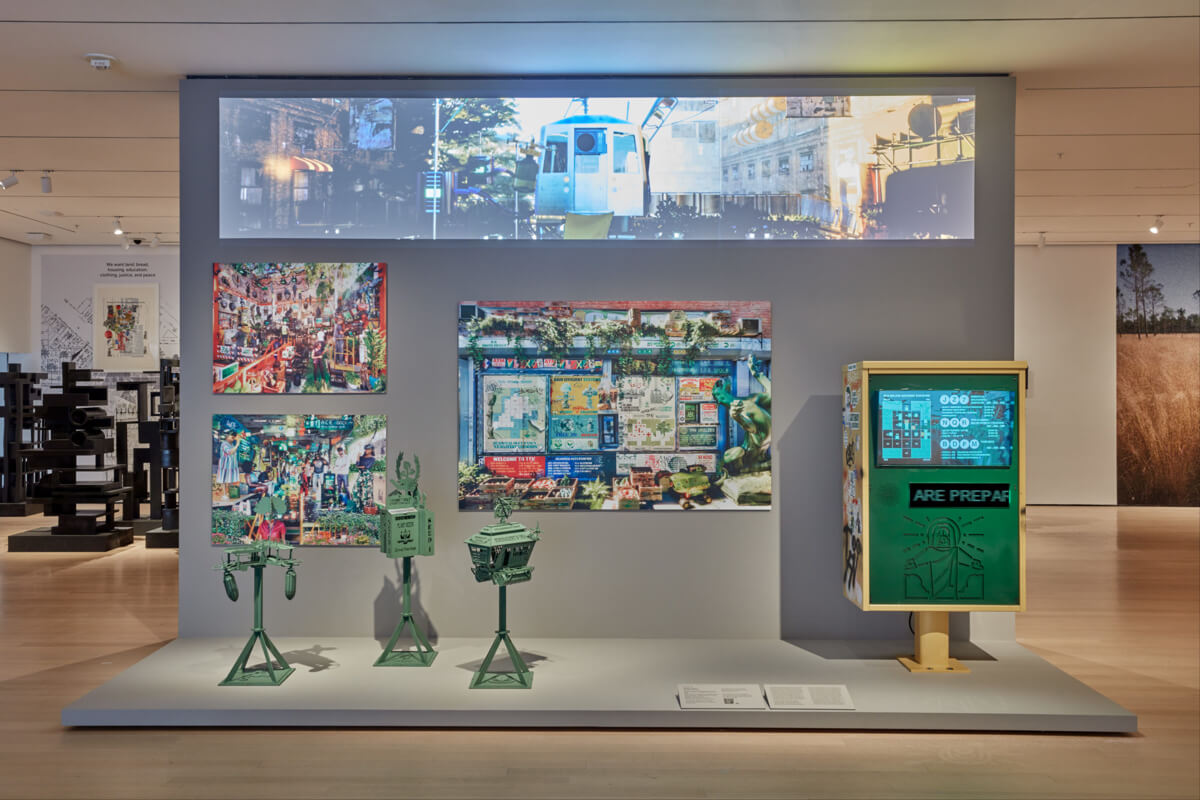 In “The Frozen Neighborhoods,” Brooklyn-based Olalekan Jeyifous exasperates current conditions — redlining, predatory loans and the climate emergency — to envision a future for his area as a “solar-punk” enclave of resiliency and community fortitude. © The Museum of Modern Art

In the end, I would be remiss if I were to mark this collection of works solely as a demand for action. The exhibition is only a cursory look at what is necessary for us as designers, architects and creators. As the second showcase in a major American museum by a cohort of Black architects to date, it is an important next step in engaging broader conversations around racial disparity in land use, property rights and space itself. “Reconstructions,” the curators remind, “centres Black cultural forms and joy while imagining community, care, knowledge, refusal and, ultimately, liberation.” For Black and Brown folks in the United States, it is an ode to the vitality and fortitude of our experience, and a proposition for the development of a new setting where Black space is included, if not foundational. Reconstruction in America remains unfinished.

“Reconstructions: Architecture and Blackness in America” runs until May 31 at the Museum of Modern Art in New York.

Across 11 speculative works, “Reconstructions: Architecture and Blackness in America” explores the unfinished project for the 21st century.