Montreal Firm ACDF is Helping the Tech Industry Develop a Mature Aesthetic
The young firm is winning acclaim for its interior projects for tech clients. Here's why. 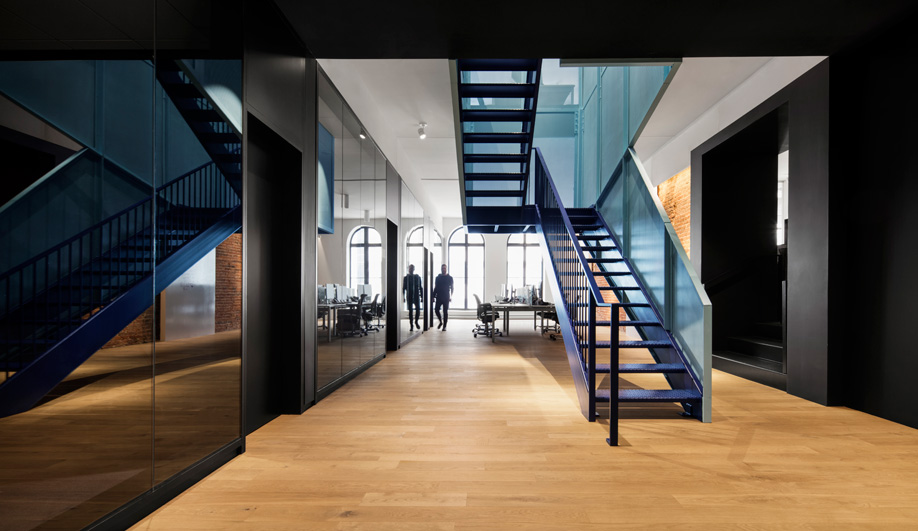 The firm’s trademark mix of materials, textures and colour is seen at the centre of the space where the stairwell is clad in baby blue nperforated steel. 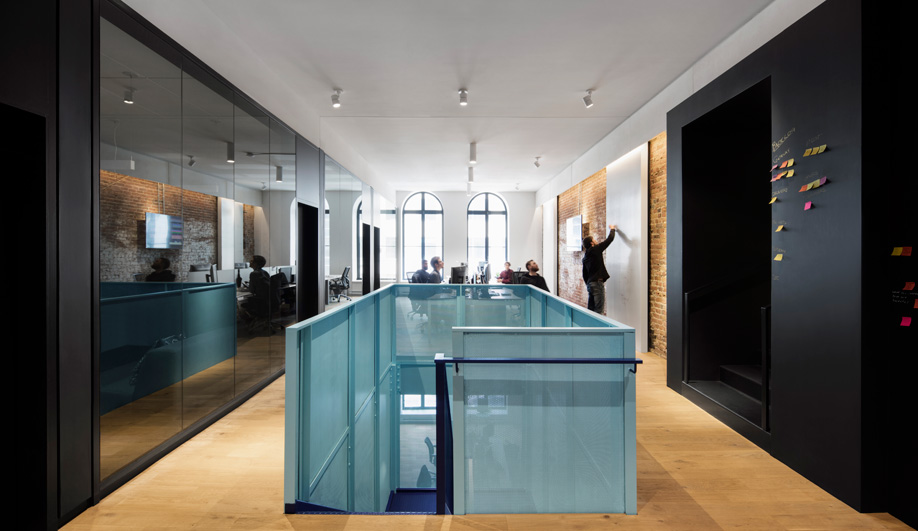 Sticky notes cover a wall coated in chalkboard paint, and a full-height whiteboard is an invitation for employees to have impromptu stand-up meetings. 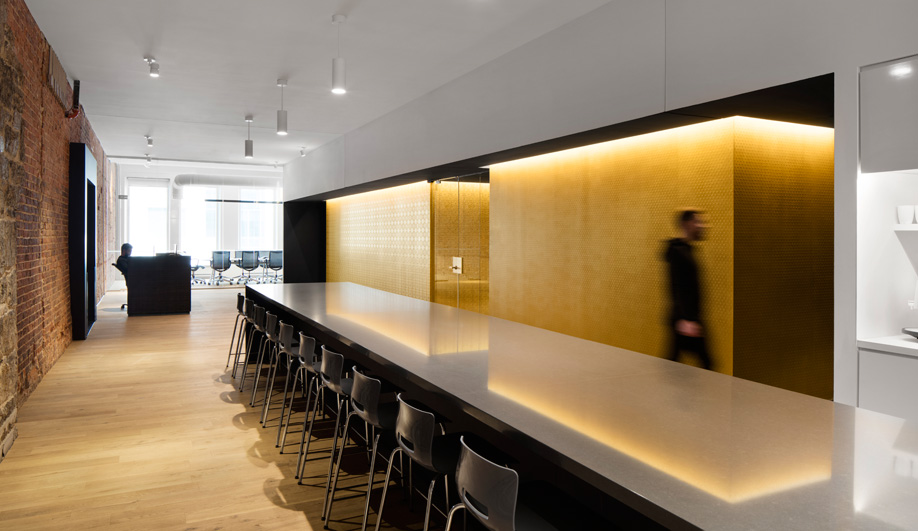 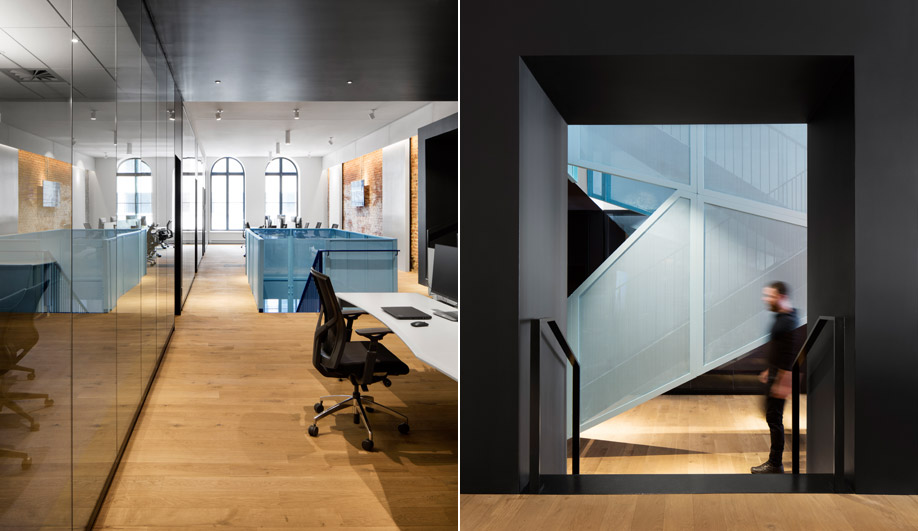 The office comprises two adjoining buildings that share an entryway. One side contains workspaces for 60 employees; the other has been left casual and open. 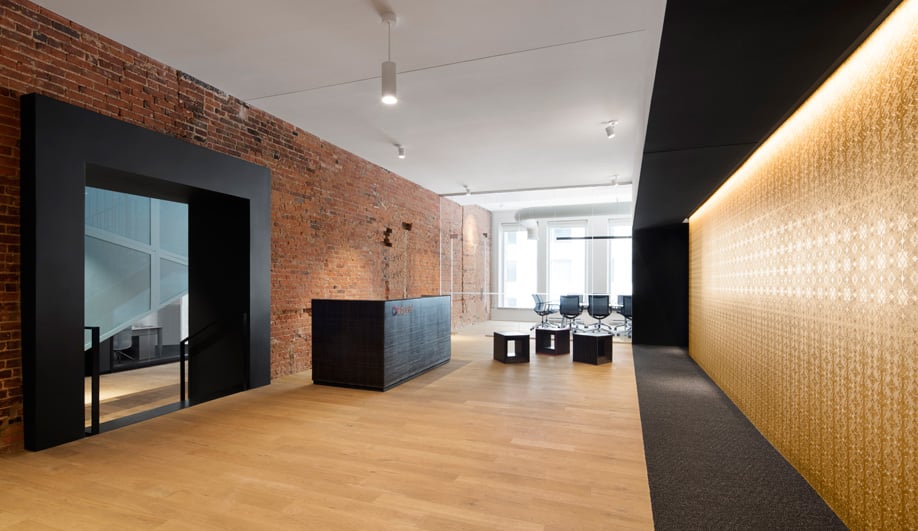 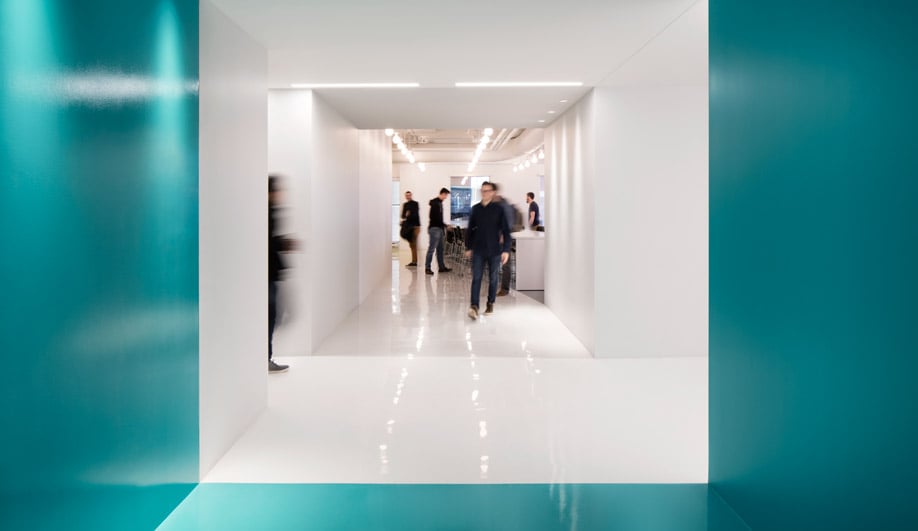 ACDF went in another aesthetic direction for Playster, using colour blocking throughout. The palette was inspired by the company logo’s bold tones. 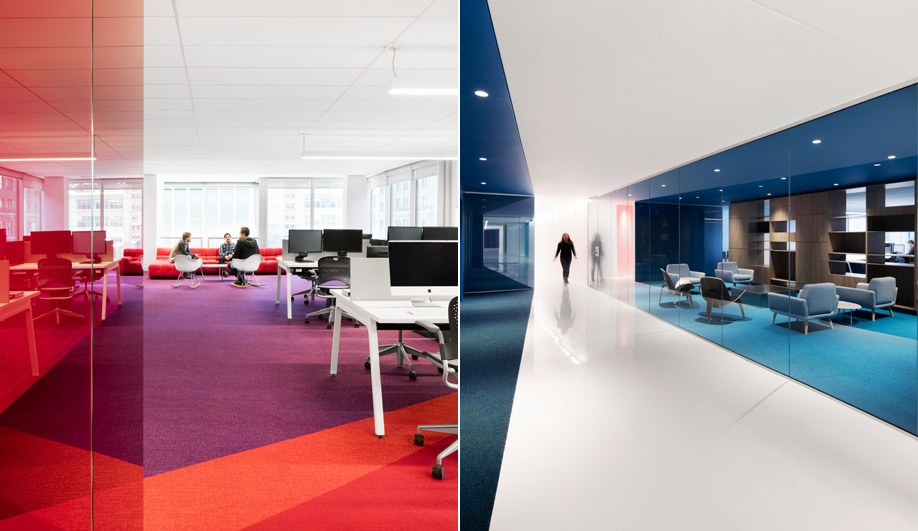 Glass partitions reflect the all-over hues, adding another layer of colour intensity. The corridor, which is coated in white epoxy, acts as the spine of the 1,672-square-metre office, connecting the various rooms and work areas. 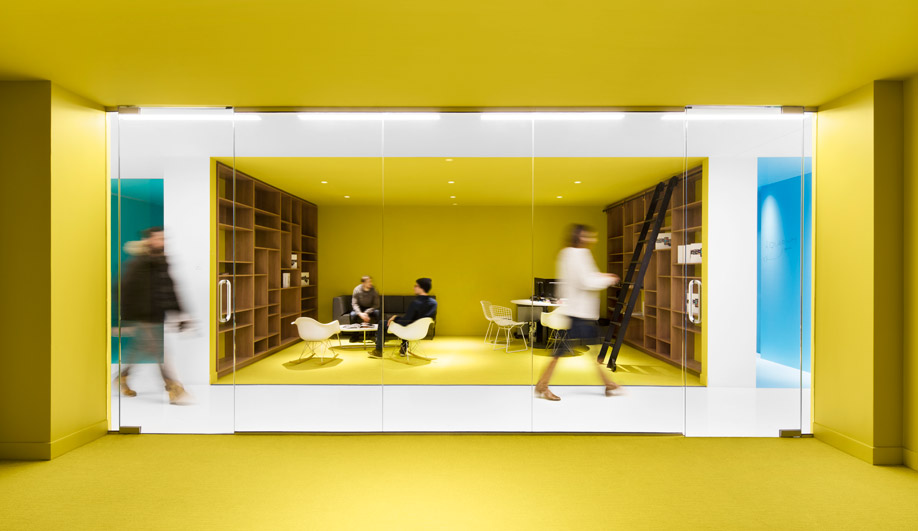 The young firm is winning acclaim for its interior projects for tech clients. Here’s why.

It’s 9:15 a.m. in Montreal’s Mile End neighbourhood. I’m late for our interview, but Maxime-Alexis Frappier, president of ACDF Architecture, isn’t complaining. The extra time has given him a chance to sign off on a package of drawings due that morning. “It’s going so fast! It’s so busy!” he says, ushering me into a conference room on the third floor of a repurposed clothing factory.

As we sit down, he explains that dealing with deadlines has become an important concern for his growing firm, which now employs 62 full-time staff. “The challenge is the office structure,” he says. “You must be structured to answer the market. The clients want you to be rapid and precise and solid and lean.”

It’s an unusual statement coming from an ambitious Quebec architect. The local design community tends to concentrate on cultural commissions won through the public competition system. But Frappier started ACDF in 2006 with three partners who had strong ties to the construction industry. The firm has civic buildings in its portfolio, such as the library and city hall in La Malbaie, Quebec, but its high-profile projects have come mostly from private clients, especially in the office sector.

Recently, the firm has won acclaim for interiors commissioned by Montreal’s bubbling tech industry. A standout is the one for Lightspeed, which required the renovation of a 19th-century train-station hotel near the Old Port. The workspace features bold graphics and a high contrast between the historic shell (built of timber, steel and stone) and elegant new insertions. There is an anamorphic reception desk that, when viewed from exactly the right spot, coalesces into the company’s logo. ACDF just finished Lightspeed 2, located on another floor of the hotel; here glowing pastel colours identify work zones in a soft white office landscape.

In short, ACDF has found a way to break into the development market. “It’s good news for architecture,” claims Frappier. “The private sector is realizing that precise design work contributes to their projects.” Currently ACDF is working on a 39-storey residential tower in Vancouver and an adjacent seven-storey cultural centre, which is filled with exhibition rooms and workspaces for artists and performers. Closer to home, ACDF has two towers underway in downtown Montreal, including the 270-room Hotel Monville, set to open in July 2017 near Square Victoria.

Frappier recounts that a turning point came in 2012, when ACDF was selected as a finalist in a competition for the Keelung Harbour Services Building near Taipei. He says the office decided to enter as “therapy,” although it had little chance of winning. “The brief asked for a big iconic building, and since we were a little depressed, at the start of our entry we wrote ‘No, no, no, no, no,’ recalling Phyllis Lambert’s famous words to her father that got her involved in choosing the architect for the Seagram Building. We meant: ‘no spectacular iconic form.’”

For Frappier, the experience was a revelation. “We got to compete with architects like Mecanoo and Asymptote, who were our stars when we were in school.” The competition also crystallized ACDF’s identity. “We found a way of doing our work,” he says. “We saw clearly that our approach is based on the North American way of designing: net gross, very tight, very efficient. But on top of that, we have a coiffée de flamboyance [a flamboyant touch]. And we play a lot with contrast of materials, textures and colours because it creates drama.”

The firmu2019s trademark mix of materials, textures and colour is seen at the centre of the space where the stairwell is clad in baby blue perforated steel.

This touch is on display in two recently completed tech offices. For AdGear, a digital advertising provider, ACDF repeated the trick of inserting new elements in a brick-and-timber shell. Black and white walls and cabinetry make a stark background for subdued complementary colours, restricted to gold wallpaper around meeting rooms and an expanded-metal staircase painted in robin’s-egg blue.

For Playster, an online streaming service, ACDF organized 1,672 square metres of workspace around a gleaming white corridor, off of which are rooms blocked out in saturated monochromes (teal, plum, cobalt, and saffron) used for carpets, paint and even ceilings.

Playster: Glass partitions reflect the all-over hues, adding another layer of colour intensity. The corridor, which is coated in white epoxy, acts as the spine of the 1,672-square-metre office, connecting the various rooms and work areas.

Perhaps through working with these companies, Frappier has taken on the lingo of the industry. Amidst the rush of new projects, he’s become a cheerleader for local design. “Canadian architects have strong things to say. We have social values that are interesting to give,” he opines. “We have a strong know-how in environmental design because of our climate, and we have European flamboyance.” He pauses for a moment, and adds: “We can do very interesting buildings around the world. We just have to go out there and try.”

SHARE
Twitter, Facebook, LinkedIn, Pinterest, Email
TAGS
Architecture, Canada, Office,
AZURE is an independent magazine working to bring you the best in design, architecture and interiors. We rely on advertising revenue to support the creative content on our site. Please consider whitelisting our site in your settings, or pausing your adblocker while stopping by.