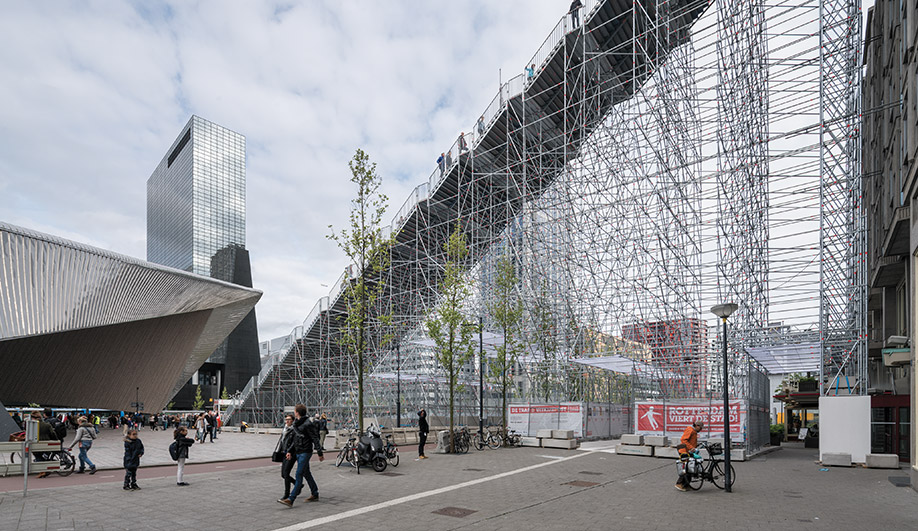 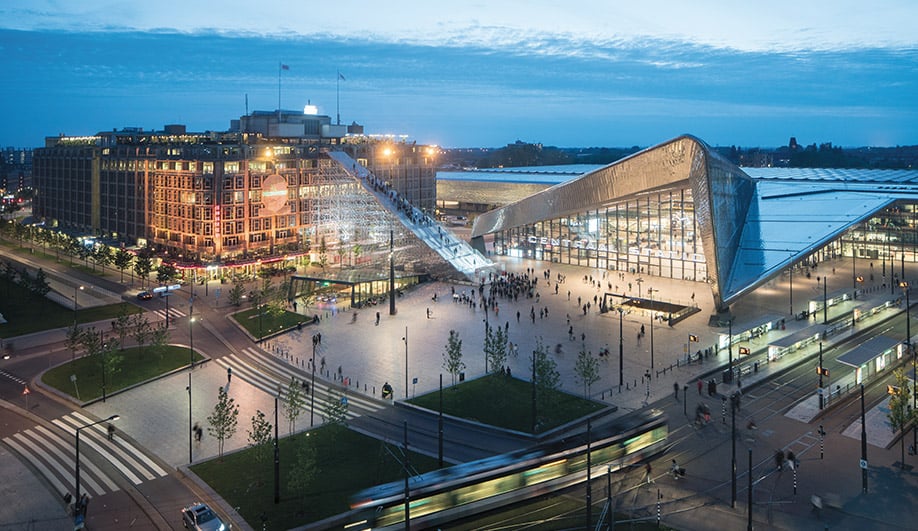 When the Groot Handelsgebouw was erected in 1953 on a massive public square in central Rotterdam, it stood as a symbol of postwar strength and renewal. The biggest commercial building in the Netherlands on its completion, it was the first major structure to rise after the near-total devastation of the city centre, and galvanized citizens to appreciate their city from a fresh perspective. For one month this spring, the imposing building once again compelled Rotterdammers to look at their downtown in a new way, thanks to a monumental exterior staircase by local firm MVRDV.

The 57-metre-long installation leads up from the square outside Rotterdam’s central train station to the Groot Handelsgebouw’s rooftop, in a modern-day version of the Ziggurat of Ur. Seen from the staircase, the structure’s familiar facade becomes a focal point, transforming the simple act of stair-climbing into an almost ceremonial procession. At its upper end, the staircase deposits climbers on the rooftop at the 1960s Kriterion cinema, which was reopened for the run of the project, along with a new temporary café and observation deck.

Part of a larger celebration of the city’s reconstruction, MVRDV’s contribution takes things to the next level – seven storeys up, to be precise. As temporary interventions go, this one took the city by storm, with an estimated 1,000 people going up per hour. Although it rises to the impressive height of 29 metres, the staircase took only a week to construct. Assembled from standard scaffolding (another nod to the history of rebuilding), it’s engineered to withstand the weight of 1,000 people, though only 300 were permitted to go up at a time. “The interpretation of the function is created by the people who use it – as a cultural item, a way to go up and see the city, as a workout, or a place to meet people,” says project leader Fedor Bron.

While MVRDV co-founder Winy Maas acknowledges that some credit is due to local landscape firm West 8 (which completed a similar project 10 years ago at Rotterdam’s Las Palmas port building), MVRDV scaled up the concept considerably. Maas is passionate about intensifying urban centres by activating their second layer, using rooftops as a way to relieve density and create more green space – something that would have a positive effect on any city. An exhibition at the top of the Groot Handelsgebouw plays out this vision with images of roofs made green and bridges connecting buildings on a higher level. Though its designers would like to see the stairs as a permanent fixture, the installation’s appeal may very well lie in its temporality.