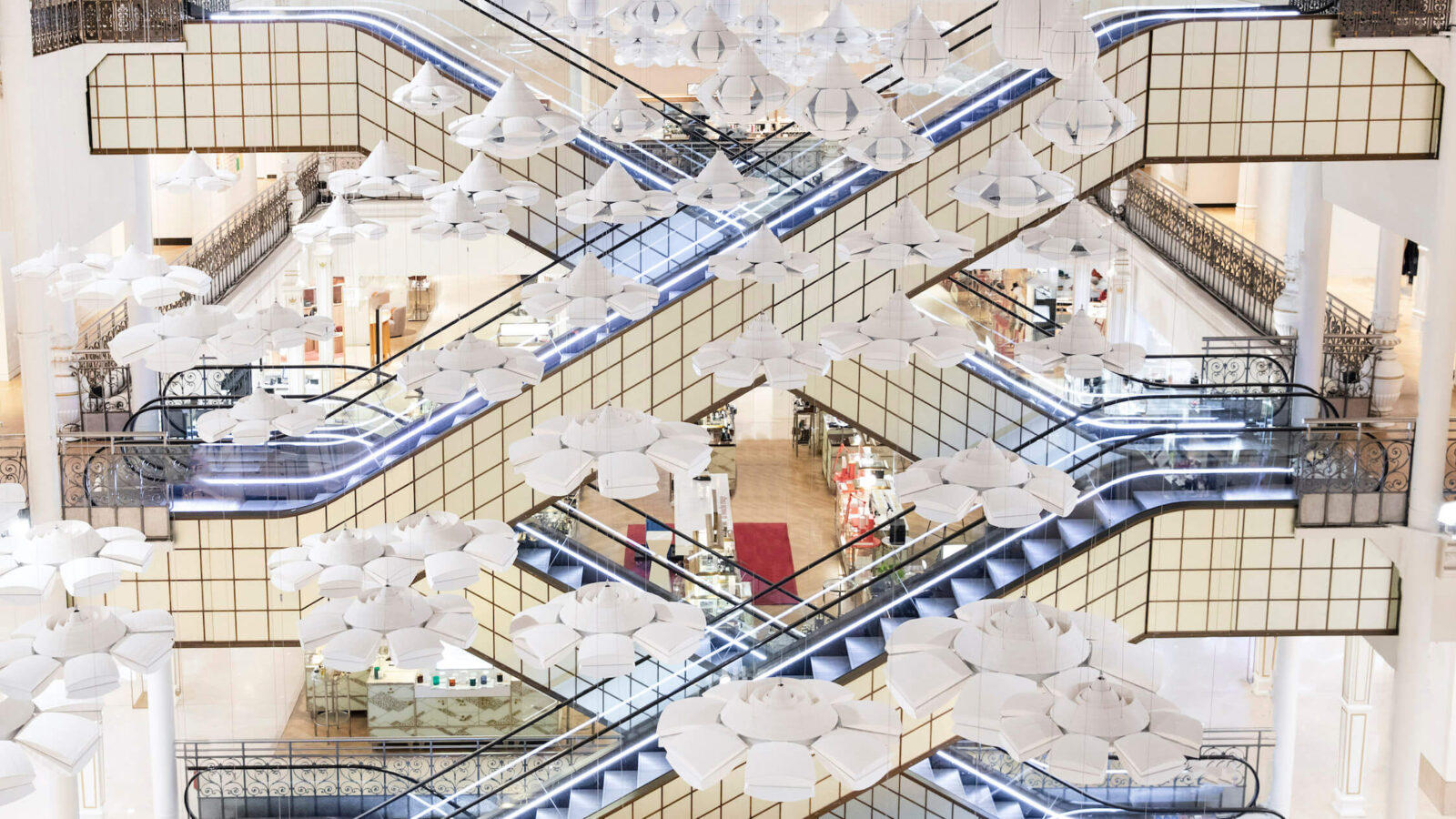 Nendo Conjures a Floral Reverie in a Paris Department Store

In the 19th-century atrium of Le Bon Marché, a trio of displays explore the relationship between water and blossoms with surprising intimacy.

On display until February 16, the three installations mine the relationship between rain and blossoms with surprising poignancy. Suspended in Le Bon Marché’s grand atrium, the showpiece display – dubbed Ame Nochi Hana – unfolds as a seemingly weightless array of delicate white flowers and raindrops.

At once joyful and subdued, the stylized white forms evoke a gentle, dreamy rainfall infused with flower petals. Elements of the display reach down from the ceiling of the atrium to meet the store’s escalators, immersing visitors in Nendo’s quiet whimsy.

The floral showpiece is complemented by a pair of smaller displays. Titled Rain Bottle, a set of 20 glass bottles are arranged into a recessed alcove, creating a sanctified liquid showcase for seemingly unremarkable natural ephemera. Here are twigs, fallen leaves and bits of grass, all frozen in time, space – and water. Referencing the multiple Japanese words used to refer to different types of water, the subtle Rain Bottle draws out a sense of complexity from the banal.

A similar aesthetic interplay defines Uncovered Skies, an installation comprised of seven umbrellas. Shapes and colours swirl in each umbrella’s shadow, as if transmuting the grey, rainy skies above into a sort of magic. And as visitors pass by the installation’s plinth, raindrops and flowers are projected onto the floor in front of them.

According to Le Bon Marché, Nendo’s playful installations highlight an interdisciplinary approach to art and design. “Giving carte blanche to leading figures in contemporary design highlights the extraordinary inventiveness of artists who play with the boundaries between art, architecture and design…they borrow from various different disciplines to delight those fortunate enough to see their work.”

At Le Bon Marché, Nendo’s temporary displays marries the firm’s minimalist aesthetic with a fluid and expressive approach that hits the grace notes with remarkable simplicity. Sometimes, the mundane blooms into the magnificent…if only until mid-February.

In the 19th-century atrium of Le Bon Marché, a trio of displays explore the relationship between water and blossoms with surprising intimacy.