The One in Toronto, by Foster+Partners with CORE Architects 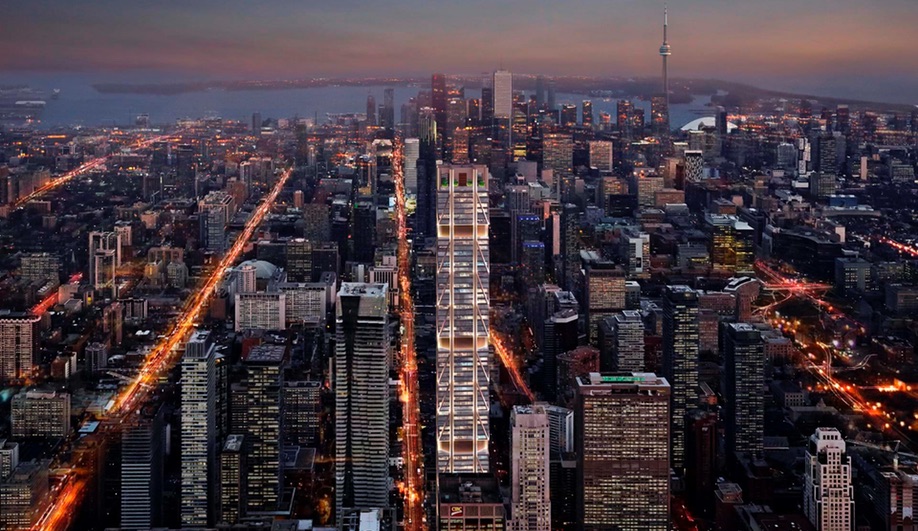 There are now two Foster + Partners projects underway in Toronto – the other being the recently announced and mindbogglingly exclusive 50 Scollard in Yorkville, with only 64 units, starting at almost $4million – but this is the more fascinating tower from an urban perspective. The One (with architects of record CORE Architects) broke ground late last fall, and is touted, at 85 storeys and 306 metres, to become Canada’s tallest building. 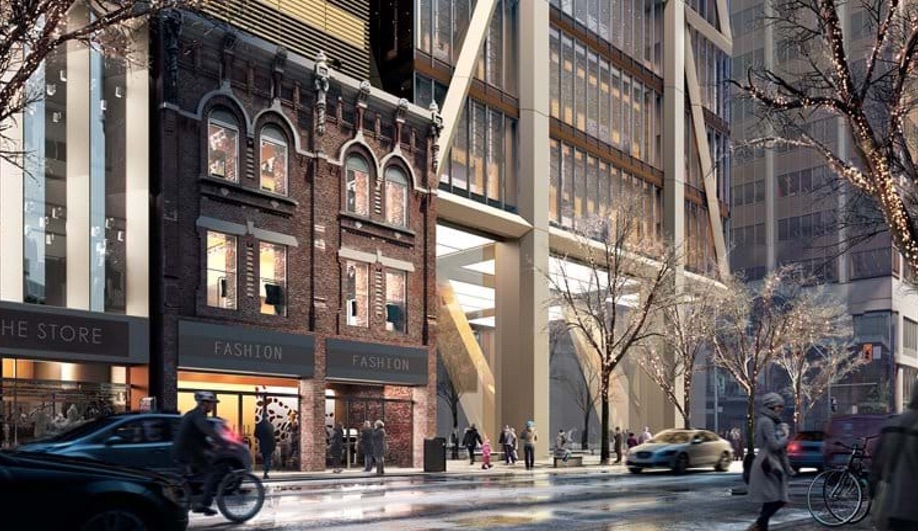 It’s located on Toronto’s most famous intersection, Bloor and Yonge, a central node long neglected until recent years with the rise of several rival towers (Hariri Pontarini’s equally compelling One Bloor is across the street). And it’s distinctive in appearance, with a series of vertical, horizontal and diagonal framing elements clad in a champagne-hued bronze. As with any condo development in Toronto, the most immediate question is price, and the 416 units at The One have been reported to be between $1.5 million and $13 million. Affordable housing this is not. But an addition to Toronto’s architectural bona fides it might one day be – once it’s complete in the next few years. 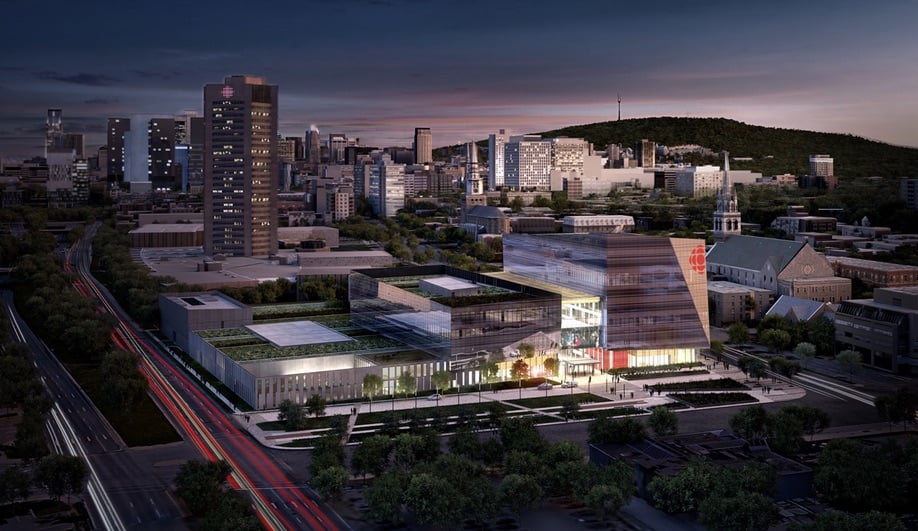 If ever an important, well-used site in the middle of a major city could be described as desolate, the CBC’s longtime headquarters on the eastern edge of downtown Montreal, wedged between the Ville-Marie Expressway and windswept Réne Lévesque Boulevard, qualifies. An ambitious redevelopment scheme, however, aims to reknit the sprawling compound into its surroundings. 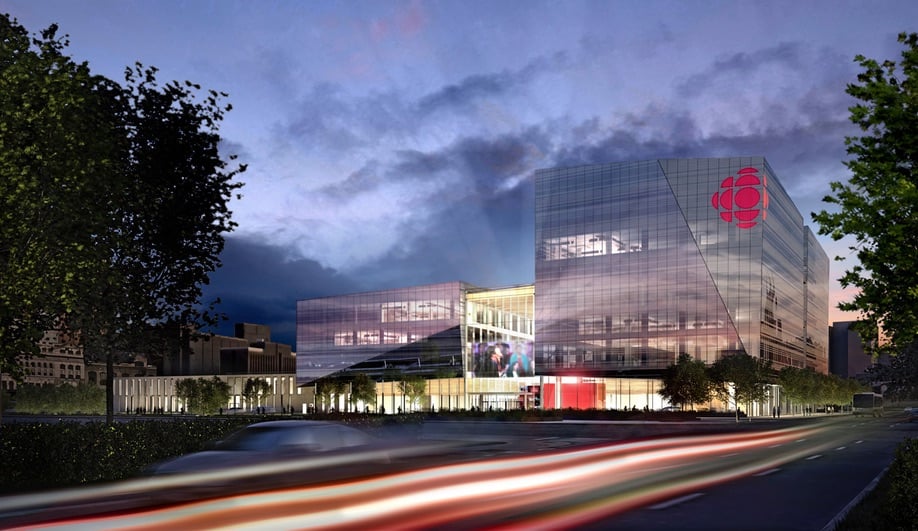 Kicked off last year, the plan is two-pronged. On one hand, the block currently occupied by the broadcaster’s French-language nerve centre is being redeveloped by Groupe Mach into social and community housing, affordable housing and green spaces. On the other, Radio-Canada itself will move into a glittering new Maison built by a consortium led by the construction giant Broccolini. 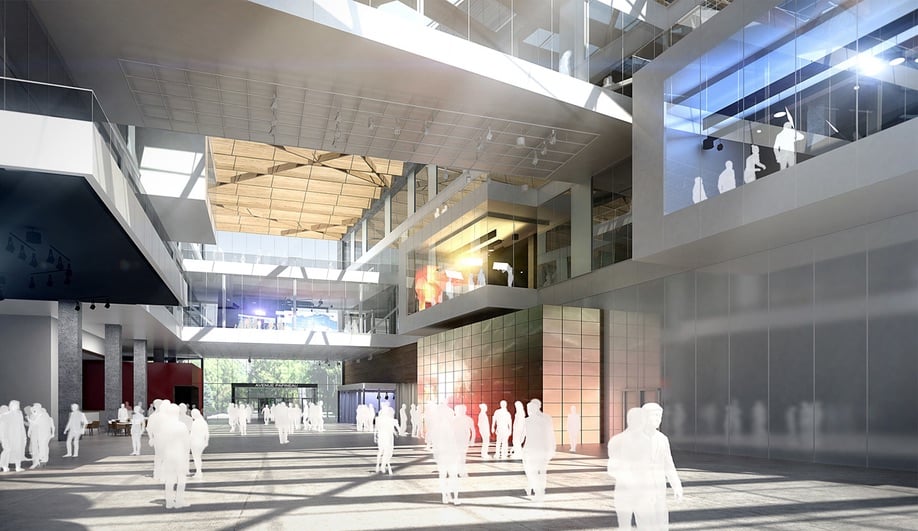 Ground broke on the new HQ, which has a footprint of nearly 39,000 square metres and consists of a seven-storey tower connected to a four-storey tower by a vast public atrium, last fall. Occupation – and a new era for the neighbourhood – will start in 2020. 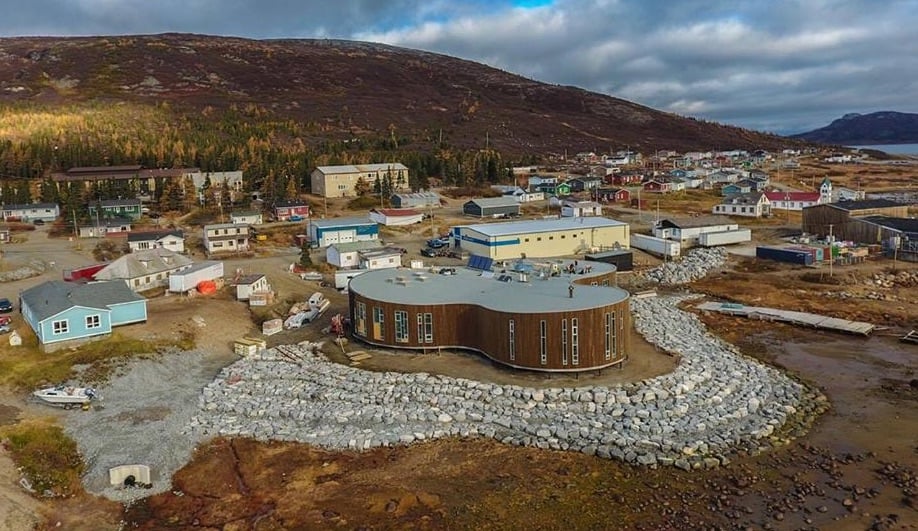 Following in the footsteps of the Fogo Island Inn, architect Todd Saunders has designed the Illusuak Cultural Centre for the Inuit community. It also resides in his home province of Newfoundland – this time in the remote reaches of the northernmost permanent settlement of Nain. Originally slated for completion in 2014, construction didn’t get underway until 2016, and has been slow going, thanks to a challenging, bog-filled landscape, permafrost and a short construction season. 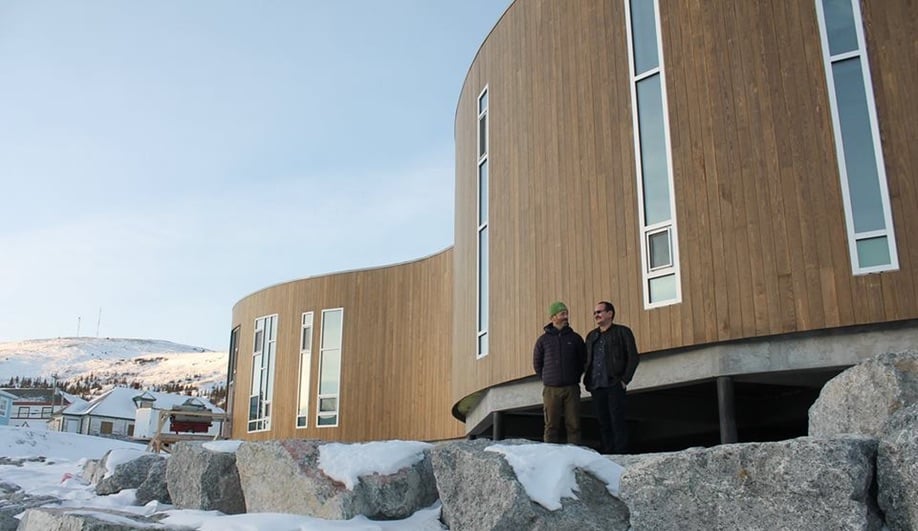 The curvaceous structure, shaped like a figure-8 with an extra appendage, sits at the edge of the Labrador Sea, hovering above the unstable terrain on stilts. When it opens this fall, the wood-clad building’s three wings will accommodate exhibition galleries, a 75-seat theatre, a cafe and spaces for community events and for Inuktitut language classes – helping to preserve local tradition long into the future.

Stanley A. Milner Library in Edmonton, by Teeple Architects 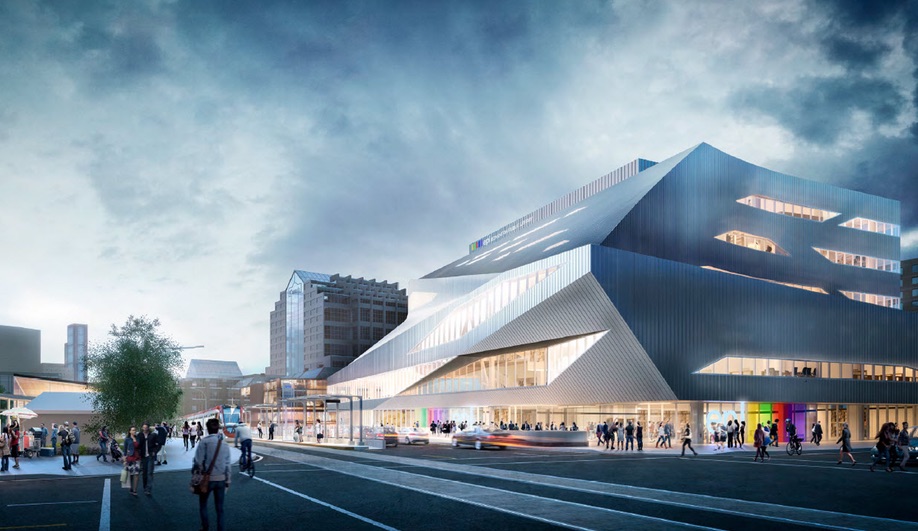 For a humble institution whose sole purpose is to serve the public, the library often comes under political attack. Which is why it’s refreshing to see such a bold vision for the renewal of the Stanley A. Milner Library, the Edmonton Public Library’s undeniably popular central location, which sees 1.2 million visitors a year. What began as a relatively simple re-skinning project transformed into a full, $84.5million regeneration helmed by Toronto’s Teeple Architects and scheduled for a 2019 completion. 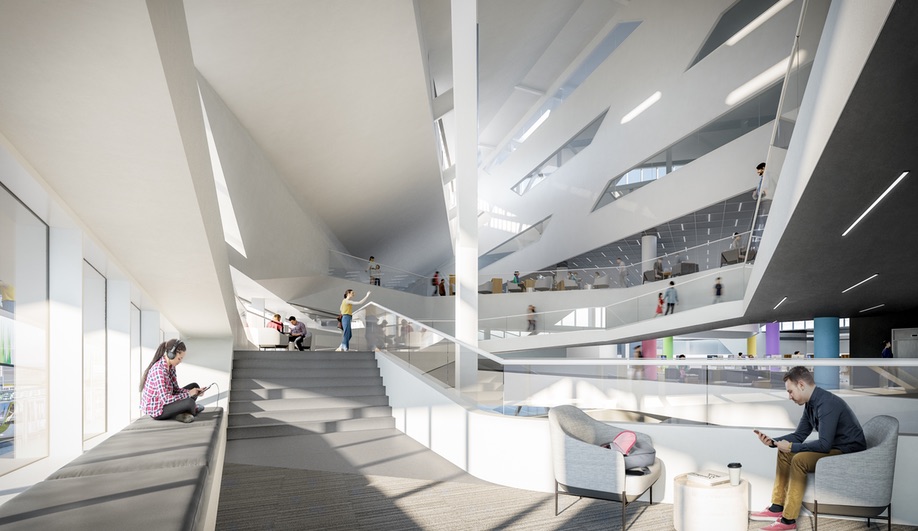 The firm will replace the pre-cast envelope of the original 1960s building, add in a soaring atrium and culinary centre, and remove additions made in the 1990s that effectively cut the library off from its surroundings. Wrapped in a new angular structure of glass and metal – which resembles a wind-sculpted snow drift – the building will make better connections to its downtown neighbourhood (the Alberta Art Gallery and City Hall are nearby) in a bid to play a major role in shaping this urban core and its future economic prosperity.

Vancouver House in Vancouver, by Bjarke Ingels Group and Dialog 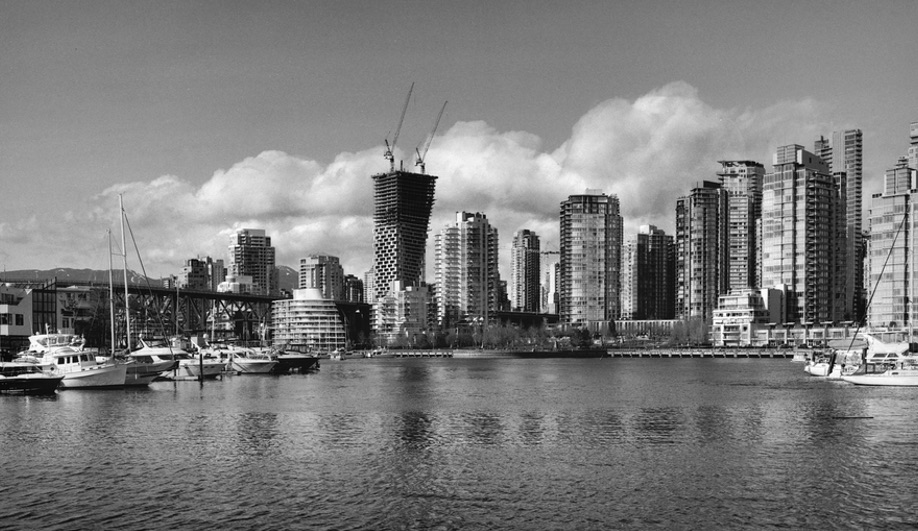 Despite its attributes as one of the world’s most liveable cities, B.C.’s biggest urban centre has often been knocked for tolerating a lacklustre skyline. It won’t hear such complaints much longer. Having topped off in June, Westbank’s Vancouver House, a 52-storey residential tower designed by Bjarke Ingels Group, rises spectacularly from the corner of Howe and Pacific Streets.

Situated on a tight triangular site where the Granville Street Bridge descends into a new neighbourhood called the Beach District, Vancouver House comprises a 156-metre tower atop a slender 10-storey podium containing retail space and rental apartments. The tower appears to be twisting, but its floorplate actually widens as it ascends, cantilevering over the bridge. The boxes framing each of its 375 units have a metallic, light grey exterior with copper-coloured interiors. The building is slated for completion in 2019.

Telus Sky in Calgary, by Bjarke Ingels Group and Dialog 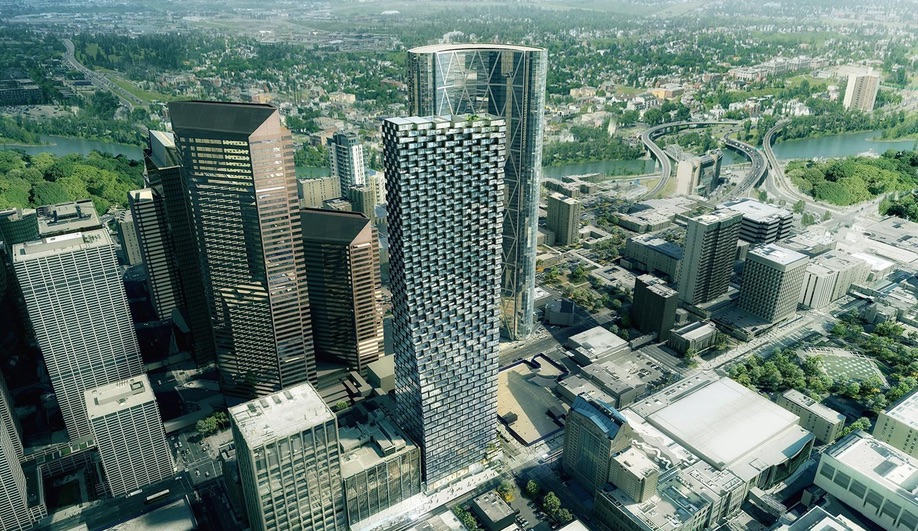 Calgary’s skyline has changed dramatically over the last decade, and with additions such as Snøhetta’s New Central Library and Allied Works’ eye-catching Studio Bell, we’d argue it’s for the better. That impressive streak continues with Telus Sky, designed by Bjarke Ingels Group and Dialog for Westbank, which disrupts the city’s skyline with a 60-storey tower that delicately twists as it rises to a 222-metre apex. 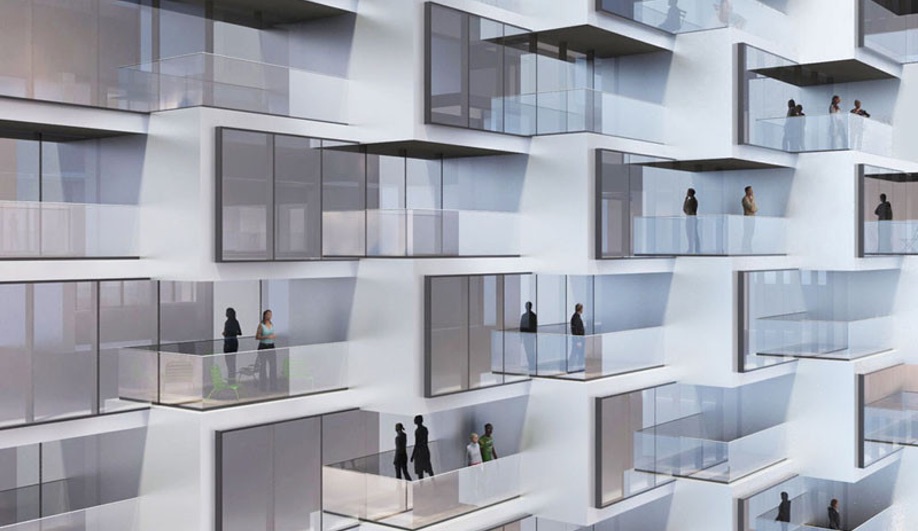 In actuality, it consists of two stacked volumes: its base is rectangular, designed for efficient office layouts. Then, as the building transitions into residential spaces, floor plate sizes reduce and pixellate, simultaneously creating balcony space and subtle gradient. The building, set to open in 2019, will add 70,000 square metres of mixed-use space to commercial (and LRT-serviced) 7th Ave. Along with a major jolt of street-level activity – a long-time concern for downtown Calgary – the building’s façade will also be lit by Northern Lights, an LED installation by Douglas Coupland.

MacKimmie Complex in Calgary, by Dialog 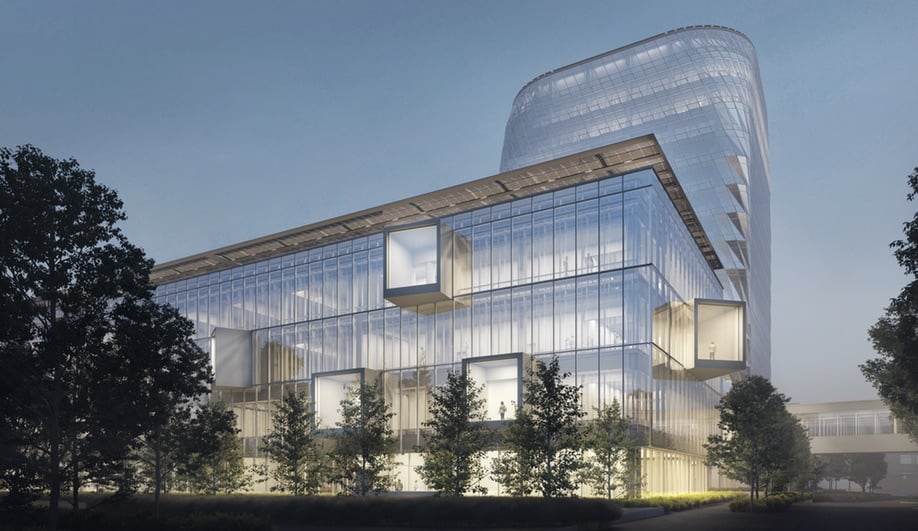 The renovations to the MacKimmie Building, at the heart of the University of Calgary campus, are underway. And with a $290 million budget, the changes to the formerly crumbling ’60s complex is more than skin deep: multi-disciplinary firm Dialog wants it to become one of the first Net Zero projects, as certified by the Canada Green Building Council. Dialog will retrofit MacKimmie’s original Tower and Block buildings, connecting them with a cloud-like atrium link (below).

Both buildings will feature skins made from glass, concrete and stainless steel cladding to create “a breathing façade” over the existing buildings. The glassy envelope will gather the sun’s energy via photovoltaic panels, and inside, ventilation will be provided by 100 per cent fresh air systems. Along with adding classrooms, collaborative zones and private study areas, Dialog also wants the complex to encourage environmental thoughtfulness. “We are proposing a building skin that makes its energy-modelling systems… visible to the eye as a way to make climate change conversations a permanent fixture in life on campus,” says Dialog principal Robert Claiborne.

The Joyce Centre in Hamilton, by B+H Architects and McCallum Sather Architects 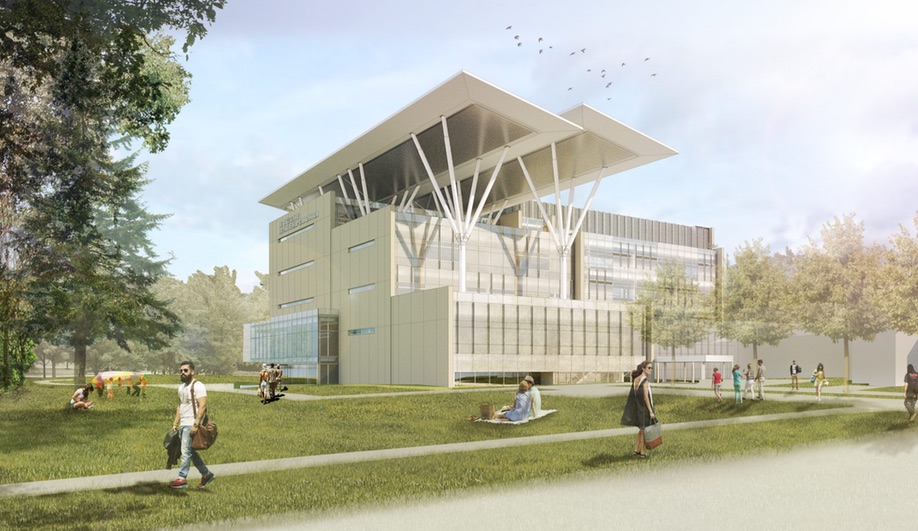 Like the MacKimmie Complex, the Joyce Centre, at Hamilton’s Mohawk College, invites students to think about energy differently. But unlike its Calgary cousin, B+H Architects and McCallum Sather designed the building to be Net Zero from day one, by developing a project that uses 75 per cent less energy than its comparables. No natural gas will be used onsite. 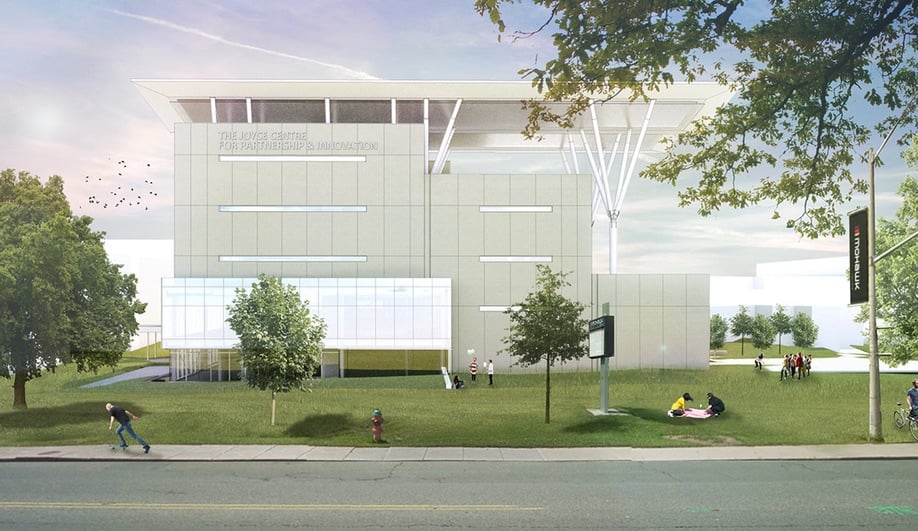 The $50 million project features a five-storey, L-shaped building with two large canopies covered in 500 photovoltaic panels. According to McCallum Sather, this produce 550,000 kilowatts of clean energy annually, an amount that can power 45 Canadian homes. Additionally, energy will be drawn from geothermal wells 600 feet below the buildings. High-performance, triple-glazed windows were also critical: curtain walls can passively light buildings, and the architects materials that provide better insulation than standard glass. The Joyce Centre, says B+H, hopes to foster a “culture of awareness” about energy consumption, which its students – who come from Mohawk’s School of Engineering and Technology – will carry long after they graduate. 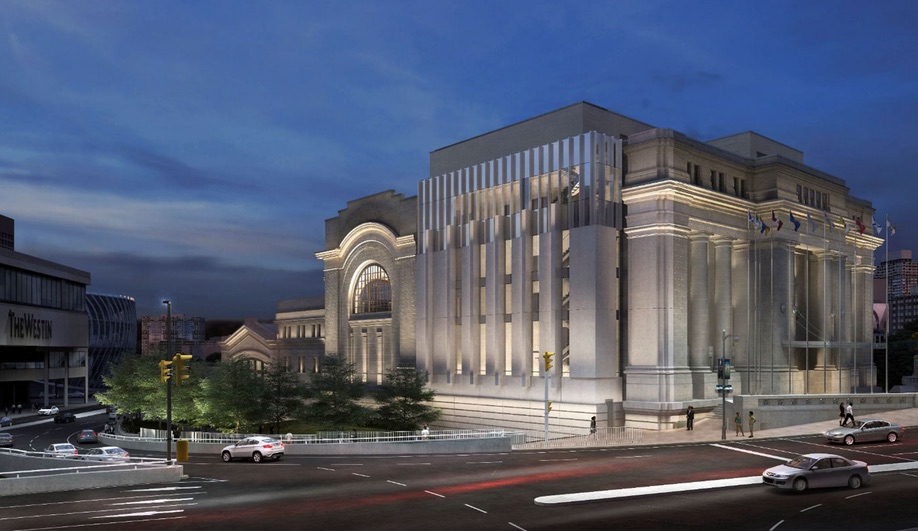 Ottawa’s Government Conference Centre has lived many lives since it was built in 1912 to serve as the city’s Union Station. The original building was modelled as a 2/3-scale replica of New York’s Penn Station and many of the structure’s original Beaux Arts details – including the ornate plaster ceilings – are now restored as part of the current renovation and expansion, by Diamond Schmitt with KWC and heritage experts ERA in a joint venture. 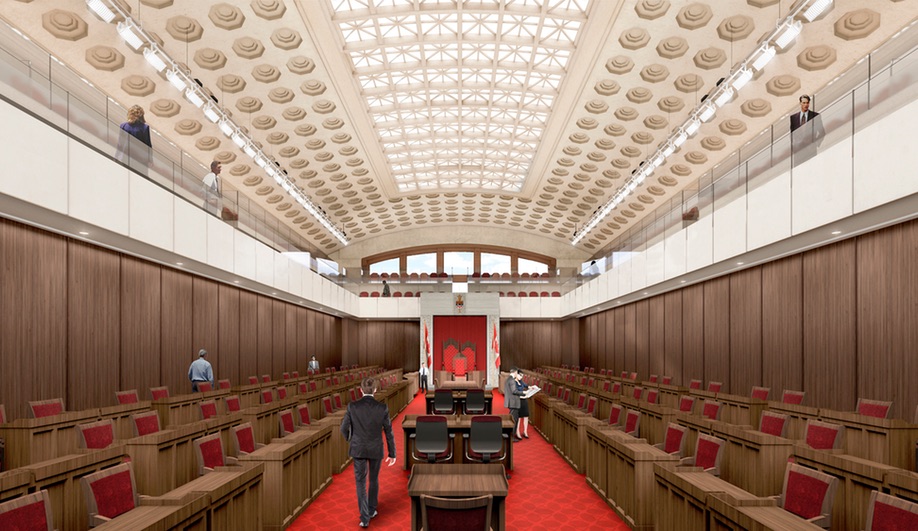 In tandem with modernizing the interior, new life will be given to historic features that have been hidden since the since the building was transformed into a conference centre in the mid-’60s. As part of this massive overhaul, new seismic bracing was added to fortify the landmark, ensuring that it survives its next incarnation – as the interim Senate Chamber – which begins in January 2019. 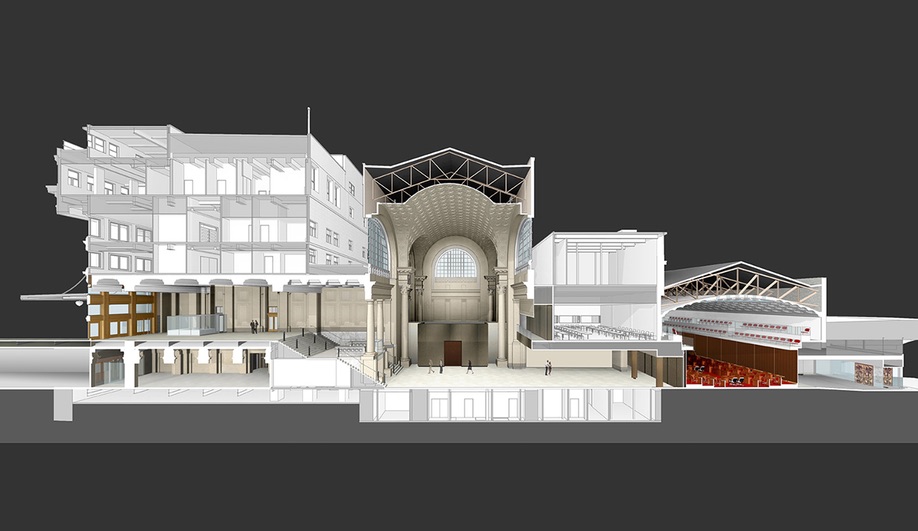 The Museum of Contemporary Art by architectsAlliance with heritage architects ERA 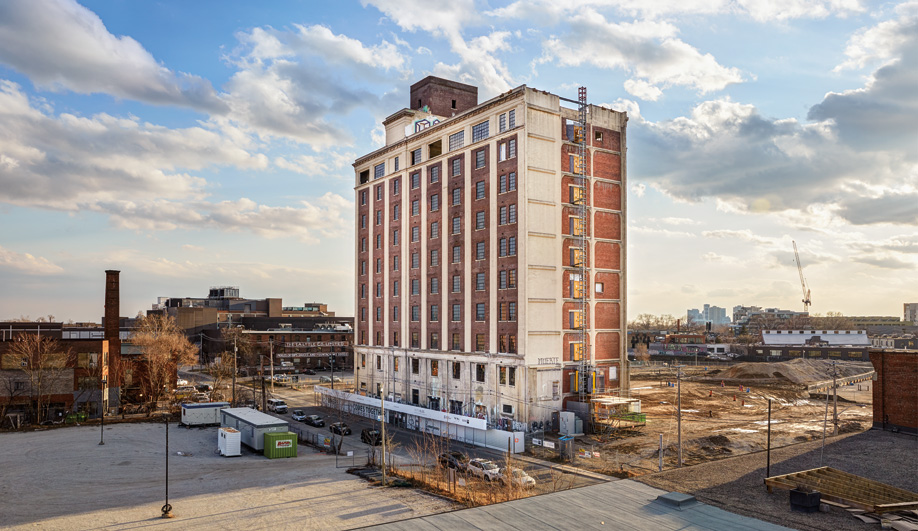 After a series of construction delays, the Museum of Contemporary Art (MOCA) is finally slated to open this September in the iconic Tower Automotive Building, a former auto parts factory built in 1919. Once the tallest edifice in the city, the 10-storey Art Deco standout harks back to Toronto’s working class history – stretching from the Depression to 2006, when it ceased operations – as well as the city’s long love affair with red masonry.

Today MOCA sits on an impressive 5,000-square-metre site, owned by developer Castlepoint Numa, abutted by low-slung satellite factories similarly transformed into breweries, restaurants, dwellings, studios and offices (ours included) – most of them holding their breath for the art juggernaut to move in. Barring any delays, the MOCA will open in September.