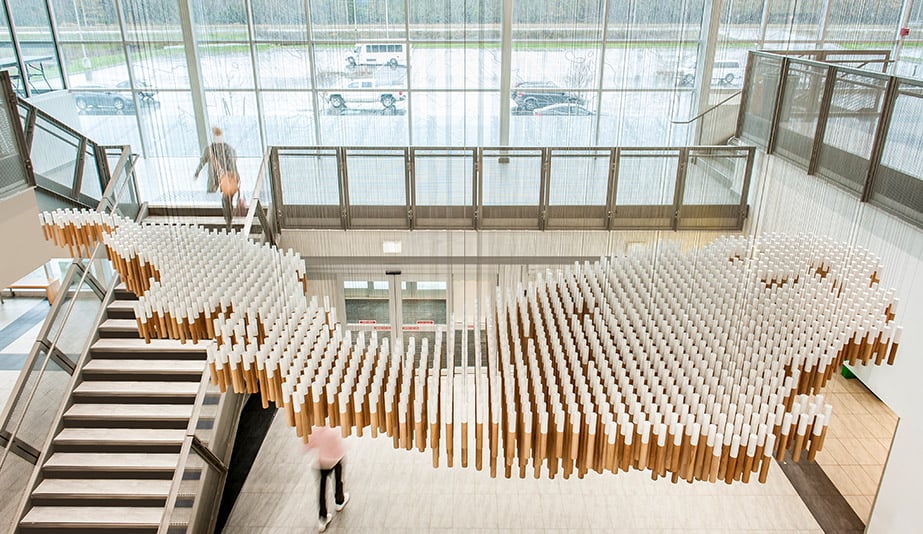 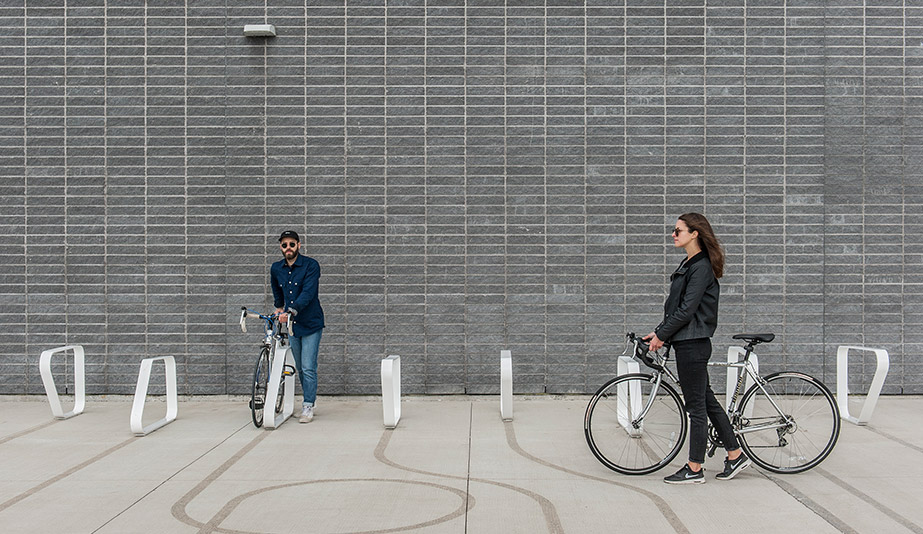 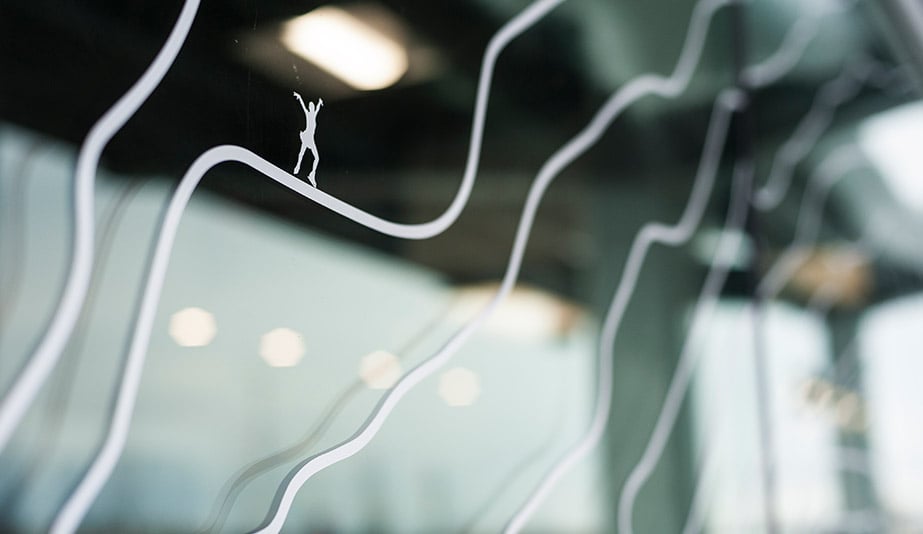 With the recent completion of a community four-pad ice arena, the city of Dartmouth, Nova Scotia, allotted one per cent of the building’s development fund to commissioning a permanent public art installation. Halifax’s Passage Studio’s proposal won out with a three-fold concept that took inspiration from the country’s national winter sport and the area’s unique landscape. 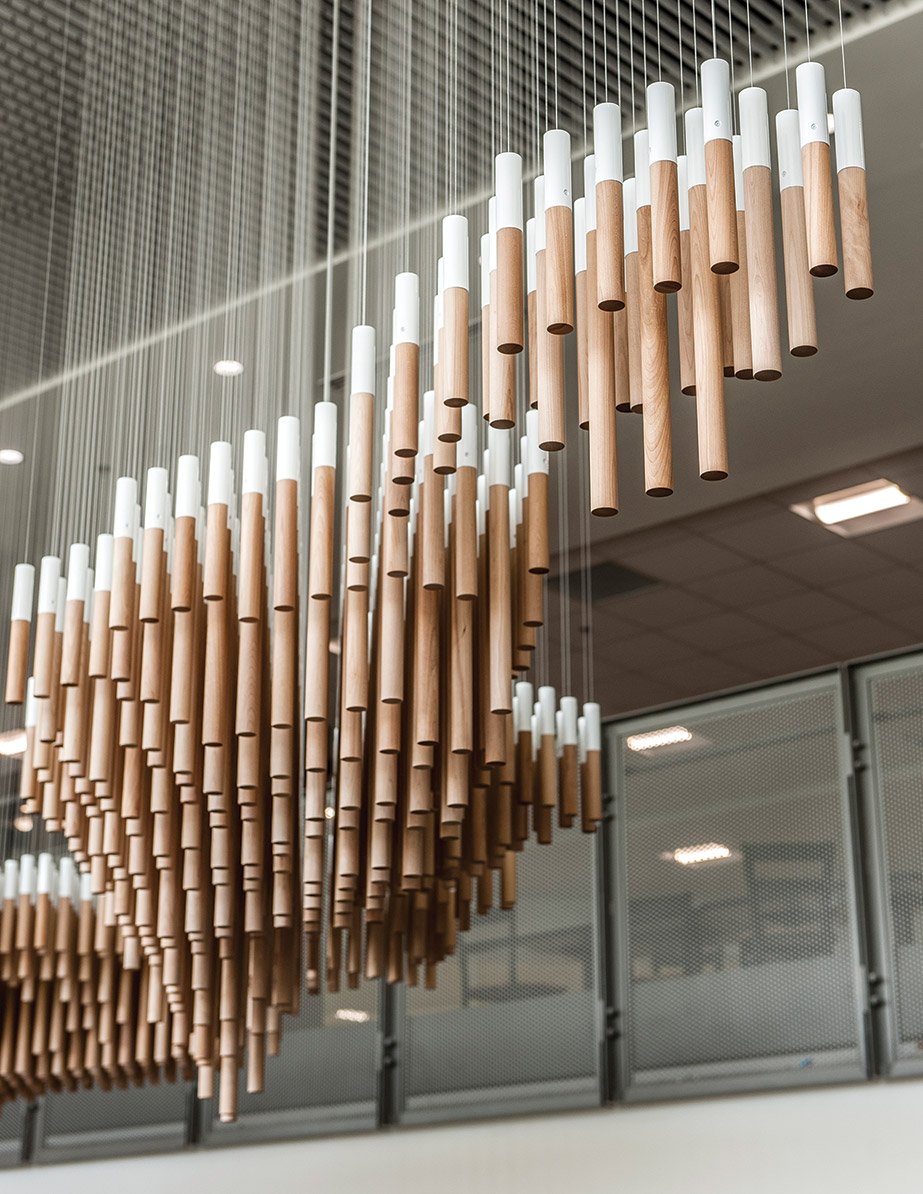 The studio’s design involved three separate yet complementary elements: a suspended sculpture in the main lobby, a graphic window wrapping and a collection of exterior bike racks. Sounds simple enough, but the details contained in each aspect – collectively dubbed City of Lakes – reveals the studio’s appreciation for the past and a thoughtful commitment to community.

Founded in 2015 by Jonathan Mandeville and Thomas Evans, the multidisciplinary Passage Studio seamlessly merges the fields of architecture, art and graphics with product and furniture design, consistently striving to explore traditional practices with a contemporary mindset. This considered approach is evident in City of Lakes. 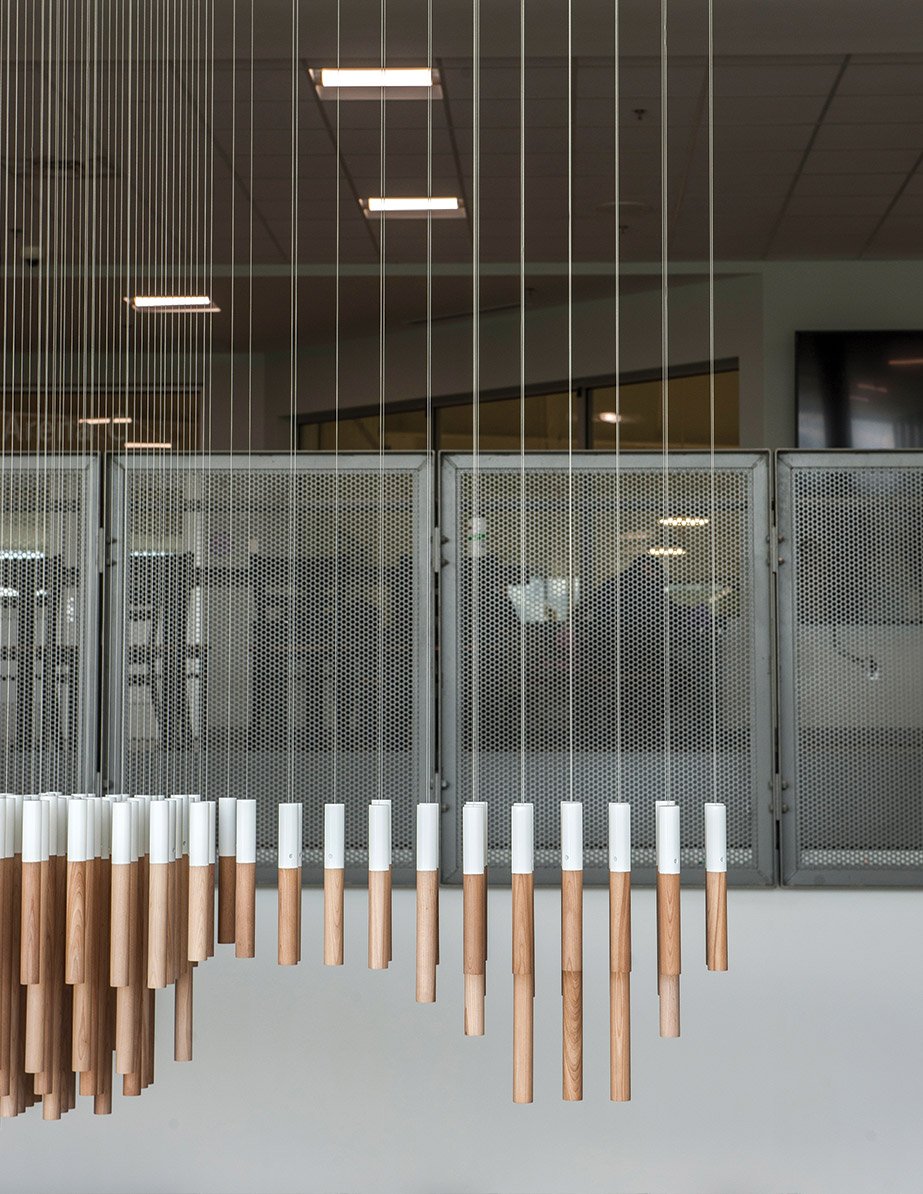 “The idea was to bring a sense of the origins of skating into a modern, high-tech building,” says Mandeville. It’s a common belief that hockey was born on the lakes in and around Dartmouth, and it was these lakes Passage turned to for the installation’s most prominent piece, a dynamic sculpture suspended in the main double-height atrium. Looking to three lakes in particular – Lake Banook, Sullivan’s Pond and Lake Micmac – Passage used bathymetric data to recreate the varying depths of each, mapping them out to form the undulating piece. 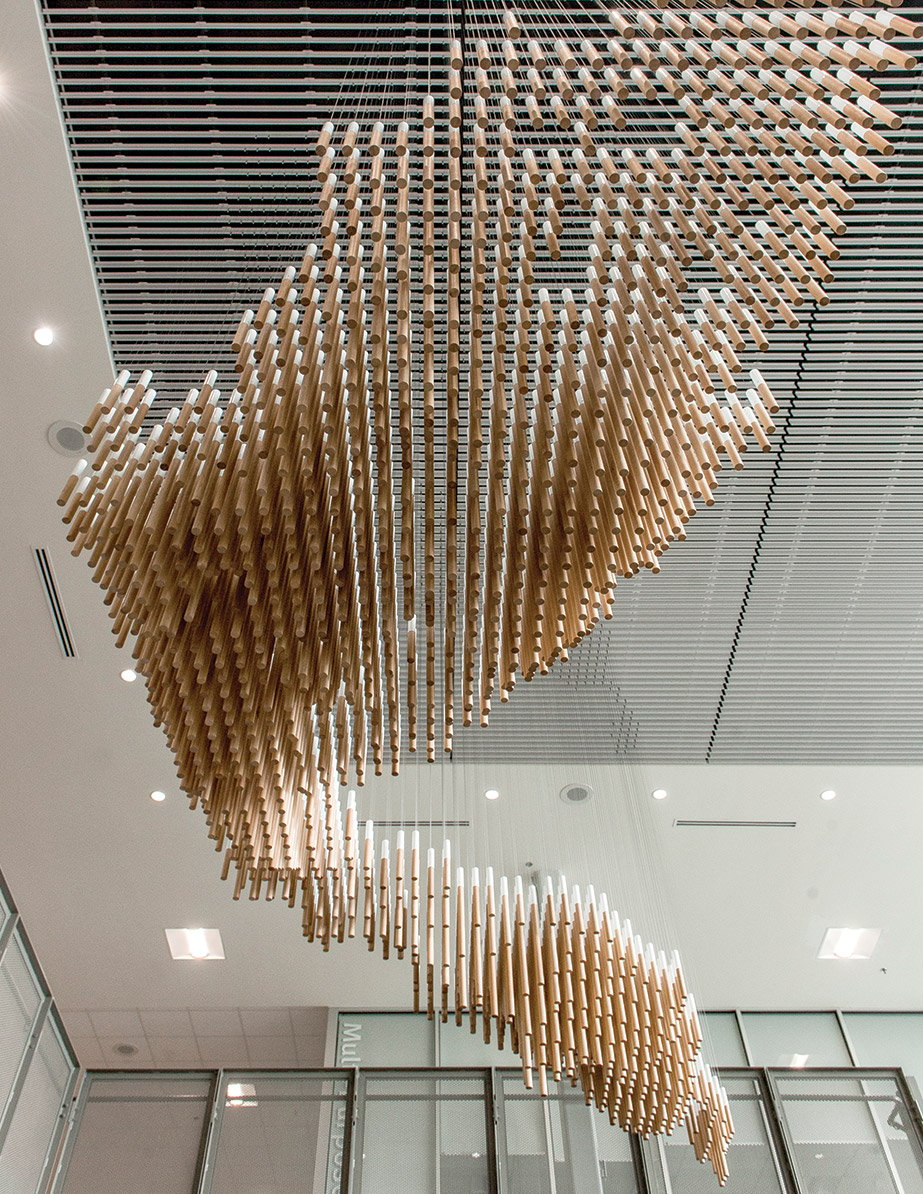 Made from upwards of 1,800 yellow birch dowels – a species chosen for its roots with hockey, as this was the wood Mi’kmaq used to make their hockey sticks – the wavy form hovers over visitors. At first glance, the sculpture appears solid and heavy, but moving underneath it, one can see it’s actually rather porous and allows light to filter through. Passage Studio worked with Toronto furniture-maker Hollis+Morris to manufacture the pieces, which were cut to varying lengths and capped with white powder-coated aluminum. Viewed from above, the feature takes on a completely different aspect that reflects the changing nature of the lakes themselves. 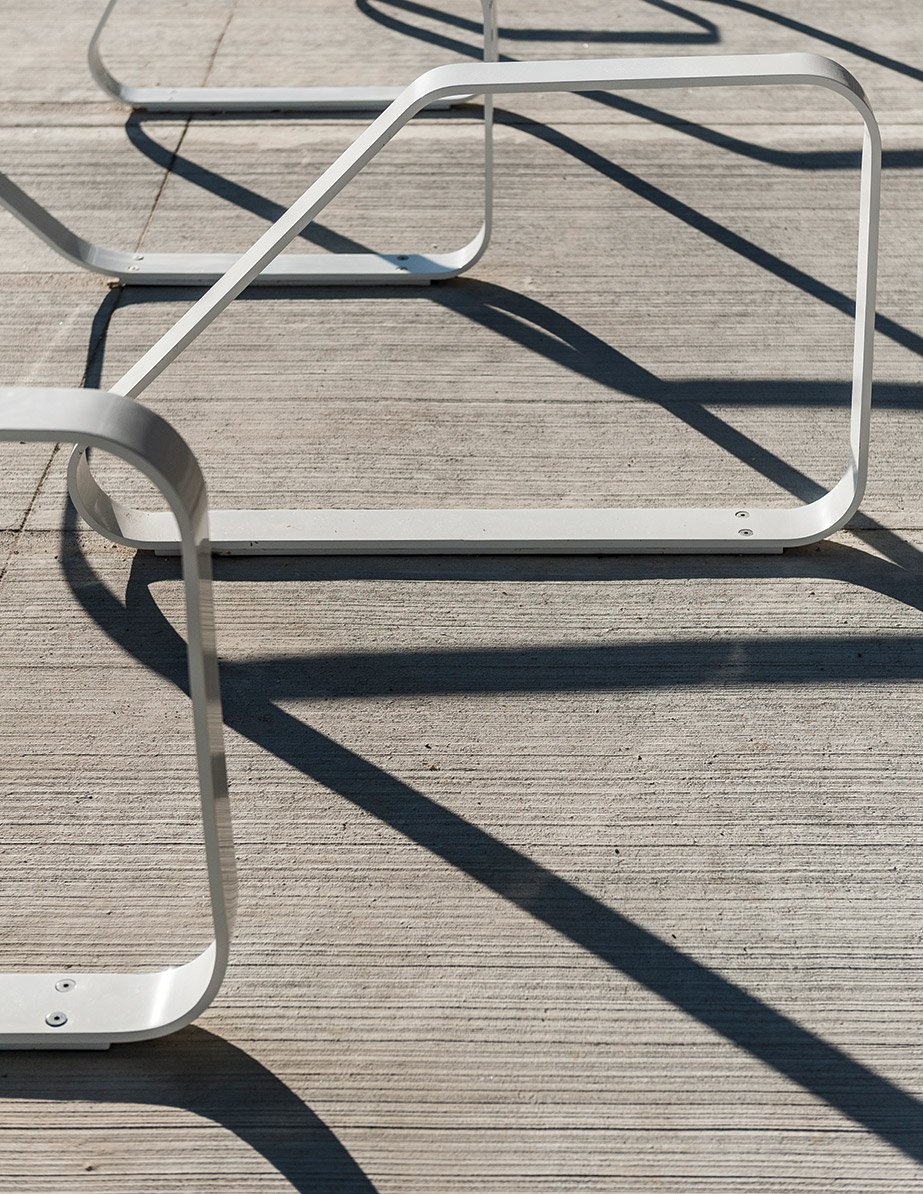 The ensemble’s second aspect is a series of exterior bicycle racks whose shapes are abstractions of the original Forbes skate blades made by Dartmouth’s Starr Manufacturing Company, a world-leader in the ice skate industry from the late-1800s until 1939. The 30 welded, white-powder-coated aluminum loops (also made by Hollis+Morris) are highlighted by sandblasted etched lines in the surrounding concrete that cut a pathway to each one, “alluding to the curvilinear traces left by a skater on the ice.” 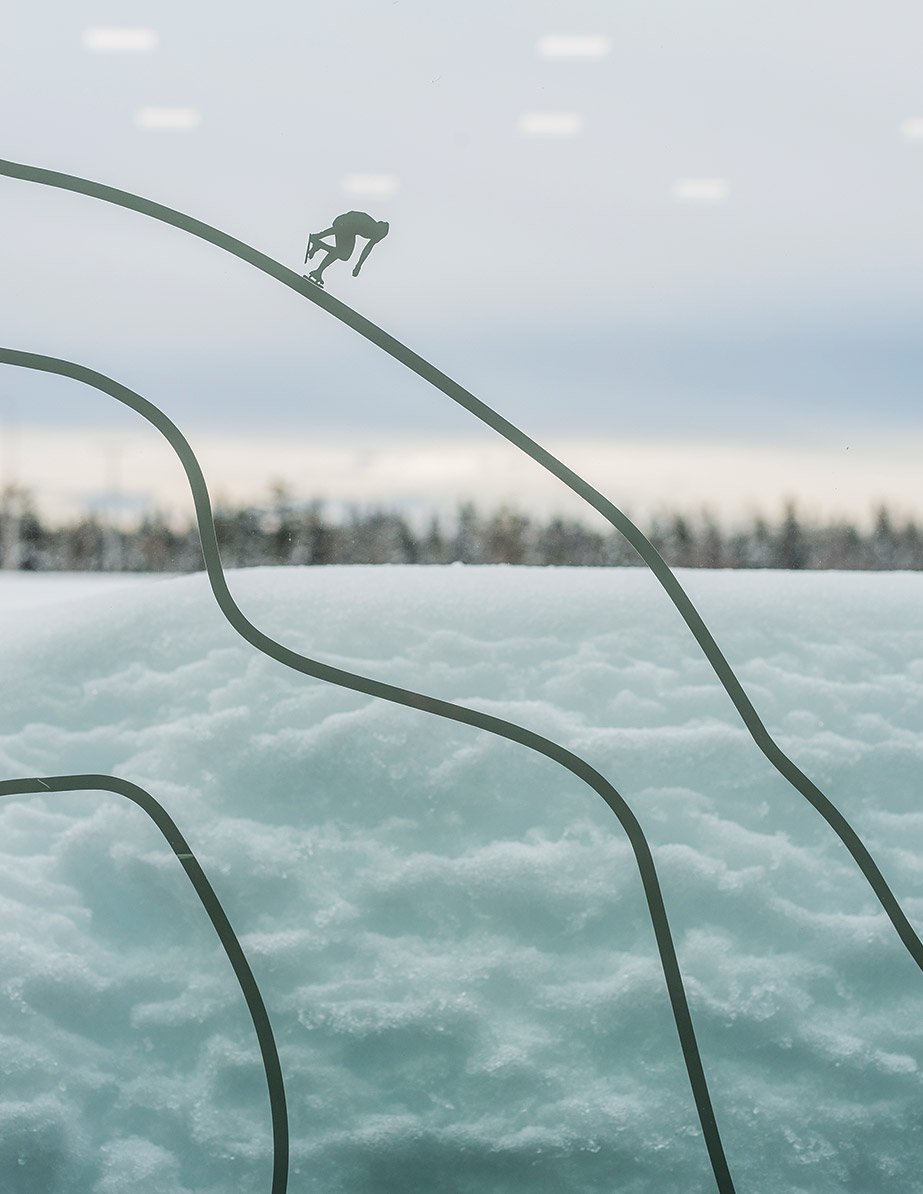 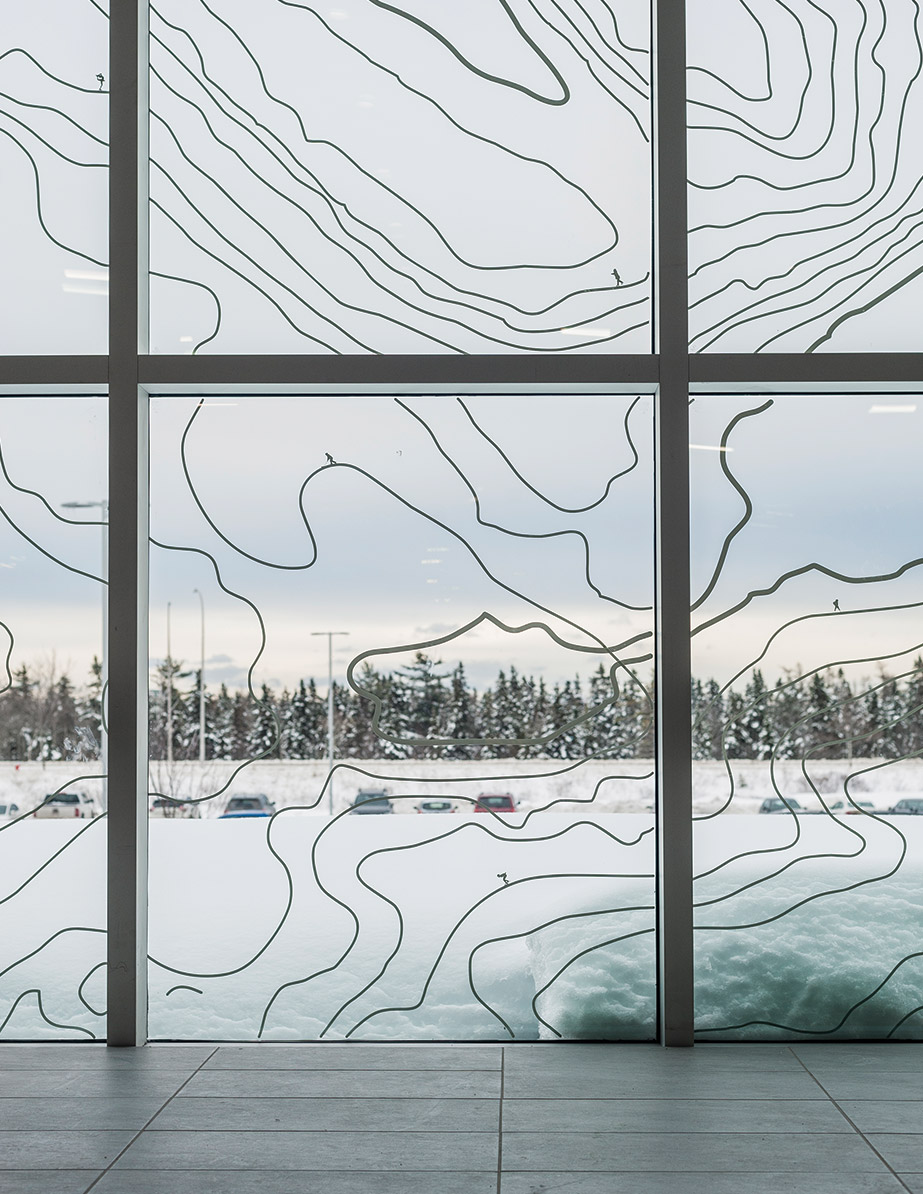