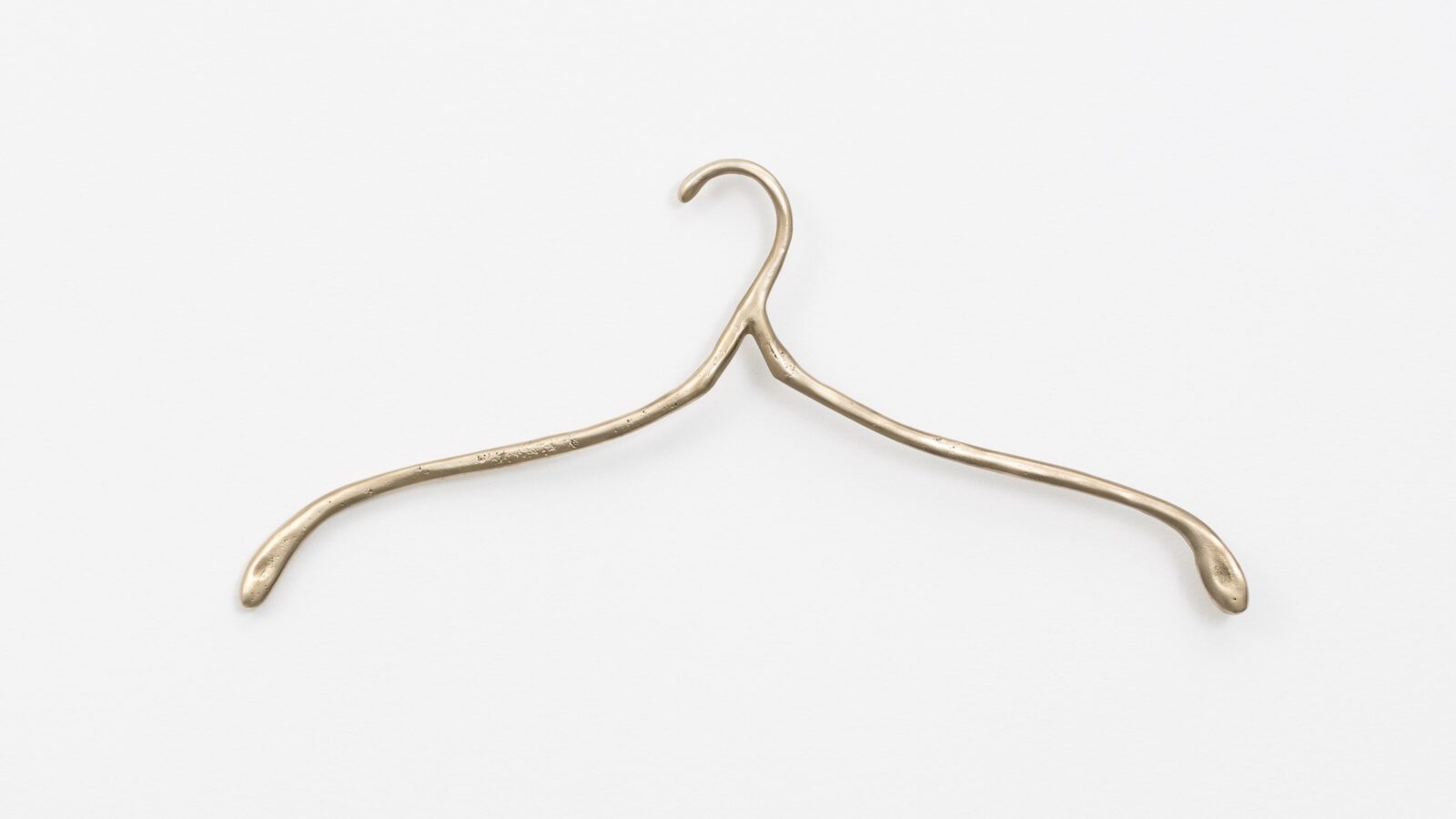 A distorted, haphazard beauty elevates the OAO Works coathanger into a work of art.

What’s in a coat hanger? For Omer Arbel’s studio there evidently is quite a lot. Like Achille Castiglioni, who found endless inspiration in everyday objects, Arbel has tapped into the mundane to produce the exceptional. But unlike Castigilioni, who had a talent for the unexpected elevation – think car headlight or tractor seat – Arbel’s talent is the engineered accident.

OAO Works is the umbrella for a collection of objects produced by Omer Arbel Office – the Vancouver-based architecture and design firm helmed by architect Omer Arbel. Arbel is also co-owner (with Randy Bishop) and creative director of the lighting company Bocci, based in Vancouver and Berlin. The OAO Works project is a loose assemblage of objects that derive from experiments and/or relationships. So far it consists of a vase made of glass and metal mesh, beeswax candles, a glassware collection, a brass vessel and the hangers. Unlike for traditional manufacturing, OAO’s interest lies not so much in the final product as in the investigation. Every form in the OAO Works collection is arrived at through a complex study of materials, process or theory.

In conversation with Omer Arbel when he was designing the trophy for the 2016 AZ Awards, he remarked that everything he creates is a bit ugly – but ugly isn’t really the right word. It’s a stand-in for the consistent non-uniformity of his objects, whether lighting products for Bocci, architectural explorations or, in this case, coat hangers. Most of his work involves a haphazard quality – a happy accident that is actually engineered. The hangers are the result of a 3D scanning process that has been deliberately distorted. The resulting sculptural forms are used to create a mould that molten brass is poured into. Each of the four hangers in the set has a distinct form.

The project is called 89 Hanger following Arbel’s numerical naming convention for all his work, whether in production or experimental. (His 2.4 chair in cast resin catapulted him onto the design scene in year 2003 and his 14 light, a cast glass sphere, successfully spawned Bocci.) The hangers are so beautiful it would be a shame to hide them by hanging clothing on them. They seem destined for a starring role.

A clever, triangularly shaped cardboard box contained the set of four hangers. Despite a profound interest in the haphazard, Omer Arbel Studio is hyper aware of details. Yet, an unintended aesthetic accident was found in the punctured and crimped kraft-coloured material protecting the triangle inside the shipping carton.

Turns out it is made by an industrial shredder called a Cushion Pak C 316 that Bocci uses to turn discarded cardboard into recyclable void filler. Somehow the exquisite sculptural hangers and the topographical or even parametrical aspect of the packing material produce a wonderful synergy. Accidental bliss.

A distorted, haphazard beauty elevates the OAO Works coathanger into a work of art.