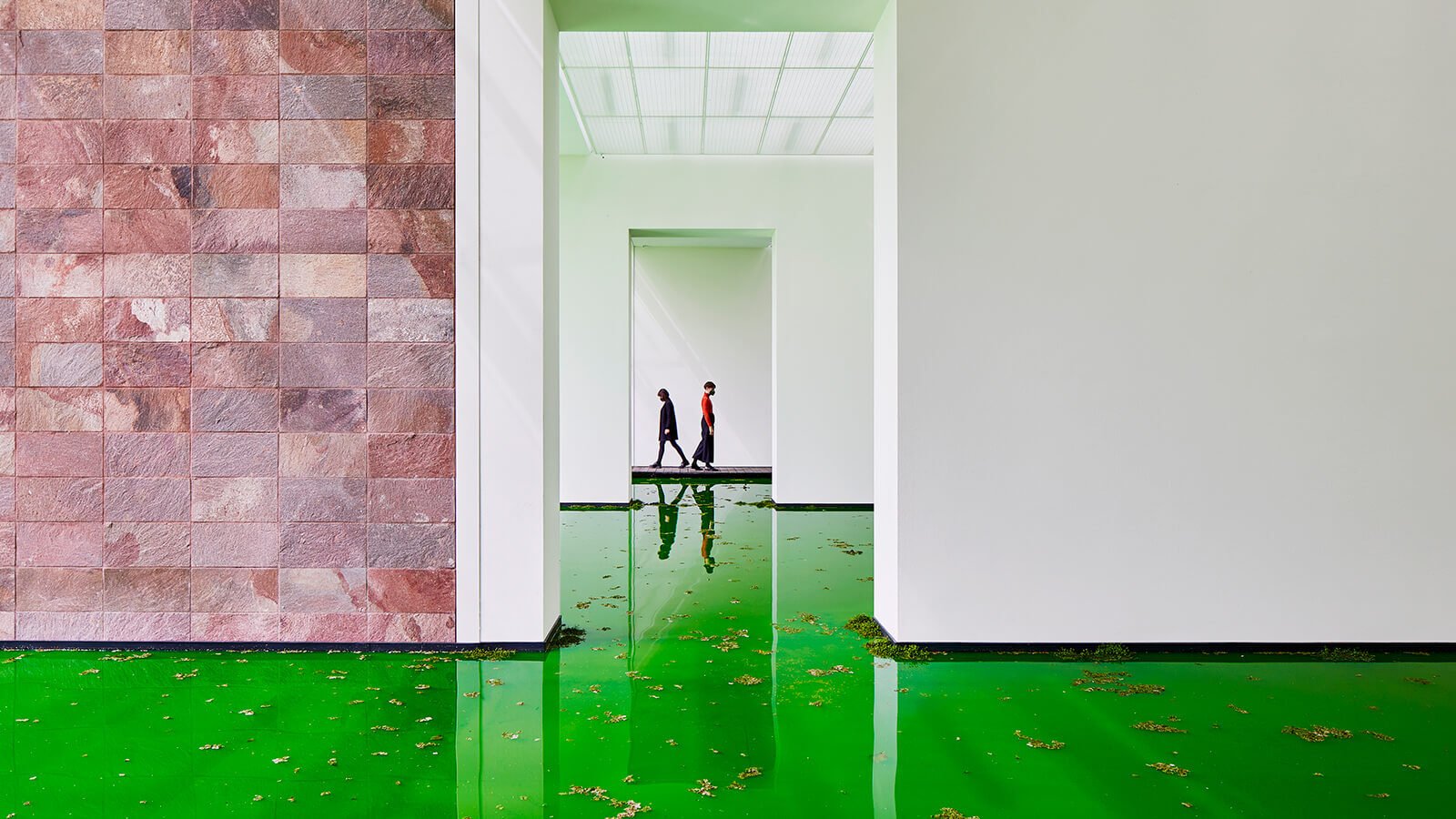 “Who made this planet livable and breathable for animals like us?” asks anthropologist Natasha Myers in her essay “How to Grow Livable Worlds: Ten Not-So Easy Steps.” The answer: photosynthetic organisms — those that create oxygen, most often plants. This notion is at the centre of artist Olafur Eliasson‘s new biocentric installation, Life, at the Swiss Fondation Beyeler. 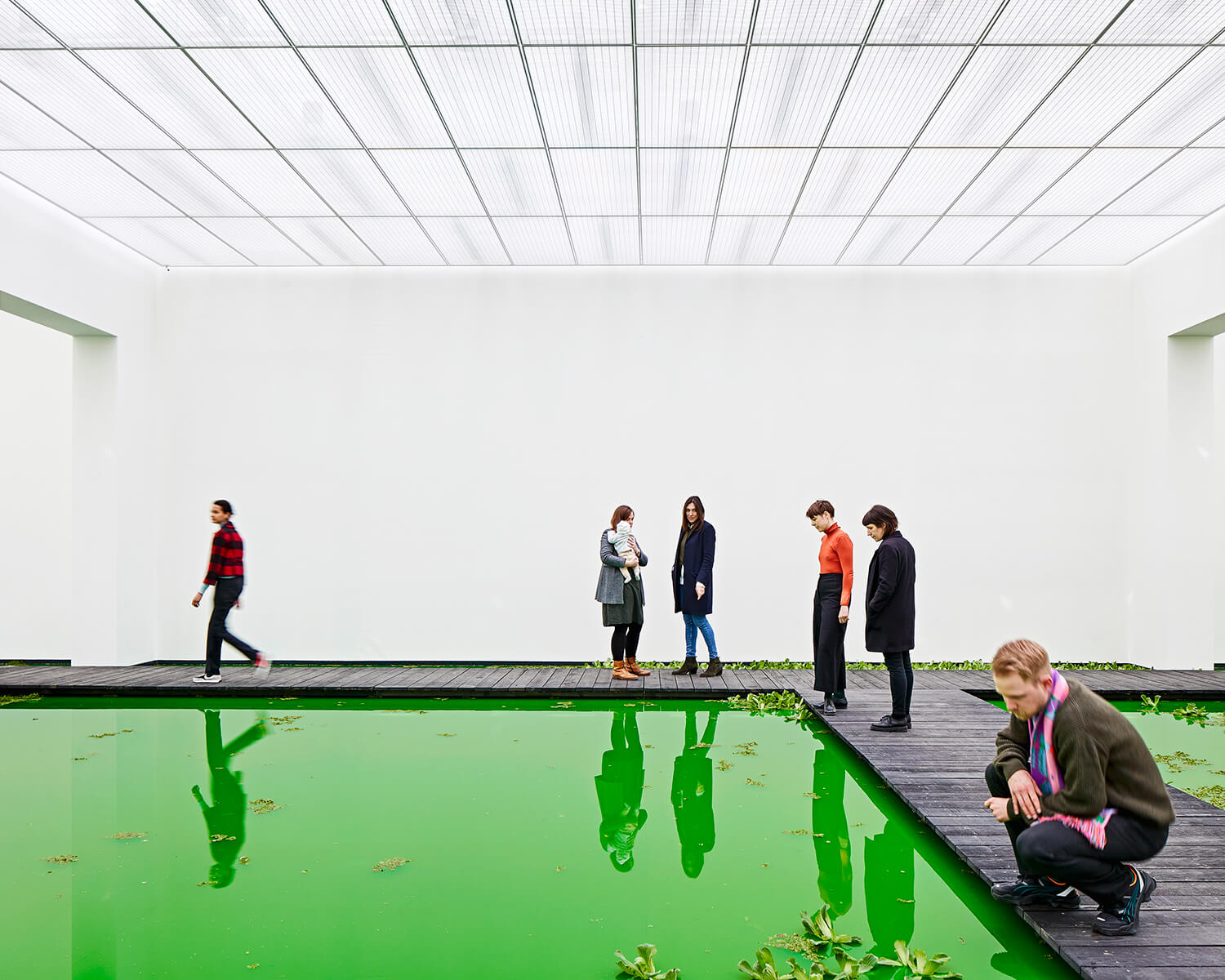 In an act that he describes as “caring,” Eliasson removed most of the windows from the museum’s main gallery, allowing the nearby pond to spill into the building’s interior. The resulting impression is one of openness, unity and harmony with nature. The flooded gallery’s bare white walls provide an almost ironic backdrop, as art takes place, unconventionally, below the visitor’s feet. 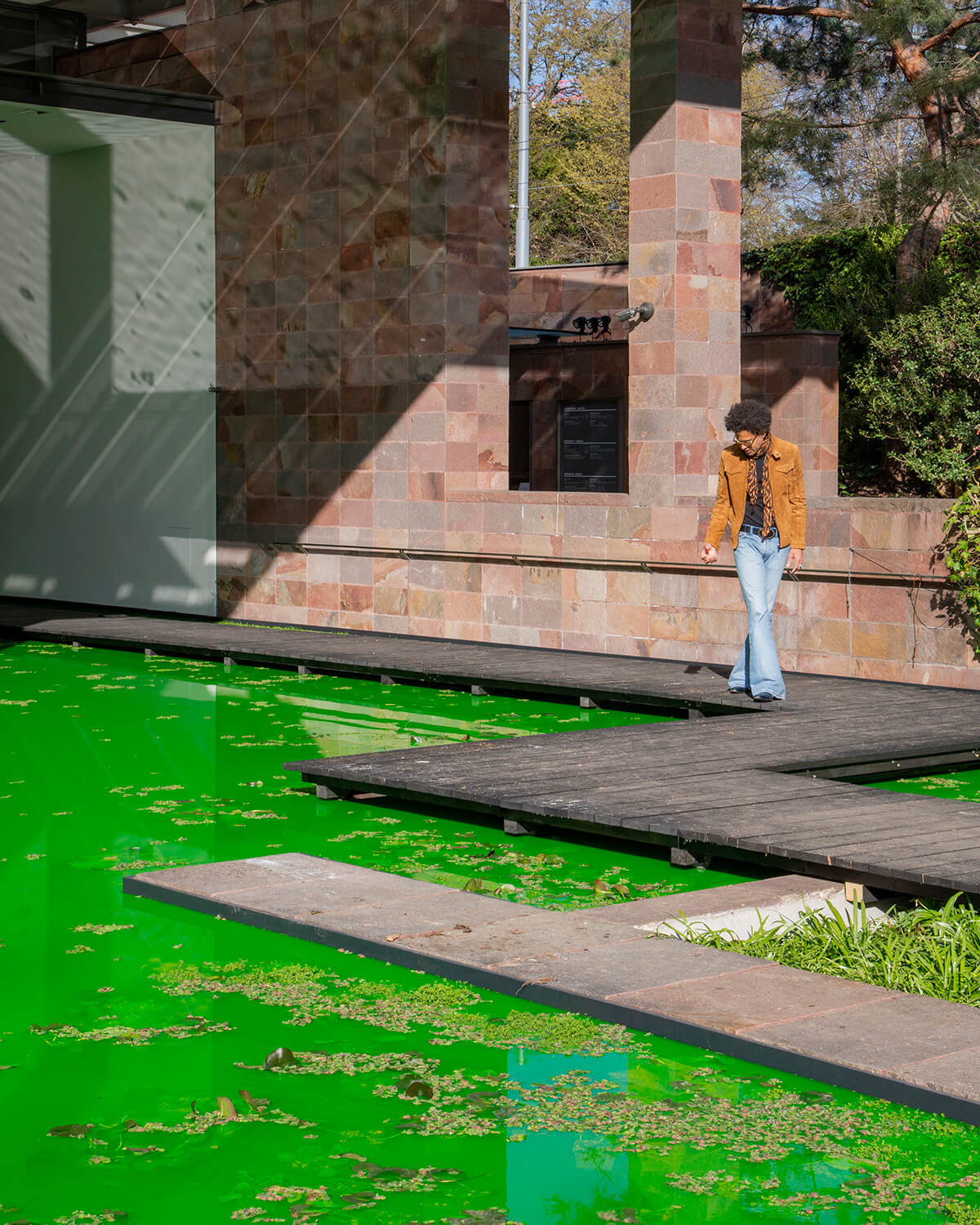 The theme echoes the contentious question at the centre of this year’s Venice Biennale: How Will We Live Together? Increasingly, artists and architects alike are pondering the limits of human life on Earth, and considering a return to a more holistic co-habitation with our fellow planet-dwellers. The Danish-Icelandic artist explains: “With Life, I worked actively to create a space of coexistence among those involved in and affected by the exhibition.” 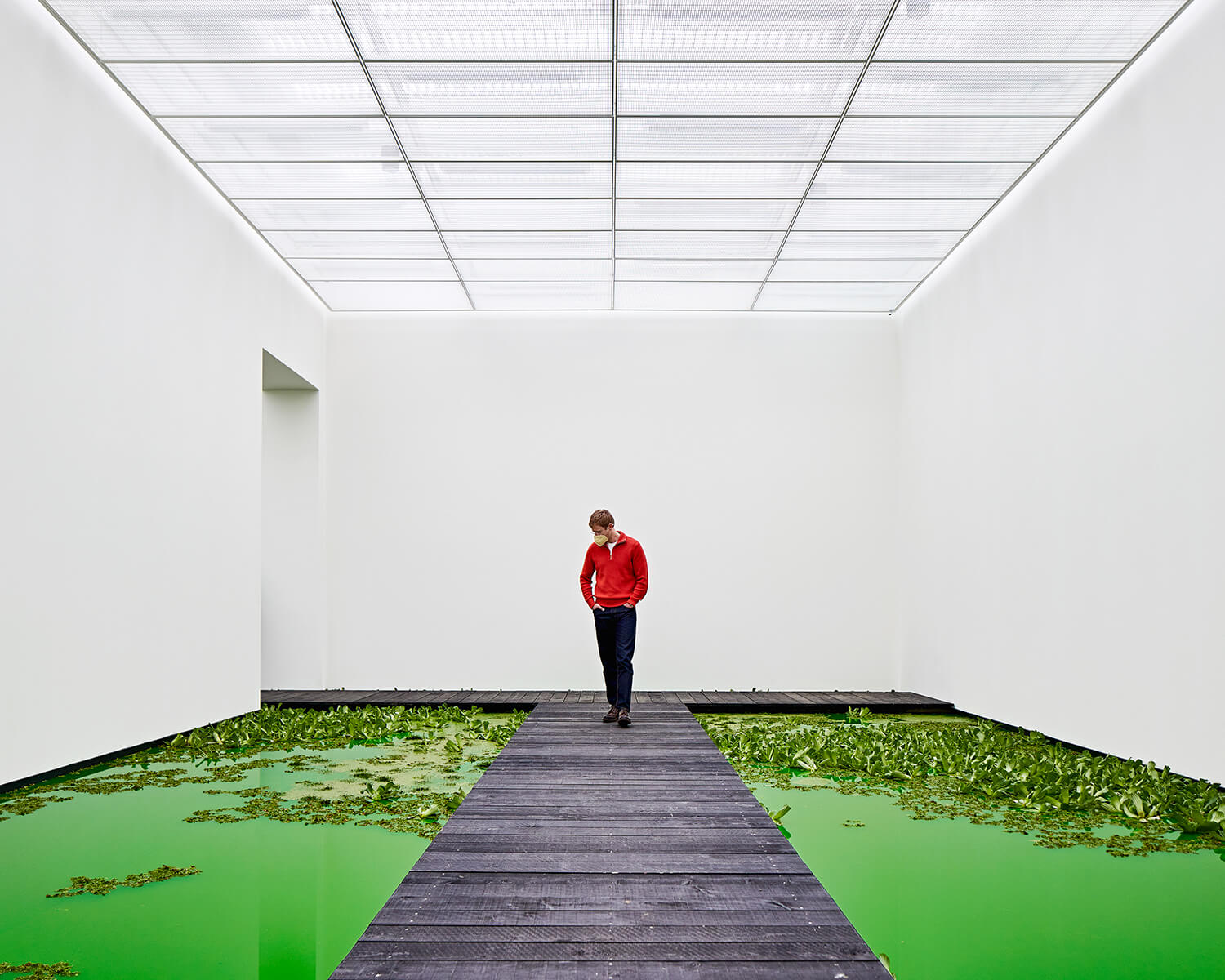 The space — which is open to all, day and night — takes the shape of a “planthroposcene”, containing water lilies, shell flowers, floating ferns, and various other shallow water dwellers (most of which were native to the existing pond), that dialogue with both ephemeral human visitors and centuries-old vegetation surrounding the site. 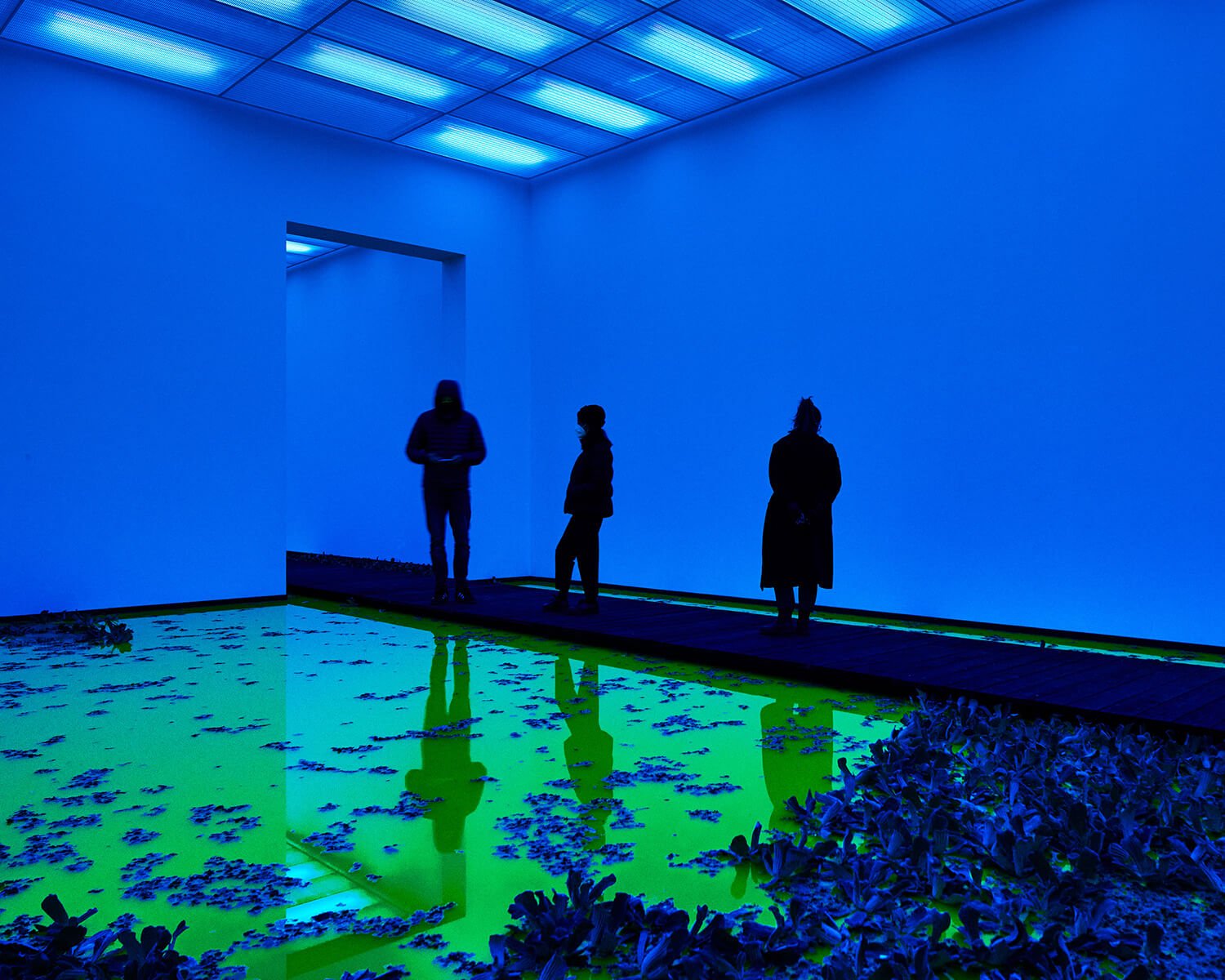 A fluorescent dye, called uranine, was added to the pond water to give it a bright green, radioactive hue. Due to the addition of ultraviolet light, the exhibit at night is less of a quiet marsh and more of an immersive, otherworldly light show. This contrast between light and darkness is central to Eliasson’s oeuvre; in 2003, his marquee work The Weather Project employed a semi-circular screen to imitate the blazing sun. 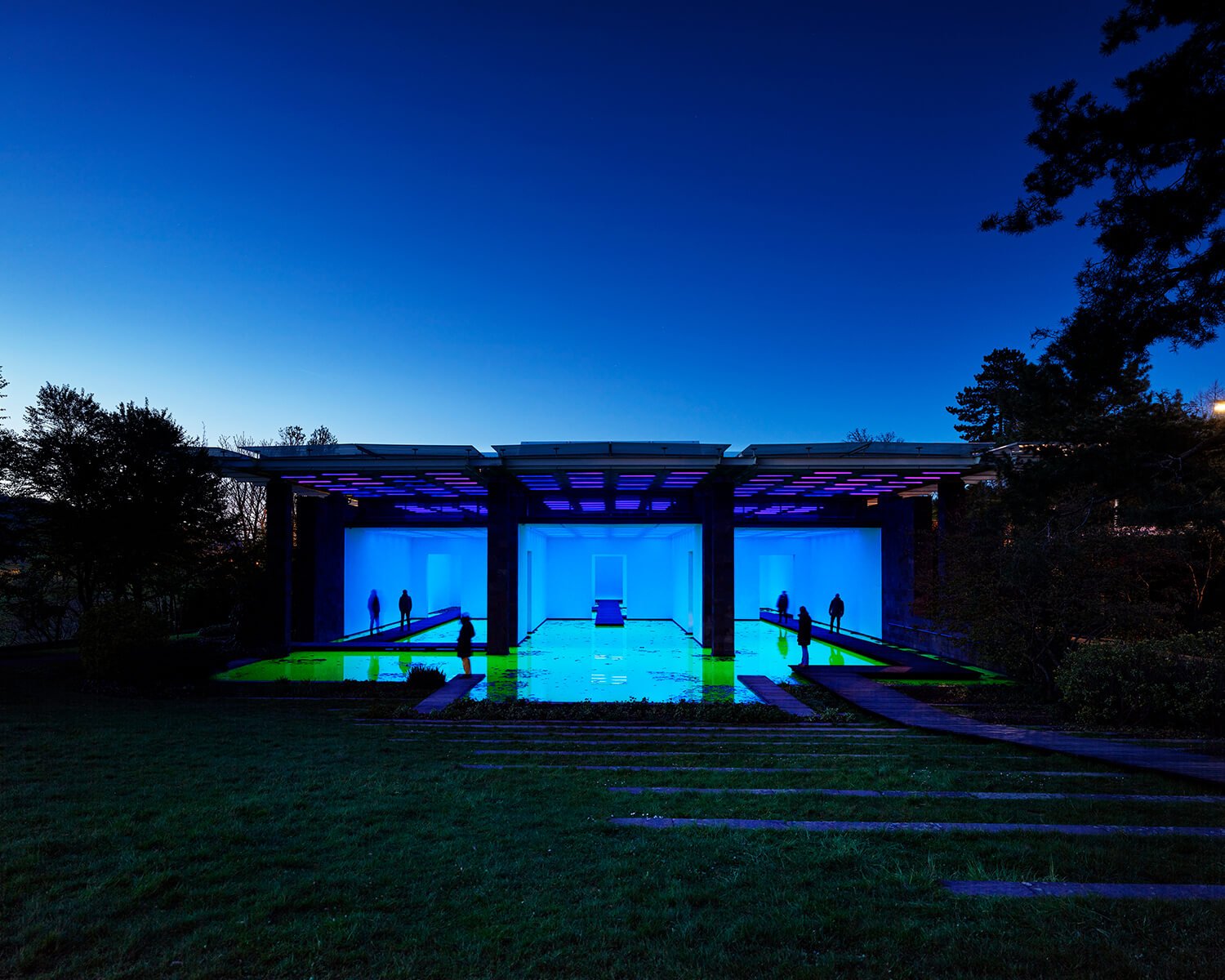 A variety of sights, smells and sounds envelop the space, including the ambient noise of insects as well as the smell of stagnant water and growing plants. A number of routes are possible along the wooden planks, allowing museum-goers to meander at their leisure and take in each space. Eliasson’s intention was to involve potential visitors (human and non-human alike) in the creation process — even their own reflections in the water are to be considered part of the ever-changing nature of the exhibition.