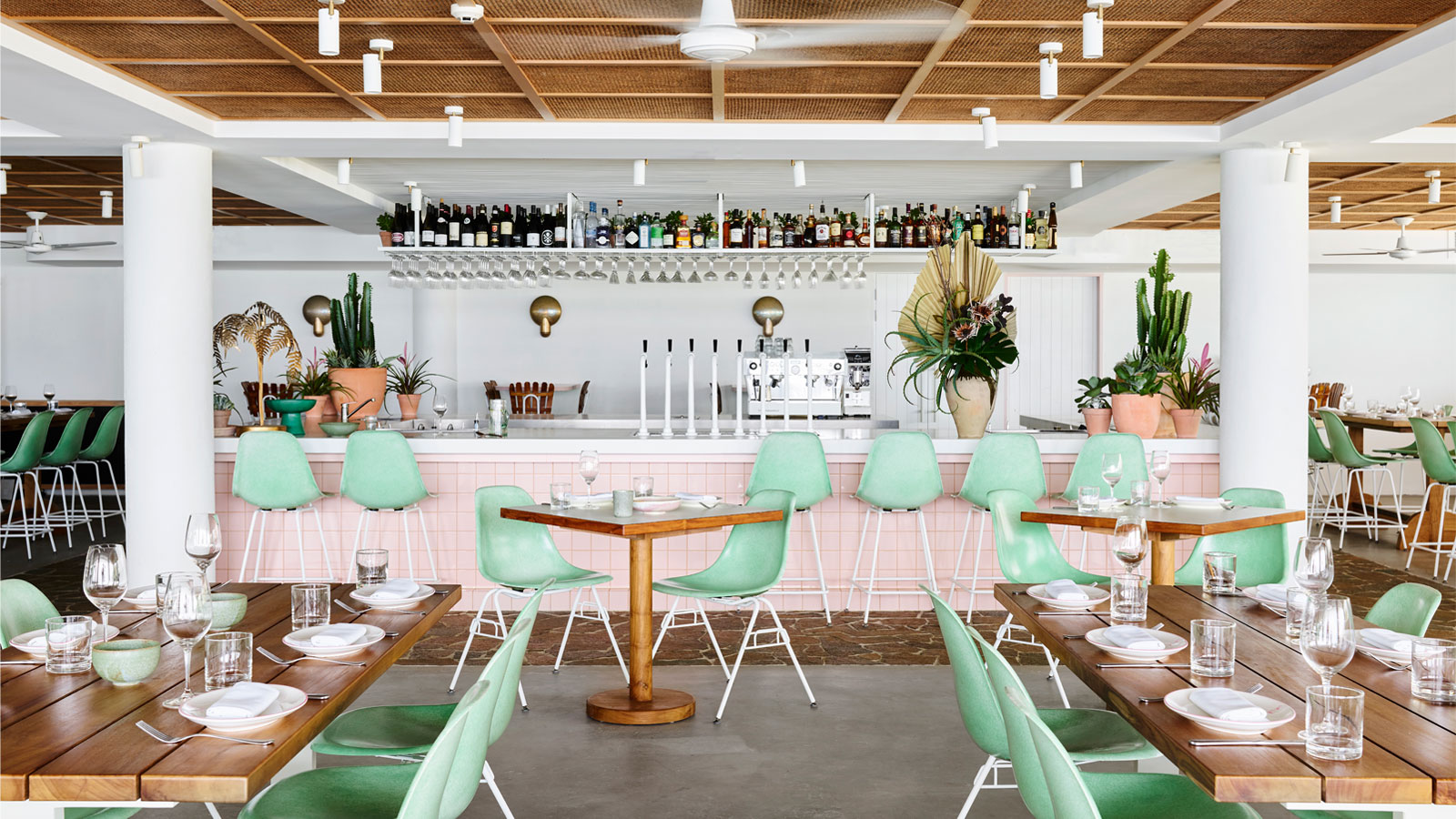 On Australia’s Gold Coast, an Aging Beach Pavilion Gets a Second Life as a Retro-Cool Surfside Restaurant

Beach pavilions have iconic status in Australian culture, akin to grain silos on the Canadian Prairies or windmills in the Netherlands. The low oceanside buildings have been sheltering swimmers and surfers since at least the turn of the 20th century, when a curious ban on daytime ocean bathing was lifted. One such structure, the Burleigh Pavilion on the country’s Gold Coast, offers panoramic views of a world-famous surf zone and is situated at a historic indigenous meeting point, but had seen better days until recently. Thanks to a dynamic overhaul and expansion by Sydney-based architecture firm Alexander & Co, it now has a new lease on life and an entirely new function as a sun-drenched seaside restaurant.

Make that restaurants. To accommodate a wide range of diners, from “guests who walked straight off the beach to those enjoying a smart lunch or dinner,” Alexander & Co divided the 1,200-sqaure-metre venue into three distinct spaces: an à la carte restaurant known as The Tropic, a terrace bar called The Pavilion and a main outdoor beach bar.

“Creatively,” says the firm, “the client wanted the project to evoke memories of his childhood spent holidaying in [the town of] Burleigh Heads, a 1970s Gold Coast beach nostalgia.”

To that end, the design team incorporated such evocative retro-cool elements as rattan ceiling panels, burnished brass wall sconces, soft pink tilework and pistachio-toned seating. In order to reinforce the pavilion, which was built in the 1980s atop a fifties-era swimming pool, the number of existing columns was doubled through the creation of a new steel superstructure and concrete framework.

A central feature of the new operation is a large open kitchen from which all three dining spaces radiate. Containing two pizza ovens and a fire pit, this “hive of gastronomic energy” sits within a curving masonry arbour, “a nod to past pavilion structures once dotted up and down the coast.”

Of the three dining areas, the restaurant known as The Tropic, which the designers describe as a “coastal brasserie,” is the most intimate and detailed. Clearly delineated by “its rattan ceiling, crazy paved floor and pink and brass highlights,” it’s the “sexy older sister” of the main beach bar and Pavilion terrace bar.

By contrast, the terrace bar, which is located to the south of The Tropic, is a semi-open expanse distinguished by painted concrete-block detailing and ample seating, including high metal bar stools tucked into “window nooks” perched over the water’s edge.

The main beach bar, finally, “has in scale and simplicity what The Tropic has in detail and intimacy. It is a vast open volume with expressed structures, views in every direction and robust energy underneath an umbrella canopy.”

Overall, the reimagined interiors of the facility more than do justice to their iconic setting, enhancing it without corrupting it. “Through its careful restoration,” say the designers, “the Burleigh Pavilion has reinvigorated the headland, community engagement and a local amenity, offering patrons of all demographics a place to gather, celebrate and enjoy the abundance of the Burleigh Heads horizon.”