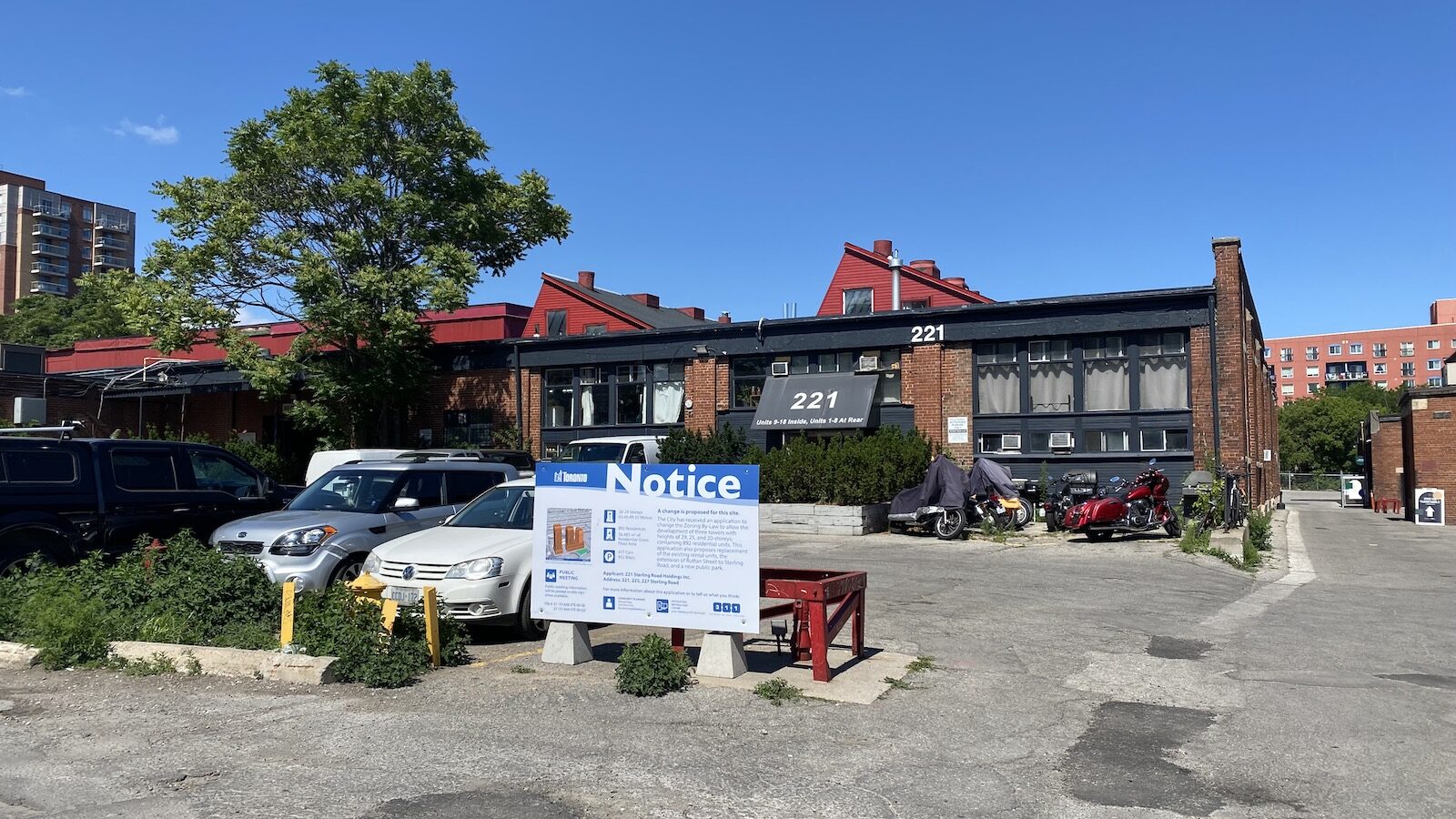 In one fluid motion, Rebecca Devi Leonard leaps from the floor and grasps the trapeze hanging from the tall ceiling, gliding through the air in a gentle spiral. We are in the kitchen of her home and studio, where the circus artist is suspended, and seemingly weightless, high above me. “You don’t get this in a condo,” she says with a smile.

You get it at Toronto’s Sterling Lofts, where Devi Leonard’s suite is one of the several dozen live–work spaces that comprise a diverse and intimate artistic hub, with 14- to 25-foot ceilings to boot. A haven for circus artists, dancers, painters, printmakers, industrial designers and just about everyone in between, the unassuming building houses a densely populated community at the heart of the Junction Triangle. Outside, however, City of Toronto signage portends a very different future for the site.

Reaching 29, 25 and 20 storeys, three residential towers with 892 units among them are planned. Led by a consortium of developers, the newly proposed project would see the building make way for a condominium complex. In a rapidly growing city already transformed by construction cranes, it’s hardly a surprising scene, with much of Sterling Road — and the Junction Triangle itself — slated for redevelopment.

A block to the south, condominiums and office buildings are poised to re-imagine the vacant sites surrounding the Tower Automotive Building, which now houses the Museum of Contemporary Art Toronto. And just northwest of Sterling Lofts, a trio of residential buildings are set to remake Bloor Street, replacing a commercial street-front and another long-vacant site. Once an overlooked, post-industrial corner of the city hemmed in by a pair of rail lines, the neighbourhood is becoming a hotbed of construction.

But while much of the surrounding development plans take over empty and relatively underused sites, the Sterling Lofts complex is already a locus of life. For starters, the live-work composition of the building’s residences means that many of the suites do double duty — and effectively house double the density — by combining commercial and living space. What’s more, the building’s purely commercial spaces welcome an equally varied repertoire of activity. Take the Pia Bouman School for Ballet and Creative Movement, a non-profit haven where — pandemic notwithstanding — dancers teach classes and then take over the stage, along with other creatives, during off hours. 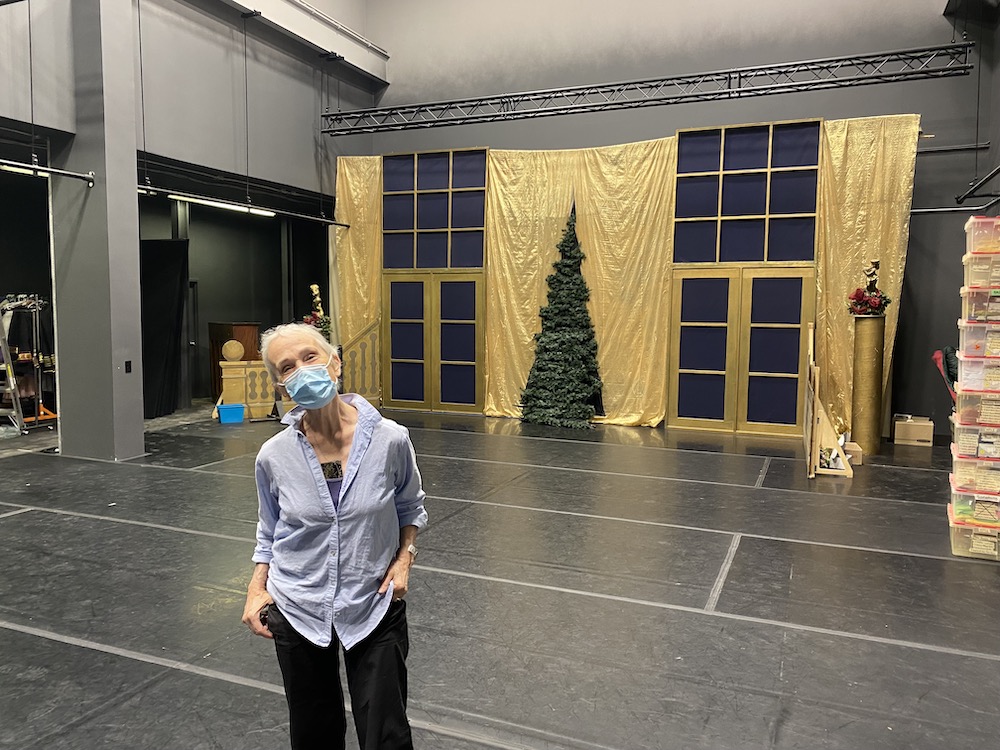 Pia Bouman in the small theatre still outfitted for a production of The Nutracker cancelled due to COVID-19.

“Our space is also used by actors and theatre artists,” says Bouman, listing off an impressive gamut of rehearsals, which range from the expressive and experimental tiger princess dance projects to the Indigenous-led Red Sky Performance troupe. A similar spirit of collaboration permeates the whole of the complex, fostering a shared hub of creation.

“The lofts offer space for people who both live and work in their units, but most of the commercial units also support many businesses,” says resident Andrea Lothrop. “The printmaking co-op in the back of the building supports all of its members by providing space for them to create for their business, and the same goes for the building’s multiple wood-working spaces. These aren’t individual businesses who are operating out of one unit, it’s one unit housing multiple businesses, often working together as a community.”

What would redevelopment mean for all that vibrancy and collaboration? While City of Toronto rental-replacement regulations dictate that all existing residential units must be replaced as part of any new development, the long process of demolition and construction risks tearing apart community ties. “Any interruption — in either architecture or time during construction — would be a huge disruption to those communities,” says Lothrop, who moved to Sterling Lofts in 2014. More fundamentally, the informal nature of many established live-work arrangements means some residents risk being missed in the count. (While the development application cites 23 live-work units and 33 rental replacement suites, the exact number varies as the use of space by residents and tenants evolves, with a 2008 Now Magazine article citing the legal creation of 60 live-work suites in 1999.)

For Toronto’s artists, the story is all too familiar. From the ongoing redevelopment of downtown’s Coffin Factory Lofts, where studios were vacated in 2019, to a mixed-income project at 880 Dupont and an ongoing proposal to demolish the studio spaces at 7 Labatt Avenue, future visions are increasingly at odds with existing live-work spaces. In a fast-growing city already inured to ceaseless construction, it’s an unsurprising phenomenon — and one that, by now, can seem almost inevitable. At Sterling Lofts alone, the current plan is merely the latest in a string of proposals for the site.

Cities change. As the spectre of development has continued to loom, the neighbourhood around Sterling Lofts has evolved. In 2018, the opening of the Museum of Contemporary Art Toronto put Sterling Road in the public spotlight, with the cultural institution making the area a draw for art-lovers and condo-dwellers alike. That same year, Sterling Lofts’ most famous occupant — the Cree painter Kent Monkman — moved his studio north to Eglinton and Caledonia. And just next door, the former transformer factory at 213 Sterling gradually saw live-work spaces replaced by purely commercial uses. Today, it’s also home to AZURE’s office. And stretching the timeline back further, Sterling Road’s own emergence as a hub of graffiti culture and street art was spurred by both de-industrialization and rising rents on Queen West. 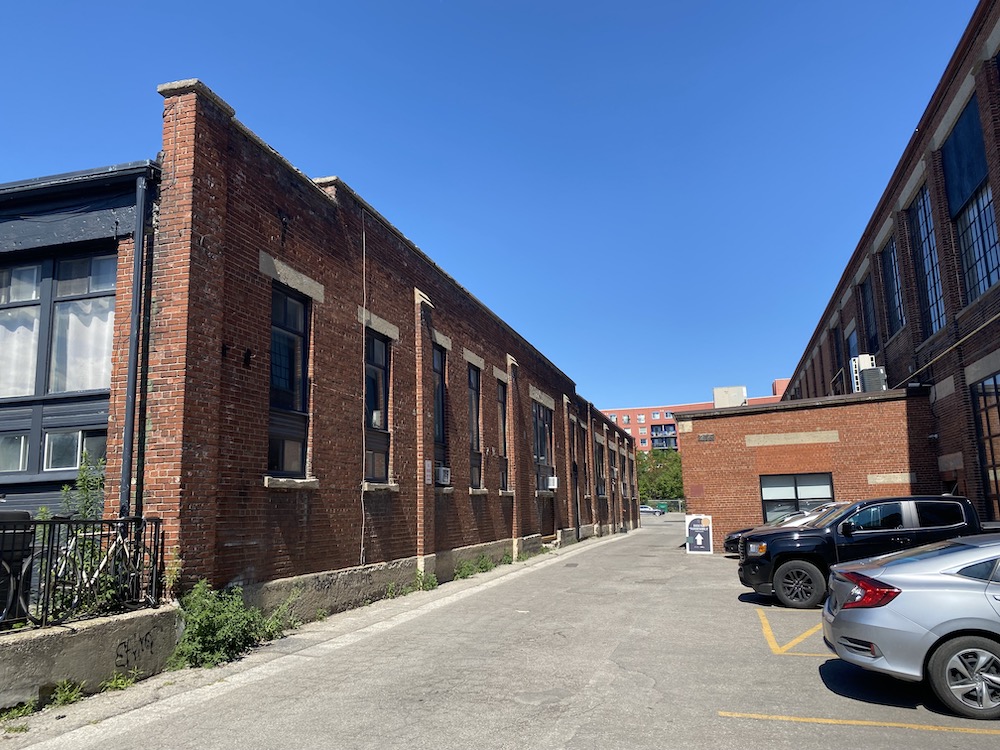 What does that mean for Sterling Lofts today? Redevelopment or not, the area’s — and the city’s — evolution feels inexorable. But how big change is regulated and channeled is another matter. Toronto’s growing population makes new housing crucial, but the ongoing demolition of vibrant, densely populated and historic buildings like Sterling Lofts is part an urban development pattern that is both carbon-intensive and socio-economically destabilizing.

While Toronto’s shrinking artist spaces face particularly acute redevelopment pressure, the shape of the city’s development increasingly sees already dense buildings demolished for denser ones. Near Yonge and Eglinton, for example, the modestly scaled — and relatively modestly priced — apartments at 55-65 Broadway Avenue are already vacated and soon to be demolished for towers, as mid-rise office buildings on Eglinton also make way for new skyscrapers. Just north of Bloor, meanwhile, a recent proposal would see a handsome 12-storey rental building (dating to 1959) at 145 St George torn down for a 29-storey tower, while the 24-storey downtown apartment complex at 25 St Mary could soon make way for a conjoined pair of 59- and 54-storey buildings.

Assessing the plans for St George and St Mary streets, Toronto Star writer Shawn Micallef points to the carbon costs. “The climate implications of tearing down perfectly good buildings are profound here as the embodied energy and materials that went into building these two will be wasted, and more energy expended to destroy them,” he writes. What’s more, even with rental replacement laws that ensure a right of first return for former residents, the years-long process of moving out can be destabilizing. Not everyone ends up coming back.

A generation ago, Toronto looked different. At the turn of the millennium, the city’s nascent downtown condo boom transformed a sea of parking lots and empty land into new housing. From St Lawrence to CityPlace, soaring towers re-shaped the core, while urban stretches of Bloor-Yorkville, Yonge and Eglinton and the Entertainment District were similarly transformed by development. It made sense at the time. By replacing surface parking and former railway lands with glass towers, Toronto’s relatively transit-rich downtown grew by leaps and bounds, all while leaving most residential neighbourhoods relatively undisturbed. But these types of sites are now largely gone — either already redeveloped or earmarked for upcoming construction. Instead, already dense buildings are now making way for denser ones in order to satisfy the same growth pattern.

In the end, however, the planners and politicians may (wisely) reject many of the current proposals, including the plan for Sterling Lofts. But in a growing city where the bulk of new housing is restricted to already dense communities, buildings like these will continue to face the threat of demolition. And if the recent past is any guide, many will indeed be destroyed. 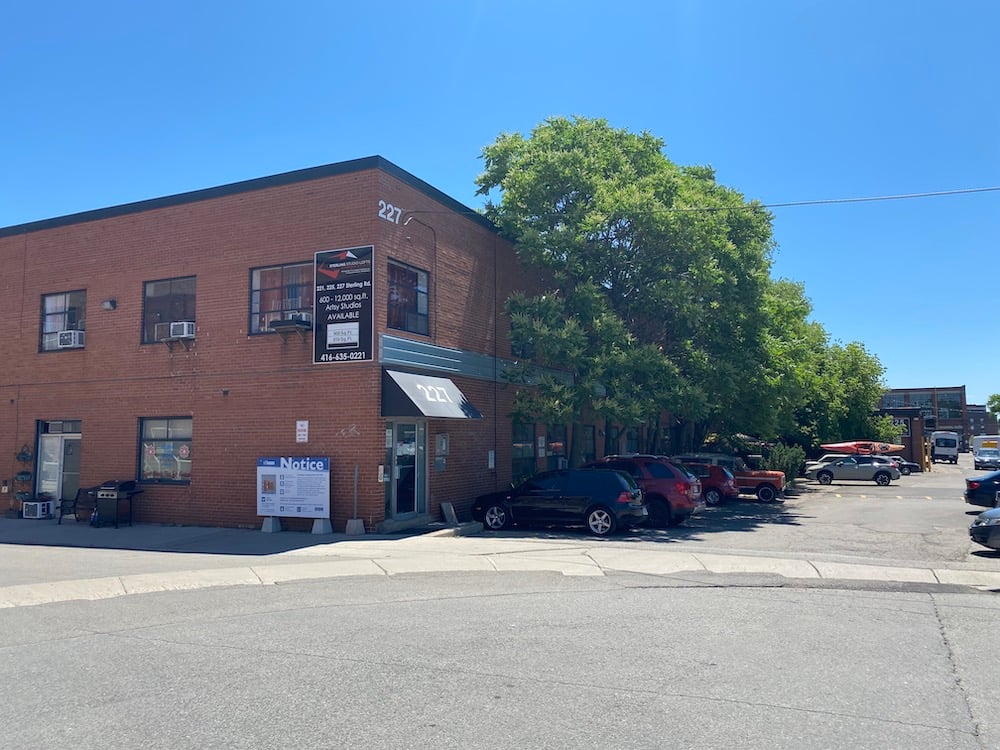 It doesn’t have to be this way. While Toronto zoning by-laws and land use regulations see density concentrated in small pockets of soaring towers, sparsely populated neighbourhoods of single-family homes remain largely unchanged, even as population actually drops in many parts of the city. All the while, the City’s push to promote mid-rise density along major streets is hampered by strict height restrictions and angular plane guidelines, all in an attempt to protect nearby houses from tall buildings and their shadows. The result is more complicated, carbon-intensive development — but fewer homes.

Ironically, Pia Bouman has intimate knowledge of this type of failed densification as well. On Parkdale’s Noble Street, on the site of her former dance studio, a proposal for a 14-storey building promised to re-incorporate her business at its base. She would have been happy to stay — even through the inevitable complications of temporary relocation. “I was thrilled they made a space for us,” she tells me. The proposal, however, was eventually reduced to eight storeys and the school was cut from the plans. “If they had the extra storeys, we’d probably still be in the neighbourhood,” Bouman says. It wasn’t development that pushed the school out of Parkdale so much as development done badly.

As the setbacks and ziggurat forms mandated by Toronto’s Mid-Rise Design guidelines face growing criticism, an ongoing push for greater missing-middle density in residential neighbourhoods similarly targets a growing housing gap. Weighed against the cultural and ecological costs of demolishing a hub like Sterling Lofts, our continued reticence to densify transit-rich, wealthy neighbourhoods like Rosedale and Forest Hill is hard to justify. In lieu of displacing artists and renters, why not let developers write homeowners a few more multimillion-dollar cheques? In lieu of displacing Bouman’s school, why not allow a few hours of longer shadows?

Ultimately, the inequity of Toronto’s development is rooted in more than misguided development policy. While the spatial pattern of hyper-concentrated density increasingly threatens buildings like Sterling Lofts, 145 St George and 25 St Mary, the demand for housing is pushed by everything from low interest rates to speculative investment, while soaring material and land costs move the bottom line further out of reach. In this type of environment, the most aggressive gentrification can happen without the removal of a single brick. And in an economy where shelter functions as a financial asset rather than a human right, the chronic lack of government investment in building real affordable homes is increasingly galling.

For all that, the immediate fate of Sterling Lofts rests on a simple question. If the development happens, the artists and residents will move out, and the dense and diverse community nourished within those century-old walls will almost certainly never be recovered. If not, they’ll stay, maintaining a small haven — at least for now.

Back in Devi Leonard’s studio, the artist descends from the trapeze and walks me out. In the tranquil, leafy laneway east of the Lofts, Devi Leonard introduces me to several of the neighbours. We all stop to chat. It’s a quiet nook of the city — comfortably shaded by vines and trees — that’s furnished by assorted chairs and tables and an atmosphere of easy hospitality seldom found in Toronto. In developer renderings and sleek urban visions, this type of space might be celebrated as a woonerf. Here, it’s just something that happened. We talk about the future. Redevelopment or not, the place won’t always be what it was, or what it is. For now, though, it’s still here. I’m due back at the office, but I want to stay just a little longer. 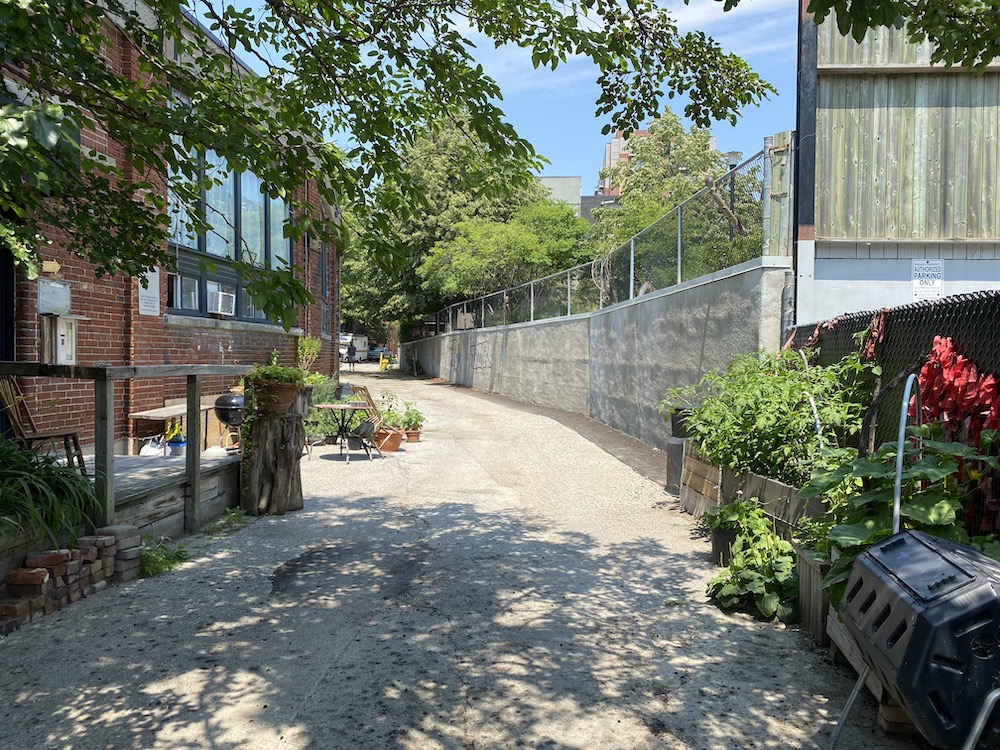