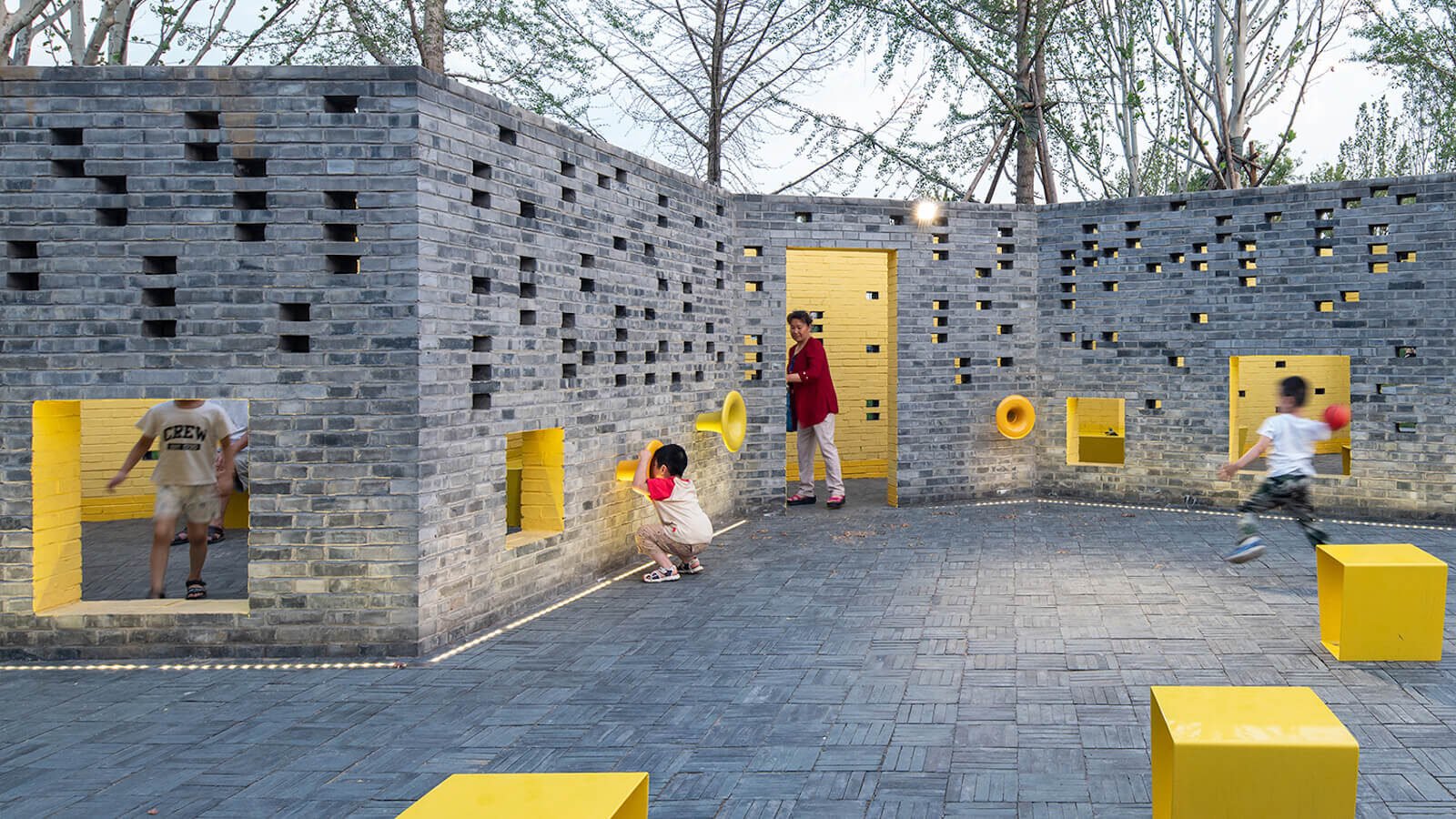 In Beijing’s eastern suburbs, the renowned SongZhuang Art District was established as a refuge for Chinese artists, who were looking for a peaceful and convivial atmosphere in which to create — beyond the pressures of the bustling city. Recently, however, the area has been the target of multiple developments in an effort to densify Beijing’s outer boroughs. To suit an evolving neighbourhood and adapt Songzhuang’s public spaces for versatility and inclusivity, Crossboundaries was asked to reimagine a parking lot near the Xiaopu Cultural Plaza, transforming it into a vibrant, 5,900-square-metre community park that would attract locals and tourists alike. 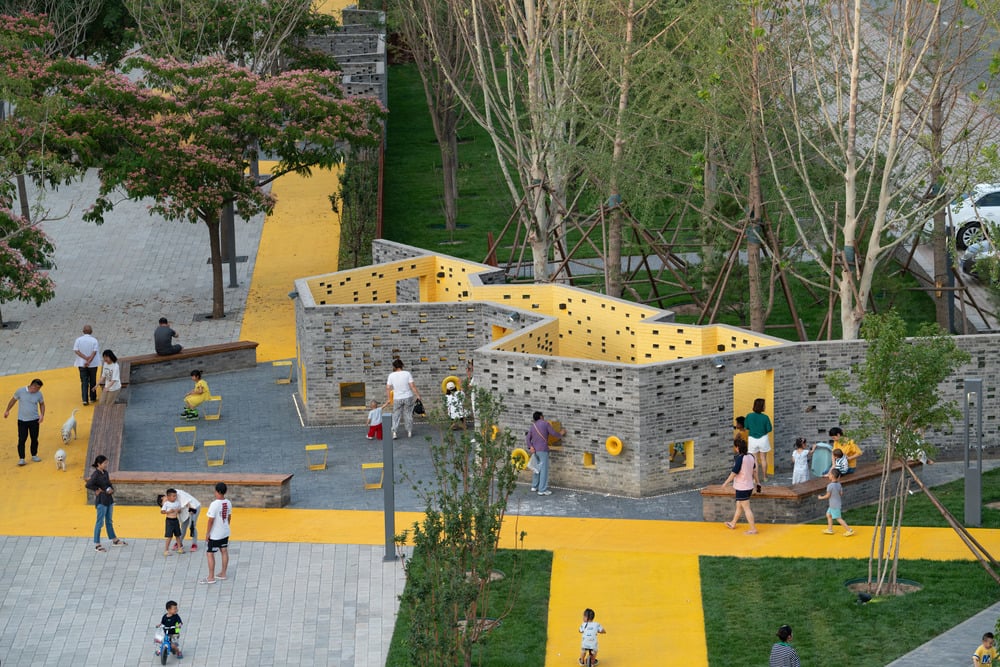 A concept of “urban rooms” was created to suit the surrounding environment while enhancing its capacities as a community hub. The L-shaped plot features a series of outdoor “rooms” divided by brick walls. The deep grey of the fortification-like walls is offset by yellow accents — the bright hue is employed throughout the space, from the painted cut-outs to the small benches dotting each space. Along the perforated brick wall, a layer of Corten steel lines low benches, adding a subtle industrial feel. 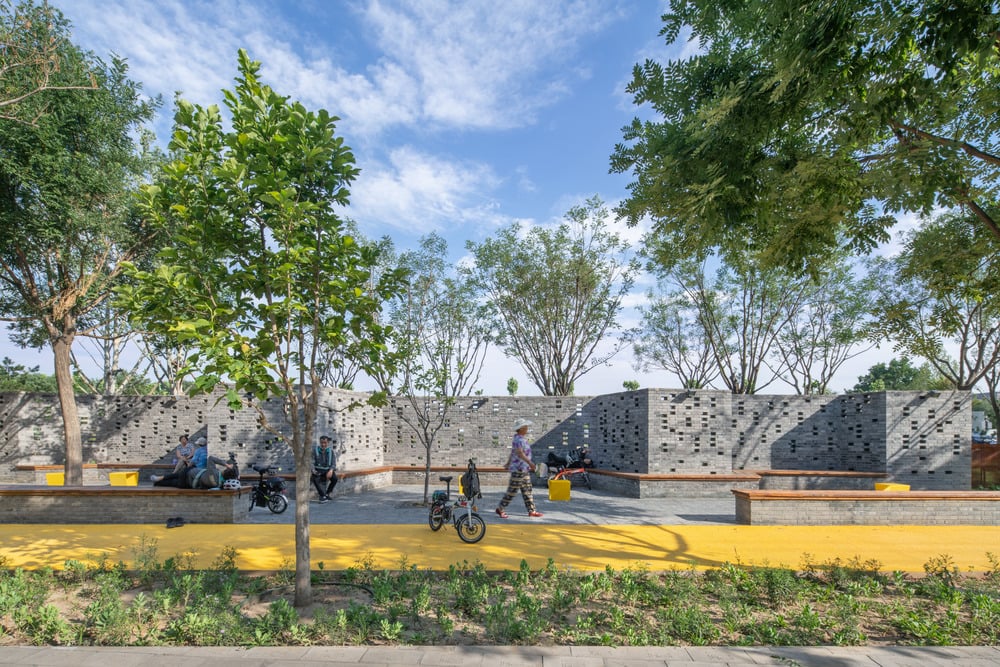 To avoid decimating the park’s existing vegetation — made up in large part of Gingko trees, a species native to the area — the fortifications were carefully built around them. Within the walls, a green zone filled with Southern Chinese pine trees and abundant bushes camouflages a parking area, which can still be accessed through “hidden” pathways. The striking continuous yellow line across the pavement serves as an effective way-finding mechanism throughout the four rooms, which are arranged in an asymmetrical loop around the parking lot space. 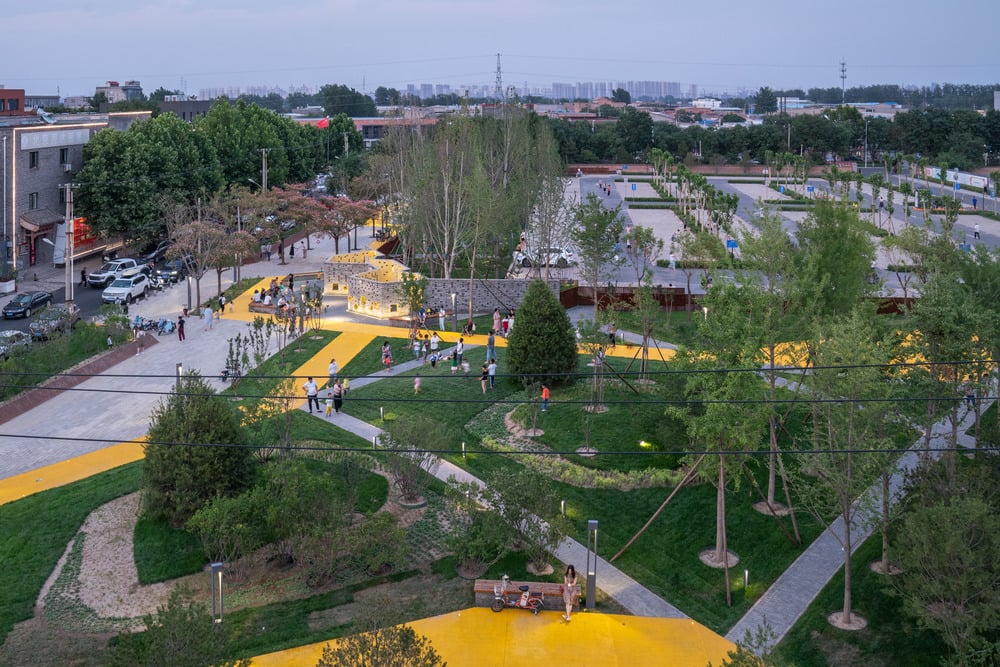 Accessible from the street, the first enclosure is dubbed the “welcoming room,” where a wide mirror meets visitors as they first enter — encouraging “selfies” and playful interaction in the reflective surface. In the “play” room, dedicated to children and their caretakers, layered brick walls with peek-a-boo openings and nooks perfect for hide-and-seek accompany speaking tubes through which kids can communicate from one end of the room to the other. These ludic yet aesthetically sensitive interventions can be found throughout the park — making it appealing to adults and children alike. 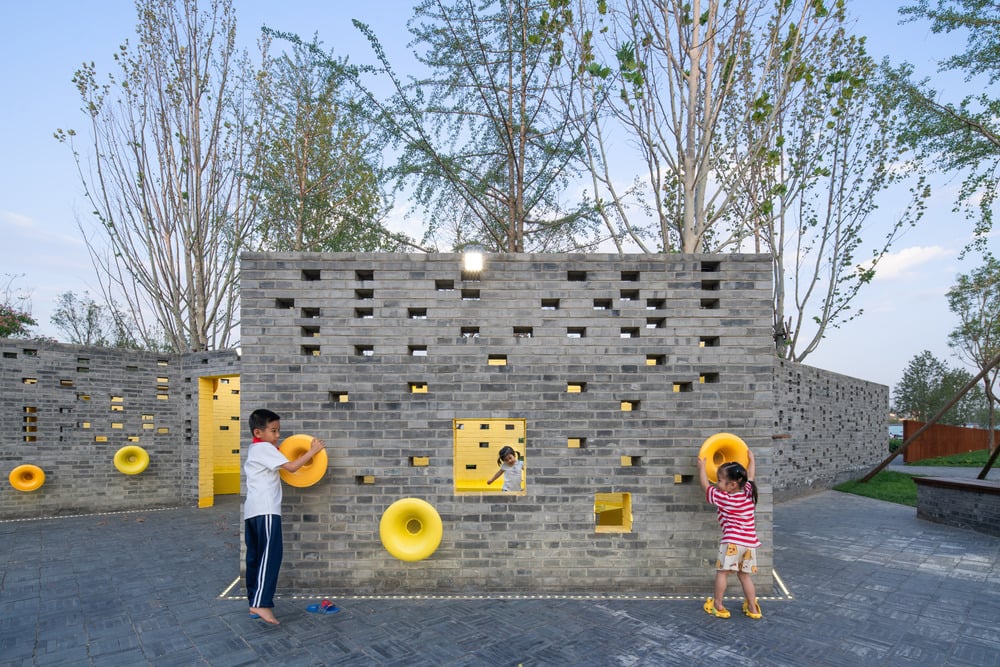 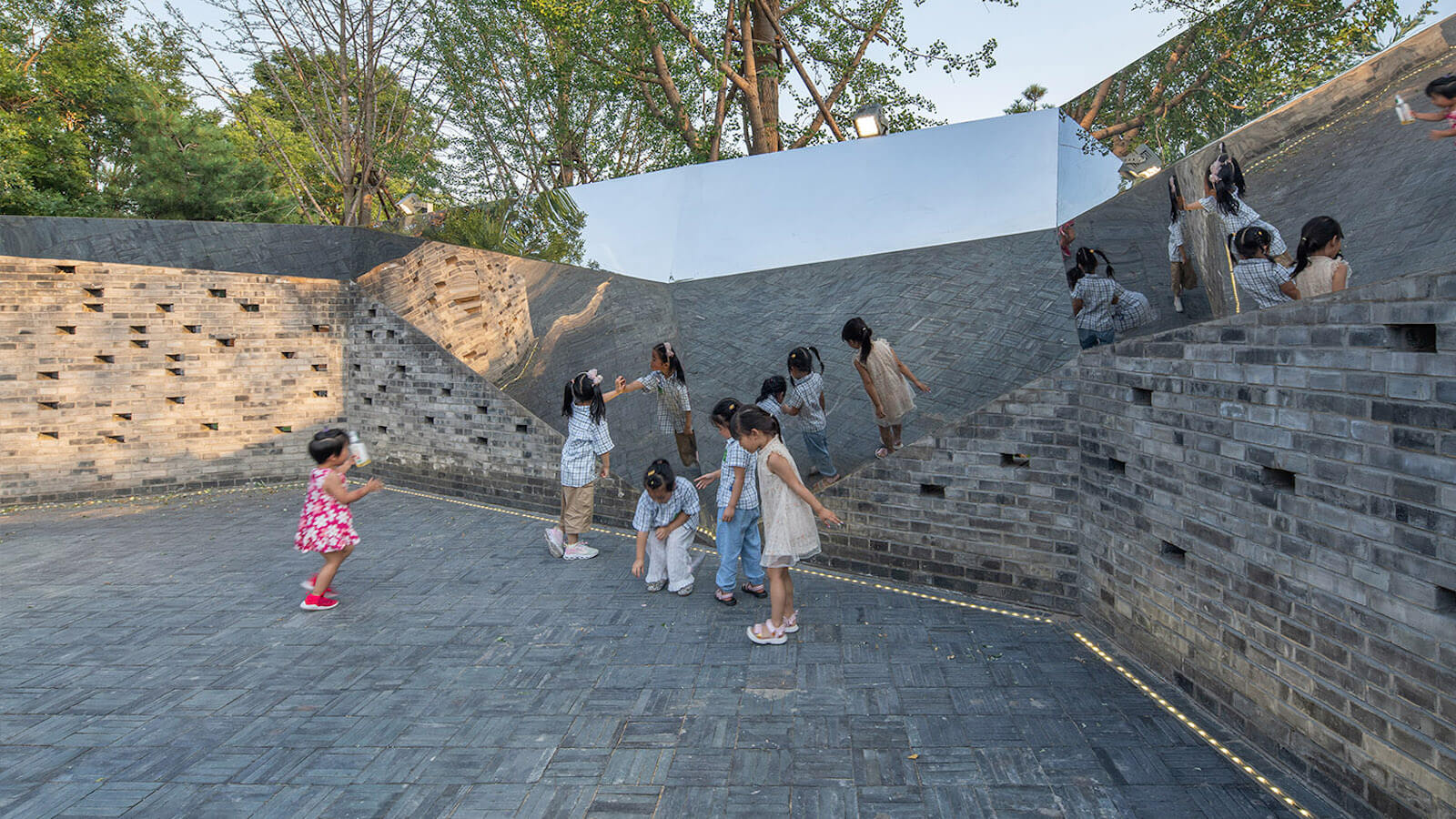 Further down the yellow strip, an open-air gym — where exercise equipment is integrated into the structure — attracts gatherings of gym-goers in one of the outdoor rooms. Finally, a “social” space — tailor-made for quieter interactions and the occasional game of chess — is equipped with long bench seating for resting and chatting. 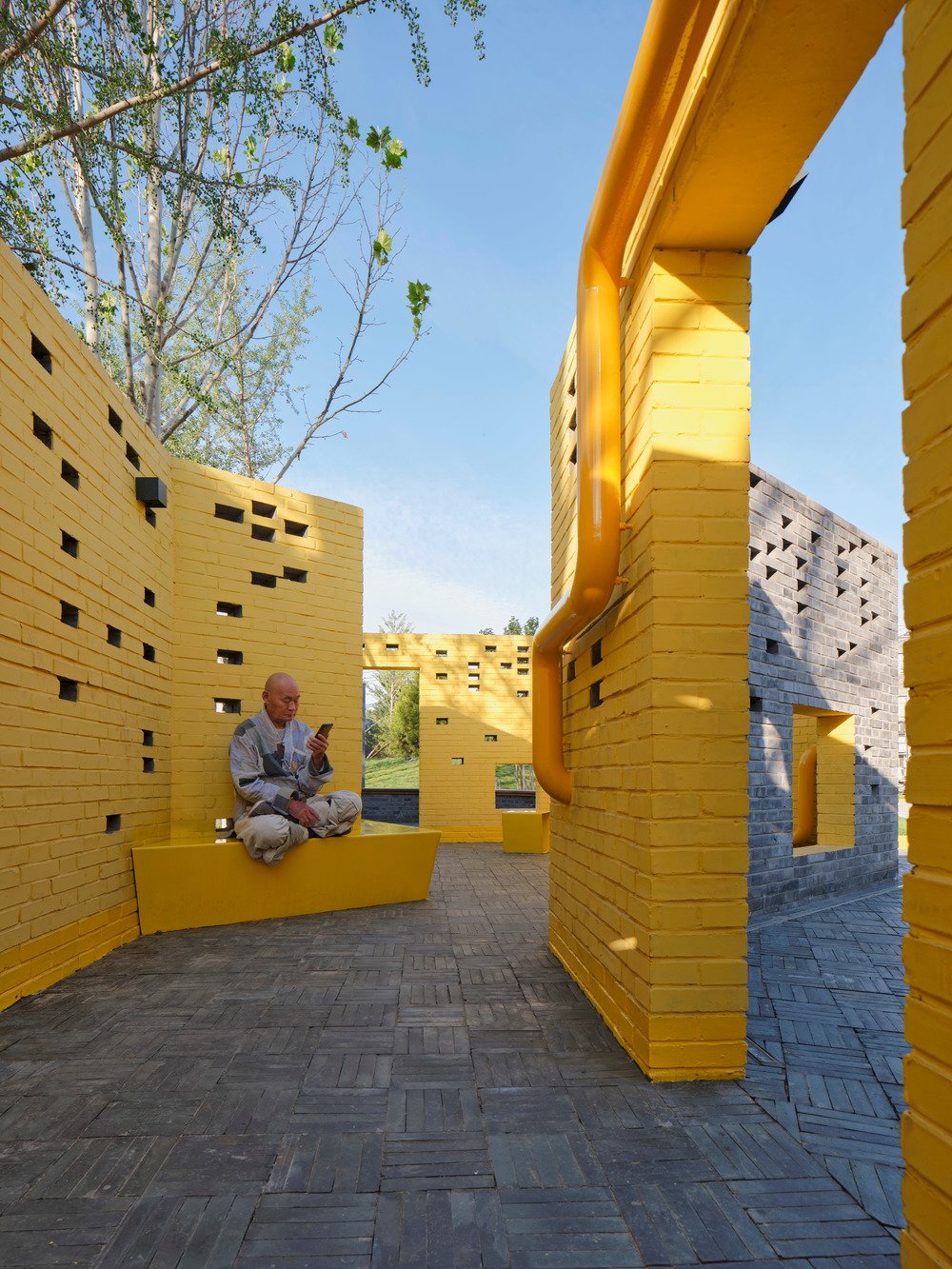 In a world still battling the COVID-19 pandemic, outdoor spaces for community gatherings are more important than ever. Since its completion in June, the Songzhuang Micro-Community Park has seen a consistent influx of visitors — with Tai Chi classes taking place in the mornings and locals walking their dogs along the winding path, the park has quickly become a part of the community fabric. 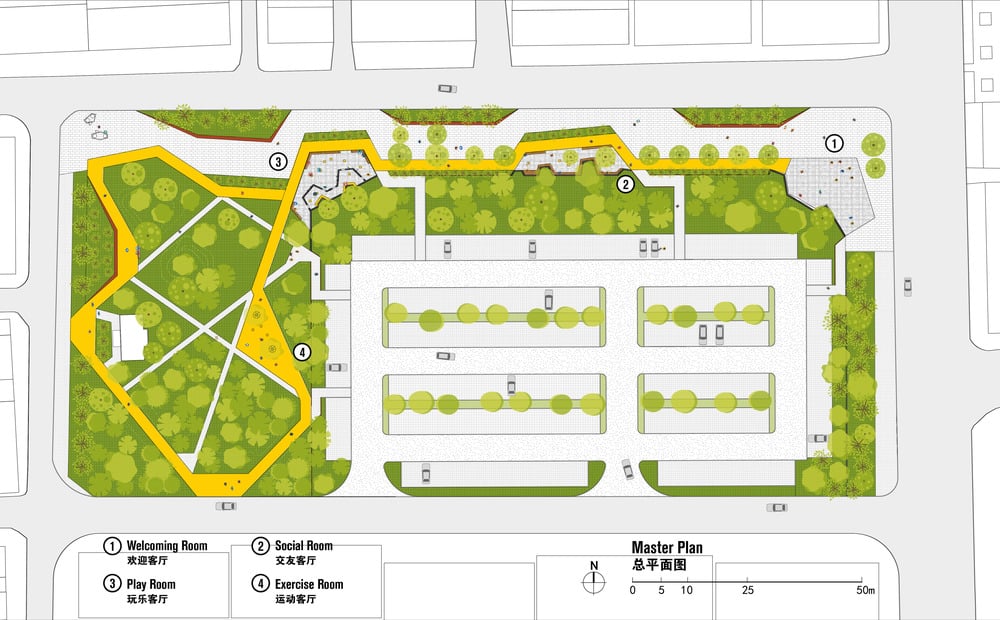