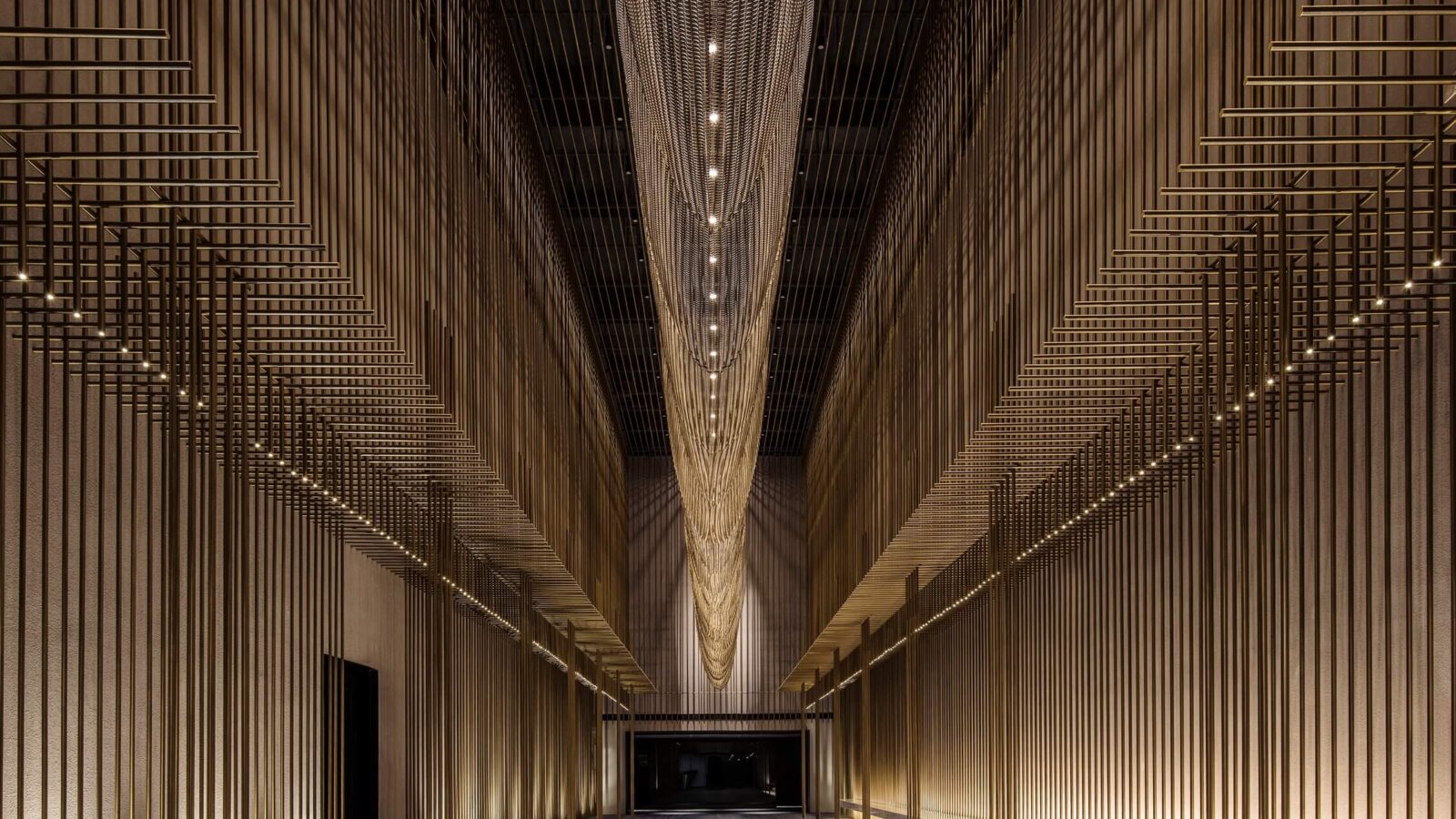 In the emerging megacity of Xi’an, the Qujiang Creative Cultural Centre elevates its subterranean setting.

Above ground, the Qujiang Creative Cultural Centre announces its presence with light. A mirrored entry pavilion with circular skylights leads visitors to the entrance, where they descend a series of escalators deep underground. It’s a bold and assertive gesture for the subterranean complex, and one that sets the tone for a whimsical but intelligently designed space that makes a virtue of its constrained urban setting.

In fact, the cultural centre introduces a major civic hub to the heart of the emerging Chinese megacity of Xi’an. Designed by Oval Partnership, the project incorporates a 400-seat multi-functional theatre, a performance and rehearsal room, a multi-purpose gallery, exhibition spaces, workshops, and a café and bar, into a surprisingly graceful complex.

At street level, the centre’s engaging shared space gives it a prominent public face. While the compact site’s 2,000-square-metre footprint necessitated moving the performance space below ground, the canopy – with its circular cutouts that let in natural light – creates a playful outdoor living room.

It also allows the space to read as an extension of the surrounding public square. Designed to host small performances and community events, the mirrored canopy brings up a taste of the theatre from below.

Underground, three levels of escalators convey visitors into the heart of the cultural centre.

Here, a bronze-framed corridor forms the spine of the complex: Transforming the interstitial space into a tantalizing, immersive experience, an arrangement of intricately crafted bronze metal flutes are suspended from the ceiling, cantilevered from the walls, and rooted into the floor. The grid is composed of 8,000 individually crafted pieces, honed and detailed by local craftspeople. To create a compelling counterpoint to their rigid verticality, the designers hung a smooth, draping metallic veil that spans the ceiling’s length. Together, the bronze elements combine to create a feeling that the designers describe as “weightless suspension.”

Befitting the theatre, the space creates an immersive, sensory ambiance that takes advantage of its enclosed, underground site, to foster an experience inspired by its setting. Somewhere between the stage and the everyday world, it embodies the magic of the proscenium. 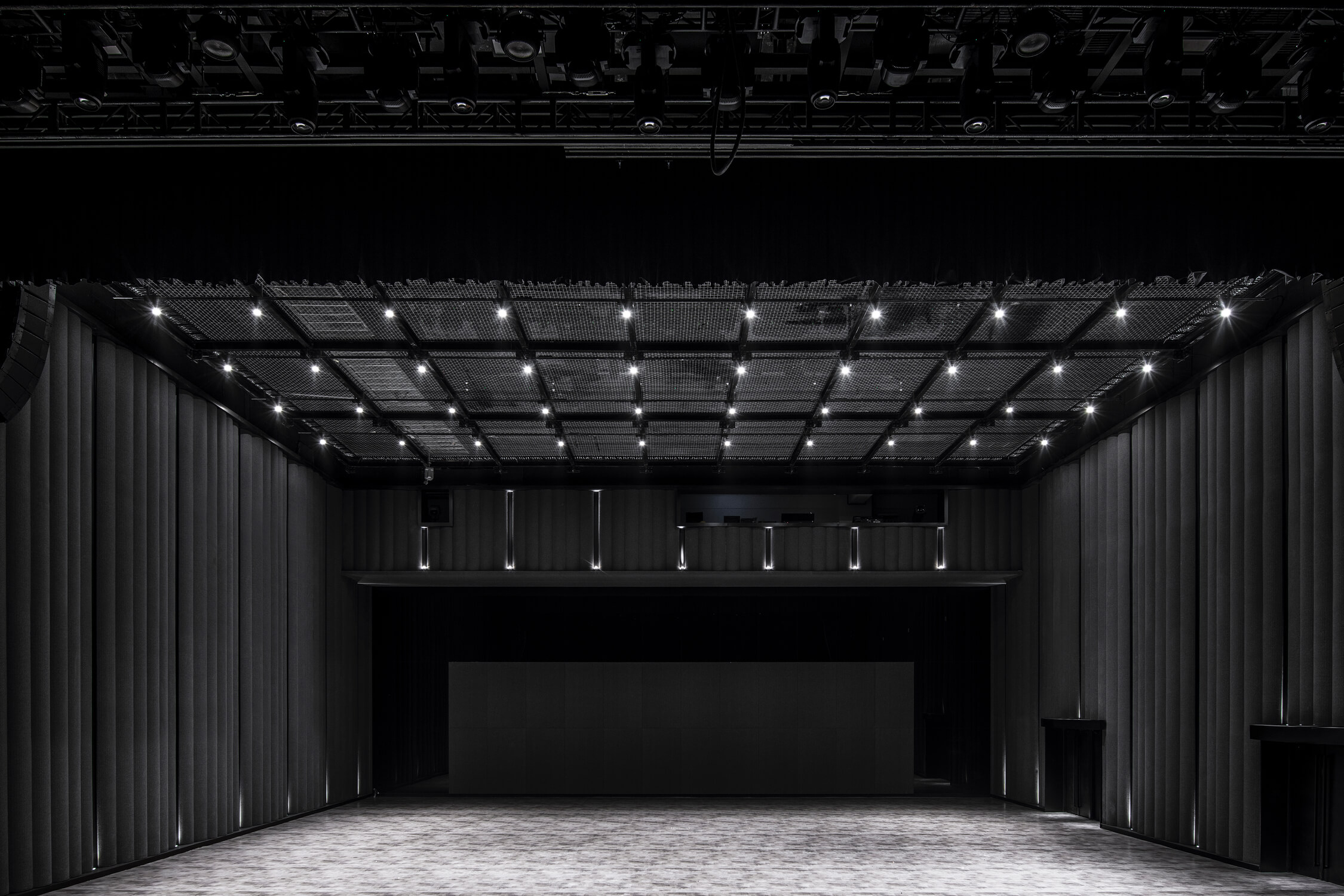 On either side of the corridor, the Qujiang theatre and rehearsal space leave the drama to the stage. Nonetheless, the minimalist rooms convey an architectural richness. While the main theatre stage is a pared-down black box, its subtle lighting program pleasantly accentuates the curves of the acoustic wall panels to frame the room. The retractable seating allows the space to be configured as a flat, unadorned auditorium. Meanwhile, the smaller rehearsal room – outfitted with brighter wall panels – is a more informal, relaxed space for performers. Deep underground, it is a quiet haven.

It’s difficult to make a cultural space space work below grade, but The Oval Partnership has just about pulled it off. The grace of the Qujiang Creative Cultural Centre is that it doesn’t attempt to overcome or mediate its seemingly unattractive context. Instead, it creates an experience that accentuates a feeling of subterranean mystery.

In the emerging megacity of Xi’an, the Qujiang Creative Cultural Centre elevates its subterranean setting.