Paper Craft
New York’s Jeremy Barbour and his Tacklebox studio devise surprising interiors with nothing more than thousands of lunch bags and newspapers. 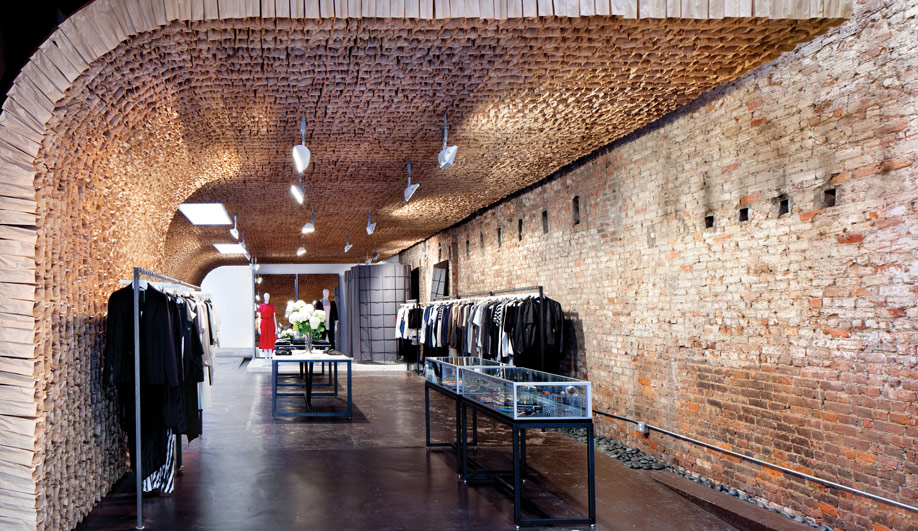 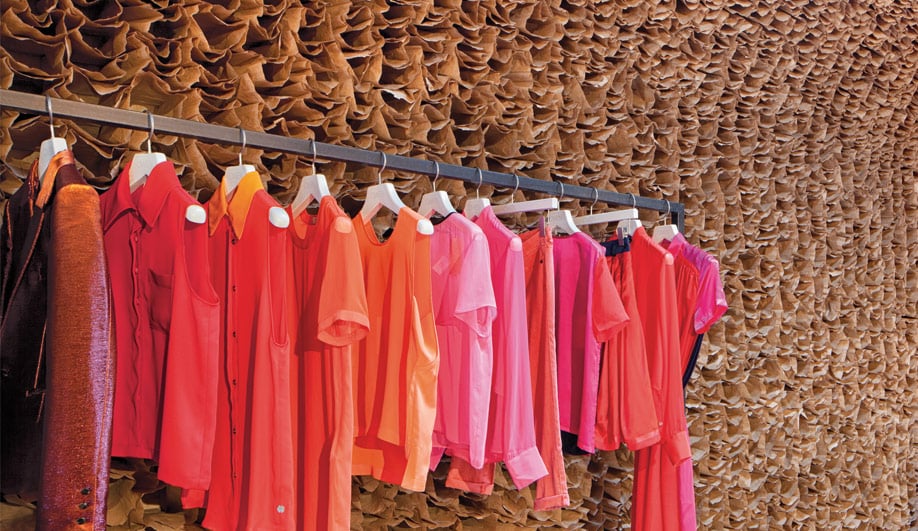 To create a signature backdrop for the vibrant fashions at Owen, a shop in New York’s Meatpacking District, Tacklebox stapled 25,000 brown paper bags to a wall and the ceiling 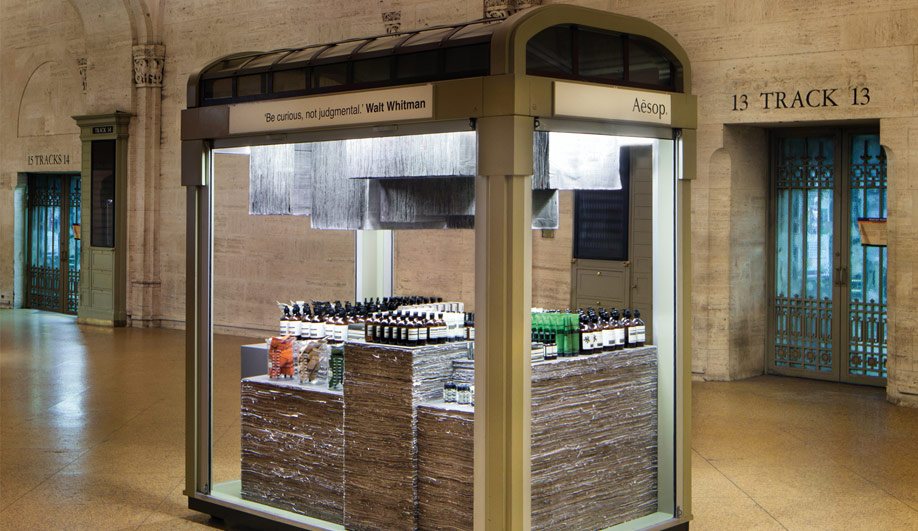 In Grand Central Station, the studio created a kiosk for the Australian skin care company Aesop. Inside, stacks of The New York Times, in various heights, rise from the floor and hang from the ceiling 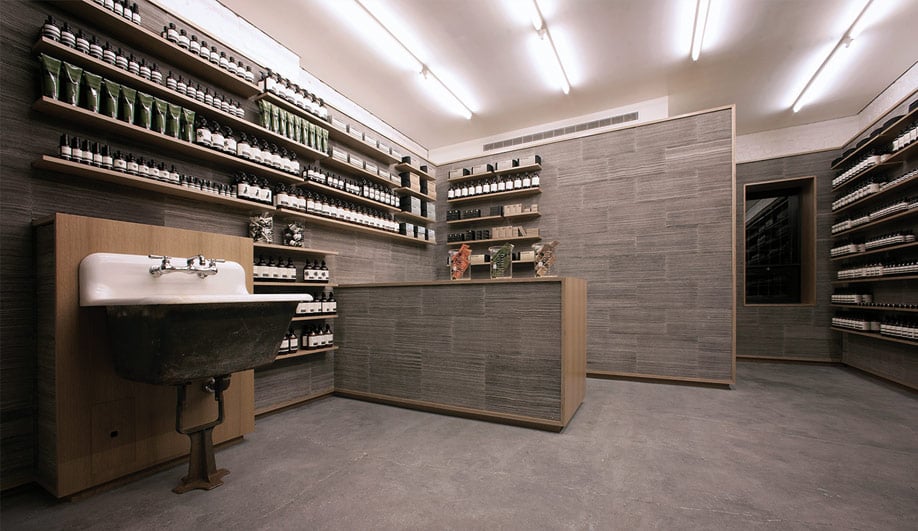 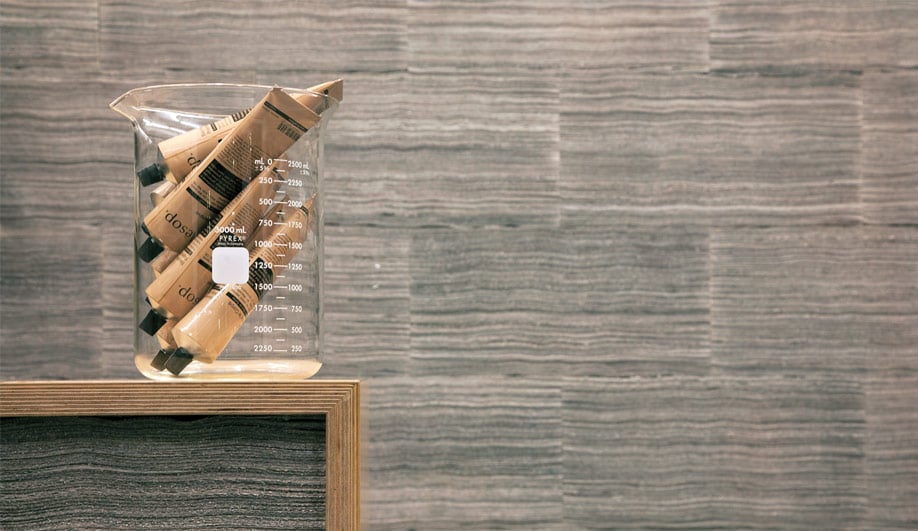 Inside Owen, a new clothing boutique in New York’s Meatpacking District, a lush brown canopy softens the edges of an otherwise industrial, brick-walled space. Upon closer inspection, the earthy texture reveals itself to be made of 25,000 brown paper bags, arranged in tight rows over a curved wooden frame that rises up one wall and extends across the ceiling. In creating the 167-square-metre shop, architect Jeremy Barbour of Brooklyn studio Tacklebox was inspired by its owner, Phillip Salem. “He personally selected lines of clothing by designers [such as Vena Cava, Robert Geller and Timo Weiland] who have taken a classic look and introduced unique details to create remarkable, original pieces,” Barbour explains. “In response to this identity, I wanted to take something inherently familiar – the paper lunch bag many kids grew up with – and use it in a new way: to define an environment that was at the same time strangely foreign yet familiar.” If one of the bags (which are stapled in place), gets damaged, it can be replaced with minimal fuss and expense. Although paper might seem like a dubious choice, Barbour met fire regulations by working with a consultant to find a non-toxic flame retardant.

This is not the first time Barbour has elevated an everyday paper product into an art installation. After emerging onto New York’s architecture scene in 2007 with the design of the 3.1 Phillip Lim flagship boutique in SoHo, using wall treatments made from stacked strips of tongue-and-groove oak flooring, he was recruited by the Australian skin care company Aesop to design its first three New York stores. Made of 1,800 chopped, stacked copies of The New York Times, the Aesop kiosk in Grand Central Station drew instant praise from design blogs. The second shop recycled 2,800 copies of the Times into a felt-like wallcovering, and the third is clad in industrial-grade grey felt.

Despite these creative interventions, Barbour has no intention of being pigeonholed as the go-to architect for humble finishes. “It’s never about working with a material just for the sake of it,” he says. In the case of Owen, a limited budget and a tight construction schedule helped drive the material choice. “If properly calibrated, such constraints can be a powerful catalyst in the design process,” he says. “Some of our projects have been built for less than $5,000, yet they have the same level of ingenuity, craft and precision as projects that cost over a million dollars.”