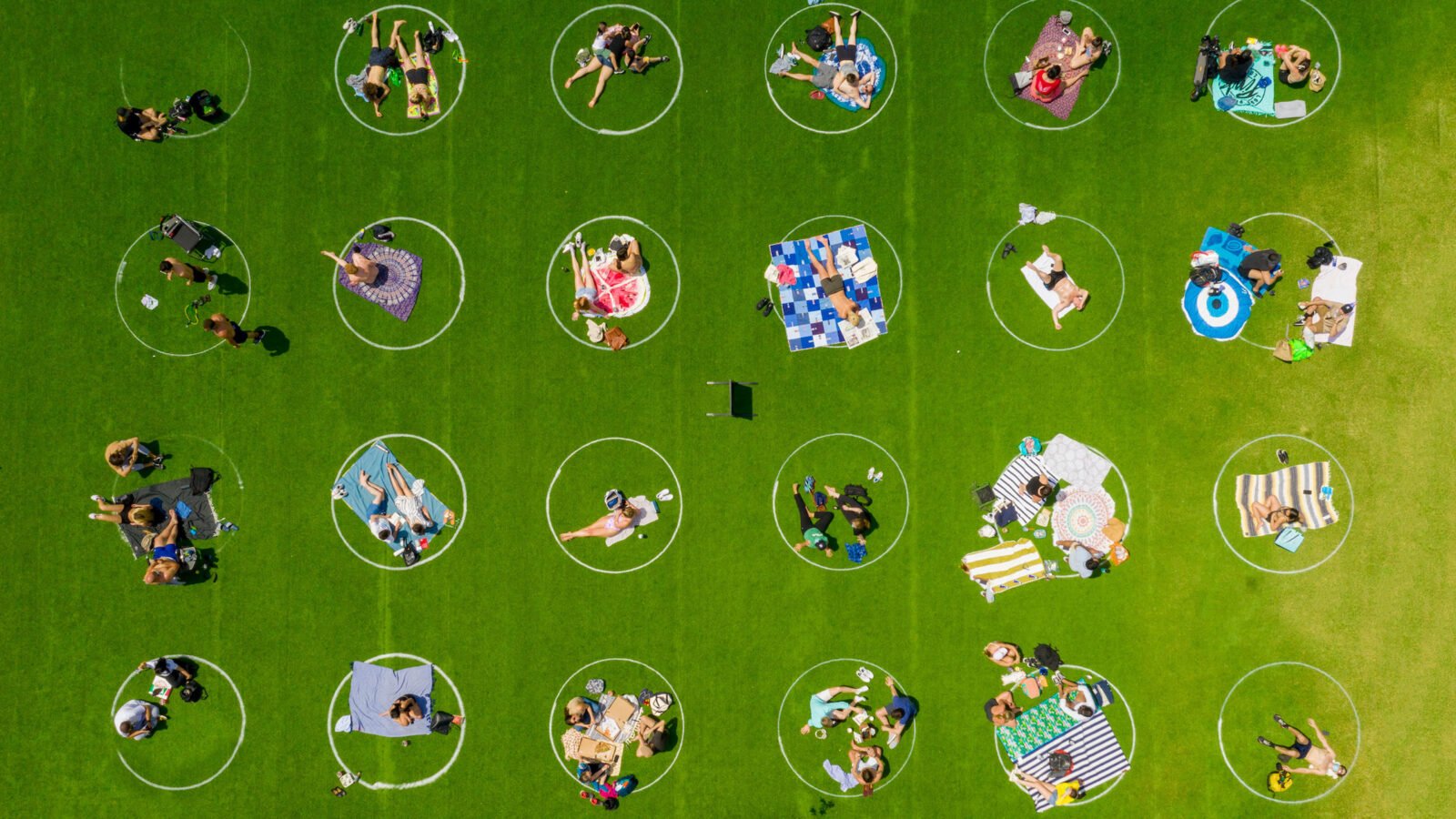 Cities need parks. Long before the pandemic, the vitality of greenery and public space was readily apparent across many of North America’s most densely populated communities. And in cities where lawns and backyards are a rare luxury, parks offer a much-needed respite – with urban green space proven to be crucial to public health and well-being. Then came COVID-19, and the script was reversed, with every communal space becoming a potential vector of transmission.

From the beginning, it made for a messy spectacle. As images of seemingly packed Florida beaches made headlines in March, a debate began to simmer about the harms of public life. Were the beachgoers tanned indictments of American hyper-individualism – not to mention the “Florida Man” stereotype – or simply people yearning for fresh air and a connection to nature? For that matter, was the “crowding” even really happening, or did the zoom of telephoto lenses create visual illusions that belied responsible physical distancing?

By early May, belated spring weather finally arrived in the northeast. In cities like New York, Montreal, Boston and Toronto, a stubbornly long winter suddenly gave way to sweat and sunshine, and then to busy parks and beaches. While the desire for outdoor life proved unsurprisingly widespread – so much for the Florida man – the crowds invited similar questions. Were these gatherings selfish and reckless, or a more understandable consequence of cramped months spent in the basement apartments and condo towers that make up so much of the housing stock accessible to millennials? 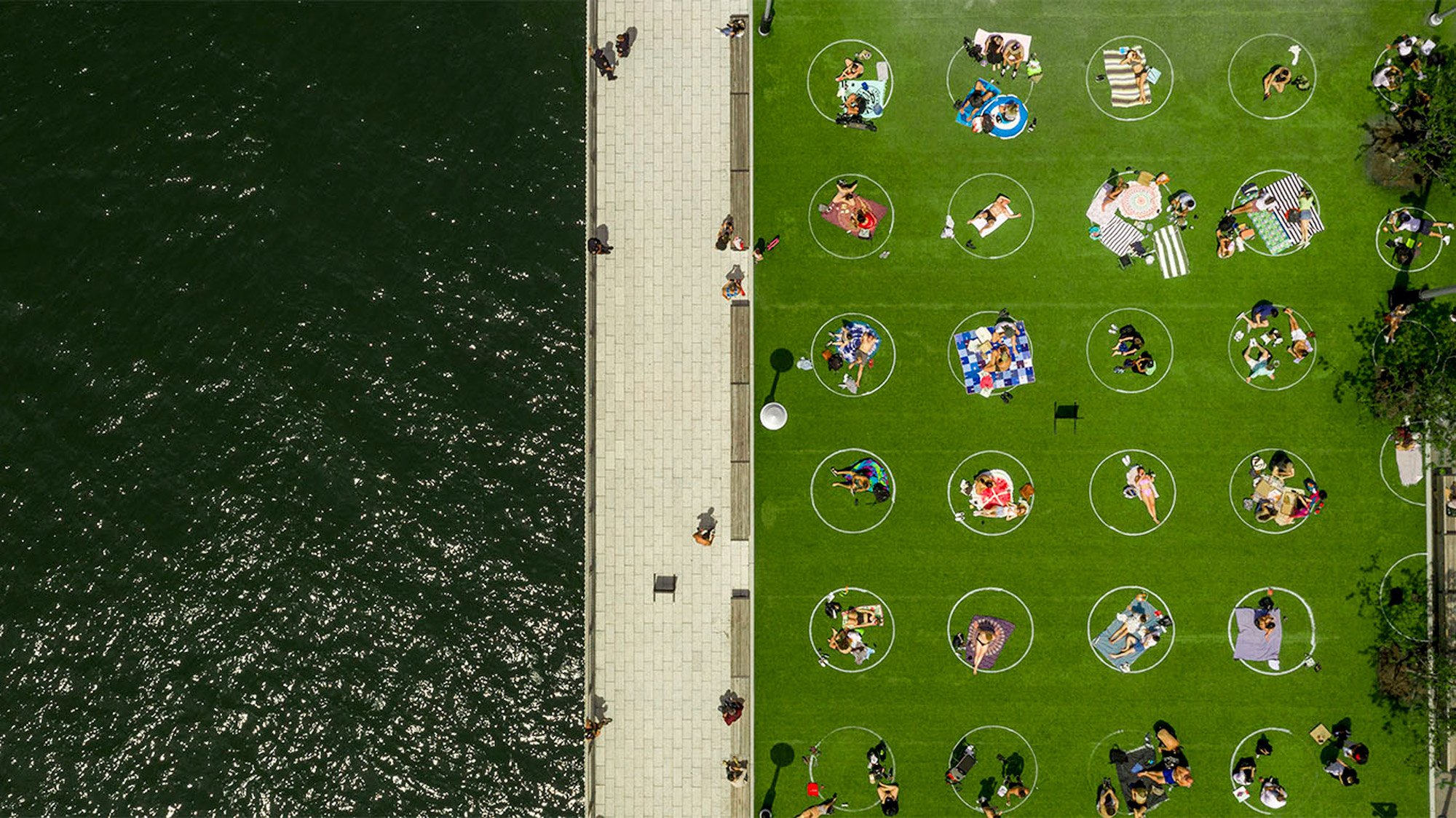 In Toronto, for example, recent viral photos of Trinity Bellwoods Park depicted a hub of life apparently undimmed by the pandemic. Similarly crowded scenes were recorded everywhere from opulent Malibu beaches to compact Brooklyn parks. In an effort to maintain safe public spaces, cities across North America are turning to painting social distancing circles on park grass. Starting with New York’s Domino Park, 300 of the simple white circles – each about eight feet in diameter – were painted across four San Francisco parks ahead of Memorial Day weekend. Following much-publicizing crowds in Trinity Bellwoods, the City of Toronto today installed similar circles in the popular Queen West park.

I’m down at Trinity Bellwoods this morning, where workers are beginning to paint circles on the grass indicating proper physical distance pic.twitter.com/ARL9yMSgmj

Elegant and Instagrammable, the temporary interventions facilitate more orderly physical distancing. It seems to be working in Williamsburg’s Domino Park, where photographs – taken from aerial vantage points that don’t risk creating the perception of crowding – depict groups of Brooklynites maintaining a safe distance from their neighbours. Moreover, with recent studies suggesting that the vast majority of COVID-19 transmissions occur indoors, park-goers in Williamsburg and Queen West seem relatively safe.

On the same day that Toronto announced the use of social distancing circles in Trinity Bellwoods Park, the city also released its first comprehensive set of COVID-19 data, with a map showing the distribution of cases by neighbourhood. Social distance circles or not, Queen West is no locus of transmission. Instead, it’s more outlying parts of the city that suffer the highest number of cases. 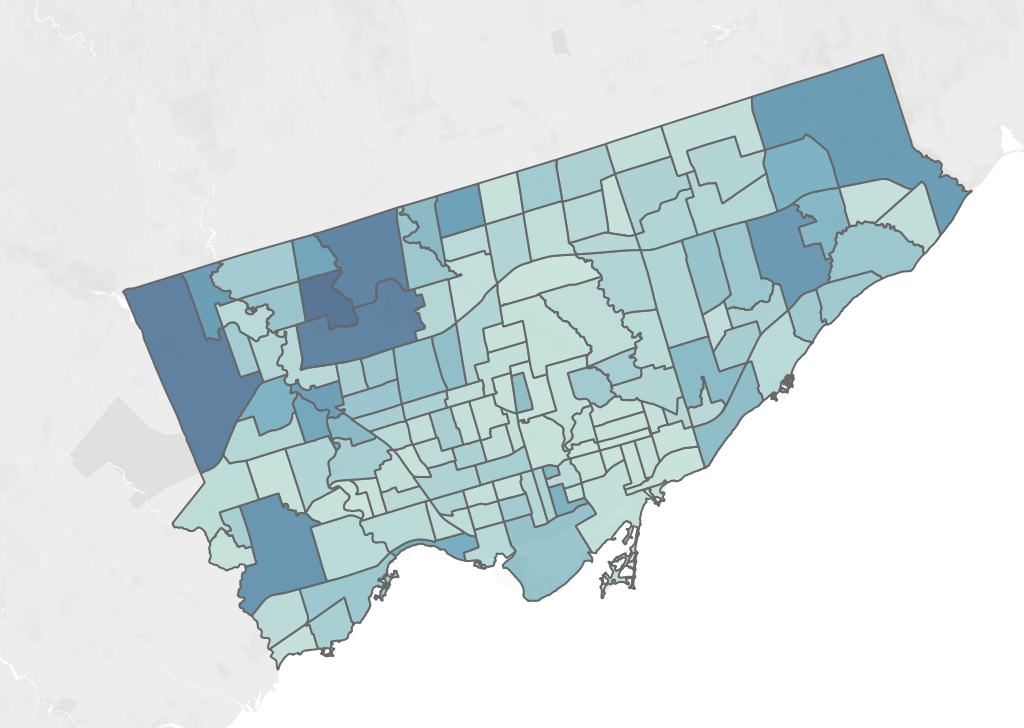 The cases don’t correlate with crowded parks so much as income, immigration status and race. Jobs play a crucial role too, with cases spiking in neighbourhoods with high proportions of workers employed in manufacturing and transportation – and high concentrations of lower-income essential workers with no choice but to take public transit. In other words, those who choose not to practice social distancing are at much less risk than those who simply can’t. As for the suburbs beyond the city limits? Much of the data doesn’t yet exist, with Ontario’s provincial government lagging far behind its U.S. counterparts in tracking race-based and socio-economic COVID-19 statistics.

New York follows a somewhat similar pattern. The prevalence of COVID-19 cases near Williamsburg’s bustling Domino Park – and, for that matter, all of Brooklyn and Manhattan – so far pales in comparison to the outbreak clusters of Staten Island, Queens and New Rochelle. San Francisco’s outbreak is less severe altogether, but as one of the least affordable places on the planet, the city “had purged most of the people who were most at risk from dying from COVID-19 to its surrounding counties long before the pandemic arrived,” wrote Curbed’s Alissa Walker.

Across U.S. cities, Black and Latino residents have been dying at higher rates than the general population – all while shouldering a disproportionate share of America’s essential jobs and living in cramped apartments in neighbourhoods with little green space and heavy police presence. Ultimately, “cities cannot be fixed if we do not insist on dismantling the racial, economic, and environmental inequities that have made the pandemic deadlier for low-income and nonwhite residents,” Walker wrote.

Against this reality, the photos of easygoing urban park–enthusiasts and social distancing circles seem of another world. The widespread calls for increased urban park space, expanded sidewalks and bike lanes and improved residential amenities are well-founded – after all, we should all be able to feel at ease in our surroundings – but this urbanist wish list risks obscuring more fundamental socio-spatial disparities.

While a carefree atmosphere permeated Toronto’s Trinity Bellwoods Park last Saturday, most of the city wasn’t so lucky. In a neighbourhood that’s whiter and wealthier than most of the city, the Queen West crowd enjoyed an unencumbered hangout. But over the same weekend, Eid celebrations were not allowed to be anywhere near as laid back, as “Muslims Canadians shared stories on Twitter of a visible police presence in their communities to ensure they didn’t break social-distancing rules,” wrote Shree Paradkar in the Toronto Star. She also noted that police have also issued $880 tickets to everyone from homeless people sitting on public benches to cricket players in Brampton.

As Paradkar put it, the disparities offer “a quick snapshot as to who feels entitled to the public space in this city, who gets scrutinized and who gets penalized for existing in it.” In other words, had the Trinity Bellwoods crowd been “a sea of Black and brown folks, we’d be having a very different conversation today.”

Two days after the scene at Trinity Bellwoods made the rounds on social media, New York’s Central Park was the site of a much more blatant type of exclusion: A white woman walking her unleashed dog threatened to call the police on a Black bird-watcher, simply because he pointed out that dogs in the area were required to be on a leash. Reading about the encounter, Paradkar’s words cycled through my mind. Who feels entitled to public space? Who gets penalized for existing in it?

That same day, the brutal killing of George Floyd – an innocent 46-year-old Black man – at the hands of a Minneapolis police officer provided yet another among countless examples of racialized policing. Meanwhile, media coverage of the ongoing protests in the wake of Floyd’s death has zeroed in on instances of violence and looting, all while the senseless – and overwhelmingly white – crowds protesting lockdowns across North America are treated with the privilege of conscientious objectors. Police forces are cracking down on Black protestors in Minneapolis with tear gas, after having stood motionless in the face of white supremacists brandishing assault rifles.

North of the border, spatial inequality often also manifests itself in a quieter, characteristically Canadian guise. Indeed, even the Trinity Bellwoods gathering hardly seemed an instance of rule-breaking. Even Toronto Mayor John Tory was spotted among the crowd, making amicable small-talk with groups of young men and women. And while Tory later apologized for foregoing social distancing, I’d hardly ever seen him looking so at ease as he was that day at the park.

Appears the Mayor was at Trinity Bellwoods yesterday, I don’t see 6ft between him and these Beckys. pic.twitter.com/tdwhUucQ7J

The blasé flouting of necessary regulations evinced a subtle sense of privilege that has long defined Trinity Bellwoods Park and reminded me of my first time there. I was 16 or 17 when a group of friends first invited me to come downtown and hang out on the grass, and I was excited to finally experience the legendary hipster mecca for myself. I was surprised by what I saw. For a sheltered immigrant kid from the city’s more buttoned-up inner suburbs, it all set off red flags. Drinking? Weed? In a public place? It was all illegal – auguring the sort of trouble I probably couldn’t afford to be in, even without a beer in my hand. But I was quickly re-assured. My companions came from wealthier, established families, and one friend’s father was even a prominent criminal lawyer. The cops, he told me, would get what was coming to them if they tried anything – not that they ever would. Maybe it was all teenage bravado, but it left a powerful impression. Who feels entitled to public space? Who gets penalized for existing in it? Long before today’s chic white enclosures, I felt the invisible protection of another kind of circle close around us.