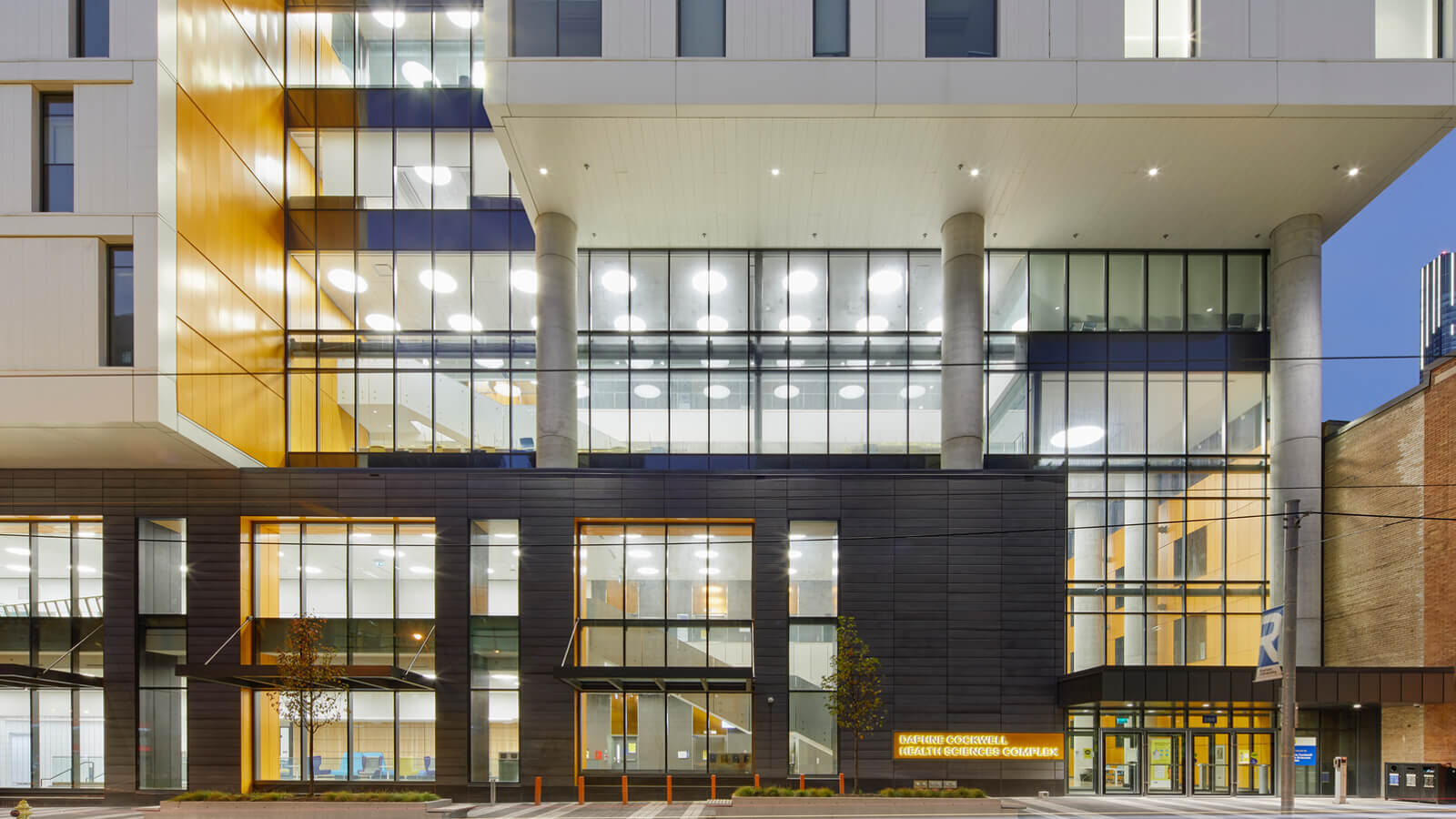 City Building: How a Vertical Campus Came to Toronto

Ryerson University is unlike any other educational institution in Canada. Its campus doesn’t have precise geographical boundaries but is intricately interwoven with the fabric of Toronto, Canada’s largest city. That means that, when it grows, it has to get crafty, inventing new land-use strategies, partnerships and even building typologies.

In the summer of 2013, my colleagues at Perkins&Will and I embarked on what would be a seven-year journey of design and discovery with Ryerson to create a vertical campus now known as the Daphne Cockwell Health Sciences Complex (DCHSC), located on the site of a former parking lot just north of where Church and Dundas intersect. From the outset, we were challenged and inspired by a set of complex objectives drawn from two key sources. The first was the 2008 master plan that Ryerson had commissioned to address a space crunch in the face of growing enrolment and finite land assets. The second was the vision that then-President Sheldon Levy had for the university. “Ryerson the City Builder” had become Levy’s battle cry as he and his teams investigated a series of resourceful and innovative approaches to leverage every square inch from its downtown context. 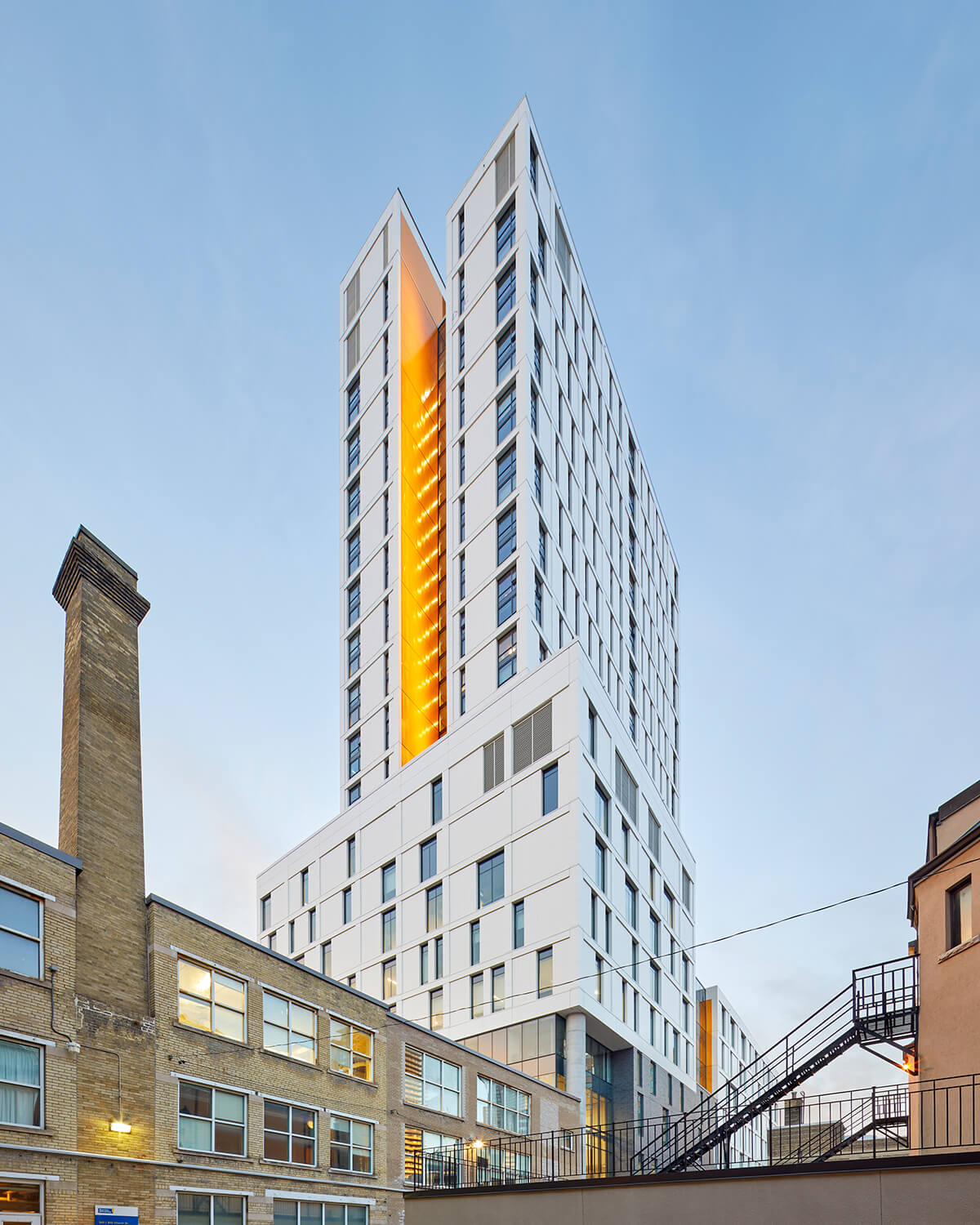 In the lead up to the DCHSC, Ryerson had recently redeveloped the iconic Maple Leaf Gardens in partnership with the Loblaws grocery empire. Always resourceful, the university had also negotiated with multiplex giant AMC to use their 24-tiered movie theatres as classrooms between 8 am and 4 pm on weekdays. This captures the degree to which Ryerson was “of the city,” thoroughly enmeshed within Toronto’s bustling core. DCHSC marked the first coming together of the institution’s novel co-development strategy and the master plan’s recommendations for a new vertical campus building typology. Designed to consolidate a dispersed faculty of Health Sciences, the new structure would allow the individual departments of Nursing, Midwifery, Nutrition and Public and Occupational Health to vacate a set of older spaces on campus, freeing them up for renewal or redevelopment later on. 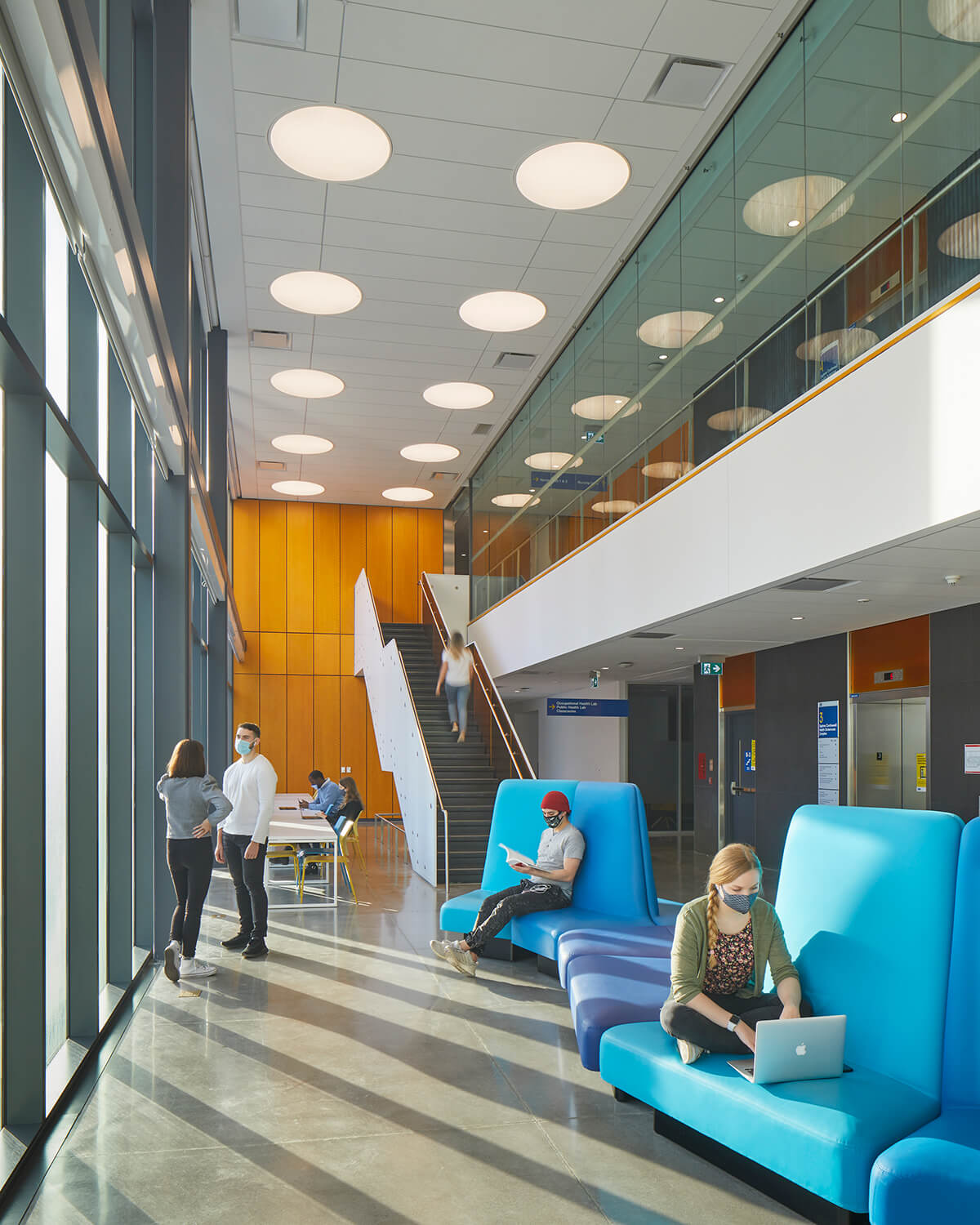 At the same time, the building had to address a chronic shortage of on-campus housing for students. A research grant from the federal government proved to be the catalyst for their most ambitious co-development yet, establishing the big middle upon which a private housing developer could build a student residence and where a private parking provider could build a subterranean lot. Once the real estate vision was established, the university realized that they were about to build something very unique and incredibly visible. However, such a structure would need to communicate Ryerson’s core values as well as set a standard for the next generation of high-density learning environments.

Before design could begin in earnest, our team was charged with engaging all of the stakeholders to build a shared vision around how the project could function and the culture it would foster and support. At our first structured visioning session, we intentionally grouped members from the different departments — Nursing, Nutrition, Occupational and Public Health and Midwifery — along with students into working teams. We then tasked them with brainstorming what the building’s character, identity and legacy might be. The playful nature of the exercises effectively broke down some of the barriers between the four schools and proved influential in determining the architecture’s final character. For instance, one group christened the new building “the Cauldron,” suggesting the potential for an alchemical reaction. 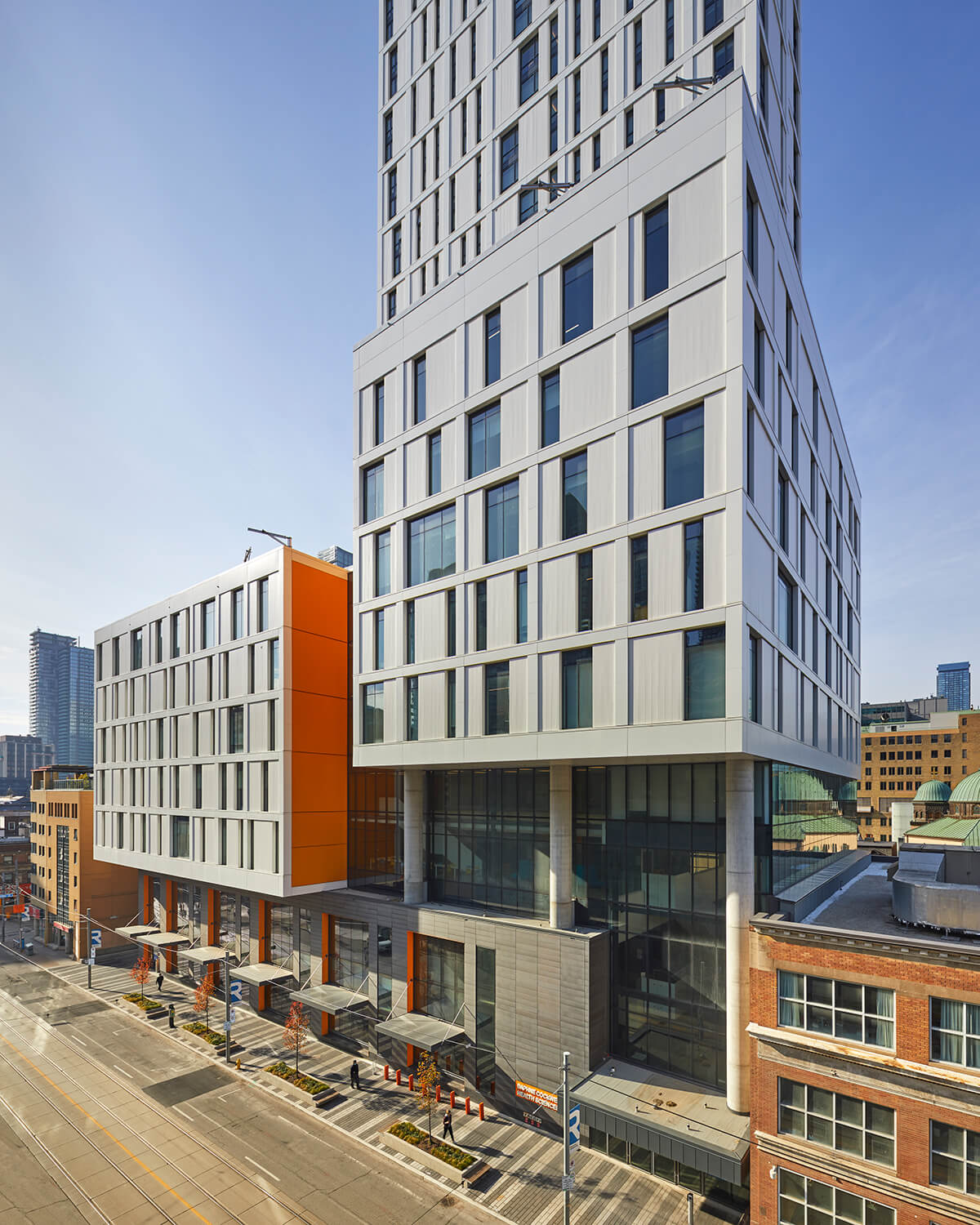 When asked to vote on images that should inspire the character of the building’s public areas, all 65 participants gravitated to one of coloured umbrellas hanging over a sun-dappled laneway. While focusing on the outcome of these engagements would take time, our initial foray had been successful in revealing that perhaps the four schools could come together around a design that promised transformation and a sense of playful delight.

Over the next six months, we engaged with hundreds of students, faculty researchers and community members, capturing a multitude of voices and involving every level of faculty and campus leadership along the way. Ryerson’s CFO Julia Hanisberg impressed upon us the need for clarity and brevity requesting that our statement be able to fit on a coaster. In the end, we settled for six words: “Creating Connections for a Healthy City.” 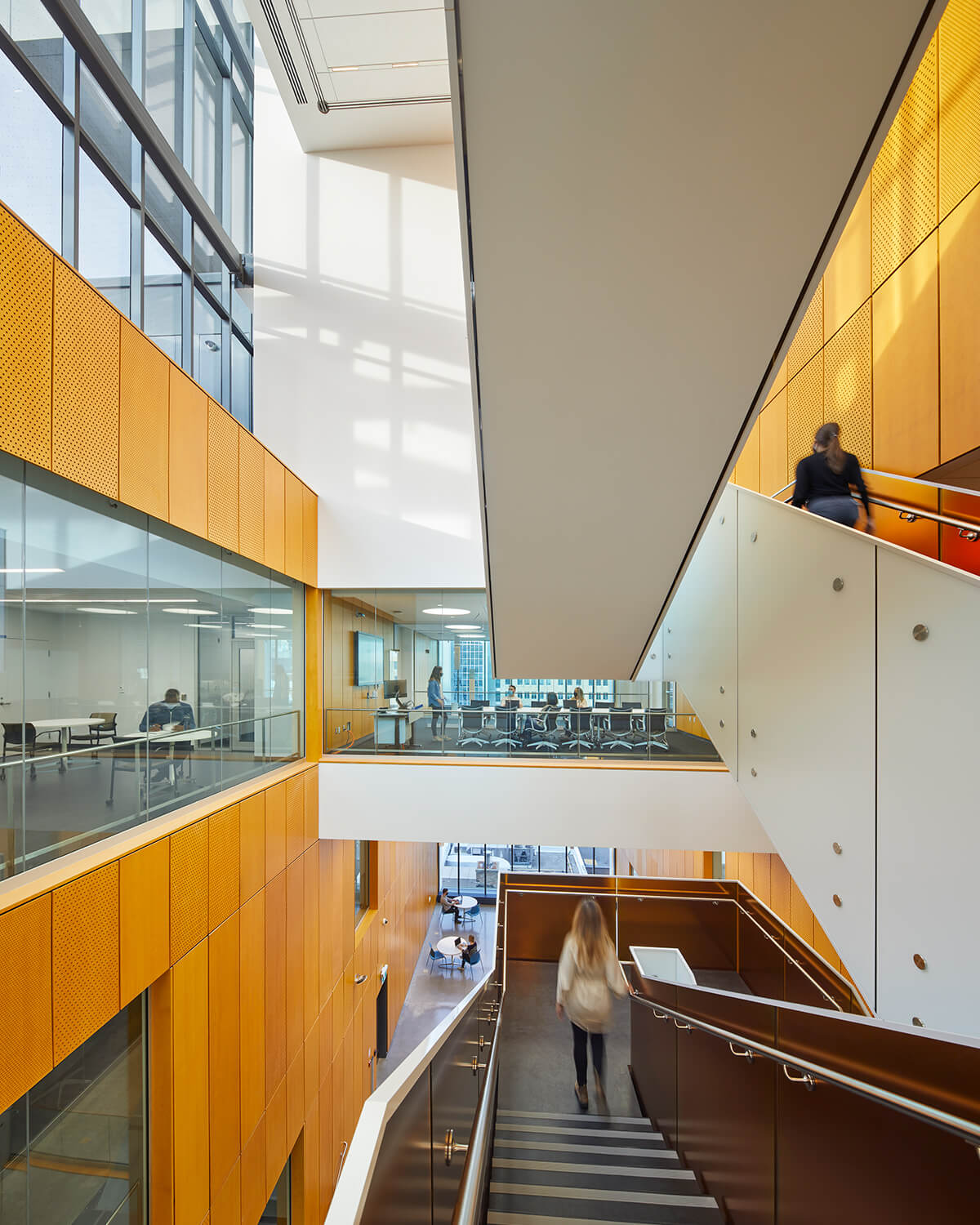 From this commitment stemmed a series of detailed guiding principles on the themes of inclusivity, sustainability and flexibility, each coalescing in a distinctly public-minded approach. Together, these would become our project charter — a valuable map for navigating the seven-year journey ahead of us.

Our team curated a series of workshops bringing together campus leaders, members of Ryerson’s City Building Institute and School of Architecture as well as visitors such as noted Toronto planners Ken Greenburg and George Dark. The goal of these workshops was to develop priorities for the public realm in and around the building, as well as a variety of built form alternatives. With foam models, bits of string, tape and icons for urban animators (such as food, beverage and green space), we mapped out ways in which this new development would connect to the campus and the city. 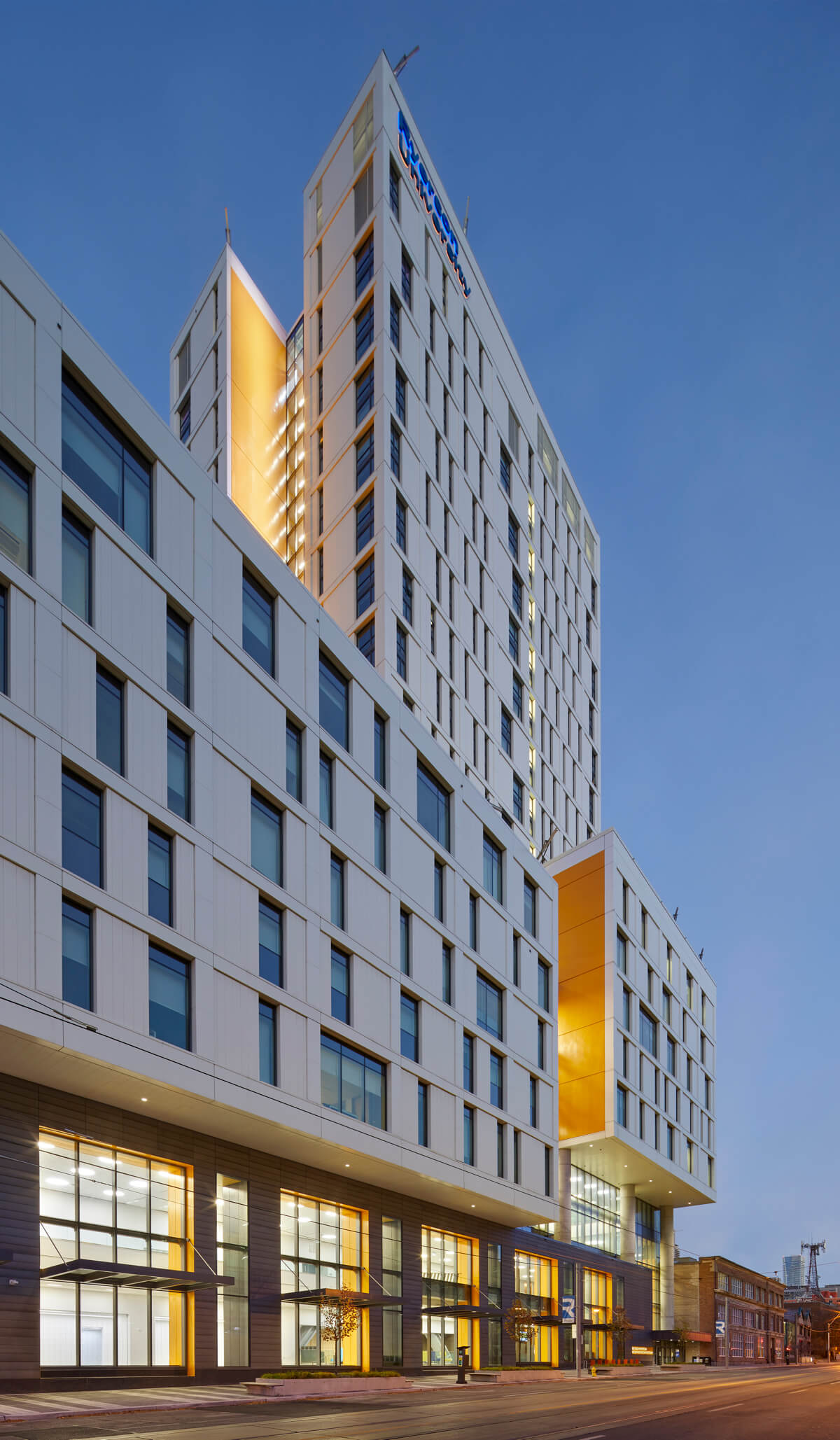 A number of clear public space priorities at grade were soon established: a through block connection between Church street and the heart of campus, a widened and enhanced streetscape and a reclaiming of the campus service lanes as safe pedestrian routes. For our team, this investment in the public realm could not stop at the ground floor but needed to continue vertically up the entire height of the building connecting the various inhabitants to each other and the city. 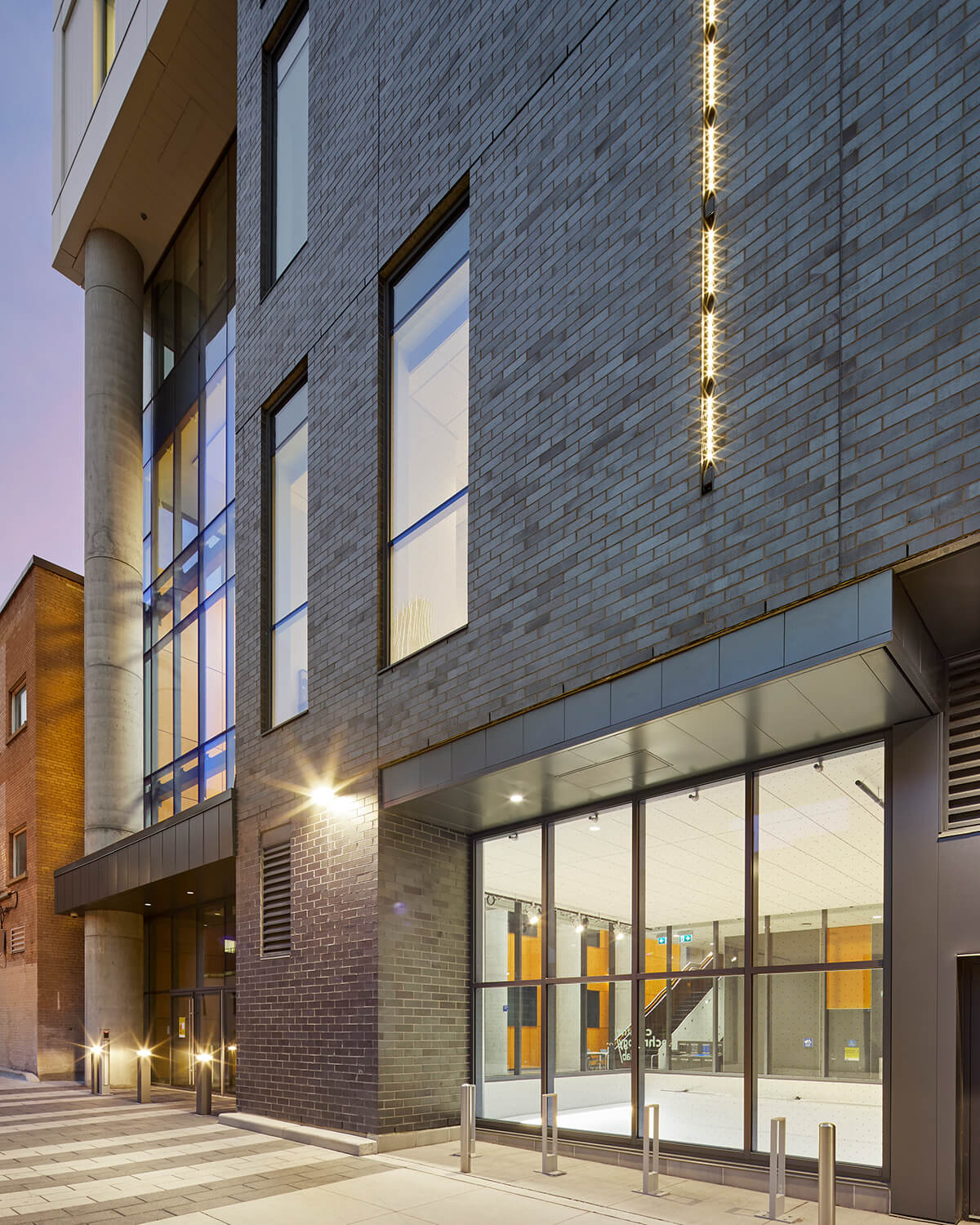 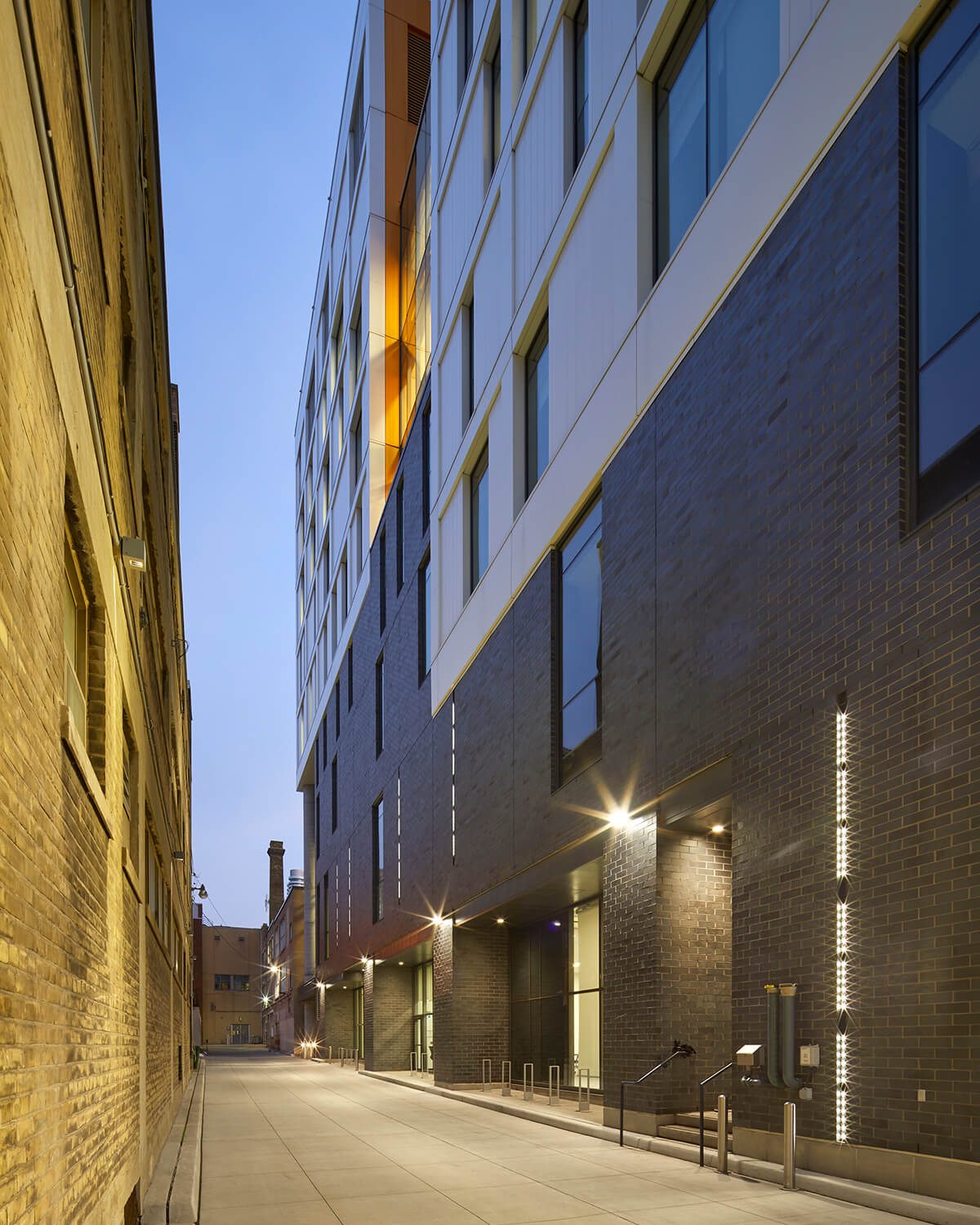 A simple diagram of a city with its parks gardens and public spaces turned on its end communicated the ambition of a distributed and connected system. A second illustration laid the foundation for the massing approach that would support this continuous public realm over both the academic and residential portions of the building. The image begins with the tower and podium model that characterizes so much of Toronto’s recent development. 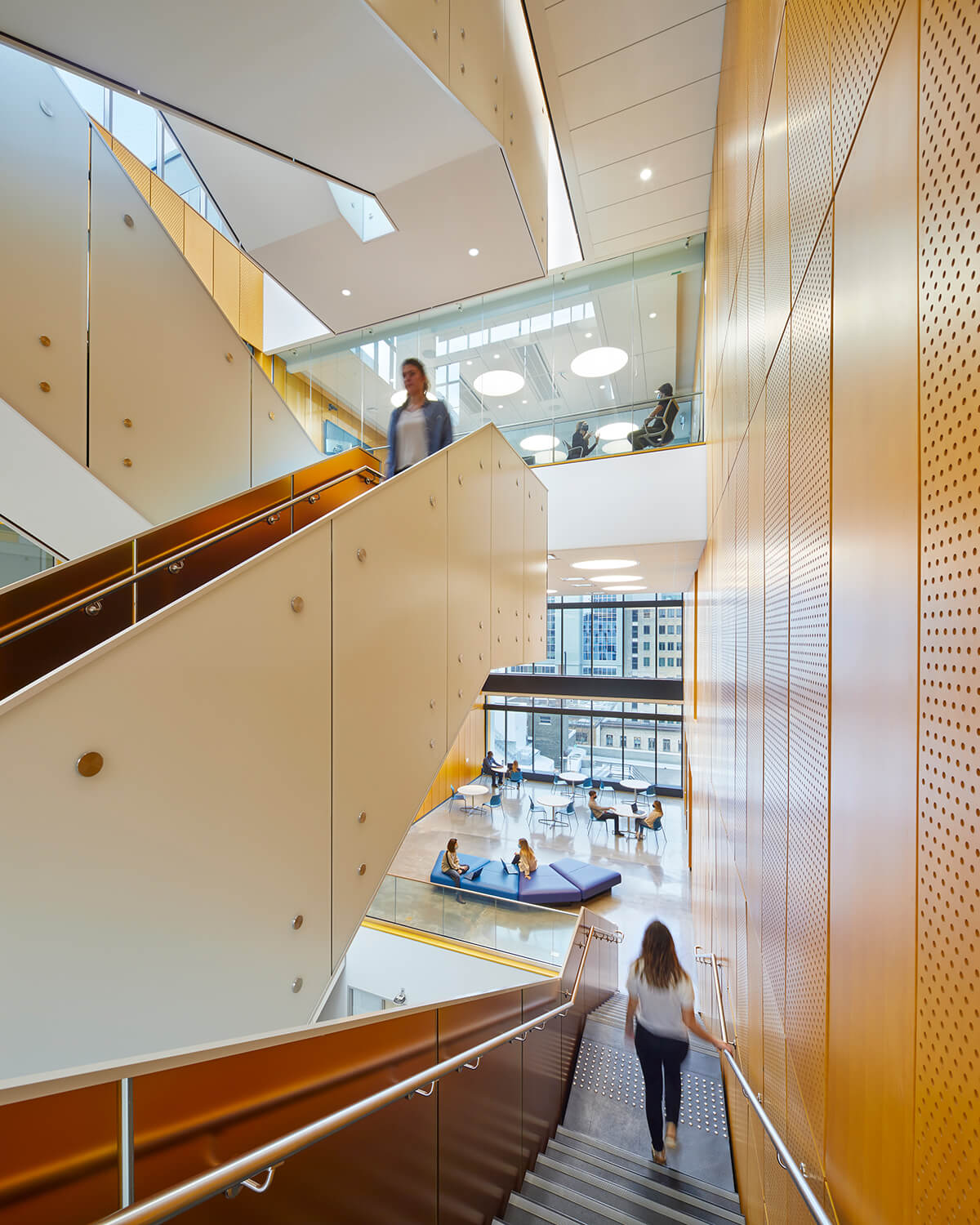 Unlike the typical mixed-use high-rise, our project would draw public life in and up. The ground floor would be porous and open, the podium would split and offset and the residential tower would reveal its internal corridor, engaging with the skyline. This illustration marked a watershed moment in the design process where a wide range of consultations, investigations and findings coalesced to convey the image spirit of the project — open, accessible and playful.

The focus on communal areas was intended to bring people learning about health in different ways together. Health, in its broadest sense, became the theme that eventually drove the development of every aspect of the design, particularly the public realm. 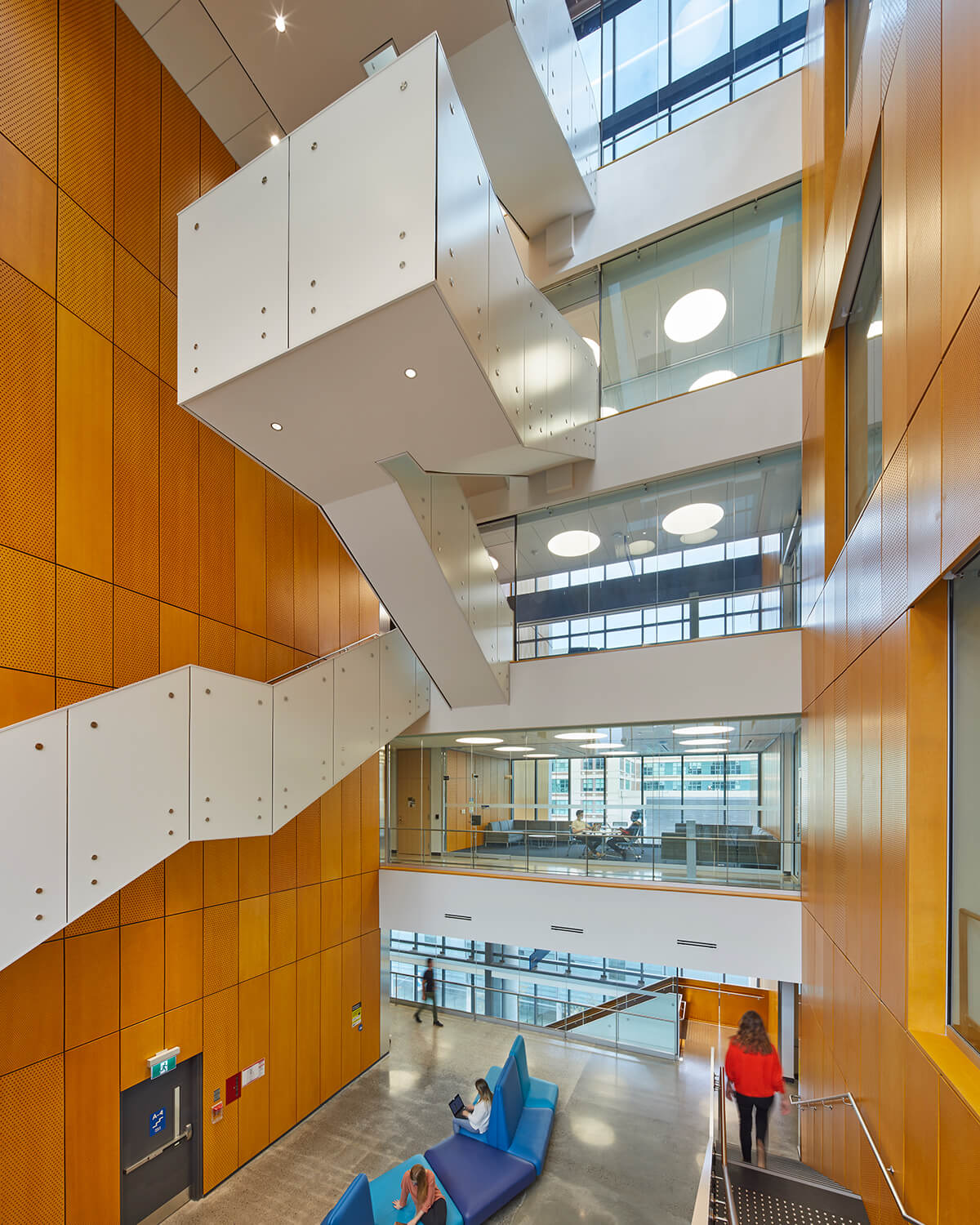 Selling the stakeholders on a building that wouldn’t make them sick and would even make them healthier was easy enough, as years of working in compromised environments had impressed upon many of them the impact that architecture has on wellbeing. We brought Ryerson’s purchasing and facilities group alongside and, with them, developed a healthy building materials specification — not just for the DCHSC but for all future projects.

Products and systems that contain substances known to be harmful to human health (either during their fabrication or once installed) were effectively “scrubbed” from the design specs. With the toxins out of the way, we focused our design efforts on elevating user wellbeing. In the completed building, the mechanical system brings 100 per cent fresh air into every space, expelling stale air and recovering the heat from it. 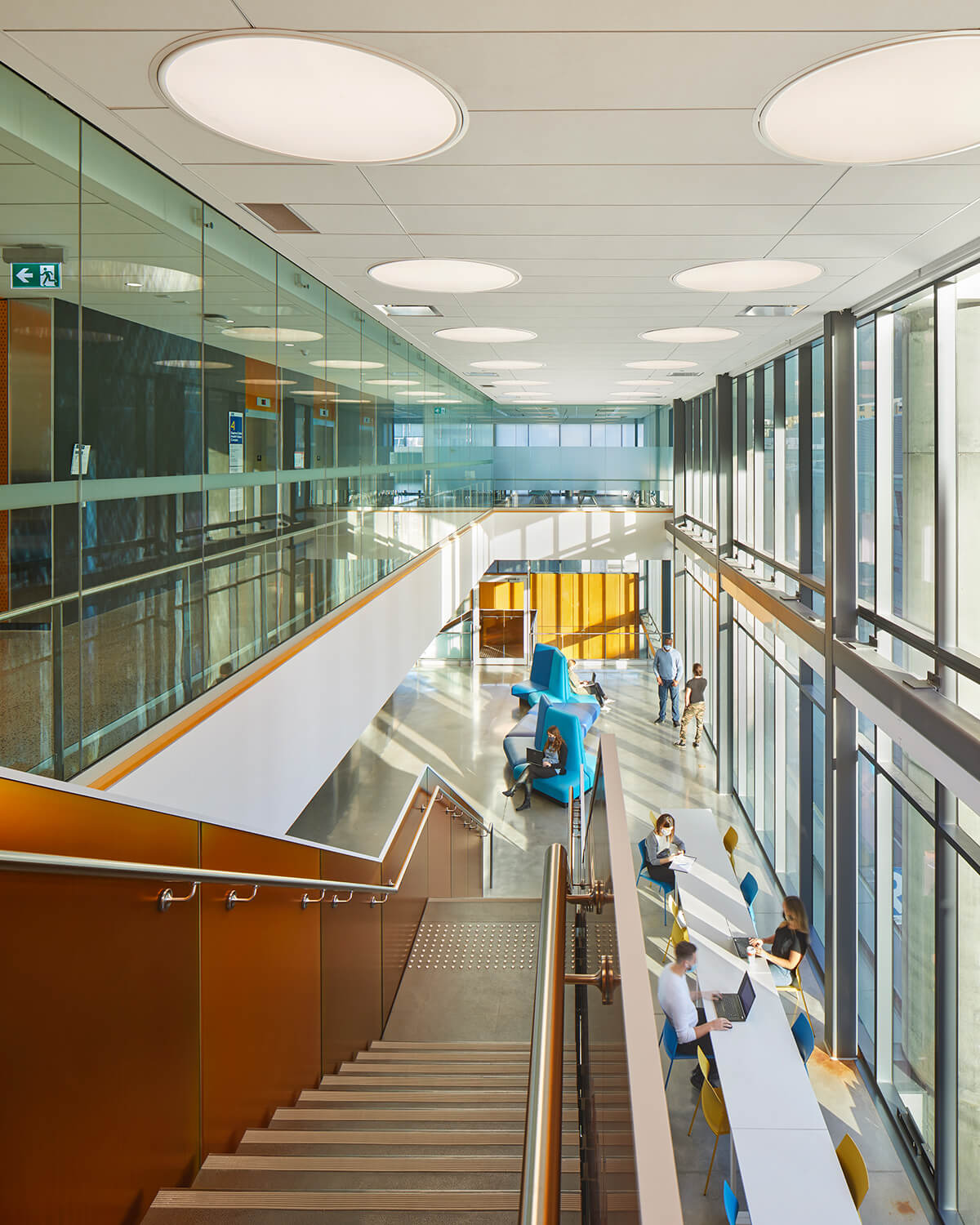 Abundant daylight and views connect occupants to the city unfolding beyond. An elevated green roof and urban farm are available to the building’s living and learning community. Rather than a single towering atrium, a collection of stacked and offset two-storey voids are linked by equally prominent stairs or elevator banks that invite people to get moving. Each area is different, connecting to unique programs and views and conceived as a series of destinations that the occupants can explore in manageable increments. However, they all work together as part of a social space continuum built to a comfortable human scale. 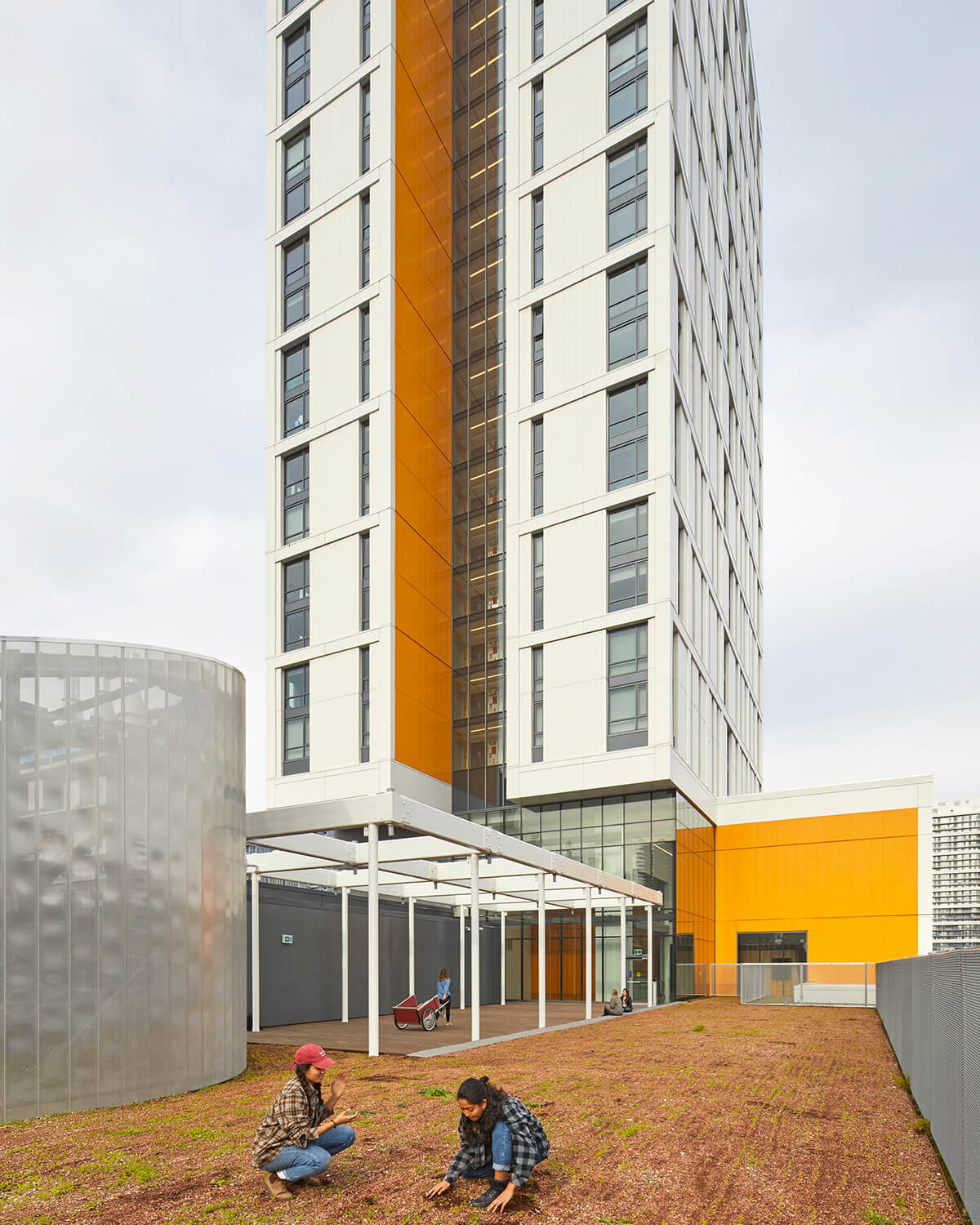 Building a Culture of Sustainability

Featuring aggressive energy, carbon and water reduction targets, the Daphne Cockwell Health Sciences Complex is designed to LEED Gold standards. It’s also designed to teach. While the structure’s sustainable features positively contribute to the health of the environment day to day, there is a long-range plan that involves building a culture of sustainable occupation and construction. 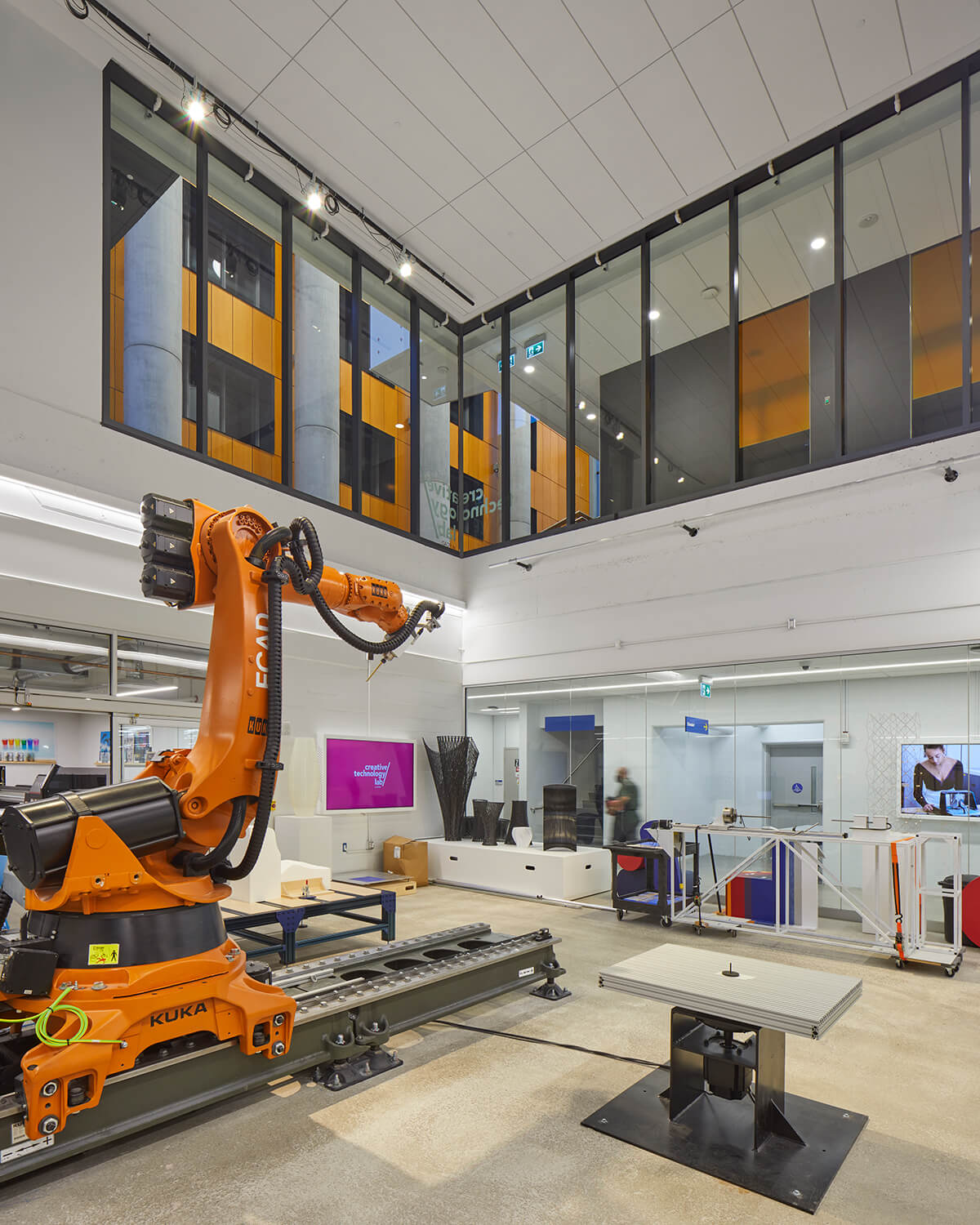 Ryerson, like many institutions with a large inventory of buildings, historically struggled to understand how its spaces were performing. The DCHSC is equipped with advanced metering for water energy consumption for a wide variety of space types ranging from residence rooms to laboratories, classrooms, offices and manufacturing areas, allowing data sets around building performance to be easily created. 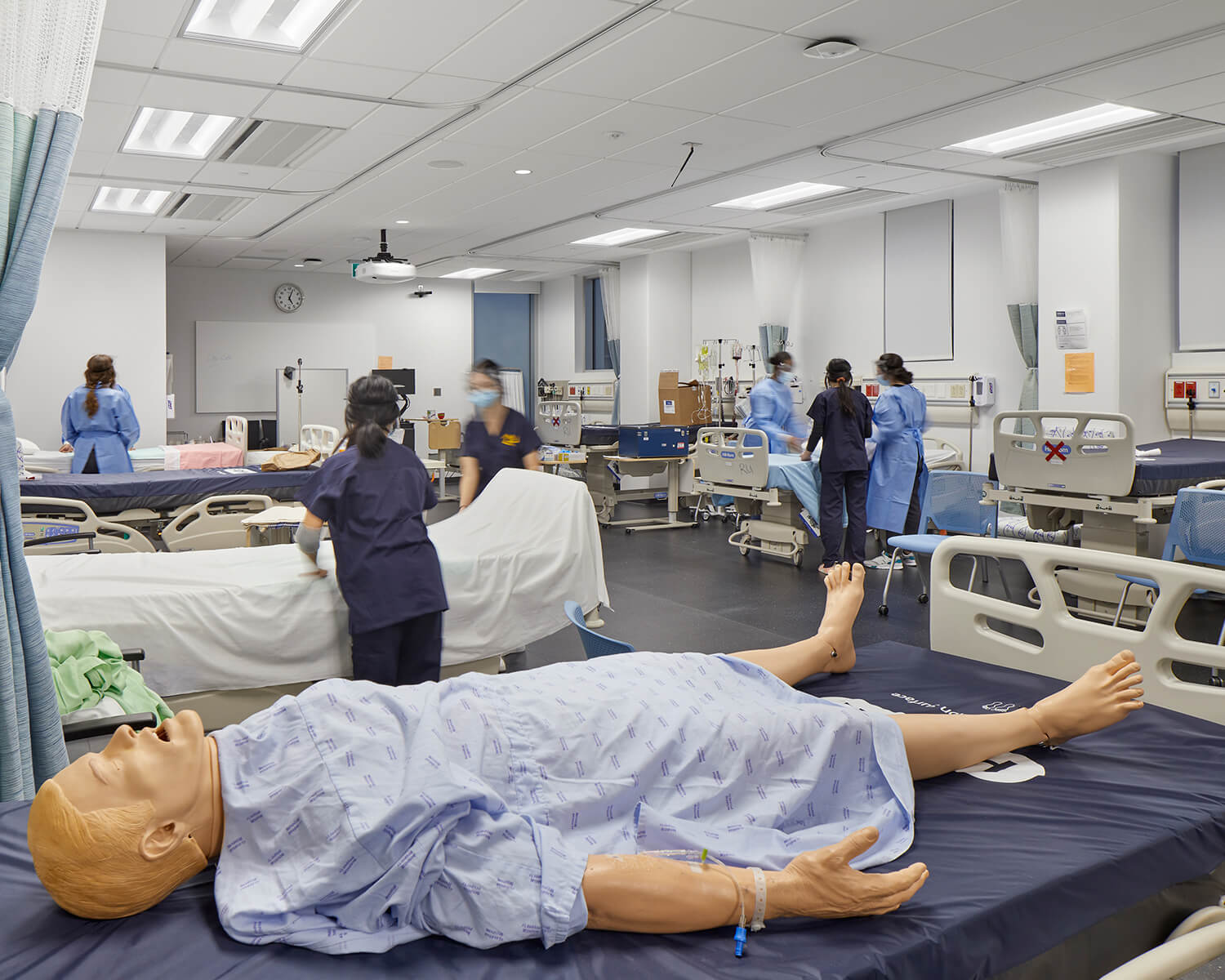 At another level, this granular approach to monitoring can also influence occupant behaviour. Each residence “house” — a community of 34 beds over two floors — has its water and energy consumption recorded, the intention being the creation of a lively competition among the communities to reduce energy use while educating young adults of their environmental impact.

Looking back, I vividly recall my first discussion with the building’s intended users. The plan was to meet with the heads of Nursing, Nutrition, Occupational and Public Health and Midwifery in their existing spaces to understand their needs and current challenges. As professions, they were trained differently and each bring distinct priorities to the clinical setting. Could living and learning under a shared roof shift those cultures, allowing them to influence one another and perhaps converge around the best interests of the patient? As architects, could we interpret and then support a new, shared culture through our design? 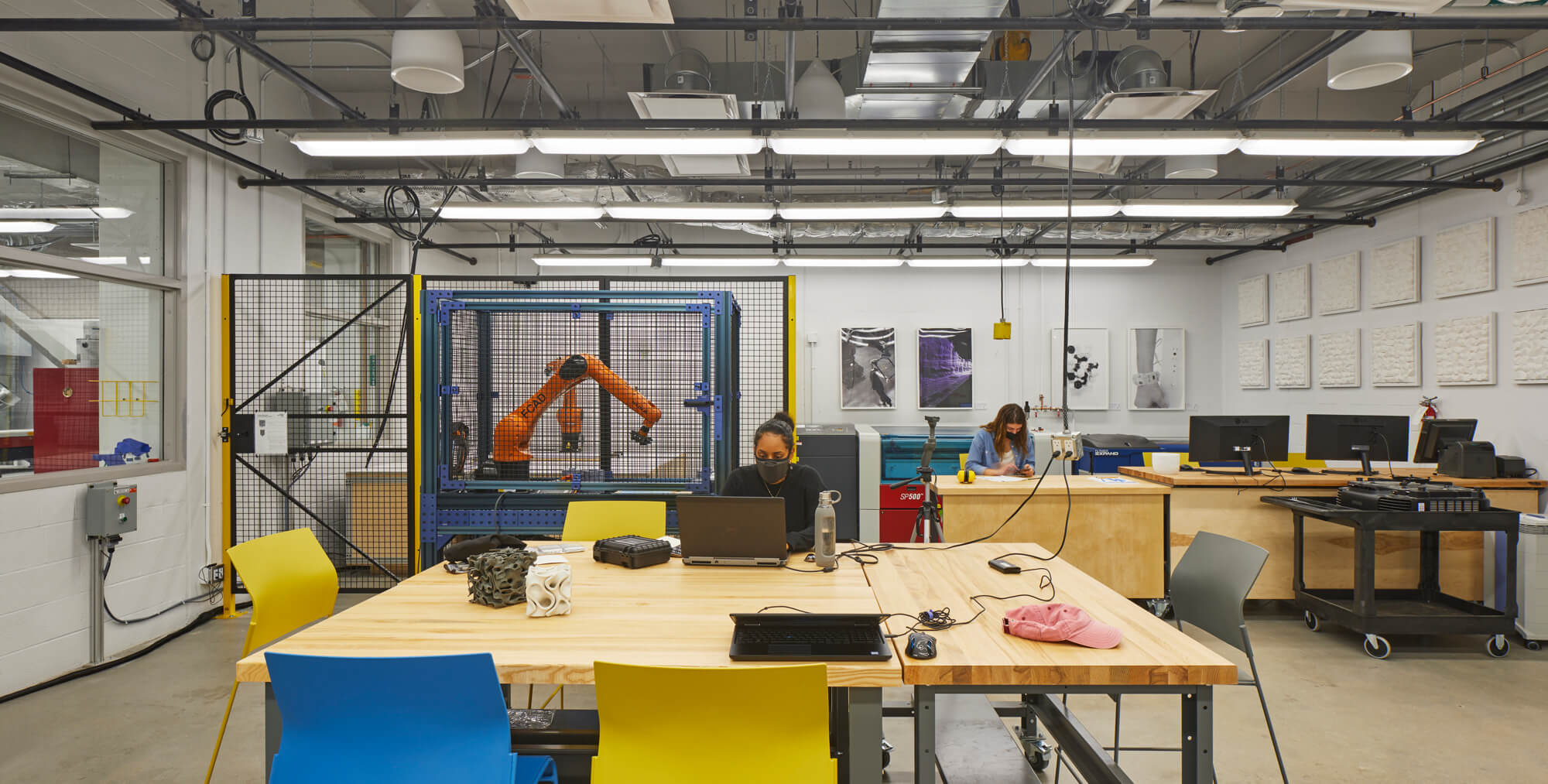 In the completed complex, nursing simulation labs, robotic fabrication, an urban farm and student bedrooms all unfold as one navigates up through the building’s vertical public realm. The design uses the strategic location of shared spaces around communal zones to encourage interdisciplinary interaction. 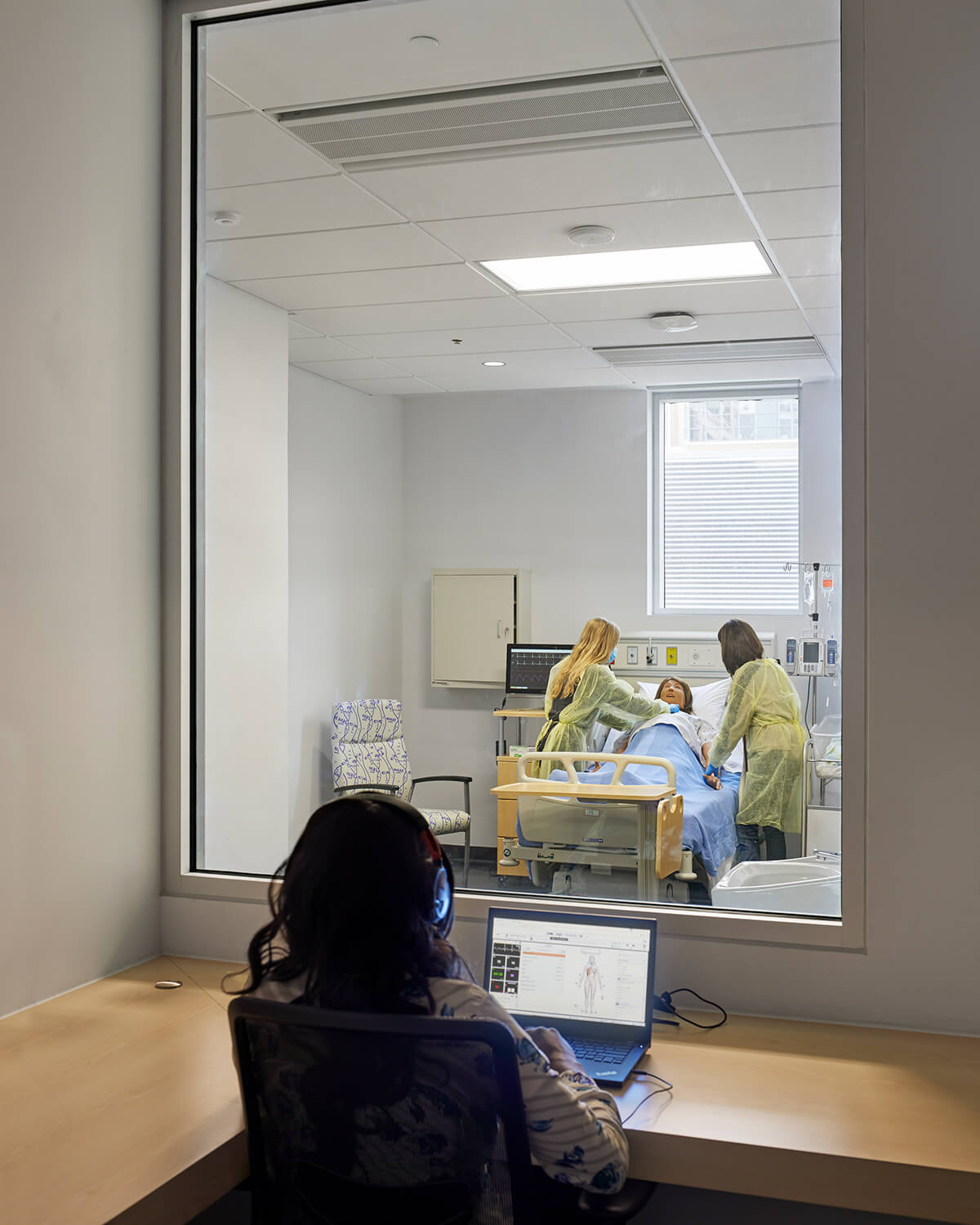 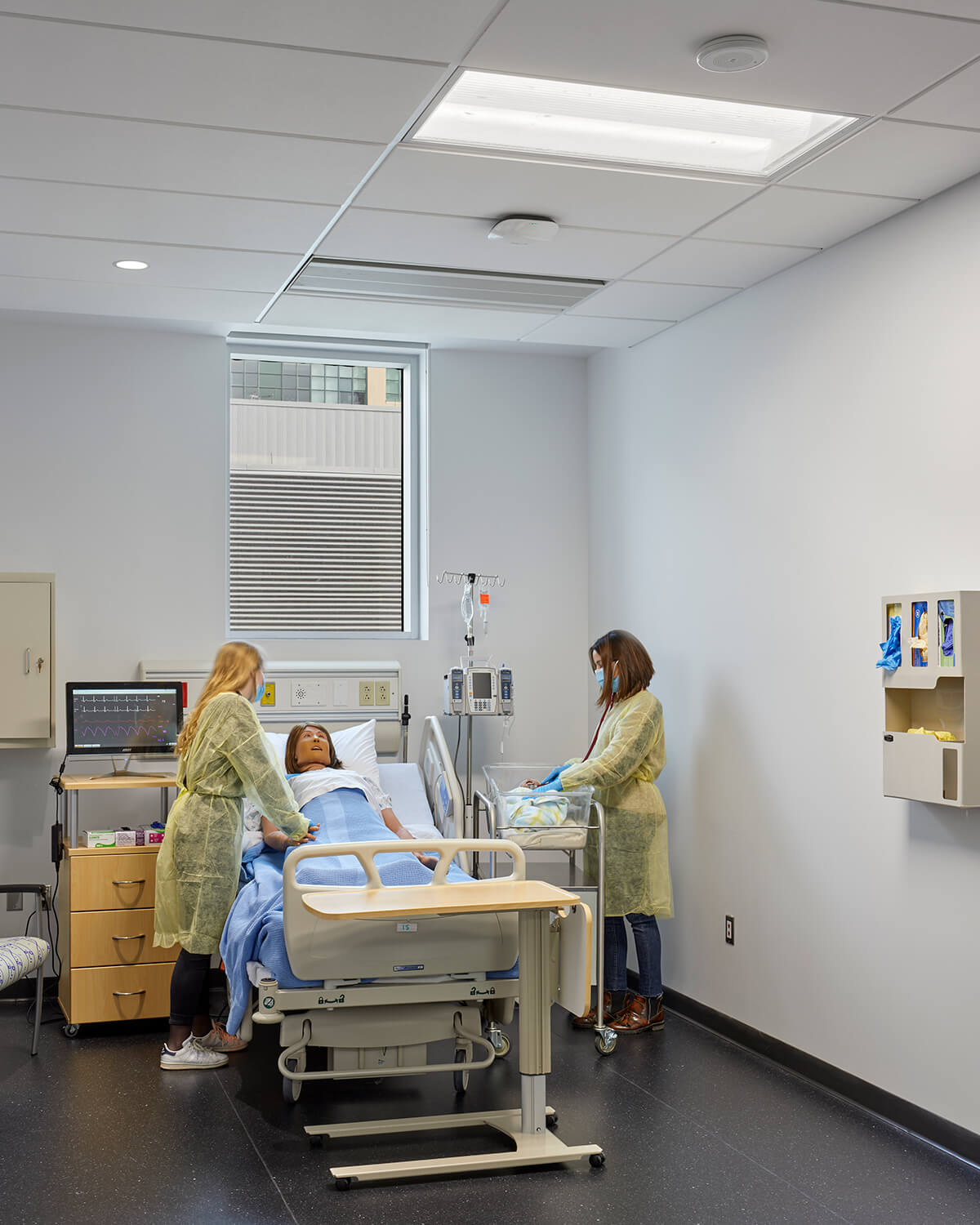 For example, booth nursing and midwifery students make use of objective structured clinical observation (OSCE) suites in their training. These areas allow students and instructors to observe interactions between students and patient actors in a realistic clinical simulation. Rather than create dedicated OSCE suites for each department, our team proposed combing them in a central location accessed from the fifth-floor atrium lounge. As a result, the two schools can watch each other in action, participate in combined simulations and create a dialogue around best practices for meeting patient needs when both midwives and nurses are providing care. 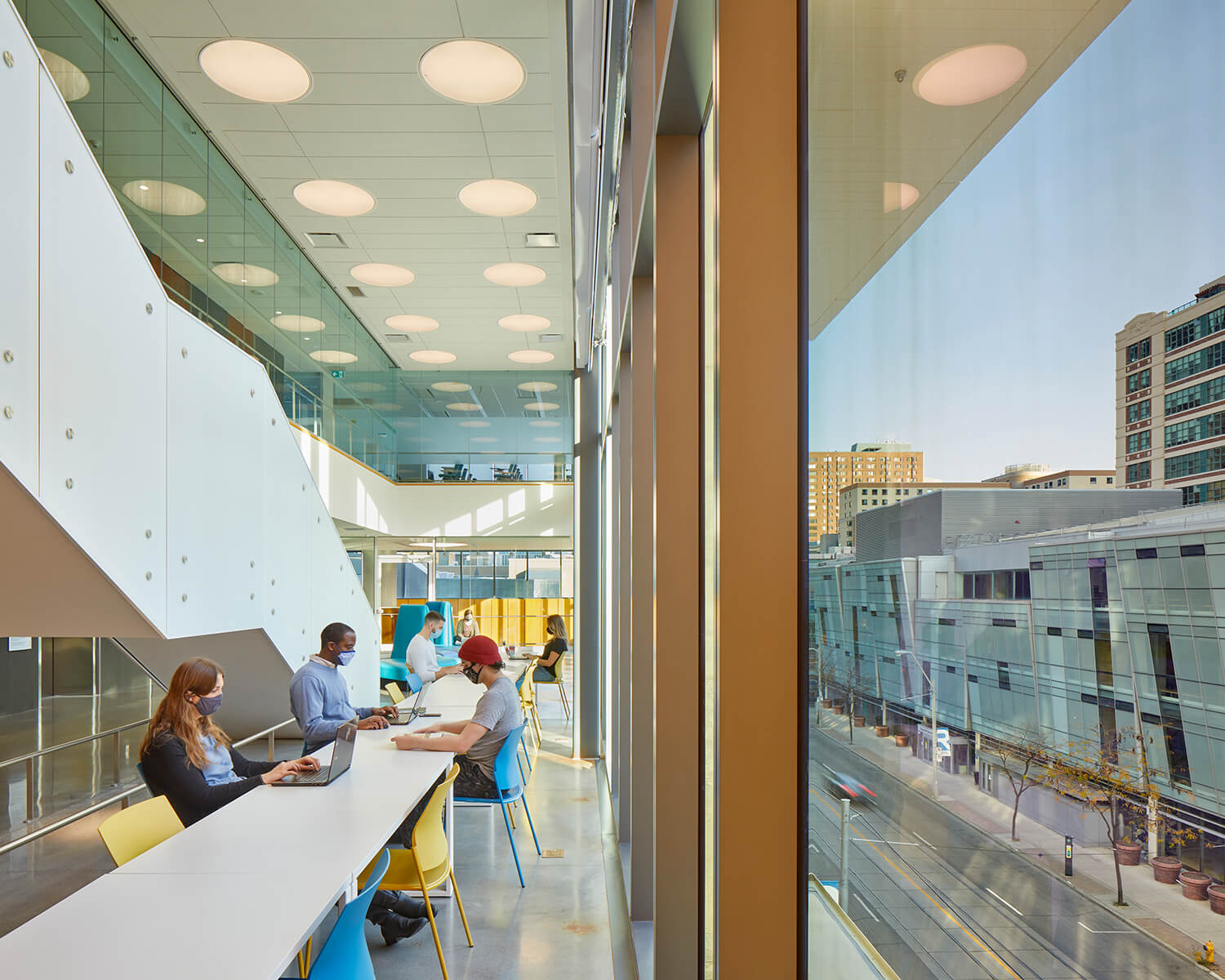 In the end, even with the diversity of activities and programmatic offerings within, the city remains a constant, unifying presence — a backdrop to the new communities and ways of learning that are already beginning to form.