A Dramatic Dinosaur Museum by Teeple Architects
Hugging the earth like a giant reptile, the Philip J. Currie Museum in the remote prairies of Alberta is devoted to dinosaurs, inside and out. 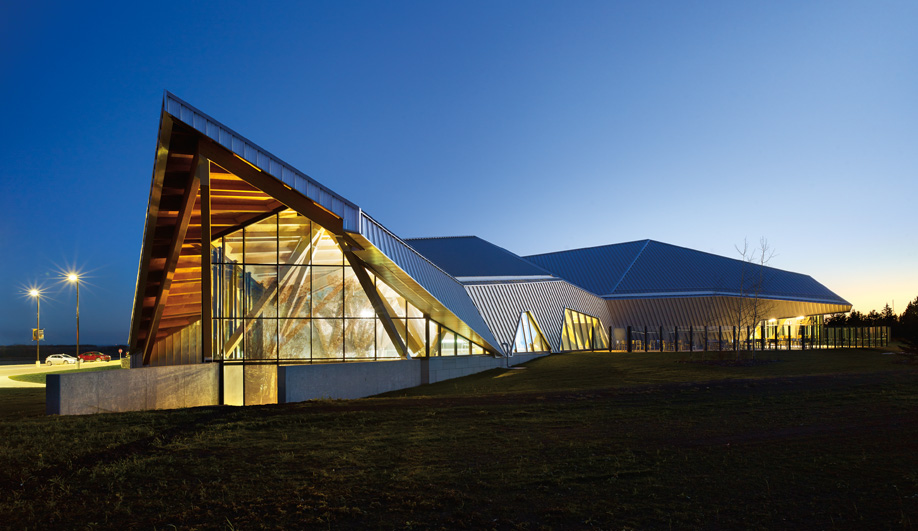 A glazed exit yawns open like a gargantuan mouth. Much of the exhibit space is below grade, maintaining the building’s low profile.

Hugging the earth like a giant reptile, the Philip J. Currie Museum in the remote prairies of Alberta is devoted to dinosaurs, inside and out.

The road that winds through the Canadian prairies from Edmonton to Whitehorse is long and tedious, dotted with farmers’ fields and industrial plants in equal measure, and little else. But 500 kilometres northwest of Edmonton, outside Wembley, Alberta (population 1,383), a national landmark is dedicated to the rich paleontological history of a region where, tens of millions of years ago, herds of giant horned dinosaurs roamed. 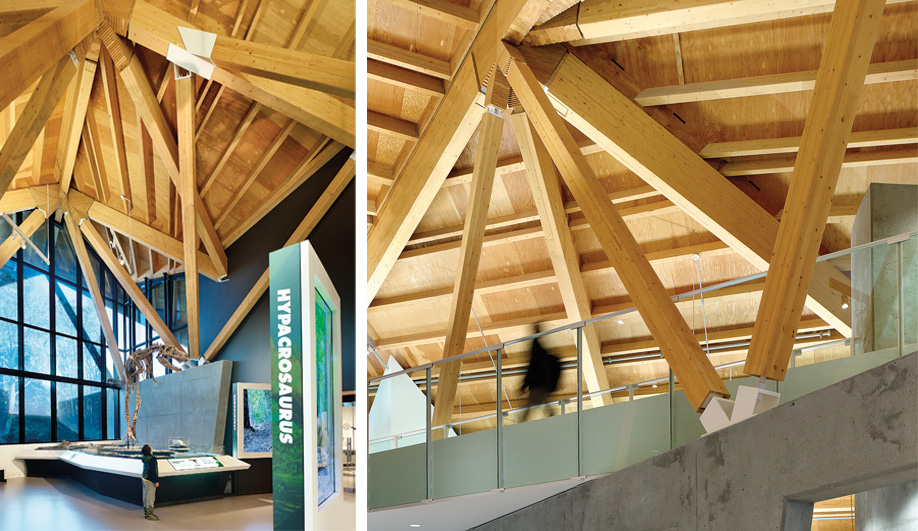 Left: The exhibit design was led by Reich + Petch. Some of the articulated skeletons on display can be “re‑skinned” and “reanimated” with an augmented-reality app. Right: British Columbia engineering firm Structure­Craft Builders was brought in to design and build the unique connections, where up to seven beams meet at unusual angles.

The Philip J. Currie Dinosaur Museum, named for the renowned Canadian paleontologist and designed by Toronto’s Teeple Architects, sits virtually on top of one of the world’s densest fossil sites: the so-called River of Death bone bed at Pipestone Creek, where the first known Pachyrhinosaurus lakustai fossil was discovered by a local teacher 42 years ago. From certain angles, the museum’s profile does evoke a giant reptile, with its sinuous, low-slung shell and gaping mouth – even before you spot the articulated Gorgosaurus skeleton through the glazed front entrance. Although the resemblance is intentionally vague, meant to linger in the back of one’s mind, “It’s a parallel structure,” says principal architect Stephen Teeple. “It’s got legs, skin, bones.”

The resemblance becomes more than superficial inside, where over 100 glulam beams and struts support a free-form geometric ceiling that peaks 14 metres overhead. To gaze up at it is like staring into a dinosaur’s rib cage. The prominence of this carapace belies the fact that most of the building is subterranean. Windows at grade, inserted between the zigzagging columns, serve as clerestories in the sunken triple-height main hall, a form inspired by the ad hoc canopies that shelter fossil dig sites in the surrounding hills. 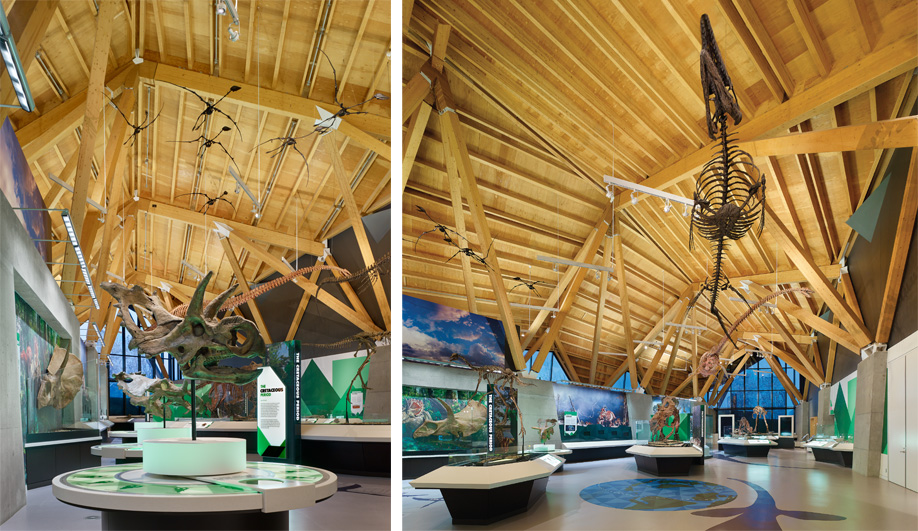 A model of the bone bed greets visitors around the first corner, before they traverse a series of catwalks overlooking the exhibition space below. This gangway gives an up-close view of the pterosaurs and plesiosaurs sus-pended from the rafters, and even offers glimpses of a working lab through a section of glass floor. A staircase descends through a fossil gallery of mostly local species to the final corridor: a geological exhibit that places the tiny town on Earth’s four-billion-year timeline.

“The farther you descend into the building, the farther back in time you go,” explains Teeple. “You discover the bone bed, the work of the paleontologists and so on. They discover, you discover.” The narrative experience was established before the Toronto firm won the 2010 bid: Teeple’s Earth Sciences Museum, at the University of Waterloo in Ontario, was also a reverse chronological descent into the earth and the past, where the architects similarly used earthen materials, including concrete, to evoke a sense of delving below the surface. 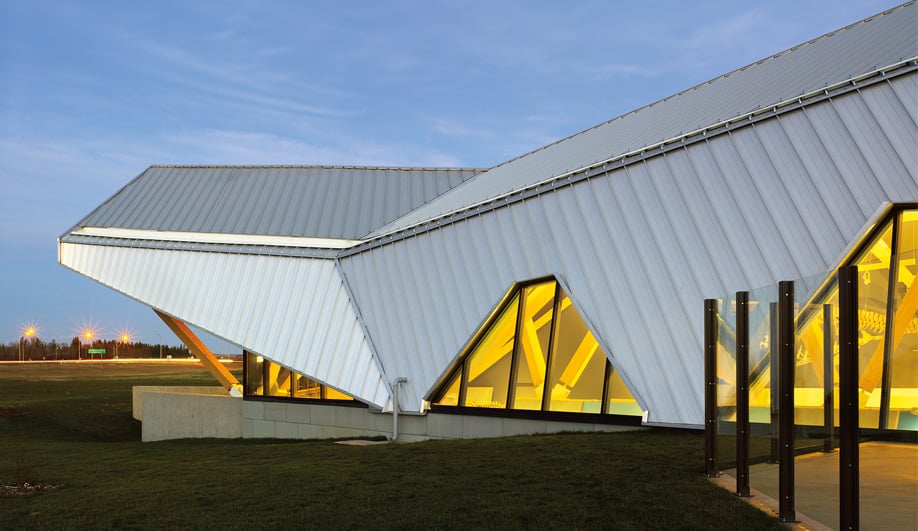 At a latitude of 55º North, the large windows required triple glazing with two low-E coatings and an extra-wide thermal break, but allowed Teeple to throw to views of the landscape.

Meanwhile, this museum’s above-ground Douglas fir skeleton comprises so many unique angles that a British Columbia engineering firm was brought in to invent the connectors. StructureCraft president Gerald Epp says the most significant innovation is the nodes, where up to seven beams and columns meet. Developed using Grasshopper and created from sandwiched plywood, these nodes eschew the easier option of welded steel in favour of aesthetic cohesion. “We’ll probably never do it again,” Epp says.

Teeple was forced by the county’s shrinking budget to also shrink the museum’s size by nearly one-fifth, to 3,900 square metres, among other adjustments. “We’d hoped for shingle zinc cladding, which would have had the effect of scales,” he says. Instead, the use of standard seam aluminum cladding shaved $1 million off the $25.4‑million construction budget. It doesn’t detail as cleanly, though Teeple concedes that it fits in better among the barns and warehouses of Alberta’s rural and industrial north.

After a three-year delay, as philanthropists (including comedian and dinosaur enthusiast Dan Aykroyd) rallied for funding, Teeple was impressed by the locals’ perseverance: “They never doubted the vision, because they wanted something special to bring people to their town.” ­