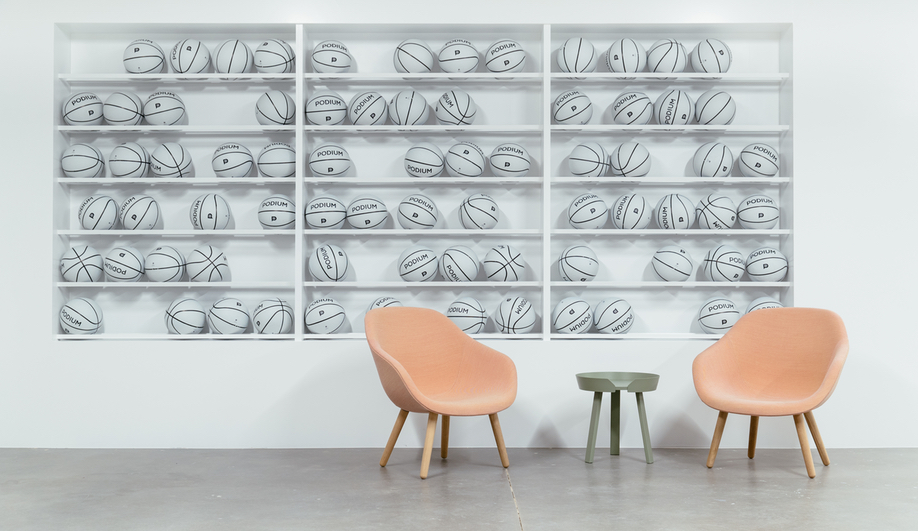 For interior designers, conceiving an office for a tech company offering sometimes-abstract services can be a challenge. But that’s often what leads directly to inventive branding outcomes: for Slack, Dubbeldam Architecture + Design used zigzagging light fixtures to illustrate lines of connection. For Shopify, Linebox Studio created themed floors, illustrating the breadth of the e-commerce platform’s clients. And for Podium, a startup offering a reviewing, messaging and insights platform for local businesses, Untitled MFG has designed a 11,610-square-metre office that reflects the lifestyles of its rapidly growing ranks of employees. 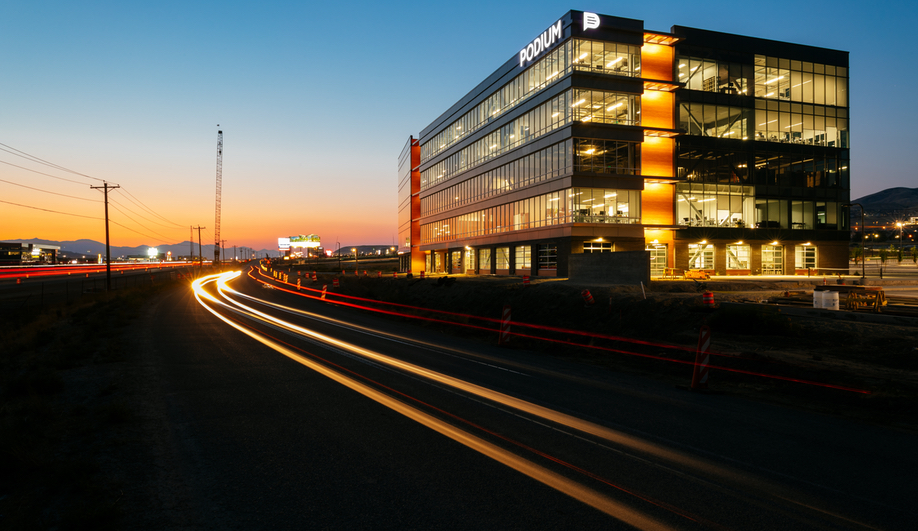 After securing a five-storey building in Lehi, Utah, Podium’s founders wanted a workspace that articulated the brand’s values. After experiencing explosive success – the company was ranked 13th fastest-growing private company in America by Inc., and recently made Forbes’ Next Billion-Dollar Startups list – CEO Eric Rea grew his company from a five-person operation to a 400-employee enterprise. And his staff is young: nearly 90 per cent are millennials, and most of Podium’s executives are in their early 30s.

So, Rea decided: this couldn’t be a standard corporate office. “It was important for us to have employees and visitors immediately know that they were coming into a company with a rich sense of culture,” he says. “We didn’t want it to feel like a corporate environment, because we aren’t corporate. We wanted our employees to feel inspired and influenced by something outside of themselves.” 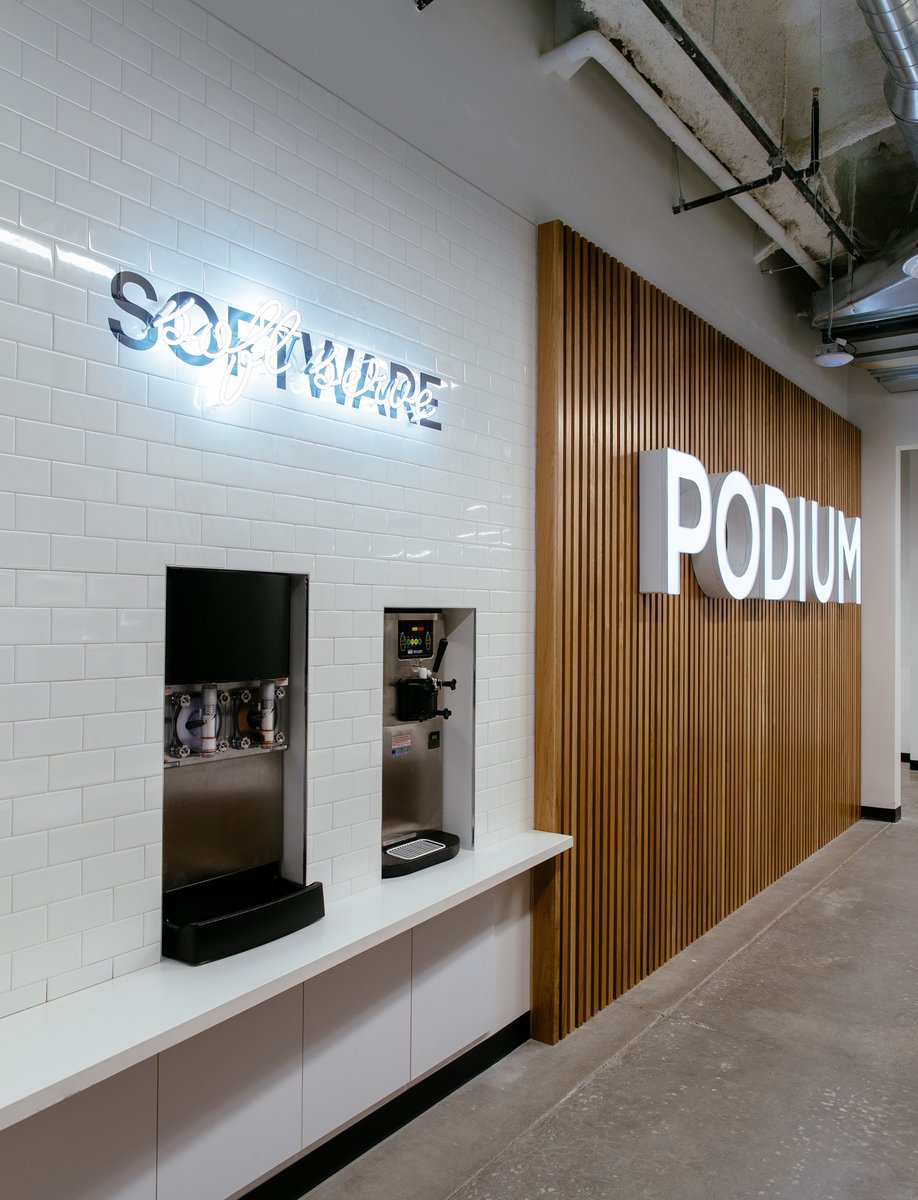 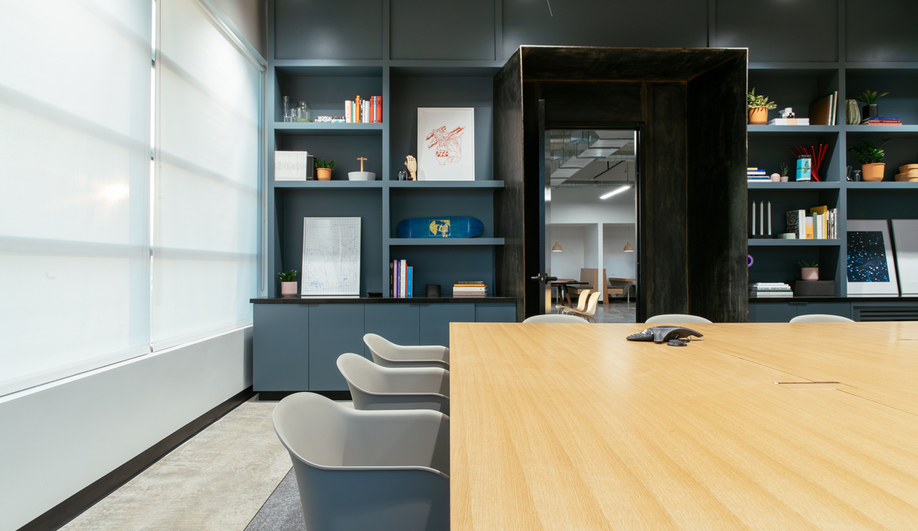 To achieve this vision, Rea’s team selected Untitled MFG, a design agency founded by one-time Rapt Studio principal Cory Sistrunk, who designed spaces for Dropbox, The North Face and Apple. After analyzing office “pain points,” Untitled MFG found the tie that binds Podium’s culture: a love of streetwear. “We began to look outside of every other tech office and be inspired from the team’s cultural undertones of street fashion,” says Sistrunk.

“We spent time talking about the first time we visited a certain store or, texting photos from our individual travels to New York or Tokyo back and forth over the course of the project.” 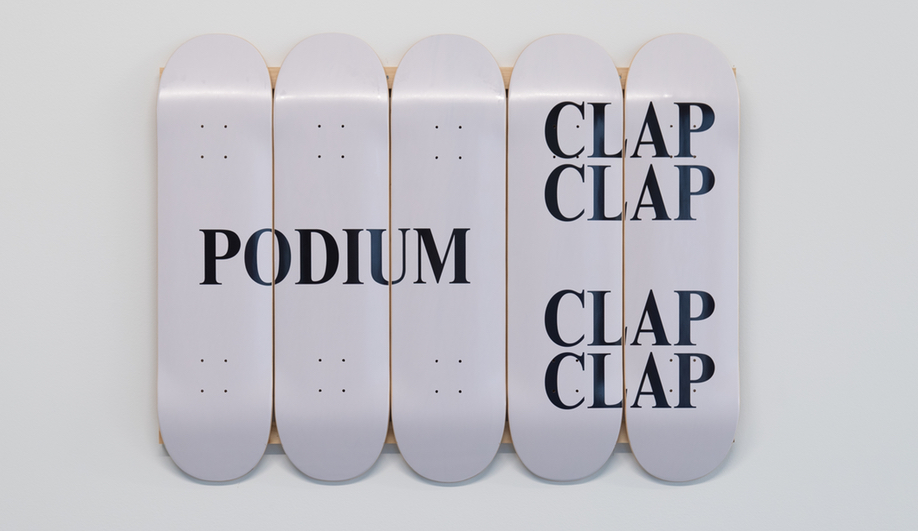 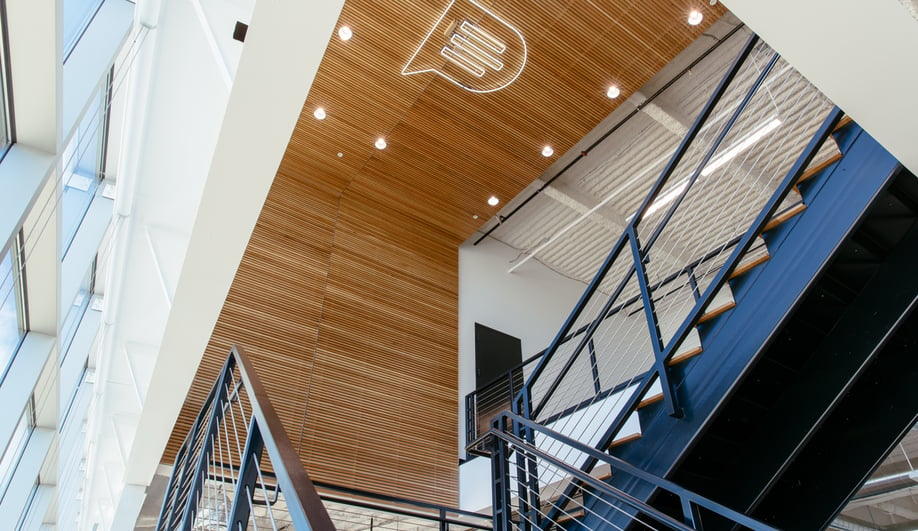 Sistrunk’s initial challenge, he says, was working with a sprawling space: keeping a five-storey office unified, intuitive and engaging can be difficult. To solidify Podium’s identity, simple-yet-bold graphic installations were installed throughout the office, which include clusters of skateboards, neon-lit signage, and branded rows of basketballs in waiting areas. It achieves the goal of adding visual intrigue while doubling down on Podium’s playful visual identity.

Look closely, and there are also works from around the world, including art by Stephan Marx and Johanna Burai (who provided the mural of George Costanza and Jon Snow riding a tandem bike, below), photography from Weston Colton and work from local Utah designers Actual Source. “I am lucky to collaborate with other designers/artists every day, but it’s exciting for me that people working at Podium will have access to these types of things in their place of work,” adds Sistrunk. 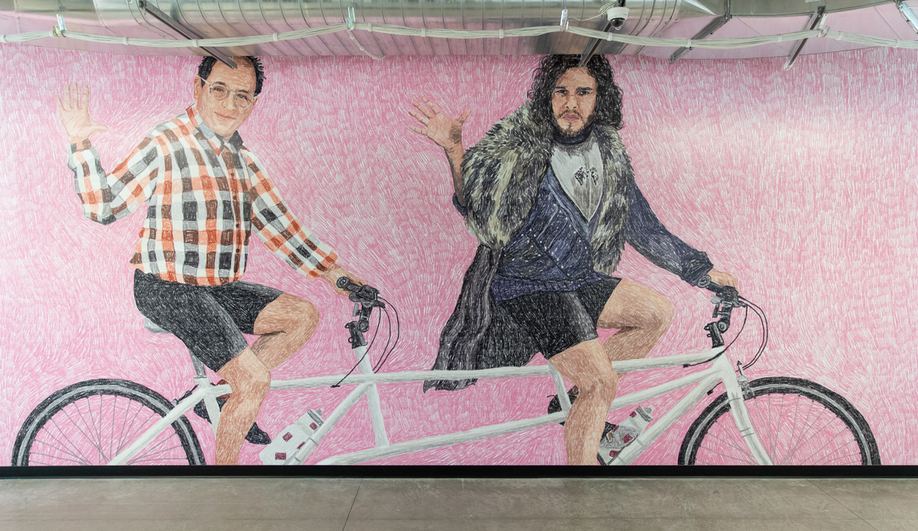 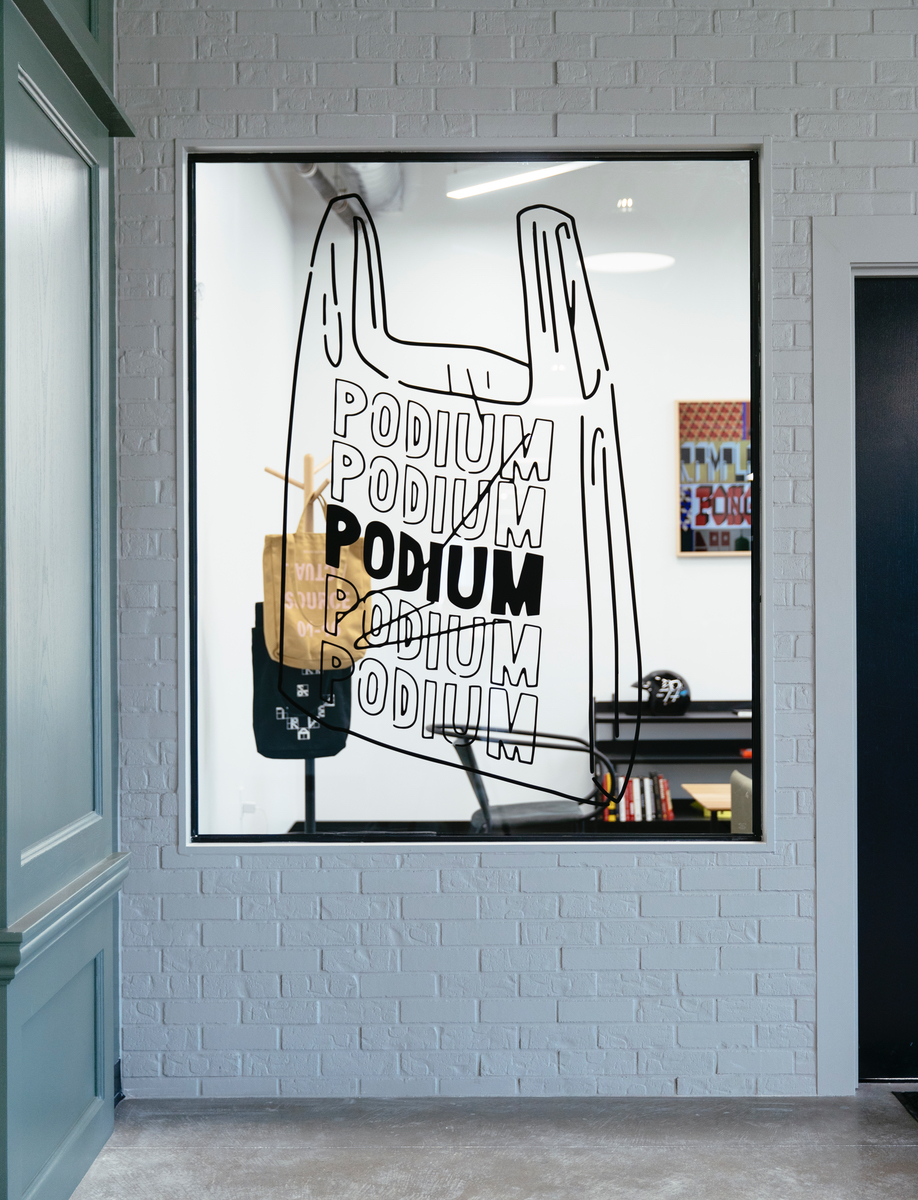 To guide how users flow through (and interact with) the building, Podium took liberal cues from retail and hospitality spaces. Rea specifically points to influential Boston streetwear shop Bodega – though he also cites a fondness for L.A.’s Stussy boutique, KITH’s Soho flagship and Boro Hotel – as an inspiration, while Sistrunk revelled in the experience of entering New York’s Comme des Garçons. “I will always remember the first time I went to the Comme des Garçons store in New York with that crazy, spaceship-feeling entry and pivot glass door, and freaking out that someone was willing to make even just the store entry a symbol for what the brand stands for,” he says.

That spaceship-like experience undoubtedly informed some of Sistrunk’s key spatial moves – note, for example, the Epcot-esque plywood breakout room below. 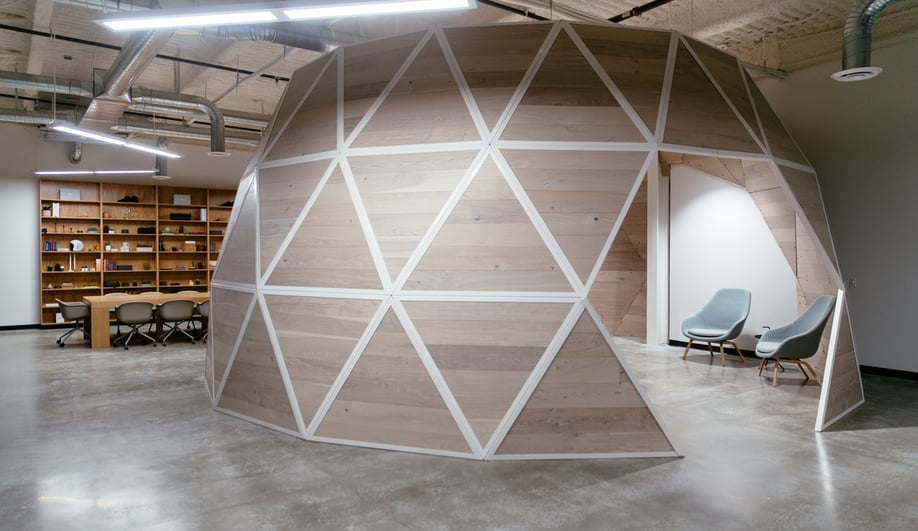 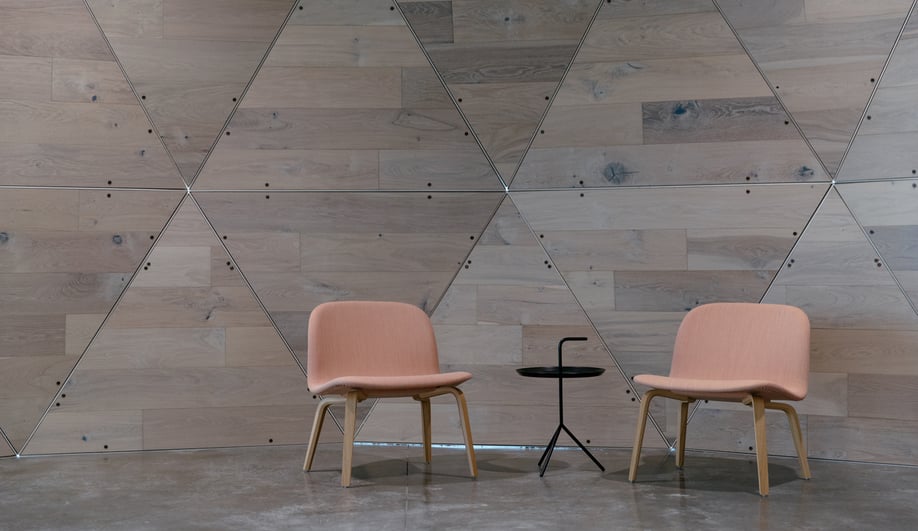 Despite the eye-catching branding on display over Podium’s five storeys, the material palette was kept deliberately neutral: raw concrete, wood and steel is the basis for most floors, as Sistrunk tried “to keep the space timeless, and yet a canvas for the people and the brands that live there to continually be evolving.” Currently, the office boasts plus-sized collaboration zones – a giant set of bleachers, for example, anchors its atrium – and playful amenities. There are soft-serve machines by its reception. Pickleball and spikeball courts, which lend a playground-like atmosphere, were added to the building’s exteriors. And 650 square metres of the space is a gym, with CrossFit equipment, classes, exercise machines and bikes.

And speaking of bikes, the building’s top floor is entirely dedicated to the two-wheeler, which nods to the company’s origins. Its first office was above a bike shop, and to pay tribute (and to encourage employees to ride to work), it dedicated its fifth floor to bike maintenance. It’s yet another example of Sistrunk’s attempt to create an office that actively engages with the people who spend their days there. 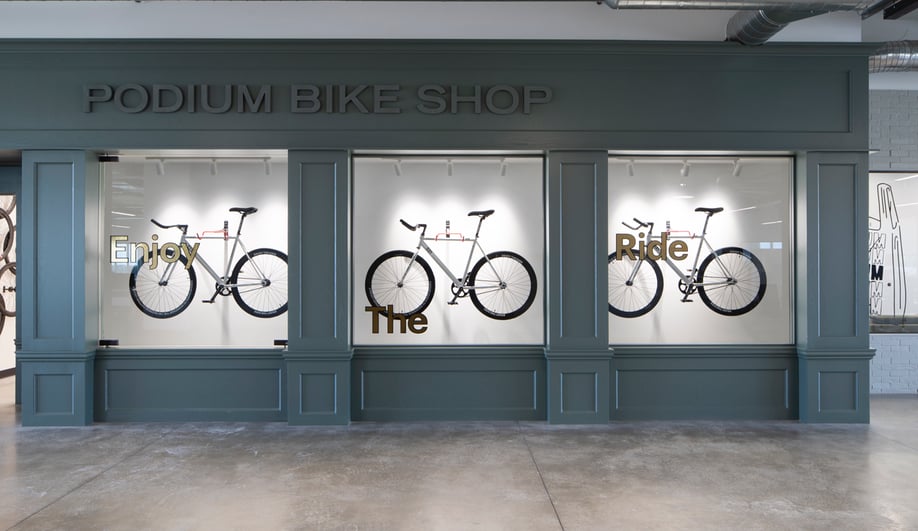 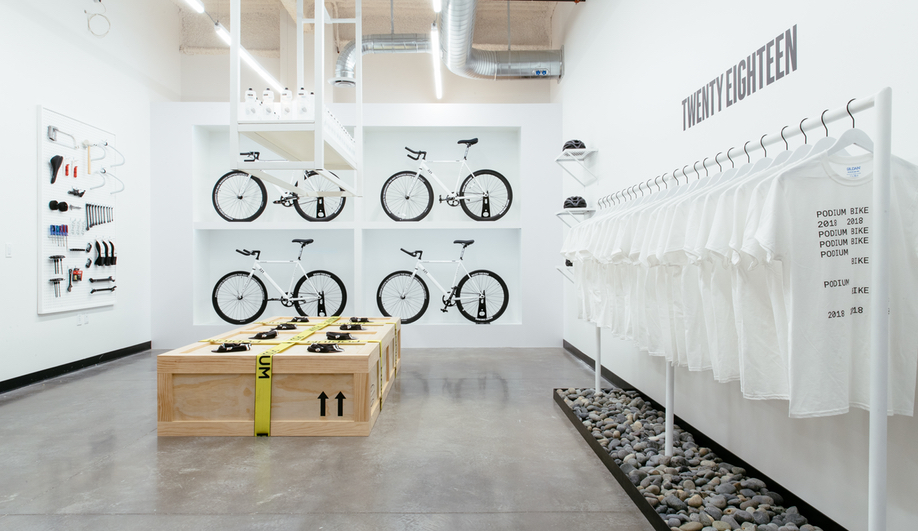 “Podium’s office is trying to support and inspire the people that move within those walls,” he says. “I think the main way we tried to disrupt the common is the way the space is broken down, allowing architecture to create more spaces that are natural to the different functional needs, be that for teams or individuals instead of the perimeter or interior bands of office space.” 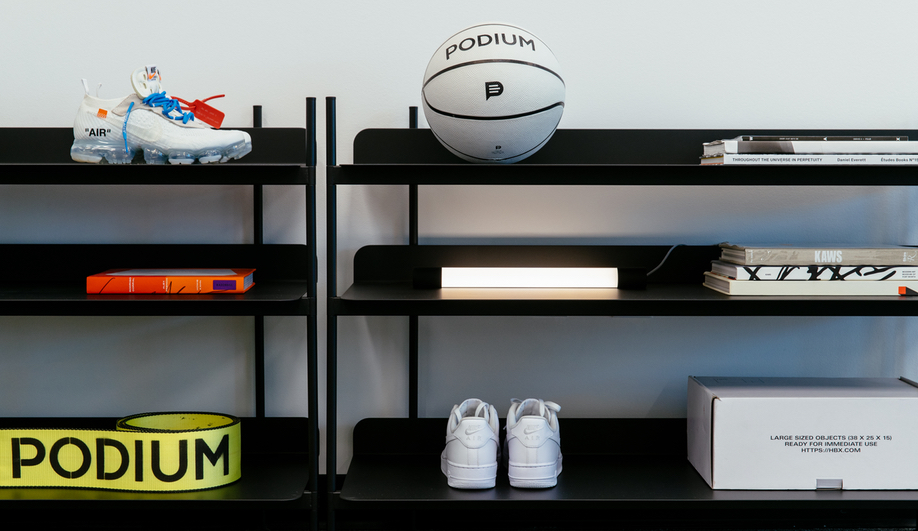