Inside Peter Zumthor’s Mentor Program
Spending time with the architect and Pritzker laureate, as he nurtures new architecture talent for the Rolex Mentor and Protégé Arts Initiative. 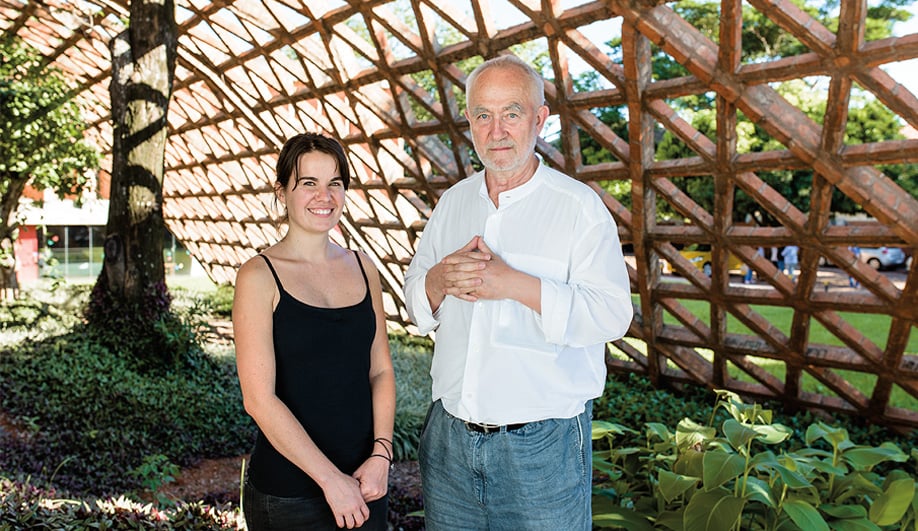 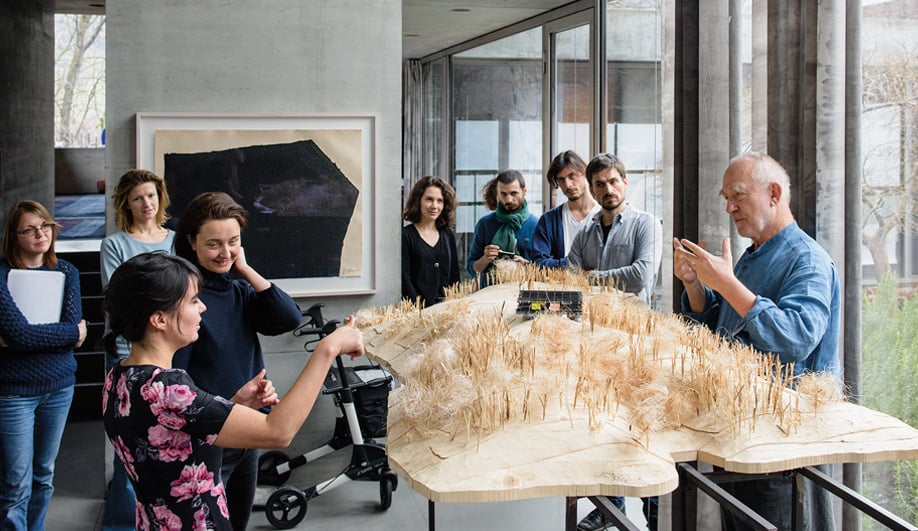 “I paint the paintings, but I need others to contribute so I’m not alone,” says Zumthor who operates like an old-school master. 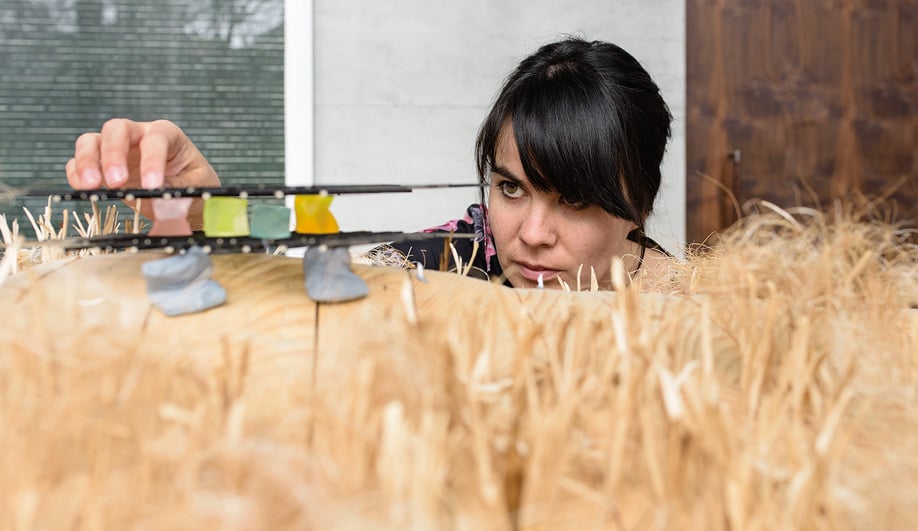 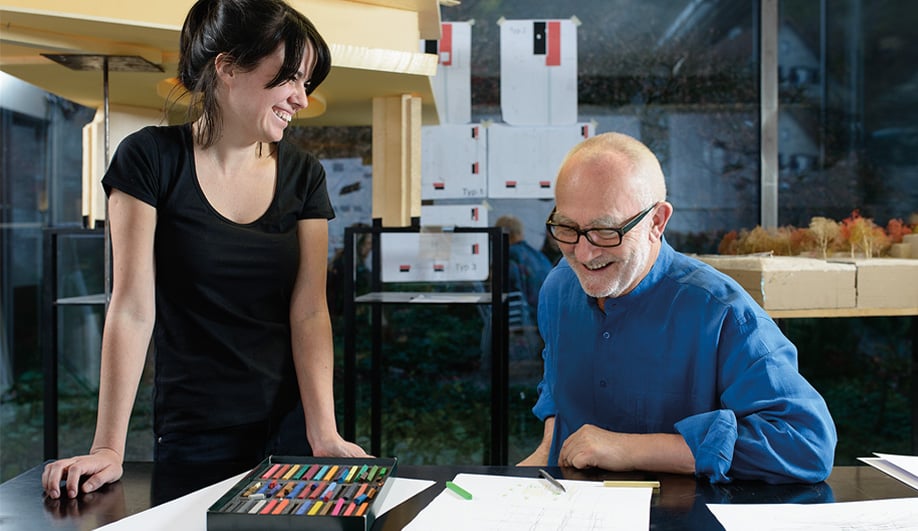 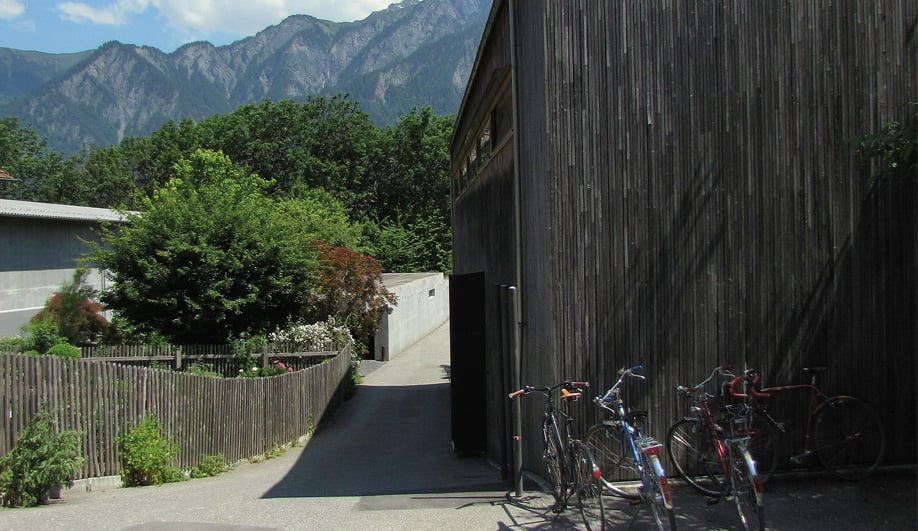 The studio is locat­ed in Haldenstein, Switzerland, a village of fewer than 1,000 people. 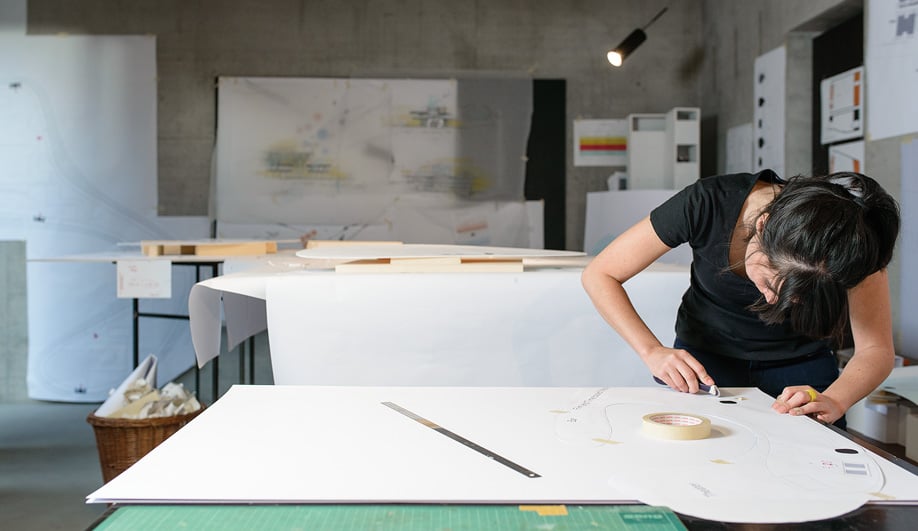 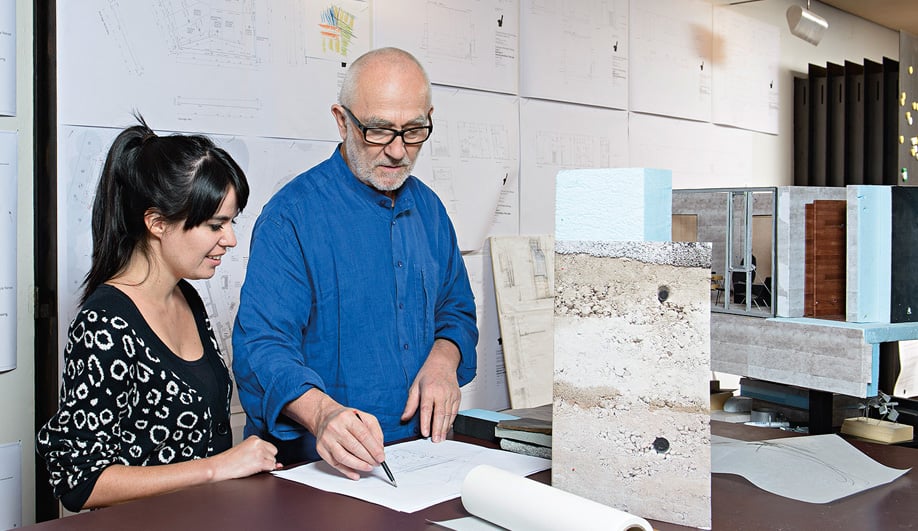 The one-year internship was spon­sored by the annual Rolex Mentor and Protégé Arts Initiative, which matches top cultural figures with budding international talents. 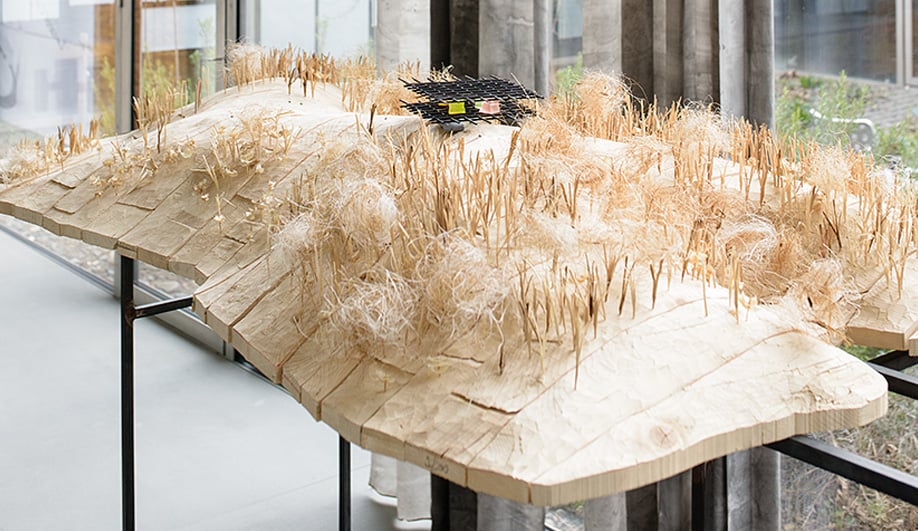 A maquette of a South Korean tea house, now under way in the studio.

Spending time with the architect and Pritzker laureate, as he nurtures new architecture talent for the Rolex Mentor and Protégé Arts Initiative.

From Zurich, it’s two hours by train to Chur, first along the cottage-lined lakeshore, then through the Glarus Alps, which top out at 3,600 metres. Driving a further 10 minutes over the Rhine to the village of Haldenstein, we overtake fresh-faced cyclists in harem pants and topknots. I realize, as they pull up behind us at Peter Zumthor’s grey timber home and studio, that they are part of the family here, interns who arrive each year at this remote location from around the world to help the Pritzker Prize-winning architect execute his often-quiet, low-slung structures.

The name Zumthor is often preceded by “recluse,” denoting a man who works slowly, with years between masterpieces, and rarely far from central Europe. But the man who emerges from a dim concrete corridor, distributing handshakes and hugs, slight and sober in monochrome linen to match his salt-and-pepper brows, is no such thing. At his side, Gloria Cabral, the petite Paraguayan he has taken on as a right hand, is beaming.

Theirs is one of those odd-couple pairings that succeed, brilliantly, despite themselves. Backed by the Rolex Mentor and Protégé Arts Initiative, Zumthor selected Cabral from an international pool of up-and-coming architects to join him for a year in Haldenstein. The timing would overlap with, among other projects, a new commission to design a tea chapel for a Catholic retreat in Namyang, South Korea, a rare venture to the East. When he travelled to Paraguay with Cabral during the program, she spoke no English. Today, at the end of her sojourn, she still hesitates, looking to the only other Spanish speaker for support. Two words she’s sure of, she says, are “refined” and “elegant.”

Happily, “there’s no language needed. I don’t have to explain,” says Zumthor, sounding every bit the cult figure he has become among his devotees. “If Gloria smiles, or doesn’t, I know what she sees. It’s intensive work, and she just knows how to do it.”

Participants from up to a dozen countries collaborate at any given time at Zumthor’s compound, shaping, modifying and sharing experiences until the product is bigger than its constituent nations. The benefit for them is immeasurable: protégés get on-site experience, media exposure and a seat at client meetings. For the Basel-born architect, the advantages are less tangible, but as we hover around a model of the tea chapel in the sunlit courtyard, he speaks about the two-way flow of experience and culture, regardless of language. Even a master can learn and discover.

“This outfit is organized like a farmstead, like an old-style master class,” he says. “I paint the paintings, but I need others to contribute so I’m not alone. They have input, but it’s my painting.”

The tea chapel – like his Kunsthaus Bregenz and Vals thermal baths, great triumphs of light and space – will be a sensory experience verging on the spiritual. It will appear to float atop a hill in the Korean retreat. The latest plan consists of two platforms, whose beauty lies in the repetition of the layered beams, arranged by Cabral following the precise calculations of her mentor. There are no walls between the individual tea cubicles, only slender columns. The timber-grid roof dapples the sunlight like latticework, and as the sun moves so, too, do the light and shadow.

u201cI paint the paintings, but I need others to contribute so Iu2019m not alone,u201d says Zumthor who operates like an old-school master.

“The tea ceremony is a sacred, beautiful form of hospitality, and that was interesting to me,” says Zumthor, who was first asked to build a chapel, period. “I wanted to give it another dimension not constrained to religion.” While touring the National Museum of Korea in Seoul, he noticed in every landscape painting a small outbuilding. “What’s this place?” he asked the curator again and again. “This is a tea house,” she replied each time.

Zumthor’s approach is more experiential, Cabral says, than Gabinete de Arquitectura, the experimental practice she runs in Asunción with Solanito Benítez and Solano Benítez, social activists who use modern architecture to help bridge the socio-economic divisions in their country.

“Architecture is 10 per cent talent, 90 per cent work,” says Zumthor. “Each project deals with a new psychological and social situation. Gloria sees how I deal with it, and when she builds according to that, the project evolves. The design comes out of the construction.”

“Pe-tah?…Pe-tah?” Zumthor smiles and slackens. His granddaughter toddles out of the house for a hug. It’s time for lunch. Annalisa, his wife and true right hand, follows with their daughter. The interns break away from their screens. The scene resembles a family celebration of which we’re all a part. Cabral says, “From the start, I felt like one of the team. I couldn’t have been myself if I hadn’t felt that way.” And now, one year later? “I feel bigger. This program is just the beginning.” ­