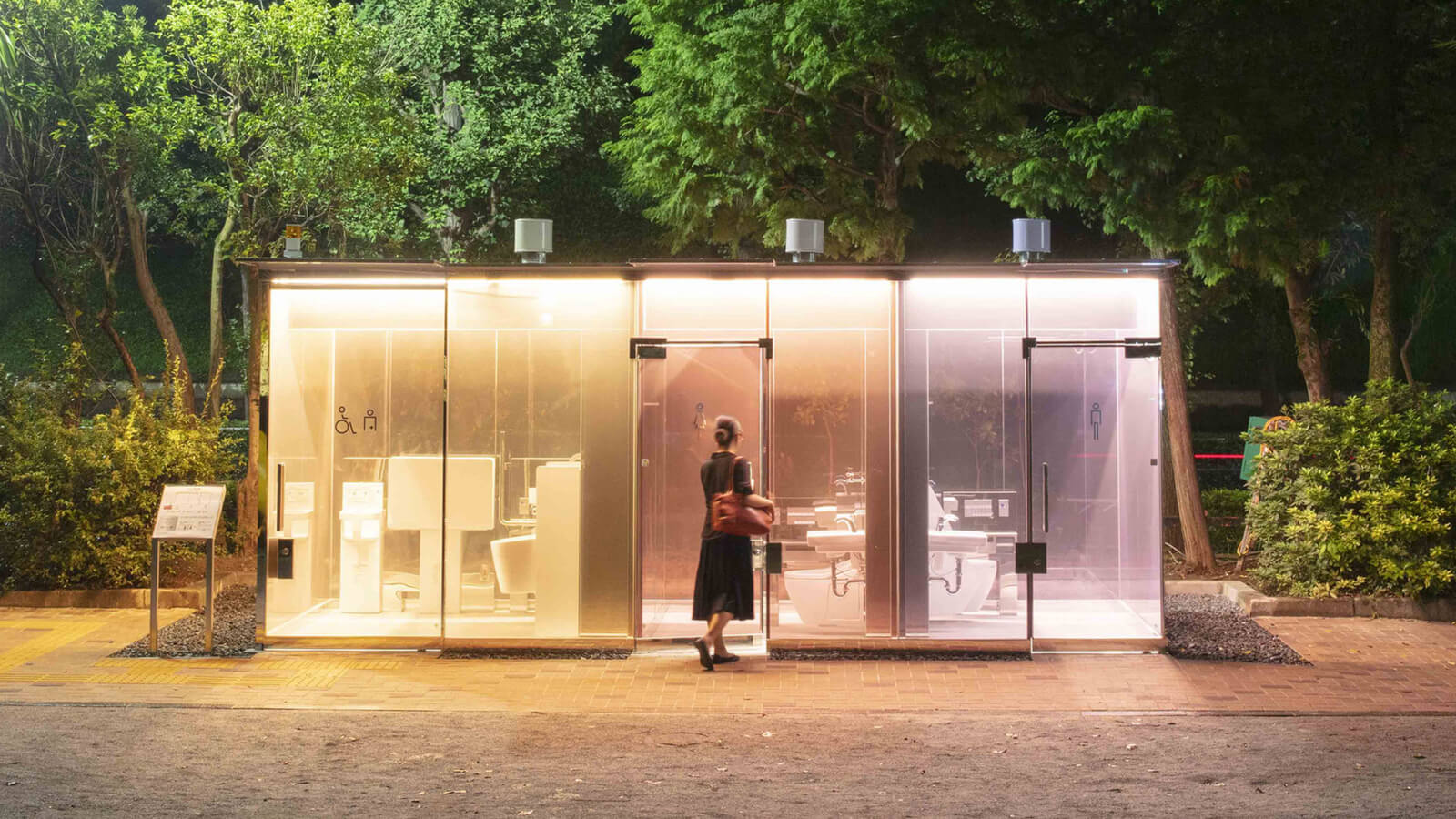 “Everybody poops.” Or so says the almost-canonical children’s book. And, too, everybody pees. Not only does everyone pee, but everyone has a right to pee. From park pavilions and sprawling mall interiors to the depths of subway stations, public washrooms have provided countless individuals (myself included) much needed space to relieve themselves. As the COVID-19 pandemic forced numerous structures to close their doors, these environments, too, fell victim to lockdown measures; in turn, they stranded the many communities who rely on their facilities for both health and safety.

“Looking at the people walking through the streets,” says Shibuya’s mayor Ken Hasebe, “you notice that the city attracts a diverse group of people, including the elderly, people with disabilities, people with children, sexual minorities, and people with foreign roots.” Hence inclusivity is central to the project, with an eye to age, access, culture, gender and sexuality shaping these crucial new public spaces. As Hasebe summarizes, the initiative aims to “build public toilets that can be used safely and comfortably by a wide variety of people” and “turn differences into strengths.”

The new lavatories — designed by the likes of Pritzker Prizer winners Tadao Ando, Shigeru Ban and Fumihiko Maki, to name a few — were meant to be launched concurrently with the highly anticipated 2020 Summer Olympics, which have been delayed due to the COVID-19 pandemic. The full range of loos will now be fully completed by July 2021 (the new date of the Games). Take a peek (emphasis on the pee) at the five unveiled so far: 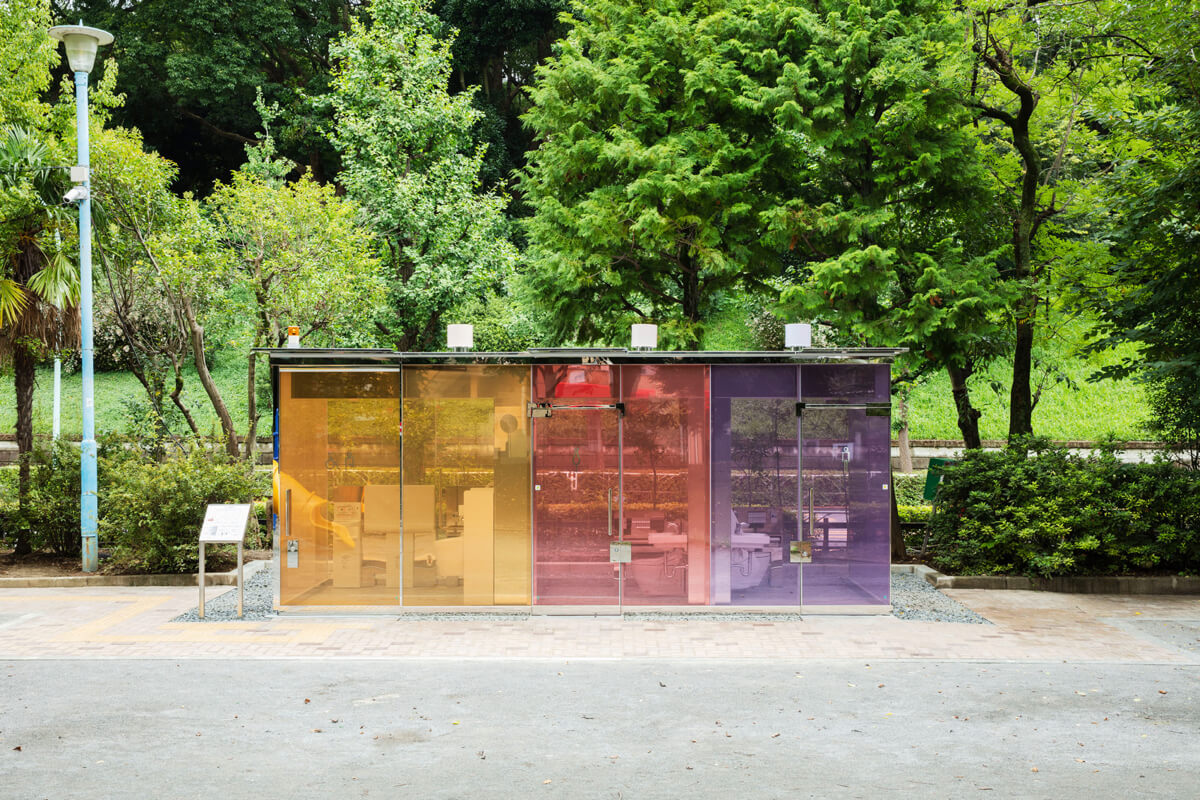 Renowned for his rapidly deployable structures and mass timber construction, award-winning architect Shigeru Ban has designed a near-transparent lavatory that continues the threads of material exploration across his vast oeuvre. 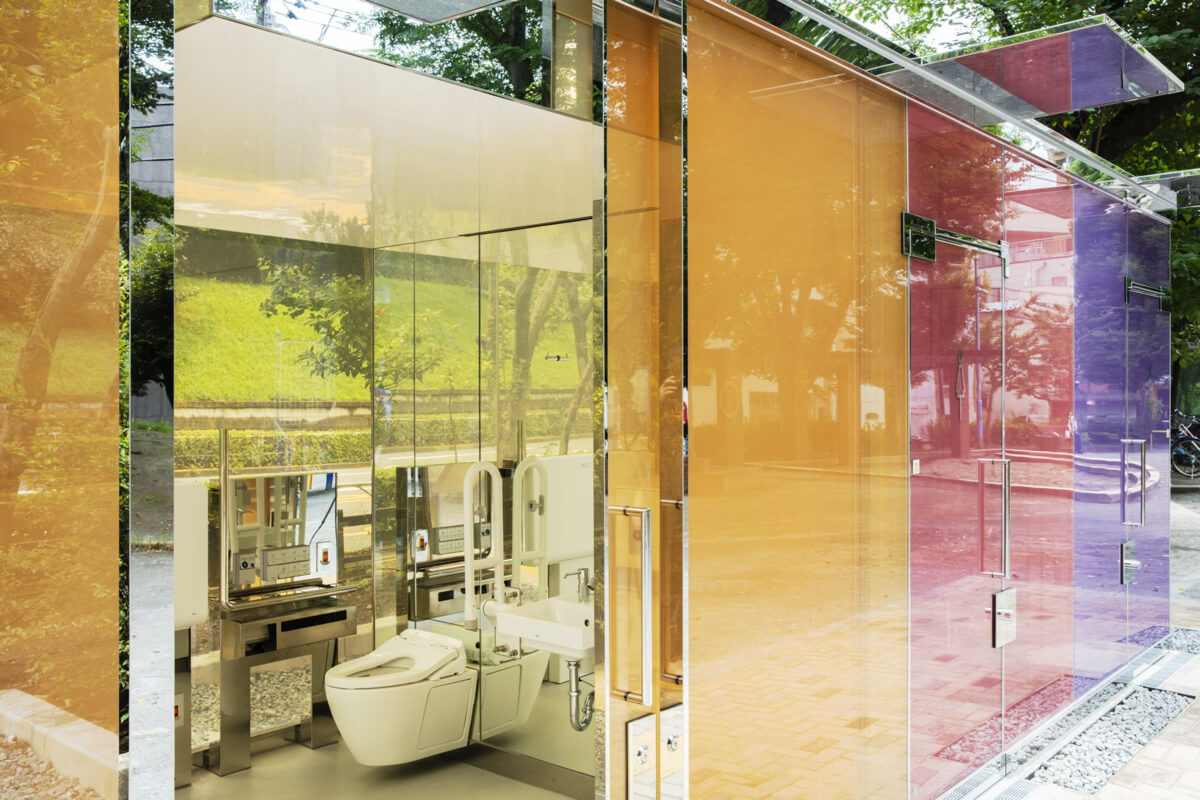 Nestled at the edge of Yoyogi Fukamachi Mini Park in central Shibuya, the coloured glass structure comprises three private toilets for users of the nearby playground and those simply passing through. Each is trimmed in a unique hue — orange for the multi-purpose loo, purple for men’s and pink for women’s. When vacant, the tinted closure appears almost transparent while a flick of the switch when occupied turns the surfaces entirely opaque.

Inside, mirrored finishes create a dazzling infinity effect while retaining views of the roadway and park (perfect for parents who need a little relief while their children play). To ensure equitable access for all, Ban also included coordinated brail pavers leading to the entrance of the multi-purpose room.

After sunset, however, the entire structure illuminates thanks to integrated lighting concealed along the roofline, transforming the washroom into a glowing, gem-like beacon. 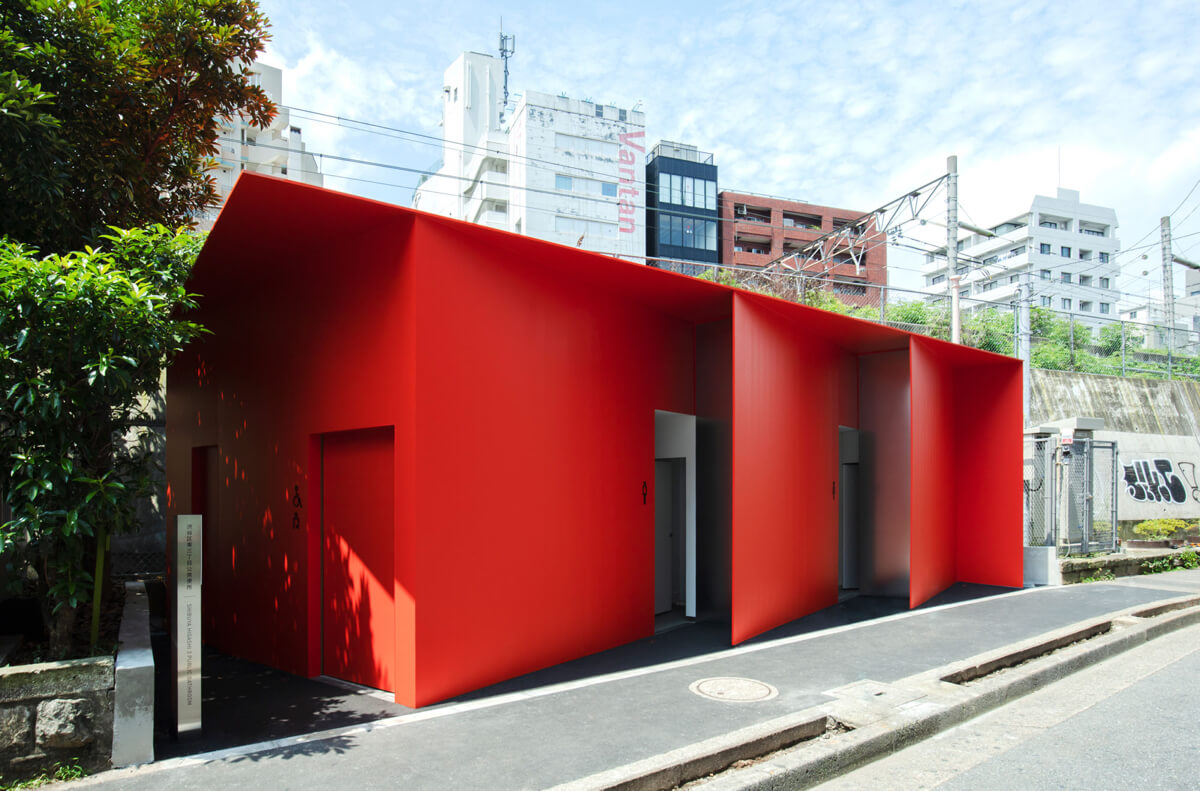 Product designer Nao Tamura‘s inspiration for her bright-red pavilion came from a surprisingly quotidian place: her collective experiences living and working between New York and Tokyo. Drawing from the challenges faced by the latter city’s queer and gender-variant community alongside the traditional Japanese practice of Origata (a decorative method of paper folding used for gift giving), her triangular loo features three jagged fins that wrap and buffer the structure from the bustling street and nearby railway track. All this while providing much-needed privacy for the many communities that will use the facility.

“As a woman, I don’t believe that I am the only one who feels some sense of fear or discomfort when entering an outdoor public bathroom,” Tamura says. “Especially at night, and alone, where anyone could possibly walk in.” 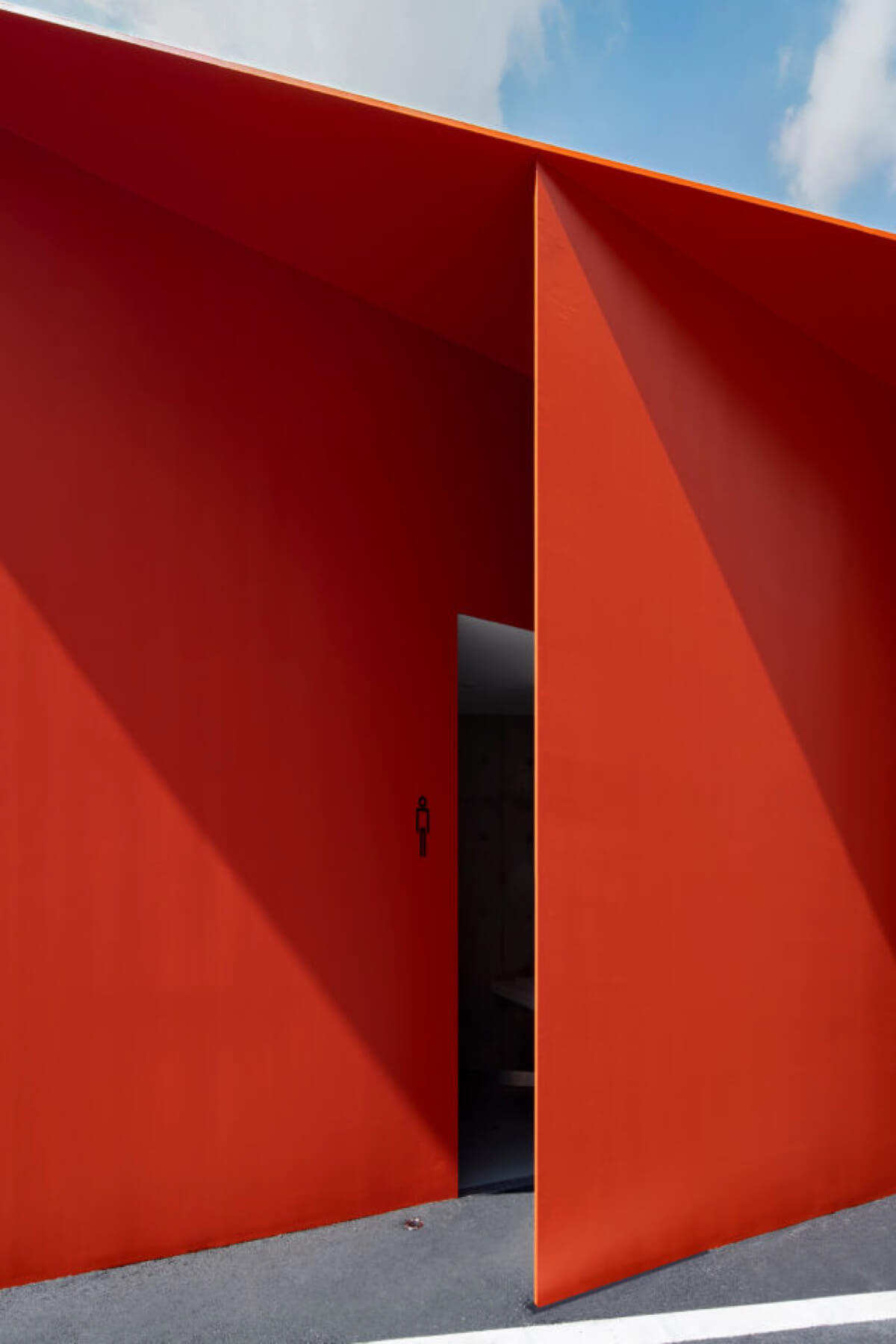 Translating the paper planes of Origata into a graphic surface of plated steel, the men’s, women’s and multi-purpose facilities envelop visitors in a feeling of safety. “I realized that what enables each user a comfortable experience,” says Tamura, “boils down to safety, privacy and urgency.” 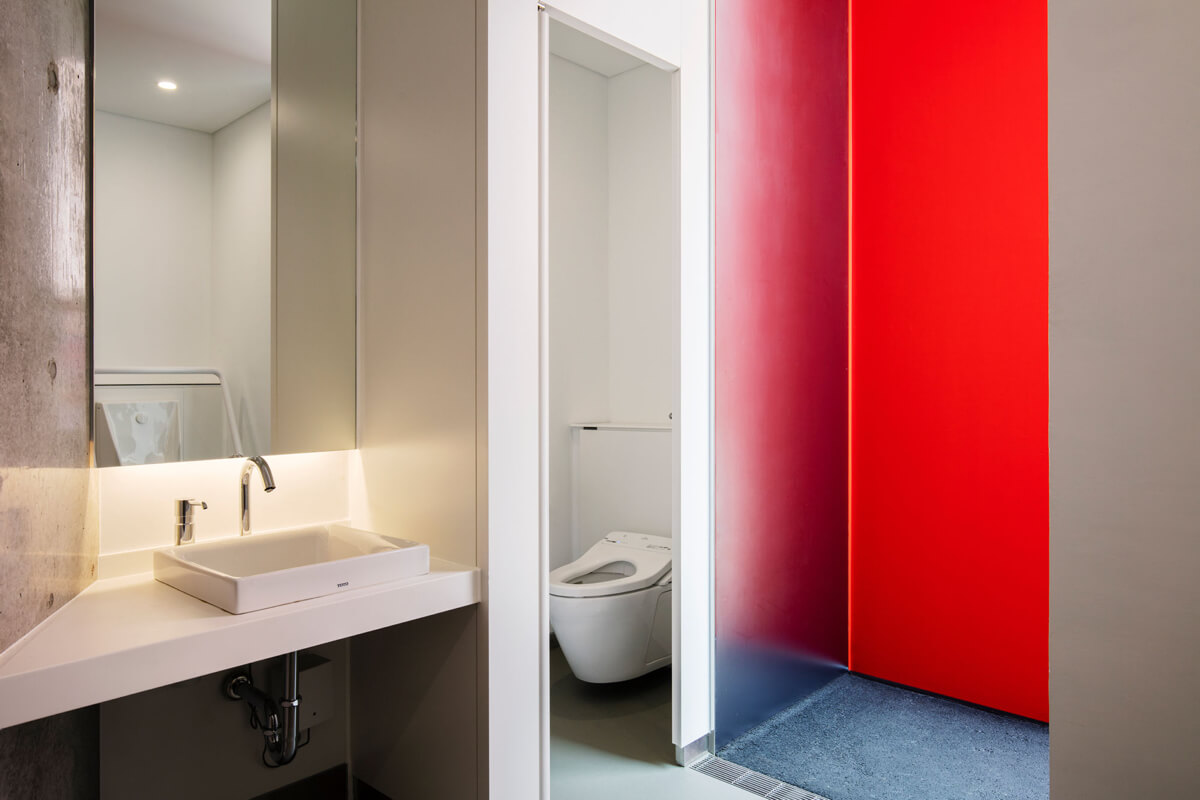 With this bold urban icon — fitted with enclosed lockable washrooms and separate vanities, both effortlessly concealed by a dramatic entrance — she delivers. 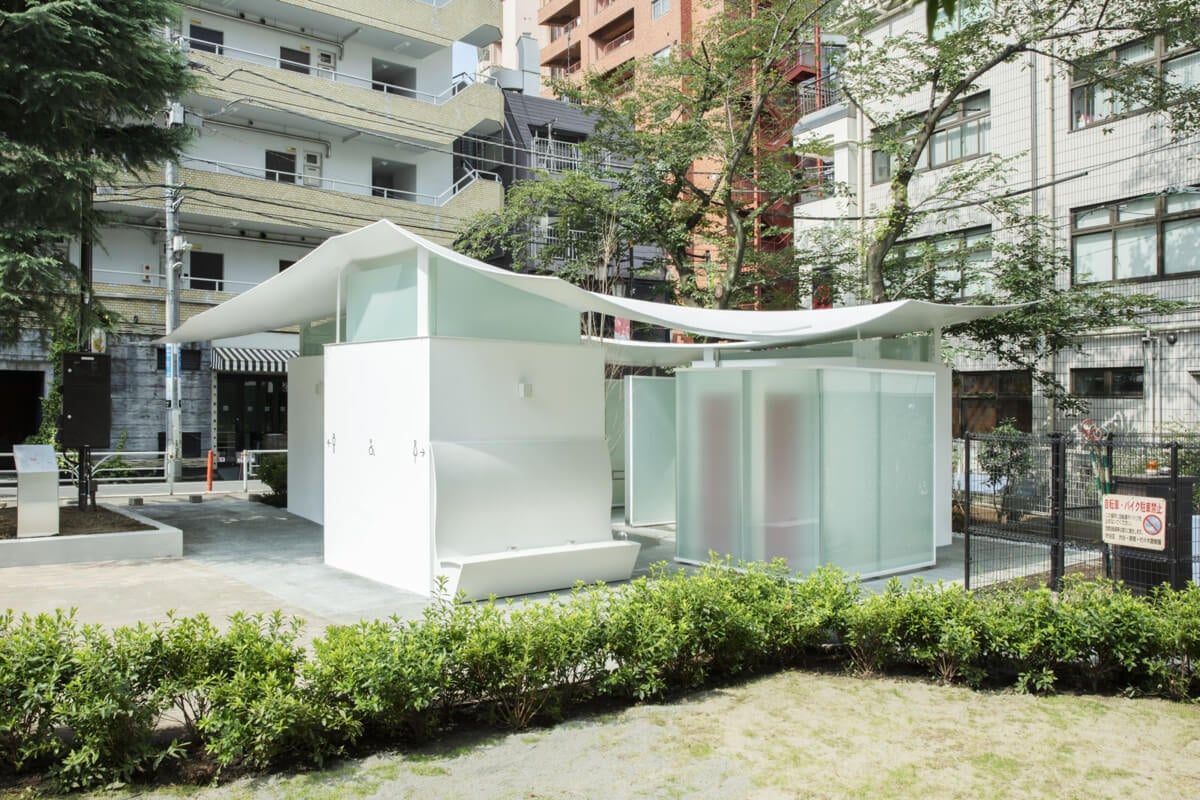 Fumihiko Maki is no stranger to crafting unique landmarks — take his sombre and evocative Aga Khan Museum in Toronto, for instance. At the popular neighbourhood locale Ebisu East Park in Shibuya, the legendary architect (now in his early 90s) opted for a more humble edifice. 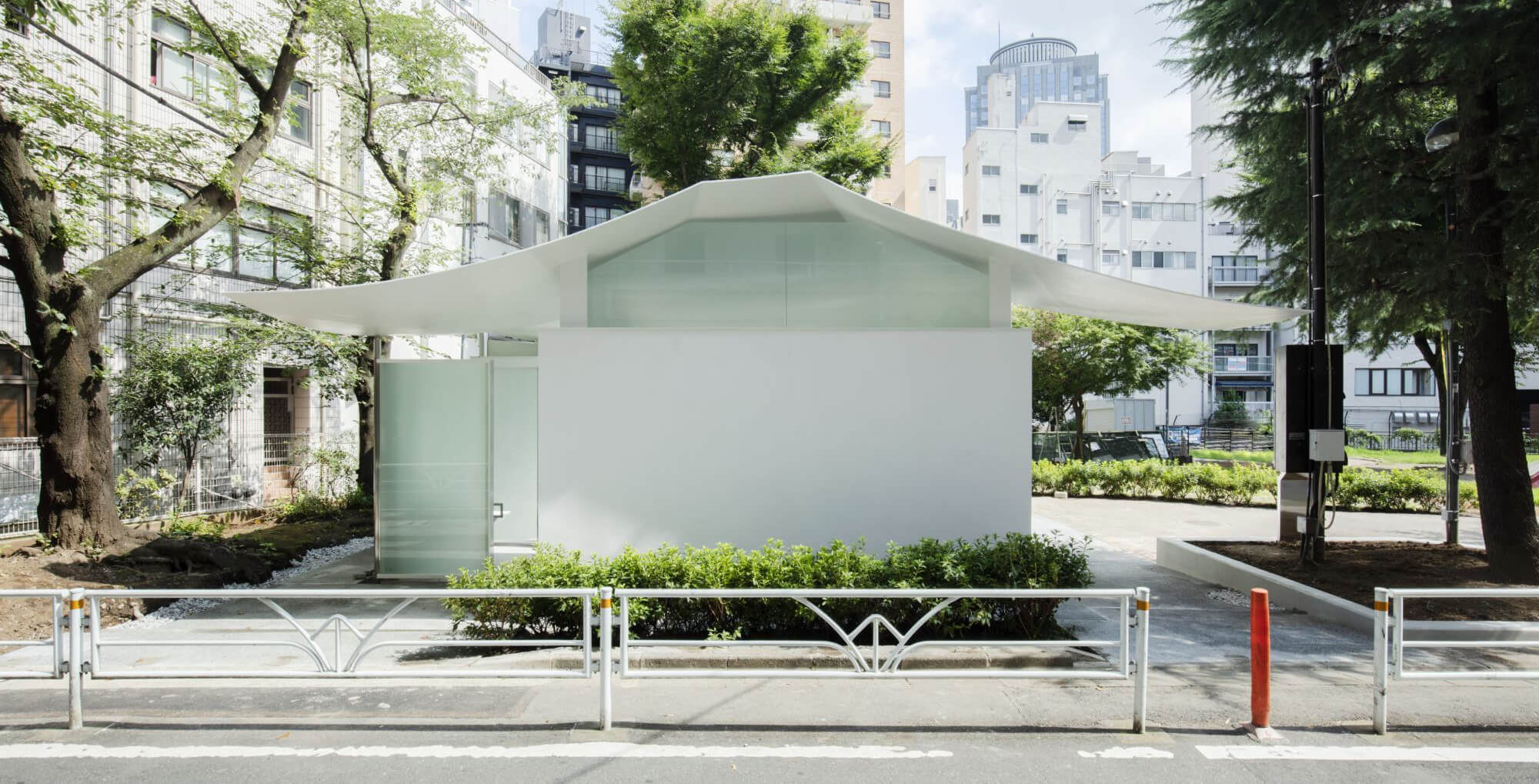 For the site, colloquially dubbed “Octopus Park” due to a nearby piece of playground equipment in the visage of the creature, Maki’s lavatory riffs on this aquatic inspiration. A graceful canopy folds over four pavilions — three dedicated to individual lavatories, while the last frames a wash stand — that alternate in transparency from crisp, opaque white to frosted glass. Maki’s distinct restraint is carried through within. Monochromatic fixtures, fitting and materials creating a white-out effect as light washes in from clerestory windows. 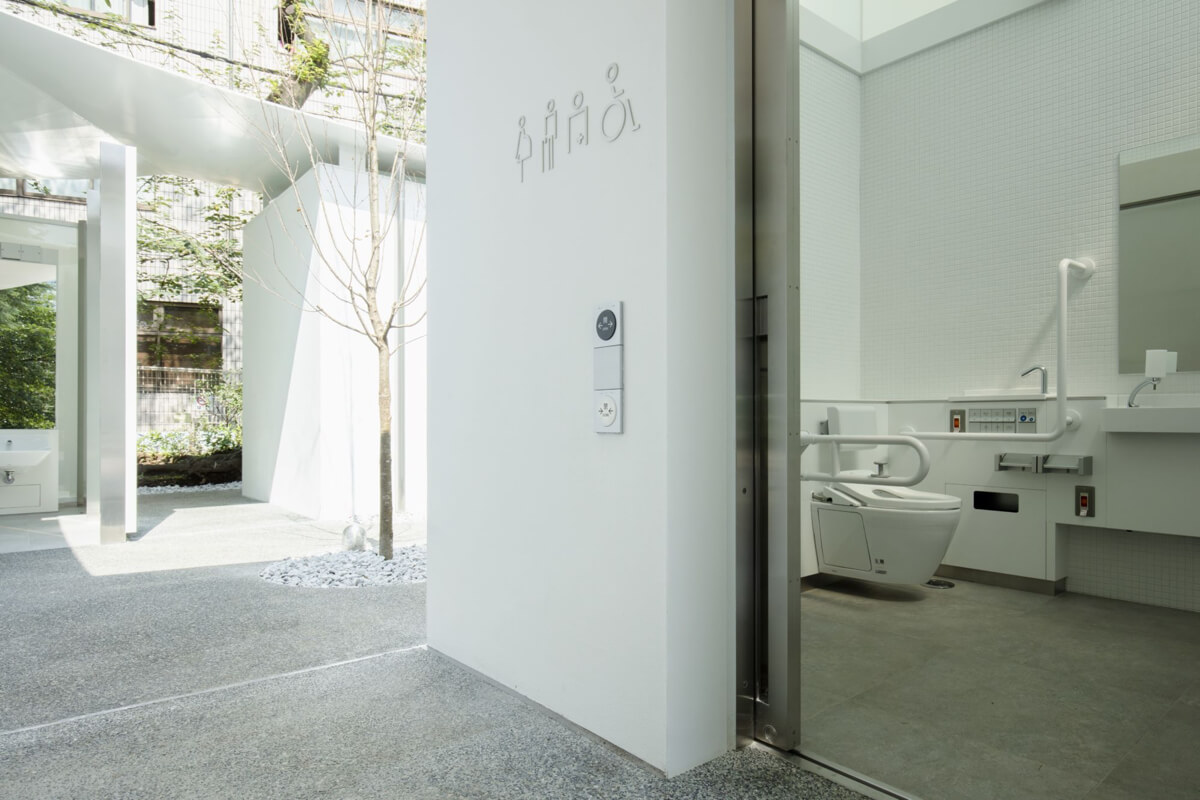 “We wanted this facility to function not only as a public restroom,” says the architect, “but as a public space that serves as a park pavilion equipped with a rest area.” To that end, one of the refined masses has an integrated bench lining its exterior, inviting guests to take a seat while waiting for a vacancy. Finally, a small tree is situated at the heart of the washroom courtyard or “decentralized layout,” further bridging the new structure with the green space beyond. 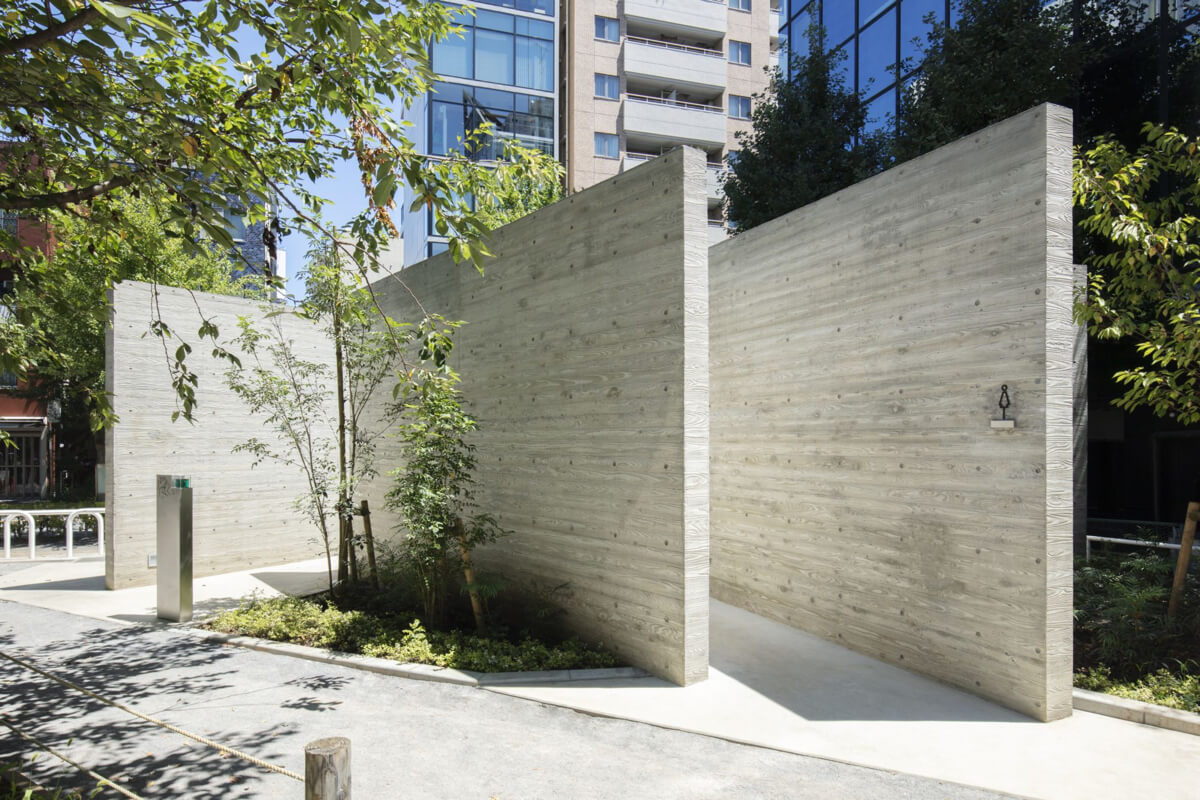 Patterned with the remnants of wood formwork and metal reinforcements, the washroom pavilion appears as “an object that stands casually in the park,” according to Katayama. At night, its radiating fins are animated by a vertical strop of light that emphasizes its platonic and elemental forms. And, like its siblings, it features a dedicated men’s, women’s and unisex toilet in its fortress-like scheme. 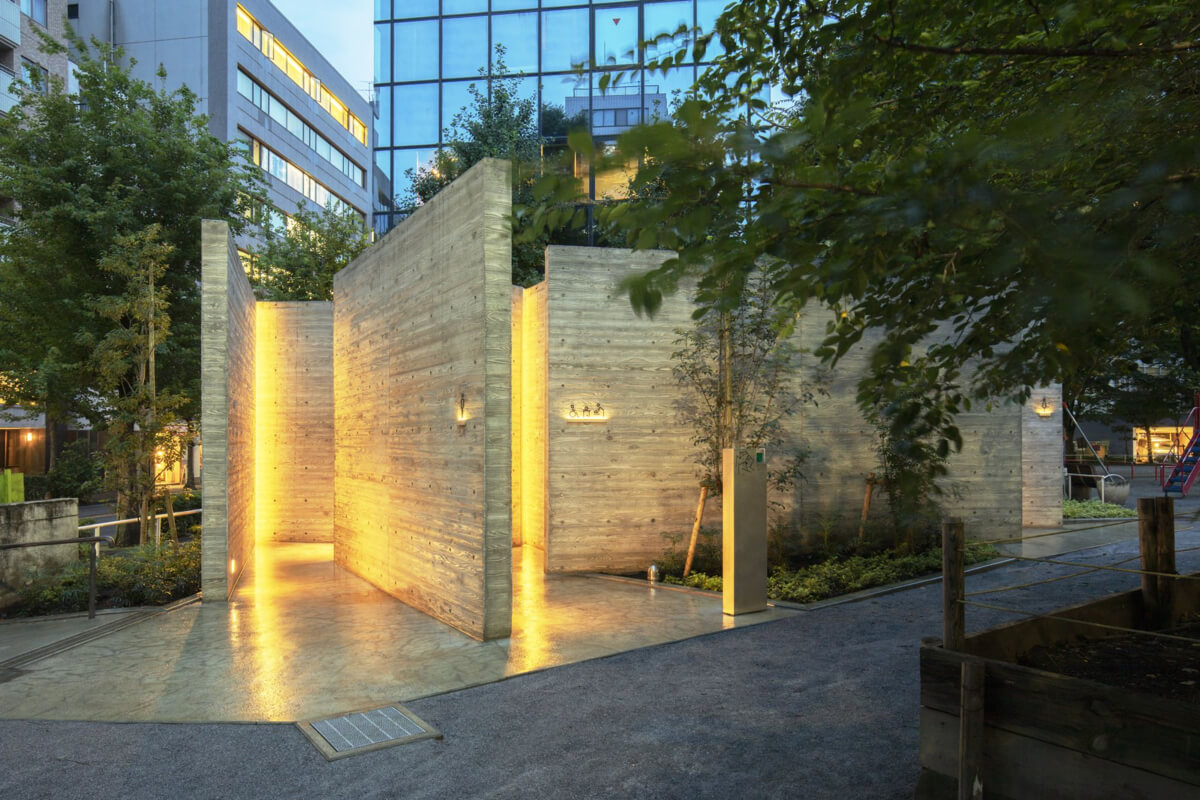 “The design,” he concludes, “creates a unique relationship in which users are invited to interact with the facility as if they are playing with a curious piece of playground equipment.” With this austere and deeply meditative offering, Katayama nonetheless embeds a certain sense of charm with every flush. 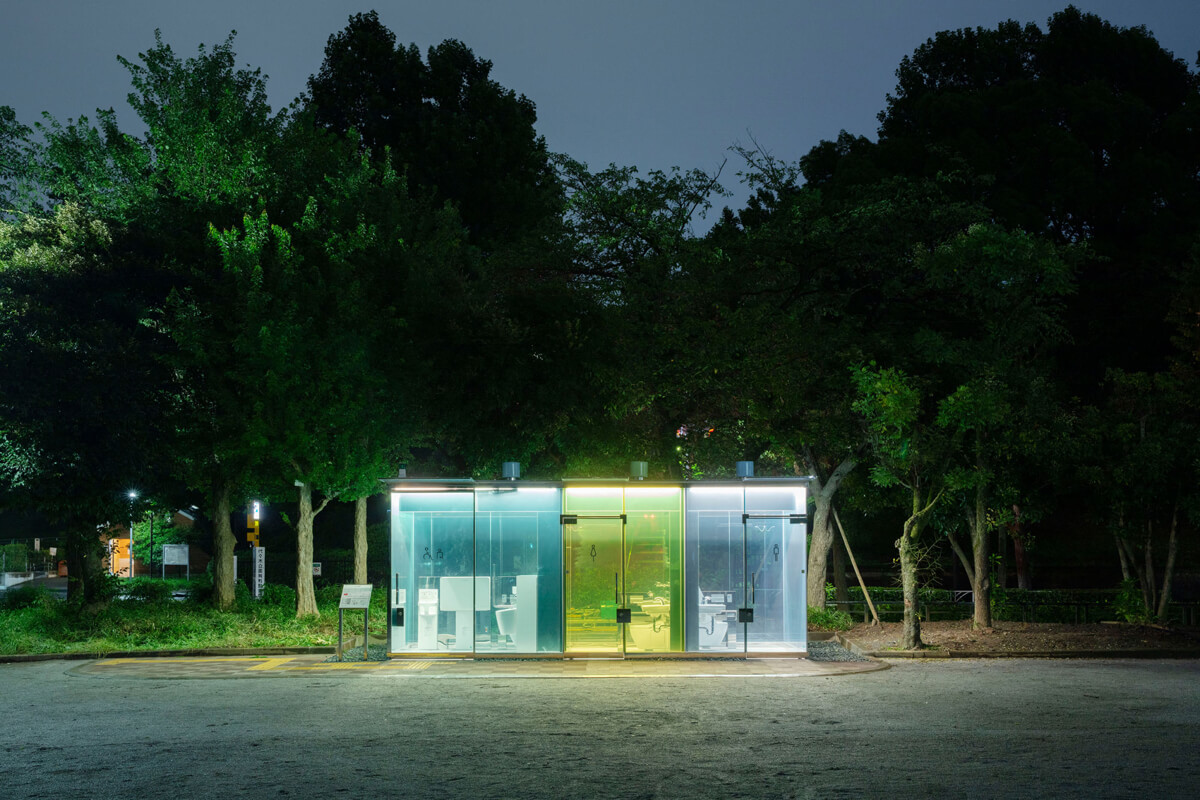 For his second vibrant design, Ban further plays with the innate properties of glass. According to the architect, there are two central concerns for anyone using a public toilet: “The first is cleanliness,” says Ban, “and the second is whether anyone is inside.”

Like its sister facility only two blocks south, the new structure in Haru No-Ogawa Community Park embraces the latest technology to shift from translucent to opaque once occupied, allowing passersby to see if the loo is currently in use and for city maintenance to easily check if the site could use a scrubbing. 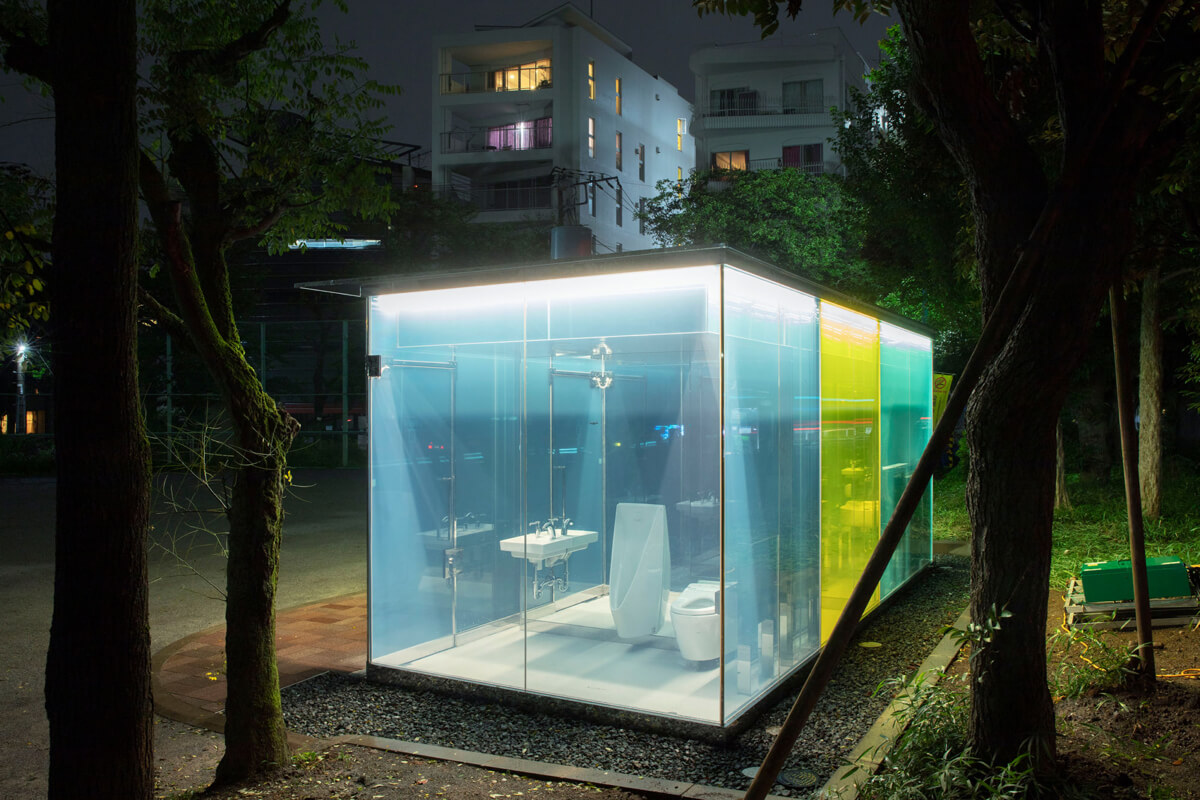 Though the washroom may appear slightly futuristic when contrasted with its lush setting, the pavilion is nonetheless a nod to Japanese culture. “At night, the facility lights up the park like a beautiful lantern,” explains Ban. Rarely do public washrooms relay such careful execution. And, even rarer, such poetic intentions.