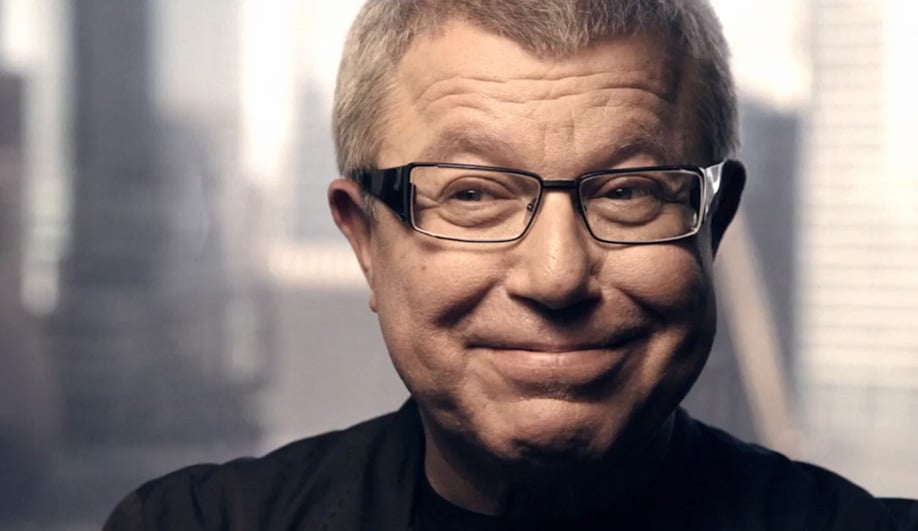 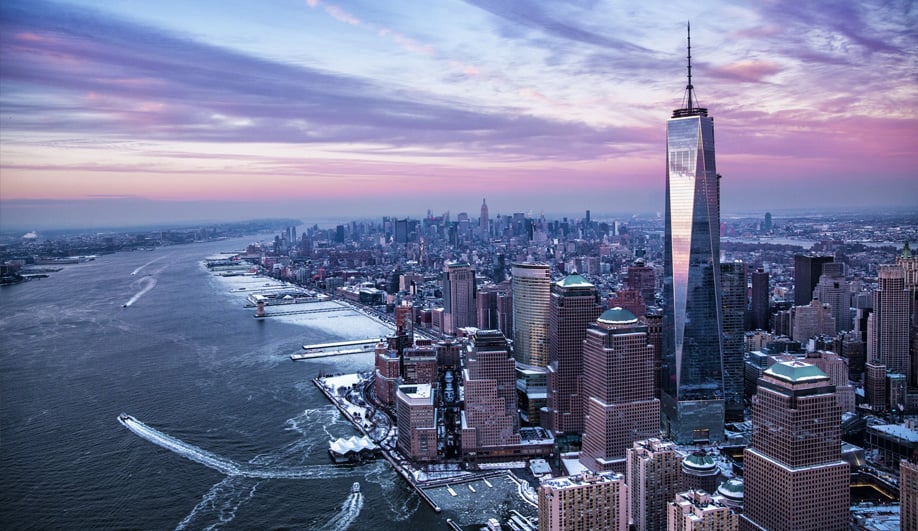 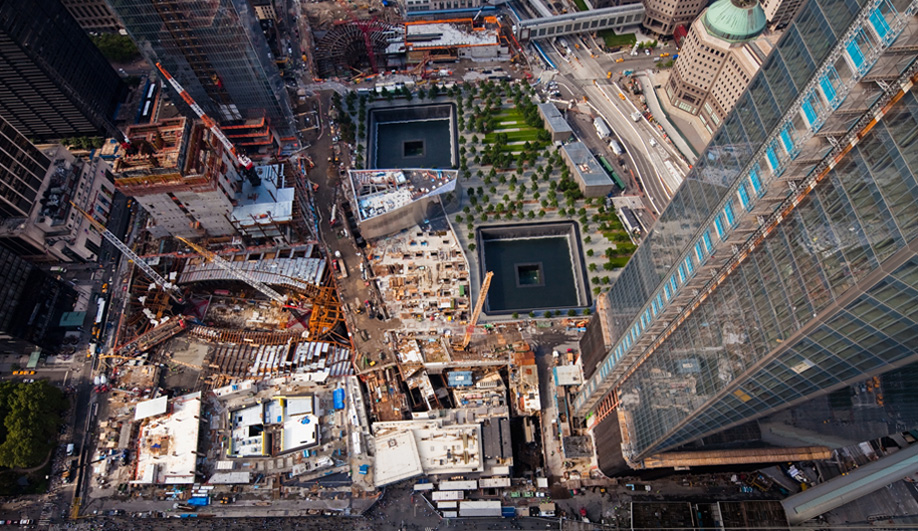 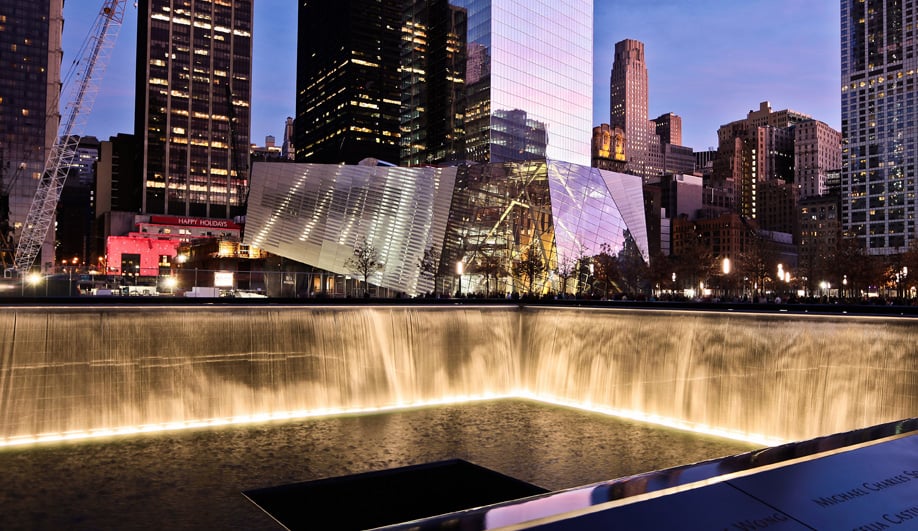 In December 2014, Daniel Libeskind sat down with Azure editor Catherine Osborne for a talk hosted by IIDEXCanada. His engaging and philosophical conversation covered the gamut, from revitalizing lower Manhattan – from a disaster zone to a thriving family neighbourhood – to why Mozart and Herman Melville are among his biggest inspirations.

On being the master of Ground Zero’s master plan
I was a musician in my former life and I came to music because I was interested in how a composer composes a score, it is very precise. Every rhythm and every note has to be considered precisely. It’s like a drawing, where every line, every geometry, and every height is exact. Yet, at the same time you don’t see the composer on stage along with the cellists and the violinists. He’s conducting and his back is turned to the audience. That’s very similar to a master planner’s role, though the orchestra is comprised of hundreds, sometimes thousands, of musicians. You give them a score that is a very precise thing, but like a great musical score there is leeway for interpretation.

You have to give a sense of openness as well as a certain precision that marks the exact idea of a community, or of the memorial, or of the structure. I think of it more like a marathon than a short race – it’s not about aesthetics, it’s a technical attitude. I don’t think architecture should be done by committee. Someone has to be able to sign off on the plan. To me, this is the great classical process.

On working on grand-scale collaborations
With each project you have to do two things: one, you have to listen carefully to what is desired. Then, you have to be very clear about your own ideas, and how to translate that. Working in a democracy is not like working in some kind of dictatorship, because you have to garner consensus among many different stakeholders. You are not alone. With the World Trade Centre master plan, there is the governor of New York and the governor of New Jersey; there is the Port Authority that owns the land and leases it out; there is the mayor of New York, there are the transit authorities…. And, of course, there are the families of the victims, who are the greatest stakeholders. This is how democracy works. Churchill was right when he said democracy is the most difficult political system there is, but it is also the best. You have to forge a consensus, and at the same time deliver something that speaks to what you want to do. That’s the civic part of architecture.

On the World Trade Center’s progress
It’s still a construction site but already you can see the memorial, as it was planned with the waterfalls by Michael Arad, which was part of my plan. You’ll see the museum and the slurry wall and the power of that original foundation. You’ll see the 1,776-foot-high spire of Tower One; you can see Tower 4 and the station. You’ll also see that 70,000 people have moved into the lower Manhattan area. It’s a city reborn. Even before 9/11 this area was a dead-zone at night with empty streets. So, there has been a complete revival. Office buildings are now incorporating residential units and there are families moving in. If we need proof of what you can do to revive a city, this is it.

On the personal significance of WTC
I grew up in the Bronx and my family worked in sweatshops, basically. When I won the competition I said, you know, only a lucky few who live in New York will ever be in those new towers. My objective was to create a place for people. When they go to work or get on the train or walk around, there is something for them. Yes, the towers are beautiful, but that isn’t the most important thing to me. To me it is the public spaces that give the plan three dimensions…. on the street, in the skies, underground. It is ultimately for the people of New York, not just for those who are looking at a skyscraper as an aesthetic composition.

On building a monument in Ottawa for Holocaust survivors
I don’t believe a memorial is simply a sculpture or a plaque. It must have a riveting and emotional feeling connected to it. And it has be current. The Holocaust really isn’t in the past, there are still genocides happening. Canada is a democratic country and with a history that is very different from Europe’s, so I looked at the Holocaust from the perspective that it was much more than the six-point star that the Jews were murdered with. It was also the triangles that homosexuals wore, for instance. People who were not able to walk or weren’t healthy were also murdered, as were all sorts of free thinkers and socialists. We are all part of the Holocaust. So I based the memorial on something new, that isn’t the general idea of the slaughter of millions of Jews.

There is an ascending plane in its design that leads visitors upward to a view that looks toward the national Parliament Buildings. I did this because the decisions that allowed the Holocaust to happen were based on the decisions of the government. For me that is the final view, it’s a summation of what a democratic government is and what it can do. So it’s not a statement, it’s an experience. Without that experience it would just be an aesthetic… thing.

On having a signature style
I wouldn’t call it a style; I would call it a physiognomy. It’s like Mozart’s music – it has many notes. You have to be yourself. It’s a language and it’s how one speaks. If someone forced me do some sort of sleek curve I would die. Really, I don’t understand how anyone can do a sleek curve. For me, it is impossible.

On the state of architecture today
You can build any nonsense that you want. We have the technology to translate algorithms that can translate any form in nature. But as an architect you have to work in a way that isn’t like a system. Technology is a tool you have to master just as a Japanese calligrapher has to master the brush. It’s a means to an end. I never let my buildings reflect the tools I use. Many people do, they make buildings look like rocket ships.

But a building should relate to a human being. Interestingly, while the world has changed in every way, geographically, politically… how we live really hasn’t changed from how we lived 10,000 years ago. I bet even Stephen Hawking lives in a house with a peaked roof. It’s perplexing to me that the world changes so quickly but architecture moves so slow. I have an answer to why that is: because architecture is not amendable to manipulation. Architecture isn’t a commodity because it has a spiritual validity to it. That’s a different way of looking at architecture other than simply as an object.

On the importance of time, strength, cash and patience
Herman Melville said that in Moby Dick. There is this interesting passage where he is describing whaling and he says, what you need is time, strength, cash and patience. I thought a lot about this because when Melville died, the New York Times obituary was one sentence long, something like… “an obscure writer who works in the customs department died.” I thought about that quote and that you need those four things, and in that order. First of all, without time you can’t do anything; you need five years to become an artist or a musician or a scientist. The five-year plan. Strength, because if you are weak, you aren’t going to be able to do it. Then, you need money for the lessons, for instance, or to buy the piano. And, most important, and why Melville put it as the last one: you need patience. You don’t have to be successful right now; you need time. Take the long look, not the short one. So that’s genius to me. That’s what I learned from Melville. He is a true master.