In Conversation with Jacques Herzog
After nearly a decade of construction, Herzog & de Meuron's Elbphilharmonie in Hamburg is now open. Jacques Herzog, founding partner of the Swiss firm, talked to Azure about the building and how it fits within the firm’s canon, both present and future.

After nearly a decade of construction, Herzog & de Meuron‘s Elbphilharmonie in Hamburg is now open. Jacques Herzog, founding partner of the Swiss firm, talked to Azure about the building and how it fits within the firm’s canon, both present and future.

The Elbphilharmonie‘s interior is as impressive as its facade of more than 1,000 massive slumped-glass panes. Three performance spaces – one equipped with a 4,765-pipe organ – offer a world-class concert experience. But the process of transforming a warehouse on a working harbour into a state-of-the-art venue was not without its pitfalls. Cost overruns placed the project under international scrutiny for years. We talked to Jacques Herzog about the process and the final product.

Your earliest buildings are known for their striking forms and material choices. But recent projects offer more complex experiments with space. Has there been a change in how you approach design?
Critics tend to put you in a drawer. Of course we became known through our different approach to materials, and for giving back an archaic physical form to architecture. At the beginning, we produced more box-like objects, but we were always interested in merging the structure, the materials and the space into a unit.

Our approach became more obvious in later projects because they were bigger and more prominent. Especially evident is the Prada store in Tokyo (2003), which is a total integration of ornamentation, structure, material and space. It is literally one thing: whatever is physical is structure, is space-making and is ornament. 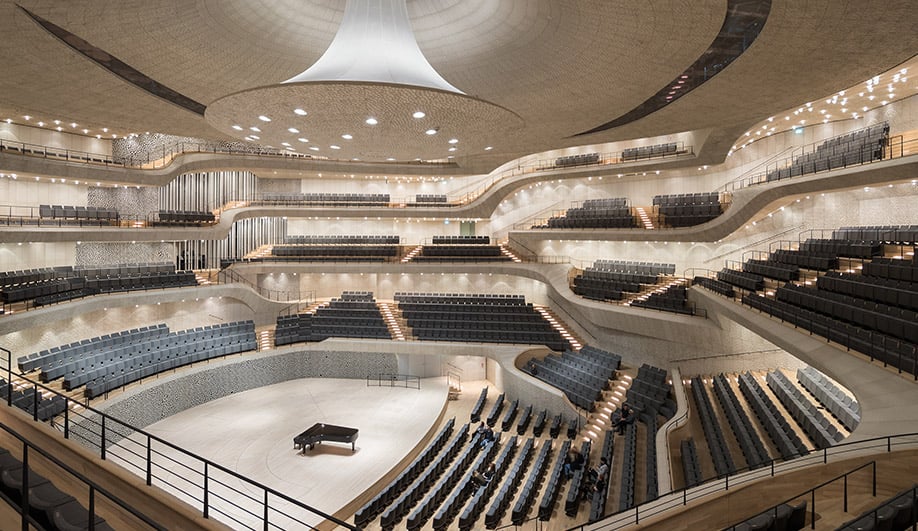 The firm compares the 2,100-seat Grand Hall, with its central peak, to a tent. The ceiling and walls are finished with engineered gypsum fibre panels sculpted into a scalloped pattern that scatters sound waves for superior acoustics. The organ was designed by Johannes Klais Orgelbau of Bonn; some of the largest of the organu2019s 4,765 pipes (visible at centre-left) are placed where guests can walk alongside, and even touch them. The entire hall is structurally decoupled from the rest of the building for added soundproofing.

Is the Elbphilharmonie your masterpiece?
I am reluctant to judge our own buildings. I hear that people like it, and that’s good, because it gives us the opportunity to do more projects. But I honestly don’t care about these categories. I cannot see it from that point of view. Not to sound modest, but when you finish a project, you are too close to be objective. It’s like a love affair: only after you step away from a person who was so close can you see them in a different light.

The ups and downs of the Elbphilharmonie project are part of its story. How do you keep focused over such a long period of development and construction?
Architecture is not a fast thing, like fashion or other fields that are more dependent on trends. What is a bit different about the Elbphilharmonie is that it took even longer than a normal project – about 15 years. It had some dramatic moments, but these did not really impact the design. The concept of a more expressive crystal on top of an earthy, archaic block of brick warehouse – that idea was conceived the very first day.

What effect did such intense public scrutiny have on the architecture?
The most interesting thing about the Elbphilharmonie is that it came from the bottom up, rather than from the top down; it didn’t start with some mighty mayor who was overly ambitious. There was a proposal for a normal commercial development – a tower with some artist lofts.

The developer came to Basel and asked, why don’t we include a concert hall in the warehouse, instead of this boring commercial project? We made a sketch for the concept, and from that the developer hired us. When the sketch went to the media, the image was so seductive that there was a lot of hype. People wanted it. So the Elbphilharmonie happened through the people of Hamburg. 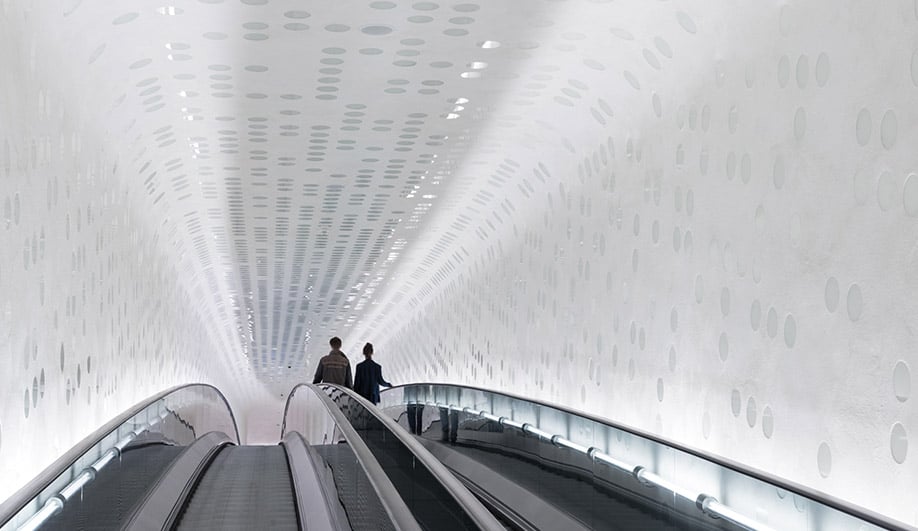 An 82-metre-long escalator takes visitors to the rooftop. The ride up was kept deliberately plain, revealing little of the buildingu2019s structure until the arrival at the top.

Art historians say that Picasso sometimes made paintings in response to the best work of his peers. The Elbphilharmonie seems to deploy elements associated with OMA – the escalator, the sky lobby – but in new ways. Do you watch what your peers are doing?
That sounds fine as an artistic strategy, if its purpose is to push forward a design problem. Our concept for the Elbphilharmonie escalator, though, is driven by a topographic idea rather than a reference to any architecture. It brings people on a ride up from the street without revealing where they will be landing. I don’t know whether that has been done before. On the whole I don’t see our work being directly inspired by references or analogies, but rather by conceptual thinking that opens up new paths for us.

Speaking of art, you’ve designed a new building for the Vancouver Art Gallery, your first Canadian project.
Yes, Vancouver is amazingly located and has a great community of local and internationally acclaimed artists, such as Jeff Wall, whom I’ve known since long before we started work on the museum. He and other artists remain involved in the design process, which is a great support and inspiration for us. The city is not very big, but it’s very lively. It has an almost Swiss character, including a variety of climate conditions and natural topography.

Will it have something to do with visibility? Does Vancouver need a landmark?
There are not that many tall public buildings in Vancouver, and we have proposed a more vertical concept for the museum. We believe it makes sense to give more visibility, especially in this part of downtown, which is less developed. Along with a tall component, we have a low component that addresses the human scale and street life. It will make a larger portion of the city more attractive.

Your buildings are widely known through photographs, such as Iwan Baan’s images of the Beijing National Stadium. What’s the relationship between your design process and the images made of the final building?
Iwan is a good photographer, and his images make the buildings he shoots well known all
over the world. At the same time, though, this is our main criticism of contemporary architecture photography: it is too ubiquitous and it looks too good. Everything looks great. Many people who know certain buildings from photographs have never visited the real places and don’t know the real thing.

Architecture is about the real encounter of real people with real spaces and physical objects. How do they feel? How do they smell? How do they sound? If the real thing doesn’t convince people anymore, architecture will cease to exist. This is not the mistake of photography or a particular photographer or image production as a medium. This is a challenge for all of architecture in an increasingly digitalized society.

Images aside, some of your buildings are among the most visited in the world.
We’ve always believed in making things more open, making things more public, discovering that potential. Tate Modern initiated this – with it, we realized how important it is to do buildings for people, for the millions of visitors who go every year. We had to learn to think about buildings differently.

Without this lesson we could not have produced the 1111 Lincoln Road parking structure in Miami Beach, or the VitraHaus, or, especially, the Bird’s Nest stadium in Beijing, which every day attracts thousands of people who hang out and dance there. The stadium was made for the Olympic Games, but it always interested us more in its post-Olympic function as a public park. Especially now, with the current shift in our culture, it’s important to have buildings that can play such a role in cities. It’s really made for the people. Now, perhaps, Hamburg has a building like that, too, in the Elbphilharmonie.