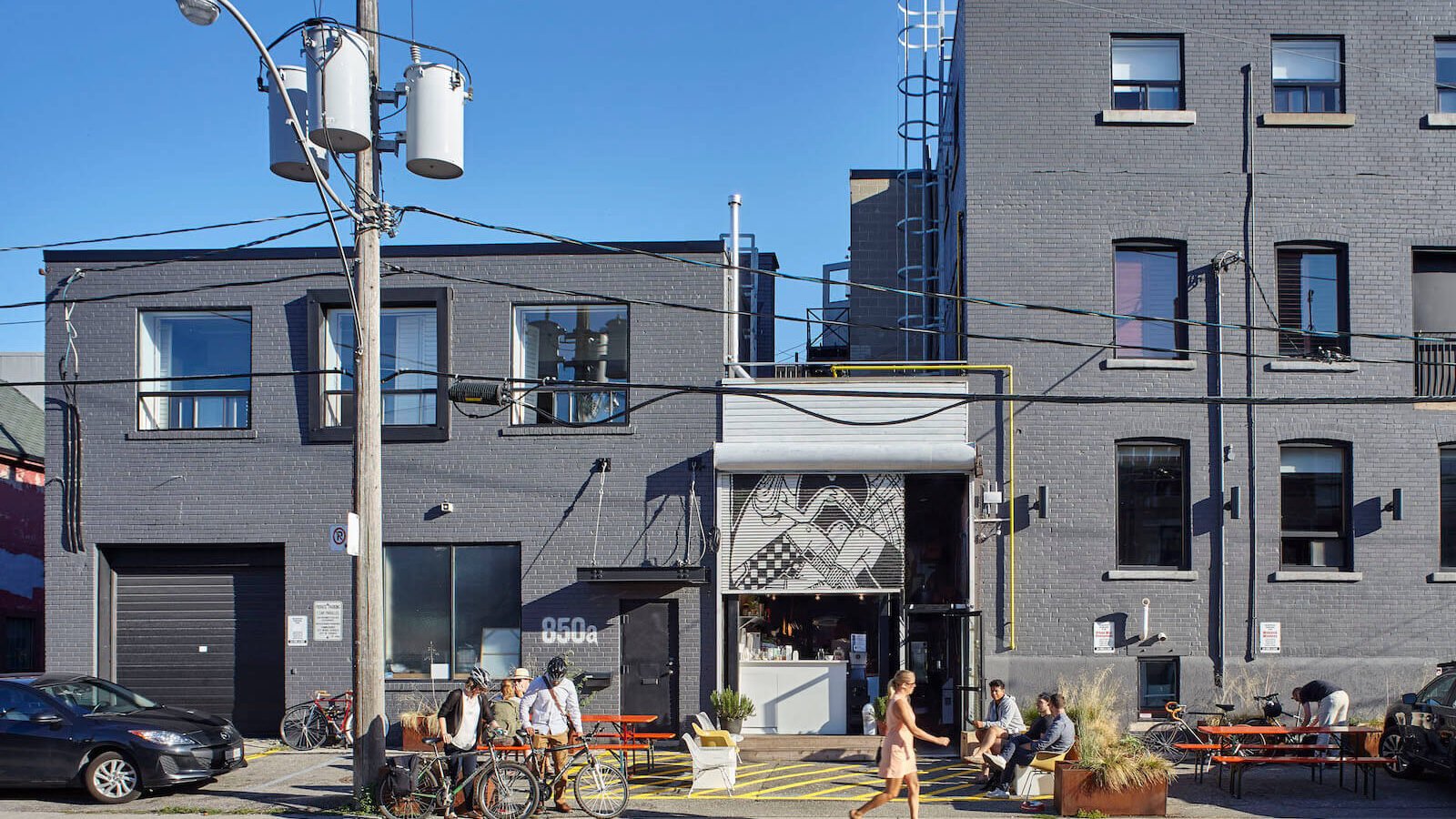 We chat with the founder of Tokyo Smoke and GoodCap Wellness about how he’s bringing design to emerging markets.

These days, Lorne Gertner is still best known as the Godfather of Cannabis – a moniker he earned for founding Tokyo Smoke, the brand he brought to vivid life with an intriguing shipping container shop wedged between two buildings in downtown Toronto, before the drug was legalized for recreational use in Canada. Now, with GoodCap Wellness, he’s venturing into the world of functional mushrooms (the kind you cook or use as a tincture) and psilocybin, which can only be purchased legally with a prescription (it’s still under schedule III of the Controlled Drugs and Substances Act). Once again, he’s at the fore of an emerging market – and bringing creativity into his venture.

But his entrepreneurial streak extends much further back; an architect by training, Gertner has played a major role in numerous design success stories, including architecture firm BDP Quadrangle, fashion label Pink Tartan and Toronto Fashion Week. And since 2012, he and Steven Fong – the architect behind the original Tokyo Smoke – have been teaching a course at the University of Toronto’s Daniels Faculty of Architecture, Landscape, and Design on design and entrepreneurship, encouraging students to use design thinking to envision a business rather than a building. We Zoomed with Gertner to find out more.

With Tokyo Smoke, it’s so interesting how you created a design aesthetic around the brand before cannabis was legal, and carved out a space for it as part of a sophisticated design experience before a lot of people were even thinking that way. How did you come up with the branding and aesthetics?

[The possibility of legal recreational] cannabis was in its early days and I looked at the opportunity for how to create a contemporary brand within all of that. It comes naturally to me; my passion is about making the world a better place through design excellence. When I started Tokyo Smoke as a clothing, coffee and cannabis brand, there wasn’t a precedent. There were emerging dispensaries, but there were no brands. The name Tokyo Smoke was birthed out of things that I loved: smoking cannabis and city of Tokyo, which was so important to me as a design influence. 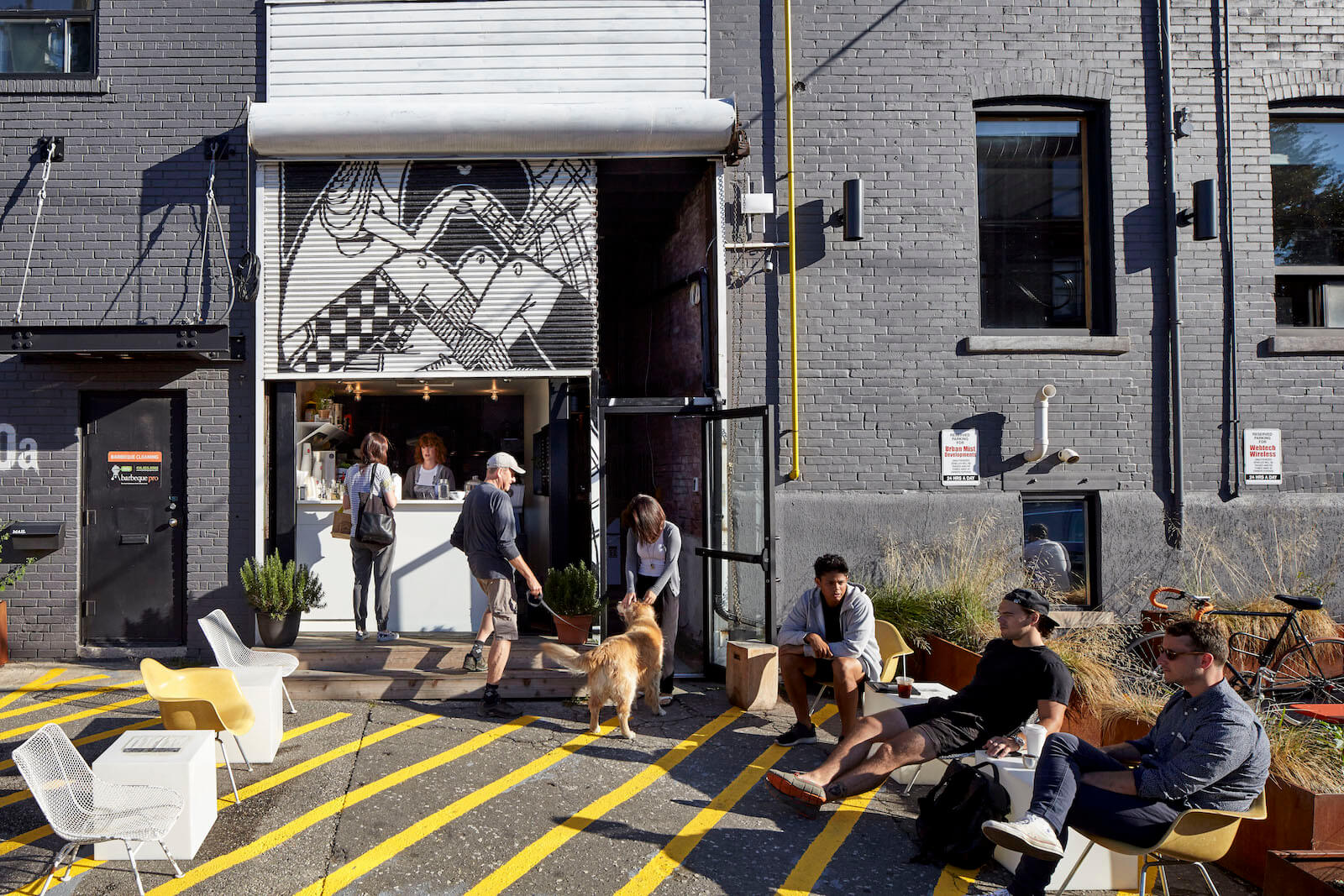 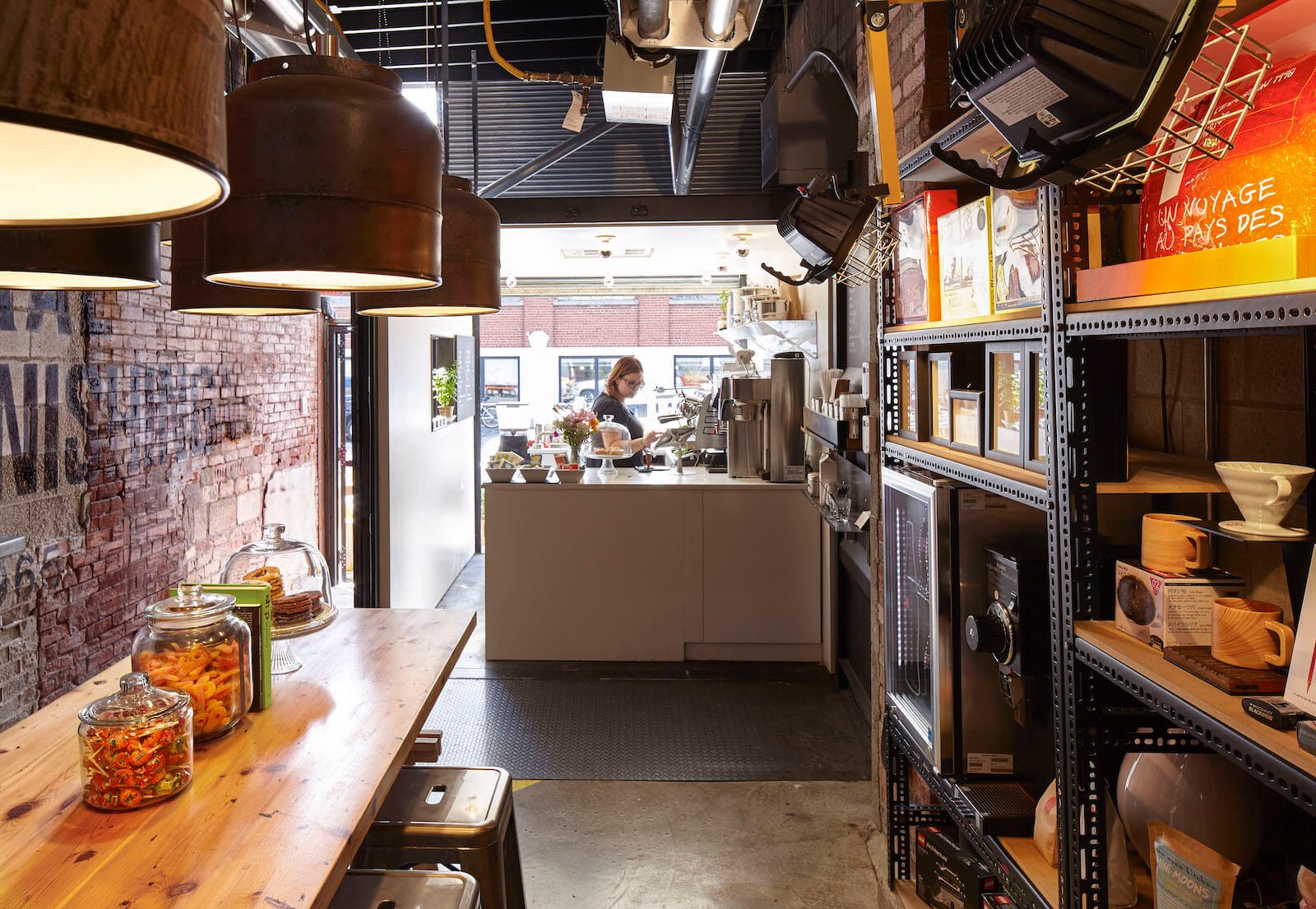 Steven Fong designed the original Tokyo Smoke location, a shipping container tucked into the gap between two buildings on a downtown Toronto street. Photos, top of article and here, by Ben Rahn

And then you created the Tokyo Smoke store on Adelaide Street [in downtown Toronto].

That was the catalyst for everything coming together. Early on, I learned if you want to create a brand, you need to show people what it looks like. Then came the idea of using the coffee shop to educate the customer about cannabis, taking design excellence and applying it to every piece of what we were doing. So, when we set out to build the coffee shop, it wasn’t about just doing a coffee shop. It was about doing the best-designed coffee shop and paying attention to all the details.

So we created a shipping container and placed it into what would have been an awful-looking loading dock – building this refined, contemporary space that encompassed all the design elements, even how the name was sort of painted on the wall to fade out as a tribute to the company that originally owned the building. So, we used lot of authenticity to create this new brand.

I remember my first time going to Tokyo Smoke and being immediately struck by the way it was situated, tucked into a gap between two buildings. And you went in and there were all these design collectibles, too. I hadn’t heard of Tokyo Smoke, but a lot of people I told about the store were like, “Oh yeah, that’s a cannabis brand.” So there was already a built-in understanding amongst cool people about what your brand was all about, and then this store became a physical representation of it.

Right. It started with the curious person looking because of the design. And then Alan [Lorne’s son] came along, and we co-founded the company that up until then had been this idea, this vision, on which I was basically collaborating with the most talented people that were in my inner circle. But Alan brought all of the digital savvy and new view about cannabis and then assembled the most incredible people.

At that point, the customer base was just shifting from people who were hippies in the sixties and seventies to the mainstream. Then there was the creation of the national medical marijuana program in 2002. And I had been in it all that time, even though my difference was that I brought design, I kept bringing design. Others kept coming up with good product, but it was always in plastic bags. And all of a sudden there was an opportunity to package it in a beautiful way. One of the early issues was that as cannabis became decriminalized, it came with all the regulations that didn’t allow you to advertise. So that brand and that logo was going to be the most important thing in order to succeed in the market. 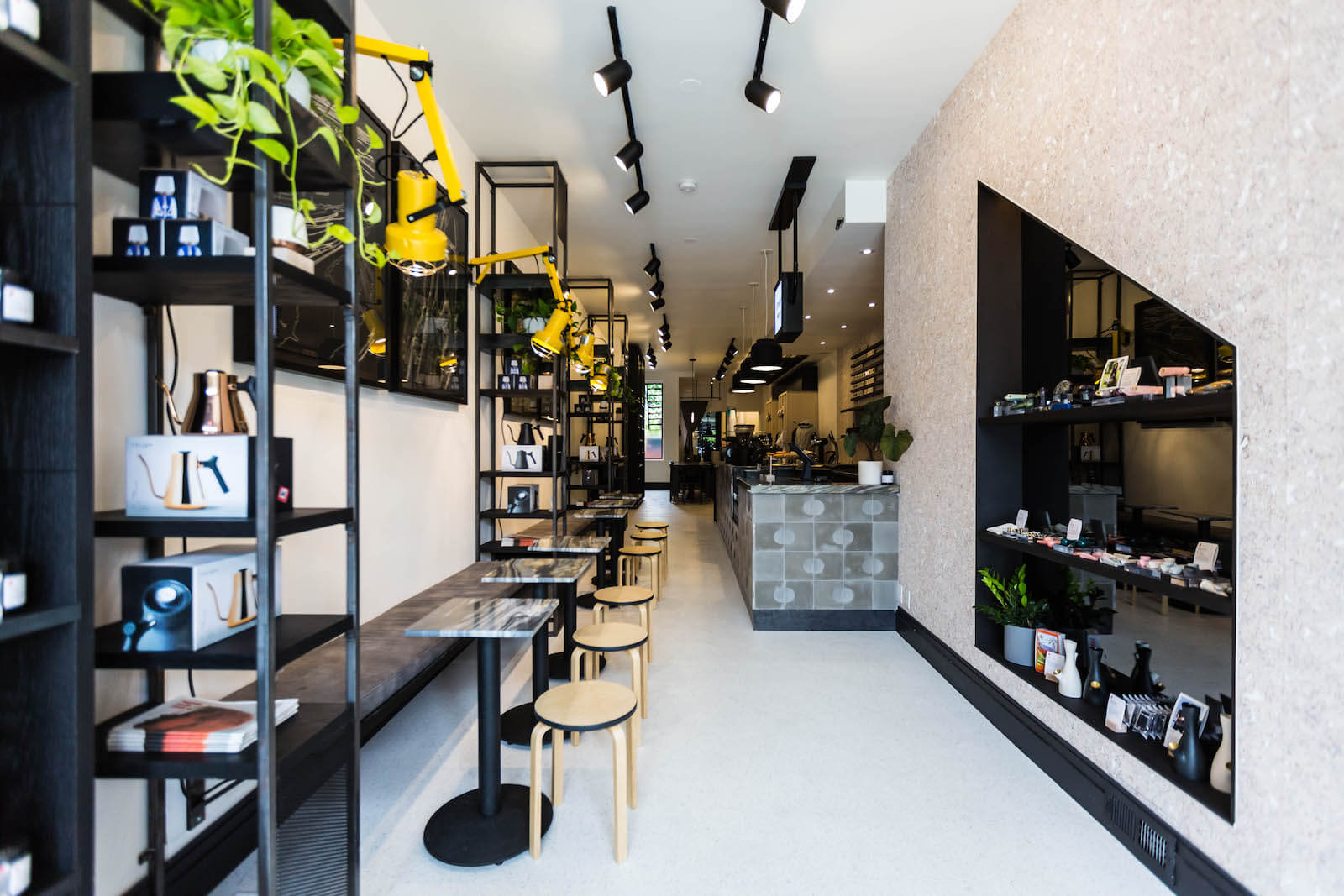 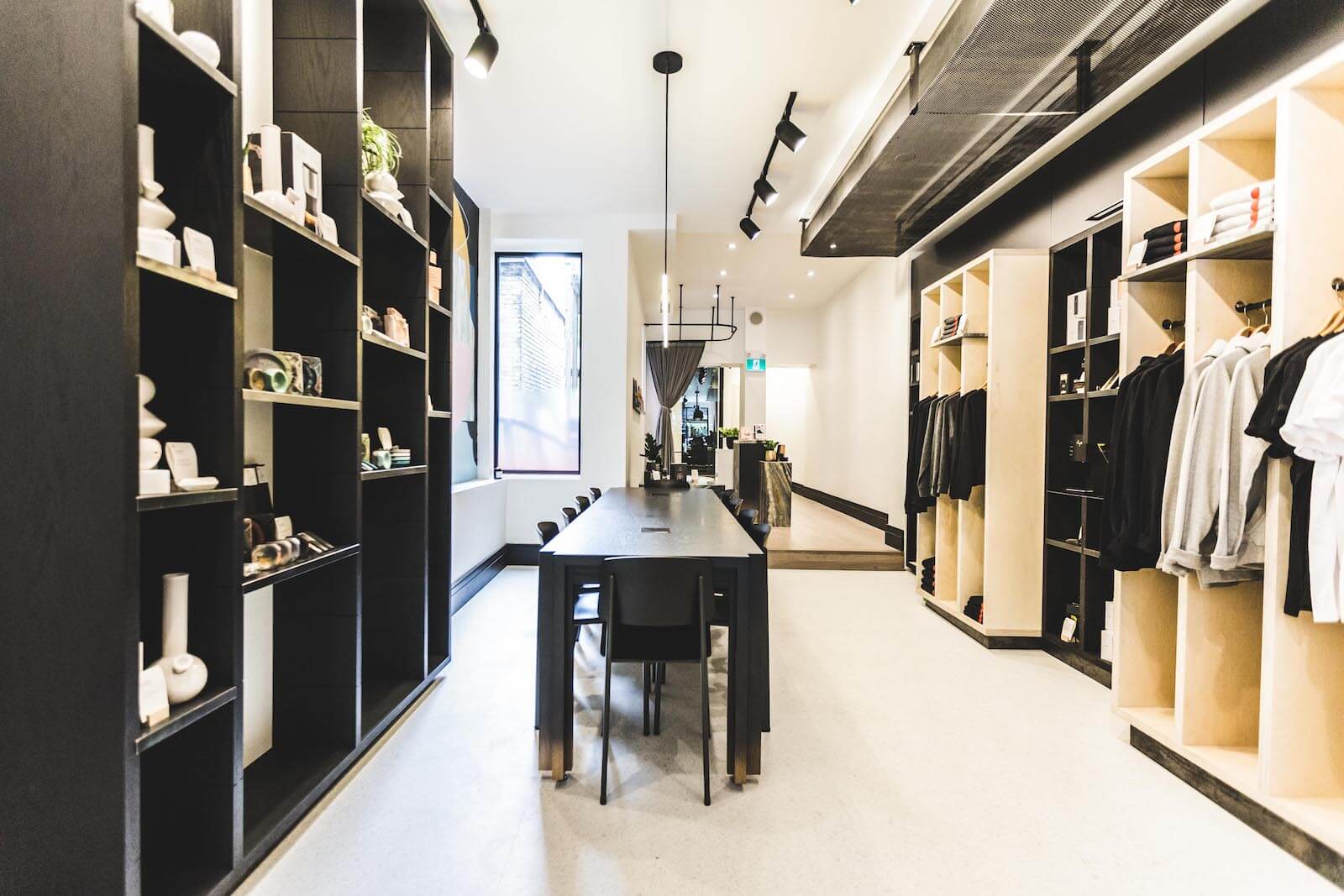 An evolution of the Tokyo Smoke brand, the Queen Street West location was realized by DesignAgency. Photos by Kayla Rocca.

Since cannabis has become legalized, there has been an explosion of retail stores. From your perspective, what are the ingredients for staying power in this business?

Those who are building brands where design and lifestyle is core to what they’re doing are hitting it out of the park. Especially those with the ability to not only show that in bricks and mortar but also online. Remember, the cannabis business was built online first. And this is now becoming a huge data game: what age are your consumers, what time of day did they make their purchase, how big is their basket size, are they buying into sativa, vapes, edibles? What’s their average spend per week, what’s their average spend per month? What does that consumer look like and what else is he or she doing? Once I understand that, I can text them [with product news] directly.

And speaking of the online part: even if you have a bricks and mortar shop, you can’t really show the main merchandise, the actual cannabis product. So why even open a physical shop to begin with when you can do all this online and gather all that data anyway?

Bricks and mortar are so important to showing your brand and standing apart. Those stores are meeting places; it’s the difference between shopping online and not shopping online and especially if you’re introducing new products, you want to talk to the customer. I think there are 500 dispensaries right now in Ontario, and they’re committed to having a thousand in Ontario in the next year. 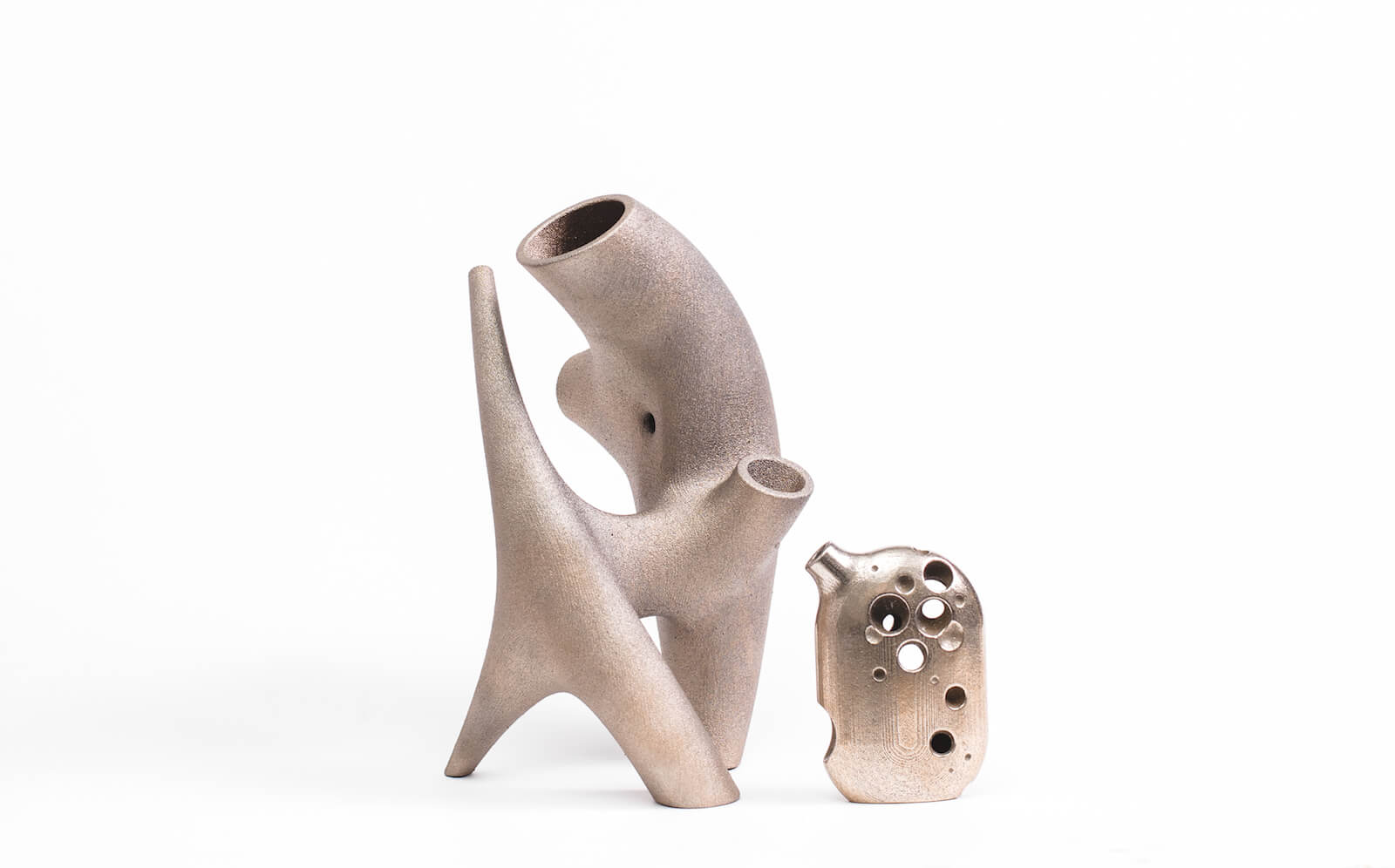 Tokyo Smoke made the foray into paraphernalia design, including this sculptural bong by Partisans. Photo by David Pike.

From cannabis, you’ve pivoted to mushrooms. Can you tell me about?

Yes, my latest creation and venture is called GoodCap Wellness. I’m a co-founder and it’s about all things mushrooms. We have two divisions. We have one called Sansero Life Sciences, which is about creating a pharmaceutical drug that has a low dose of psilocybin in it; you would take it on a daily basis to replace medication for depression. And the second part of it is A Good Mushroom, which is a retail concept in development where we will sell functional mushrooms: fresh mushrooms and mushroom extracts, such as lion’s mane, in tinctures and powders so you can mix it in with your food and drinks, or you can just take it under your tongue.

This is not about recreational drug use, it’s about a medicine; it’s revolutionizing how we treat mental illness and post-traumatic stress disorder. For me, it’s so exciting because I’m getting to bring design and branding and architecture. Part of what I do is I create companies just like I created buildings.

How do you think design can help in terms of eliminating the sort of taboos around both taking a psychedelic and also around mental illness itself?

I think people trust brands. There are no brands in that space right now; there’s a couple emerging ones, but none of them that were built from a brand down as opposed to a manufacturing operation. That’s where we’ll educate the consumer, intrigue them, de-stigmatize. From our point of view, we’re going to bring branding to not only what we’re doing, at GoodCap Wellness, but I think we’ll bring branding into the whole pharmaceutical world.

What do you foresee for the future of psychedelics going mainstream?

I see it becoming a medicine – one that is either what I’ll call low dose, which is something that you can take without supervision or assisted therapy, or as a medicine with assisted therapy. I don’t have any belief in a recreational market. What I do see is a growing recreational market around functional mushrooms that have no psychedelics in them and that just have huge nutritional value or help with building the immune system and with aging. Mushrooms are brain food. Michael Pollan’s book, How To Change Your Mind, was a catalyst for me. 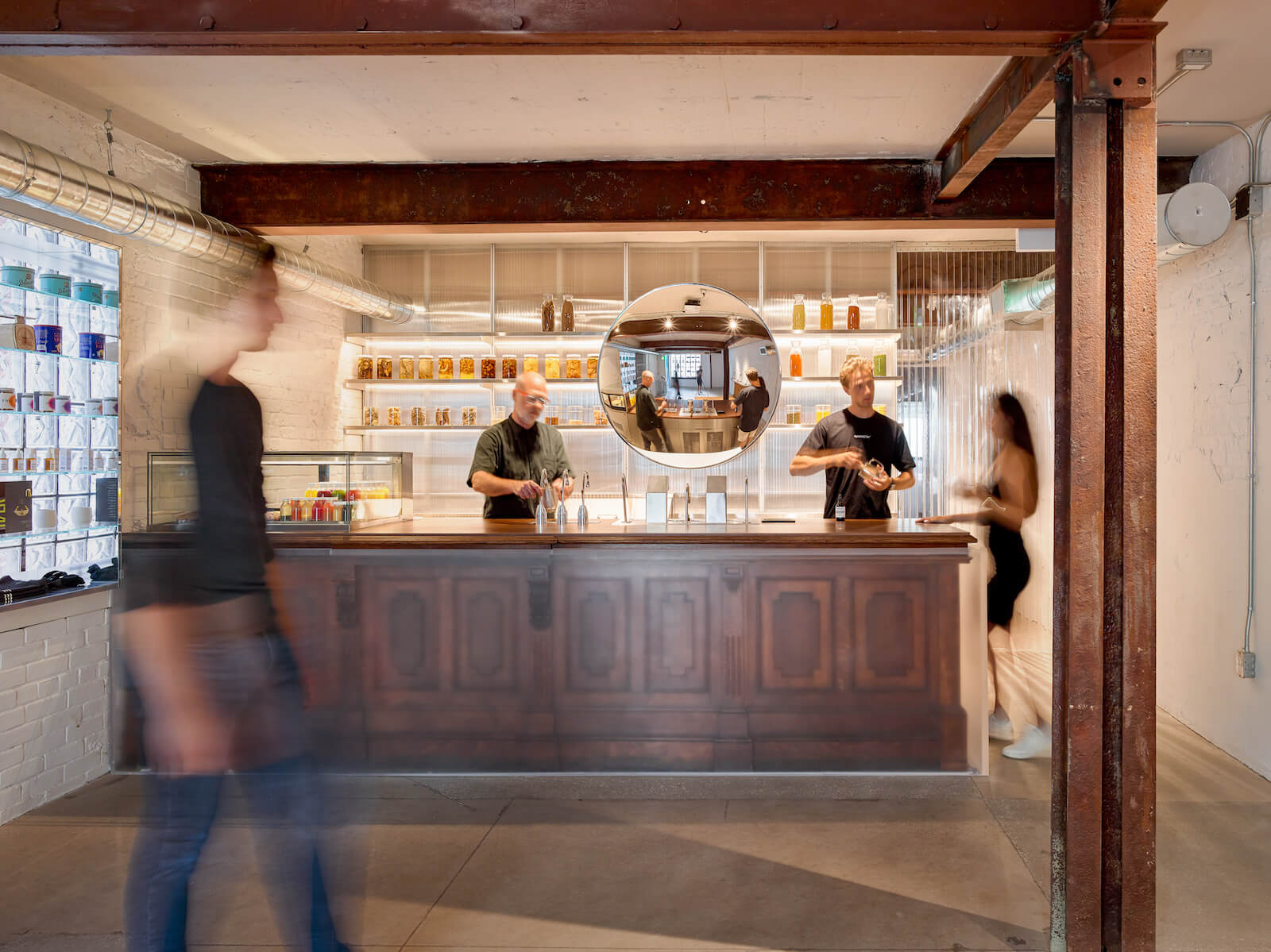 A Good Mushroom is a concept under development; it will sell “all things mushrooms” – from teas and dried varieties to tinctures. Steven Fong is the architect of record. Photo by Scott Norsworthy.

You’ve been teaching a course at U of T, Daniels with Steven Fong, the architect who designed the first Tokyo Smoke. Can you tell me about how you’re getting students tuned into emerging markets and what’s coming next?

The course is called Architecture as an Entrepreneurial Practice, and we bring in entrepreneurs for whom design and branding has played a major part of their business, including Paddy Harrington of design agency Frontier, the actor Jim Belushi – who just did a series on Discovery about his experience creating Growing Belushi, which is one of the hottest growing cannabis brands – and Diane Bald, Roots’ design director. So, it’s about exposing students to people who have done it and allowing them to create a business idea – and not a building.

Teaching is a huge passion of mine. And there’s a bigger role for me to play in architecture education, in bringing more exposure to entrepreneurship. It allows me a bigger platform to communicate and share all these experiences I’ve had. If somebody had shared similar experiences with me when I was 24, it would have had a major impact on my life. And we don’t do that well in architecture; we just expose people to architecture, but that’s only part of what’s possible with design.

We chat with the founder of Tokyo Smoke and GoodCap Wellness about how he’s bringing design to emerging markets.