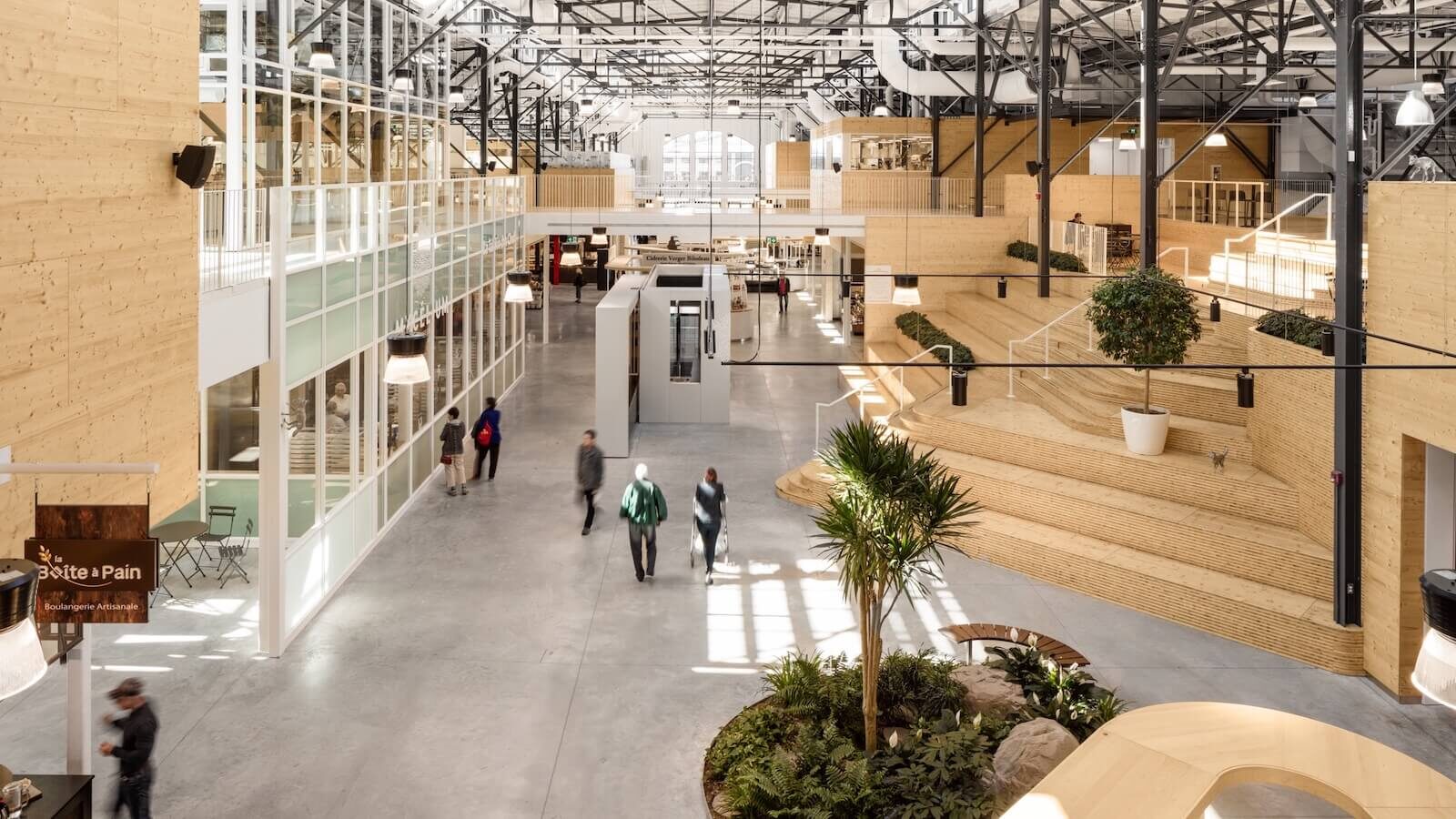 The designers transformed the expansive interior, which spans 9,000 square metres under soaring, 12-metre ceilings, into an intimate, sociable milieu that is home to 100 local vendors. They planned the market as a sort of village in miniature, one that unfolds in a playful array of indoor streets and laneways, a capacious square at its heart.

Light wood finishes and ample boreal greenery energize what is now a human-scaled environment within the hall’s cavernous, industrial skeleton; the use of cross-laminated blonde wood accentuates the presence of sunlight, which pours in through the skylights strategically positioned above the central walkways. (At the hall’s south end, massive operable windows bring even more natural light and ventilation into the space.)

While simple stalls line much of the space, the larger stands and storefronts are more bespoke, adding a sense of variety to the elegantly unified aesthetic. Throughout, simple chandeliers and square white tiles also accent individual retailers, layering yet more scale and texture to the visitor experience.

Bisson associés and Atelier Pierre Thibault’s combination of both single and double volumes, meanwhile, introduces a sort of urban complexity. The bleachers at the heart of the market’s open square establish an informal and performance venue with plenty of seating. Up on the second floor, the quieter, child-friendly environment doubles as a space for smaller events.

In addition to its 15 commercial kitchens, the Grand Marché also features an on-site food waste management system to collect compost; this functionality is made public, as a showcase of the positive environmental impacts of better efficiency. An aquaponic system managed by Laval University furthers the sustainable mandate while providing a more formal educational component; and, dubbed Mycélium, an in-house business incubator helps launch local agro- entrepreneurs. All of this activity underlines the market’s emphasis on local food.

The whole of it – both design and program – is tied together by a powerful sense of place. “We sought to design a market like a village, with its public square and its streets, to allow us to wander, discover and savour [Quebec’s] products in a warm, bright environment,” says architect Pierre Thibault.