Return to West Coast Mod
A steep hill and a narrow lot: Splyce Design takes on this double-barrelled challenge and builds a family home without disrupting nature. 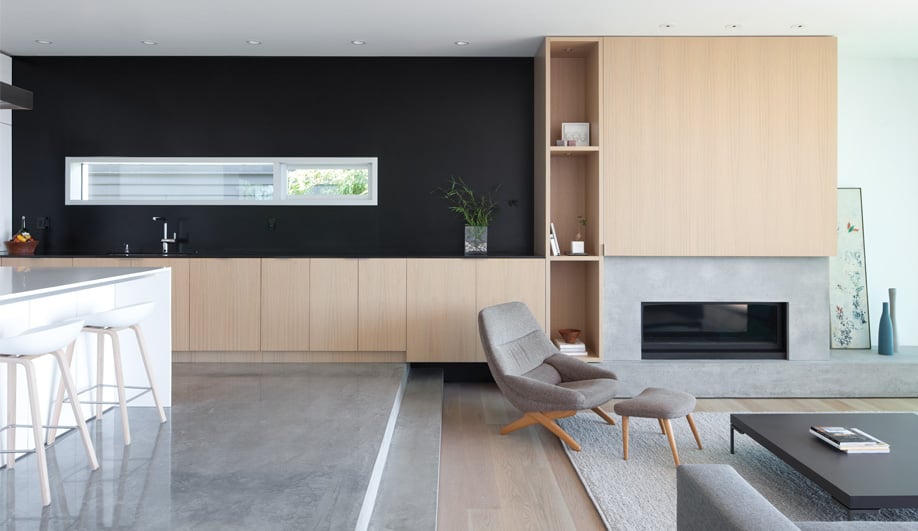 On the floors throughout the three-storey house, the designer chose an understated palette of stained oak and polished concrete. Three About a Stool bar stools by Hay line up along the kitchen counter. 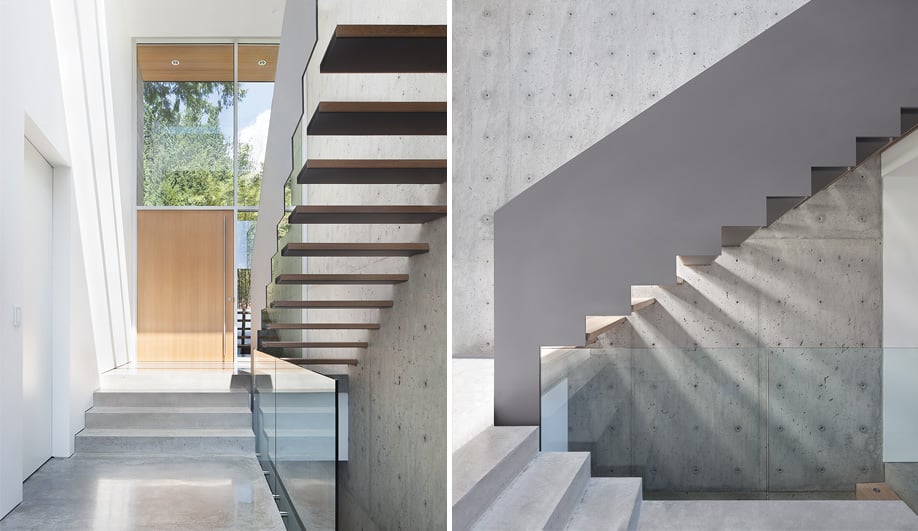 Architect Nigel Parish kept the interior light and focused on details, such as the floating stairs and custom metal handrail. The step trusses are crafted out of metal and wrapped in wood. 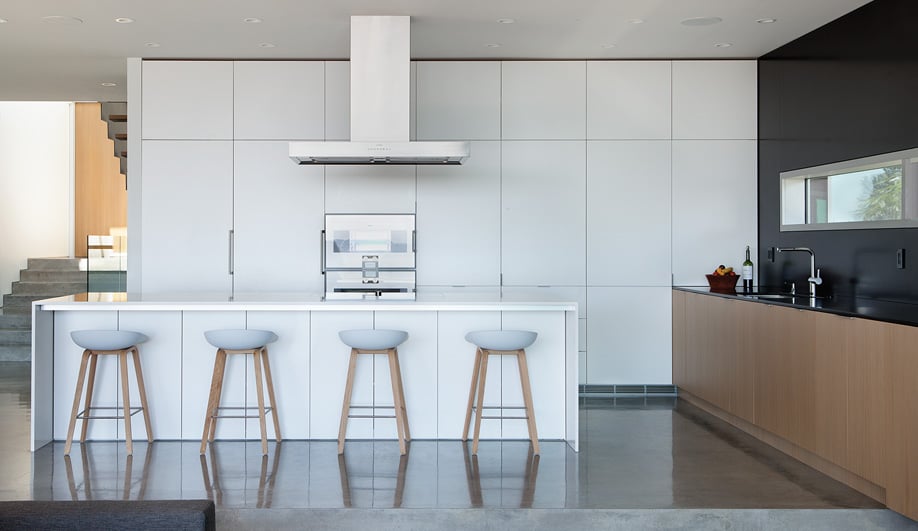 White custom cabinetry in the kitchen is contrasted with a bank of white oak cupboards and a black honed granite countertop. 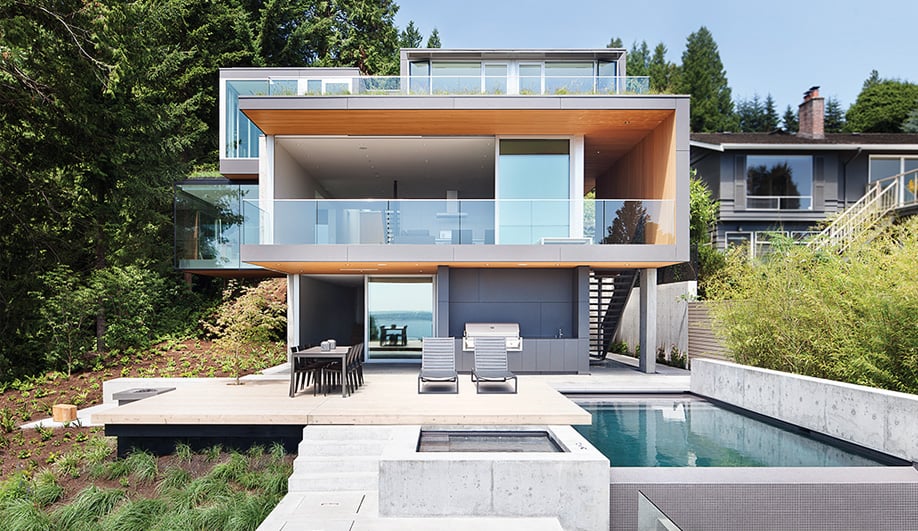 The living room on the main level overlooks the pool, a hot tub, and a patio generous enough to accommodate a full-size dining table. 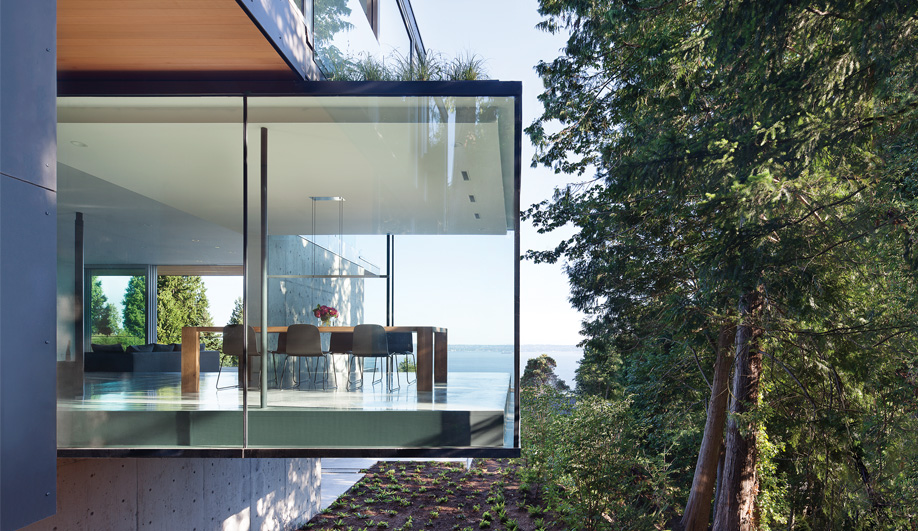 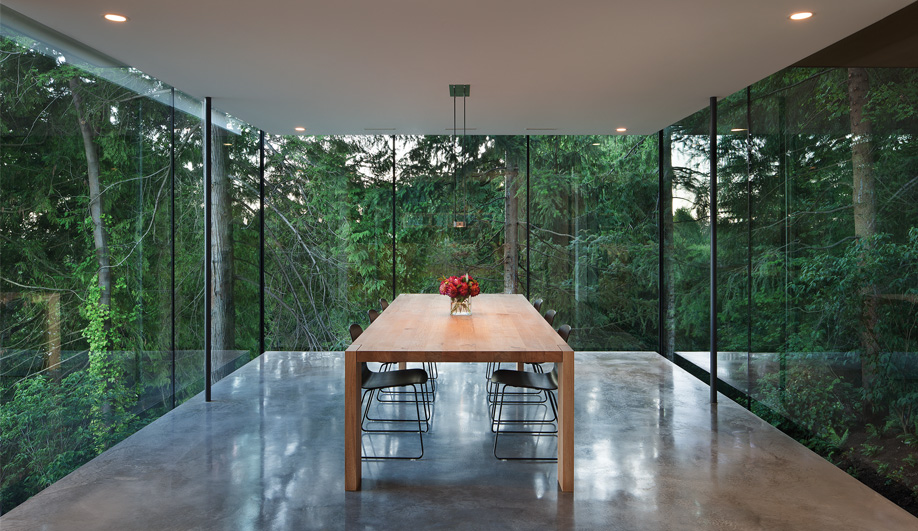 The glazed dining room canti­levers beyond the foundation walls by 4.6 metres and is surrounded by a cedar grove. London table by E15. 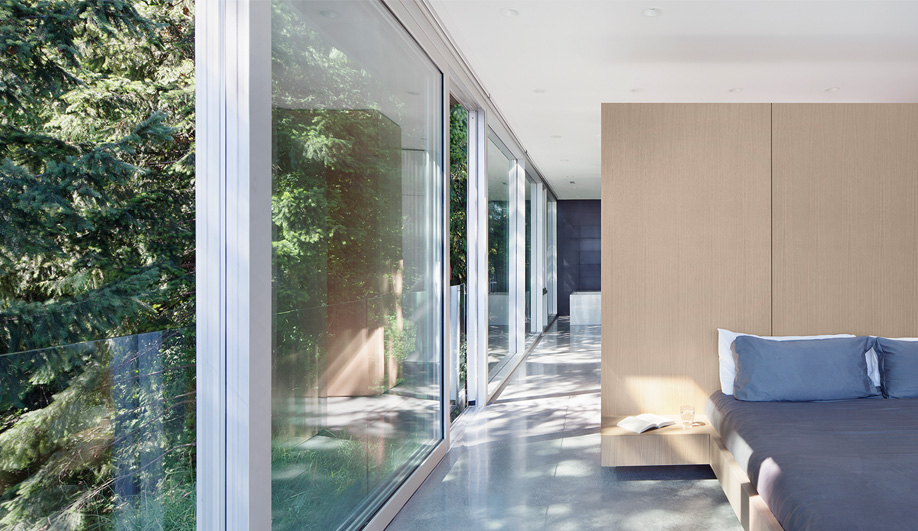 A wall of sliding glass doors on the upper level, where the master suite is located, leads to an expansive deck. 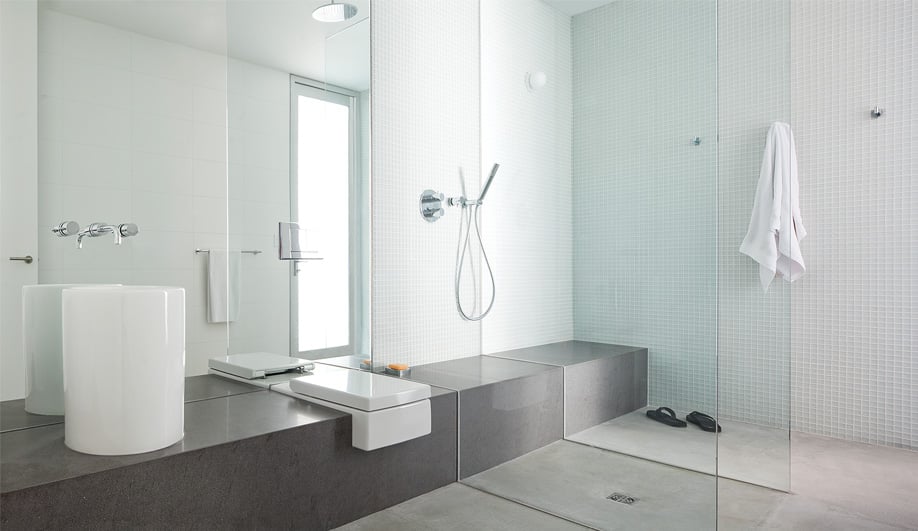 The lower-level bathroom features a Vero toilet and a Bacino sink, both by Duravit. Faucets by Riobel.

West Coast Modernist architects were famous for drawing inspiration from the dramatic geography that surrounded them. Rather than mow down nature, they integrated their designs to co-exist with it, and they continually sought out ways to blur the line between indoors and out.

Nigel Parish of Splyce Design pays homage to this local tradition with a three-storey home in West Vancouver, a residential enclave known for its dramatically sloping sites and pristine views to the Pacific Ocean. Named Russet Place Residence, the family house and its adjoining infinity pool appear to cascade down the mountainside like a stack of books.

“The design grew out of the hardships of the site,” explains Parish, reflecting on the numerous obstacles that made building such a challenge. He required an environmental consultant to initially survey the lot, to ensure any lost habitat was replaced post-construction. As well, the steep grade to the south and a riparian setback to the west left only a 13.5-metre-wide sliver of land for building, roughly half that of a typical site. Despite there already being an existing house, the narrow lot restricted the placement for a new, larger home, pushing it closer to the one next door. To appease neighbours concerned about losing their views, Parish produced sketches of what a developer would likely do, given the chance.

Walking through Russet Place now, it is hard to imagine that it resulted from overcoming so many limitations. From the entry, the main level steps gracefully downward, following the site’s topography and leading to the kitchen and the living area beyond. Sliding glass doors open to a deck that overlooks the pool, a hot tub, and a terraced patio generous enough to accommodate a dining area.

The upper level, which contains three bedrooms, including the master suite, has direct access to another expansive deck. A flight of willowy stair treads of steel wrapped in wood, cantilevered from the concrete entry wall, connects the floors and accentuates the openness of the entire design.

One of Parish’s most impressive gestures is the dining room, contained within a glass volume that projects 4.6 metres beyond the foundation walls. “The cantilever was an elegant solution to a practical problem,” he says of the frameless glass box nestled into the surrounding cedar grove. While the retaining walls define the building’s footprint, the projection adds valuable floor area without disturbing the environment.

To break from the traditional coastal Modernist sensibility, Parish left the interior concrete walls raw and used smooth white surfaces as finishes. The minimalism means attention shifts toward the details, and the central staircase reveals how far Parish drilled down to get a clean, precise look. The solid metal guardrail appears to float above each step as it zigzags its way upward. In the living room, custom white oak panelling slides into place to conceal the large-screen TV.

One of the biggest goals, however, was maintaining a connection to the landscape on all three levels. Working in sections, Parish used the site to liberate the design from conventional spatial planning, focusing instead on a careful choreography of views and exterior spaces. Each floor sits on top of the next, and from a distant perspective the entire structure resembles an inverted Jenga tower.

Born and raised in West Vancouver himself, Parish is well versed in the mantra of the West Coast Modernists that states architecture, especially residential projects, should connect people to the landscape, by bringing materials and views from the outside in. “Designing someone’s home is an intimate experience,” notes Parish. “It’s based on a trust that is earned by working closely together over time.”