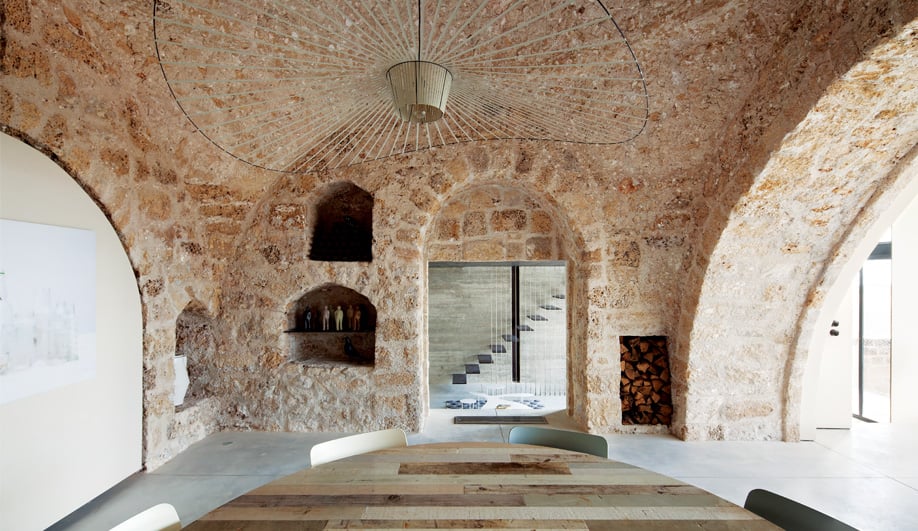 The dining room’s stone arches and walls with recessed nooks form a time-worn backdrop for such modern pieces as Petite Friture’s Vertigo ceiling lamp and a Piet Hein Eek table. 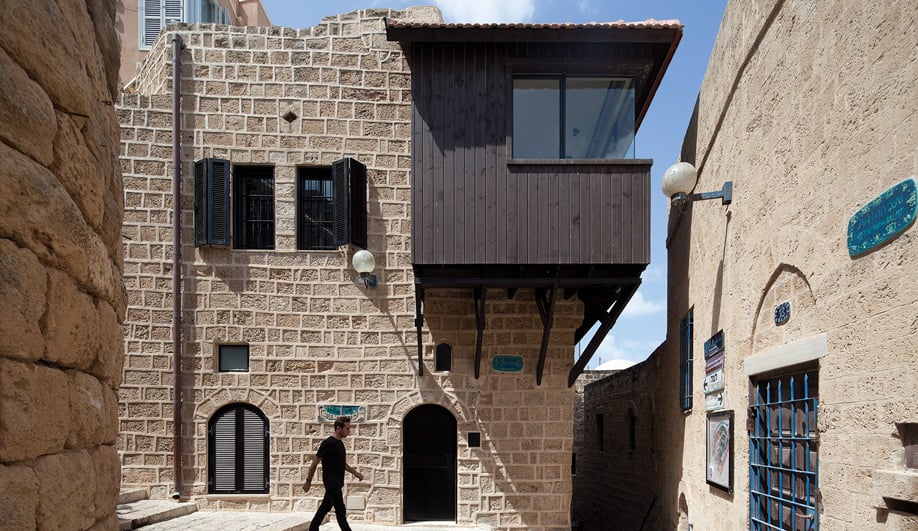 Except for a sleek wraparound window inserted into the second-floor’s timber extension, the house blends into its stone surroundings in Tel Aviv’s ancient Jaffa neighbourhood. 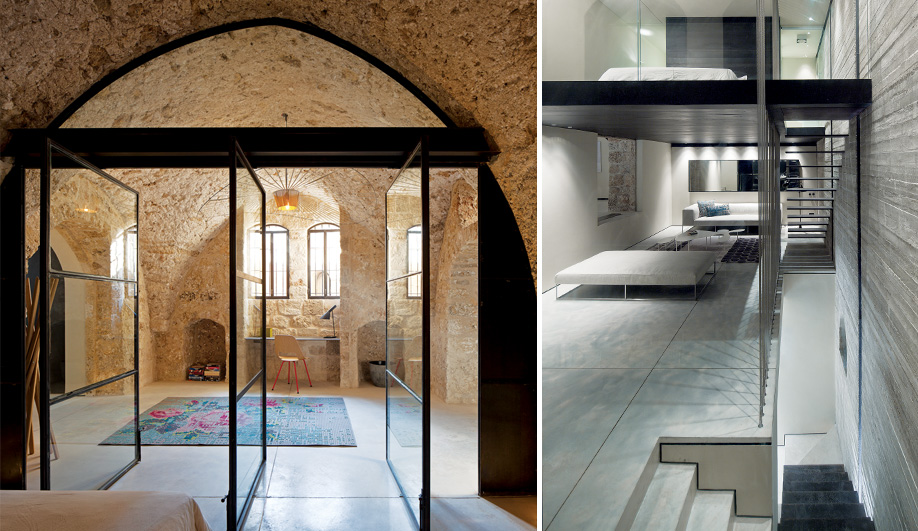 Left: On the entry level, a writing nook is positioned beneath the windows, and a guest bedroom lies beyond glass doors inserted into an archway. Canevas rug by Gan; Right: Incorporating modern elements such as floating iron steps, a cable balustrade and a textured concrete wall, the circulation volume connects all three floors. 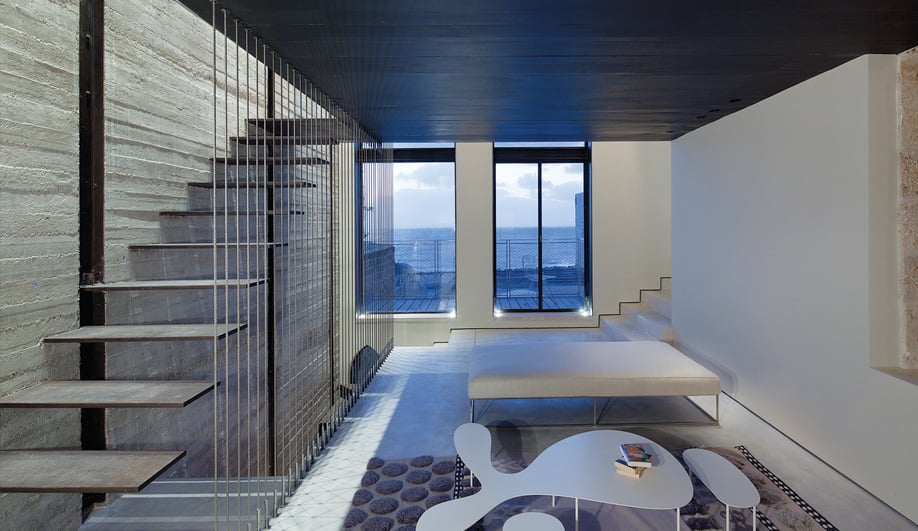 The living room, furnished with Rabbit and Tortoise tables by Living Divani, is situated on the home’s south side, where the architects made a bold gesture with a new circulation volume. 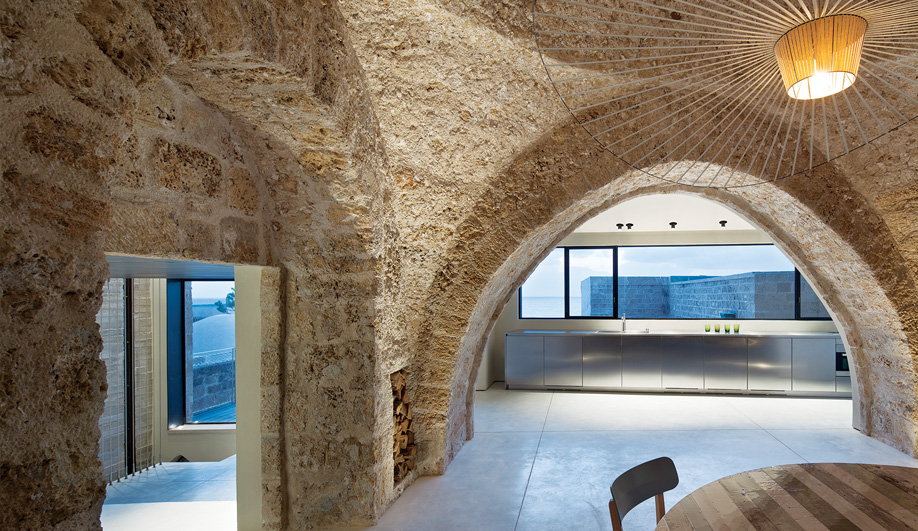 The stainless steel Boffi kitchen, viewed from the dining room through an archway. 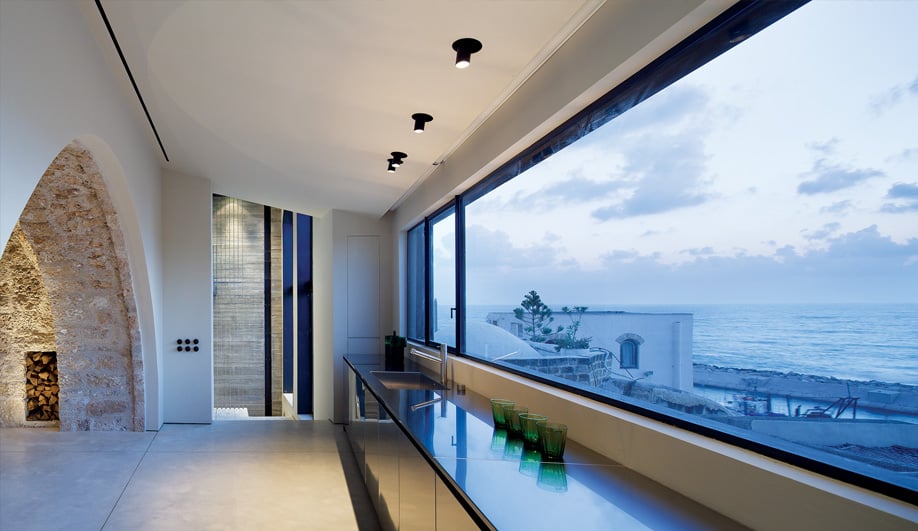 In the kitchen, the architects gave the owners a panoramic view of the port. 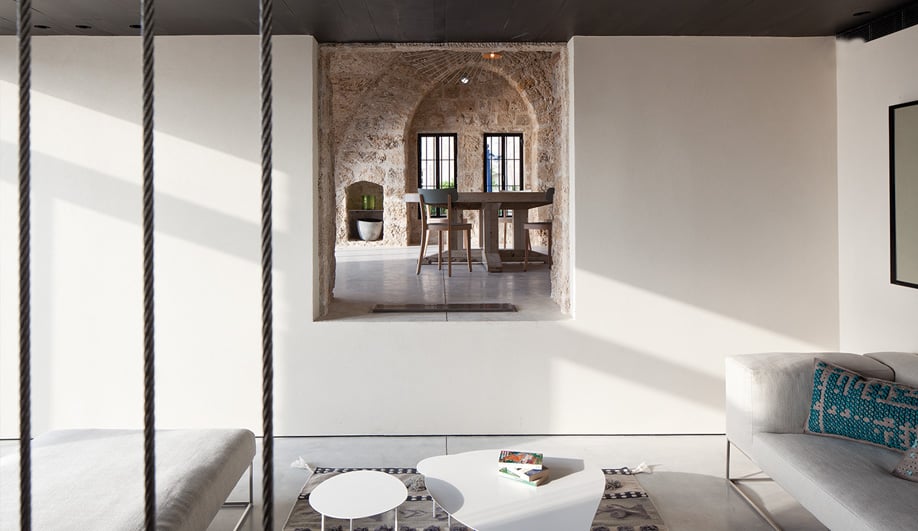 View from the modern living room to the stone dining room.

Rarely does a project so strongly mirror its geographic and cultural context as this new 180-square-metre house by Pitsou Kedem Architect does. Located in Jaffa, an ancient neighbourhood in relentlessly modern Tel Aviv, the house is approached through winding alleyways of old limestone buildings. The stone walls and the timber structure jutting from the upper floor are an image from the past, yet the door is unapologetically modern, in satinized black metal, elegantly announcing a dual identity.

“The first stage involved clearing the structure of the layers added during over 300 years of habitation,” explains project architect Raz Melamed, who designed the home with Pitsou Kedem and Irene Goldberg. The firm excavated the original stone walls, arches, and vaulted ceilings, then juxtaposed the restored structure with modern elements: whitewashed plaster walls, glass doors inserted in arches, a stainless steel kitchen.

But the biggest change was functional. On the home’s south side, the firm crafted a continuous vertical space for circulation, connecting all three floors. The passage is visually emphasized by a triple-height cable balustrade and a stairway featuring floating iron steps on the main level, a sleek counterpoint to the formwork-textured concrete wall. More important, it effectively arranges what was once a disjointed accumulation of spaces into a coherent sequence.

The entrance level contains a stone hall with a writing corner, and a guest room closed off by pivoting glass doors set into an archway. Upstairs, the living room feels modern, with crisp whitewashed plaster walls and polished concrete floors. On the metal-clad floor above, the bedroom can be glimpsed through a glass balustrade.

Stepping across the living room and up four stairs, you reach the northern part of the house, where the dining room flows into the kitchen through a majestic arch. Here, the architecture is old world, a domed ceiling and stone walls with recessed storage, while the Boffi kitchen completes the striking composition. Playful furnishings throughout the home, including Vertigo light fixtures by Petit Friture, and Rabbit and Tortoise tables by Living Divani, also set up a contrast against the neutral palette.

Considering its setting in the picturesque alleyways of old Jaffa, the house delivers privacy while remaining open to its scenic surroundings. Two double-height windows open from the living room to a balcony overlooking the Mediterranean Sea, and the ultra-modern kitchen enjoys a panoramic view over the oldest working port in the world. In a region where contrasts are not always a recipe for success, the architects have designed a home that brings together the strengths of different identities, and have struck an often elusive balance.