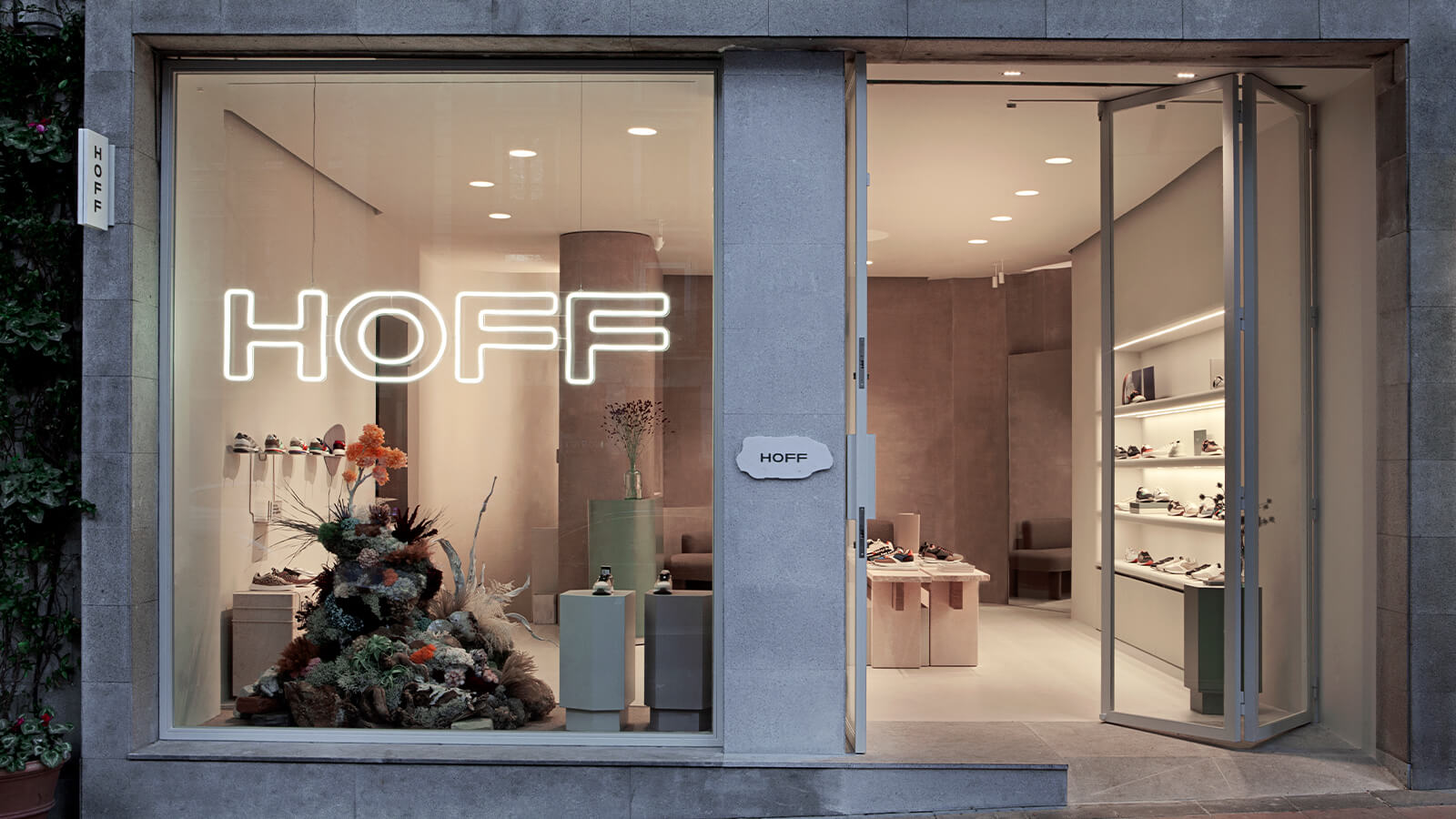 The design by Ciszak Dalmas Ferrari elevates kicks to a higher plane, presenting them on special platforms of varying colour and materiality

At a time when most of the globe is immobile, one of the neon messages in the sneaker brand Hoff’s new Madrid flagship — “The world is our stage” — seems especially poignant. At the same time, people confined to their immediate neighbourhoods worldwide are doing considerably more walking these days, so a pair of comfortable kicks is exactly what many of us probably need right now.

Visitors to the 45-square-metre shop, designed for Hoff by local studio Ciszak Dalmas Ferrari on the Spanish capital’s Calle Velázquez, will find that shoes quite literally take centre stage, the store’s interior architecture, in the words of the firm’s principals, “orbiting” around them like an enveloping galaxy.

“The materials [used], such as marble, stone and lacquered metal, are the hard solutions for a soft balance between architecture and products on display,” explain the designers. A colour palette composed of pinks, grey gradients and pale washed greens creates a rich yet neutral backdrop, while a handmade resin floor application complements all of the above to convey “a Zen-like sense of spatial harmony.”

On the store’s main wall, “the display solutions elevate the sneakers to a higher formal status, presenting the products as unique pieces, put on special platforms that change in colour and materiality.” On the secondary wall, new collections are presented on a flexible Klein Blue add-on metal system, customizable with different signage, graphics and messages. (In addition to “The world is our stage,” another reads, “Follow your sole.”)

Furniture-wise, the shop is entirely furnished with bespoke pieces, from a sofa and tables to props and visual accessories. The sofa, Ciszak and Dalmas note, is covered with a tweed bouclé, “similar to a woven pattern,” while “the central area revolves around two Sepulveda stone tables, a traditional material of the Madrid region that provides a sense of natural earthiness.”

The store’s curved walls, meanwhile, are treated with a layer of cement pigmented a pink-mauve called Mountbatten Pink, a colour used as naval camouflage by the British Royal Navy during World War II.

Large mirrors, moreover, have been placed in the corners to visually widen the space and to reflect customers during fittings, while a green Pinta Verde onyx from Brazil completes the design via such details as the display platforms and a logo application in the store’s facade.

In that facade’s main window, finally, hangs “a very recognizable neon sign” proclaiming the Hoff name. According to the designers, it is “visible from any angle in Calle Velázquez,” whether you approach by taxi, on a bike or on your own two feet.

The design by Ciszak Dalmas Ferrari elevates kicks to a higher plane, presenting them on special platforms of varying colour and materiality