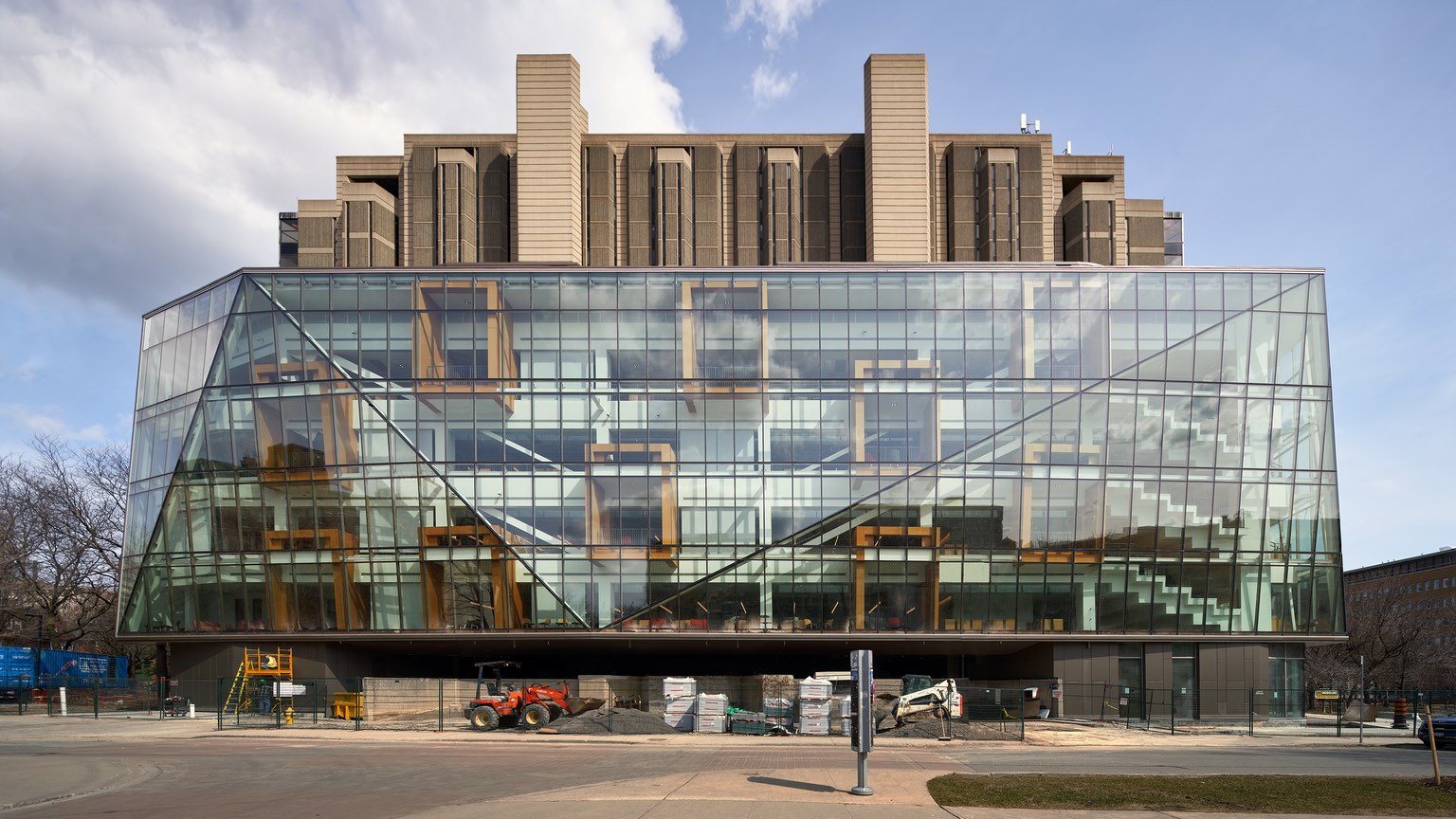 Depending on who you ask, the University of Toronto’s Robarts Library is either an architectural masterpiece or a gloomy eyesore. When Robarts Common was first announced more than a decade ago, the glassy addition seemed destined to prove similarly polarizing. Indeed, diehard brutalism devotees may still scoff at the idea of “Fort Book” being joined by an out-of-sync appendage. But now that the expansion has soft opened ahead of its official opening this fall, University of Toronto students will surely embrace the Diamond Schmitt project for finally delivering the warm and welcoming study space that the original Robarts never really could.

Indeed, how you feel about Robarts Common will largely be determined by the fact that it is such a strong departure from the concrete architecture of the 1973 structure that it extends from. Look closely, and you’ll find that many of the same design ideas that New York’s Warner, Burns, Toan and Lunde and Toronto’s Mathers and Haldenby originally expressed in Robarts Library — namely, angular geometry, robust proportions and dense layering — are actually cited heavily throughout this new work. But by no means is Robarts Common a rehash of an old thesis — it presents a much more modern philosophy, and it makes its points in a totally different style.

“We were always sort of thinking of ways that we could have a counterpoint or a variation on a theme of the base structure,” says Gary McCluskie, a principal at Diamond Schmitt. “It’s taking the original Robarts and abstracting it.” 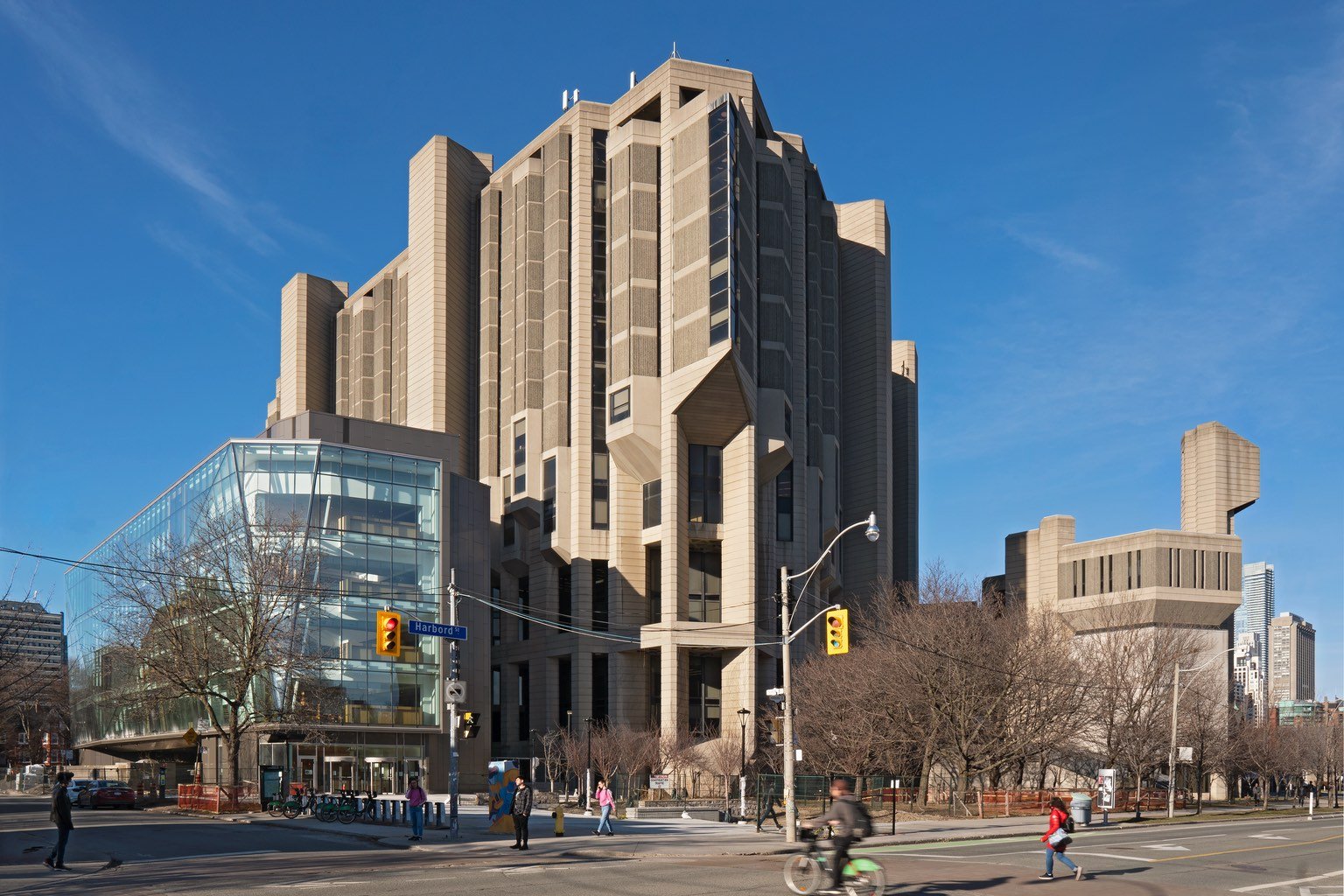 Where Robarts Library once sought to create an insular academic environment — not so much an ivory tower as a concrete fortress — packed with as many books as possible, Robarts Common sets out to deliver bright, open study spaces (1,200 of them, to be exact.) “We were looking for variety — for good hangout zones, informal free-for-all areas where people could pull furniture together, group study rooms and then more traditional desks, too,” McCluskie says. Thanks to the building’s abundance of oak and glass, many of these spaces feel not just cozy but also deeply connected to the surrounding neighbourhood.

The original Robarts building offers limited views, often delivered through windows no bigger than slits or through openings that look out past a series of tightly packed concrete columns. As a result, it has a tendency to block out everything but one’s studies, aiding in focused concentration but also contributing to the illusion that tests and term papers are all that matter. 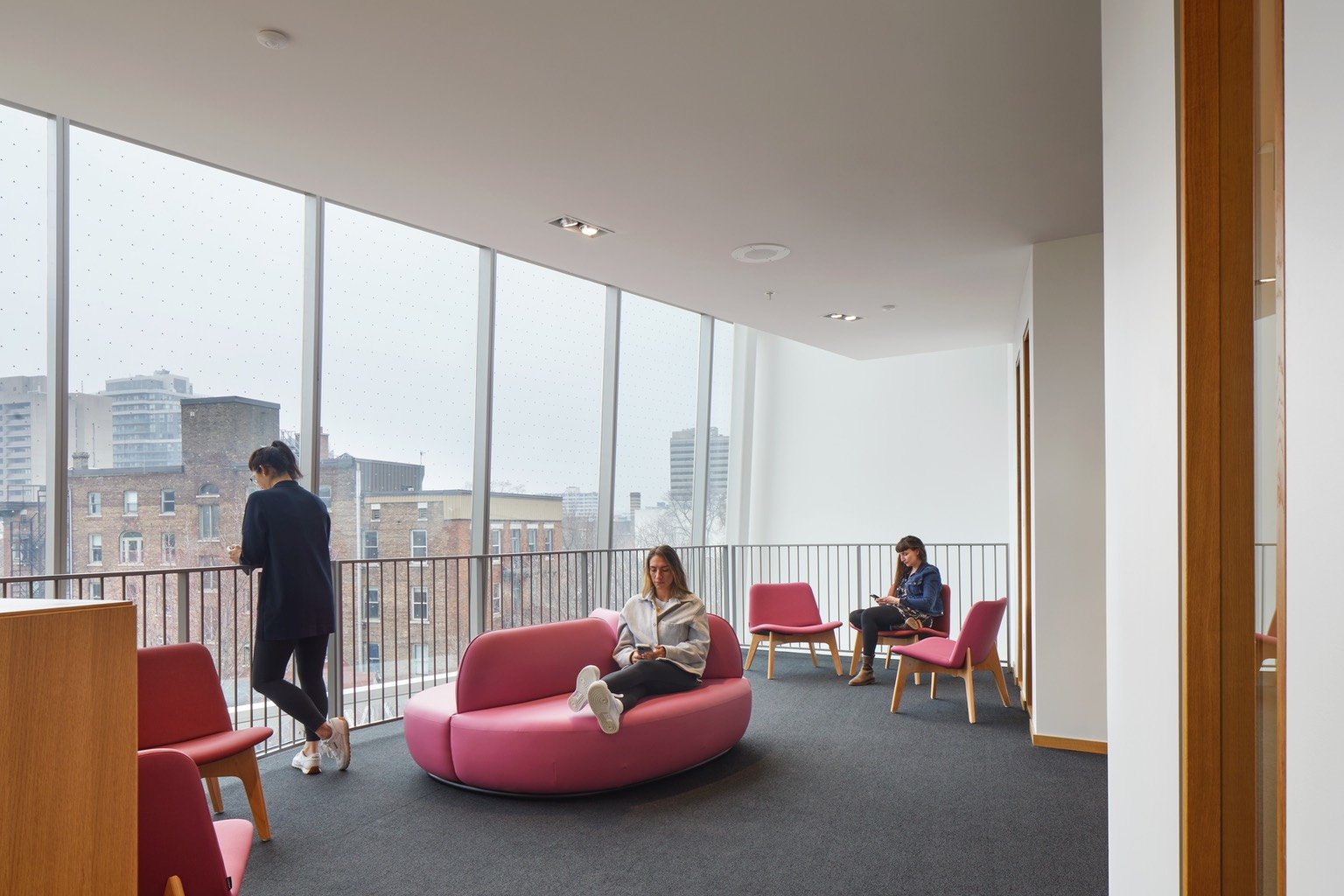 On the other hand, by framing the Annex’s Victorian houses and apartment towers through expansive glazing, Robarts Common places the world beyond academia front and centre, delivering a healthy reminder that higher education is at its best when balanced with deeper community engagement.

When it comes to its immediate campus surroundings, Robarts Common completes a missing piece of the historic Robarts site plan. Shortly after Diamond Schmitt was hired to envision the library’s new addition, the firm discovered that knockout panels were already in place on the 1973 building to facilitate a connection to a third offshoot structure, joining the Thomas Fischer Rare Books Library at the site’s southeastern corner and the Claude T. Bissell Building (which houses the Faculty of Information) to the north. “They had pre-planned the zoning to allow for a five-storey building,” says McCluskie.

But that’s not to say that introducing Robarts Common into the mix was simple — especially since the original goal was to build something quickly with minimal disruption to Robarts proper. At ground level, the east side of Robarts Library functions as the building’s loading dock, and a lot of mechanical infrastructure had been buried below this important access route. In other words, any new construction on this side of Robarts could only make very limited contact with the ground. The solution? A bridge-like structure that touches down at either end of the loading dock and then cantilevers above it. 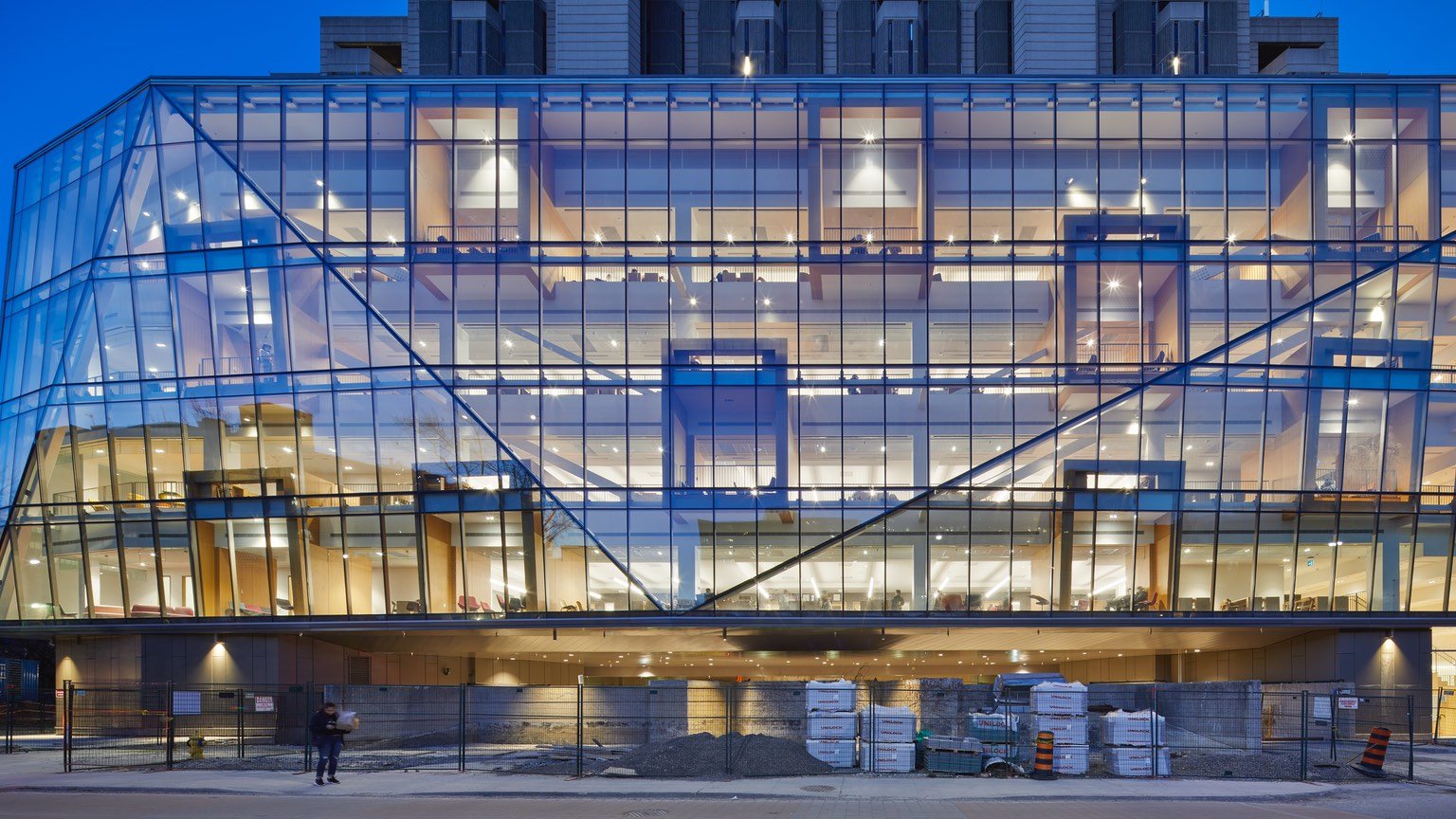 In turn, Robarts Common’s most exciting elevation is on Huron Street, where its five-storey height makes for a comfortable buffer between the colossal tower behind it and the shorter residences across the street. From certain viewpoints, several of the new building’s interior details — visible through glass that alternates between semi-reflective and fully transparent depending on the time of day — line up perfectly with elements of their adjoining structure. For instance, when viewed from far enough back on Glen Morris Street, the wooden boxes that seem to be floating inside Robarts Common lie on the same axis as the concrete bays above them.

Other aspects of Robarts Common continue to play with ideas of harmony and dissonance. On the right side of the building’s western elevation, interior cross beams run in parallel to the sloped edge of one of the faceted building’s five faces. On the left, another section of the facade follows a steeper slope, placing the beams behind it at a clashing angle. It’s a bit aggressive — but then again so are many of Robarts Library’s own sharp projections. 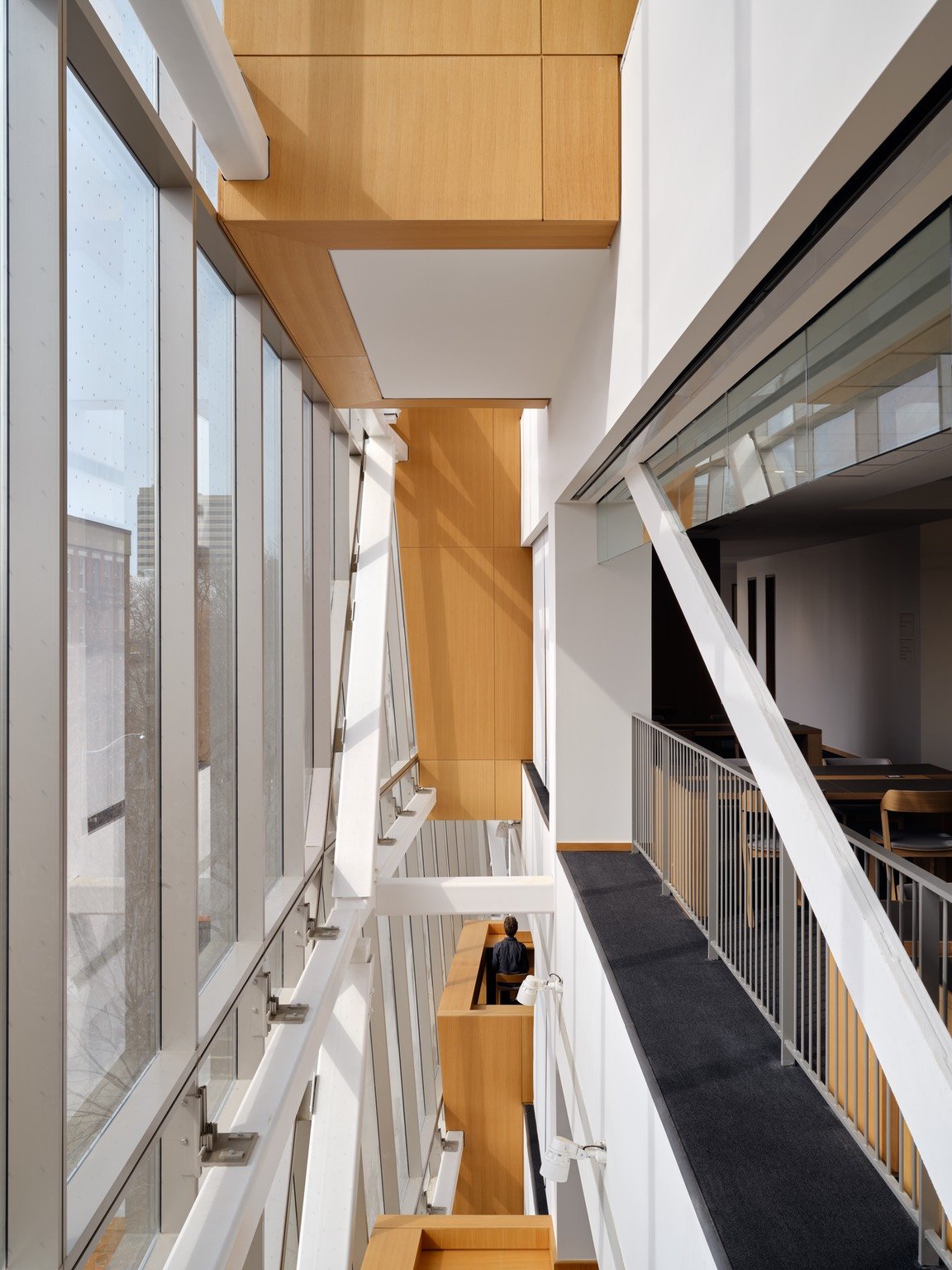 Meanwhile, the hefty proportions of Robarts Library’s walls are mirrored by the generous negative space between the glass and the edge of each floor plate. “There’s a sustainable design strategy there as well, in terms of passive ventilation,” says McCluskie. In the afternoon, roller blinds drop down to reduce heat gain. 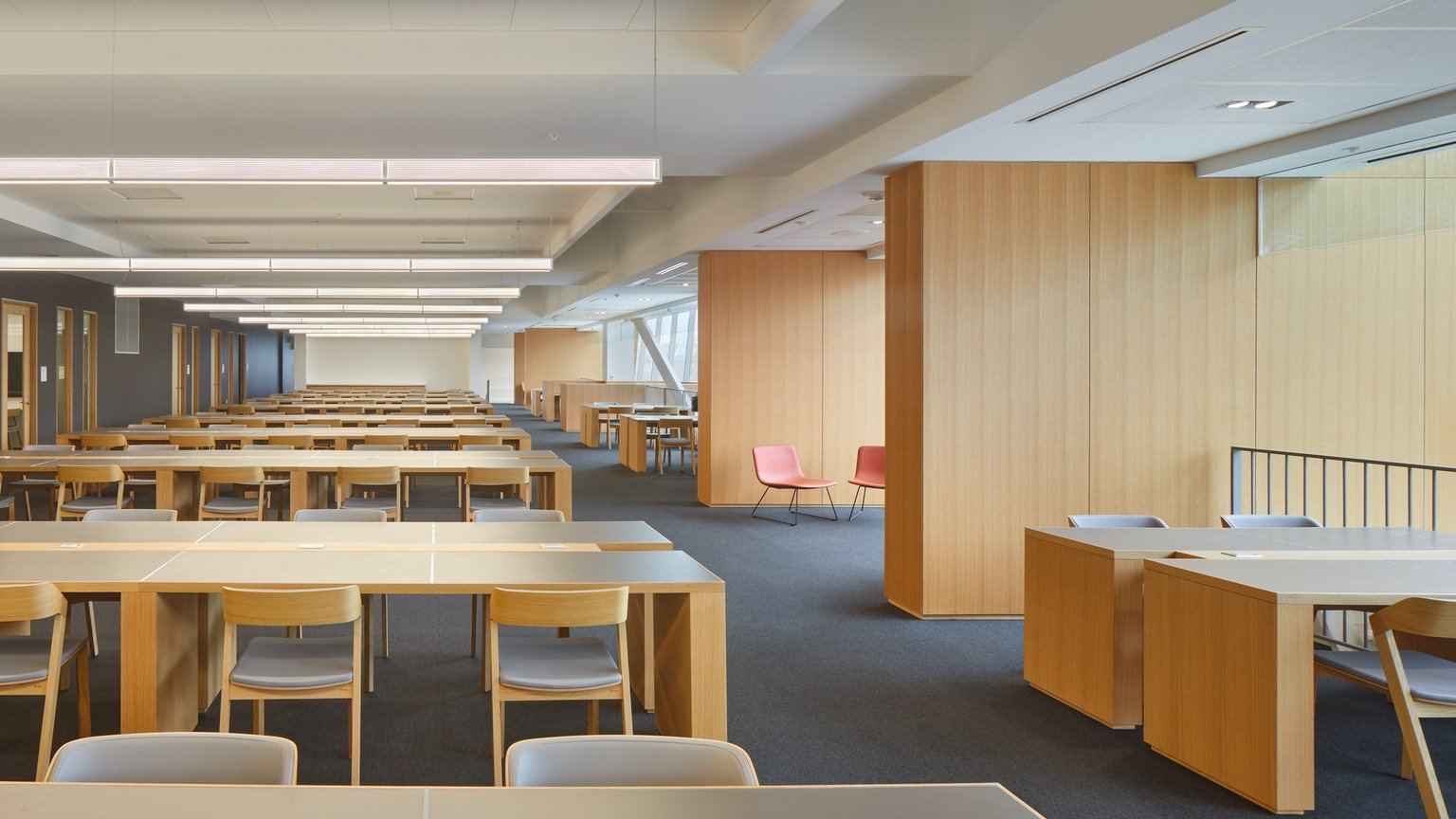 Moving further inwards, each floor’s oak forms deliver a warmer take on the hulking interiors of Robarts Library. Desks and stairs feel robust, yet also light. In fact, the main reading rooms express a kind of Scandinavian warmth and airiness. Even the building’s floors flow breezily together, linked by staircases that have been widened to create tiered seating and stepped rows of desks. 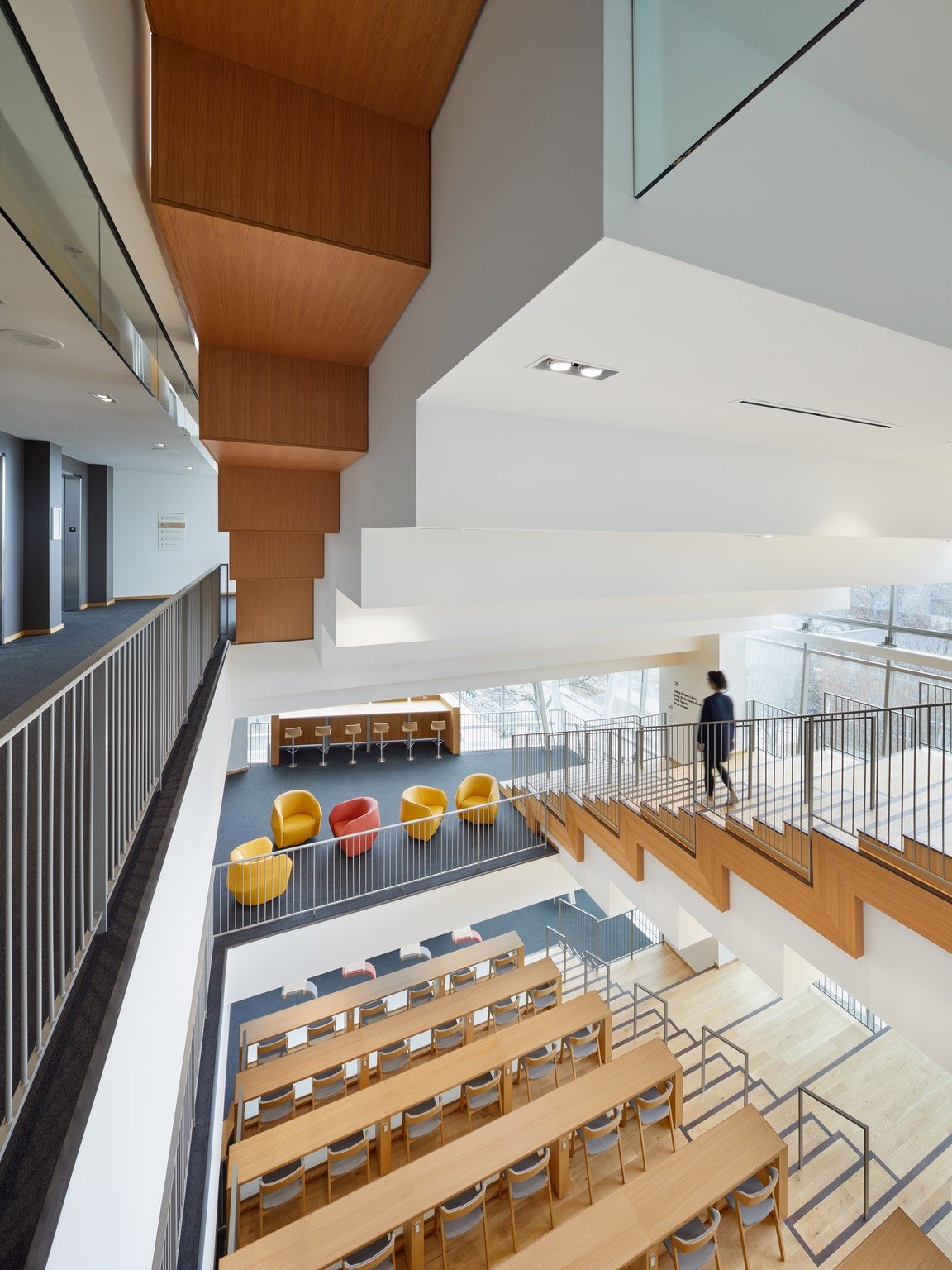 That said, as in other buildings that adopt this popular strategy, turning circulation areas into their own destination means that some areas of Robarts Common are not accessible to everyone. These include, most prominently, the bleacher seating that sits directly behind the front desk in Robarts Common’s lobby. As a compromise on other floors, the landings at the base of each staircase are marked with signage as being priority seating areas for those in mobility devices. 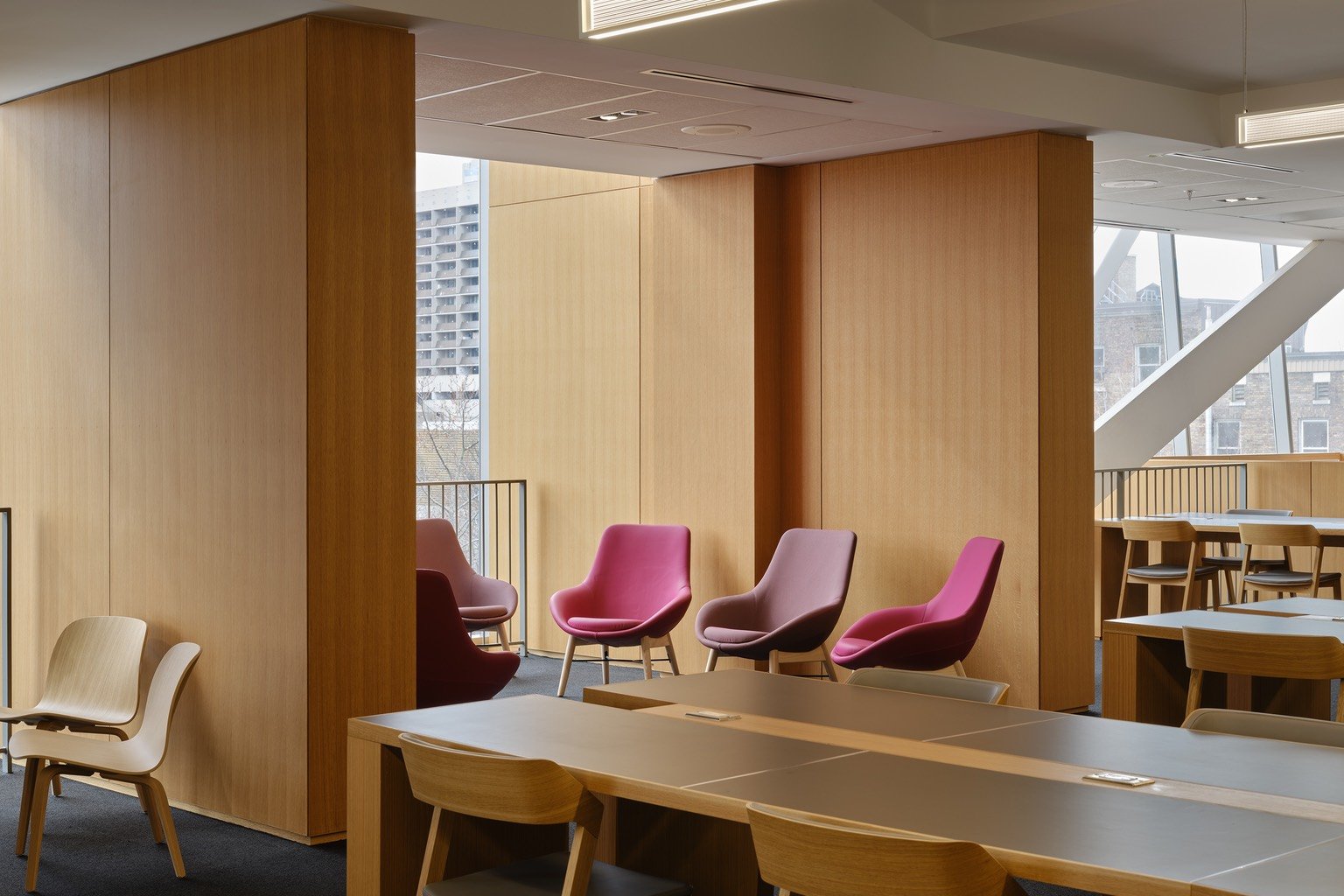 Another big sculptural move plays out along the western edge of the building’s study halls, where the wooden boxes that make such an impact when viewed from outside reveal their deeper functionality. As the boxes span multiple storeys, they contribute to different floors in different ways. On one floor, a cube’s sides might act as partitions that section off intimate reading nooks, while up above, its top edge may introduce a window-side counter surface.

It’s a fun element of the design that rewards deeper exploration. Unfortunately, that same spirit of intrigue is missing in another area where it could have been put to great effect: the building’s connection to Robarts proper. Instead, simple white hallways link the two structures with little sense of ceremony — a missed opportunity to develop a more meaningful sense of procession that plays off of Robarts Library’s venerable identity.

This is an effective summary of Robarts Common as a whole: as a standalone structure, it has strengths — but is it a worthy addition to Robarts Library, the landmark, the myth, the legend? Those hoping for the same sophisticated interplay of concrete and glass that Diamond Schmitt executed with Ottawa’s National Arts Centre renewal will find the relationship here less dynamic. Sure, there are clever aesthetic connections between the two that reward a close read. Yet, on the whole, the two structures feel more like neighbours than integrated parts of a whole. Granted, that’s partly by design. “I think Robarts is big enough that it can handle multiple identities,” says McCluskie. “In something of this size, you can have different neighbourhoods.” 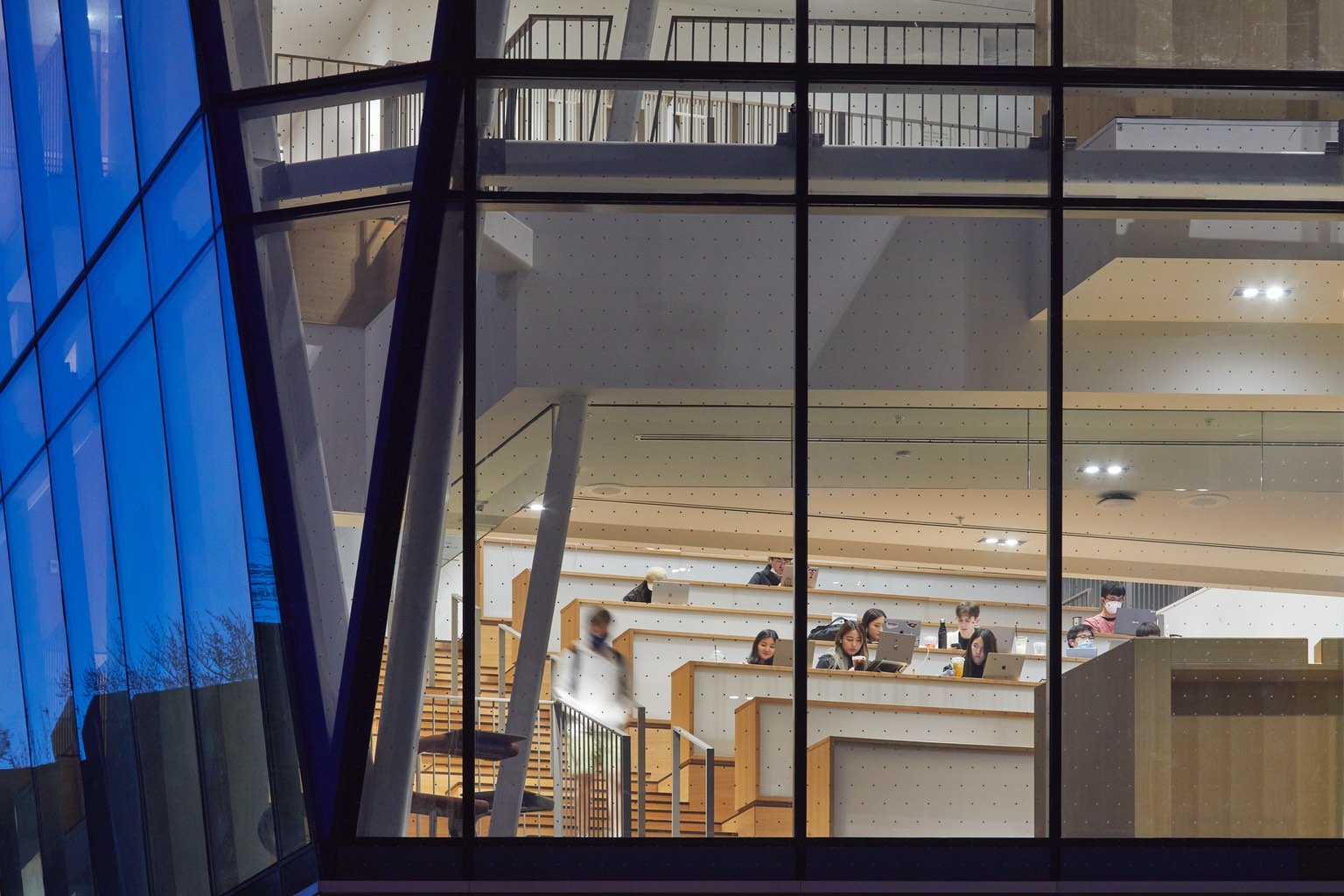 Especially for new undergrads just settling into university life, Robarts Library can often make for an intimidating presence. By the time they graduate, many of those same students may have gained an unexpected appreciation for the infamous landmark — if not come to downright love it. But that takes time.

Now, in those overwhelming early days, the inviting study halls of Robarts Common are here to help make a student’s adjustment to campus — and to Toronto — easier. Sometimes you go to the library wanting to delve into a dense classic, and sometimes you go just wanting to skim through something light.