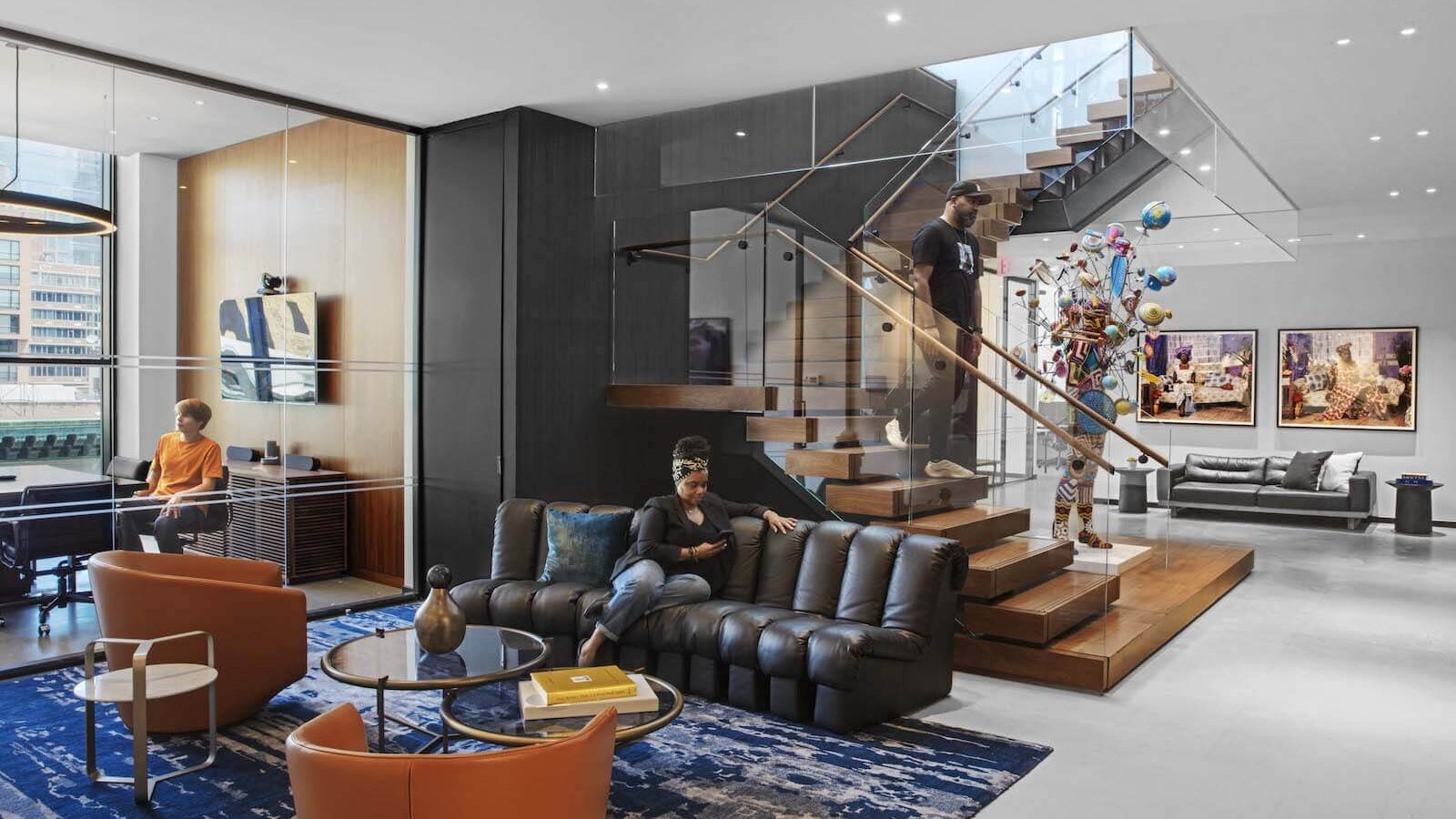 It should come as no surprise that Jay-Z is an art aficionado. In “Picasso Baby,” he name drops the Spanish Cubist as well as Rothko, Koons and Basquiat; the video for the single features the rapper facing off against performance artist Marina Abramović, at the height of her “The Artist is Present” fame. In the video for their song “Apeshit,” he and Beyoncé – enjoying the Louvre all to themselves – strike poses to rival the Mona Lisa and the Venus de Milo.

But Jay-Z’s art appreciation goes far deeper than flaunting his great taste in music videos. It’s at the heart of the new headquarters of Roc Nation, the entertainment agency he founded in 2008. The astonishing array of works by Nick Cave, Mickalene Thomas, Basquiat and more on display here demonstrate his passion for and patronage of Black artists in particular. 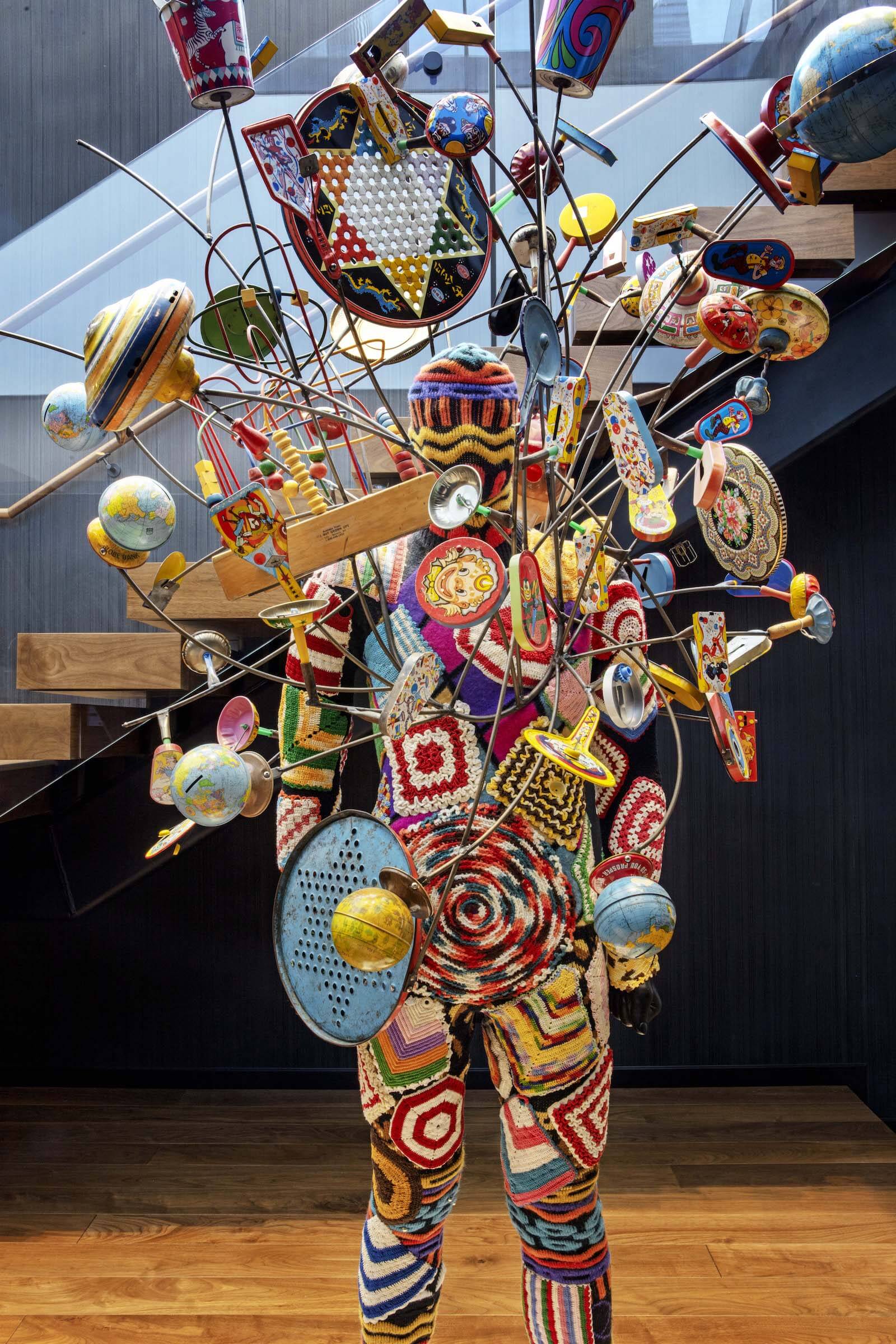 In the reception space on the sixth floor, a Sound Suit by Nick Cave stands sentry. 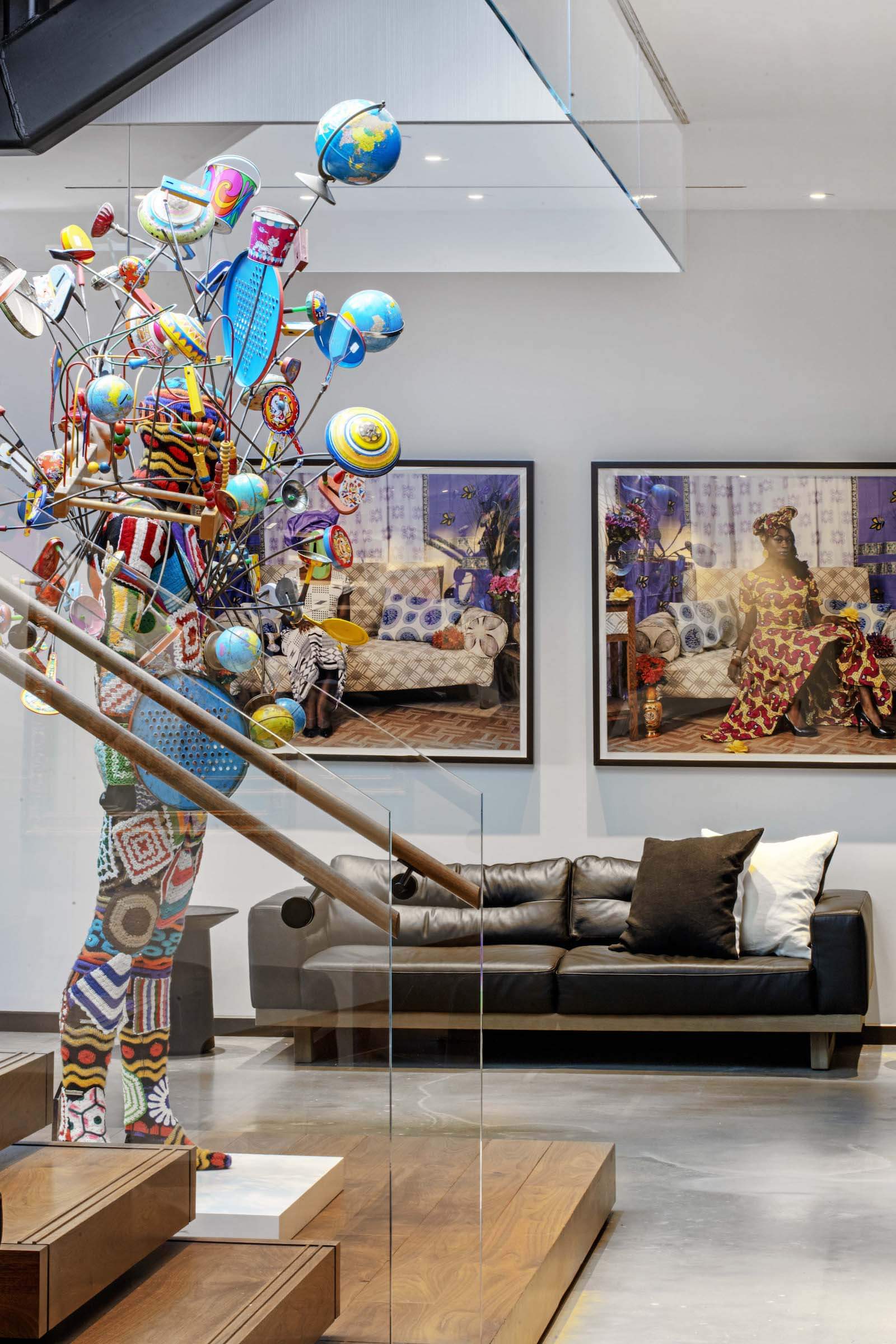 “He has fine taste,” says Desiree Perez, Roc Nation’s CEO. “He curates the office himself. He goes by area, takes his time. And it really enhances the feel of the space.” Of the calibre of art on view to everyone who works in the building and to all who enter its premises, she remarks, “We have Basquiats in there! You could be the janitor or someone’s assistant – you get to be in that space and experience everything everyone is seeing because the art is everywhere, not just in some executive area. It makes you feel like you’re part of something phenomenal.” 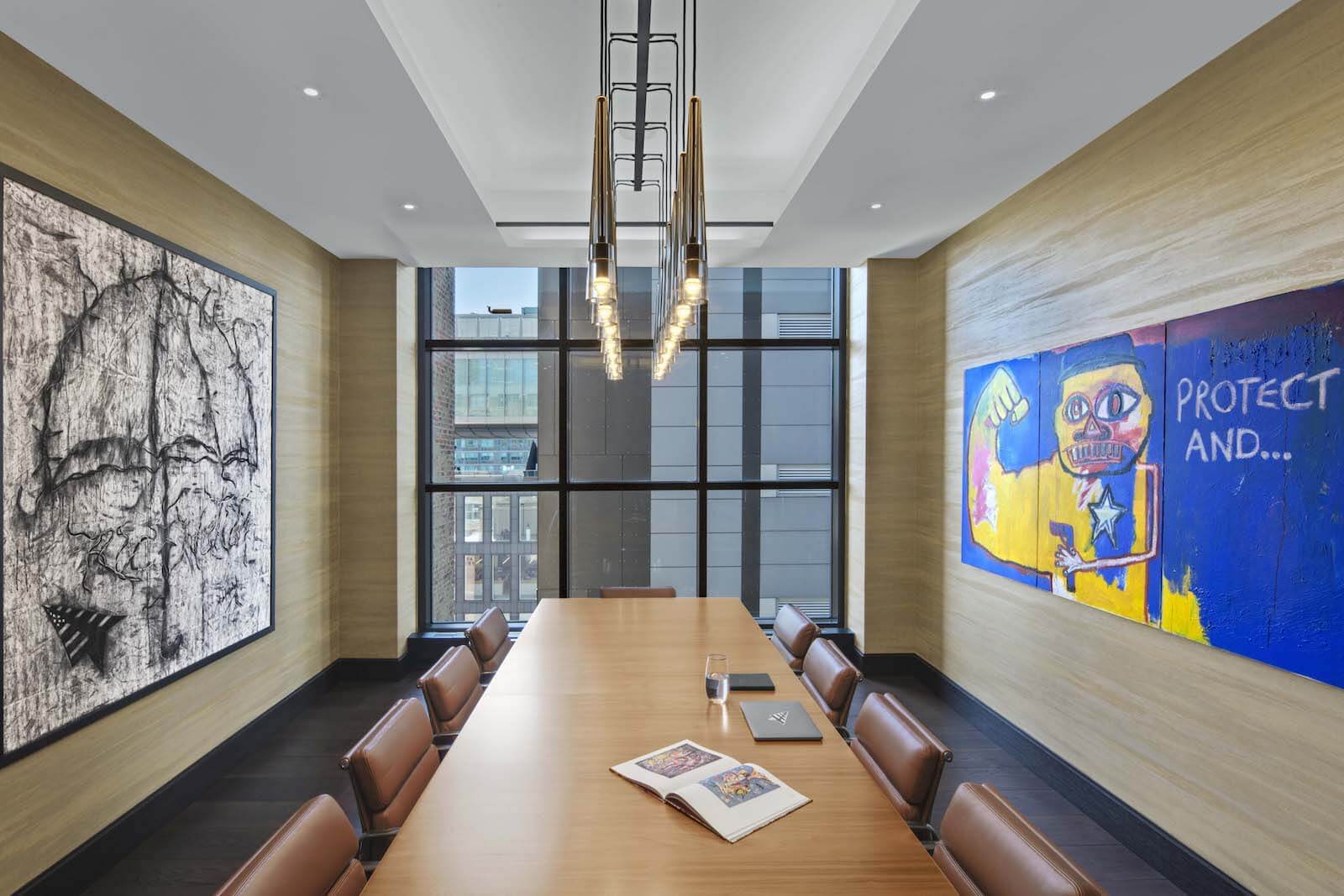 Located in New York City’s Chelsea neighbourhood, the 2,694-square-metre headquarters was designed by Jeffrey Beers International. It starts with a sophisticated ground-floor reception area in moody woods, metals and leathers. But the experience really kicks off on the sixth floor: the four office levels of Roc Nation extend from there to the rooftop. Exponentially brighter and more expansive, the sixth-floor reception is stylish yet comfy – a major theme throughout – with a black De Sede sofa atop a deep blue Reve rug and a floating glass staircase with walnut detailing. Next to the staircase: one of American sculptor Nick Cave’s incredible Sound Suits. Just beyond are two photographic portraits by Mickalene Thomas. 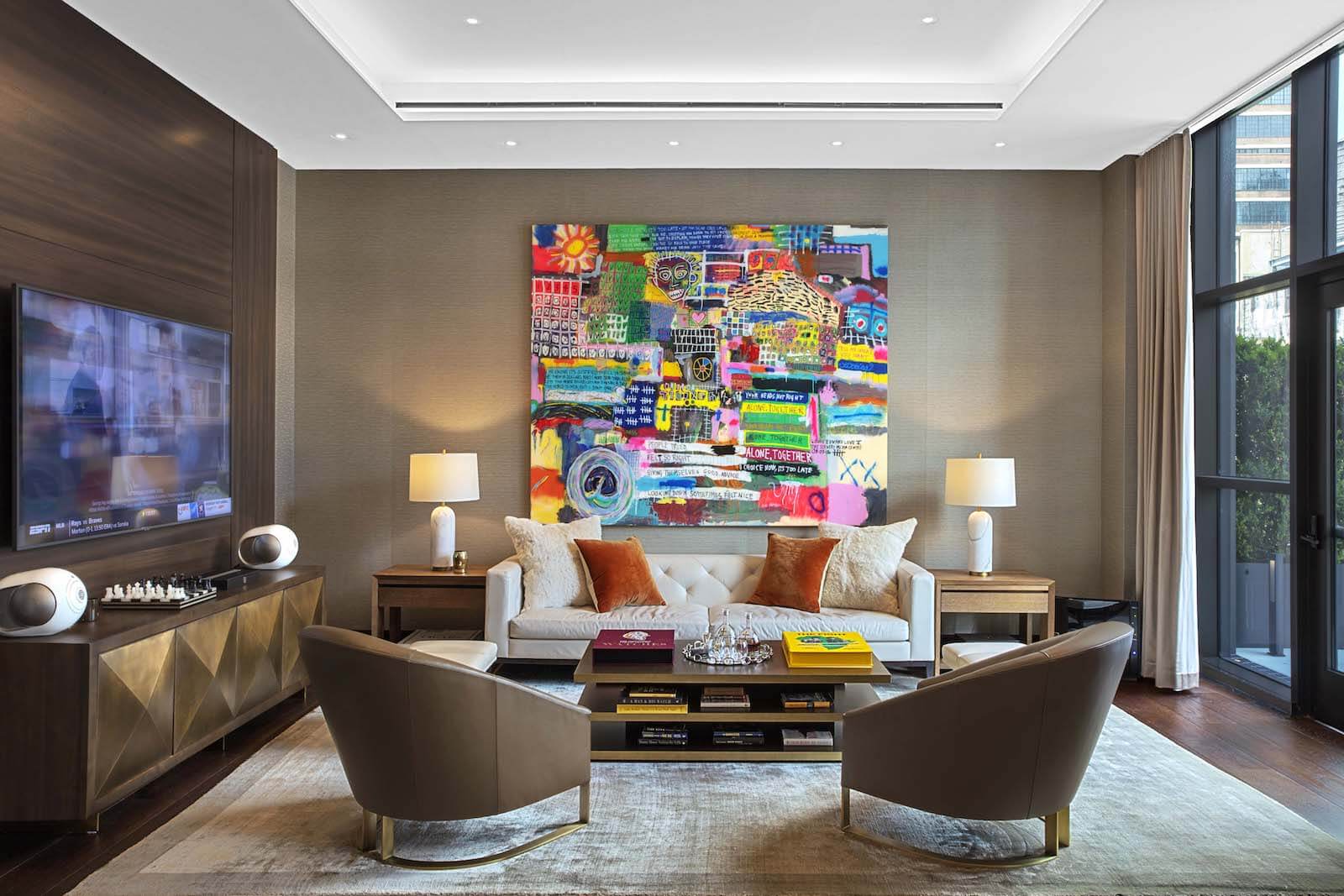 How do you design around such spellbinding works? Beers kept things simple, allowing the art to shine while also curating an eclectic mix of furnishings and textures that convey opulent luxury balanced with pragmatic openness. “We told Jeffrey that, although we have a lot of offices, we wanted everyone to feel as if they were in the same space. That there are no areas that aren’t open,” Perez explains. “And we told him, the space has to feel like who we are: a melting pot of people. We wanted to transmit that feeling of culture and lifestyle. And he did an amazing job of that.” 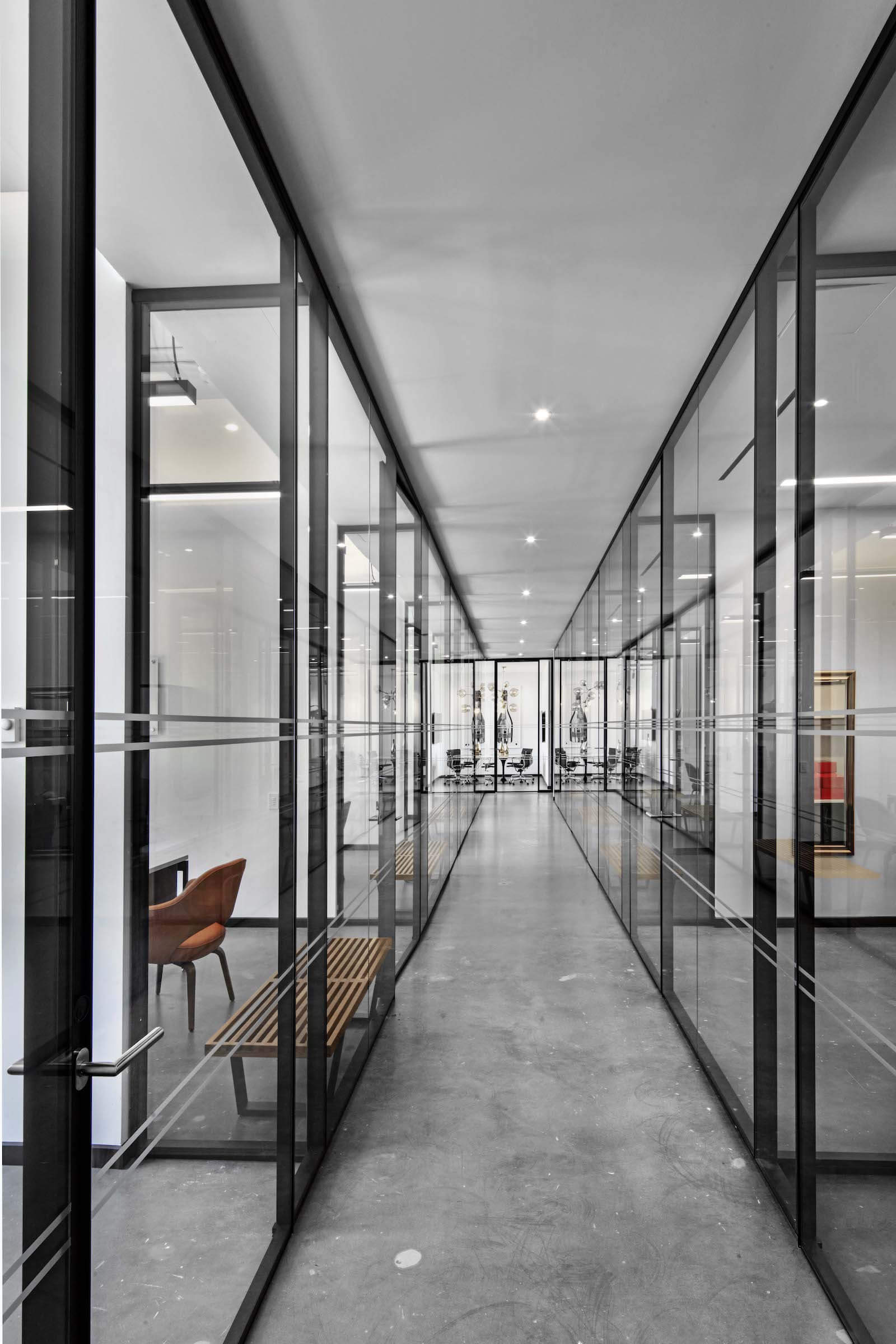 A series of offices along the corridor are fronted in Alea’s A65 glass partition system. 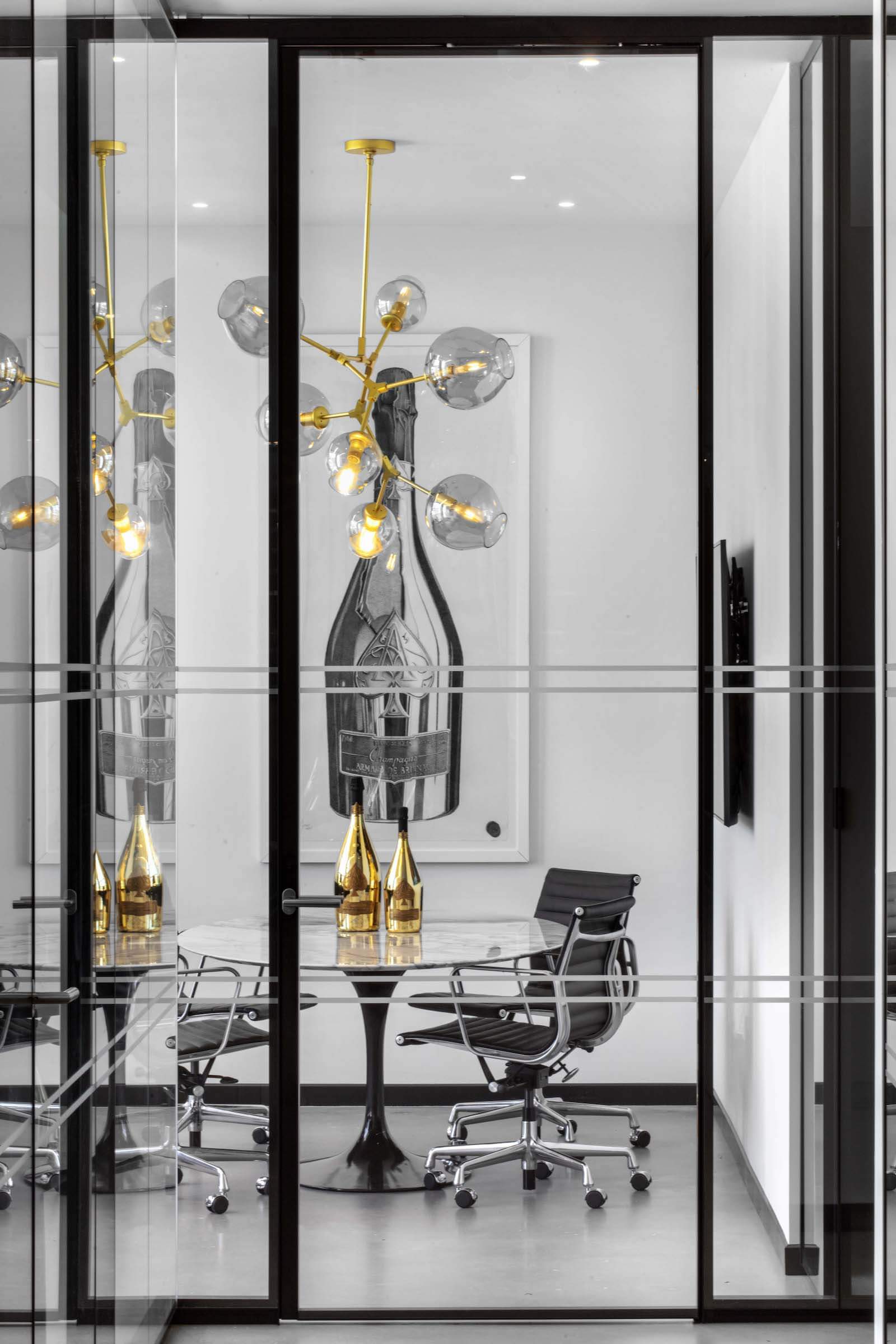 Among the variety of interiors the firm crafted are a series of glass-wrapped offices for an executive of Armand de Brignac Champagne, a Roc Nation brand; a retail shop, for Roc Nation clothing label Paper Planes, featuring a grey marble counter and a custom-designed display system; and four executive offices (and meeting rooms) tailored to each exec’s tastes.

But the most impressive enclaves are two of the communal rooms: an audio-visual media theatre (on the sixth floor) – which Perez calls the Blueprint Room – and the conference room (on the ninth floor). The former is a soundproof hub for listening to demos and plotting social media campaigns. 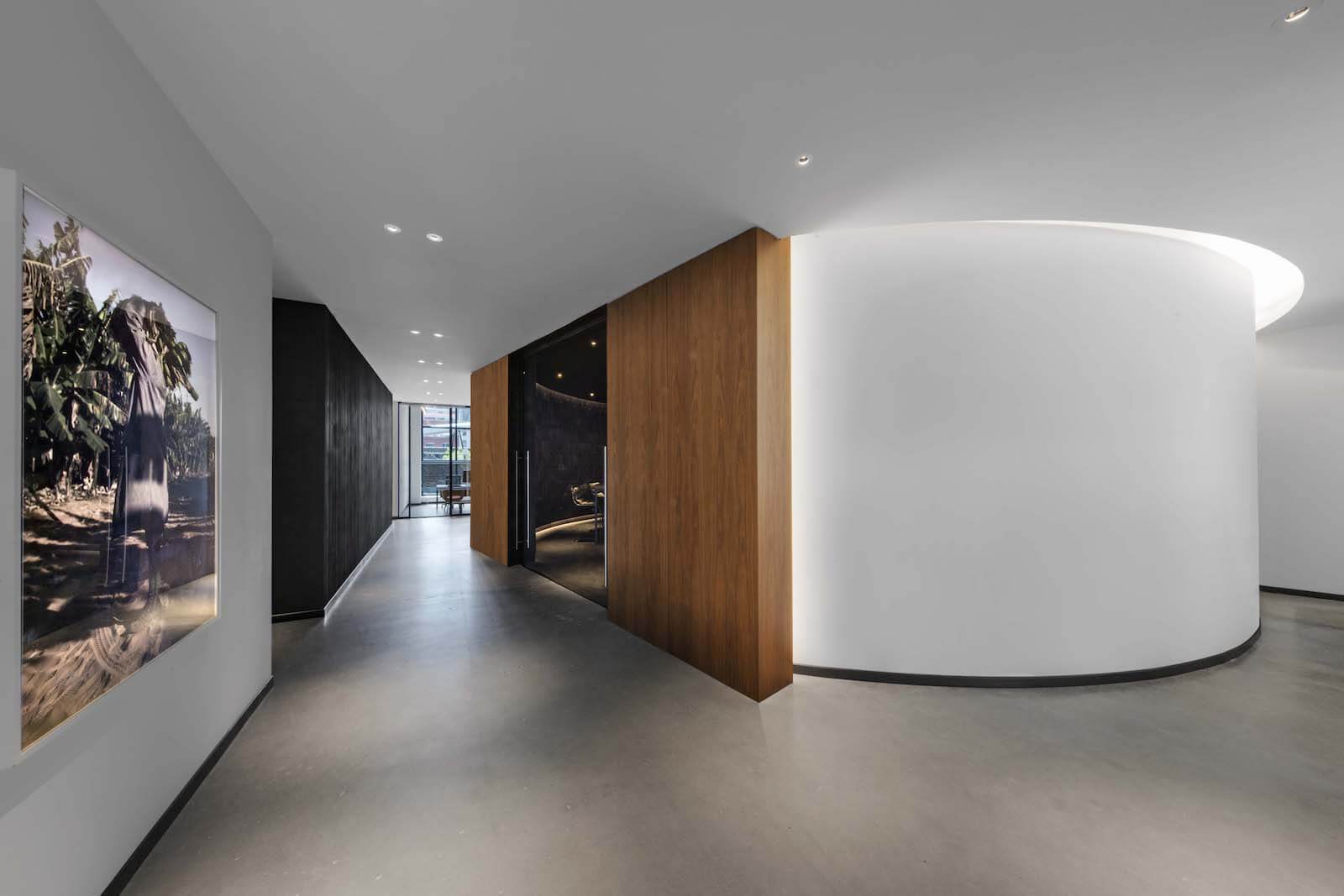 The audiovisual and social media theatre features a dramatic entry. 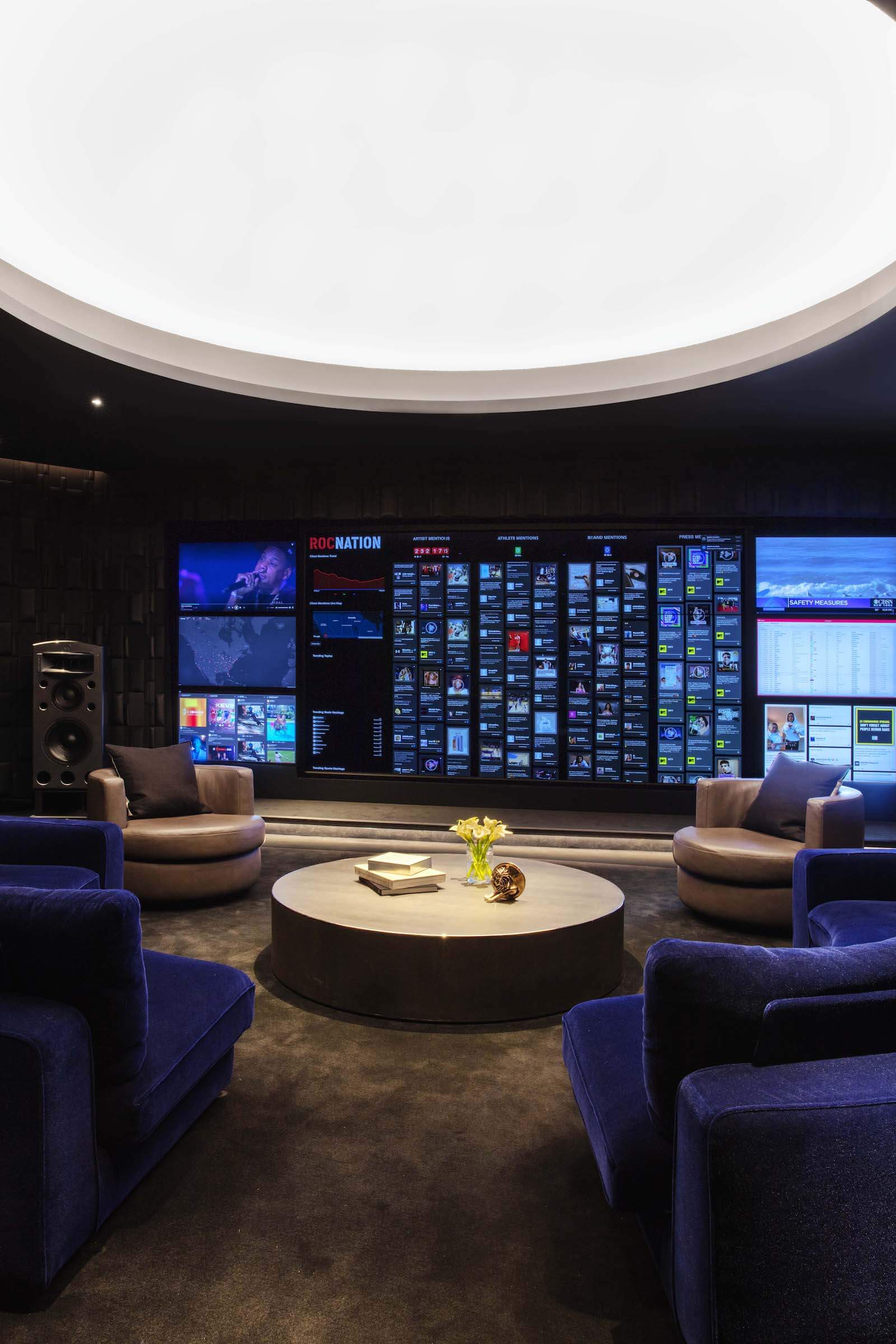 Inside, Perez asked Beers to create a powerful experience that made the data screen feel immersive.

Perez says, “I wanted it to be a room where we could present to both our clients and ourselves, and have the grandeur of the screen that amplifies what business is now – which is all digital. I was hoping for you to physically feel the proximity of the information. But also for it to feel overwhelming in its huge size. And the sound in that room – it might as well be a recording studio or a nightclub. We have artists in there who listen to music or might have a new video they want to show. Or we show someone a report about their social media landscape.” 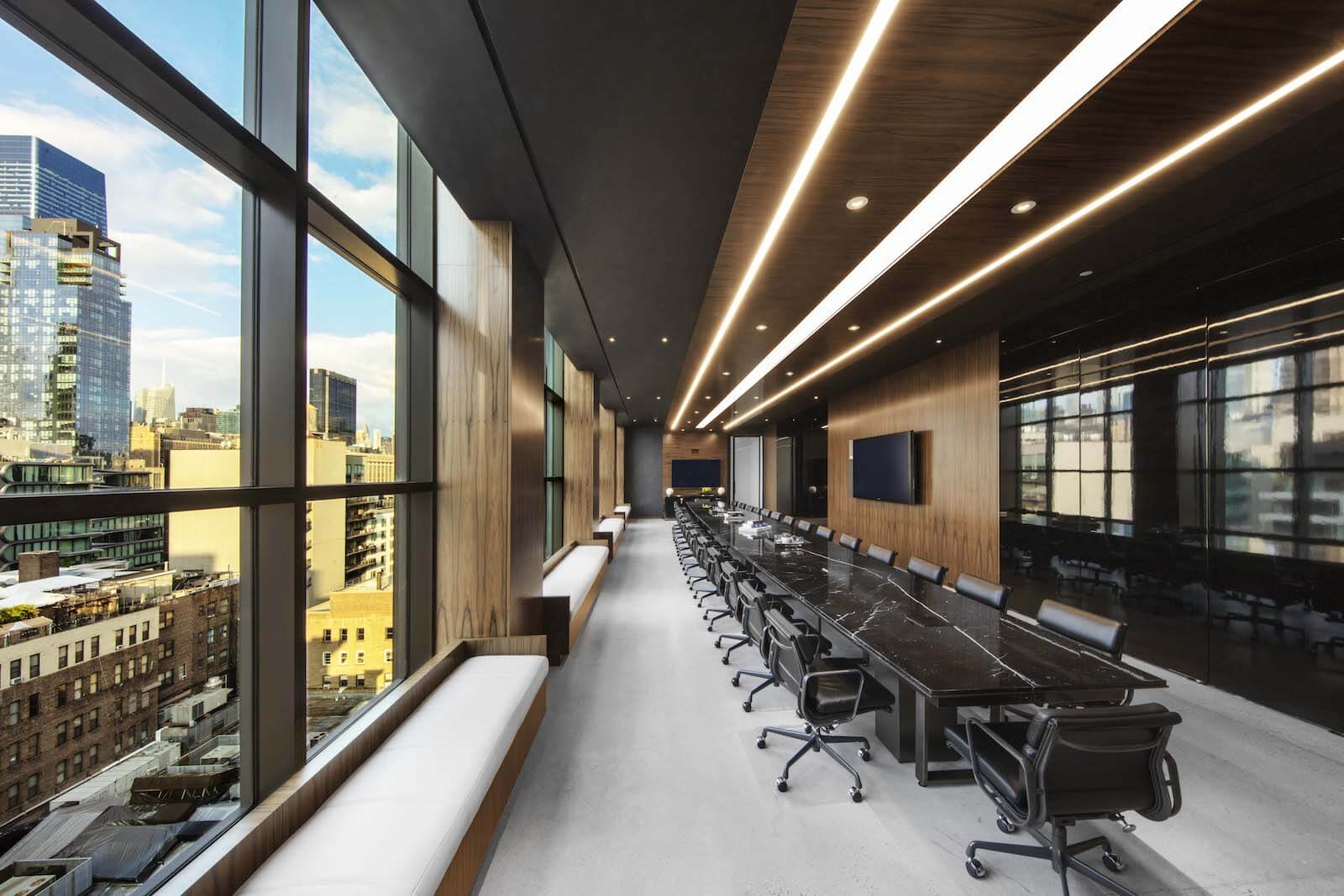 The boardroom features a custom marble-topped table and a view of the city.

The conference room was designed to accommodate Roc Nation’s growing team and to make a huge impression while doing so. It’s furnished with Herman Miller conference chairs around a massive boat-shaped Highline table, custom made by Datesweiser. “We had always had such an issue to come together,” says Perez. “That room seems a little elaborate, but once you’re in it, it isn’t. It’s big in every aspect in terms of design but still feels warm. And now with social distancing, it’s worked out perfectly – you can really spread out.” 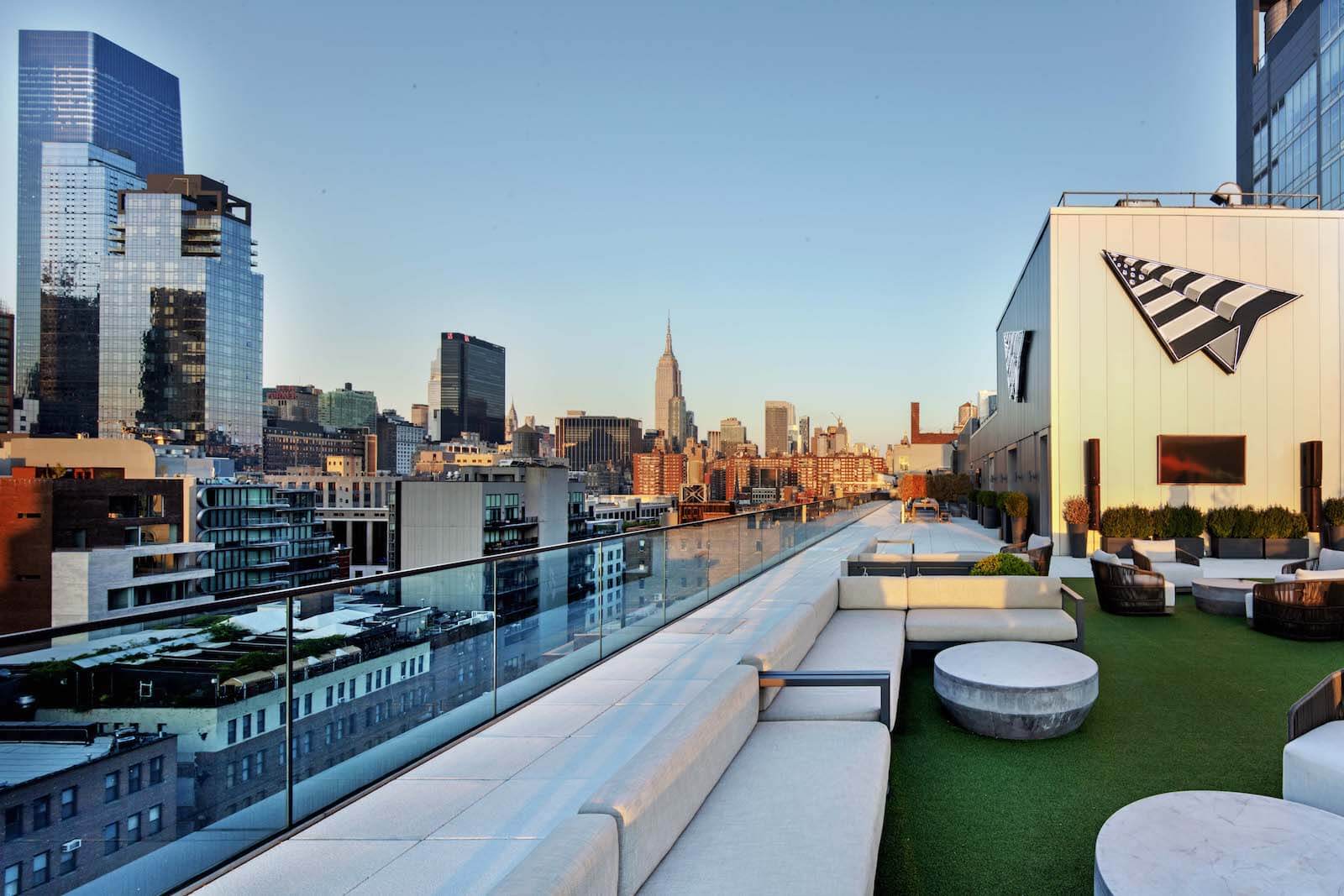 The experience culminates with the rooftop and its unparalleled views. “We’re born and bred New Yorkers,” says Perez. “When you’re out there, you have the Empire State Building on one side, the Freedom Tower on the other and the Hudson River in front of you. It’s like New York City feels so close and it makes you feel on top of the world. And we have the Roc Nation flag – it’s perfect.”

You can almost hear the song, you know the one…”Let’s hear it for New York / concrete jungle where dreams are made of….”