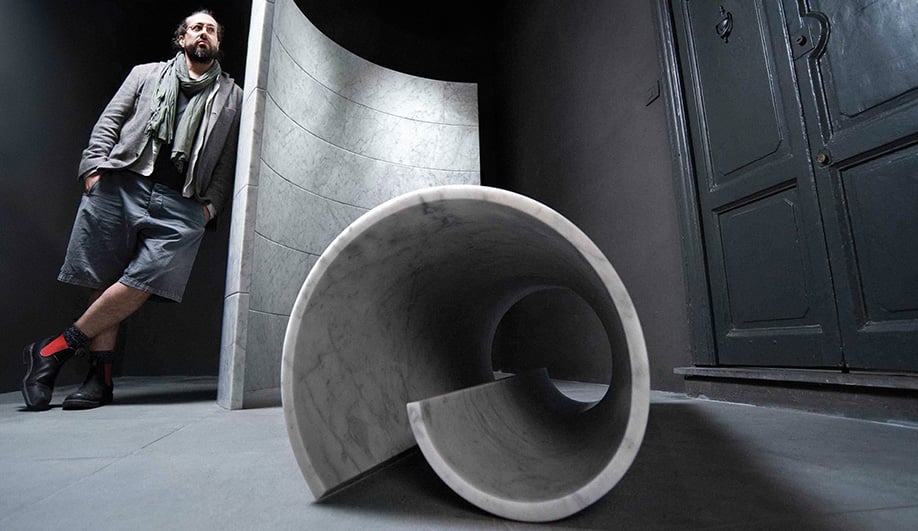 The 40-year-old designer leans on a curving tile wall, a piece from his new Soft Marble collection for Italian manufacturer Salvatori. 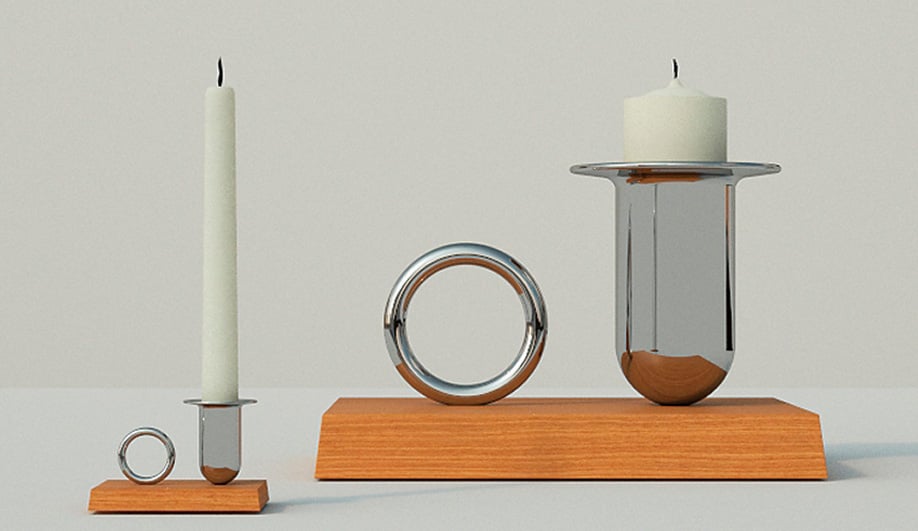 Candle holders, designed for Estab­lished & Sons and shown in Milan this past spring. 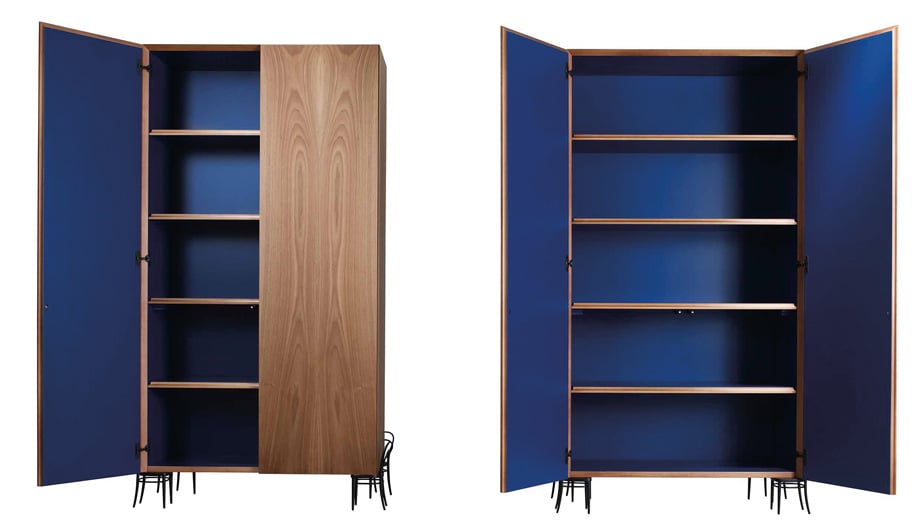 The 56 Cabinet for Adele‑C balances on miniature Thonet chairs cast in steel. 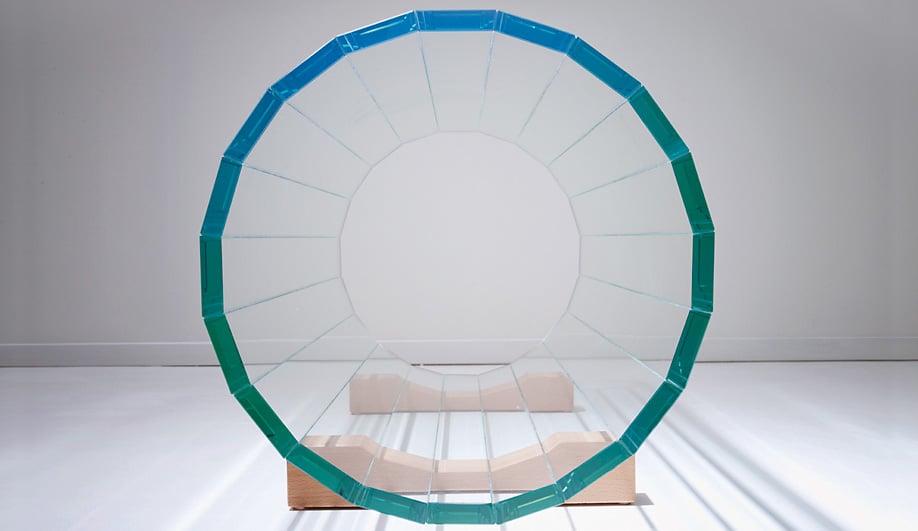 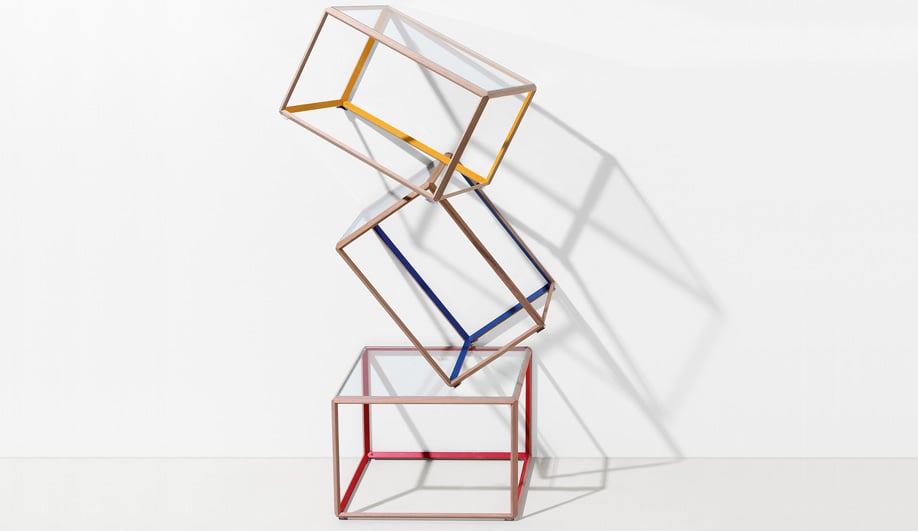 Glass and wood coffee tables, part of the Gradoº collection for Molteni&C. 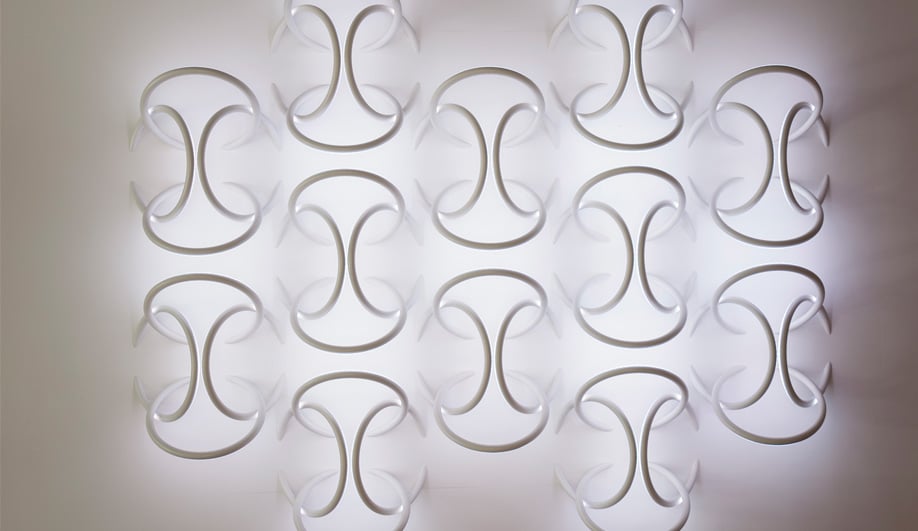 Wallpiercing, an LED sconce for Flos, changes a room dramatically when arranged in clusters or patterns. 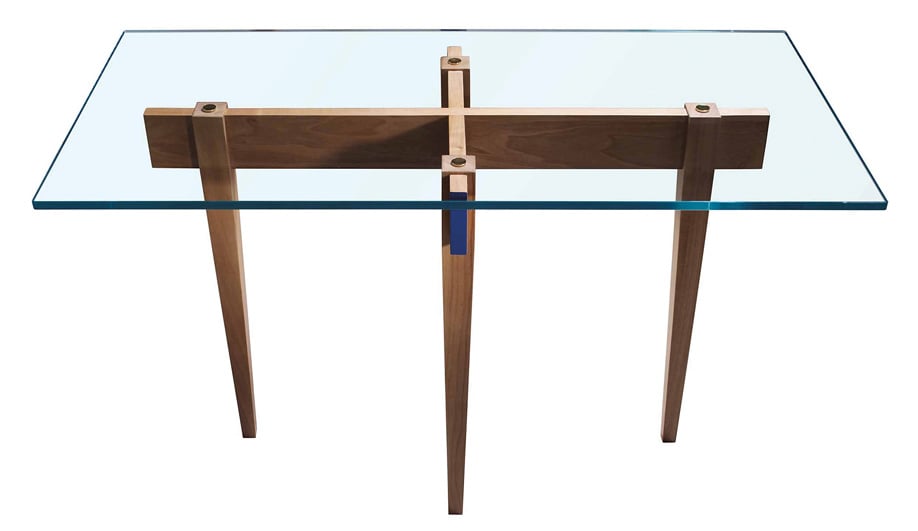 The Round Table, for Adele-C, also comes in this less Arthurian rectangle version. The base is made of Italian walnut. 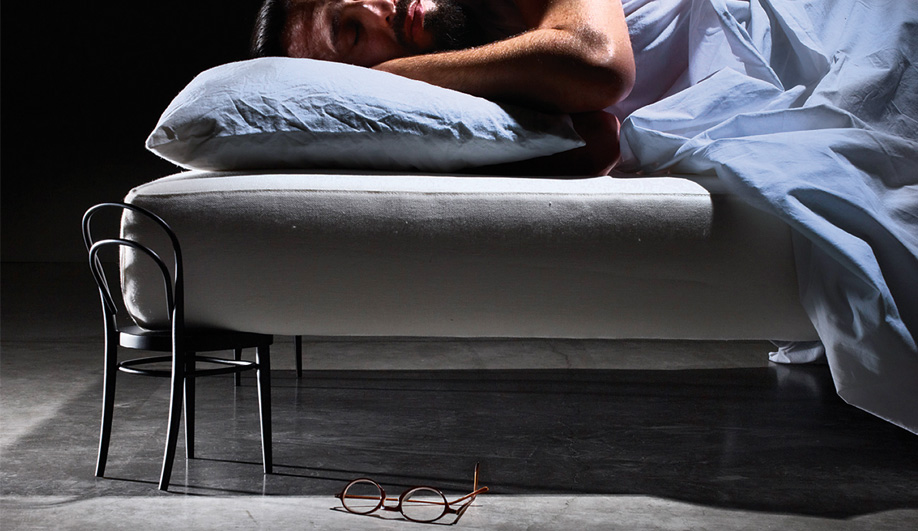 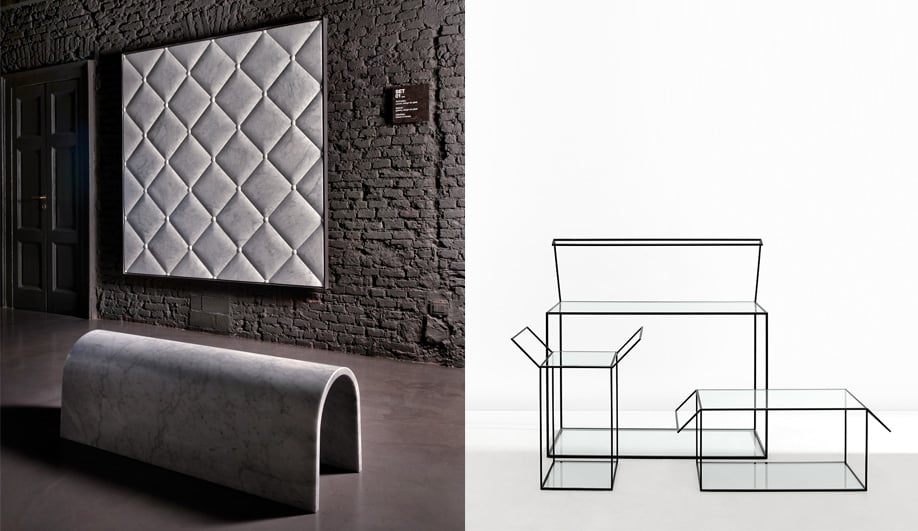 Part of the Soft Marble collection for Salvatori, the Cuscini tiles are inspired by satin mattress ticking, and the bench curves like a sliver of butter. 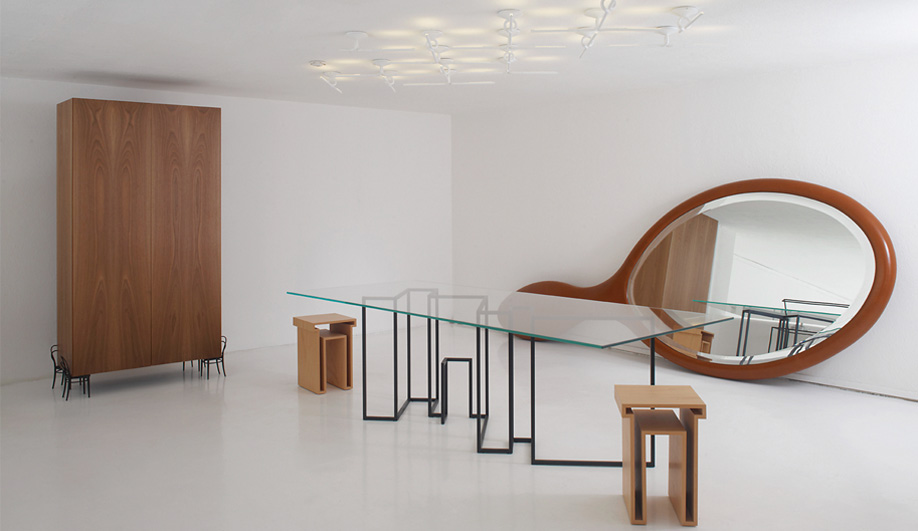 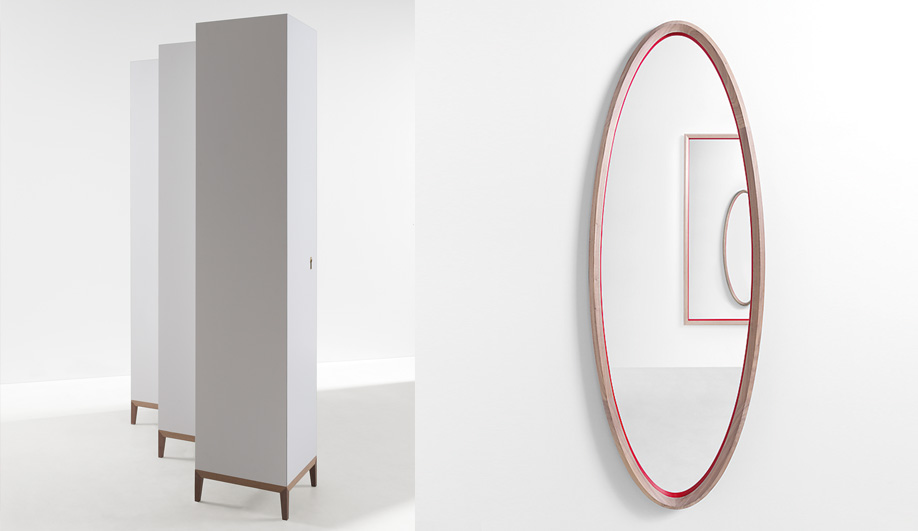 More than a dozen pieces make up his Grado° collection for Molteni&C, among them this storage system and oval mirror.

At once labelled a conceptual artist, a designer, a metaphorical linguist and a philosopher, Ron Gilad – like his work – is difficult to define. He himself provides little help in the matter: “I say I’m still looking,” says the bearded and bespectacled Tel Aviv native. While he has built his repertoire through one-offs and limited edition objects for which he is designer, producer and often distributor, he has recently started to collaborate with major manufacturers of furniture, lighting and tiles. This year’s Milan fur-ni-ture fair found him displaying, with his characteristic ease, new work not only for respected avant-garde design galleries, but also for such lofty companies as Established & Sons, Salvatori, and Molteni&C.

The creations range from benches, storage units, side tables and mirrors to a charming candle holder for Established & Sons, with a wooden base shaped like an A-frame house. For Flos, he created Wallpiercing, a white LED sconce that appears embedded right into the wall; it’s most impressive when mounted in groups and patterns. Each of these new products reflects Gilad’s love for simple geometric forms whose purity and linearity imbue his work with a sense of flat drawings come to life.

A former teacher at Shenkar College of Engineering and Design in Israel and at the Pratt Institute in New York, Gilad has a gift for speaking in rich metaphorical terms that seem tailor made for the job of shaping young minds. “I am not out to change the world, but I do enjoy changing our perception of it,” he explains. This narrative approach is immediately apparent in a collection he recently completed for Tuscan marble company Salvatori: Soft Marble challenges our notion of materiality, with its highly sculptural objects that, though made of Carrara marble, seem light and malleable. His Cuscini tiles riff on satin mattress ticking, while the Girella bench arcs like a curl of soft butter.

Balancing the familiar with the foreign is what infuses Gilad’s work with such visual intrigue. By deconstructing each piece to its basics, he prompts us to look again at the objects, rituals and environments that shape our daily lives. “I don’t have a fixed recipe,” he admits, “but I always have a certain goal in mind: to reduce my cooking stock to the purest broth possible.” It seems perfectly fitting that he comes from a family of seifensieders (soap makers); his meticulous approach and studious manner convey a natural predisposition to pare things down to their cleanest forms.

Born in Tel Aviv – where he has recently returned following nearly a decade in New York – he studied industrial design at the Bezalel Academy of Arts and Design in Jerusalem before establishing his studio, Design-fenzider, in Brooklyn in 2001. He quickly gained a reputation as a nonconformist unmotivated by potential commercial success. However, with the recent close of Designfenzider and a growing list of collaborations with prominent Italian companies, he no longer fits neatly in the artist-as-designer box. “For all the years I had my own little company, I was scared of the world of commerce, and I allowed myself to say sentences like ‘I am a free spirit, and I do what I want’,’’ he recounts. “I now find it more intriguing to pursue my research through the commercial world, because these kinds of completely abstract ideas don’t exist, or are very minor, in the history of design.”

At age 40, Gilad, it seems, has finally grown up, though he still has a twinkle in his eye. “He has a reputation as an artist,” remarks Molteni&C’s marketing manager, Peter Hefti. “But he also has a strong interest in the materials being used and the technology behind each product.” For Molteni&C, Gilad produced Gradoº, a collection of tables, mirrors, shelving units and storage systems that was much lauded at this year’s Milan furniture fair. Two glass and steel-framed side tables with a matching console from the series have the profile of cardboard boxes whose lids have sprung open; and the 45º Contenitore cupboard system balances on short wooden legs, its zigzag profile recalling accordion bellows.

These days, with a host of projects in the works, including new rugs for Nodus, Gilad is full of poetic self-reflection. “When I was younger, I was more strict in my ideas; now I’m trying to be less cocky,” he admits. “Over the years, we develop certain sieves in our brain. They start with very, very small holes, and slowly the filters become less rigid and we allow more things to pass through them.” Designer? Artist? Philosopher? Perhaps in our efforts to define Gilad, we would do well to be less strict and simply delight in the way he passes through all three.