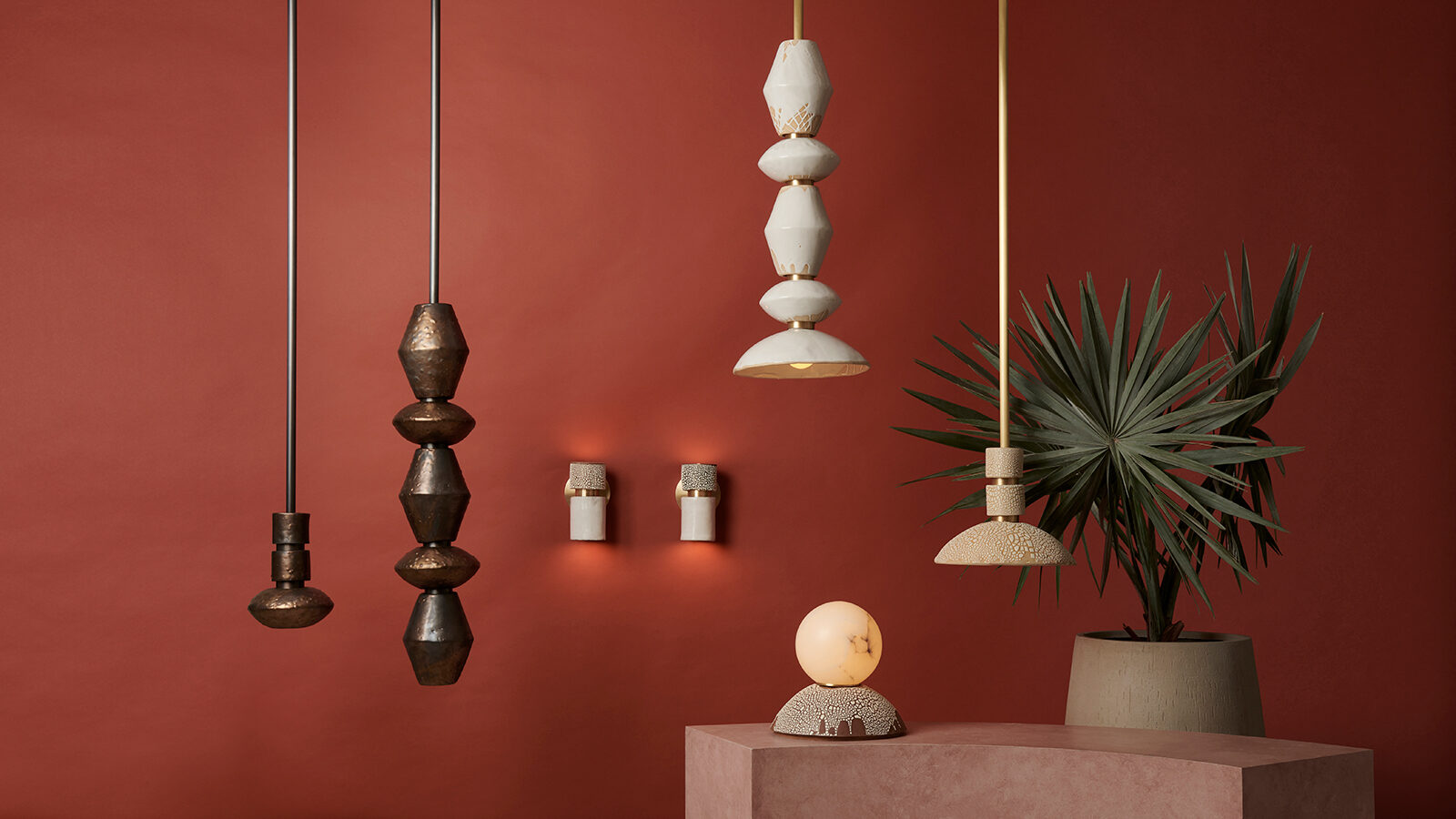 With the Pilar lighting series, the two Brooklyn-based studios craft a compelling collection that expertly balances materials and geometric forms.

As studio neighbours in Brooklyn for six years, lighting designer Rosie Li and ceramicists Jennifer Fiore and Nina Lalli of MONDAYS formed a mutual affinity for and appreciation of each other’s work. Now the brands have joined creative forces to develop Pilar, a lighting series that beautifully blends the two studios distinct expertise and approach.

Since establishing her eponymous studio with engineer Philip Watkins in 2015, Li’s creative output has consistently upended traditional lighting design. Take her Bubbly series, a soap bubble- and botryoidal hematite-inspired collection that explores naturally occurring attractions and cluster patterns to stunning effect. Or the Inez collection, whose spiky hand-pleated copper shades reflect the architectural integrity of fan palm leaves observed during a hike in the Yucatán forest. While wildly individual, each of Li’s designs do share a common trait in that they are physical expressions of the designer’s effort to find the “underlying links” between science, mathematics and nature. 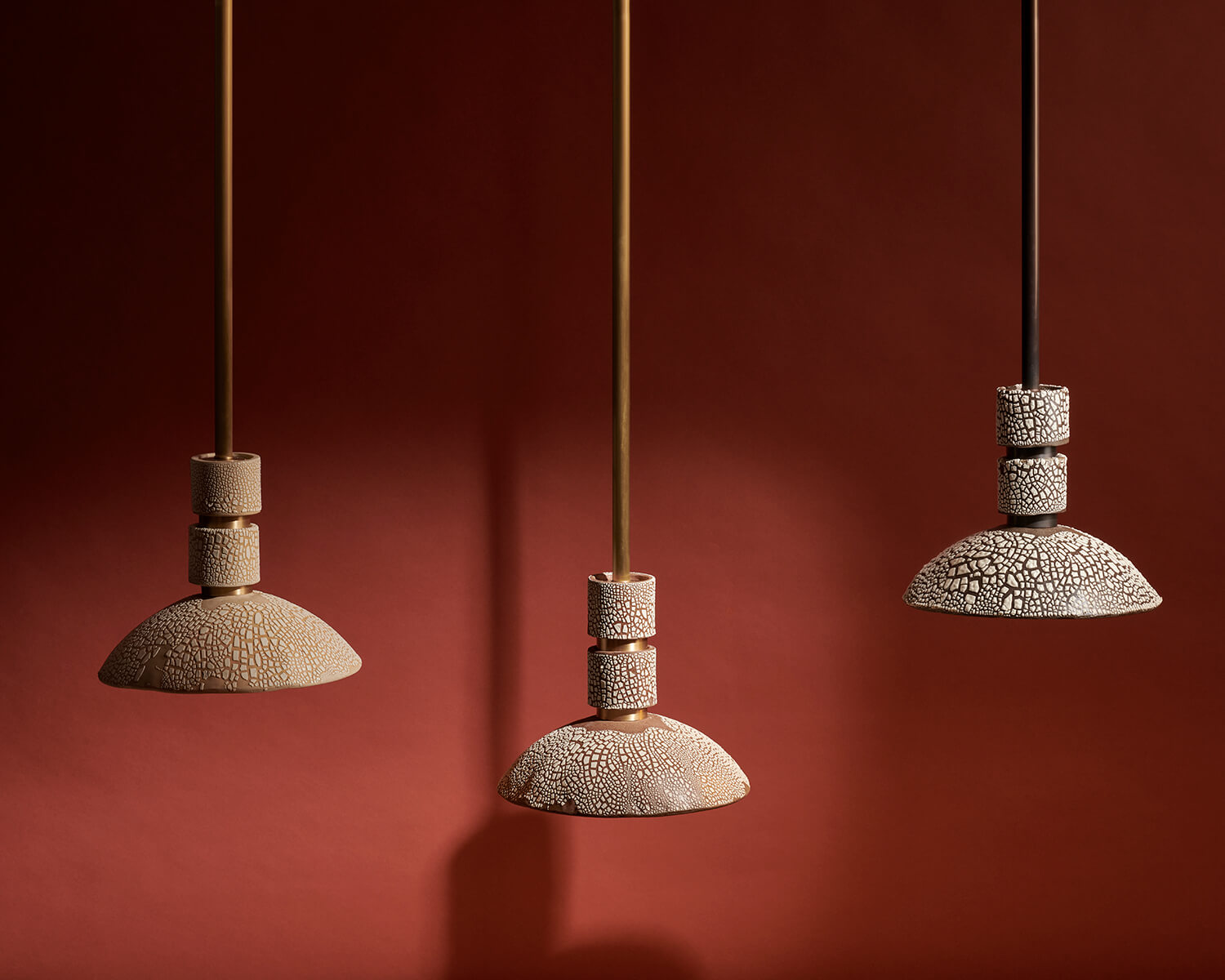 For the Pilar lighting series collaboration both Fiore and Li were informed by the “quiet strength” of the Endless Column by Romanian sculptor and artist Constantin Brâncusi. The ceramicist had already been making vessels based on the artist’s iconic work and both Li and Fiore had recently spent time in Brâncusi spaces – at his reconstructed studio near the Pompidou and at the Philadelphia Museum of Art, respectively.

Starting with some basic geometric shapes that Fiore had been developing for years, Li worked with the ceramic artists at MONDAYS – the atelier Fiore and Lalli founded in 2012 after meeting and becoming fast friends and creative supporters at a Monday evenings ceramics class – to refine them just enough to better transition into compelling sculptural lights. Their process was as malleable as the clay they were crafting with: Li approached the series with some shape combinations in mind, but as Fiore continued to make more of each form those arrangements changed, with each ceramic “bead” allowing for near-endless configurations. 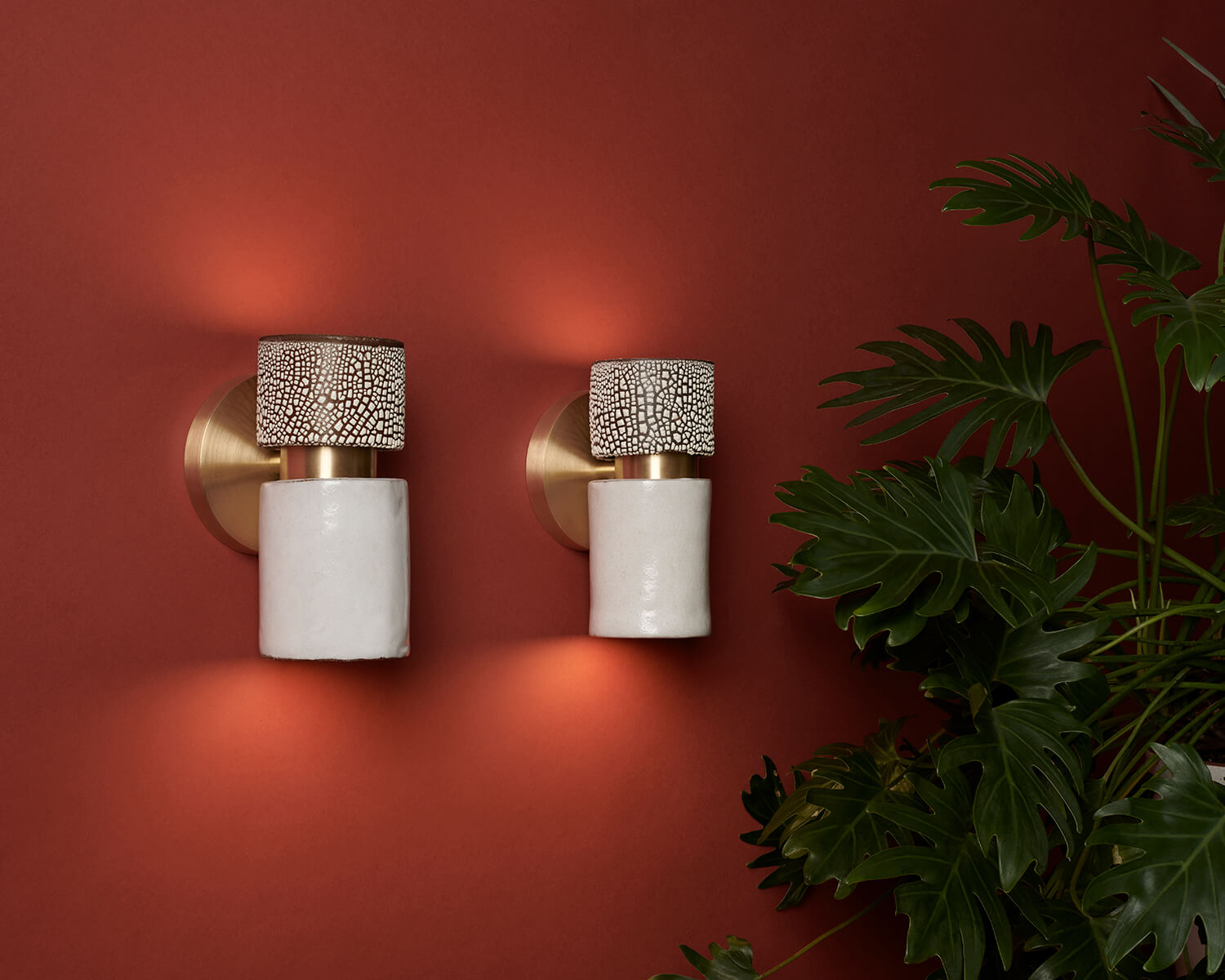 The four basic geometric shapes behind the Pilar lighting series – cylinders, cones, saucers and half-circles – also changed slightly as things progressed, with the ceramicists streamlining the silhouettes to make them “as clean and elegant as possible, while still retaining a handmade feel” says Fiore, who also notes the several rounds of technical refinements it took to get the clay objects to work with the machined parts. For Fiore, working with the rigid mechanical demands of lighting for the first time meant learning to slow down and “be more patient and methodical than I ever am in my personal work.” 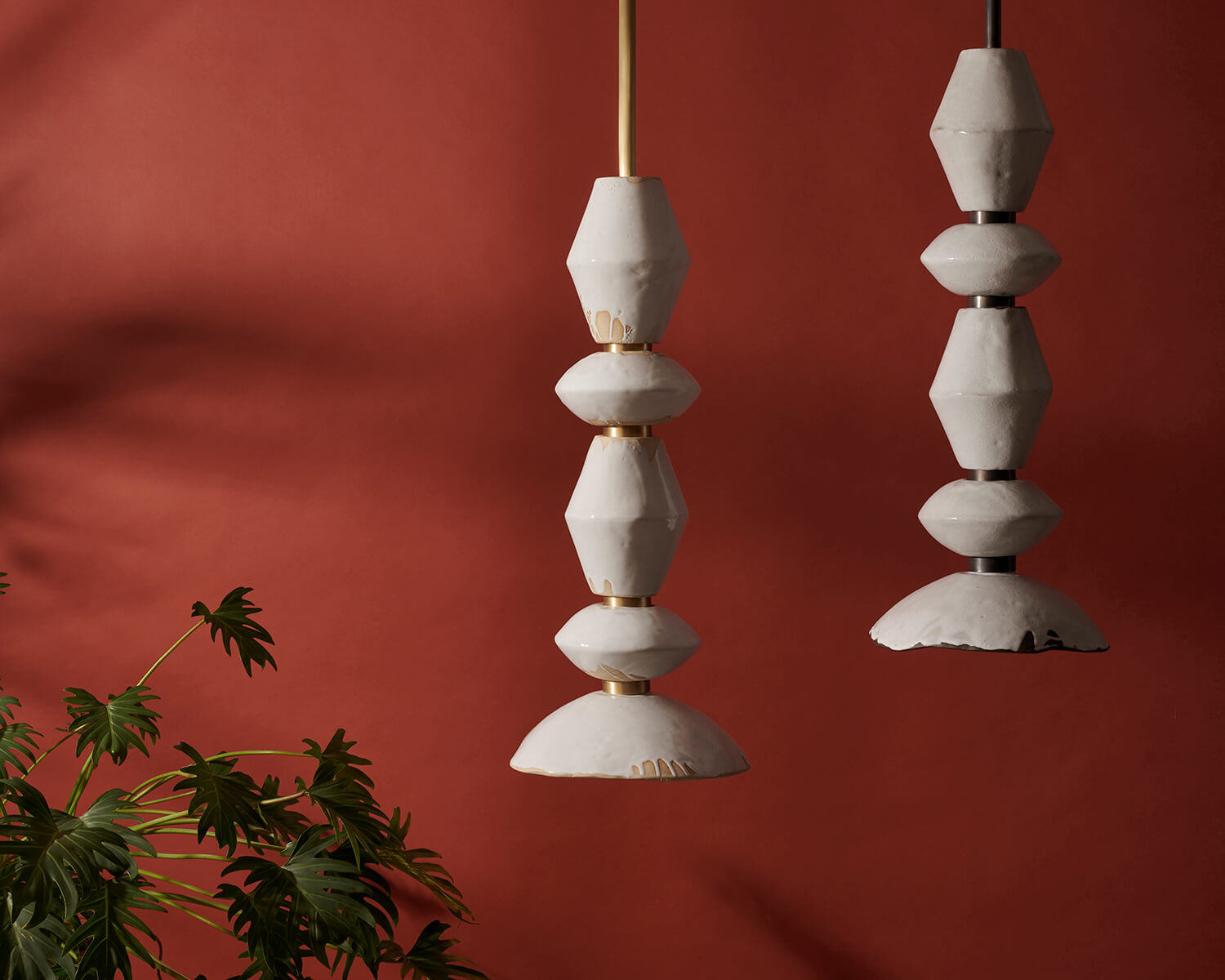 Where lighting was new to Fiore, clay was new to Li and also took some getting used to. “We keep tight tolerances when working with metal, yet working with clay means giving up some amount of control. From drying to glazing and firing, clay transforms at each step and often in unpredictable ways” Li says of the method.  “Ceramics shrink and change a lot at every step of the process, so figuring out moulds that account for that was one of the biggest challenges,” notes Fiore.

Comprised of seven pieces, the Pilar lighting series eloquently combines MONDAYS raw yet refined hand-built clay forms with Li’s rigorous brass building systems in a way that allows both aesthetics to shine. The organic nature of MONDAYS hand-thrown clay creations highlights the beauty of irregularity and imperfection, whereas Li’s structured solid brass metalwork has an elemental integrity. Together, the two create an intriguing balance of materials, shapes and geometries. “Each lamp is a combination of forms and materials we have each been working on in our individual practices for years,” say Fiore. “I think the contrast between our two styles – Rosie’s light and elegant, mine much wonkier – makes the final pieces more surprising and interesting than they would be otherwise.” 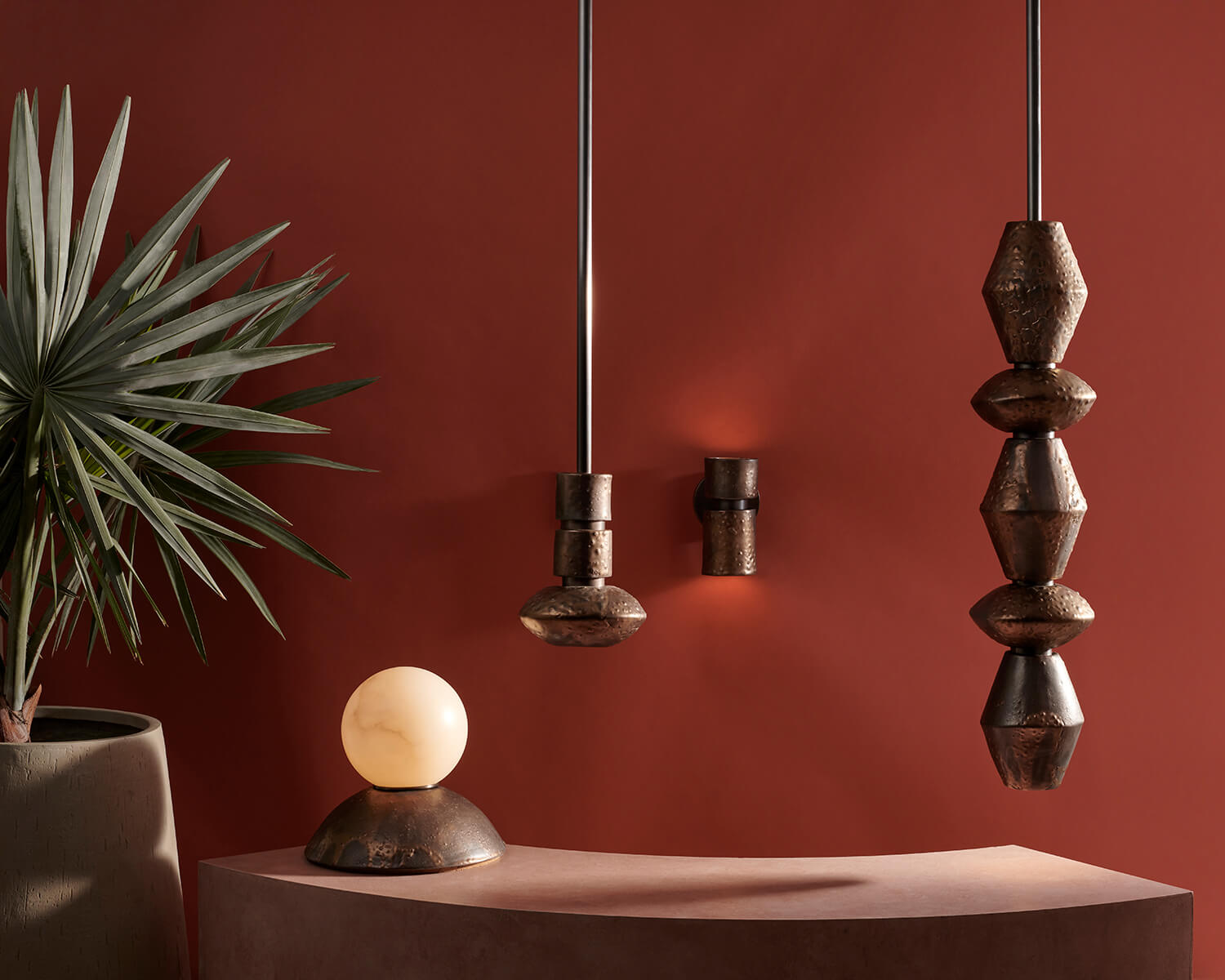 With the Pilar lighting series, the two Brooklyn-based studios craft a compelling collection that expertly balances materials and geometric forms.