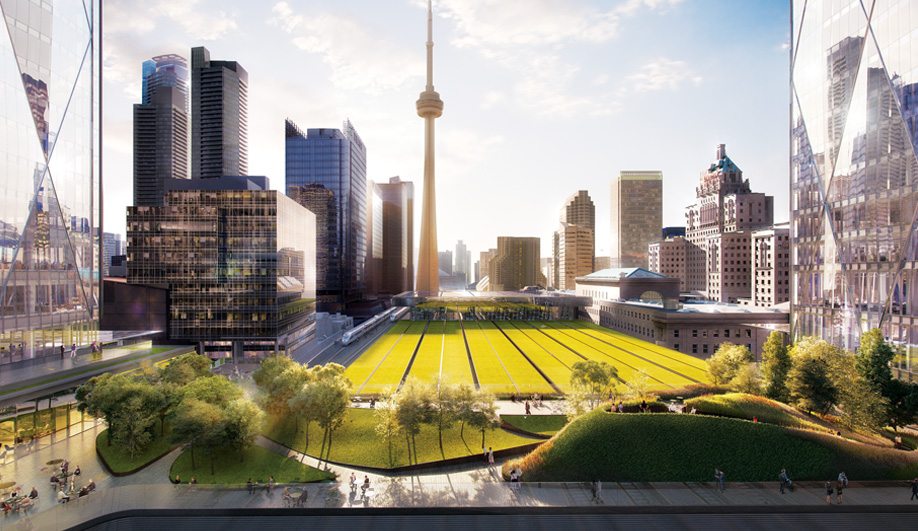 From Toronto to London, bold visions for green spaces are transforming the big city. Here are six beautifully designed public and private parks. 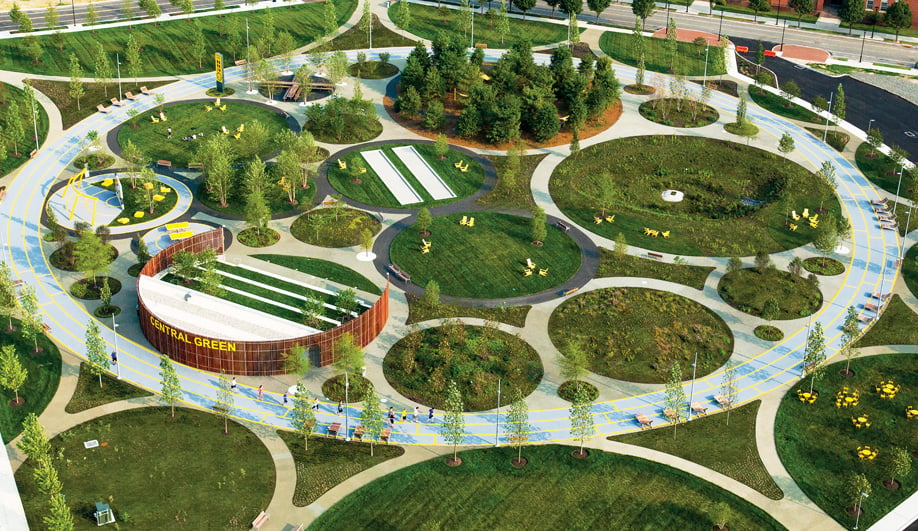 1 Navy Yards Central Green in Philadelphia by James Corner Field Operations
Redeveloped as a 485-hectare office zone, Philadelphia’s Navy Yards now has a park designed to draw workers away from their desks and into the fresh air. Its two hectares are ringed by a “social track” for walking or running, and, within a network of circular green areas, there are amenities that encourage group play, including a bocce court, table tennis and TRX training equipment. Lounge spaces, including a tranquil grove filled with bright yellow hammocks, are open invitations to kick back and relax. A spot for food trucks to pull up also adds to the allure of getting outside over lunch rather than remaining stationary at a desk. 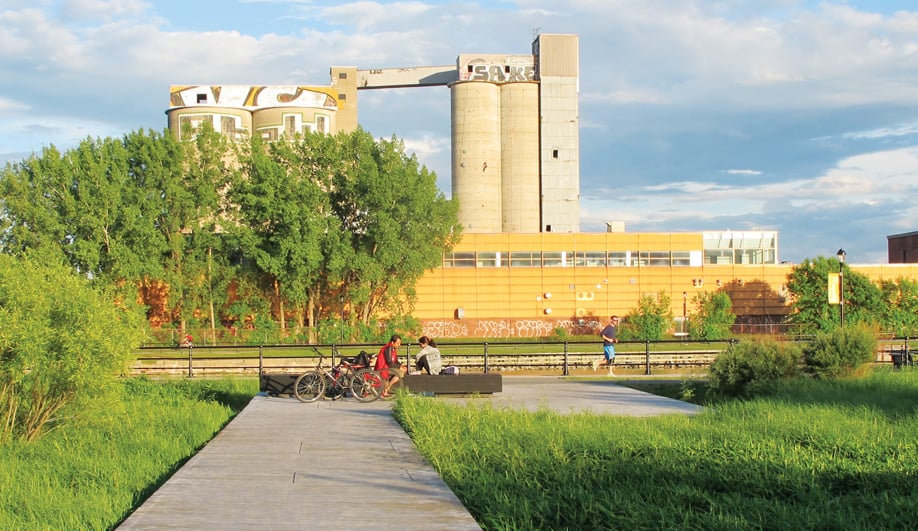 2 Bassins du Nouveau Havre in Montreal by Civiliti
The ongoing residential master plan near Old Montreal, Bassin du Nouveau Havre, is now filling in with parkland that includes playgrounds equipped with jungle gyms and swing sets. It also incorporates a 4,000-square-metre area, accessed via boardwalks, that functions as a bio-retention basin, capturing rainwater and returning it to the water table without first being wastefully channelled through the city’s sewer system. Some 24,000 semi-aquatic native plantings cover the top of a one-metre-thick layer of soil substrate that lets dirt do what it does best: suck up moisture and let gravity take care of the excess by trickling into the nearby retention basins. 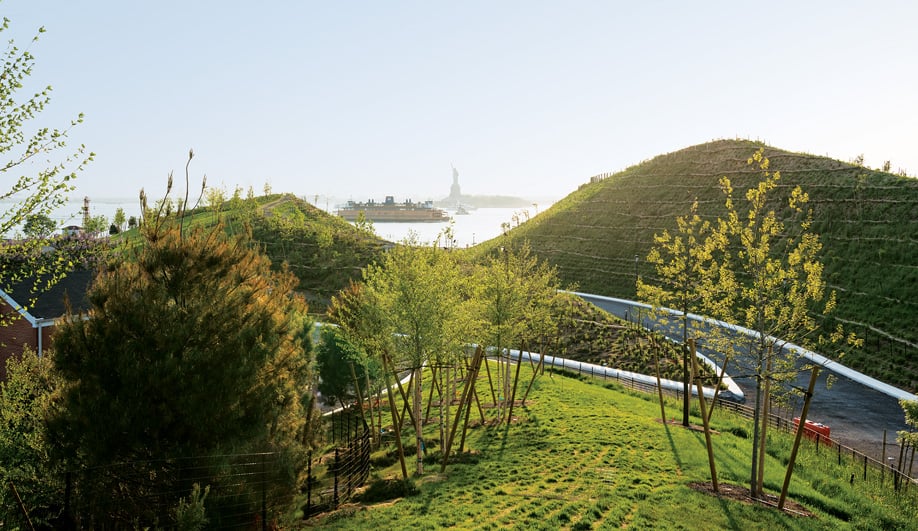 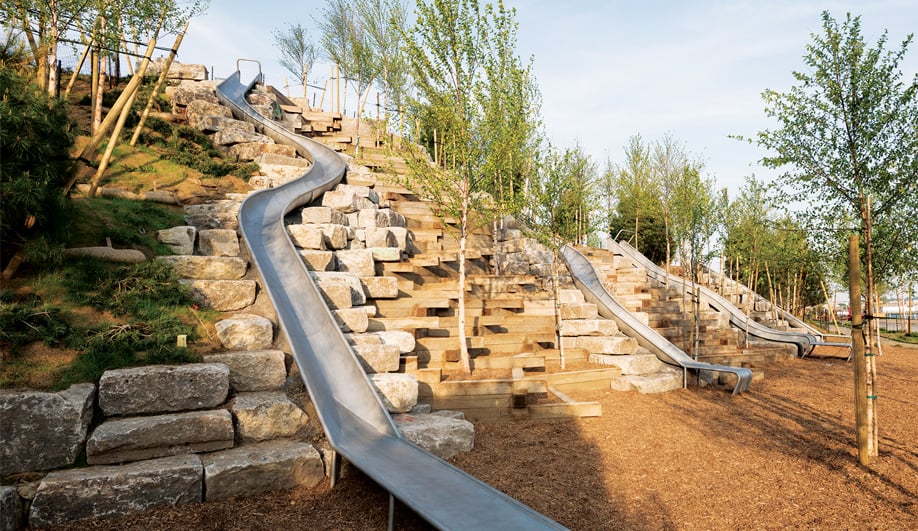 3 Governors Island in New York by West 8
Though it’s just 730 metres off the shore of Manhattan’s southern tip, Governors Island has become an escapist’s paradise, especially for families. A former military base, the 70-hectare island is largely made up of infill from the Lexington subway line built in 1911. Rotterdam’s West 8 has redeveloped the lion’s share of the island in a two-phase project that wrapped up in July with the opening of the Hills.

Now, a rolling landscape made from more recent construction debris rises 20 metres at its highest point, offering panoramic views of the city’s skyline and providing natural protection from rising tides. Visitors can meander the tree-covered bluffs along winding pathways, or climb a slope of reclaimed granite seawall blocks, or rocket down one of the four jumbo slides.

4 Bay Park Centre in Toronto by WilkinsonEyre and Public Work
A pair of office towers is rising up next to Toronto’s Union Station. Designed by WilkinsonEyre of London, the firm felt that such intense densification required equally ambitious landscaping. But where to put it? As in many cities, parkland is hard to come by in the downtown core, so building parks within or around existing structures has become the norm. With Bay Park Centre, a railway corridor that runs alongside the development provided an opportunity to implant green space via a pedestrian bridge reaching over the lines. The 110-metre overpass will be covered in grasses and trees, with help from Public Work, a local landscape architecture firm.

The firm is also working on another innovative insertion of public space in Toronto: the Bentway, which will see a 1.75-kilometre-stretch of unused land underneath the Gardiner Expressway transformed into a usable space equipped with pathways, cycling trails and a host of other amenities, including skating rinks and food markets. 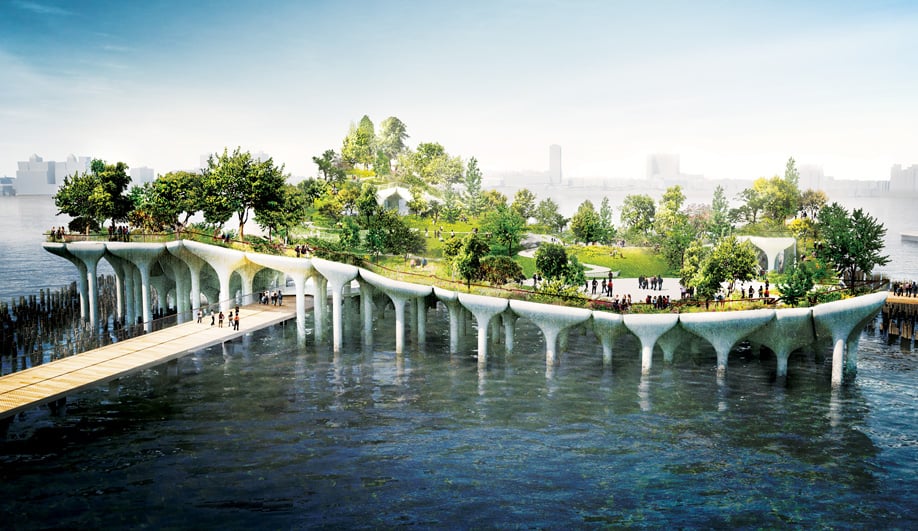 5 Pier 55 in New York City by Heatherwick Studio and Mathews Nielsen
New York’s beloved High Line is about to be overshadowed by Pier 55: a dream-like park that seems as though it was lifted right out of a Dr. Seuss book. Designed by London’s Thomas Heatherwick and New York landscape-architecture firm Mathews Nielsen, the one-hectare green oasis will sit atop a cluster of mushroom-like stilts sunk into the Hudson River. Accessed via two walkways located 50 metres off the Chelsea shoreline, it will contain meandering pathways, intimate gardens and a 700-seat amphitheatre. Construction on the privately funded project is expected to begin later this year. 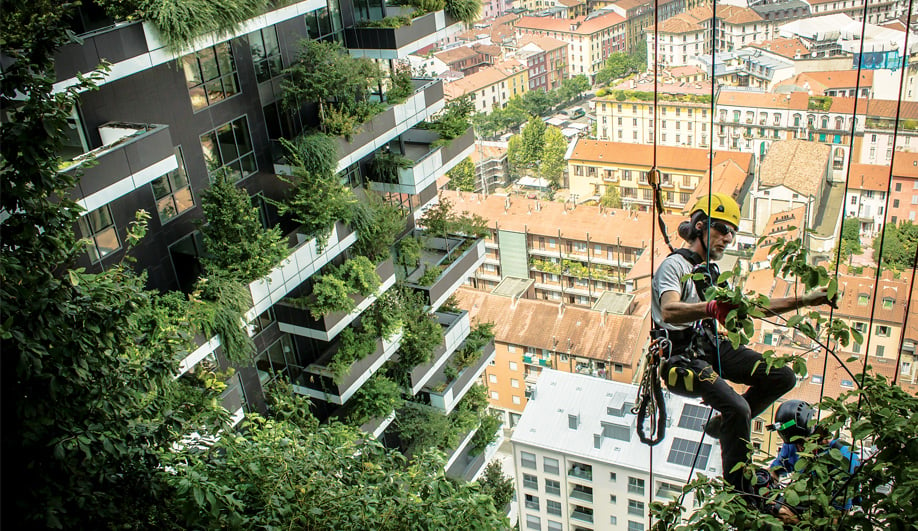 6 Bosco Verticale in Milan by Stefano Boeri Architects
With this pair of residential towers in Milan, architect Stefano Boeri staged a new paradigm for nature-integrated architecture. Both buildings contain extra-large balconies that together house 16,000 plants and 800 trees – some measuring as high as nine metres. The success of the project is proving that bioclimatic skyscrapers are viable beyond tropical hemispheres. Boeri describes his buildings as “anti-sprawl,” as each contains the same amount of greenery as a 7,000-square-metre park. Completed in 2014, Bosco Verticale is a fascinating case study for the potential of green facades going well beyond the merely ornamental. The towers are maintained by “botanical climbers,” who trim and prune the plantings three times a year. They are also the subject of The Flying Gardeners, a short documentary made in 2015.