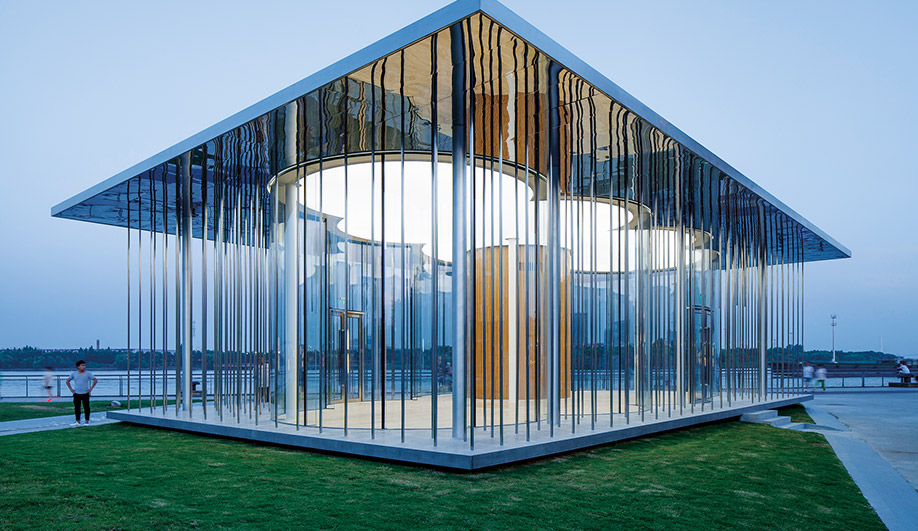 In its new, permanent form, the rest stop is able to host a range of activities, including exhibitions and other cultural events.

The pavilion’s first iteration used suspended white ropes to suggest the form of a cartoon cloud in negative space.

In October 2013, Danish firm Schmidt Hammer Lassen unveiled the Cloud Pavilion near the Huangpu River in Shanghai. With its white ropes suspended between a rectangular floor and ceiling, the pavilion was conceived as “a marker, a meeting point and a place to rest while walking along the riverfront,” according to partner Chris Hardie. It was built to last two months (the duration of the West Bund Biennial), but as its industrial surroundings continued to develop, the pavilion became such a popular hangout that it stayed in place for two years. In 2015, SHL was asked to turn it into a permanent space, extending the West Bund’s cultural programs into the park. They had already caught a cloud. But how to pin it down?

The first task was to strip the pavilion to its barest elements, leaving only the floor, roof and nine support columns. Ropes that once jittered in the breeze were replaced with steel rods, while at the centre of the structure, SHL used extruded glass to enclose a cloud-shaped space. Inside, wooden floors and a cylindrical kitchen area lend new warmth to the pavilion, but the crowning touch is an illuminated ceiling that extends to the edge of the glass enclosure, lighting up every billow of its cartoonish form. But for all this revision, Hardie says the greatest challenge was reopening the in-demand spot in as little time as possible.

Those few months were up in August, when the permanent structure was revealed. The promenade where the Cloud Pavilion sits “really comes alive at night,” says Hardie, so it’s fitting that the structure is at its most striking after dark. The glowing cloud seems to float above the river, reinforcing its intended function as a meeting place, and providing an airy counterpoint to the industrial cranes that surround it. Plus, Hardie notes, clouds represent good fortune in Chinese culture – something the city of Shanghai would surely appreciate in its riverfront revitalization efforts.