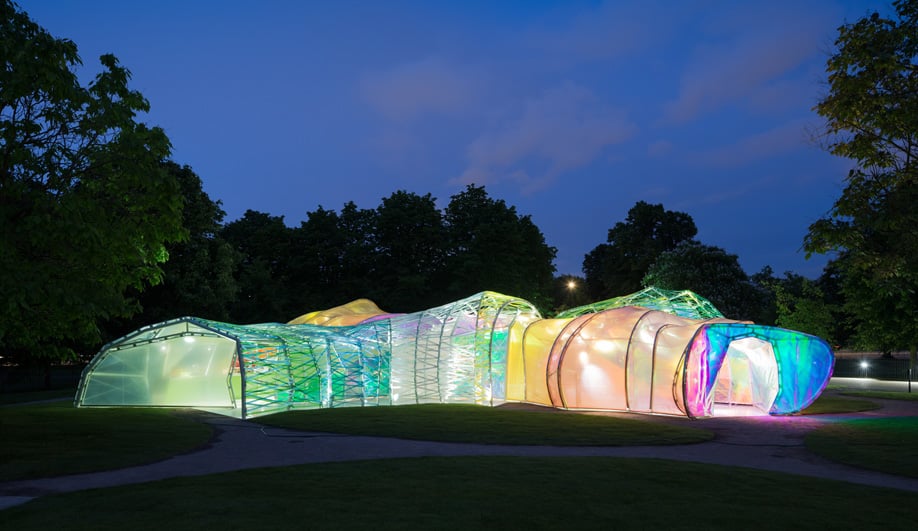 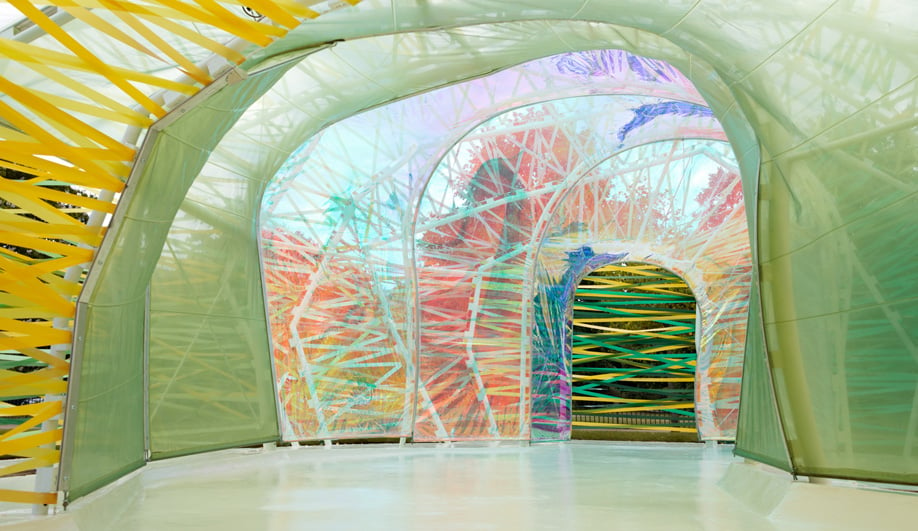 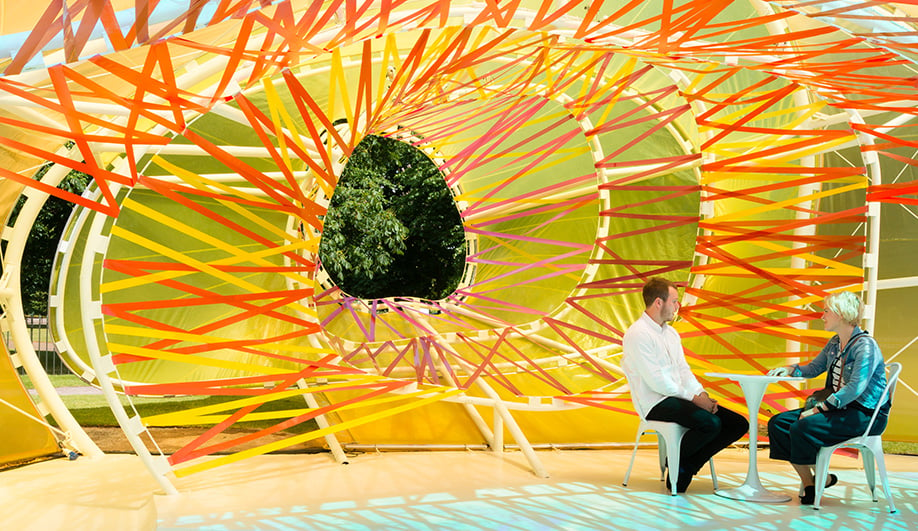 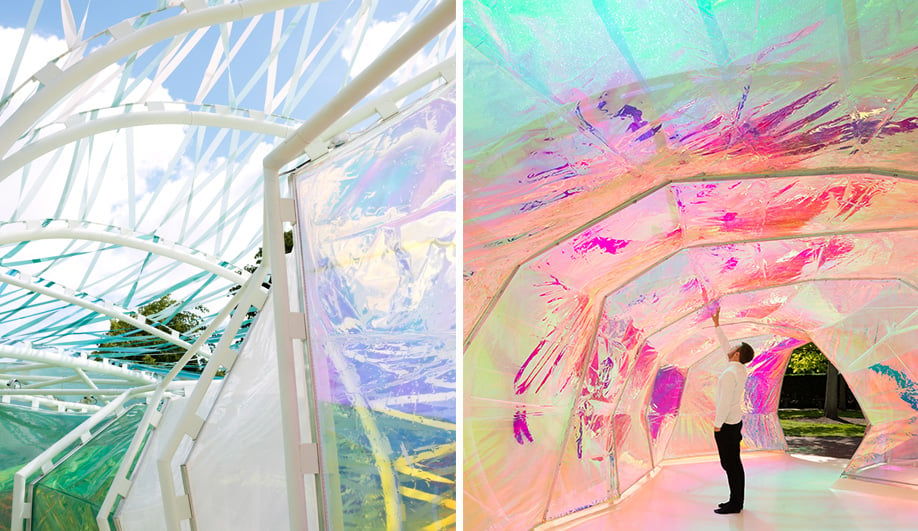 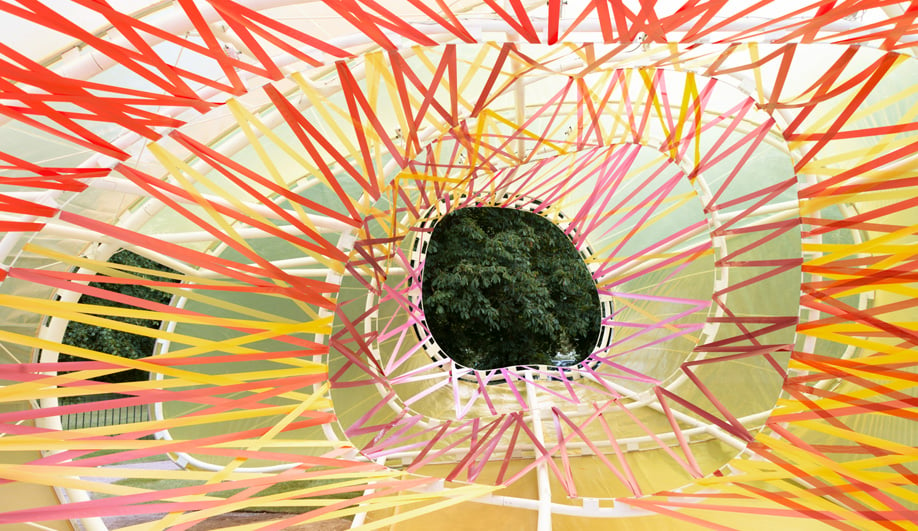 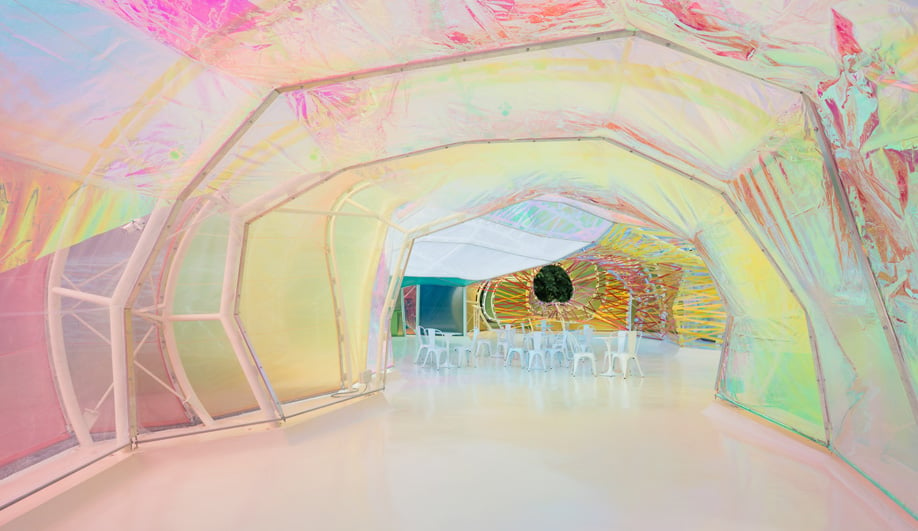 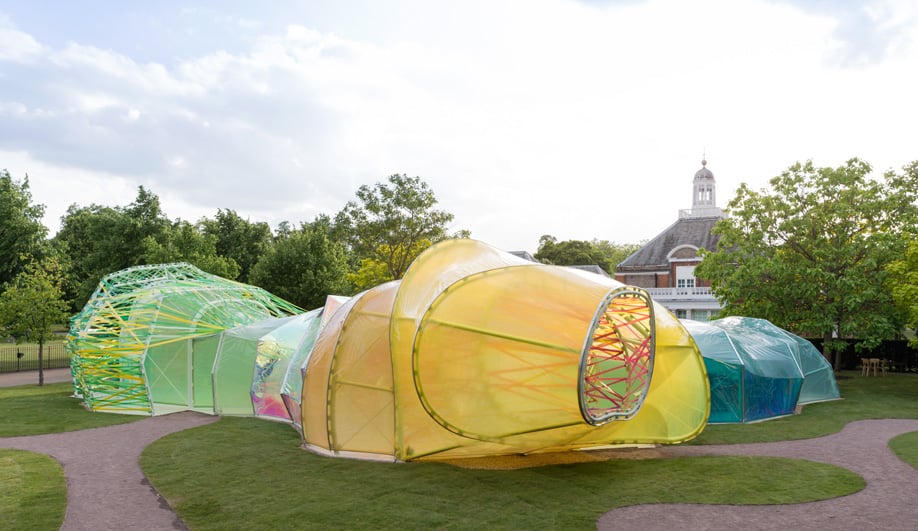 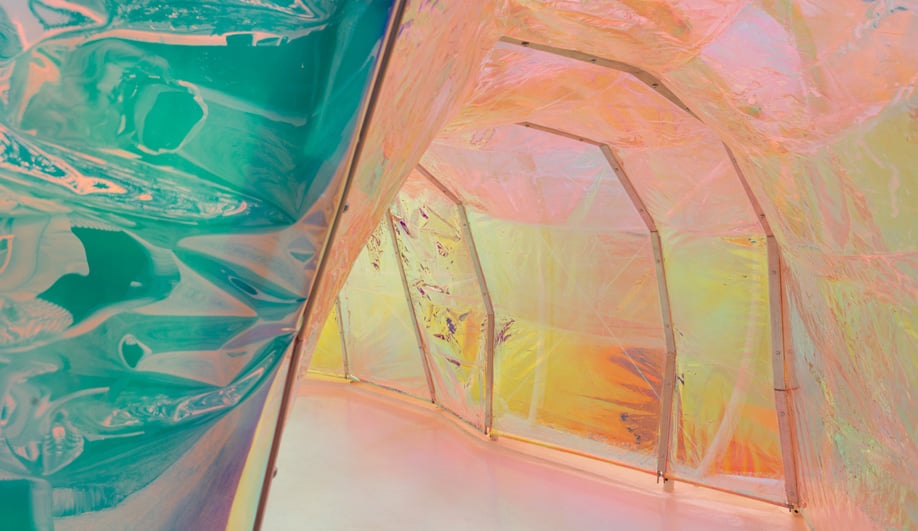 This year marks the 15th anniversary of London’s Serpentine Pavilion, and the colourful mounds of translucent plastic interwoven with equally exuberant webbing, which landed this week at Kensington Gardens, are a fitting celebration. Resembling an assortment of brightly hued balloons and streamers, the 2015 pavilion by Spanish firm SelgasCano looks like a party in itself.

From the lawn you wouldn’t guess that the most important colour used in this rolling rainbow is white. But inside, the bright white floors provide a perfect canvas for all the colours to cast their reflections onto. “The whole pavilion was, for us, kind of an experiment to test different things, different ways… new materials, shadows, colours, effects that we haven’t tested before,” Jose Selgas told Dezeen. He created the four-pronged chrysalis with partner Lucia Canos. The key material is ETFE (ethylene tetrafluoroethylene), a super-strong plastic that was also used to form the biodomes of the Eden Project and Beijing’s National Aquatics Center. The plastic is stretched over white steel framing to form a sprawling arena for play of light, shadow, colour and subtle mirroring effects achieved through dichroic sections of the film.

There are several ways in and from each; it’s up to visitors to choose their path. Along the journey through the interior, a variety of views to the surrounding parkland are framed, though often obstructed with a single layer of the plastic, or a crisscross of webbing. One unhampered view outwards will serve as a backdrop for the stage incorporated to host talks and other events during the structure’s summer-long tenure.

With only six months between the commission and completion of this highly anticipated feature, it’s a fast-forward architectural adventure. “It’s like reading the best thriller, because you never know how it’s going to turn out,” says Julia Peyton-Jones, the director of the Serpentine Galleries who masterminded the pavilion program (along with Zaha Hadid) in 2000.

The concept was initially launched to introduce fresh architectural talent to Britain, and while in some years the commission has gone to familiar names, such as Libeskind, Gehry, Koolhaas and Herzog & de Meuron, the last few years have given major exposure to up-and-comers that had been relatively unknown outside their own countries. Last year, Chile’s Smiljan Radic came seemingly out of nowhere to wow the world with his boulderish shell, and the previous year Sou Fujimoto made his mark with a cage-like structure that drew record-breaking crowds.

This year’s edition, with its simple, lightweight materials, seems decidedly more temporary than any other, and the architects designed it with the intention of moving it to another location following its summer stint at the gallery. Opening just in time to serve as a big finale for the city’s Festival of Architecture, the pavilion remains on site through the fall design events.