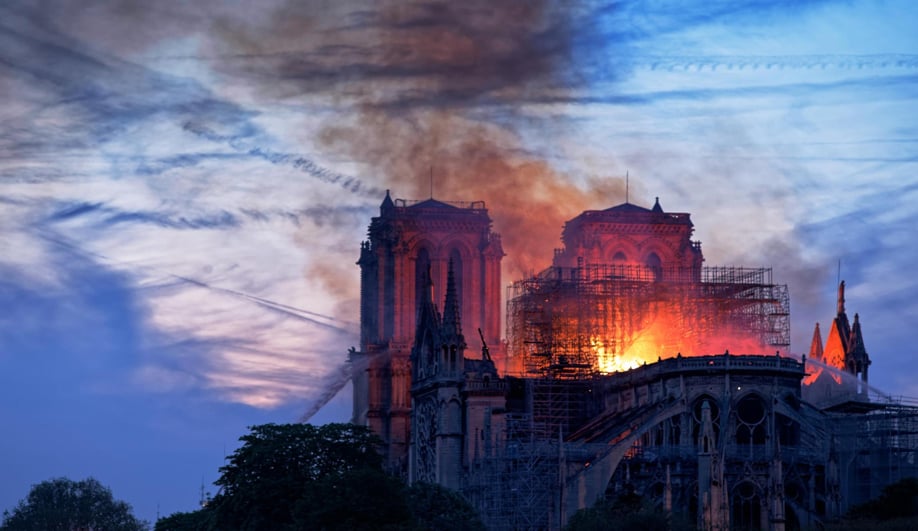 On April 15, a devastating fire tore through the Notre Dame Cathedral in Paris, destroying its 19th century spire and leaving the medieval ribbed roof in ruin. As flames engulfed the cathedral, the world watched on in real-time through social media – with a piece of France’s cultural and architectural heritage slowly disappearing from view behind the smoke. A day later, French President Emmanuel Macron announced that the cathedral would be fully rebuilt within five years, with an international competition to redesign the roofline launched the next day. But does the enthusiasm underestimate the architectural – and cultural – complexity of the task? 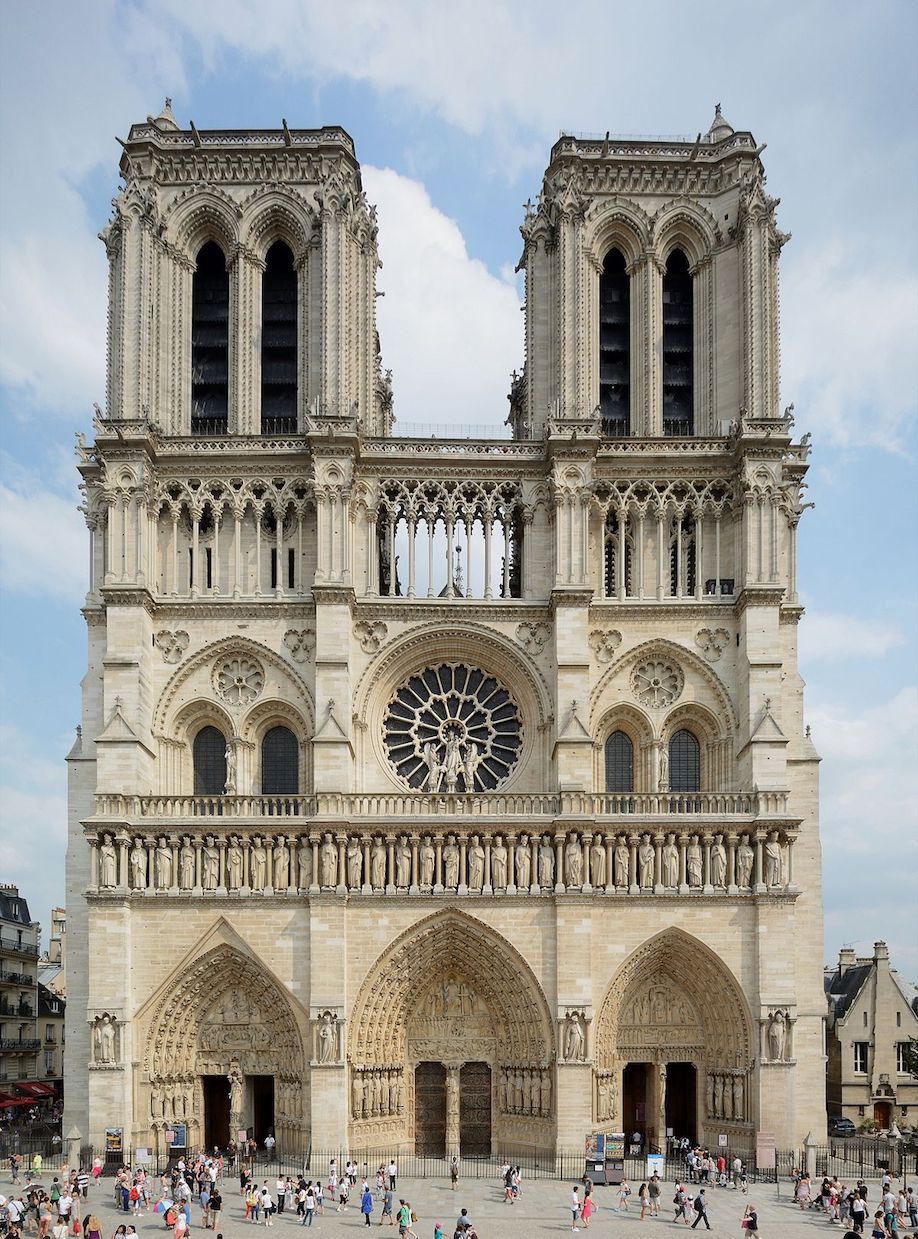 The Notre Dame in 2013. Photo by Peter Haas via Wikimedia Creative Commons.

On April 29, an open letter addressed to Macron was published in Le Figaro. It was co-signed by 1,169 architects and heritage experts from around the world, as well as Louvre chief curators Nicolas Milovanovic and Cécile Scailliérez. The authors called on the President to reconsider the accelerated timeline, warning that an expedited process could harm the structural (and intangible) integrity of the 850-year-old cathedral.

“You have said, Mr. President, that you want to restore Notre Dame. It’s our desire too, but in doing so, let’s not do away with the complex thought that must go into this (project) for the appearance of efficiency,” the letter reads. “Let’s take time to evaluate. The executive branch has to listen to the experts. France is home to some of the world’s best experts in this area.”

The letter also criticizes Macron’s demand for the cathedral to be rebuilt “more beautiful than ever” in time for Paris’s 2024 Olympics – with a proposal tabled that would allow the reconstruction to bypass heritage regulations in order to meet the five-year deadline. 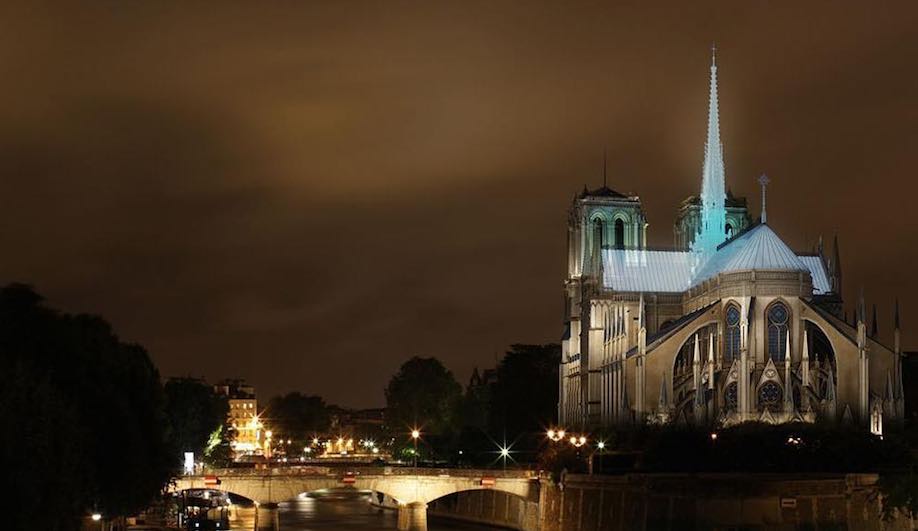 Studio Fuksas present a roofline in Baccarat Crystal on Instagram.

In the meantime, the architecture competition to rebuild the cathedral has immediately yielded a series of ambitiously varied and dramatic proposals, ranging from a planned glass and steel spire by Foster + Partners, to Studio Fuksas’s reconstruction of the roof and spire in Bacarrat Crystal and Mathieu Lehanneur’s provocative concept of memorializing the flames themselves in place of the spire. Conversely, a recent survey revealed that a narrow majority of French people want the cathedral to be rebuilt exactly as it was. 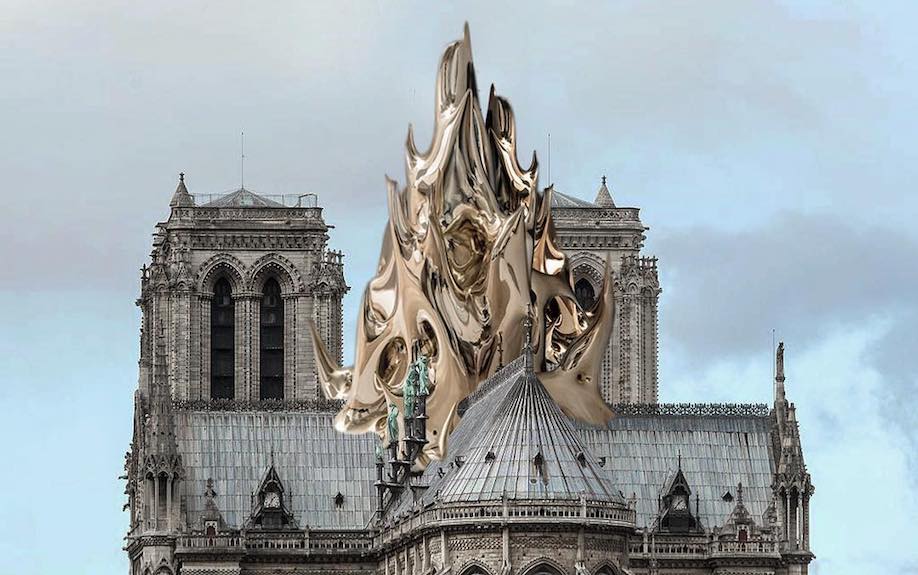 On Instagram, Matthieu Lehanneur imagines a memorial to the flames themselves.

While Instagram continues to be flooded with redevelopment plans, the letter argues that any decisions about the future of Notre Dame must be informed by a full assessment of the damage, which has yet to be completed. “We know that the political calendar requires quick action, we know how much a mutilated Notre Dame weighs on the image of France,” it states. “Nevertheless, what will happen at Notre Dame in the years to come concerns us all, far beyond that calendar.”

Although the letter does not focus on the architecture competition itself, French cultural heritage architect Hervé Cazelles argues that it suggests a hesitation to embrace a modern addition. “The fear is that they build something contemporary. That is what is being said between the lines in this letter,” Cazelles told France 24.

Yet, even if reconstruction proceeds on a slower timeline, the cathedral’s architectural and historical character will unavoidably be altered. “Inevitably, a different incarnation of Notre Dame will arise, even if it is as close a facsimile as possible,” writes Darran Anderson in CityLab, pointing to the “Ship of Theseus” dilemma that befalls rebuilt cities like Dresden and Warsaw. And given the cathedral’s extensive history of alteration, reconstruction and addition, it would be misleading to apply a narrative of continuity to the past, much less the future. 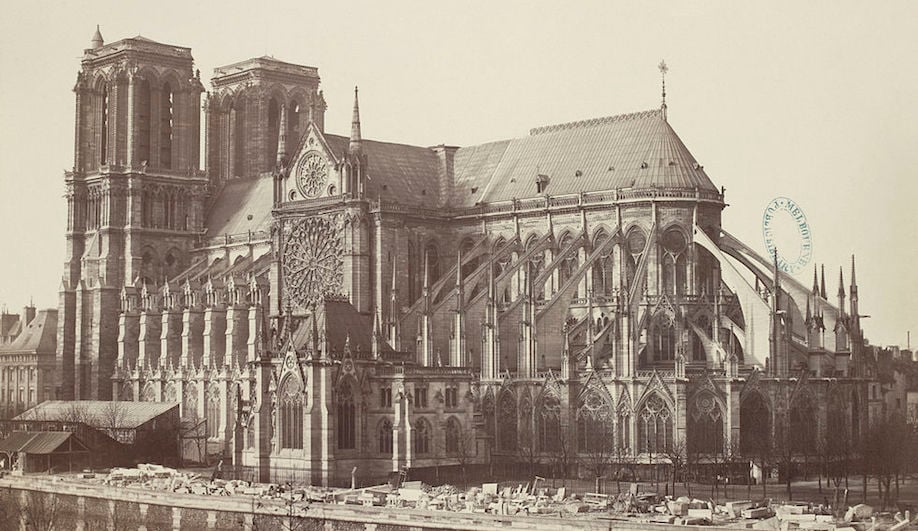 The cathedral in a photograph circa 1858-60, before the spire was added. Purchased Architectural Photographic Association; 1861.

If Notre Dame is as much a palimpsest of history as a record of it, the reconstructed cathedral will inevitably be a relic of both the present and the past. Whether the structure is rebuilt as a a version of its former self or as a radically contemporary addition, its future form will emerge as a testament to the 21st century values that inform its reconstruction.