Shower to the People: From Big Rig to Public Washroom
Public sanitation needs are challenging many cities. One solution - proposed by StudioAC for Toronto non-profit World Changers - may lie in converted big rigs. 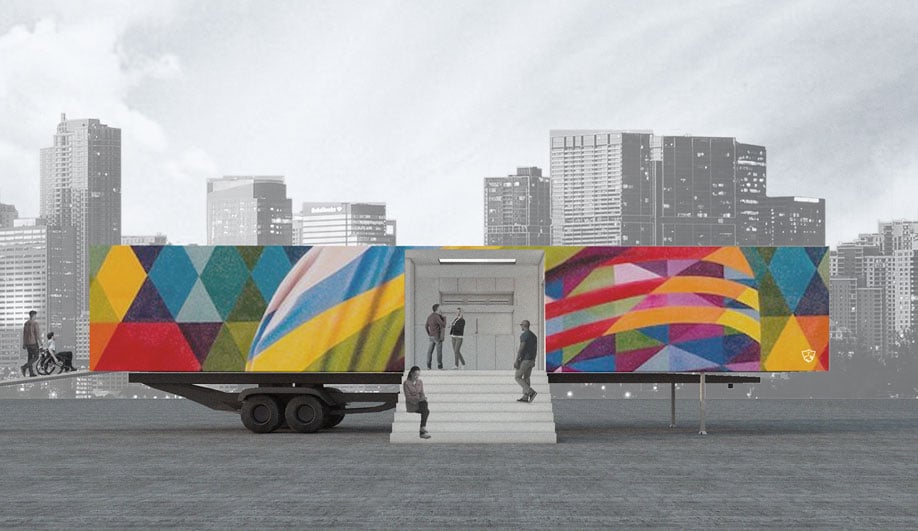 Public sanitation needs are challenging many cities. One solution – proposed by StudioAC for Toronto non-profit World Changers – may lie in converted big rigs.

Clocking in at number six on the United Nations’ list of goals for sustainable development, adequate sanitation is a major contributor to human health and dignity. Yet in many cities – Paris and its 400 self-cleaning Sanisettes being a notable exception – public washrooms remain rare and public showers even more so. 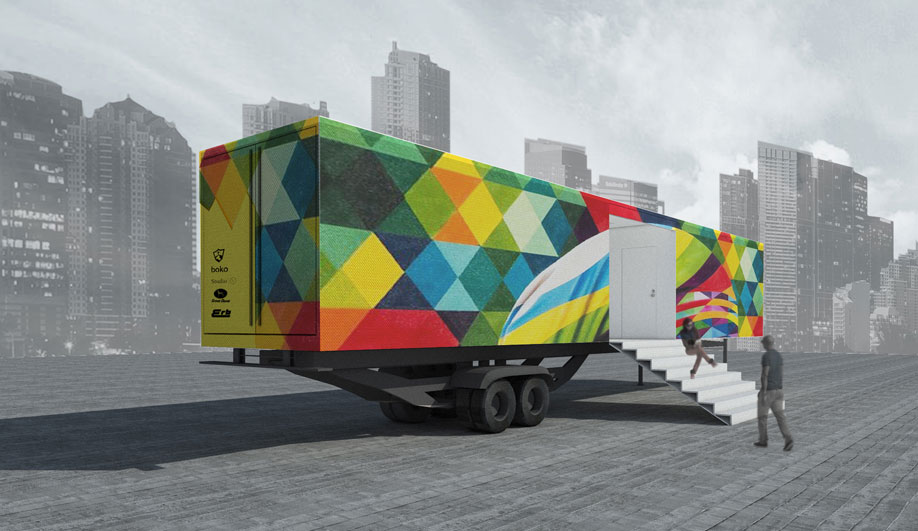 A proposal that Toronto architecture firm StudioAC designed for World Changers, a local not-for-profit dedicated to supporting the vulnerable, is striving to change that by transforming a decommissioned truck trailer into a mobile shower facility. The vehicle, donated by Erb Transport, would be outfitted with three private, full-service washrooms, then stationed at homeless shelters that don’t already provide showers.

For firm partners Andrew Hills, Jennifer Kudlats and Reza Nik, who completed their work pro bono, the project was an opportunity to demonstrate design’s ability to elevate everyday life for those in need. 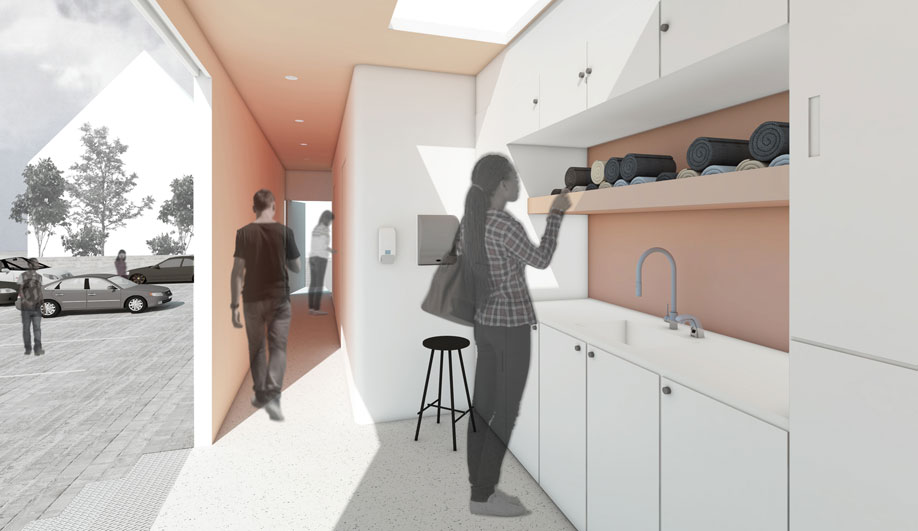 Inside the mobile facility, both the lobby area (where guests would receive towels and check their belongings into lockers) and the bathroom spaces are in keeping with the clean, contemporary aesthetic that characterizes the firm’s residential projects, achieved here with more hygienic, ultra-durable materials than StudioAC typically works with. “When we met with consultants from the homelessness community, safety was one of the concerns we heard,” says Hill. “They didn’t want anything that could be broken. But at the same time, we were committed to making it look better than a Porta Potty.” 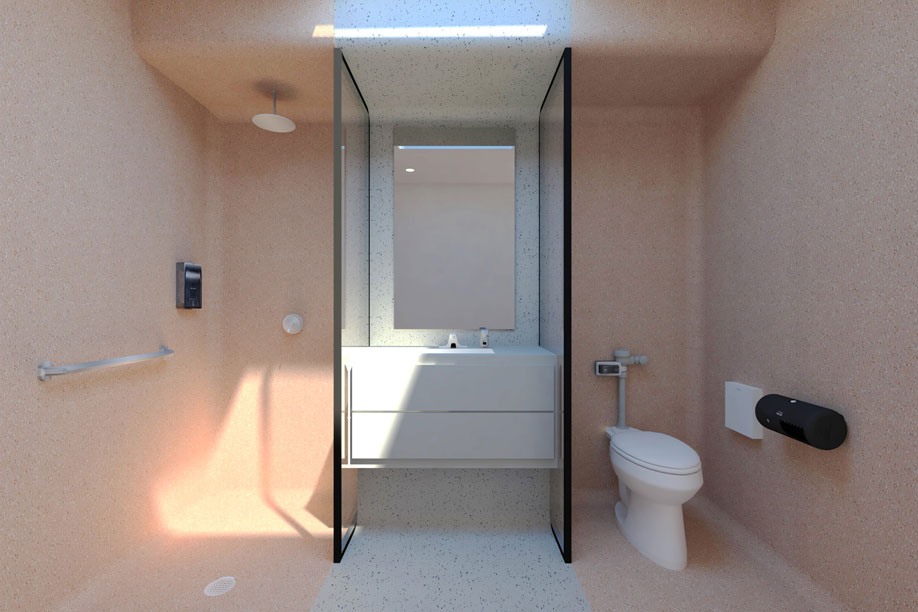 The facility’s interior would be lined with a durable rubber material typically used for hospital flooring.

In each washroom, the two partitions that separate the central sink from the shower and toilet on either side have the same effect as frosted glass but are actually shatterproof acrylic. And after falling hard for the terrazzo-like patterning of an anti-slip rubber flooring material commonly used in hospitals, the firm decided to wrap entire rooms in it, creating an end result that is, refreshingly, more funky than clinical. 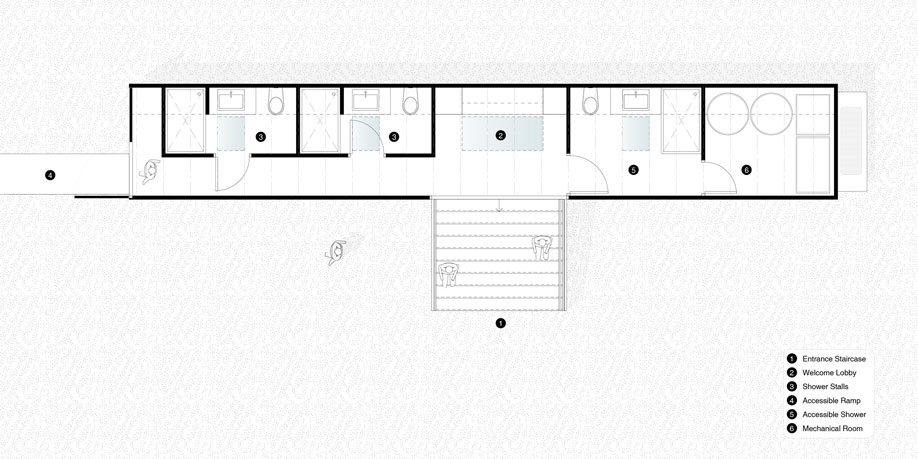 Some logistical puzzles were solved during a visit to the local R.V. convention. “We asked so many questions – like, ‘Do we want water on board or will it hook up to a city source?’ – and the answers really gave us an understanding of the language and components of R.V.s,” says Nik. Their final scheme places a generator and water tank at the far end of the truck, with plumbing and HVAC running along the side and contained in bulkheads. As waste would be stored and later removed by a contracted company, the facility requires no external hookups.

Currently seeking funding to begin construction, with BOKO Design lined up as a contractor, the project makes a case for third parties taking unconventional approaches to deliver the basic sanitation services that so many cities struggle to provide. “When there’s no precedent for something, you do come up against roadblocks,” says Kudlats. “But passion for the cause helps push past that.”