The elevated site offers panoramic views as far as 50 kilometres in each direction, all the way to the Atlantic coast. 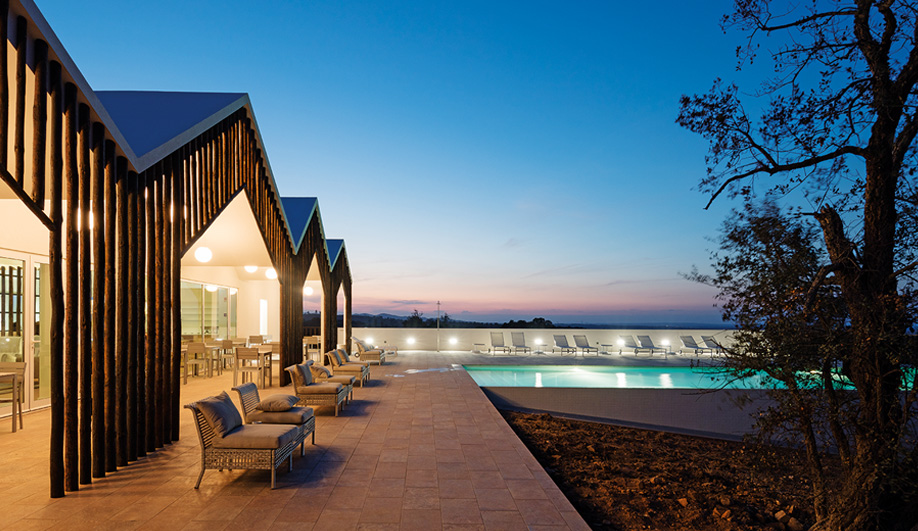 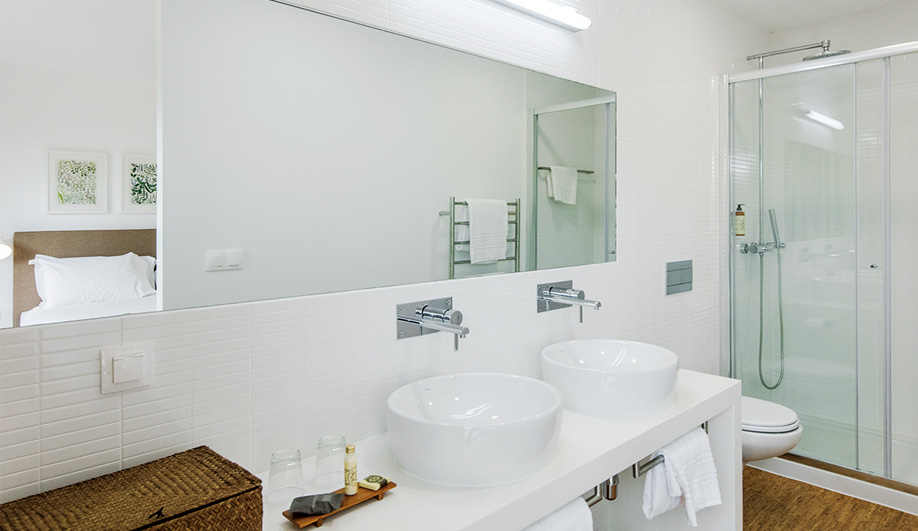 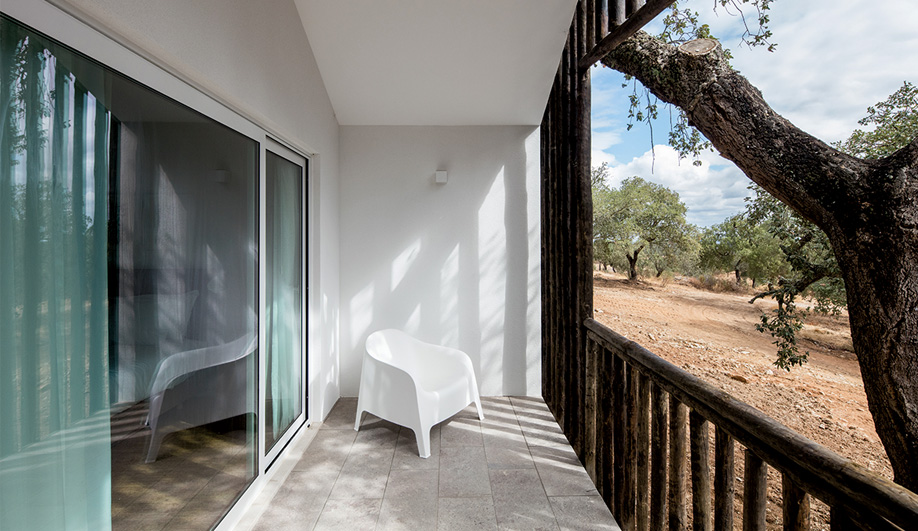 Rows of unfinished logs form a brise-soleil for added shade. All the hotel’s exterior surfaces are clad in insulating calcium silicate sheets.

Apart from the chirping of crickets, silence prevails at the Sobreiras – Alentejo Country Hotel. This rural resort in Portugal’s verdant Setúbal County, 130 kilometres southeast of Lisbon, lies at the end of a dirt road that winds between cork, oak and olive trees and varied Mediterranean scrub.

Clustered along the hillside of a 25-hectare former farm, its 22 pitched-roof rooms and two suites stretch outward in a broken line from the main reception, a lounge area and a swimming pool. The work of Lisbon architect Miguel Correia and his team at FAT (Future Architecture Thinking) the design is intentionally modern and simple. “We wanted to make people feel comfortable,” says project manager André Correia, “but still feel the unpretentious style of the countryside, and of being outside a big city.”

From its hilltop site – a traditional move in the region – Sobreiras offers panoramic views of gentle hills rolling toward the distant horizon and the beaches of Melides and Comporta along the Atlantic coast. “It’s the most plain area of Portugal,” says Correia, “but there are a few mountains, and Sobreiras is located on one of the highest points. When the weather is clear, and that’s almost every day, the view extends as far as 50 kilometres.”

Future Architecture Thinking strived to keep the exterior as minimal as possible, while still evoking the feel of a village.

The rooflines of the suites, clustered in groups of five, form an irregular zigzag that epitomizes the architects’ use of subtle symmetries; within each structure, each peak is a separate guest room, as self-contained as a little house on stilts. “The roof-tops are never the same height,” Correia points out. “That was one thing we wanted to take from the region’s heritage, to make it seem like a village where all the houses have different rooftops.” The rooms are grouped, rather than strung in a single line, to preserve the cork trees that dot the site. “You’re not allowed to cut down cork trees in Portugal,” Correia says, “so some of them are almost inside the hotel.”

The terraces and reception area are recessed behind rows of vertical wooden logs – a brise-soleil that provides both privacy and shade. It’s just one way FAT has shaped the hotel to respond to climate. Virtually all the interior and exterior surfaces are constructed from insulating sheets of white calcium silicate, while double-paned windows, seasonal thermal energy storage, east-facing rooms and solar panels further reduce energy demands. Although temperatures can top 40 degrees Celsius in the summer, “Last August,” Correia says, “there was almost no need to use the air conditioning.”

The dining area features a custom steel-framed window that offers a clear view of the chefs at work.

Indoors, the pared-back lounge and dining areas reflect the region’s earthy palette. The rustic feel of coffee tables custom-made from tree trunks plays off the minimalist look of casual Scandinavian furniture, much of it from Ikea. The kitchen is showcased by a large wall fitted with glass, giving dinner guests a clear view of the chefs at work. This is gourmet heaven: the surrounding farmland provides a constant supply of olive oil, and seasonal produce as well as cured ham and sausage made from local livestock. The hotel is as self-sufficient as possible, letting guests taste the local specialties, with wines, olives and lamb just a few of the highlights.

FAT selected primarily Scandinavian furniture for a clean yet inviting look, while custom tree-trunk tables hint at the rustic surroundings.

The sunlit double bedrooms, meanwhile, include private terraces, while larger suites pro-vide two interconnected spaces finished with white cotton drapes and cool cork flooring. The real draw, though, is the outdoor spaces, which are designed for laid-back leisure. Shady terraces take advantage of the extraordinary beauty of the landscape, and the raised infinity pool seems to invite a genuine dip into a natural landscape that recedes as far as the eye can see.

How to get there: Sobreiras lies about 90 minutes south of Lisbon by car – a picturesque drive through wild, flat terrain that includes a 17-kilometre trip across the Vasco da Gama suspension bridge, the longest in Europe. Nearby Grândola has its own railway station on the main line between Lisbon and Faro. Passenger trains are operated by Comboios de Portugal (CP).

Where to eat: In the hotel dining room, local ingredients dominate the menu: terrine of pork and chestnuts, pork filet flavoured with quince, or lamb fattened on the organic pastures between lines of olive trees. Fresh eggs are collected daily from chickens on the nearby farm, and the hotel’s fruit tree groves contributes lemons, figs, plums, quinces, cherries, peaches, apples and pears.

Things to do: The scrubby farmland around the hotel has been largely abandoned for years; today, a network of cattle drivers’ tracks, old Roman roads and ancient paths offers plenty to explore. Sobreiras is engineered for maximum peacefulness, but if you fancy an adventure, mountain bikes are on hand – simply follow the dirt roads that lead to the coast.

Less than an hour’s drive north lie the windswept beaches of Tróia, a peninsula that juts between the Atlantic Ocean and the Sado River’s lake-like estuary. Also within easy driving distance are the rolling hills of Serra de Grândola, and the nearby town of Alcácer do Sal, which has been settled since the Neolithic era.