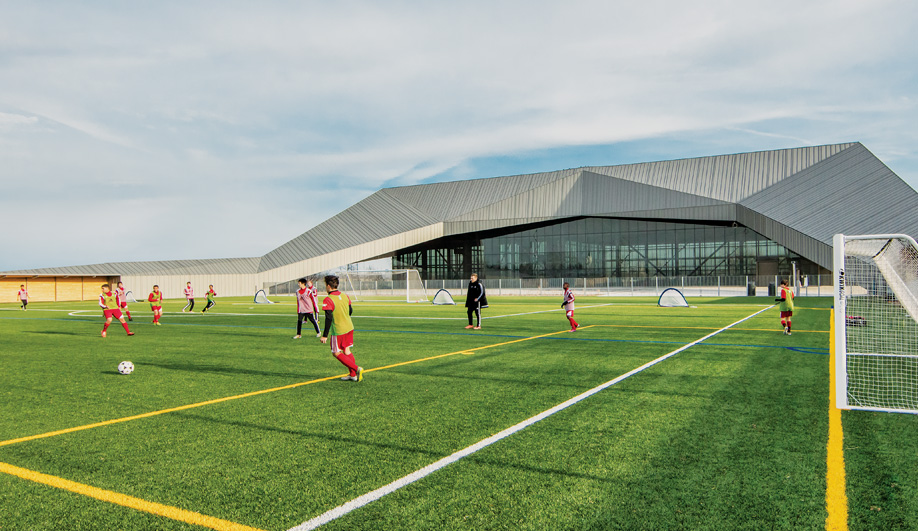 Designed by Saucier + Perrotte Architectes and HCMA, the Soccer Centre at the Saint-Michel Environmental Complex embraces its bucolic setting.

Over 20 years ago, Montreal embarked on one of its largest reclamation projects ever, transforming 192 hectares of former landfill into an ecological park. Originally a limestone quarry, the Saint-Michel Environmental Complex (CESM) is destined to become the city’s second-largest green space, after Mount Royal, boasting public pathways, an artificial lake, and a cluster of sports and leisure facilities that already includes an indoor skate park and a circus complex.

The park’s revitalization of the neighbourhood and its importance as a paragon of sustainable development were celebrated last year with the epic conclusion to a multi-stage architectural competition: the opening of the Soccer Centre at the CESM. 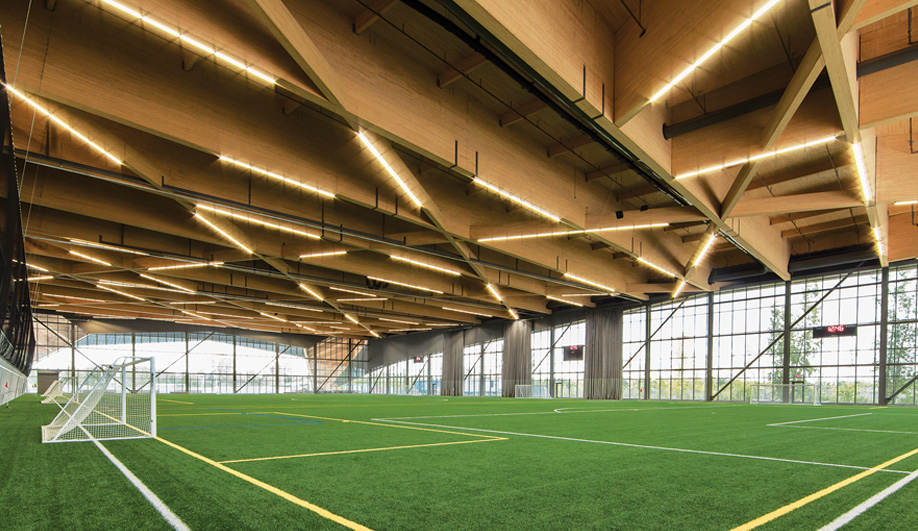 The canopy over the interior soccer field, criss-crossed by a graphic lattice of joists, employs box beams to complete the uninterrupted 68.5-metre span.

The winning scheme, by Saucier + Perrotte Architectes with Vancouver’s HCMA Architecture + Design, evokes the history of the site in a singular monumental – or elemental – gesture. Wrapped in zinc panelling and left exposed from below, the simple yet dynamic roof structure unifies large programmatic areas that include two soccer fields placed end to end (one indoor, one outdoor), as well as administrative offices, lockers and training rooms, a cafeteria and retail space.

“The roof emerges from the park’s artificial topography like a layer of mineral stratum,” explains principal architect Gilles Saucier. “The lattice is meant to recall the geological nature of the site.” A 68.5-metre free span that shelters the indoor soccer pitch is achieved using 13 primary box beams of four-metre-deep cross-laminated timber, which were fabricated in thirds, then interconnected on site. Despite its mass, the roof floats above 13.5-metre-high glazed walls, cantilevering over the entry plaza, then folding to
the ground like a piece of metal origami. 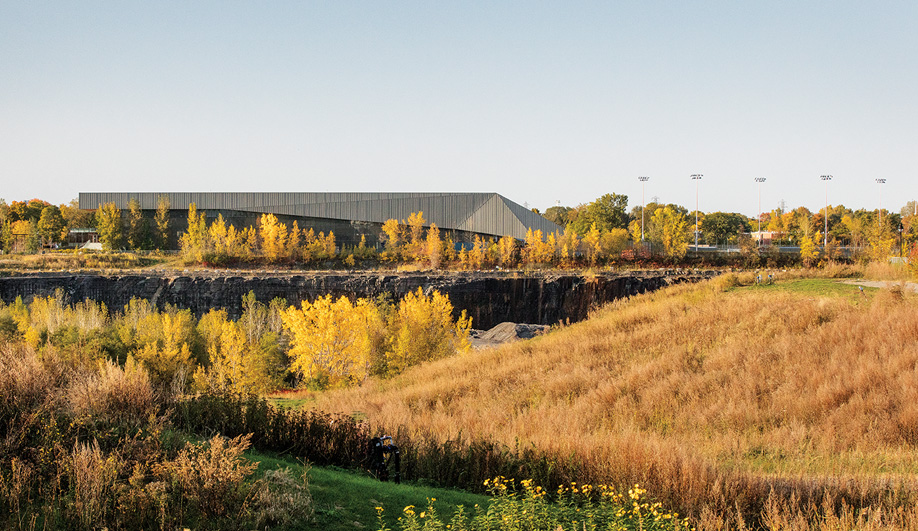 Seen from inside, the roof frames unobstructed views toward the exterior playing field, and to the cliff of the former quarry and the park beyond. When it’s seen from outside on a clear day, sunlight hitting the ceramic fritted glass reflects the landscape back to the park, effectively dissolving the building’s massive footprint.

According to Saucier, the centre embodies a new approach to sports facility typology in Canada. In a harsh climate like Montreal’s, where the outdoor playing season is limited, the answer to the demand for year-round facilities has typically been an oversized, opaque metal box. “Such a proposal would have been irresponsible,” Saucier argues, “turning its back on the neighbourhood and the site.”