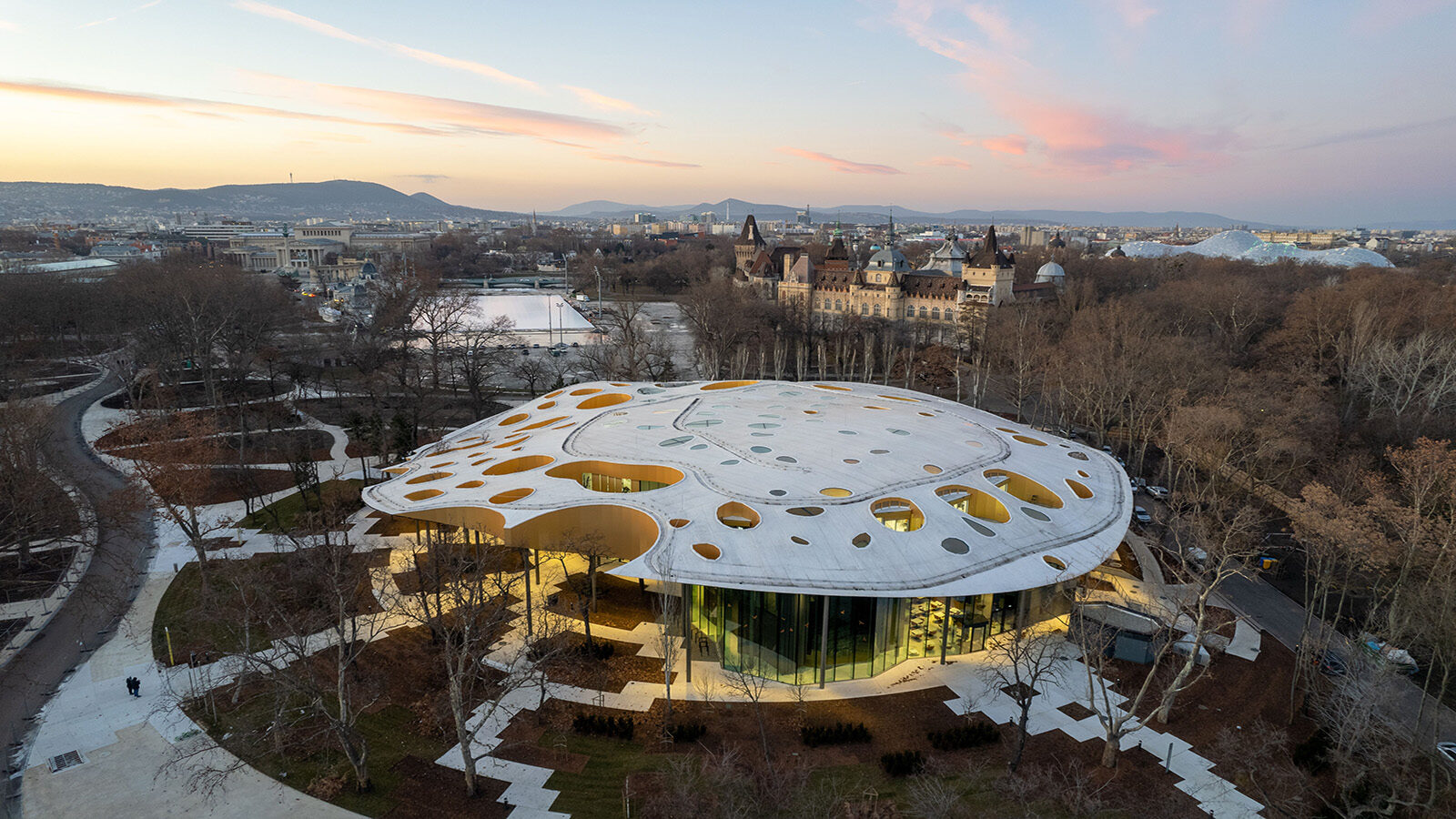 In Budapest, the new museum and concert hall will serve as a cultural landmark and a reminder of the power of music.

“There is perhaps no other cultural area where Hungarian art has made a bigger impact than in music,” reads the Liget Budapest Project website. Indeed, several Hungarian composers — such as Béla Bartók and Franz Liszt, to name a few — are now considered to be among the most prominent musicians of the 20th century.

The Liget Budapest Project seeks to revitalize the 122-hectare City Park with a variety of new museums and public spaces. Its first initiative is House of Music, a part-museum, part-concert hall cultural hub opened to the public on January 23. Designed by Japanese architect Sou Fujimoto, who is known for his undulating structures and his mastery of natural light, the 9,000 square-metre building will house a range of “interactive musical experiences” and permanent exhibitions — all under one rather striking roof. 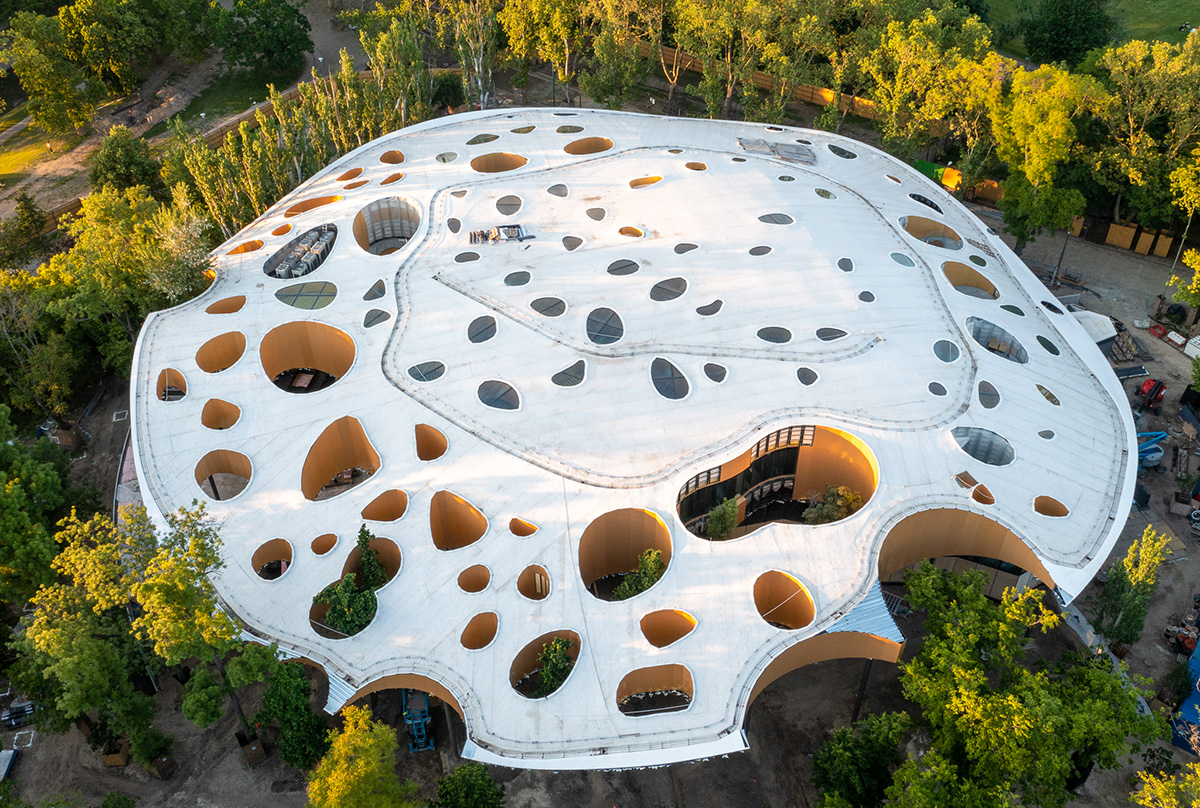 Built on a previously underused green space in the centre of Budapest, House of Music is made to merge with its context. As a continuation of the surrounding wooded park, the building’s glass curtain is made up of 94 custom-manufactured, heat-insulated panes — with the largest measuring in at over 3.5 metres. This facade treatment create a completely translucent building envelope, blurring the line between indoors and out. 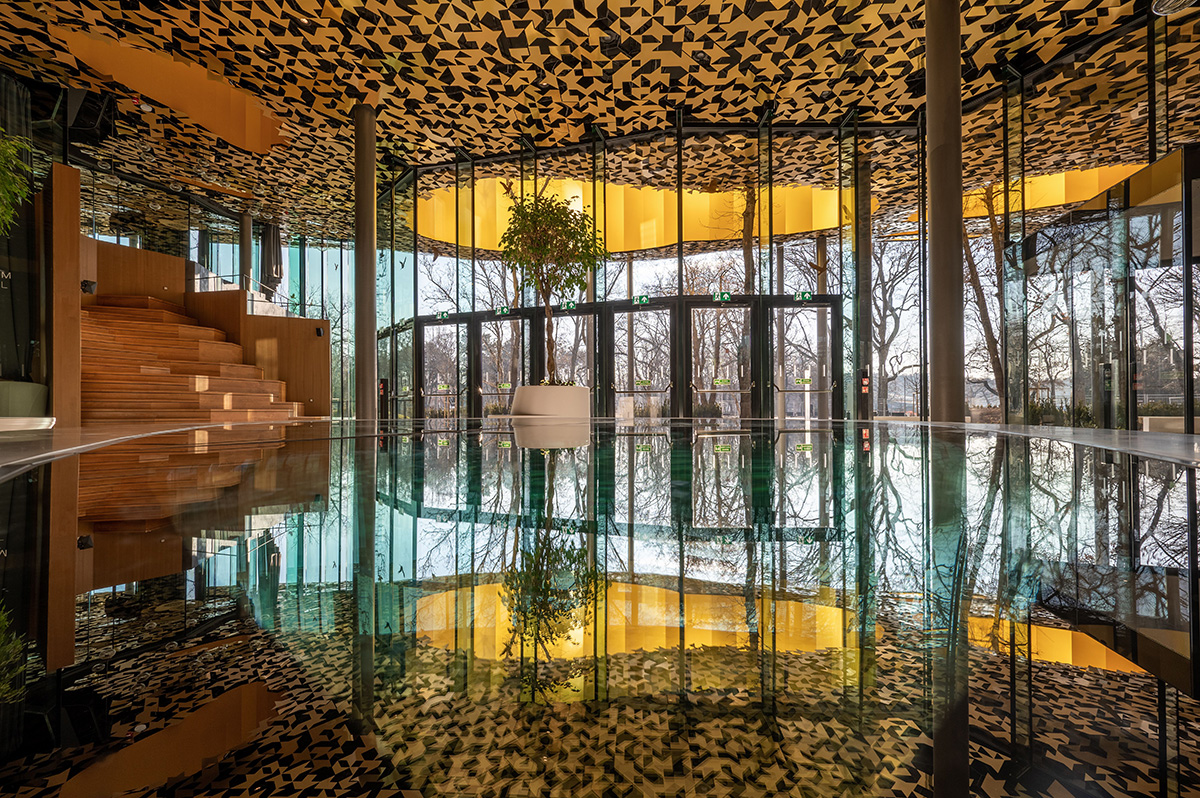 And although the multitude of crater-like holes in the roof — over 100 in total — may elicit some trypophobia when viewed from above, they are crucial to Fujimoto’s design. Allowing trees to slip through, while channelling light into the depths of the building, the light wells give House of Music a singular presence, reminiscent of the nearby tree canopies. 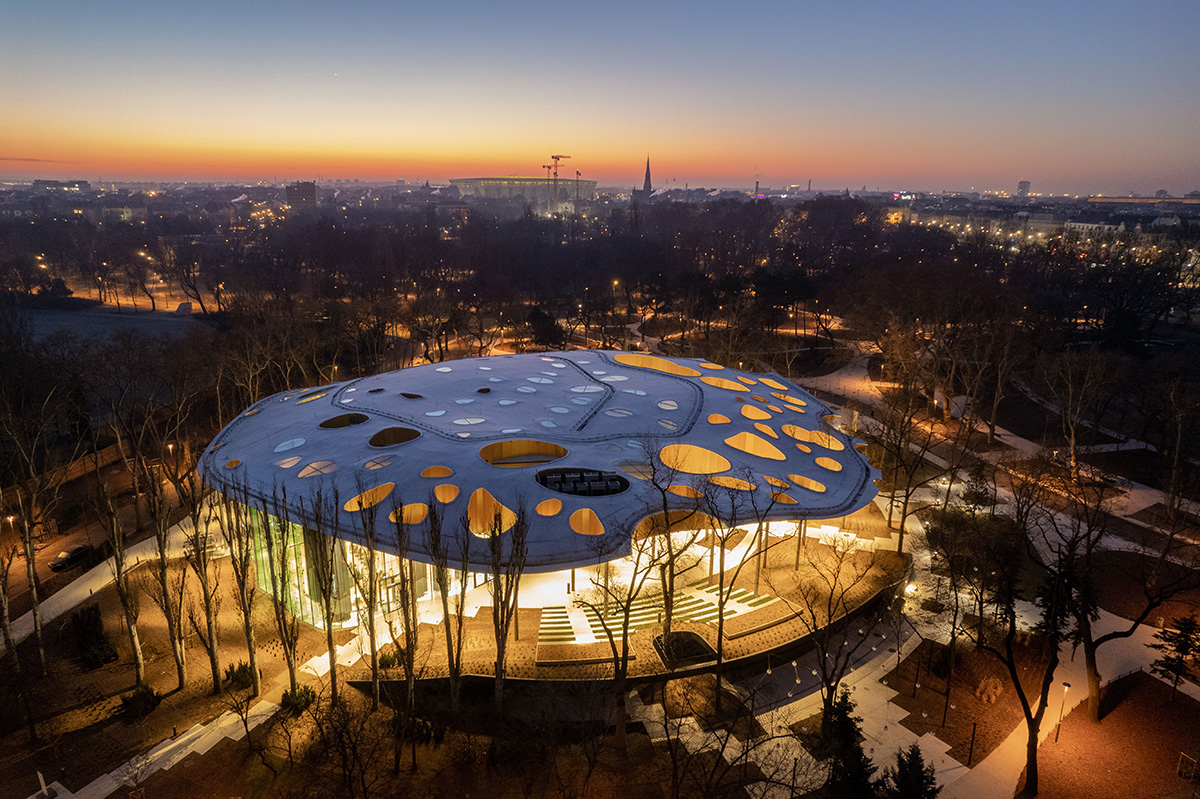 “We were enchanted by the multitude of trees in the City Park and inspired by the space created by them,” remarks Fujimoto. Engraved into the roof’s underside, over 30 000 geometric shapes reminiscent of the surrounding foliage adorn the “canopy”. 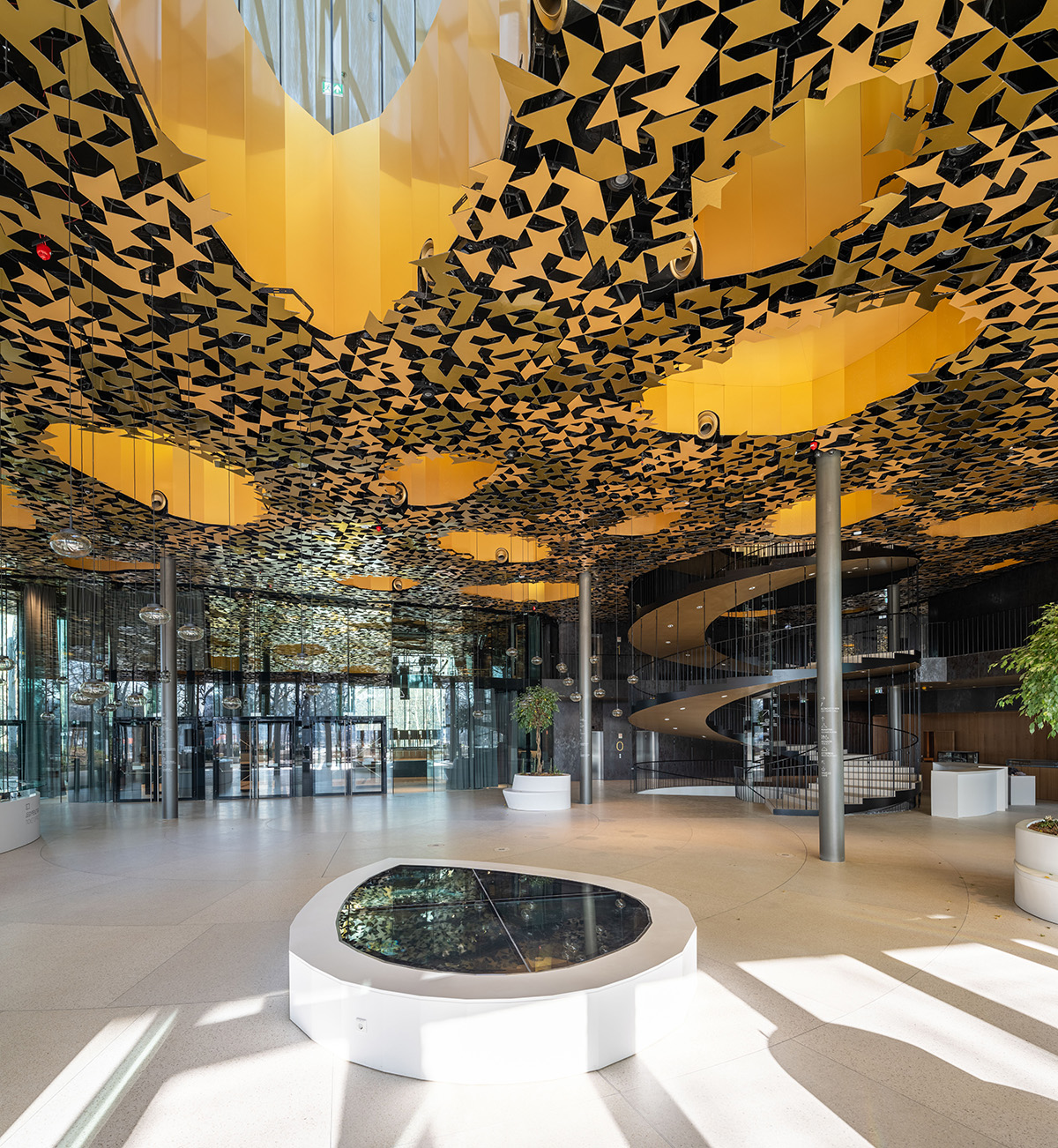 Inside, the House of Music’s most notable feature — at least from a sonic standpoint — is its hemispherical sound dome, which allows up to 60 visitors at a time to experience 360 degree surround sound emitted from more than 31 loudspeakers. And of course, it wouldn’t be a House of Music without a concert hall — or in this case, two of them. 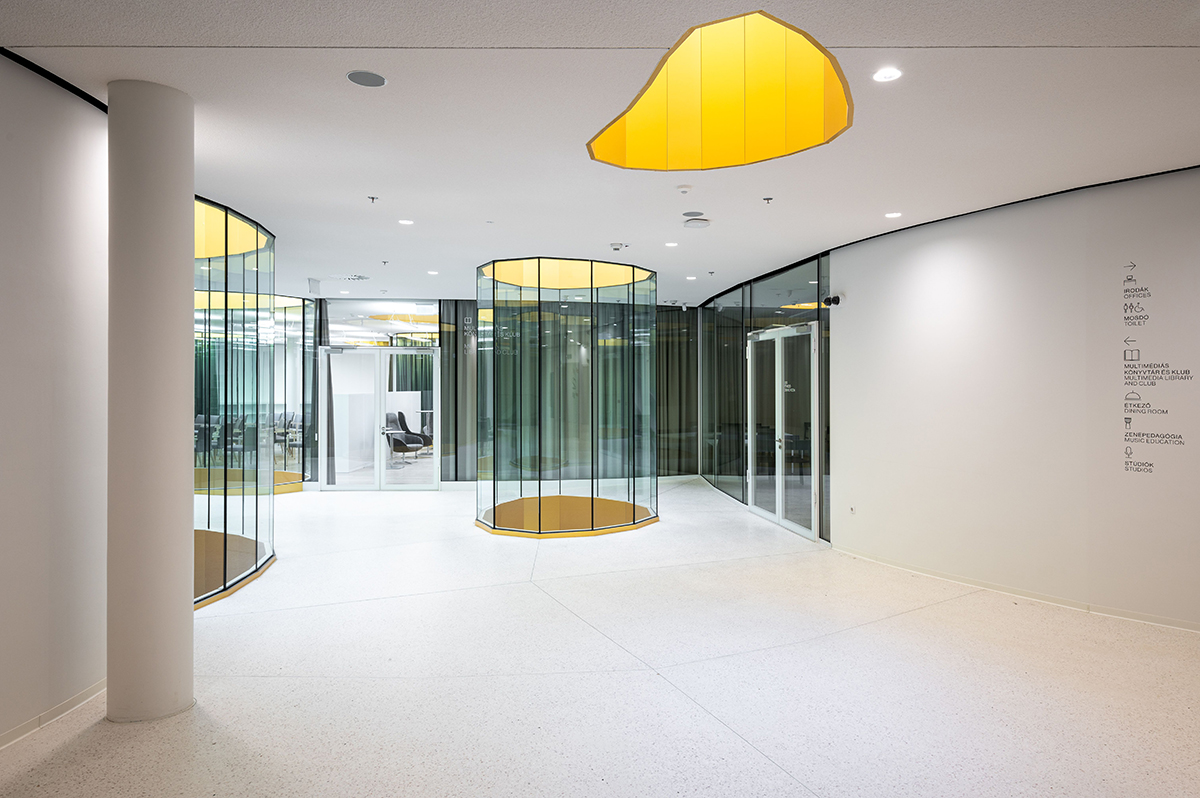 Built over three storeys, which were meant to represent the “three movements of a musical score,” the museum’s disparate levels are connected by a sculptural spiral staircase. The upper floor is dedicated to workshop and educational classrooms, while the ground floor houses both music venues — one of them a 320-seat concert hall, and the other an open air stage. 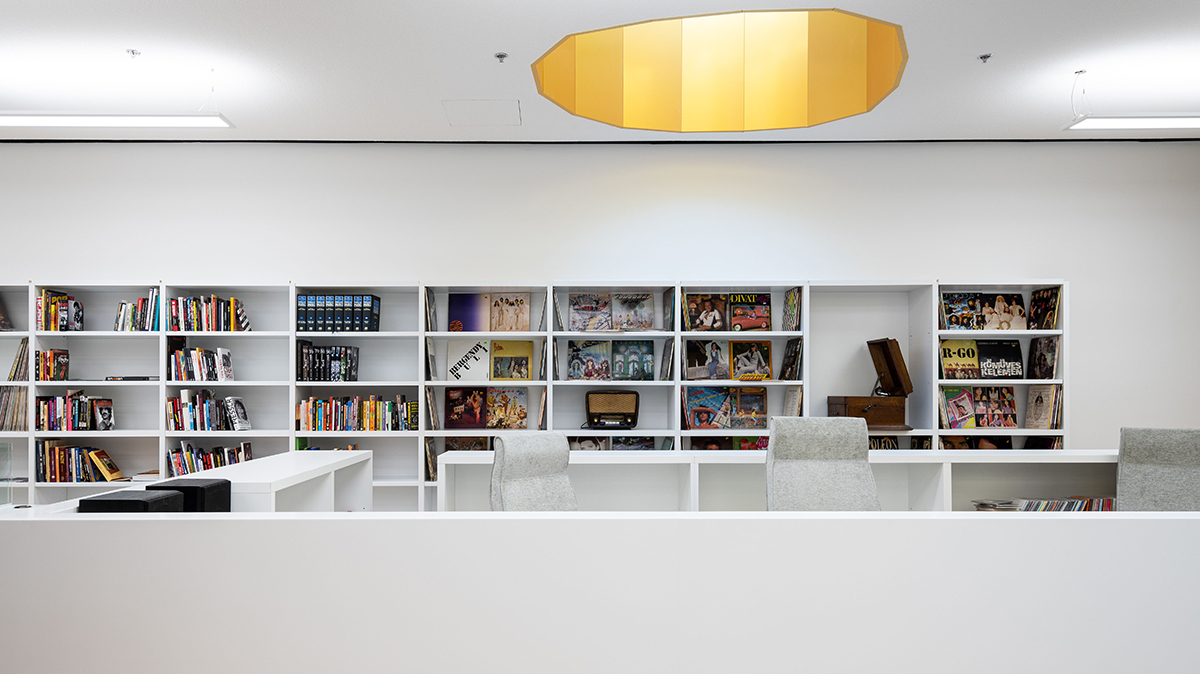 Meanwhile, the basement level will house the museum’s gallery spaces, including a permanent exhibition named “Sound Dimensions – Musical Journeys in Space and Time”, which leads visitors on a journey through the history of European music. 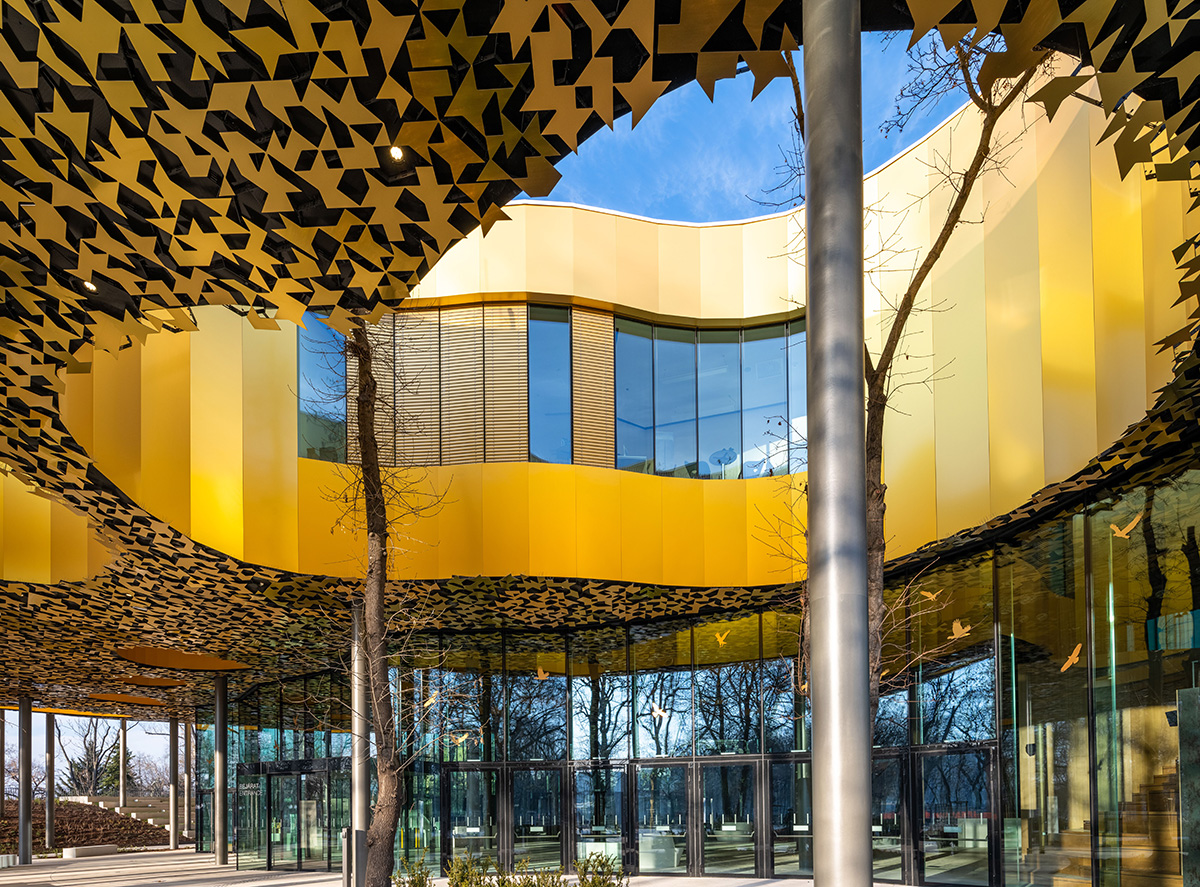 The museum will host a range of live music performances drawing from all genres — from classical and folk to pop and jazz — alongside exhibitions and education and learning programmes. Its first temporary exhibition will focus on key moments in Hungarian pop music from the 1950s to the 1990s. In the future, the space will continue to evolve as the surrounding park space undergoes more transformation. The hope is to establish a genuine community gathering space for Budapest residents and tourists alike — while also memorializing Hungary’s indispensable contributions to the international music scene.

In Budapest, the new museum and concert hall will serve as a cultural landmark and a reminder of the power of music.