A Foliage Filled Office By Space Encounters
Can an office filled with tropical oases improve the health of employees? Space Encounters of Amsterdam is banking on it, with this foliage-filled office in Amsterdam. 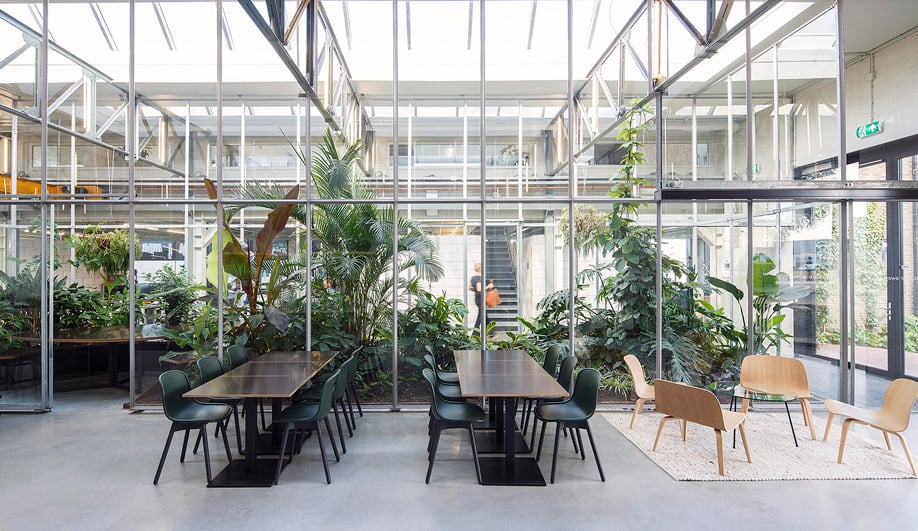 Glass panels make the gardens visible from every angle within the open-plan office and bring light to the core. Chairs by Muuto. 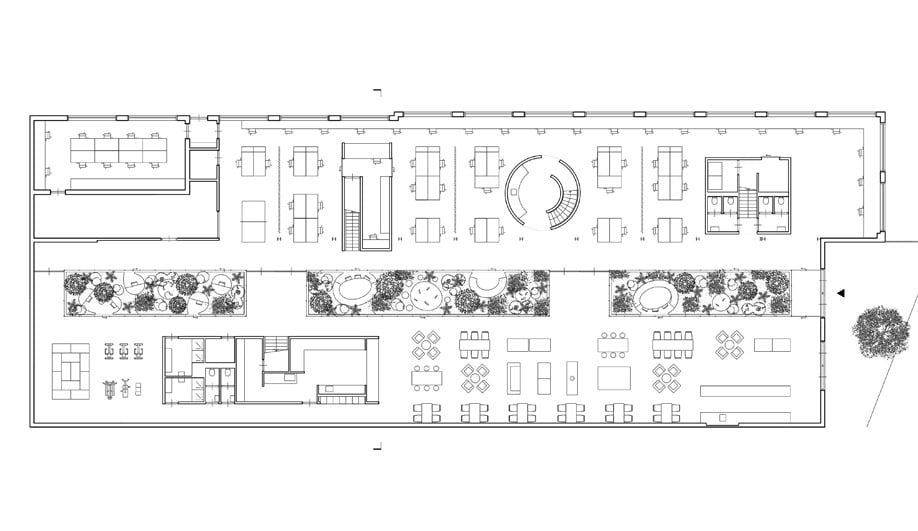 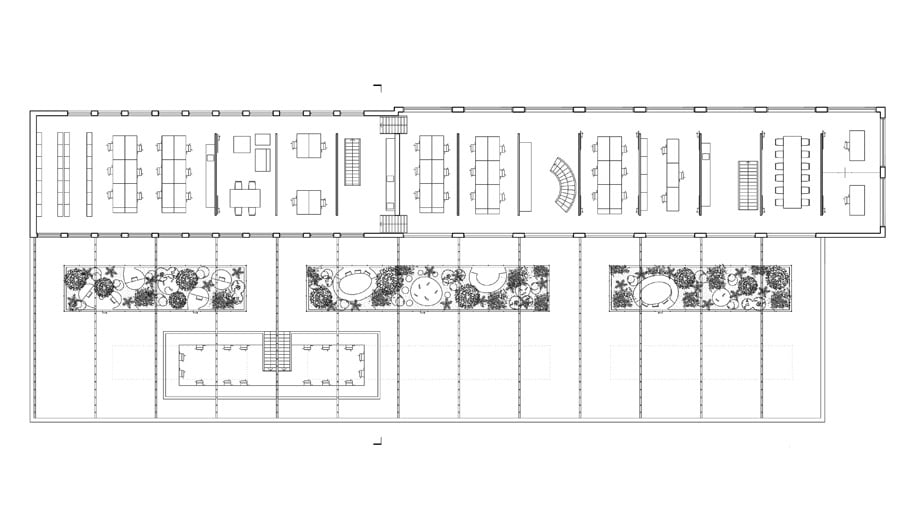 Can an office filled with tropical oases improve the health of employees? Space Encounters of Amsterdam is banking on it, with this foliage-filled office in Amsterdam.

“The last thing an office should be is a living room,” says Joost Baks, co-founder of Space Encounters, a young Amsterdam firm that is quickly gaining a name for itself, in part by challenging the status quo of work environments. One of the firm’s signature projects is a line of office furniture designed for Lensvelt called Boring Collection, and it is intended to be just that: boring. Its defining feature is the uniform matte grey tone of the collection’s task chairs, shelving units, desks and trash cans. The idea, of course, is to let people, rather than furniture, shine within a space. When the line was launched in Milan in 2016, it was a massive hit.

On this spring day, I am meeting with Baks and co-founder Remi Versteeg to discuss their latest architectural project: an office for the Dutch stroller company Joolz, which has morphed into an ever-growing international brand. The space is contained within a former warehouse in Amsterdam-Noord, and its boxy exterior belies an airy, bright and foliage-filled interior. “We wanted to offer an experience,” Baks says, “an energizing environment that feels unique.”

That goal appears to have been attained. Between two wide corridors of open-plan workstations that seat up to 70 employees there is a living forest: a trio of greenhouses that double as concentrative workspaces and meeting rooms, offering alternative places for working on daily tasks or taking breaks.

The goal was to create a space that helps boost creativity and productivity by bringing staff closer to nature.

Designed in collaboration with local green architecture and design firm GrownDownTown, the courtyards house a plethora of exotic plants, from palms to full-grown papaya trees, as well as artificial ponds amid clusters of furniture provided by Lensvelt. Supported by industrial steel beams (a nod to the exposed beams overhead), the glass-encased gardens are the centrepiece – a jolt of green energy inside an otherwise minimalist grey-and-white, hangar-like interior. Openings at the top and bottom let fresh air permeate the building’s 1,600-square-metre sprawl. The purpose of these thriving jungles – besides lowering stress levels simply by giving employees the luxury of looking – is to boost productivity and improve overall well-being.

The greenhouses, which measure 30 by 3.5 metres each, started out as an experiment. “No one wanted to work in them in the beginning,” says Baks. “Most of us are so accustomed to working at desks, even though the best thing for us is to work outside.” He has a valid point. Multiple studies have shown that even just sitting next to a window can increase productivity. One recent study found workers with regular access to a view gained, on average, as much as 46 minutes of sleep at night during the workweek, leading to more productive and creative work hours. Yet, even progressive brands like Joolz need to be reminded of nature’s benefits. The greenhouse concept eventually caught on, and employees now have to sign up in advance to reserve their sylvan work spot.

Employees book time to work inside one of three extensive greenhouses.

Well-being also extends past the office walls. “We were very aware of its location,” says Baks. Amsterdam-Noord used to be one of the Dutch capital’s rougher districts, where a number of abandoned warehouses attracted squatters and vandals. Nevertheless, Baks and his team saw the project as an opportunity to make a beneficial impact. Joolz’s tagline is “Positive Design,” and with that in mind, Space Encounters approached the project as an urban planner might. “The idea was to create a community around the office, to turn it into a beacon or hub, a place where workers and locals want to hang out.”

The first step was to break down barriers between inside and out. In lieu of walls, the firm installed 12 large windows, 10 of which purposely tilt inward at 4.6-degree angles. The slants cast a strategic shadow over the glazing, minimizing reflections that might block views to the inside. In addition to the greenhouse gardens, the office is equipped with a kitchen, a gym, a restaurant, and a café that opens up to the street.

The white cube is a self-contained kitchen that features a stove by Piet Hein Eek.

“Wellness isn’t just personal,” says Baks, “it’s also about the community.” “As architects,” adds Versteeg, “we often think about physical sustainability – how green a building is from a technical perspective – but we don’t talk enough about the social aspect of sustainability.” Continues Baks, “The technical part is pretty easy and straightforward. It’s like making sure a building is waterproof. It’s something that’s to be expected. However, this other part, the social aspect, is really where we can gain something.”

SHARE
Twitter, Facebook, LinkedIn, Pinterest, Email
TAGS
Office,
AZURE is an independent magazine working to bring you the best in design, architecture and interiors. We rely on advertising revenue to support the creative content on our site. Please consider whitelisting our site in your settings, or pausing your adblocker while stopping by.