Spasm Studio Creates a Jungle Villa Near Mumbai
For a weekend family house outside Mumbai, Spasm studio let nature take the lead - and not a single tree was harmed in the process. 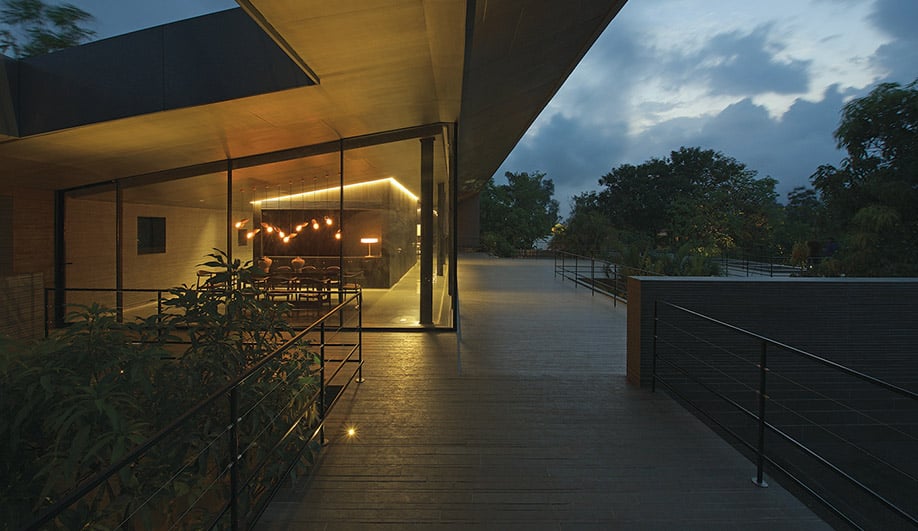 The architects used wall-to-wall glazing to limit barriers between inside and out. The views are particularly dramatic during tropical downpours. 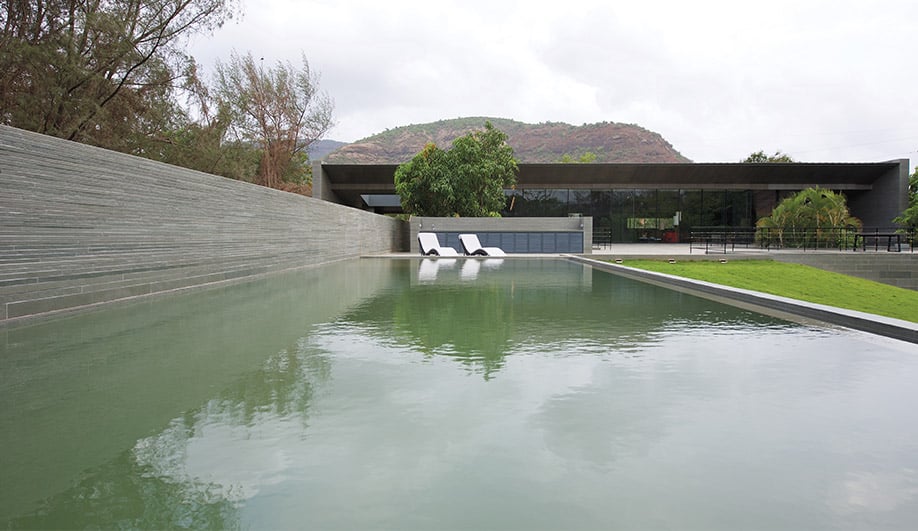 The grassy mound that leads up to the second level deck and swimming pool was built using construction debris from the original house. 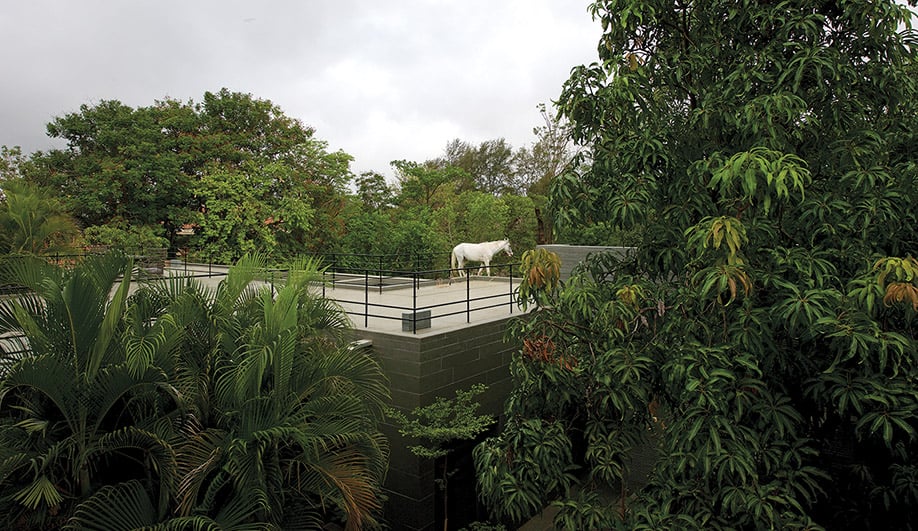 From a distance, the house and its retention walls almost vanish from view among the surrounding vegetation. 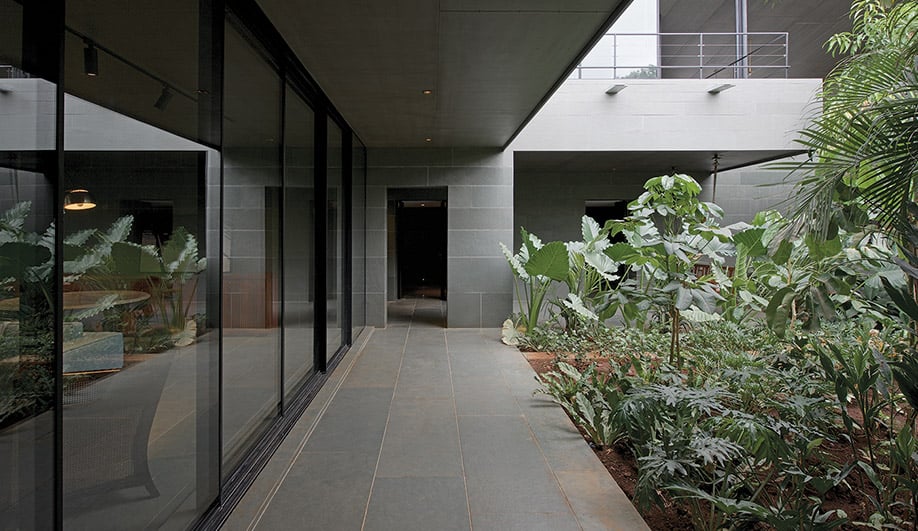 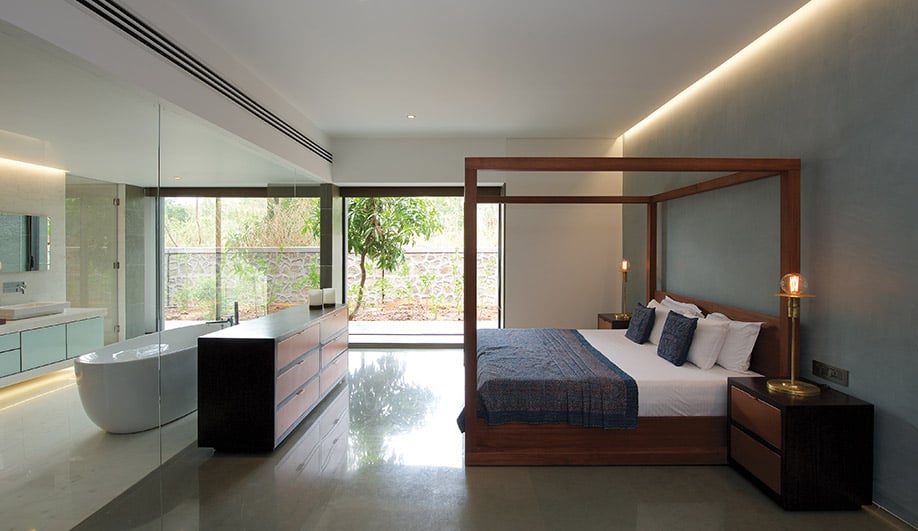 All five bedrooms are located on the subterranean lower level, where the surrounding earth helps temper the air. Bathtub by Roca.

For a weekend family house outside Mumbai, Spasm studio let nature take the lead – and not a single tree was harmed in the process.

When a family commissioned Sanjeev Panjabi and Sangeeta Merchant, partners in the Mumbai-based architecture firm Spasm, to design a vacation home, the site was far from a tabula rasa. Located about a two-hour drive east of Mumbai in the mountainous town of Malavli (a so-called hill station with a cooler climate, where one can escape the searing summer heat), the site was blessed with mature trees and vegetation, but cursed with a dilapidated existing structure. “The house had developed cracks from the foundation all the way up to the roof,” says Panjabi. “And it had been left unused for almost 10 years.”

The typical approach might have been to call in the wrecking crew, knock down the structure, and remove the detritus while levelling the site. But Panjabi and Merchant settled on a different approach that would preserve most of the existing landscape: demolish the building, but bury it in place, and use the resulting mound as a key component of a new 975-square-metre home. “It’s a tropical area with a lot of trees, and we didn’t want to cut down a single one,” says Merchant. “So we built the house around them.”

Two courtyards connect the upper and lower levels, and large slabs of blue-grey Kotah limestone on the floor and walls add to the sense of openness.

Indeed, two verdant courtyards cut through the two-storey home, whose ground level contains five bedrooms, a kitchen and a casual family room. Sunlight and views of nature are abundant here, even though the structure is partially submerged in the mound. The trees and plants in the courtyards existed already. “There were lovely mango trees and bamboo, which we didn’t want to disrupt,” says Merchant. Two bathrooms and a change room for the pool have smaller courtyards. These are covered with a porous mesh that provides privacy and allows natural light and air in while keeping insects out.

Climbing the stairs (or climbing the hill outside) brings you to the expansive second-floor living and dining pavilion. Floors and walls, both inside and out, are finished with locally sourced blue-grey Kotah limestone, and ceilings are covered in cement panels. The architects selected the limestone for its natural aesthetic and rugged functionality in an area where moisture is a concern, and used it four ways: as chips, strips, slabs, and as a curved cove skirting.

“Our monsoons break in this particular place,” says Panjabi. “Because of that, there’s a wild burst of green from June through October, but humidity levels are also very high. Impervious materials like this stone help to hold the moisture back and keep the house maintenance free,” says Merchant.

Inside, furnishings are deliberately minimal, but Spasm designed custom brass light fixtures and hardware, along with many of the wooden pieces, including the beds. Living in the house is a true indoor/outdoor experience, as the corridors between rooms are essentially covered outdoor walkways, and the living and family rooms can be opened up or closed off with sliding glass doors.

For the owners, the completed house – affectionately called the Gomati House, after a grandmother – is a place to gather with their entire family. It’s spacious enough for the couple’s three children as well as grandparents from both sides of the family. “It’s three generations spending time together,” says Merchant. “They use it for a couple of weeks at a time, and come when it’s cool and rainy.” For the architects, who remained sensitive to the area’s natural beauty throughout the process, it was, as Panjabi notes, “a joy to build on this site.”