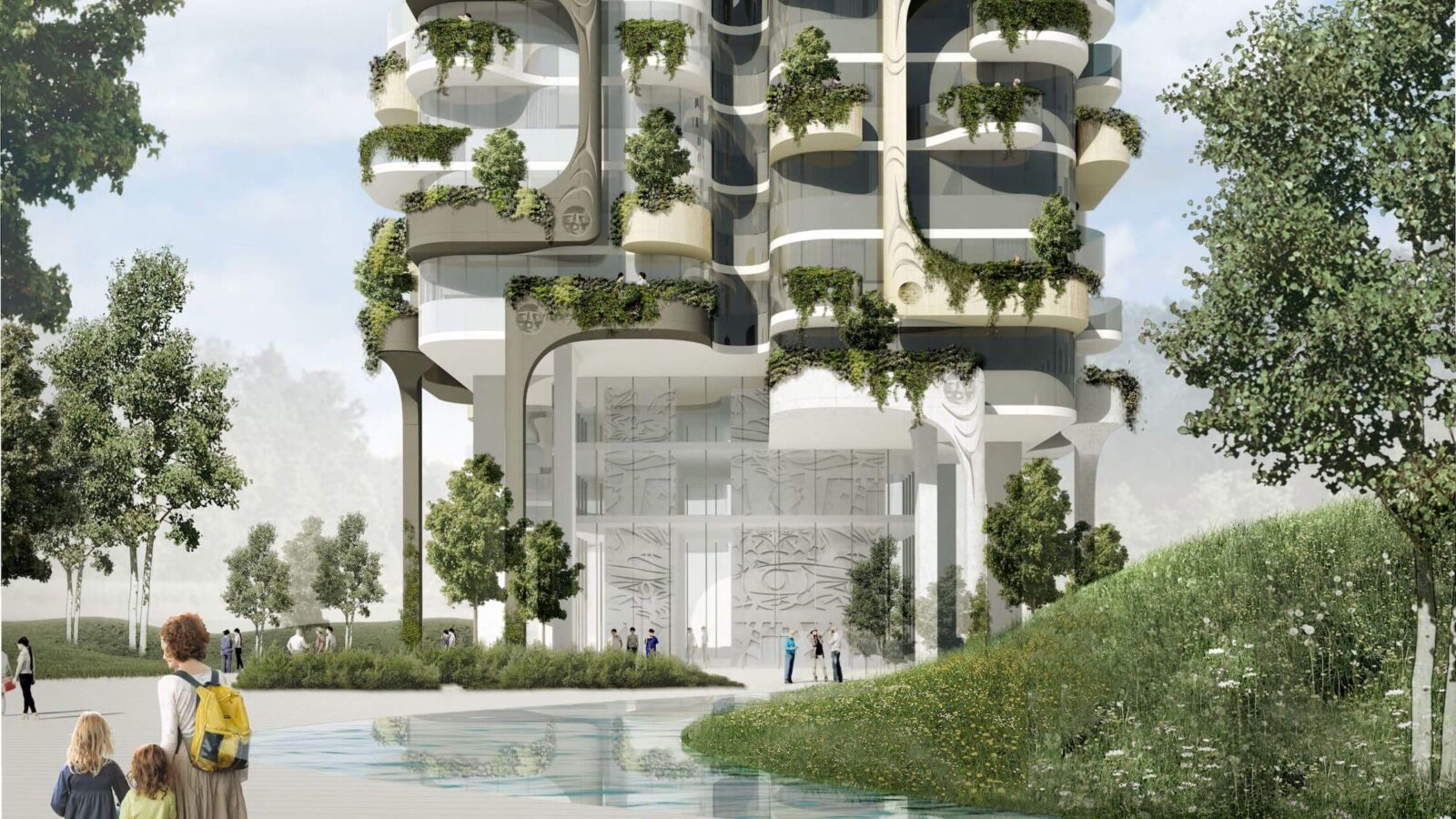 In the heart of Vancouver, the Senakw development proposes another kind of city. In the unceded territory of of the Musqueam People, a First Nations-led plan envisions 11 striking towers on a narrow 11.7-acre site near the foot of the Burrard Street Bridge in Kitsilano, just across the False Creek inlet from downtown Vancouver.

Set to be built on the traditional land of the Squamish Nation, the ambitious community is planned as a partnership with developer Westbank. Designed by Vancouver’s Revery Architecture (formerly Bing Thom Architects), the vision calls for a dense and architecturally expressive community of approximately 6,000 rental units.

With a height peak of 56 storeys, the towers are sculpted to reflect elements of local topography (hinting at tree-lined mountains and blue skies), while subtly evoking totem poles. The renderings also depict lush greenery woven through the site, stretching from the ceiling of an underpass to the tips of towers.

Although the plan – which would involve 50-50 profit-sharing with Westbank – is subject to approval in a December 10 referendum of Squamish Nation’s 3,000-odd members, stewardship of the Indigenous-owned land falls beyond the purview of the City of Vancouver. As such, municipal zoning, site planning, and bylaw regulations do not apply to the site, allowing the Squamish Nation to develop the site with few regulatory restrictions.

Aesthetically rooted in Indigenous culture and history, Senakw boasts an unmistakable visual identity, though the project is also strongly defined by a progressive urban planning approach. Proposing greater density, the plan eschews the city’s parking minimums (providing only one space per every 10 units), while also breaking away from the Vancouver planning orthodoxy of building point towers atop a low-rise podium streetwall.

Senakw’s slender towers would mostly rise without a bulky base, making for a green and open milieu where approximately 80 per cent of the site earmarked for parks and publicly accessible spaces. Ironically, through bypassing regulations, the pedestrian-oriented and permeable site plan could make for a more open and attractive place. Not everyone is likely to agree.

The tower heights, in particular, may prove a sore point for neighbours. “Residents of Kitsilano have traditionally opposed buildings of more than a few storeys, and community activists earlier in the year said they hoped the Squamish would consult them on the project,” notes Frances Bula in the Globe and Mail. Jane McFadden, executive director of the Kitsilano West 4th Avenue Business Association, voiced similar concerns. “I can only imagine the uproar of residents,” McFadden told the CBC.

But the decision doesn’t belong to Vancouverites – nor should it. Next month, the future of the site will be decided by members of the Squamish First Nation.