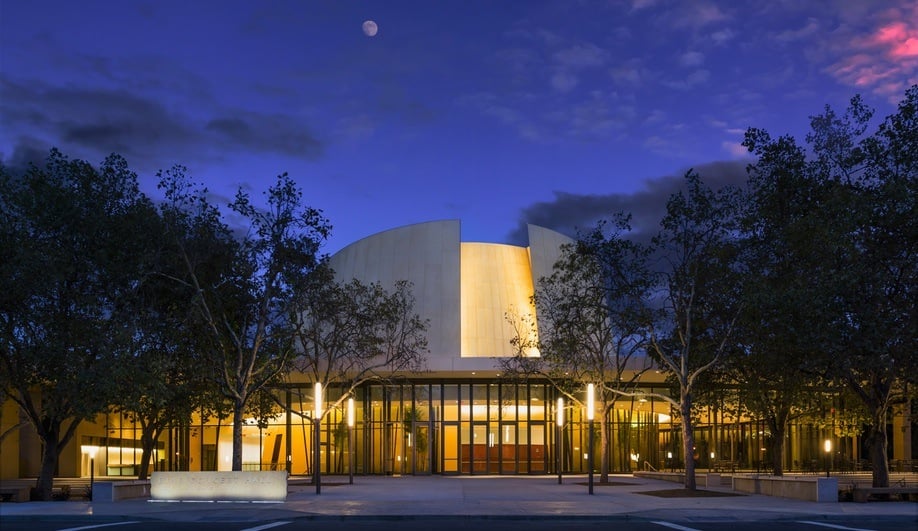 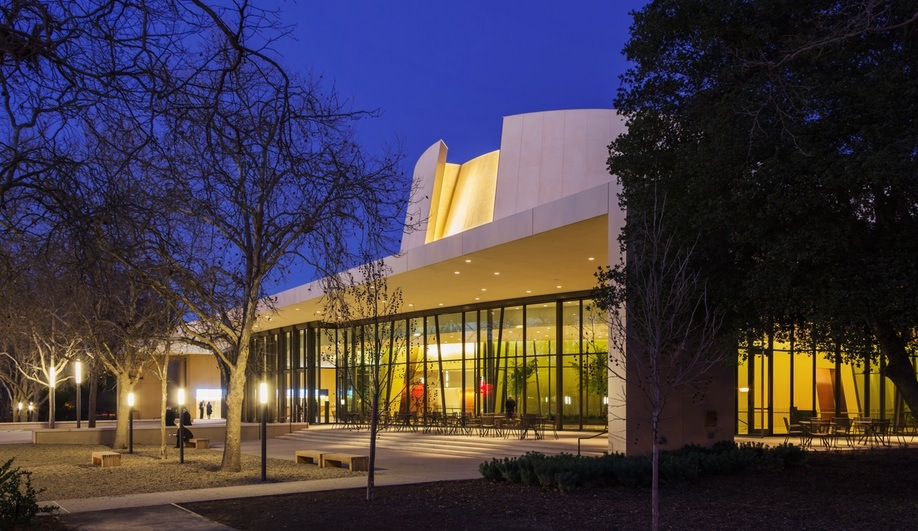 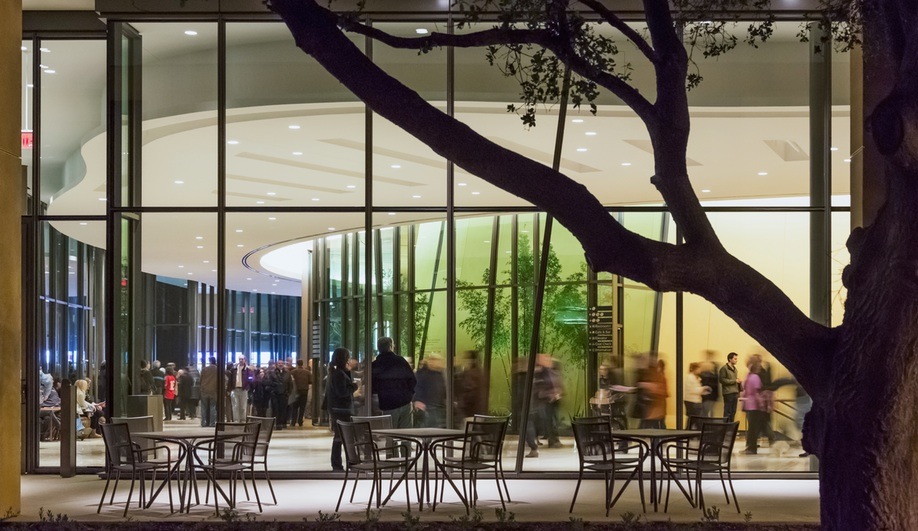 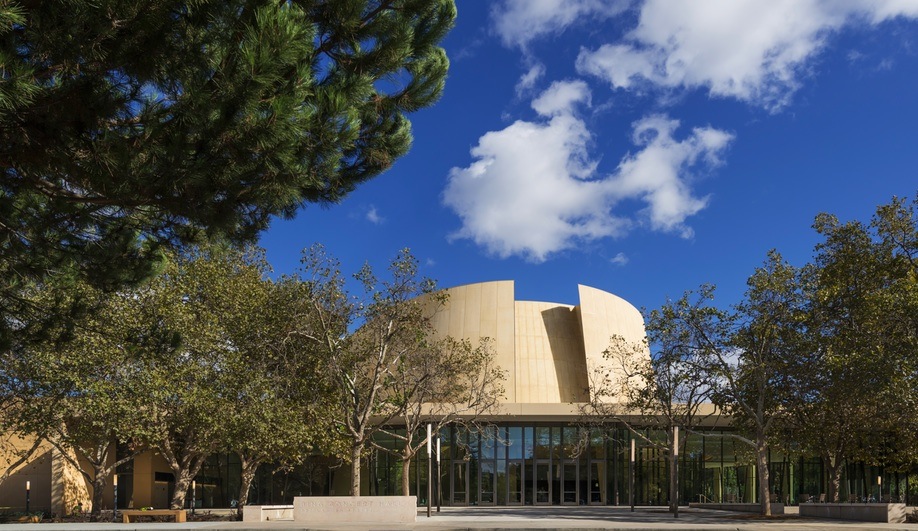 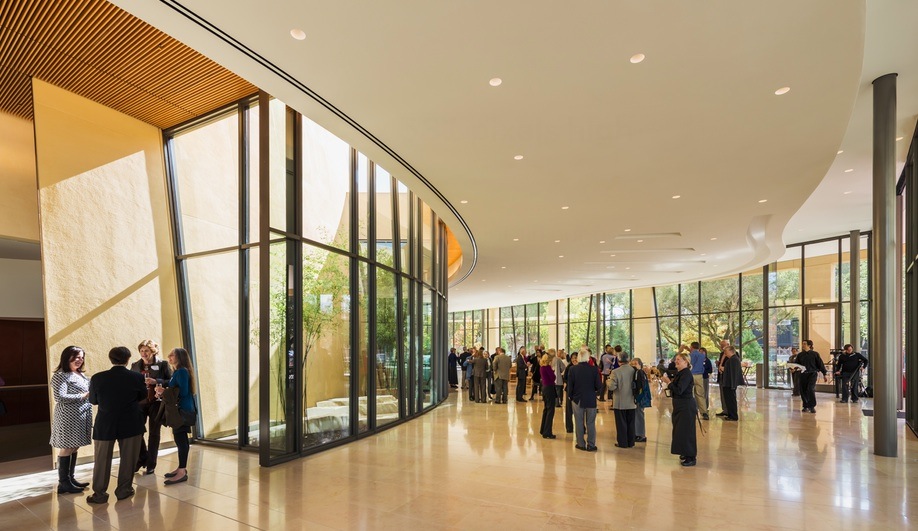 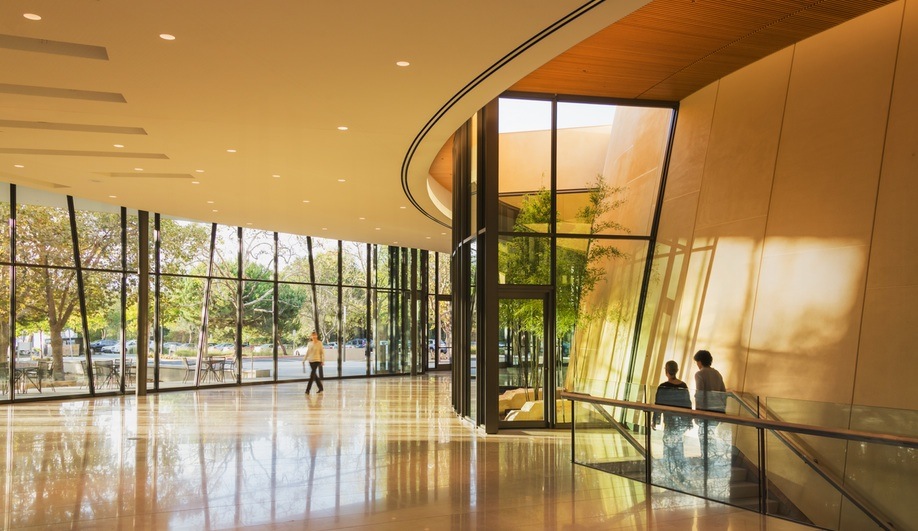 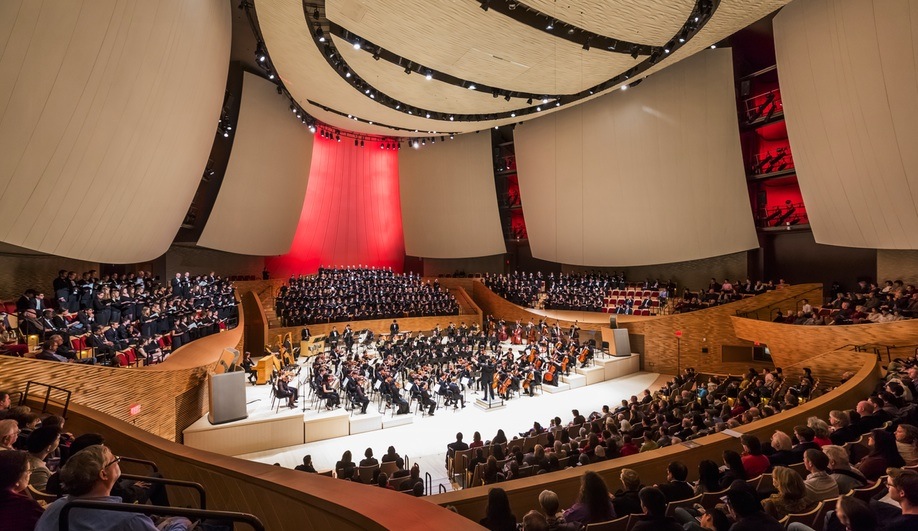 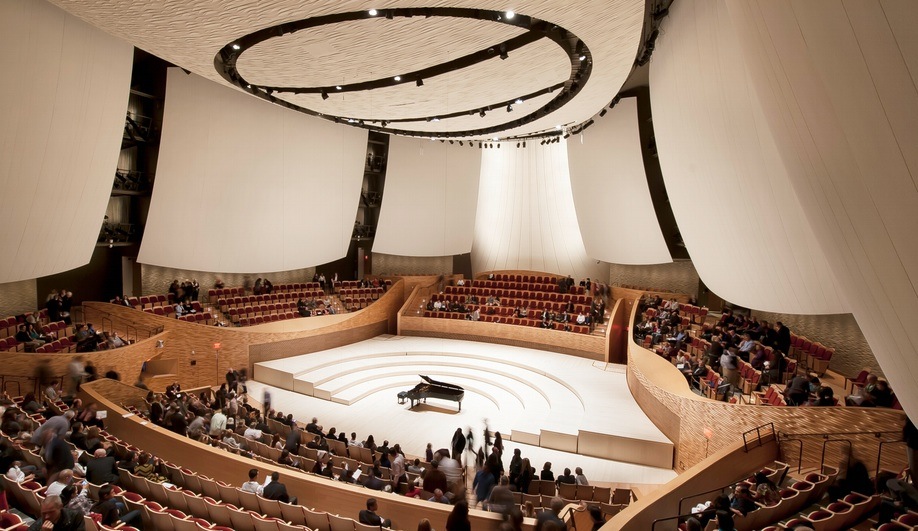 Stanford’s new hall turns a visit to the symphony into a passage through a series of atmospheric spaces nested like Russian dolls. The acoustically superlative 1,470-square-metre auditorium provides a venue for students, faculty and the Stanford Symphony and Philharmonia Orchestra, and is ringed by a magnificent 360-degree lobby with views of the surrounding landscape.

One of the hall’s key architectural functions is to connect the sprawling tree-studded campus park with the grid of Stanford’s pre-existing architecture, particularly the university’s growing Arts District. Approaching through this wooded setting, concert-goers are greeted by a wide terrace that eases into the grand lobby entrance.

The terrace’s grey stone pavers seem to radiate from an unseen point at the centre of the building, and form a large veranda set to one side, ideal for holding outdoor events on warm California nights. The building’s slab-like roof extends to the edges of the terrace, a protective overhang supported along the veranda by pillars that echo Stanford University’s traditional architecture.

Inside, the lobby’s sand-coloured floor tiles extend the radiating pattern of the terrace pavers. The visual continuity of these converging lines is broken only by a six-metre glass-and-aluminum curtain wall that winds an irregular path along entrance and veranda, visually linking the lobby to the surrounding landscape. On two sides, lounges, rehearsal spaces and recording studios are separated from the main concert space, almost like outbuildings, to provide an acoustic buffer.

At Bing’s heart is the main auditorium, an elliptical cradle of 30-centimetre-thick concrete separated from the lobby along most of its perimeter by a second glass curtain wall. The gap between the auditorium and this interior glazing forms a plant-filled light well, and an additional acoustic barrier between the lobby and the hall that further improves the soundproofing.

Inside the auditorium, the 844 seats are never more than a mere 23 metres from the conductor, ensuring every performance feels intimate. For crystal-clear sound, lead acoustician Yasuhisa Toyota of Nagata Acoustics designed massive sound-directing sails that trace the contours of the walls and ceiling, and can double as screens for projected video.

The beech cladding on the seating area’s dividing walls and the yellow Alaskan cedar used for the stage were also chosen for their acoustic properties – crucial details for a space that will primarily host un-amplified performances.

SHARE
Twitter, Facebook, LinkedIn, Pinterest, Email
TAGS
Cultural, Education,
AZURE is an independent magazine working to bring you the best in design, architecture and interiors. We rely on advertising revenue to support the creative content on our site. Please consider whitelisting our site in your settings, or pausing your adblocker while stopping by.