Introducing Marmoreal, The New Marble
With the help of British designer Max Lamb, architectural surfacing company Dzek has launched a composite that boasts a range of exciting uses. 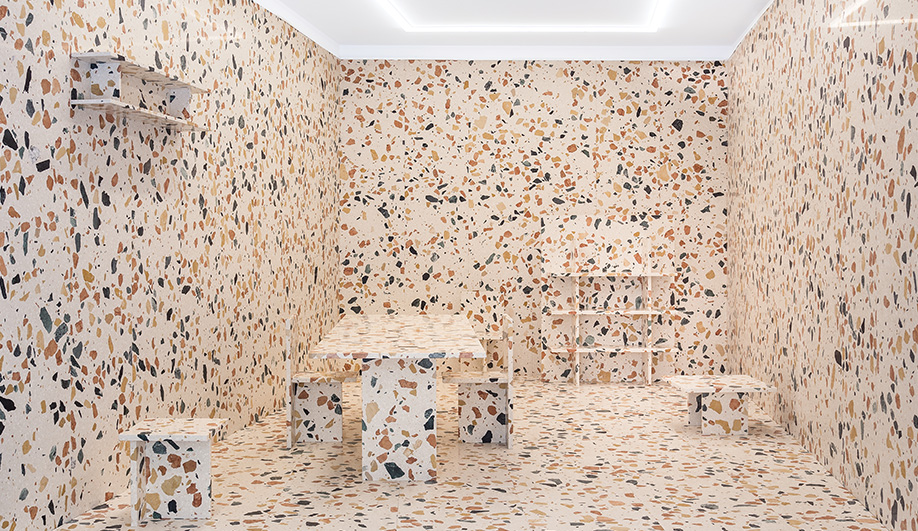 Called Marmoreal, the new material debuted during iSaloni in Milan, with a display that covered an entire room at Project B gallery. 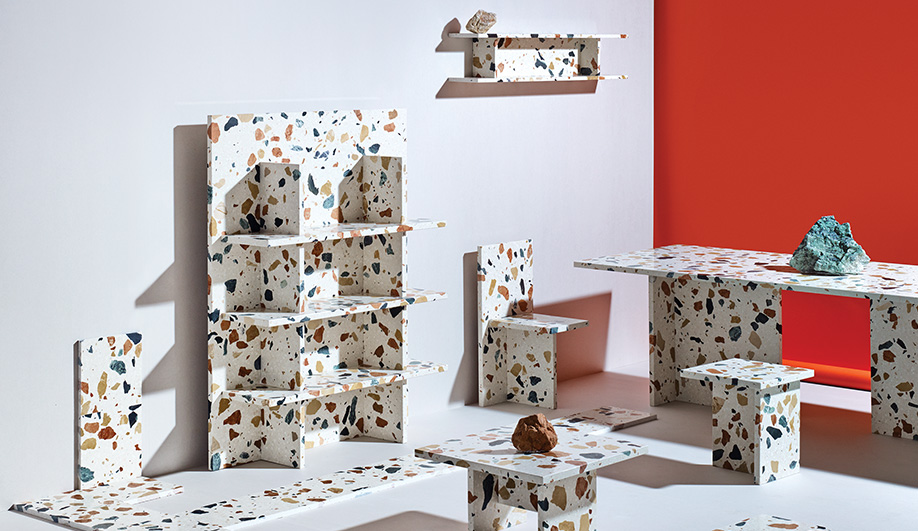 The company envisions the new architectural surfacing as having multiple applications, including furniture. 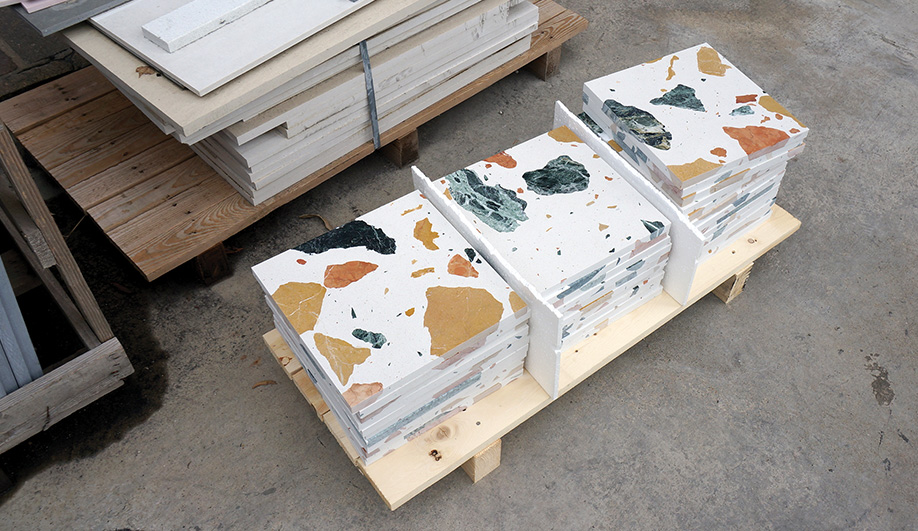 The composite is now available in 1.2-by-three-metre slabs and a range of tile sizes.rn 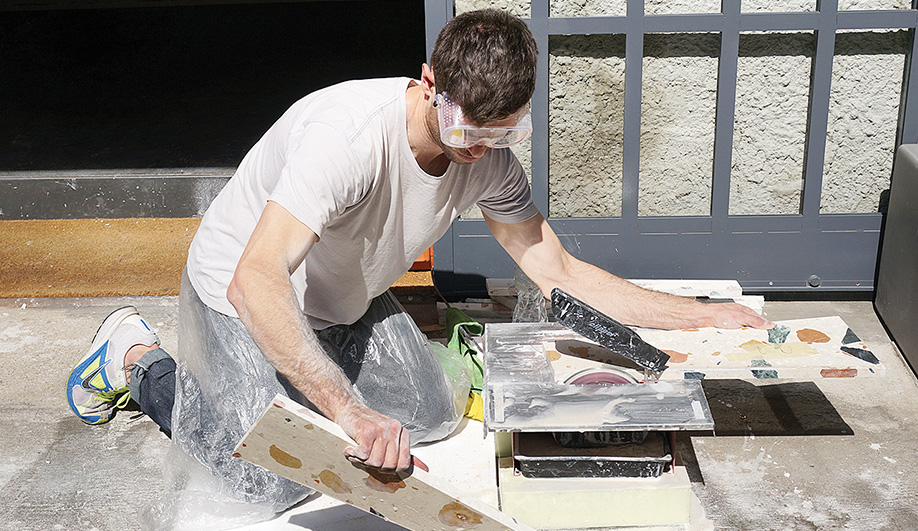 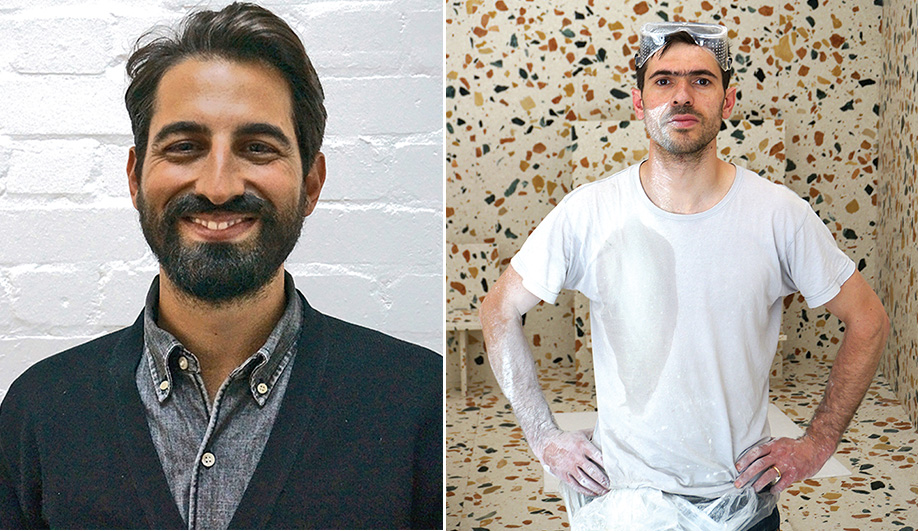 Left: Brent Dzekciorius started Dzek to develop on­going collaborations with craft-­oriented designers. Right: Max Lamb, who has worked with Dzekciorius before, is well known for designing material-based products. For Marmoreal, he sought to create an aggregate that would reveal rather than hide the stone’s distinctive characteristics.rn 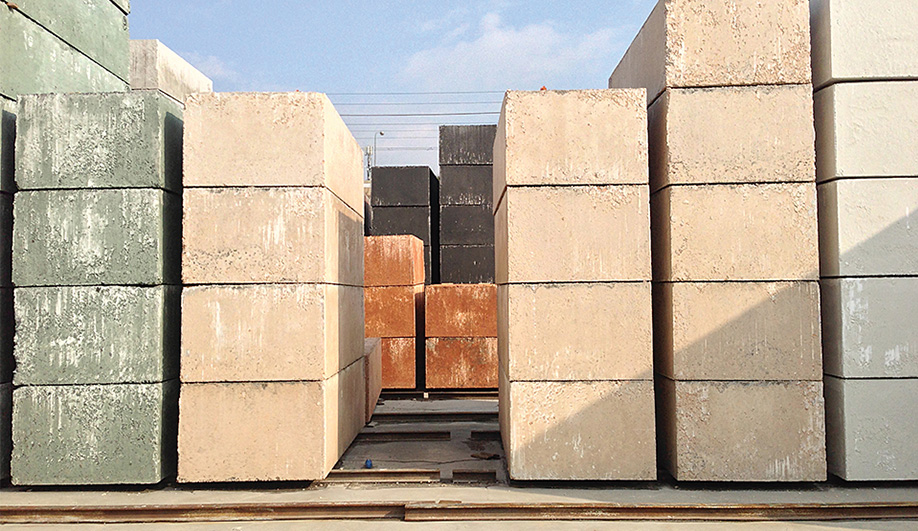 Dzekciorius and Lamb worked closely with chemists at a stone factory outside Verona, Italy, to develop Marmoreal’s composition of 95 per cent marble and 5 per cent polyester resin.rn 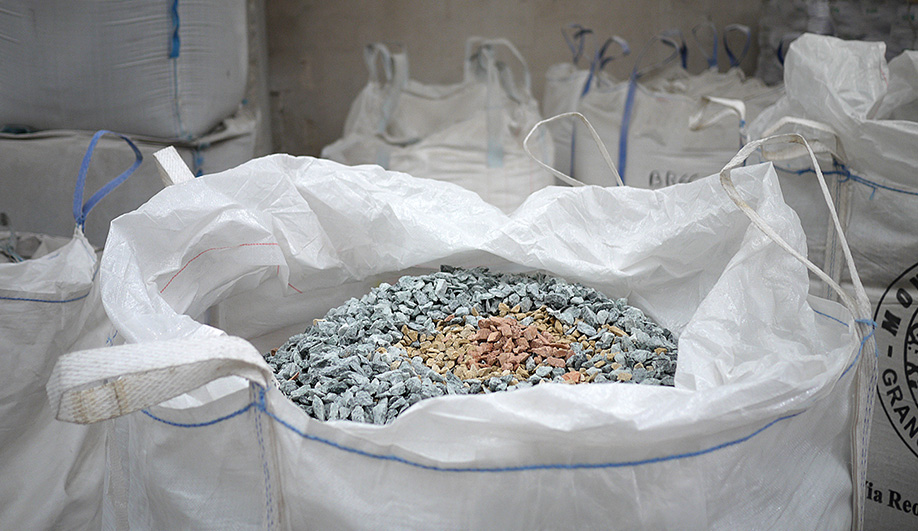 The granules that make up the material include four types of stone, in shades of red, green, yellow and white.

With thousands of product launches and endless cathedral-sized displays of high-end furnishings on view, it’s hard for a fledgling company to stand out amid the din of Milan Design Week. Yet at Project B gallery last spring, a small but impressively realized installation commanded attention for its vision and ambition. Marmoreal, a new multi-chromatic engineered marble, was presented in an immersive display that saw the walls and floor of one room covered in the composite, with matching furniture camouflaged throughout. Those who saw the display raved about the originality of the idea, the beauty of the material and, above all, the possibilities it offered.

The development process, two years in the making, arose from a collaboration between London designer Max Lamb and Dzek, an architectural surface company also based in London and founded by Brent Dzekciorius. Unlike terrazzo, which uses granules and chips of marble mixed to form an even pattern, Marmoreal features particles of various sizes – some delicate and fleck-like, others as big as a baby’s palm – which appear to float in an iridescent soup of milk. The results are very graphic.

Lamb is well known for integrating the construction of his products as a readable aspect of their final form, and Marmoreal also displays that trait. In recent years, he has shaped stools from single sheets of metal (for Discipline); and for the British ceramics company 1882 Ltd he carved milk jugs, plates and bowls out of plaster blocks using stonemasonry tools. Later cast in fine bone china, the crockery looks almost comic, like something Fred Flintstone might use, its chunky forms and uneven edges revealing every gouge of the chisel.

To develop Marmoreal (which comes from a single factory near Verona, Italy), Lamb and Dzekciorius experimented with different combinations of stones, and particle sizes that would play up the stone’s attributes rather than disguise it with uniformity. They settled on four types bound into an aggregate with polyester resin. The final roll call includes Rosso Verona, Giallo Mori, Verde Alpi, and Bianco Verona, the last one chosen over Carrara after the pair found that the more widely used marble’s translucency and porousness caused halos around the resin.

Dzekciorius describes his collaborator as a relentless perfectionist: “Max has a thorough understanding of what he is working in, and he was rigorous in determining what the quarry was best at and where he could push them.” Of Dzekciorius, Lamb says he provided an ideal platform from which to bring the concept to production, adding, “Not many companies would go near something like this, given the research involved.” In fact, the initial 10-tonne block produced as a prototype failed entirely, as the composite cracked when the cutters tried to turn the blocks into slabs.

Dzekciorius is charmingly humble, yet the native New Yorker has demonstrated a talent for initiating effective collaborations, a skill he honed over years in the city’s design-art world, at one point working with Murray Moss, owner of the now-defunct Moss Gallery. In 2010, he moved to London to head up retail operations for the inter­national auctioneer Phillips. While there, he curated Nendo’s lauded Thin Black Lines exhibition, installed in 2010 at the Saatchi Gallery. A year later, he commissioned Faye Toogood to conceptualize a furniture collection that explored the theme of iridescence. “He gave me what I thought was an impossible challenge,” she recalls, “to design and produce 10 pieces in four months, all at a standard I had never worked to before.” He also urged her to push for pieces that were more than just sculptural but also functional.

Dzekciorius left Phillips last year to focus exclusively on an idea he had kept on the back burner for several years: a collection of furnishings and products based on ongoing collaborations with designers. “I didn’t want to simply manufacture rare things,” he says. “I wanted to do something between full-scale industrial production and the gallery model, something that could have more impact and be more accessible.”

The partners are keen to demonstrate Marmoreal’s wider applications. “It can be a floor or a bench – it doesn’t have to be a complete world,” he says. Launching the surfacing in Milan, at a fair primarily devoted to furniture, enabled potential clients to see the domestic possibilities. The stone is now available in 1.2-by-three-metre slabs and a range of tile sizes. There are also plans afoot to develop a different, perhaps darker, version, though that presents complications. In its current form, Marmoreal consists of 95 per cent marble and five per cent bonding polyester, explains Dzekciorius: “Various marbles work differently with the resin, so you can’t apply the percentages broadly.”

So far, he has managed to finance the project, which is now breaking even, with the bespoke pieces he commissions for private clients. “It has been a big investment,” he admits nervously, though the next Dzek product is already underway. “We are researching steel, earth and clay,” he says without revealing the name of his new collaborator. Whoever it might be, based on Marmoreal’s initial outing, the results should be spectacular.

SHARE
Twitter, Facebook, LinkedIn, Pinterest, Email
TAGS
Architectural Products, Materials,
AZURE is an independent magazine working to bring you the best in design, architecture and interiors. We rely on advertising revenue to support the creative content on our site. Please consider whitelisting our site in your settings, or pausing your adblocker while stopping by.