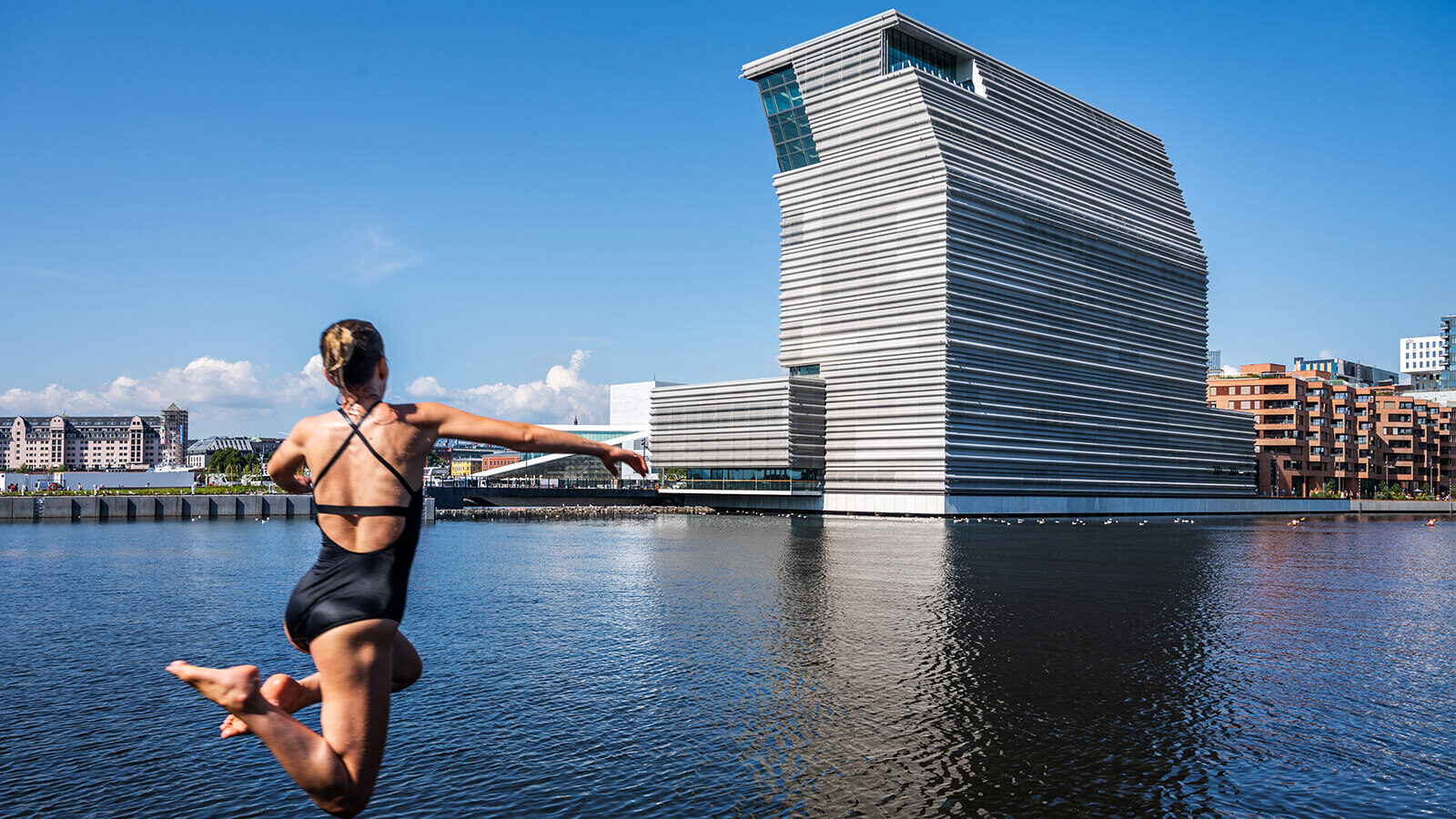 Few art pieces evoke the angst of recent times quite like The Scream by Edvard Munch. An icon of the Expressionist movement, the radical painting is as relevant today as it was at the time of its creation in 1893. But although it is Munch’s singularly famous work, the Norwegian artist experimented in a diverse array of media (including woodblock prints, lithography and photography) and genres (from portraiture to landscapes). Now, in the city where he began his career, a newly reimagined museum is shedding light on his incredibly prolific, if otherwise little-known, oeuvre.

Spanish firm Estudio Herreros has designed the eponymous museum in Oslo as a striking structure that honours Munch’s eccentric style. Its vertical massing, which strays from the norms of typical institutional architecture and the idea of the minimal white box, is perhaps its most unconventional feature. Clad in translucent perforated aluminum, the building is rendered with an almost industrial quality. And it boasts impressive sustainability credentials to match its innovative design. (More on that later.) 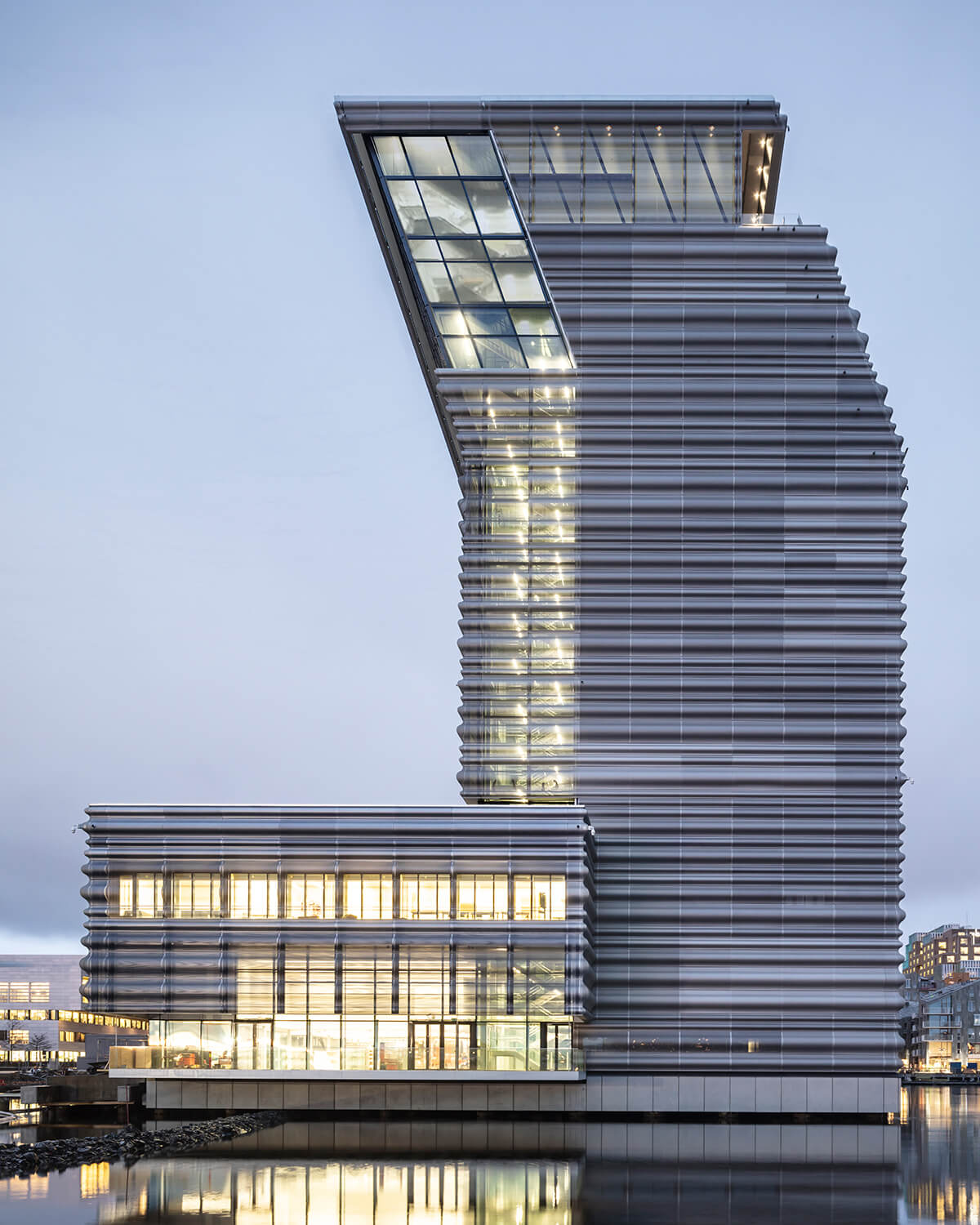 The new museum will be one of the world’s largest dedicated to a single artist. Quadrupling the original location’s gallery space with 11 exhibition halls, it will also host the most expansive permanent selection of Munch’s output, which comprises over 26,700 pieces donated to the city of Oslo upon his death. Temporary exhibitions, meanwhile, will showcase the artist’s influence on his contemporaries in Norway and internationally. 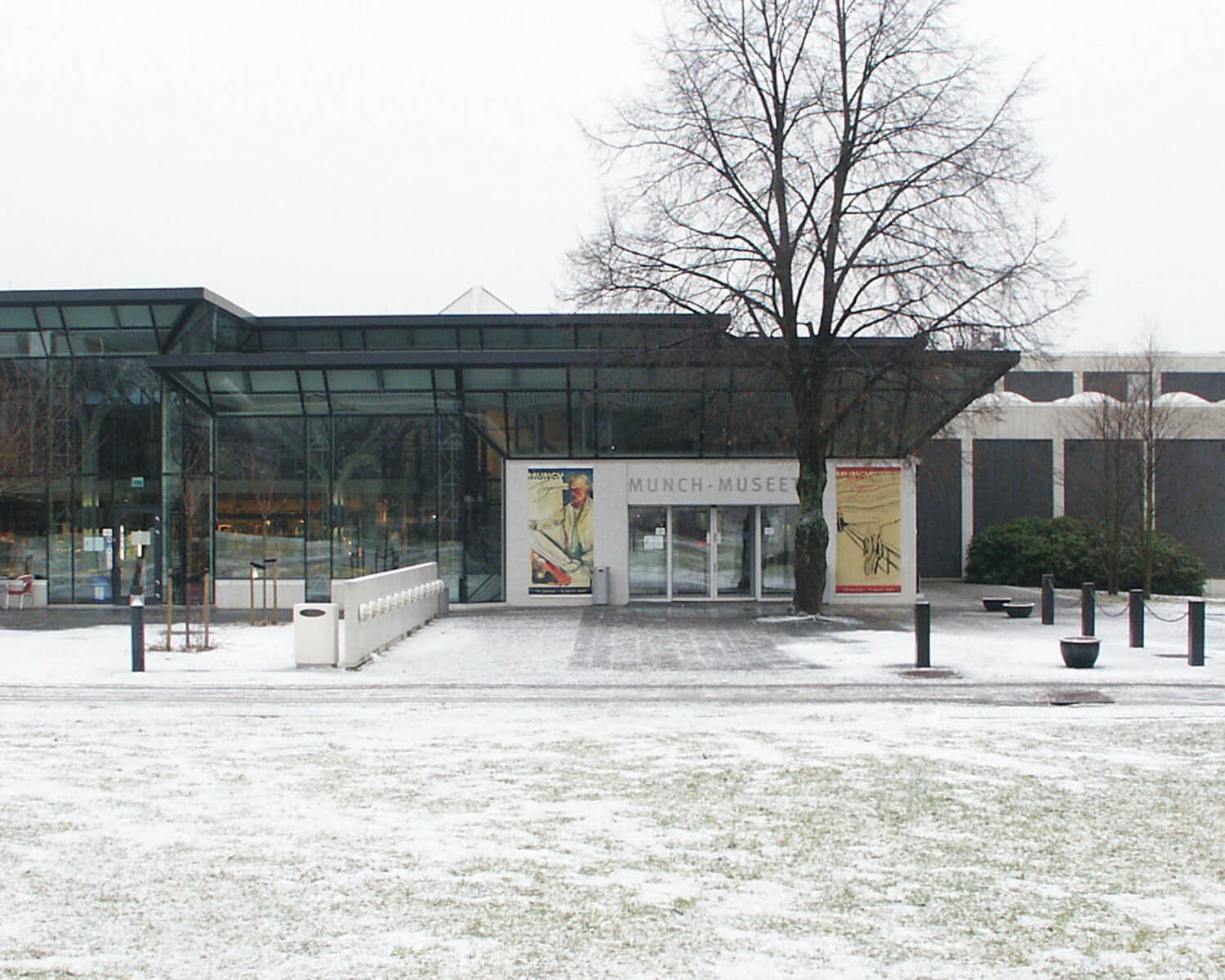 The first Munch museum was located in Oslo’s central residential neighbourhood of Tøyen. Completed in 1963 to commemorate the artist’s 100th birthday, its pared-down design hardly reflected his affinity for the avant-garde. In stark contrast to its predecessor, the new edifice joins a budding cultural — and architectural — hotbed on Oslo’s waterfront; it’s situated adjacent to Snohetta’s Oslo Opera House and the nearby Deichman library. Building up rather than out, the structure bows over the Oslo Fjord — an unorthodox design move that stands out within the city skyline. 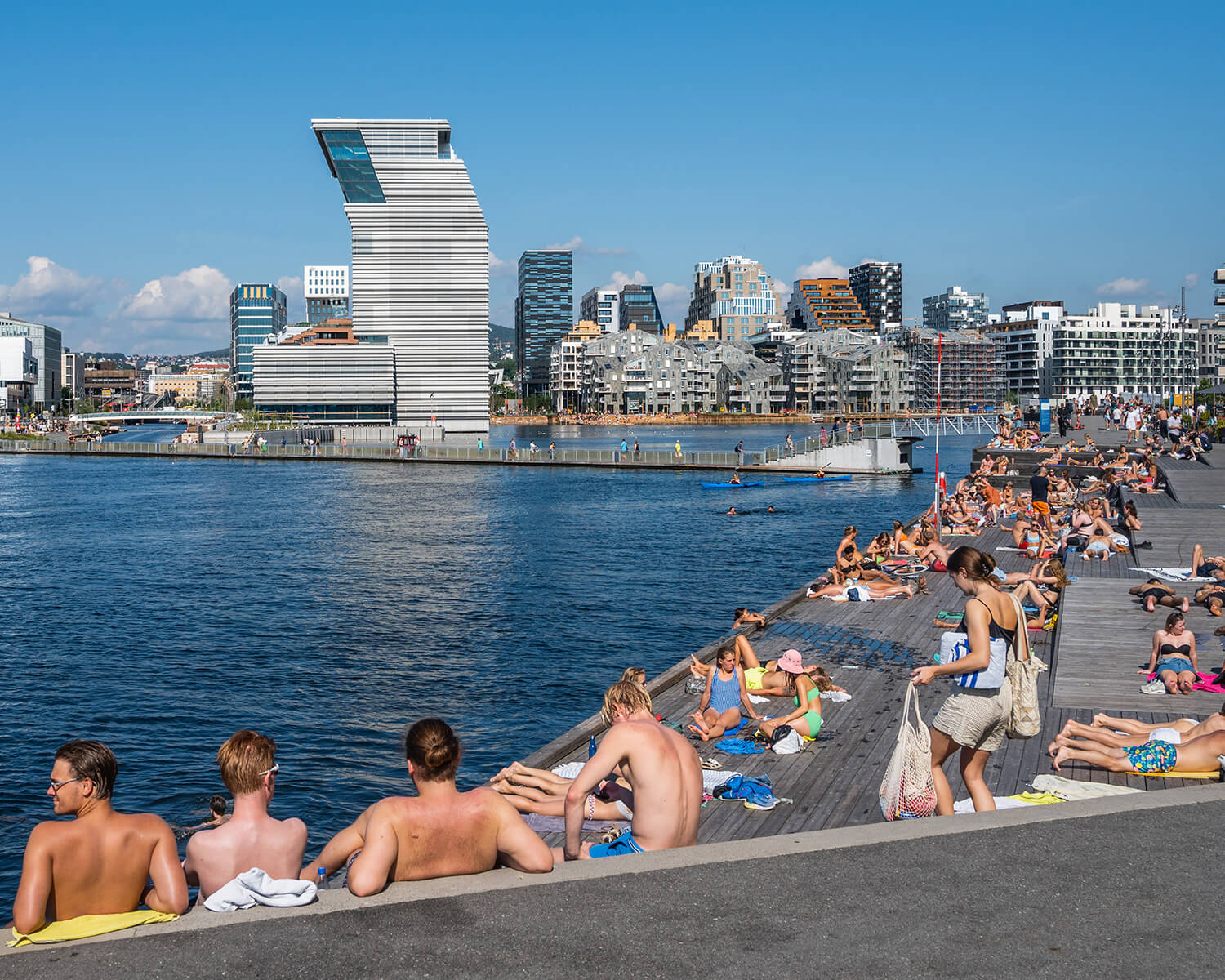 The building doesn’t just defy architectural convention; it also resists the inherent exclusivity of traditional institutions, and by proxy, the realm of high art. With galleries located in the tower’s upper floors, the podium acts as an extension of public space. Designed to fuel social encounters, the lobby is a true public amenity, with access to a shop, restaurant, multi-purpose hall, library, and other educational facilities. The museum’s research and conservation facilities will also be open to all, offering insight into the preservation of Munch’s work. 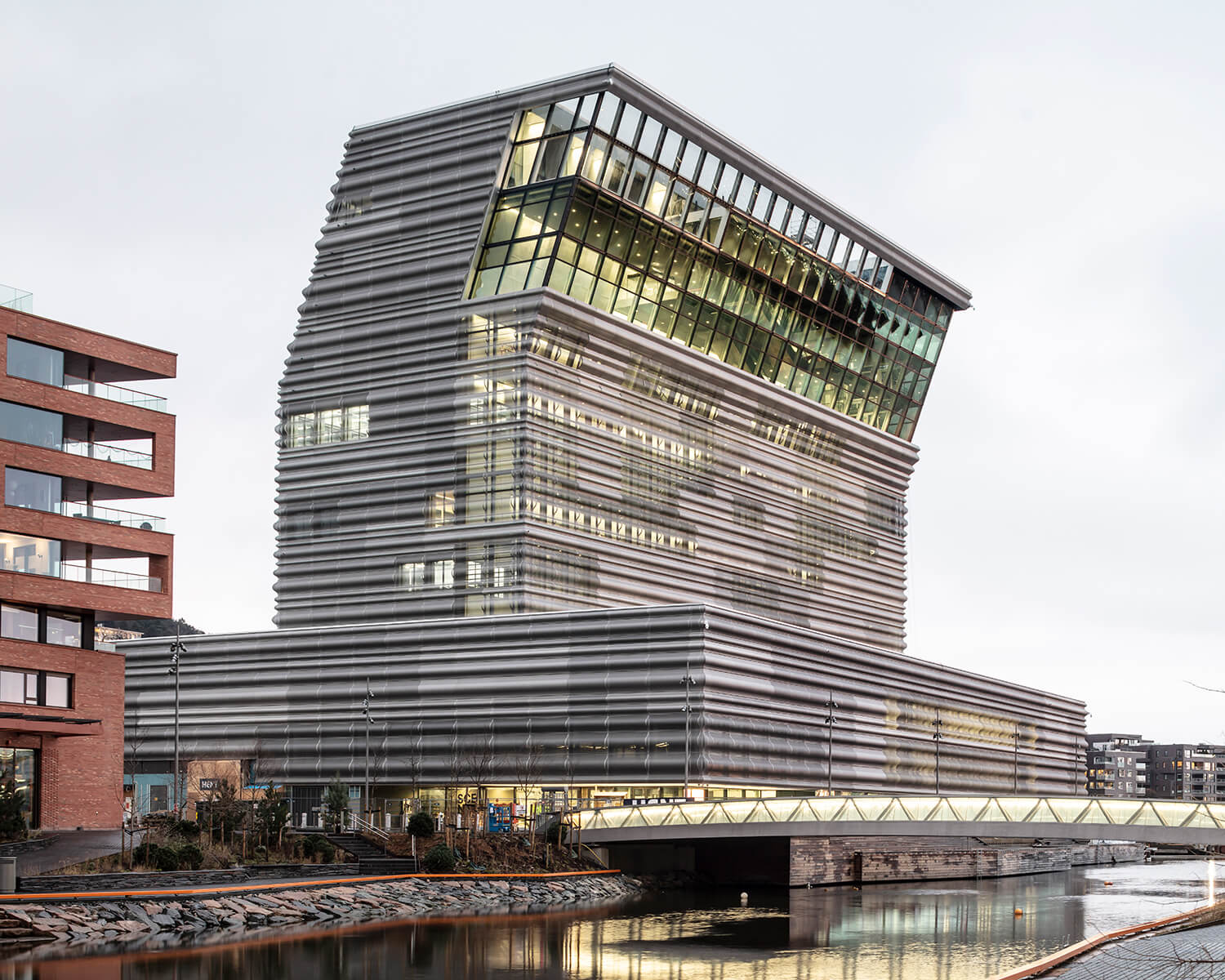 Estudio Herreros’ design thereby embodies a rising trend in institutional architecture to prioritize public space. It’s flexible enough to encourage regular use, whether for visits to the galleries or for casual social gatherings, with a rooftop observatory that offers a sweeping panorama of the Oslo Fjord — a fitting design choice given Munch’s connection to his native city. 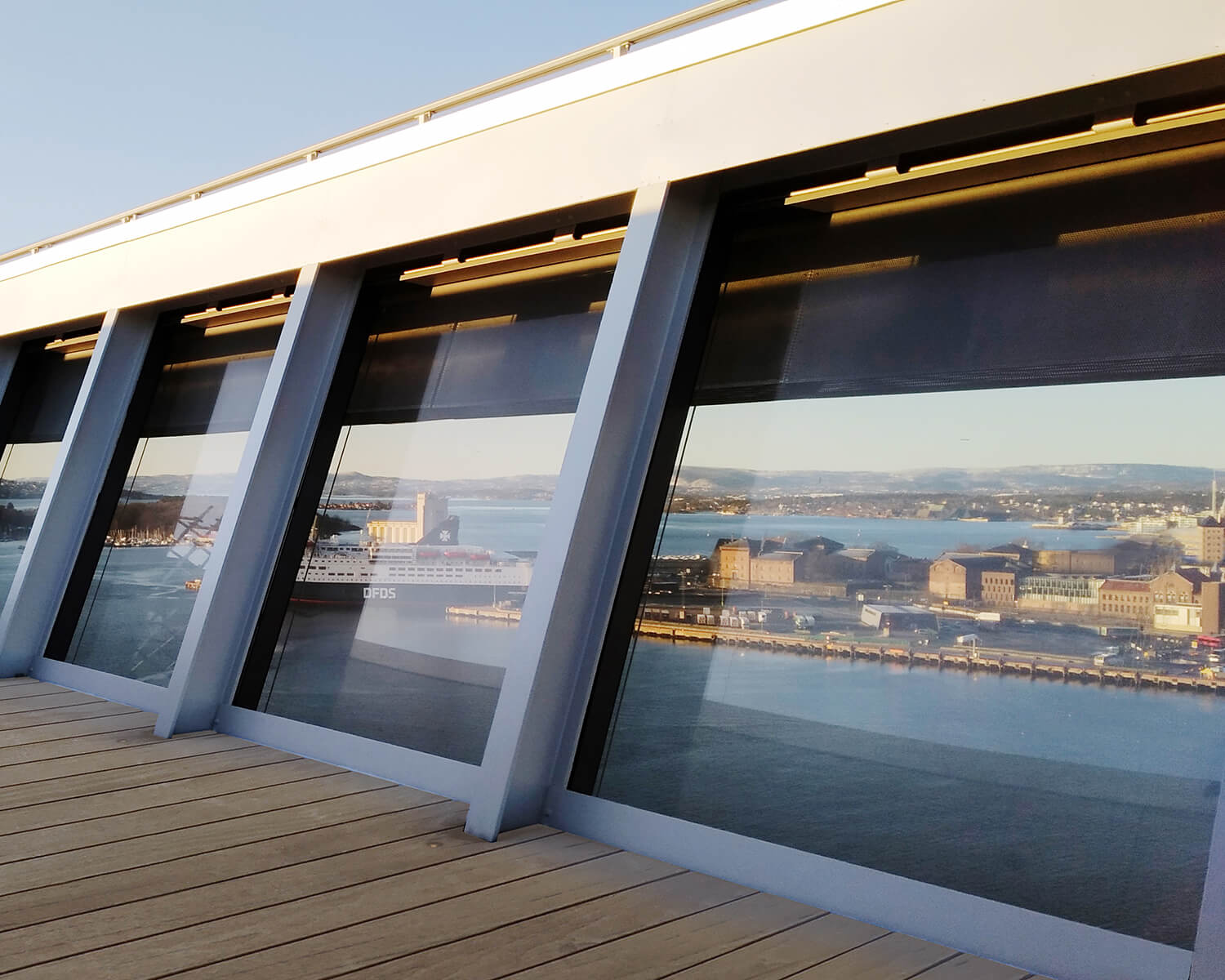 The building’s verticality, though unusual for a gallery, is advantageous for more than just the views. The 13 floors, linked by a public circulation core that provides further vantage point onto the exterior surroundings, also helps the museum comply with COVID-19 public health measures: This linearity separates visitor flows and offers a continuous path through the gallery space. 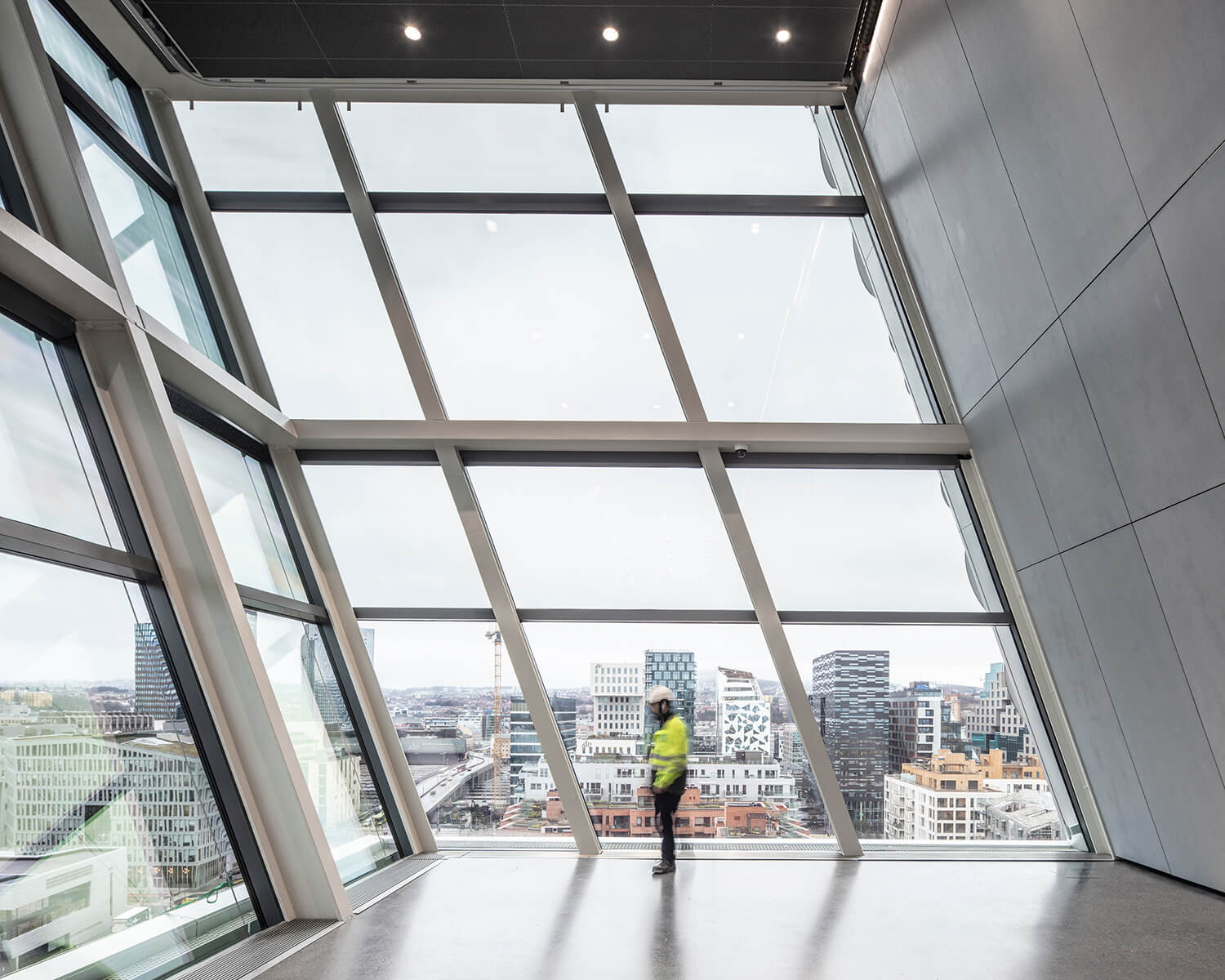 By stacking the galleries, the architects were also able to achieve spaces of different sizes and heights to accommodate the various media on display. While Munch’s prints on paper are contained in more intimate galleries, larger works such as The Sun mural, measuring eight metres high, are displayed in appropriately monumental spaces. As for The Scream, visitors will find 14 iterations of the iconic work, from initial sketches and an early pastel study to the most recognized version, painted in 1910. 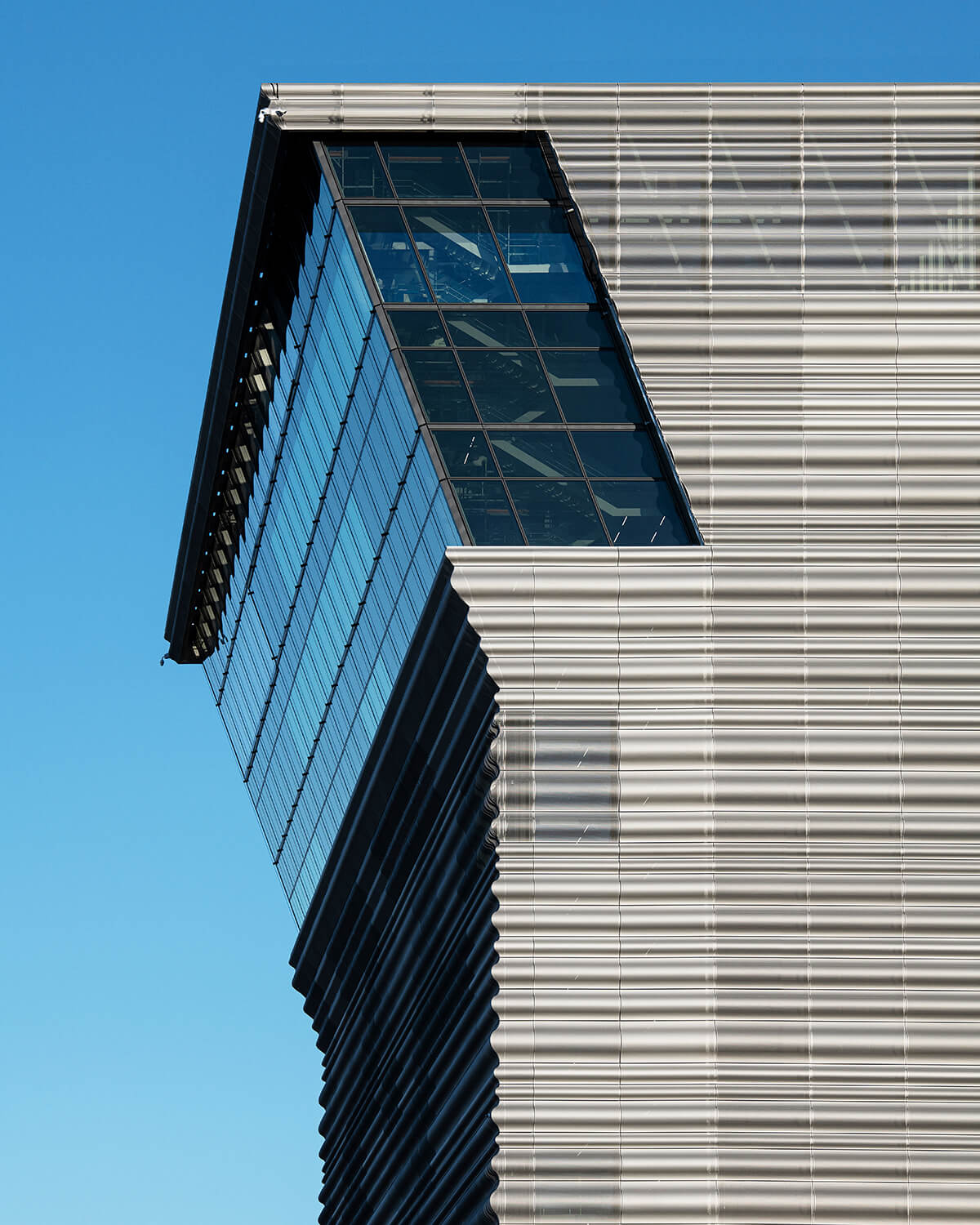 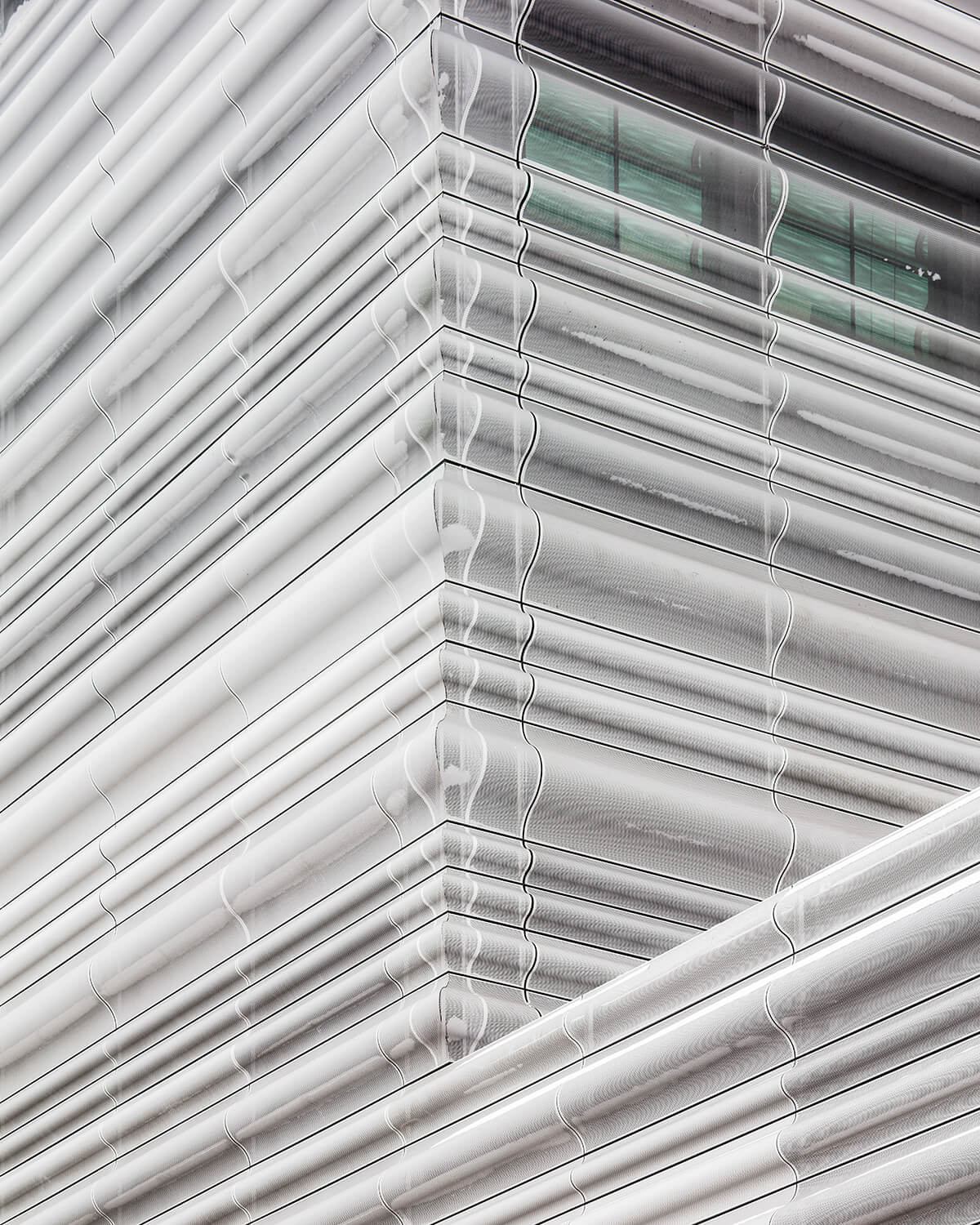 Made with recycled material, the facade is part of the building’s sustainable design, which also includes low-carbon concrete and incorporates natural ventilation. As a result of these and other measures, the structure is compliant with Future Built, Oslo’s program to reduce greenhouse emissions by 50 per cent, and meets Passive House standards. With a 200-year technical lifetime, the museum is designed to endure, much like its namesake’s legacy. 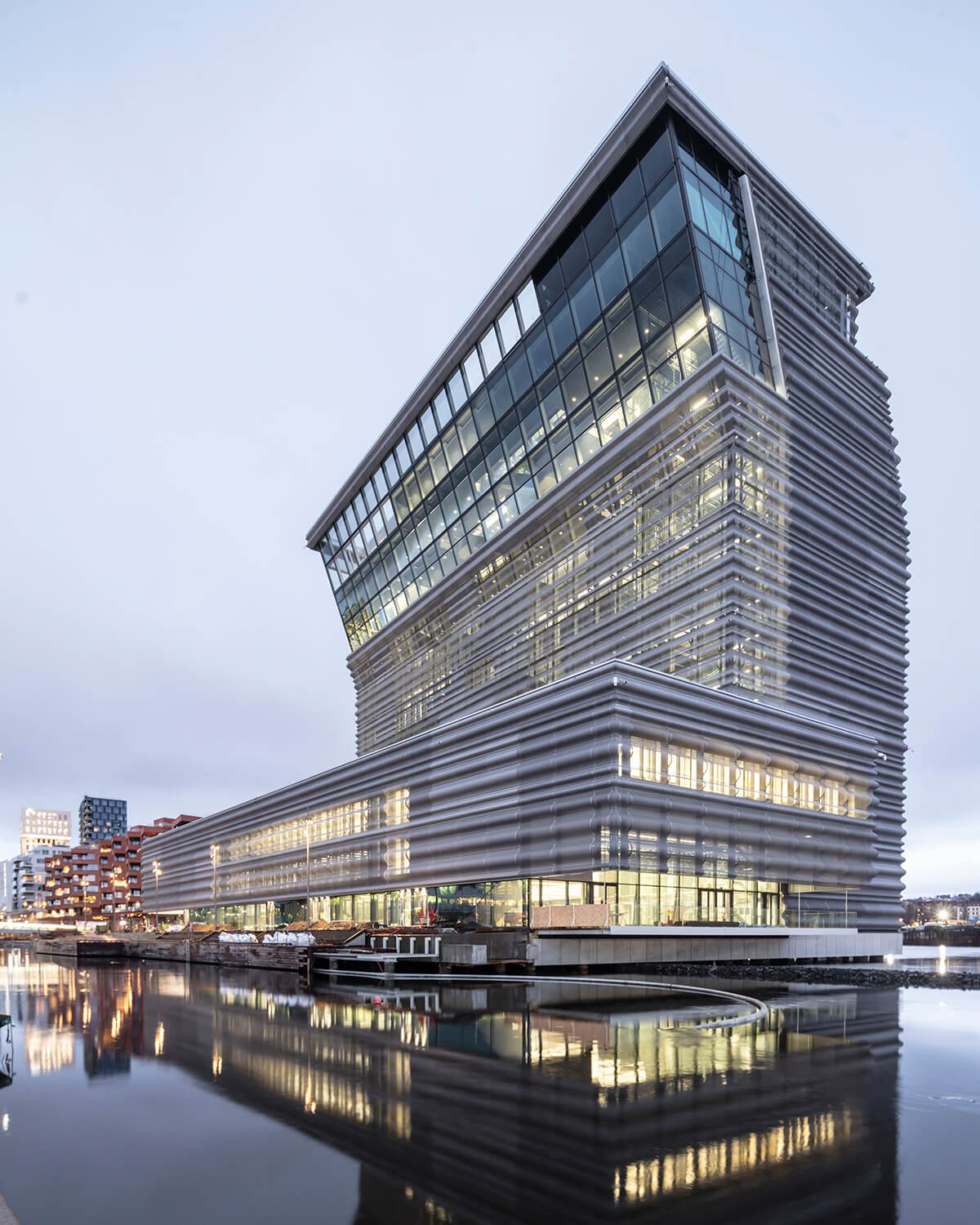